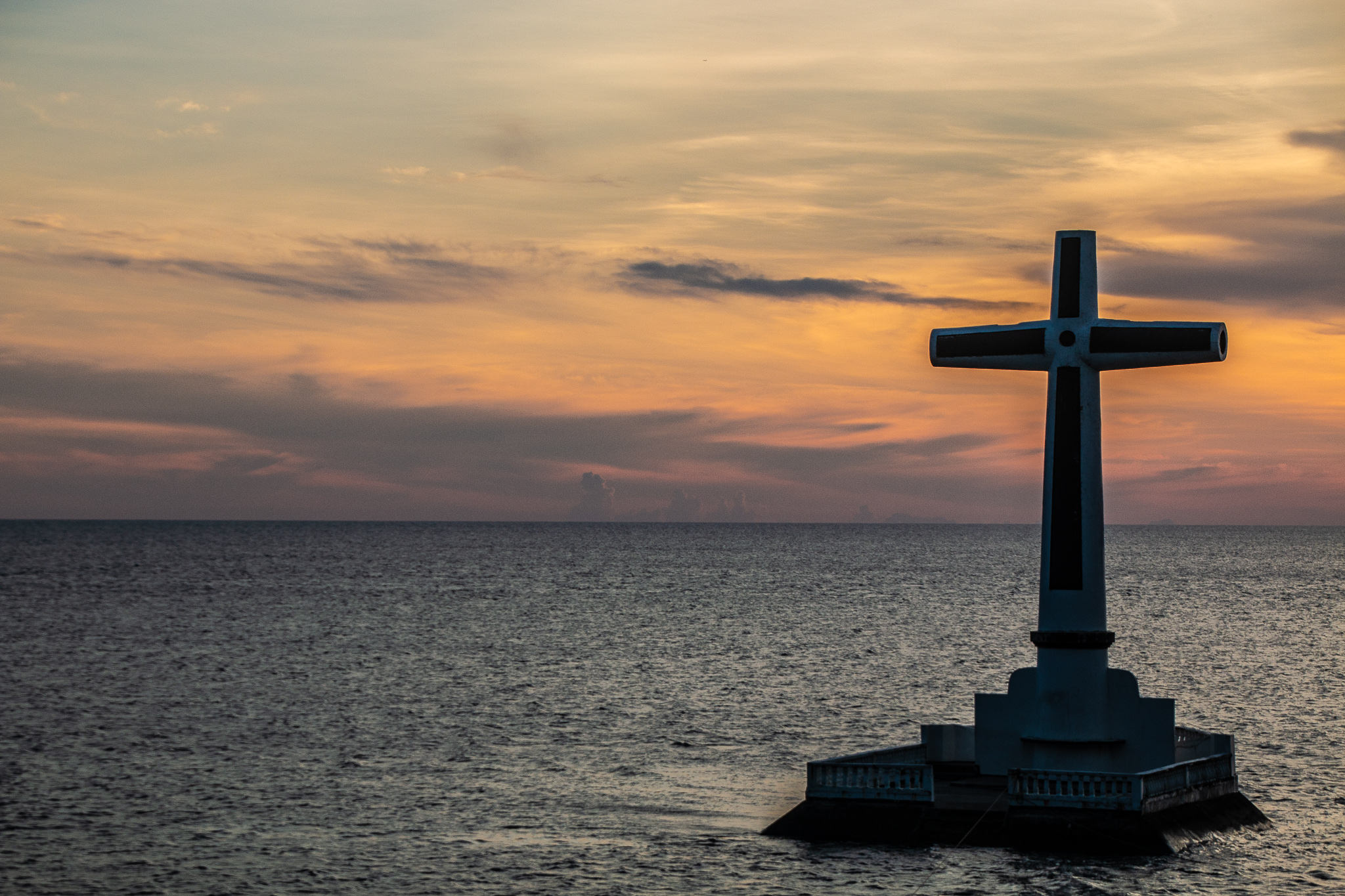 As the ferry edged ever closer to Camiguin Island and the Sunken Cemetery I was in search of, the towering volcanic peaks began to cast their long shadows over the ocean ahead of me.

This is the Island Born of Fire, a volcanic piece of rock in the ocean between Bohol and Mindanao, that’s just 60 kilometres in circumference but which has a violent history of fire and brimstone that has shaped the very land I was now looking at and that has for centuries defined the lives of the people who call it home.

Those volcanic peaks have erupted many times in the past. I was to spend the next few days in their shadow, just as the locals live their lives under the volcanoes, and I was to see just how this island has been shaped by fire when I travelled to the Sunken Cemetery. 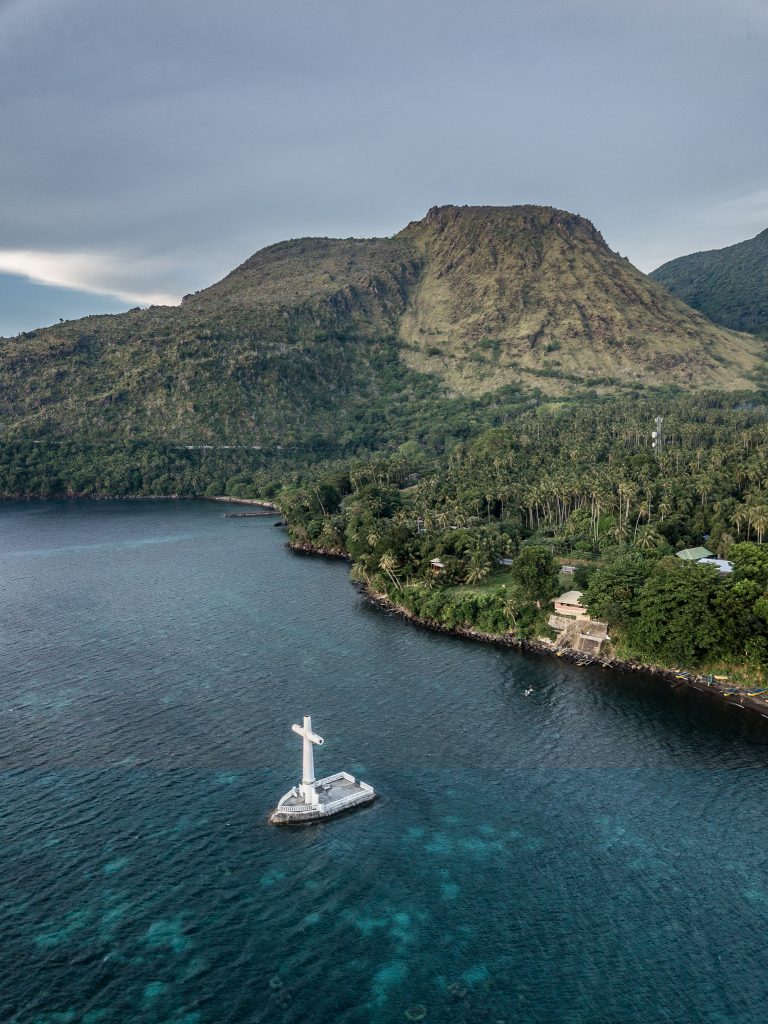 Camiguin, The Island Born of Fire

After arriving into the small port of Benoni on the eastern side of Camiguin after travelling on the ferry from Northern Mindanao, I made my way around the island’s solitary main road towards the western half, a short journey, but a journey where I never lost sight of the swirling mists that seem to perpetually shrowd the peak of Mount Hibok-Hibok in mystery.

Mount Hibok-Hibok is the tallest and most distinctive peak on the island, an active volcano that has reared its fiery head many times in the not so distant past. The last eruption was in 1951 when a devastating lava flow killed 3000 locals.

As sad as the story is, the 1951 eruption was hardly the most devastating of eruptions either, at least not to the surrounding landscape. Years previously, in 1871, Mount Hibok-Hibok erupted and didn’t stop erupting for four long years.

The eruption destroyed much of the town of Catarman that had been built in its shadow and the local cemetery subsided into the ocean until it came to rest below the surface of the water.

It was this Sunken Cemetery that I was here to see. 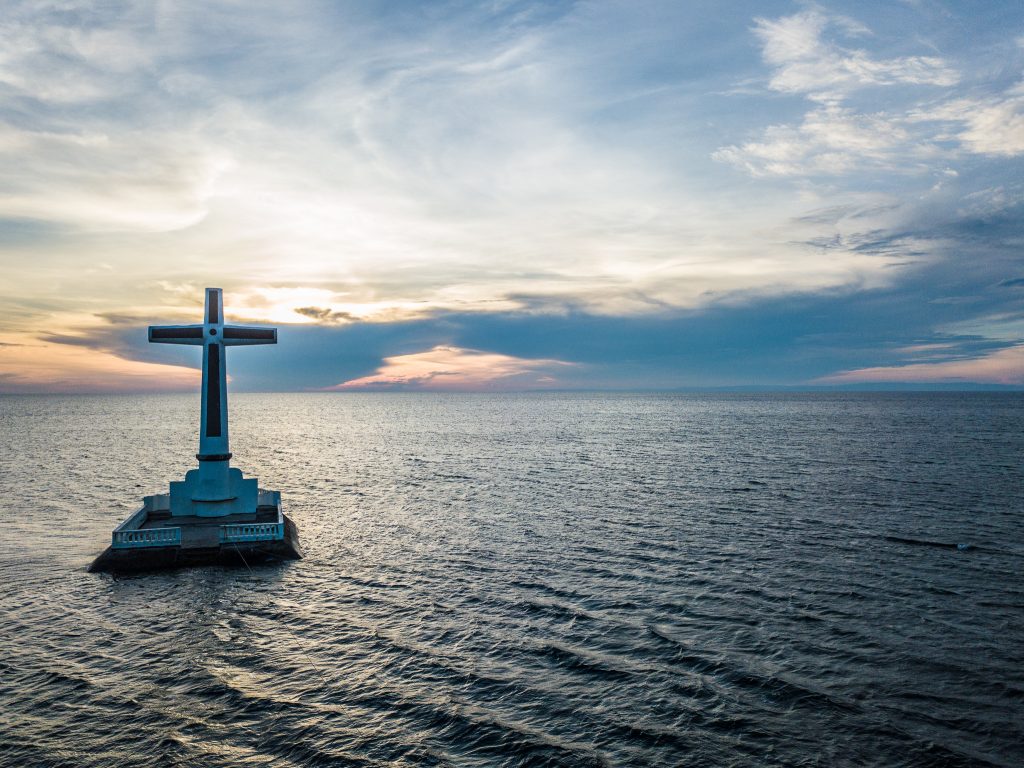 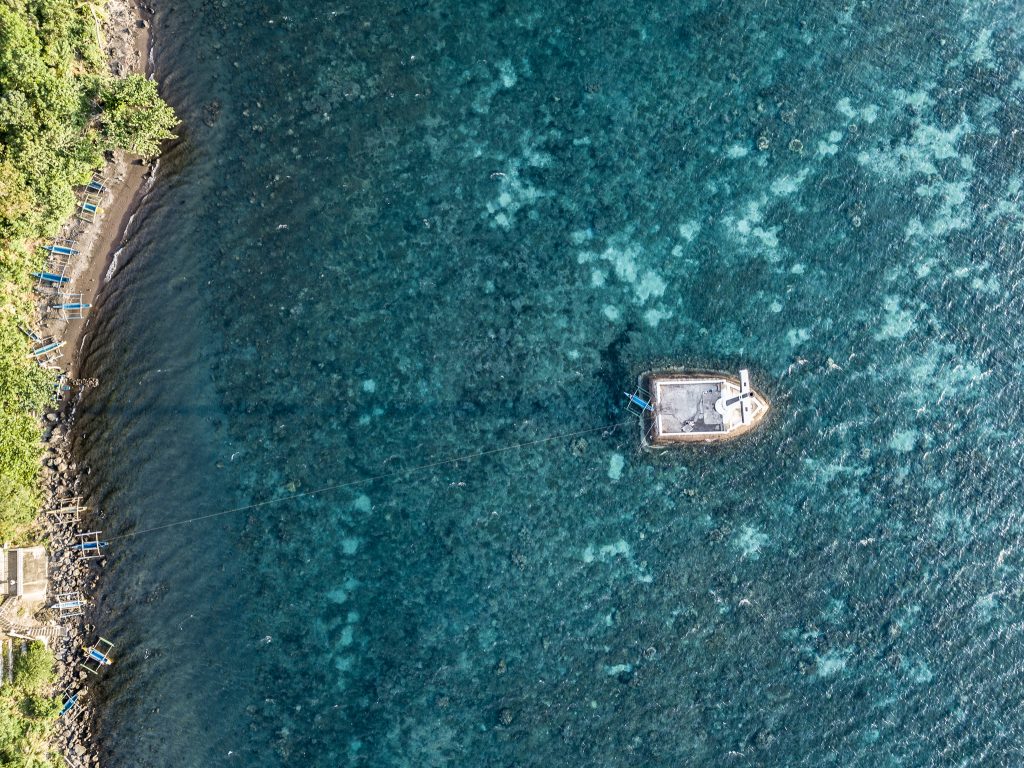 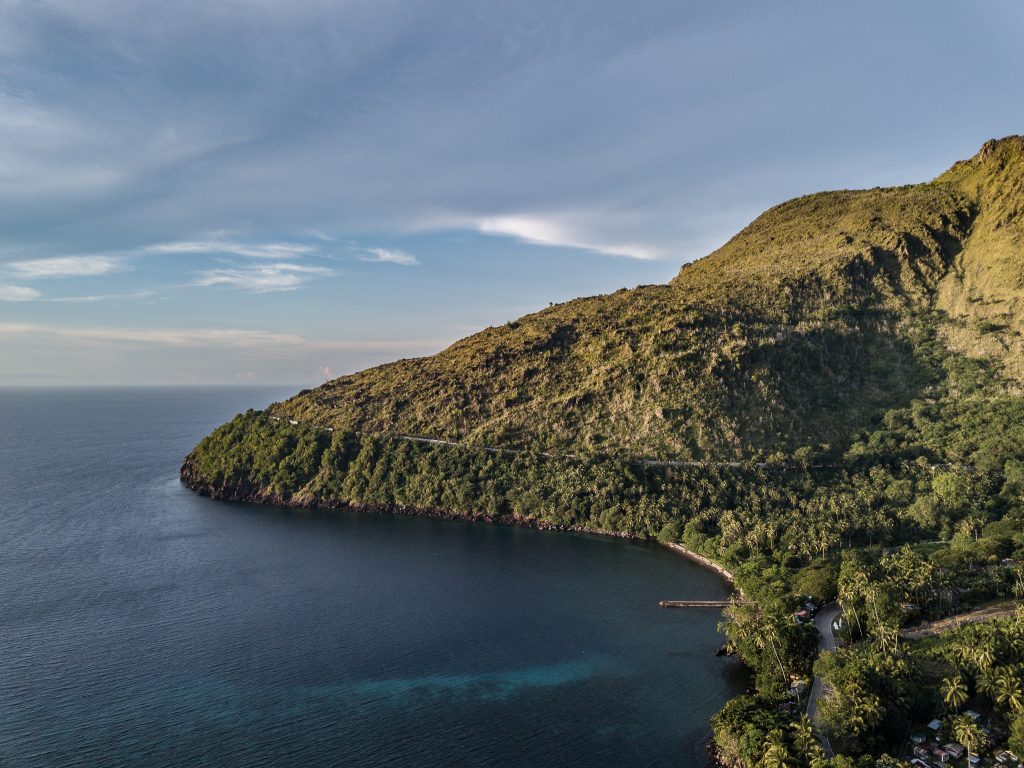 Camiguin: The Island Born of Fire

The locals call their home The Island Born of Fire because as even their only very recent history proves, Camiguin could again be at the mercy of its volcanoes. Mount Hibok-Hibok is part of the active Pacific Ring of Fire, and it’s very much possible that it could erupt again, causing destruction and reshaping the landscape further.

South of the Mount Hibok-Hibok crater, there’s another, newer volcano. This distinctive second peak is not as tall, and it was formed by the same eruption that sunk the cemetery and destroyed Catarman, the island’s old capital.

The eruption of mounds of lava created the cone as it burst out of the side of the mountain and then rapidly cooled. Camiguin is literally an island that is constantly in flux, that is constantly being shaped and reshaped by the tremendous geological powers that hold it in its grip.

Before I had even seen the Sunken Cemetery at Catarman, I was already beginning to see why the locals called Camiguin The Island Born of Fire. 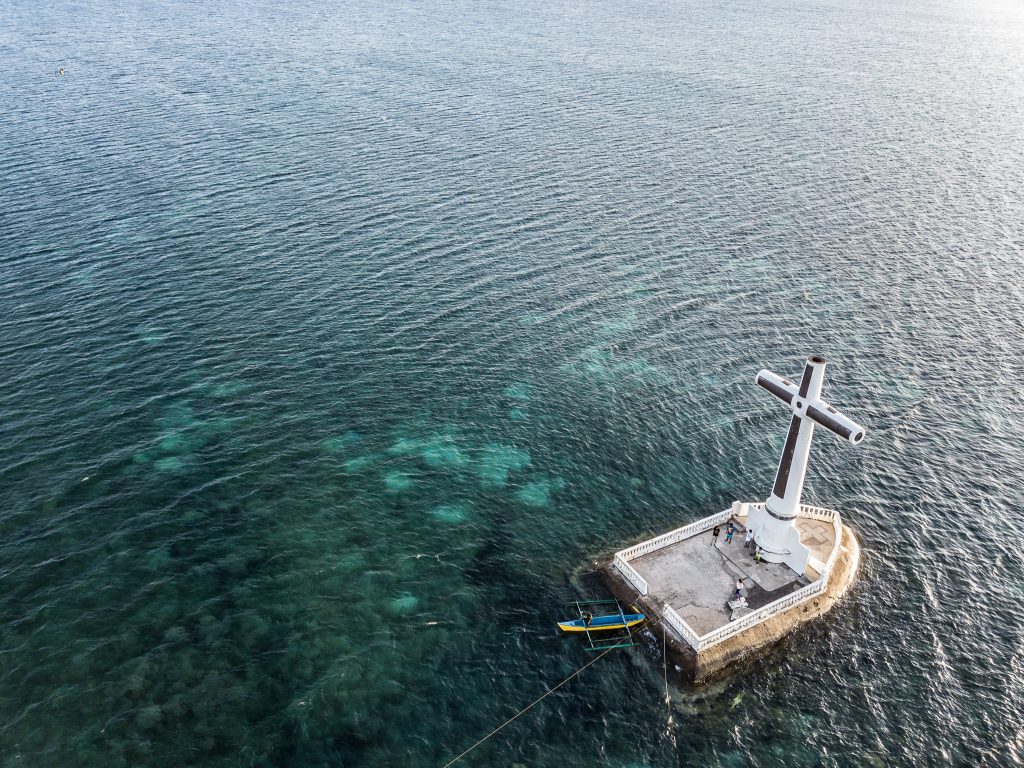 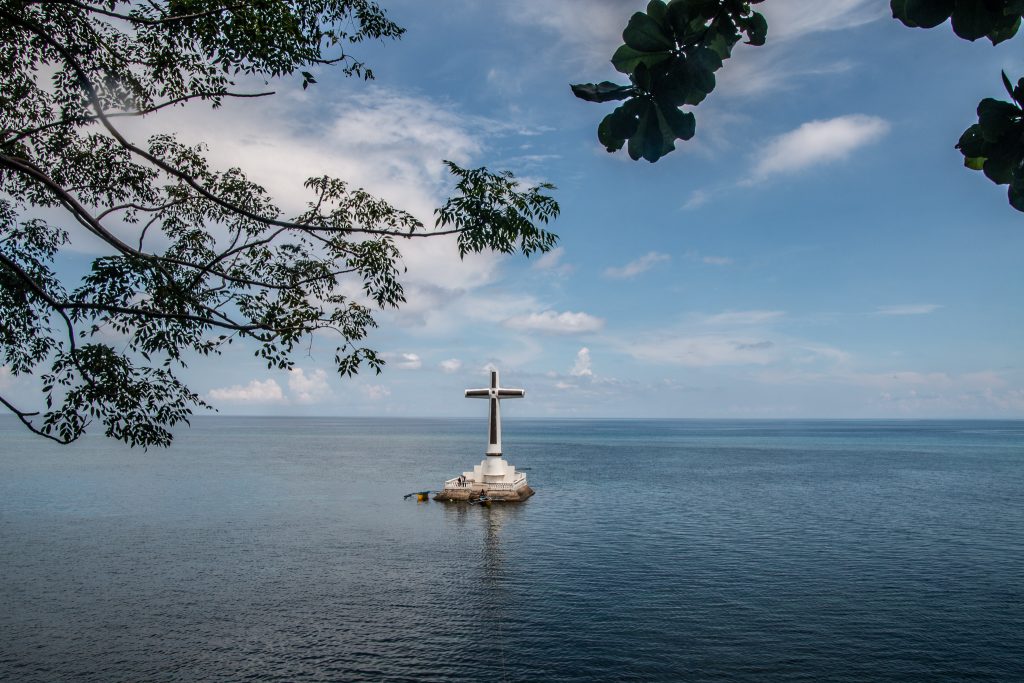 The Holy Cross of the Sunken Cemetery

I was travelling along the rugged, dramatic coastline. Between the two volcanic peaks, as I rounded a sharp turn, through the green trees I saw the strange shape of an enormous cross rising from the water a few hundred metres away from the shore.

This was the holy cross that marks the position of this underwater cemetery.

Anyone that has ever travelled to the Philippines will understand that Filipinos – no matter the religion they adhere to – tend to be quite religious. On Camiguin, on an island where to live means to live in the constant shadow of the volcanoes, it’s no surprise really.

The locals constructed this huge cross out in the water, to rest over the graves of their ancestors who were swept into the sea during the 1871 eruption. Not only did that eruption create a new mountain peak and destroy the largest town on Camiguin, but it forced the local cemetery underwater.

Now, in a dramatic scene, out on the water I could see this towering cross, not just a marker of remembrance to the graves lost to the sea, but a reminder of the fragility of life on this everchanging island.

That’s why I had wanted to travel here, not just for the novelty of the unusual sight, but to gain a glimpse into the volcanic past and volcanic future of Camiguin. If I returned in fifty years, would this island still look how it did now? 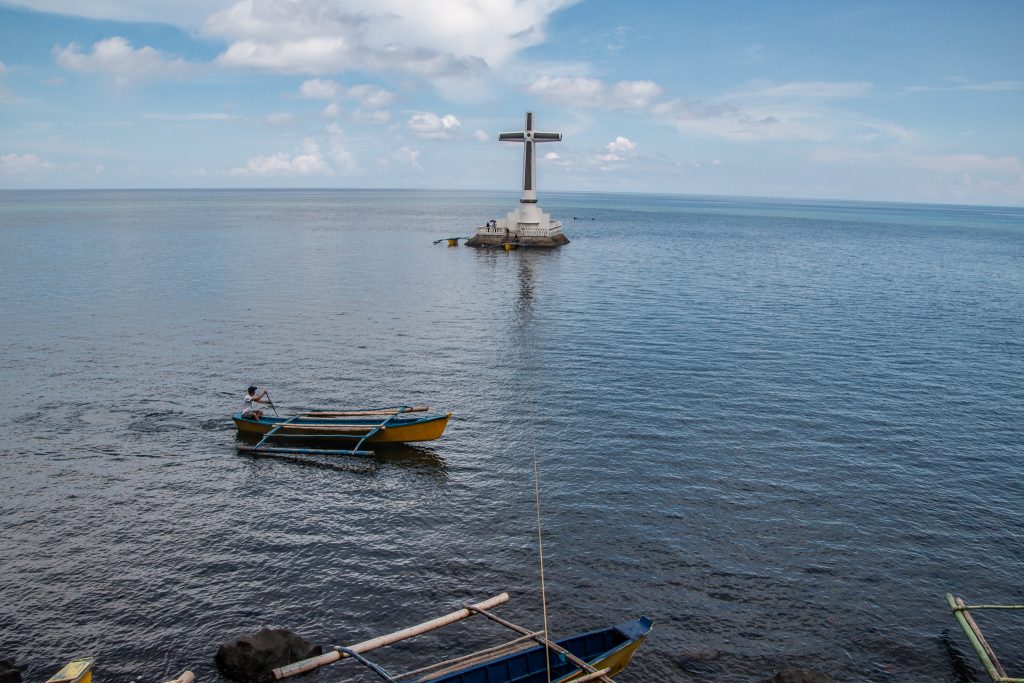 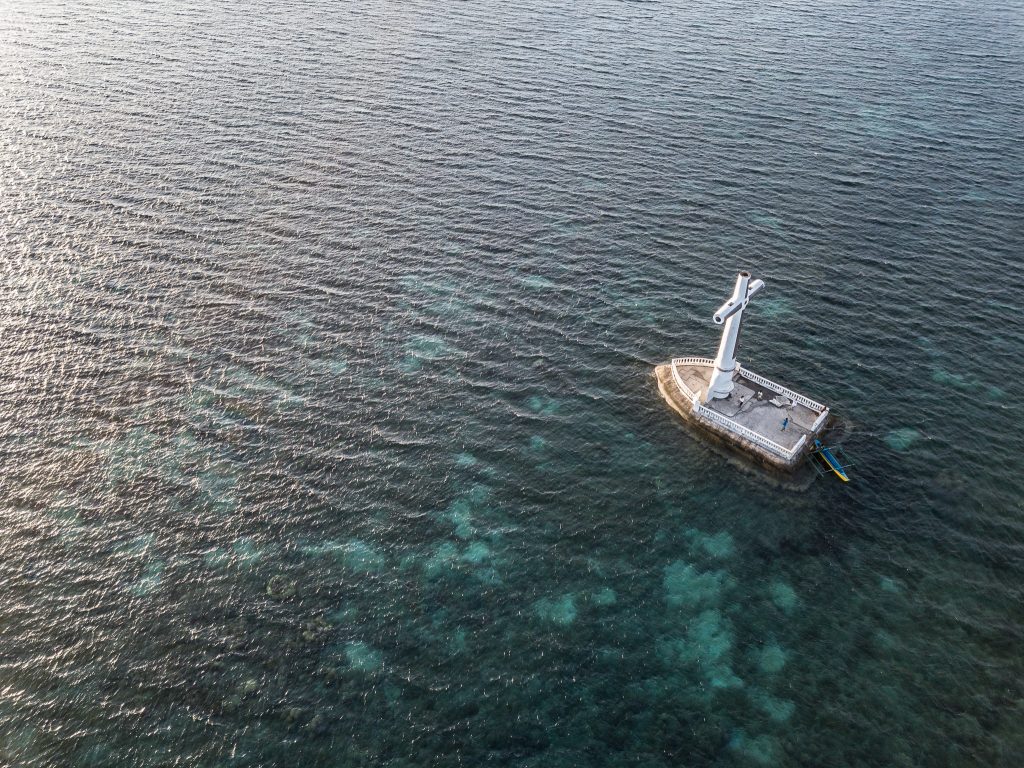 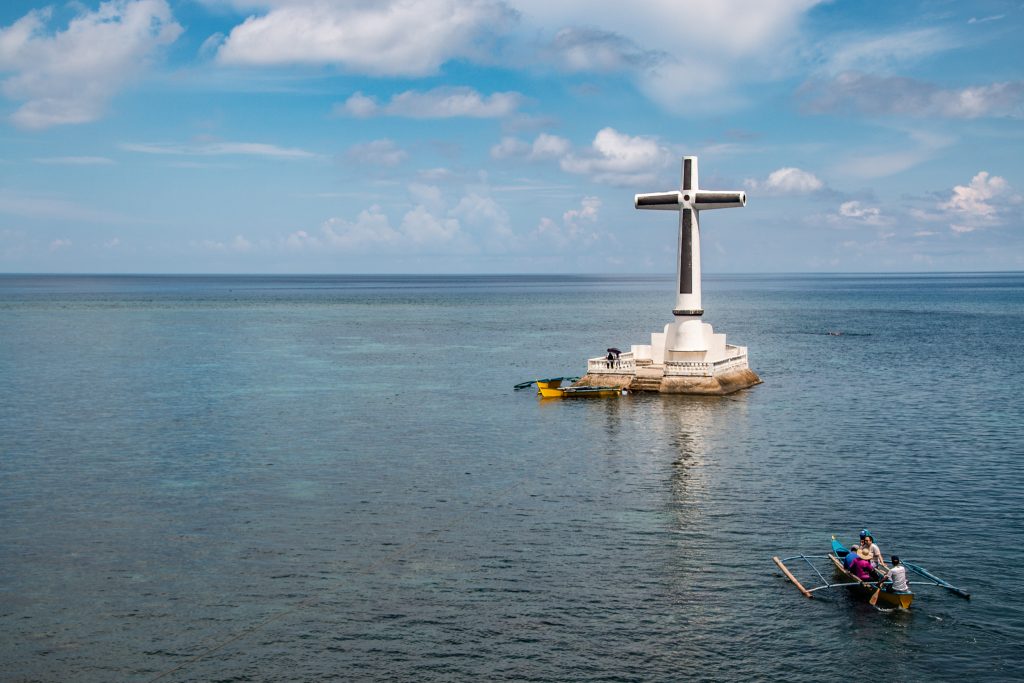 The Ruins of the Catarman Church

Just a short walk down the road from the Sunken Cemetery on Camiguin was the equally impressive yet somewhat less dramatic ruins of the old Catarman Church.

The Spanish, during the colonial days, constructed the church here at the sight of old Catarman, once the largest town and centre of life on the island. Known now to the locals as the Gui-ob Church Ruins, these abandoned walls and broken buildings are all that is left of the former town.

The same eruption that sunk the nearby cemetery wiped the town of Catarman, which had stood here since the 17th century, off the face of the island. Literally. Much of the church was destroyed but the strong stone walls survived in a battered state but were then abandoned as the Spanish rebuilt elsewhere, leaving the ruins of their church and the Sunken Cemetery as the only lasting reminders of what had once stood here before. 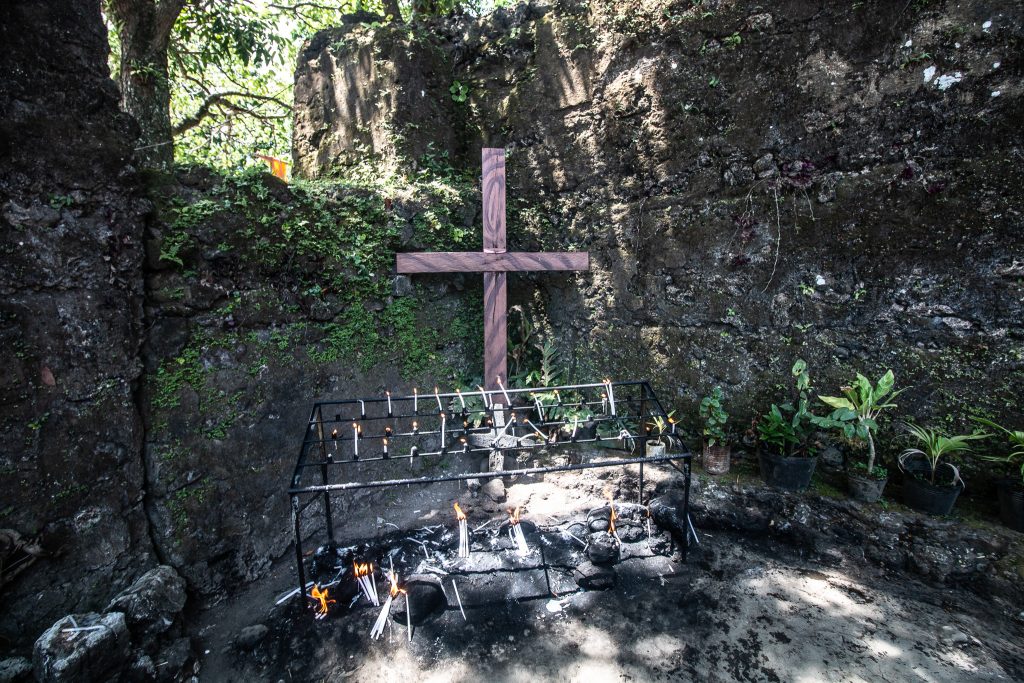 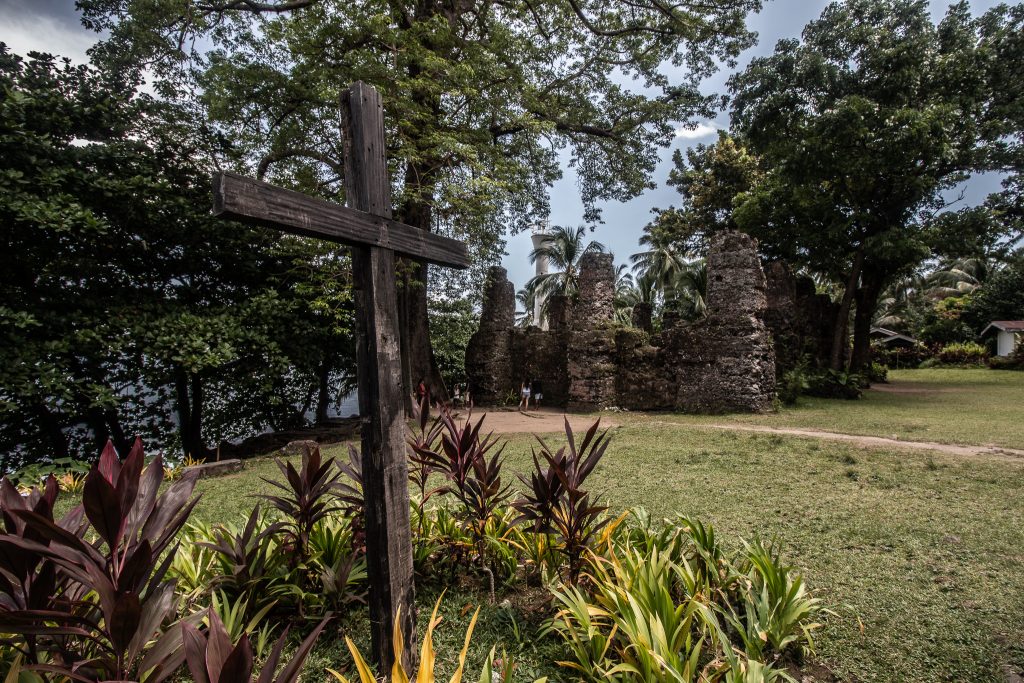 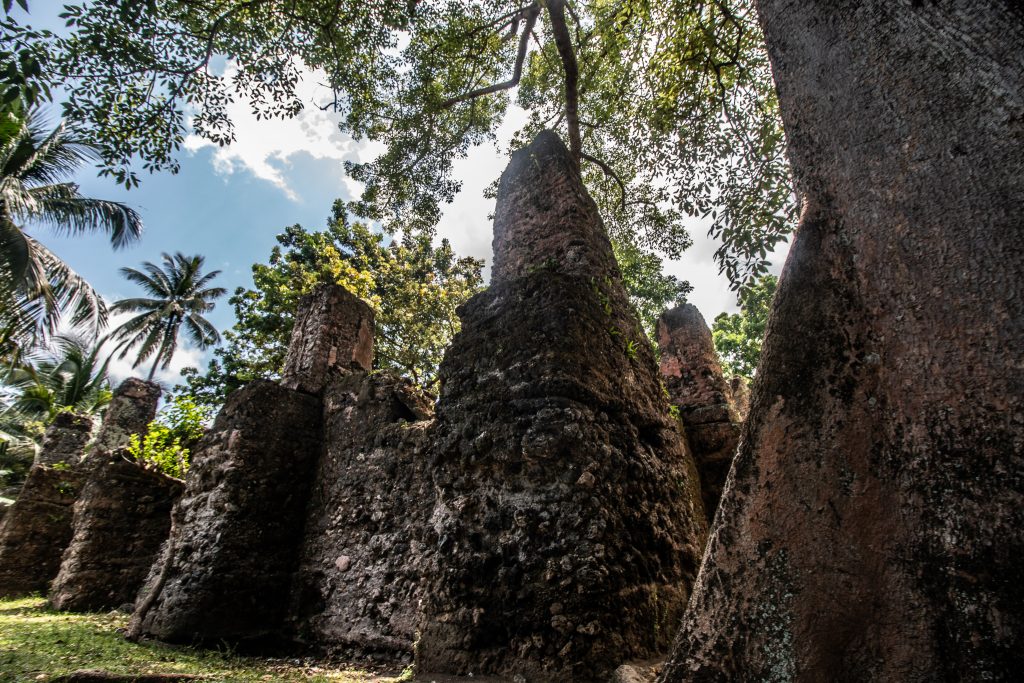 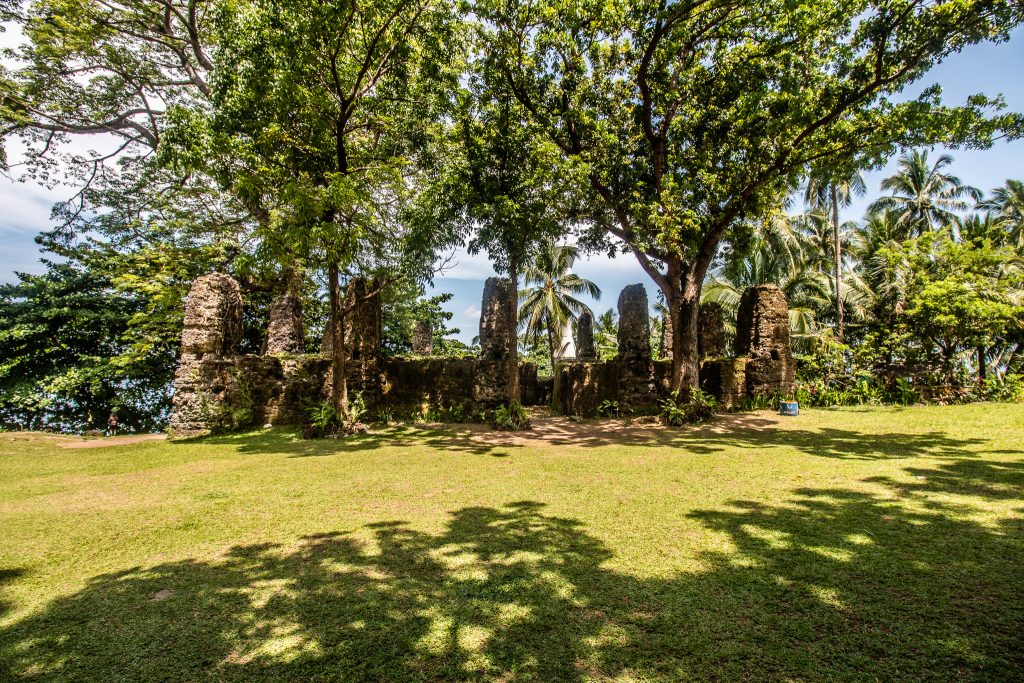 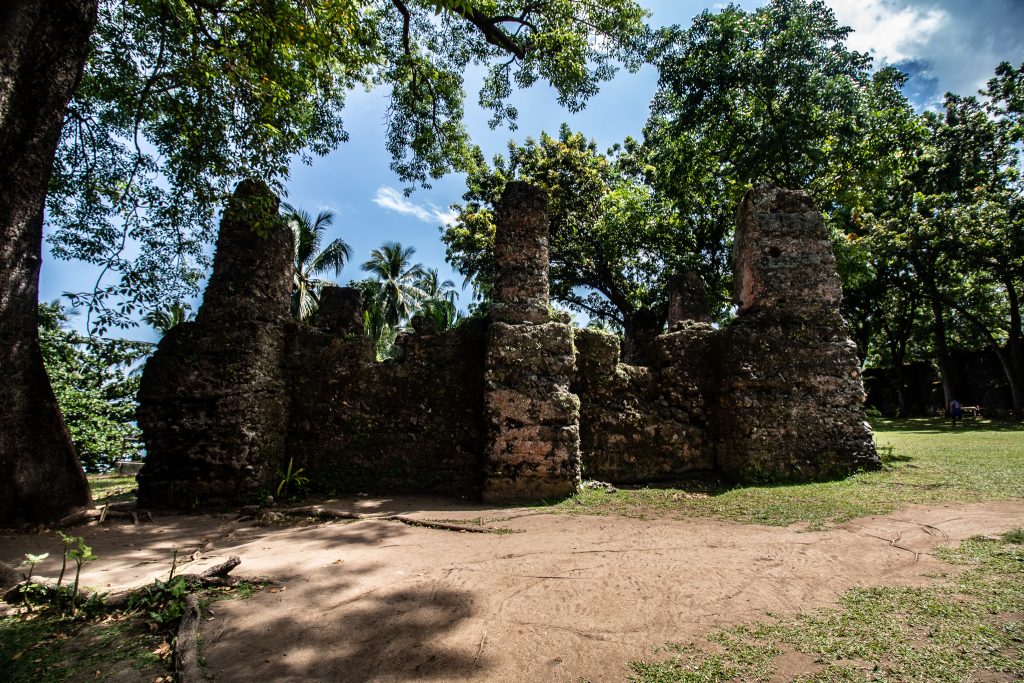 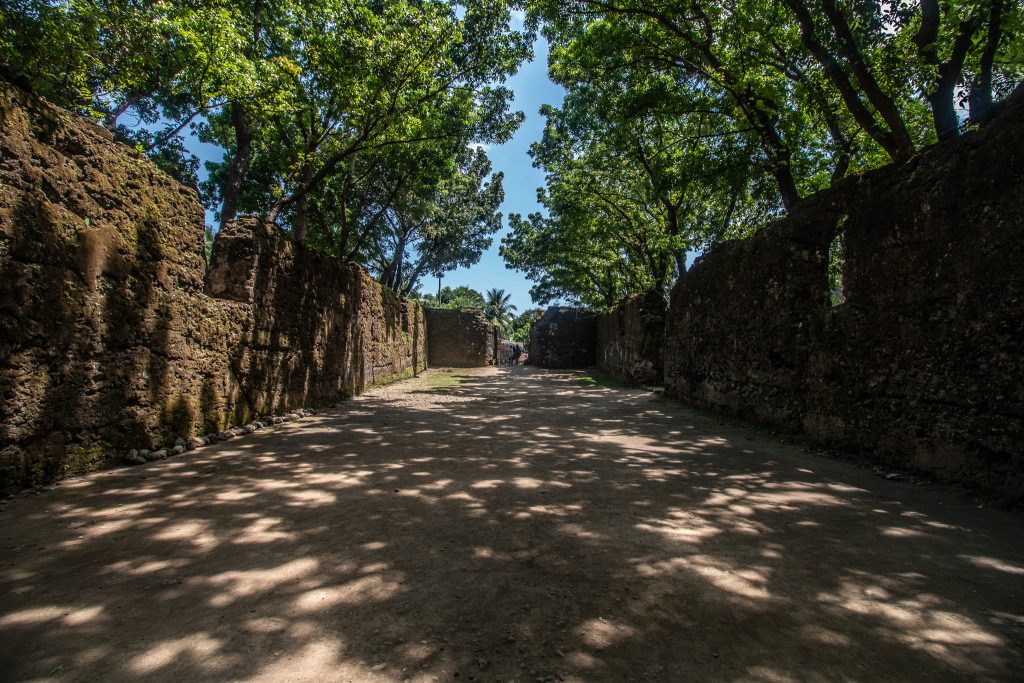 The Sunsets Over The Cross

I returned back to the Sunken Cemetery as the sun was setting over the western side of the island, creating an eery mix of dark clouds and bright colours in the sky.

Even the sunset was screaming fire in the sky. As I looked out over the cross on the water, I was aware that the volcanic peaks were right behind me, shaping the very land that I was standing on.

This was Camiguin, and I understand now, why they call this The Island Born of Fire. 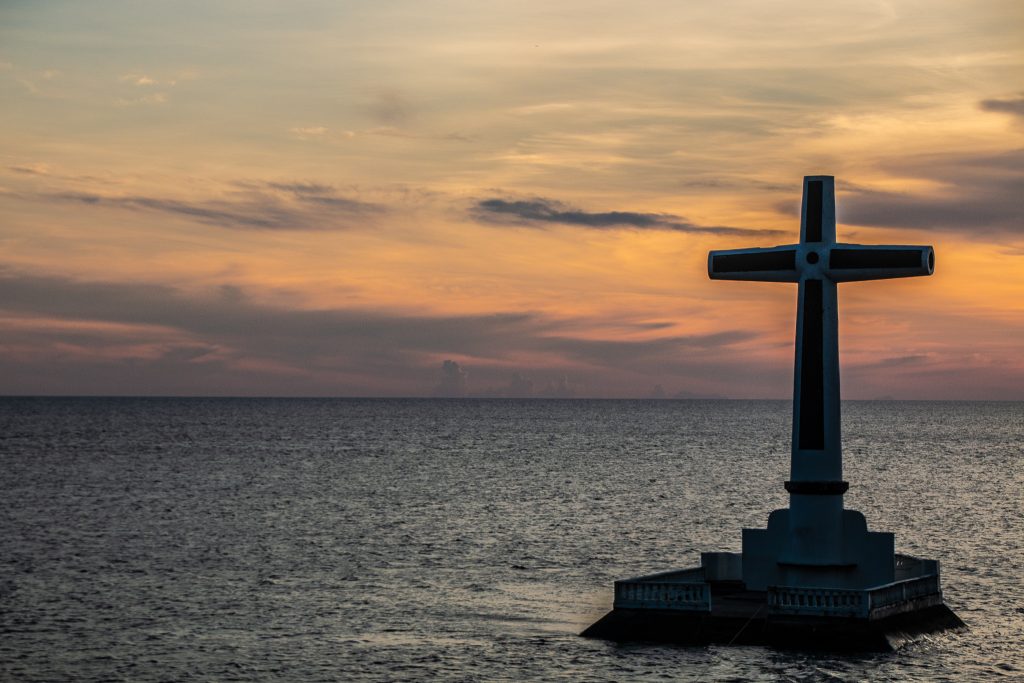 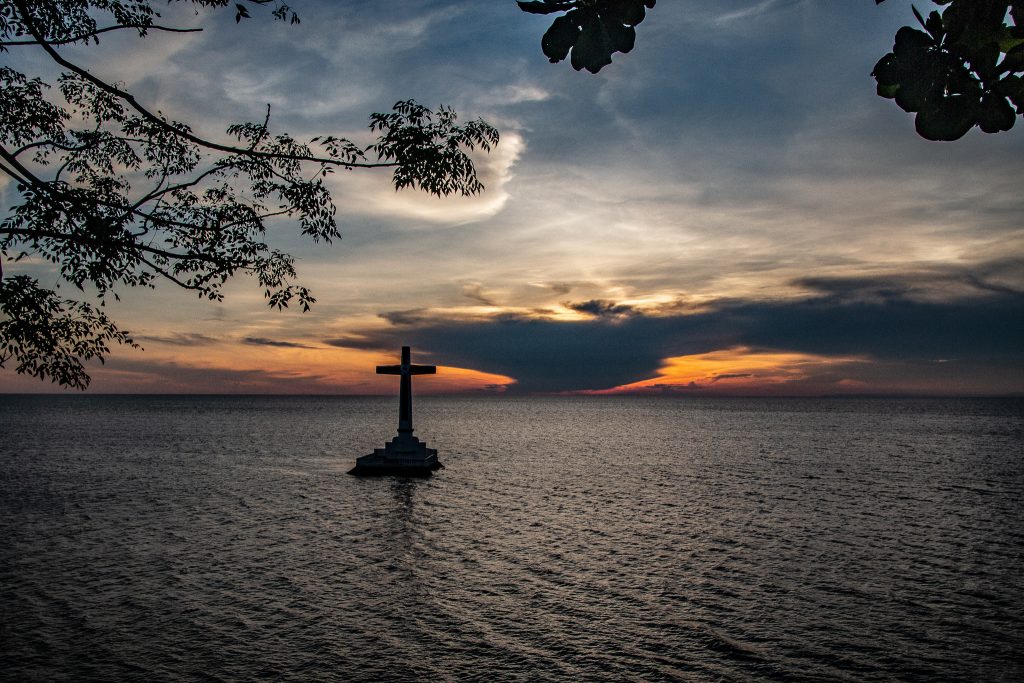 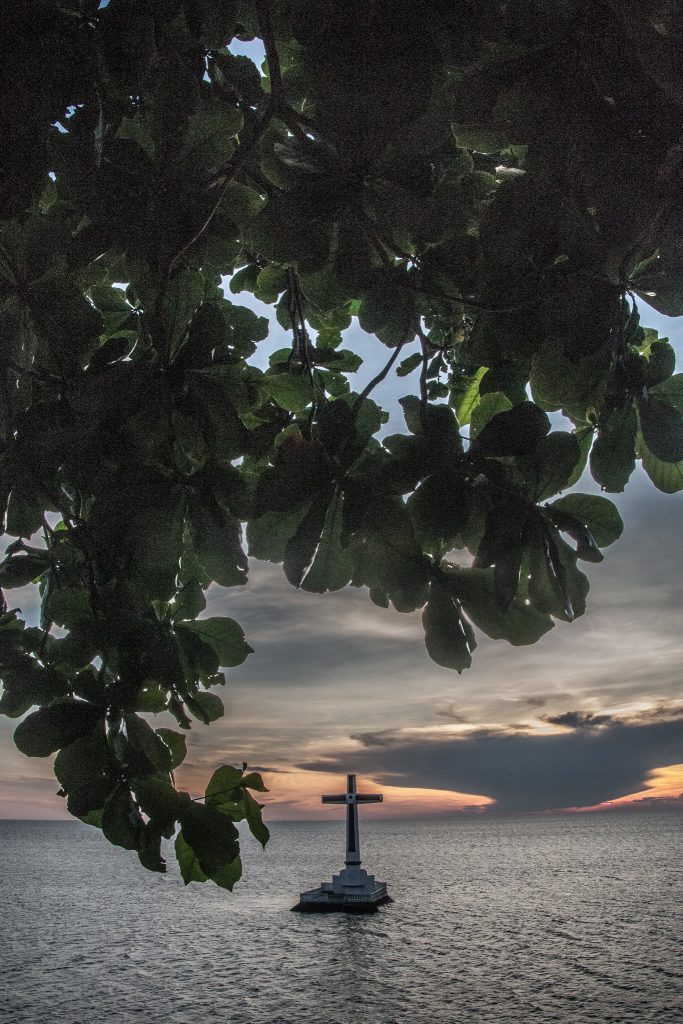 The Sunken Cemetery is found off the west coast of Camiguin Island. The closest village is now Bonbon after Catarman was relocated in the wake of the 1871 disaster that destroyed this side of the island. It’s possible to take a Jeepney here, however it may be easier simply to hire a motorcycle or to hire a driver or tricycle to take you.

From the main town of Mambajao, it is only a half hour drive to the Sunken Cemetery. I hired a moped for the day for around 500 PHP from my hotel. Entrance to the viewing area is free and there are several souvenir shops selling local goods. There are a few boatmen who are happy to take travellers over to the base of the cross, where it’s actually allowed to snorkel amongst the tombstones beneath the surface. They charge 300 PHP return. It is not a long journey, just a short hop. I decided not to do this as I felt slightly uncomfortable snorkelling amongst the graves, but looking back, I suppose it’s really no different to walking amongst gravestones on land… I’ll leave that to you to decide.

The ruins of the old Spanish Church are just down the right to the south of the Sunken Cemetery and they are also free to enter, although you can leave a donation or light a candle. There are a few walls and buildings still standing and it’s an impressive, historical sight to walk around.

Location of the Sunken Cemetery on Camiguin Island

As well as visiting the Sunken Cemetery and the ruins of the old Spanish Church, if you are really adventurous it is possible to actually hike to the crater of Mount Hibok-Hibok. I didn’t have time to do this, but there are several guides on the island who can help you. You will need to plan in advance, as it’s required to apply for and be granted a permit to hike to the top, so in bad weather, this will not be granted. The permit must be applied for in Mambajao. The tourism department can help with this. The top is constantly surrounded by mist and I was told by locals that it’s a good 3-4 hours return, with an elevation of over 1000 metres.

An easier walk, that requires no planning, guides or permits, is the Walkway to the Old Volcano. This is a stone stepped walking route, the entrance to which is found north of the Sunken Cemetery. There are elaborate Stations of the Cross leading upwards and really it’s another part of the island’s remembrance of the volcanic disasters that have befallen them in the past. It’s a confusing name, as the Old Volcano Crater, is, in fact, the newer Mount Vulcan. If you know why this is the case, I’d love to hear from you in the comments!

Disclaimer I was hosted by Medano Island Resort as part of a complimentary 3-night stay on Camiguin Island.