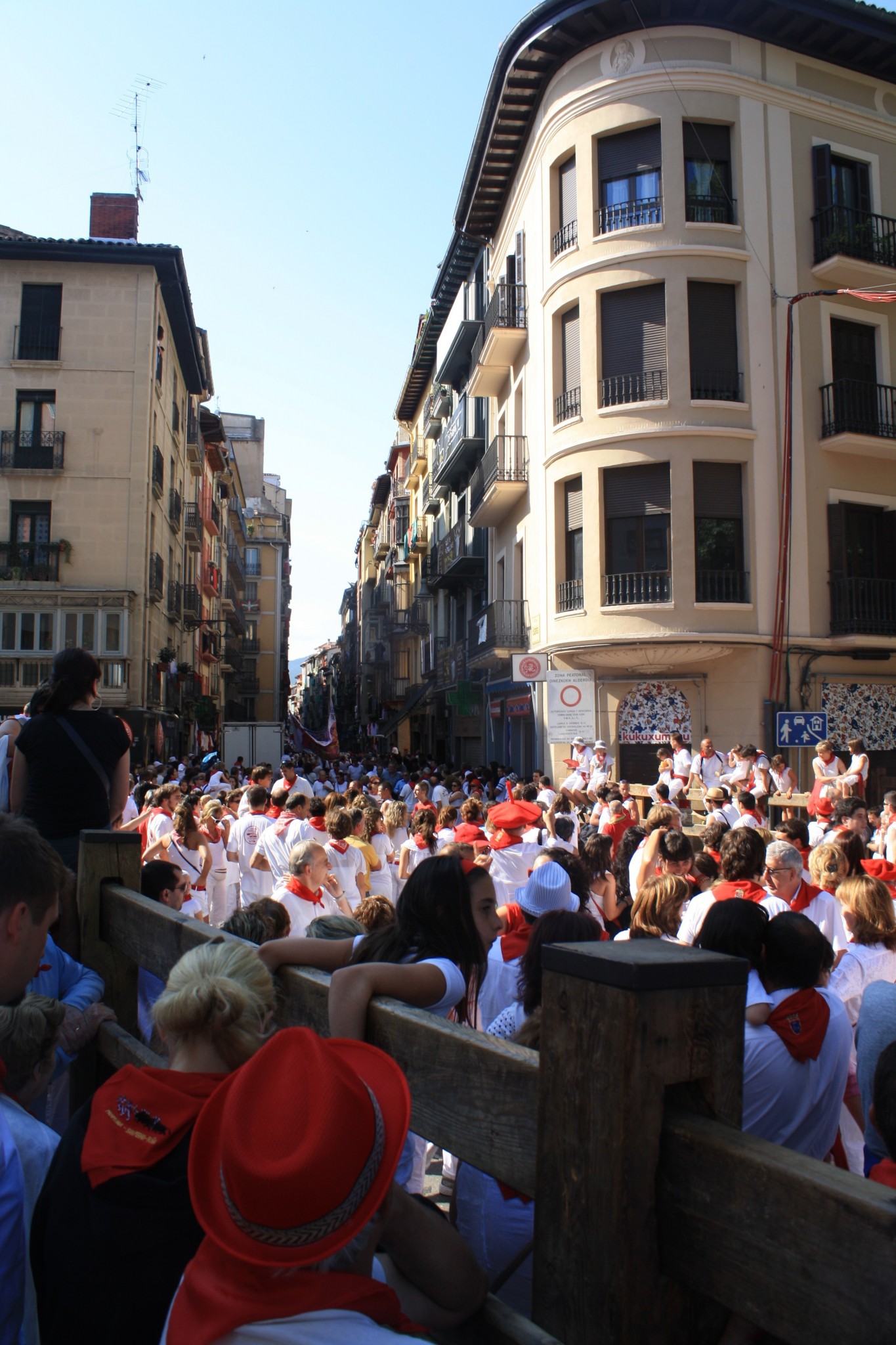 Pamplona, the running of the bulls, that mad death defying experience on every traveller’s bucket list.

I went to Pamplona in the summer and I can tell you the street parties are mental, you’ll probably get robbed and you’ll definitely be bleeding sangria from every orifice by the end of it. So the following is what befell me at La San Fermin festival, 8 days of carnage, brutality and excess.

It was early when I arrived, but these guys were on it already and doing it right. That’s a portable drink dispenser filled with whiskey and coke… 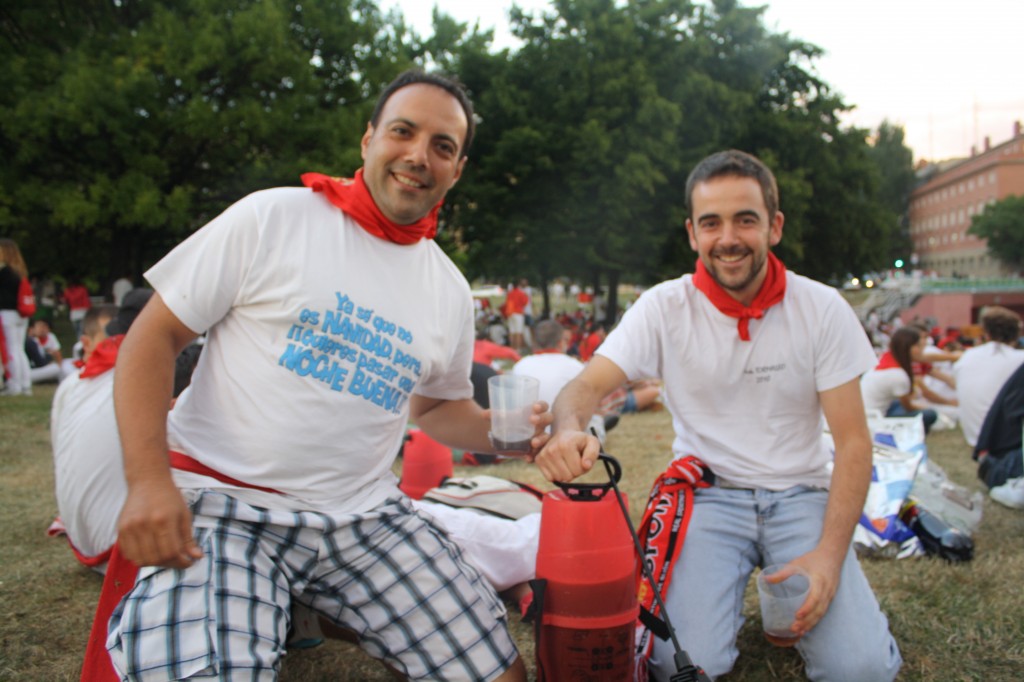 It wasn’t even midday, but hell, do as the locals do right? That’s a picture of me getting squirted by a Spanish man while his mate looks on proudly. 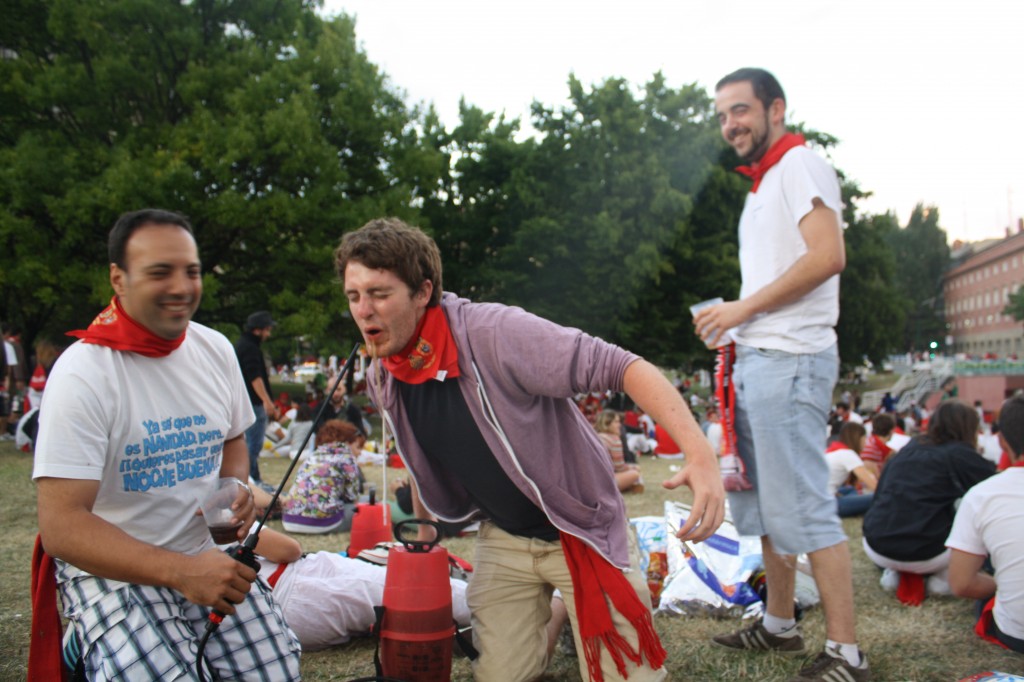 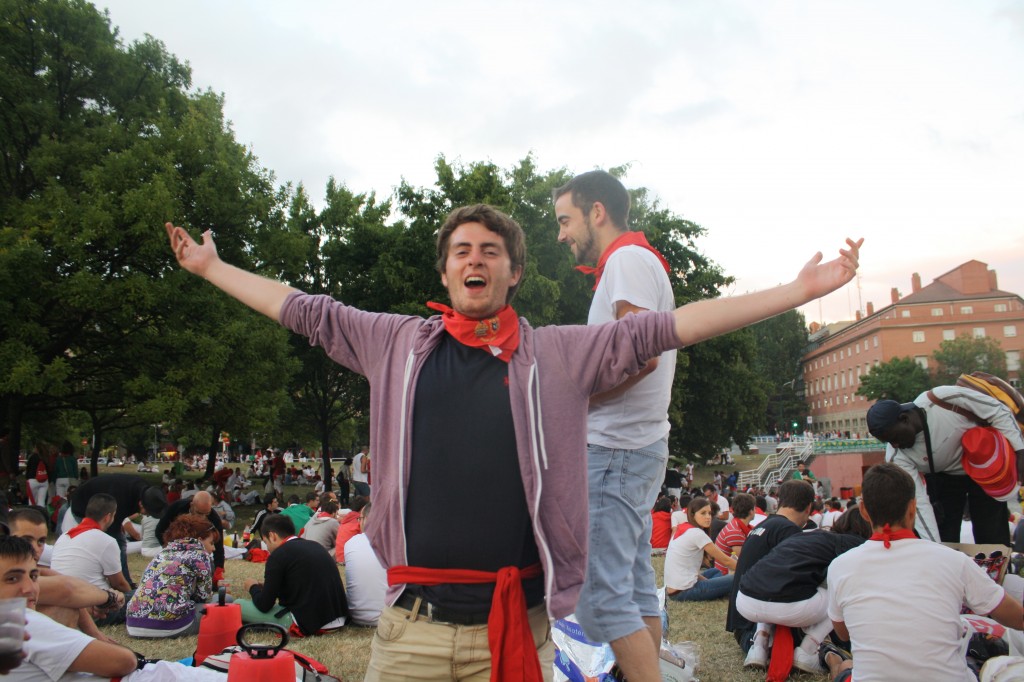 We didn’t want to sponge off these chaps all festival in an already declining Spanish economy so after some muchas gracias we headed off to source some cheap cheap sangria. When I say cheap, I mean 1 Euro cheap. And it’s actually rather fruity.

My friend decided it was for the best if he dressed in disguise for this one. I don’t really know what he was planning…but it seemed to make him more comfortable buying ridiculous quantities of drink in front of discerning locals. 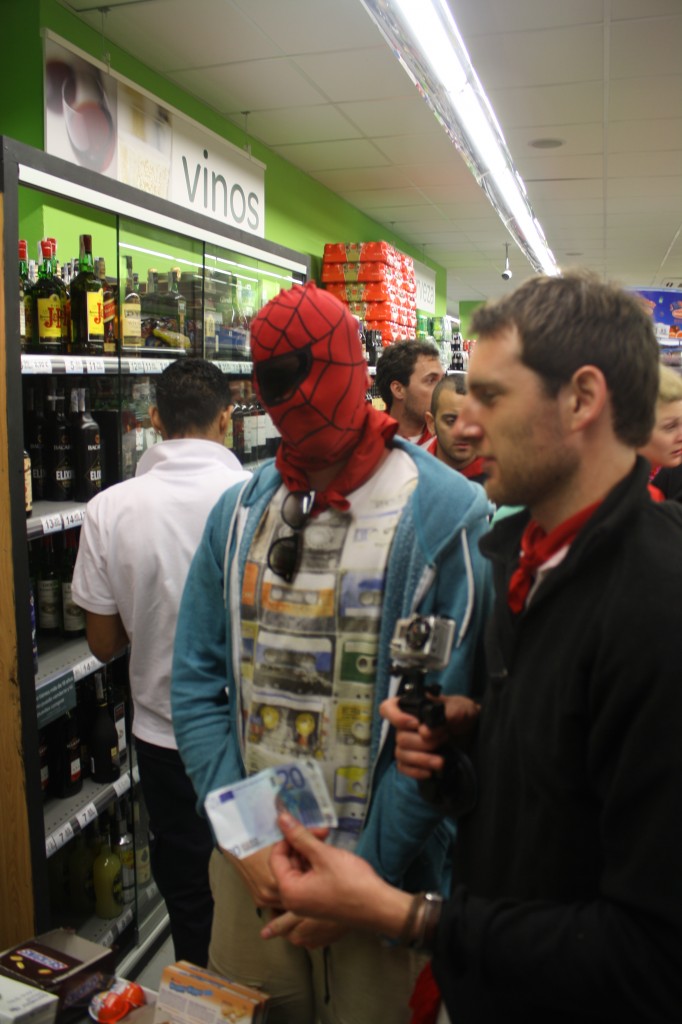 This picture sums up the festival, minus the bulls. 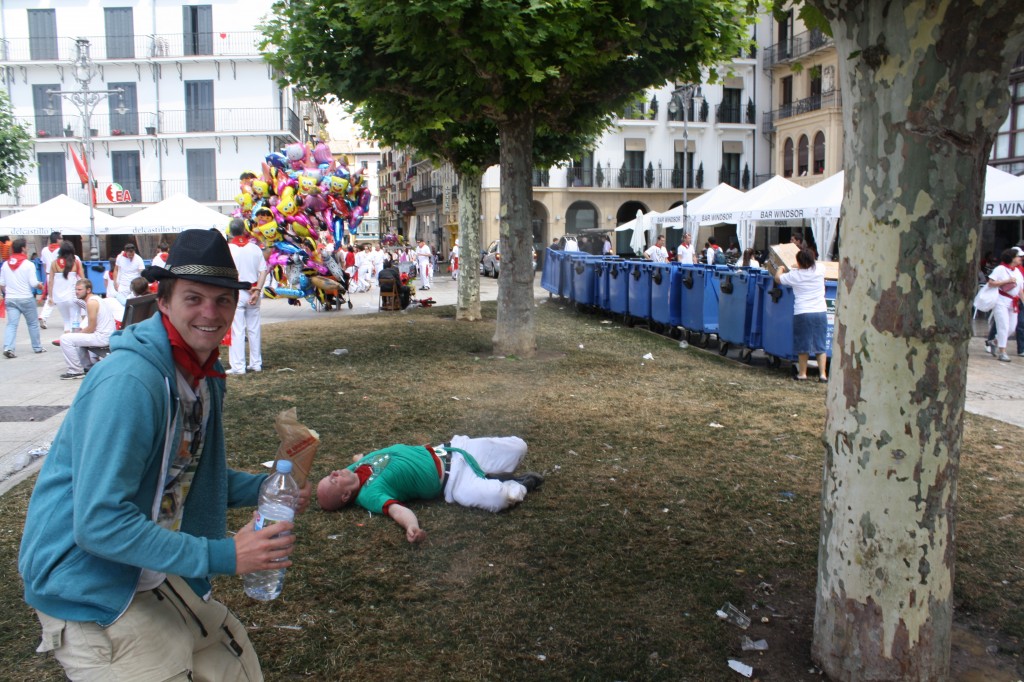 The whole city goes mad for this one, even the dogs. It was having a better time than the bulls were going to get though. 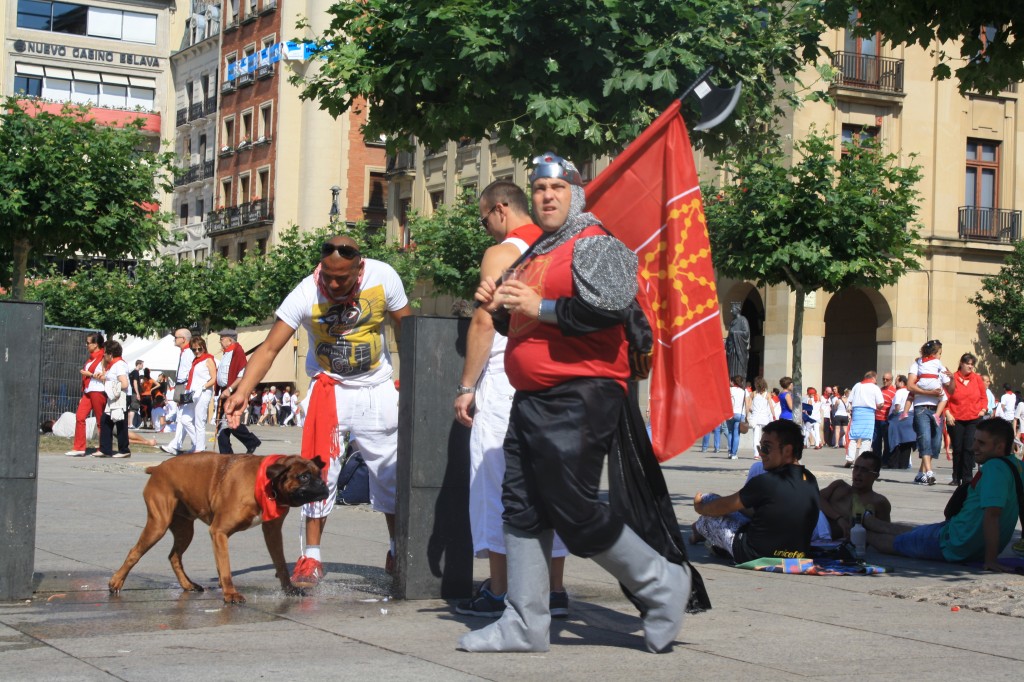 As night descended, the street was suddenly filled with screaming people. Fuck! My sangria distorted mind couldn’t figure out what the hell was happening. All I could make out were explosions down the street as the whole place filled with smoke. Maybe Basque freedom fighters were making a last ditch push for independence, maybe I was just drunk, or maybe PETA were running naked through the streets killing at will to save the animals.

No, shitting hell, a bull was charging up the street, fireworks strapped to its body, rampaging down the cobble stoned streets of Pamplona.

No! It was a man dressed as a bull with fireworks strapped to his body. Damn, this was all getting too much for me. I needed more sangria, clearly. 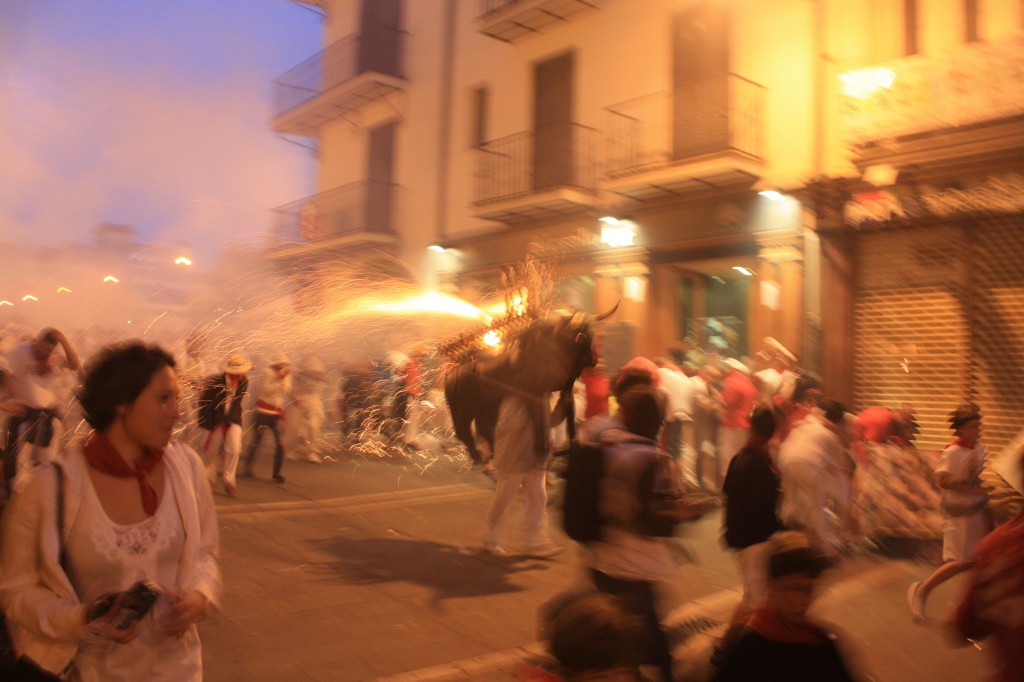 We spent the night partying and then slept in the only warm, free place available- the bus station. And by bus station I mean a bus parking bay. Waking up and seeing a pair of huge headlights hurtling towards you is by no means fun, but it’s an acceptable price to pay for the privilege of seeing people gored in the streets by bulls.

6am and we went to watch El Encierro, the running of the bulls. It’s the main reason we were there after all.

This guy didn’t know what the hell was going on. 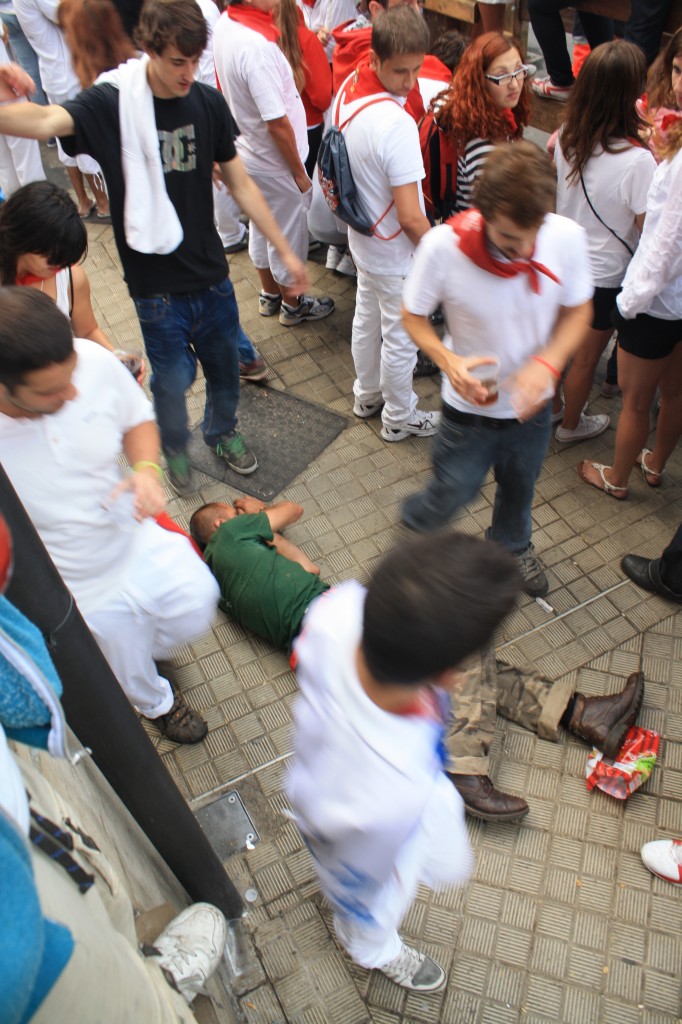 Hey look, finally a picture of some cows. 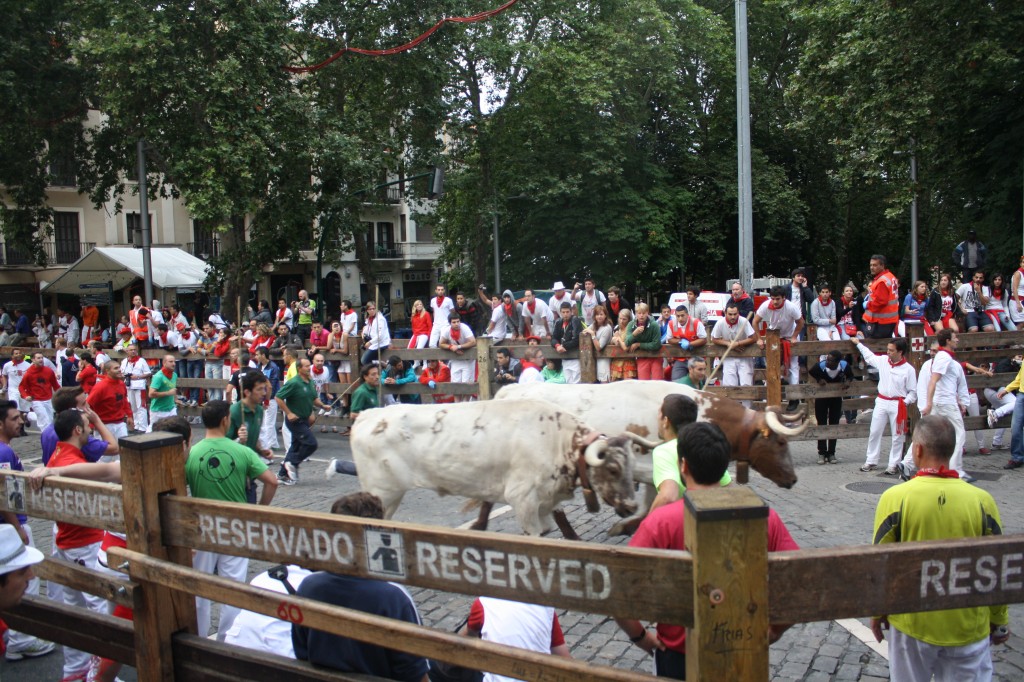 Now it was time to drink again. The bull fight was on later and I’d need all the intoxicants I could I could get my filthy tourist hands on.

The bull ring was packed to the rafters. The locals were baying for blood and copious quantities of sangria were being downed on every level. We had the cheap seats, in the sunlight with complementary abuse and bottles thrown at us. 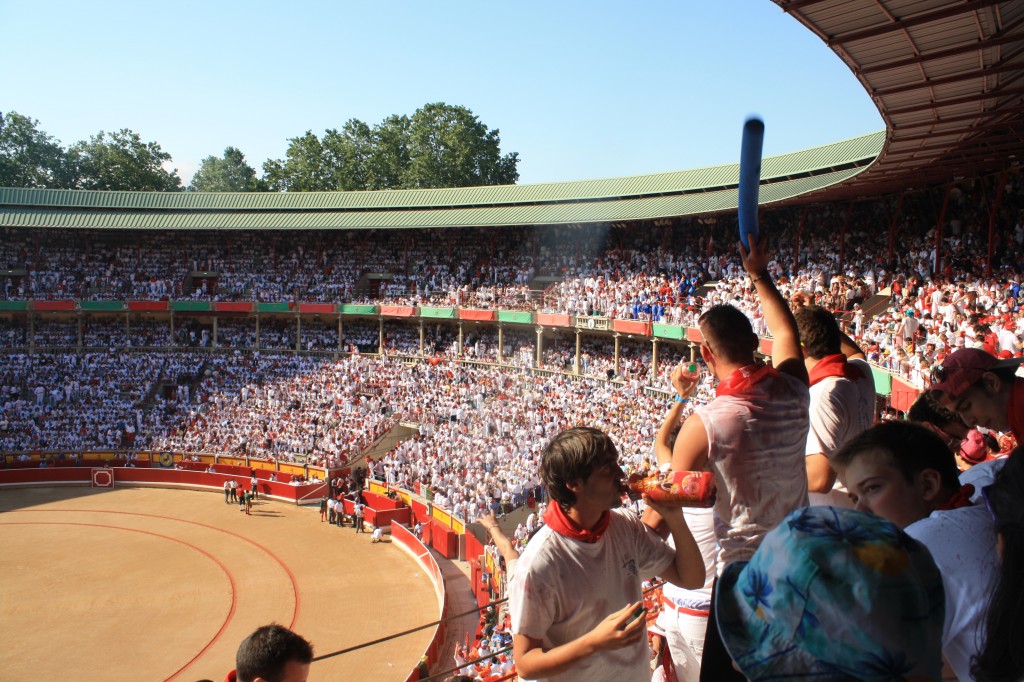 Looking back, the red butcher’s aprons these guys are wearing were pretty sadistic really. 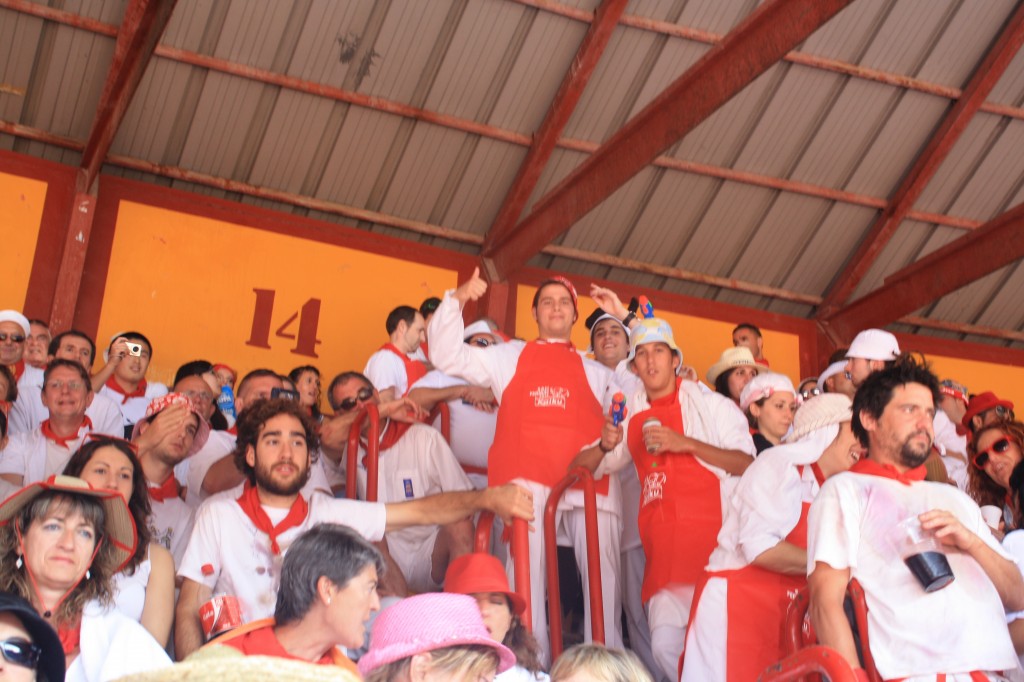 The bullfight, or La Corrida, kicked off in style, with screaming fans cheering every move from the Picadors, the guys on horseback with the lances. They weakened the bull with thrusts to the neck, before the Banderilleros came out to hook the animal with barbed sticks, all while competing for the crowd’s affection of course. 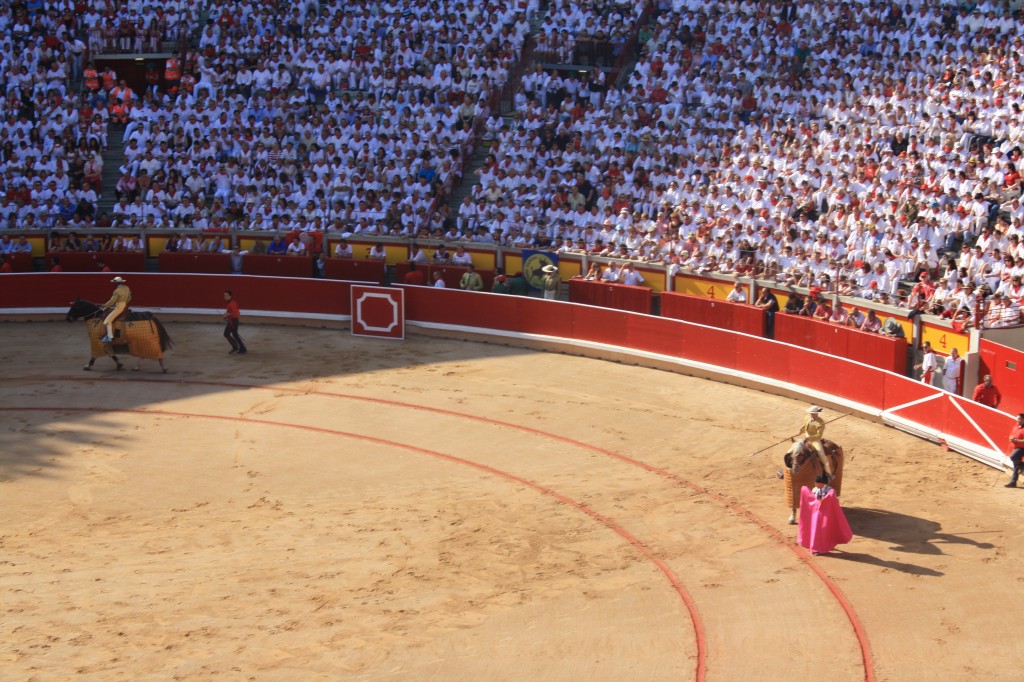 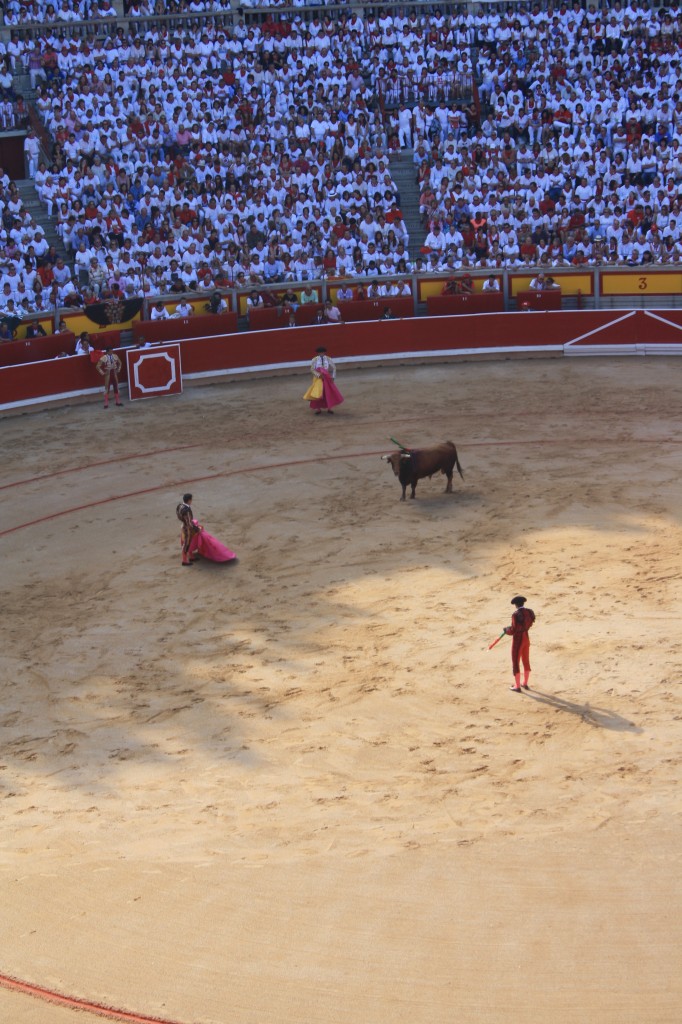 Seeing my confusion as the fight unfolded below, a Spanish man began enthusiastically explaining the ‘Art of Bullfighting’ to me. He was really into it. The final stage of the fight is called the ‘Tercio de Muerte’, the killing stage. The Matador begins a one on one with the weakened bull, judging its strength and skill. 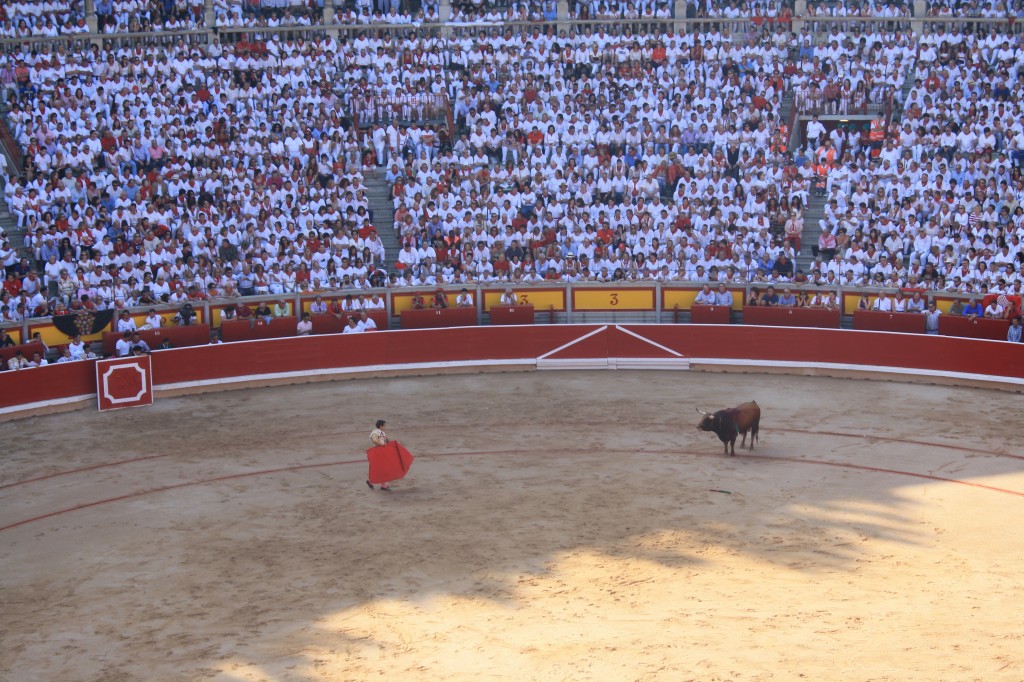 Despite the bull being by now weakened, this is still the most dangerous stage of the fight, as the Matador places himself in extreme danger. He makes a series of careful, yet graceful moves, getting exceptionally close the bull to vaunt his skill and courage to crowd. 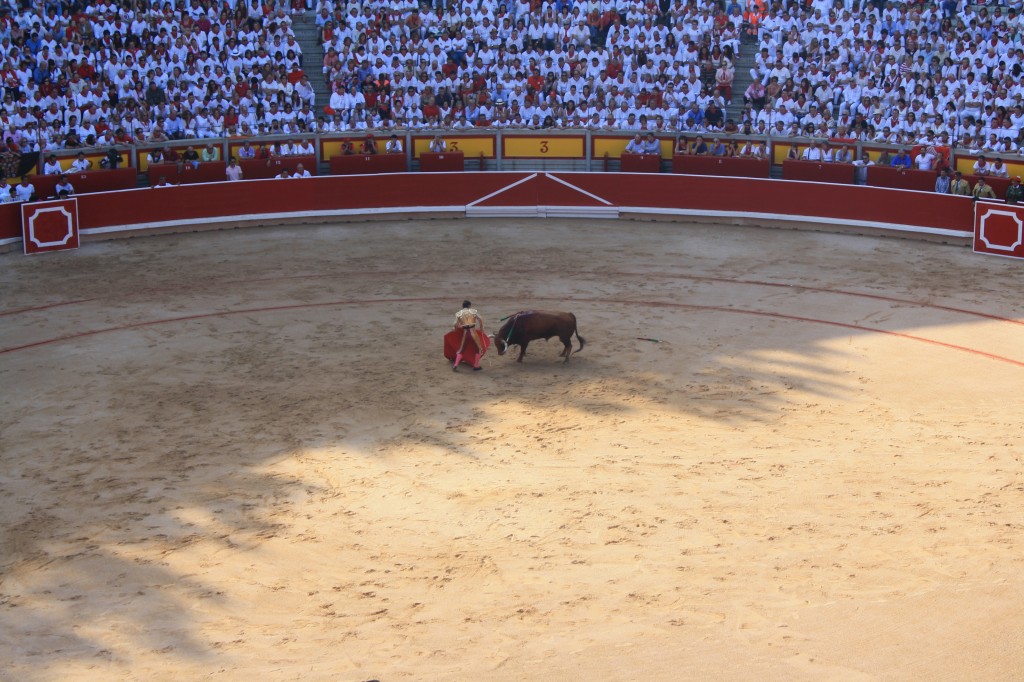 This is the climax of the fight, as the Matador readies the bull for a quick, clean death by his hand. 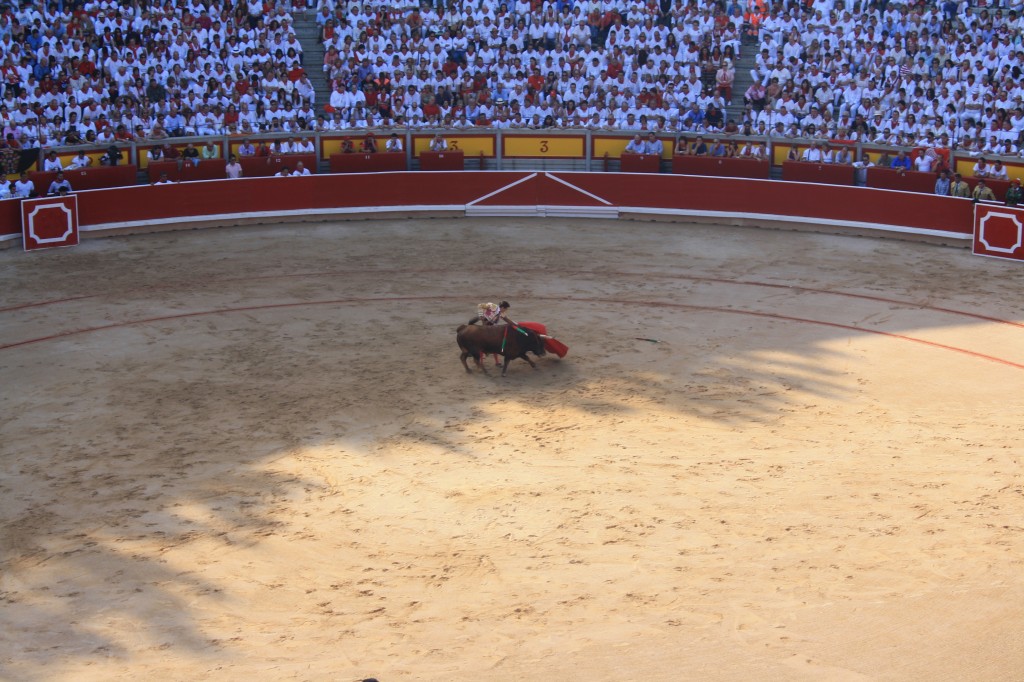 The finest matadors, I was informed, would be so in control of the fight as to have the bull run onto their sword in a spectacular finishing move of death. 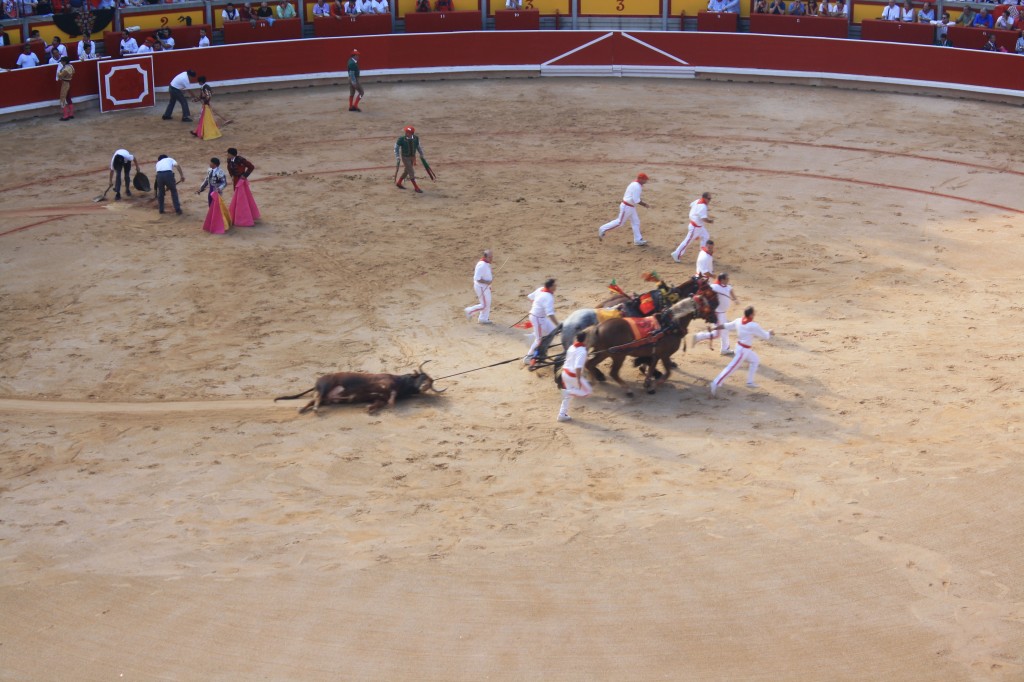 So of course, after this spectacle of death the only thing left to do was drink heavily again and psyche ourselves up for El Encierro the next morning. The death crazed sprint along narrow cobble stoned pathways we’d witnessed the day before. 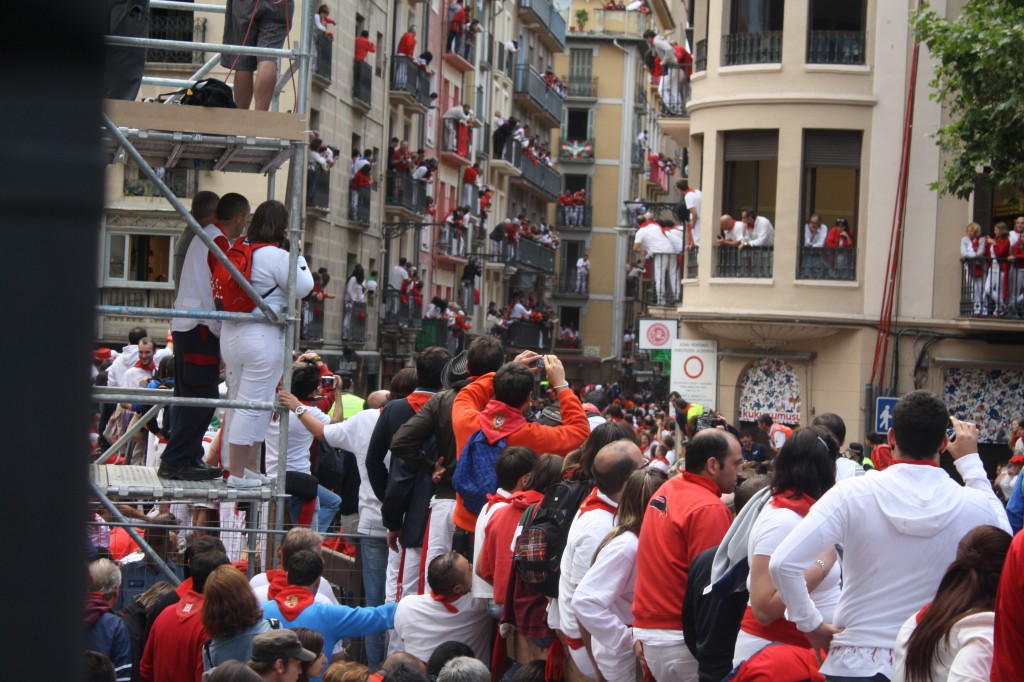 The bulls are run into the bull ring, accompanied by a herd of charging steers to guide them. If a bull is separated from the herd, then a brutal rampage of terror ensues as the frightened bull attacks anything in sight.

So at 6am my buddy and I lined up at the start, waiting for the rockets that would signal the release of the bulls from the pen and our potentially imminent and grizzly death on the end of a razor sharp horn. Knowing full well that two English tourists had been gored in the legs the day before and having seen the unsettling festival website which featured a kill and injury count for each day, I was, to say the least, slightly apprehensive as I waited among the throng of runners, all garbed up in the traditional white and red of La San Fermin.

Before the bulls were released a priest led a prayer, in Basque and then Spanish. An ominous prayer to the heavens for safety. 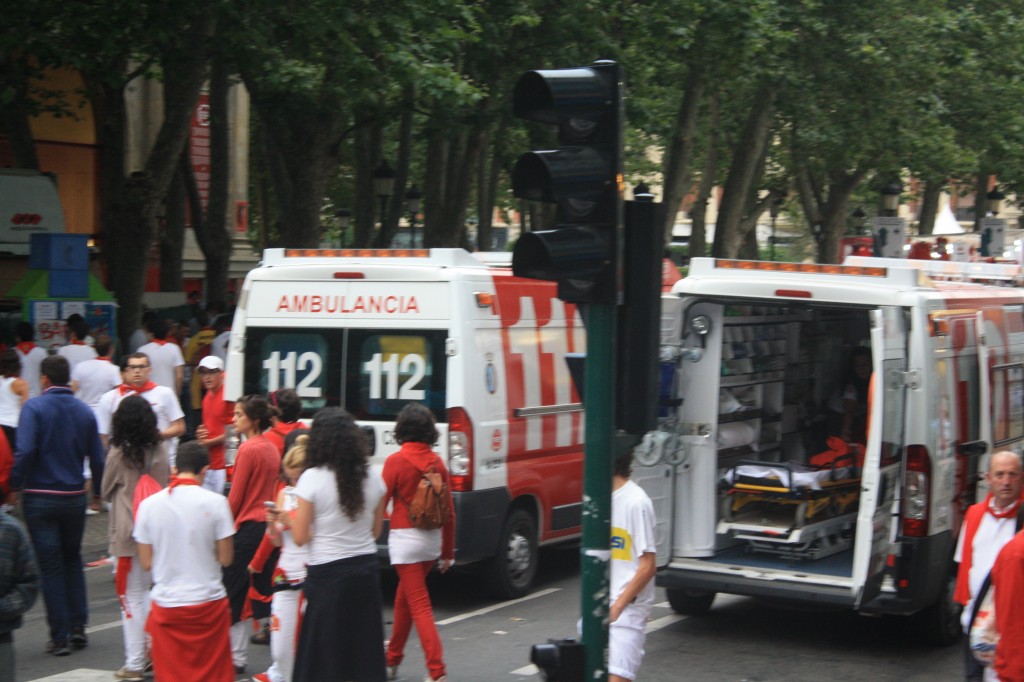 The run was a mass of panic. The animals charged through the crowd, knocking over those who got too close, as I sprinted up the cobbled streets fearing a horn to the back. As I neared the bull ring, most of the bulls had already passed, but the slower steer were still making their way along the road, casually plowing through the crowd. In the bull ring, I thought I was safe, but the real carnage had yet to occur.

The gates were closed behind the last surviving runners as replays of the big hits of the day were shown on a TV screen to a jeering, drunk arena. Then one of the bulls was released into the crowd.

Being particularly naive I assumed it had just escaped, as it carved a path of panic through screaming people, the scared running and the brave trying to touch it.

No one had told me about this part. Each of the six bulls were released into the crowd. It was complete insanity.

After getting wasted on sangria, scared shitless by fire bulls, chased down streets by terrifying beasts and then  attacked by them in an arena of thousands, it was about time to leave the fiesta. It still had a few days to go, but I guess I just wasn’t cut out for a whole week of brutal drinking and merciless killing.

The last night we spent in our hearty abode, safe from the hordes of drunkards roaming and vomiting in the street. As we waited for our night bus, my friend sourced himself some cardboard to keep warm with. I guess it was quality cardboard because unfortunately for him another man was after the same piece. Using crude hand signals he let my friend know that it was his cardboard. My friend was stubborn though, insisting otherwise, while the man looked at him with cold dead eyes and slowly drew a finger across his neck.

He went and sat across from us, his eyes never leaving that piece of dirty, greasy cardboard. Luckily our bus arrived so we clambered aboard, fearing the lengths this man would go to to secure that extra level of warmth and comfort for the night.

Pamplona. You are a place of beautiful yet terrifying death and I salute you. The only fitting manner in which to round off this incredibly high brow work of journalism, is with some more pictures of wasted people to indulge your laughter with: 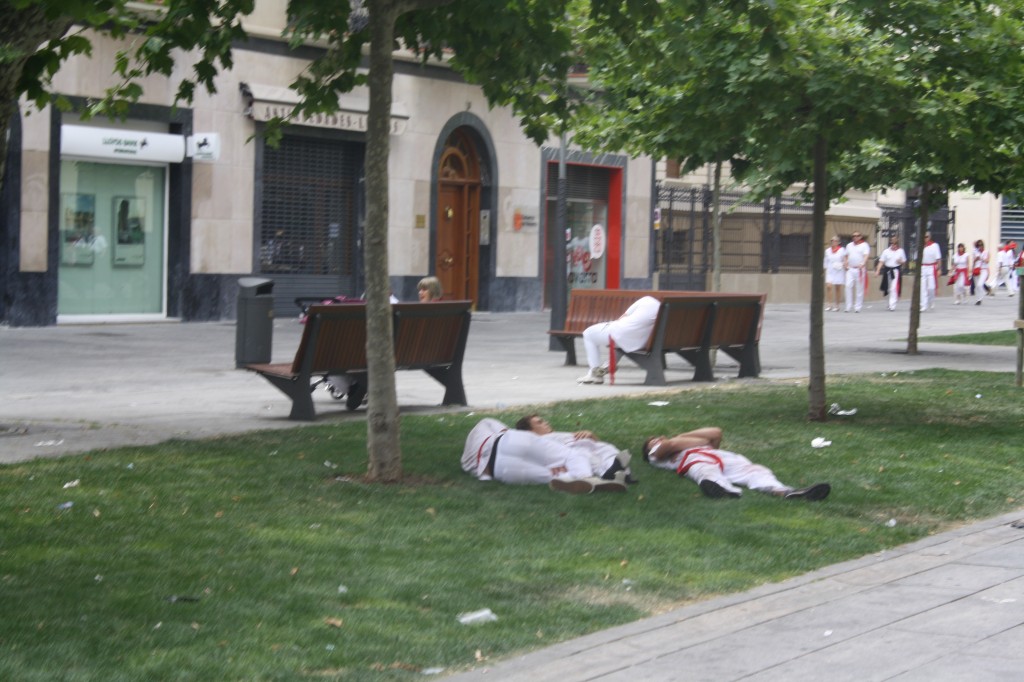 This is article first appeared on the Impact Magazine Website, the Official Student Magazine of the University of Nottingham.