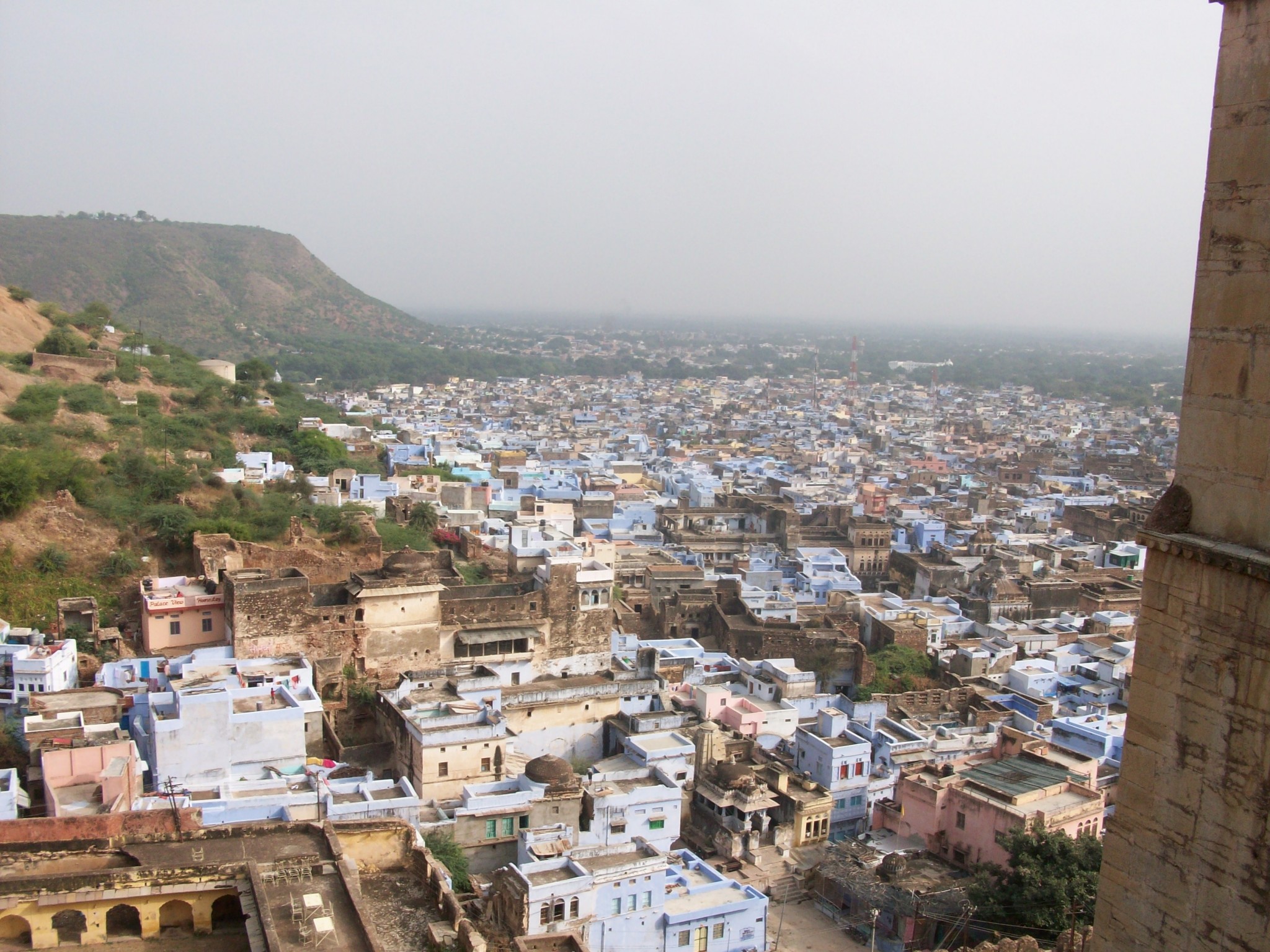 The town of Bundi is a blue oasis in the dust of the Rajasthani desert.

Kipling wrote tales of Empire from a lakeside princely palace in this quiet Indian town, but I embarked on a savage motorcycle ride through the countryside, encountering waterfalls and misfortune along the way. 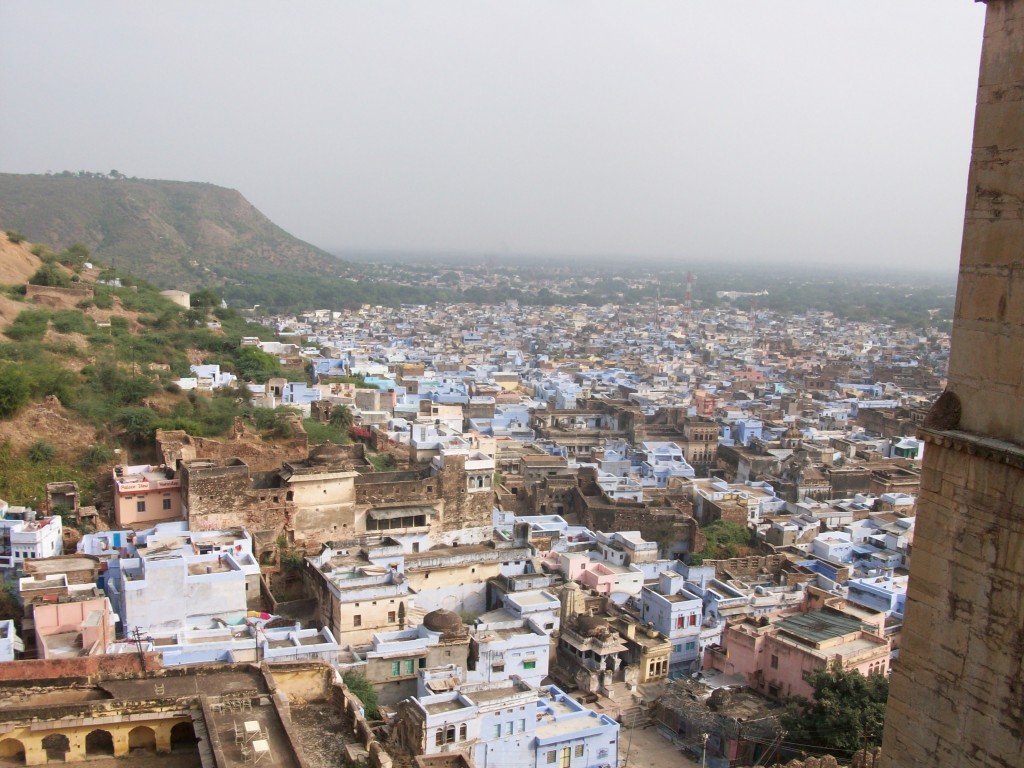 For an Indian town, this is a most certainly a quiet one. The sprawling, urban masses of Delhi or Jaipur are far from the bright blue houses of Bundi, but that doesn’t mean to say that I didn’t have to throw myself out of the path of an oncoming Tuk Tuk driver every now and then.

The peacefulness of this place is down to the fact that it’s been largely overlooked by the standardised tours that take in the ‘Golden Triangle’ of Rajasthan, rushing from the Taj Mahal to the Red Fort and being overwhelmed by the chaos of India’s sprawling cities. 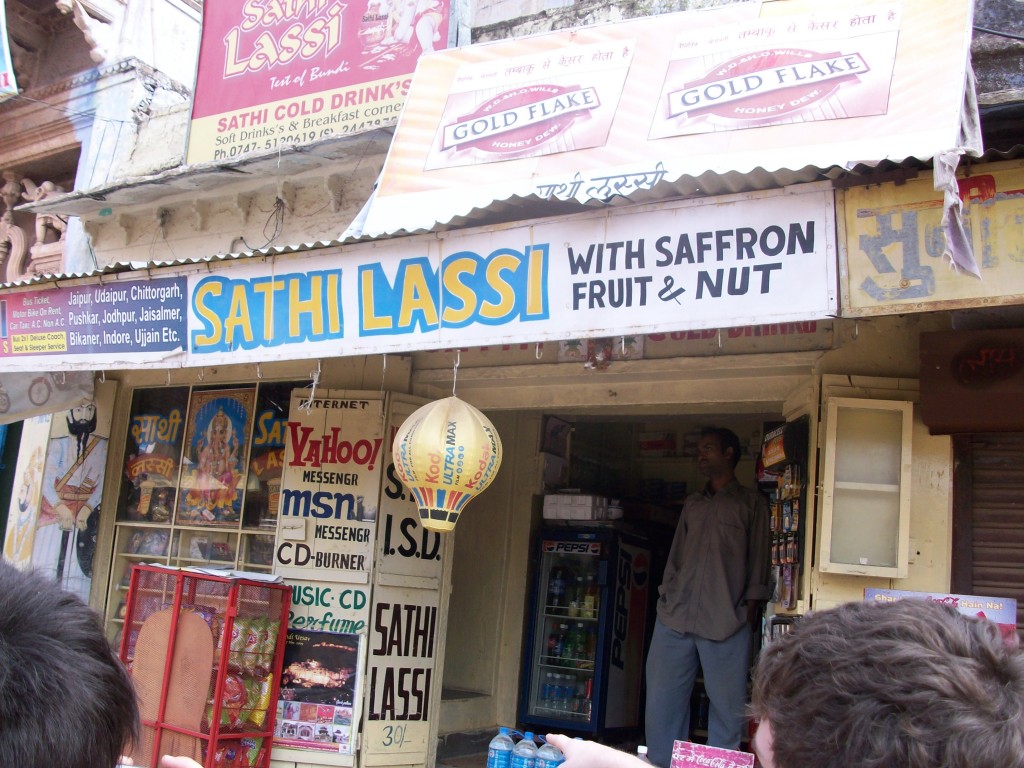 Those travelers who dare to tread the duty roads that lead here will find only a few Lassi shops and ramshackle medieval fort that’s been overrun by monkeys. 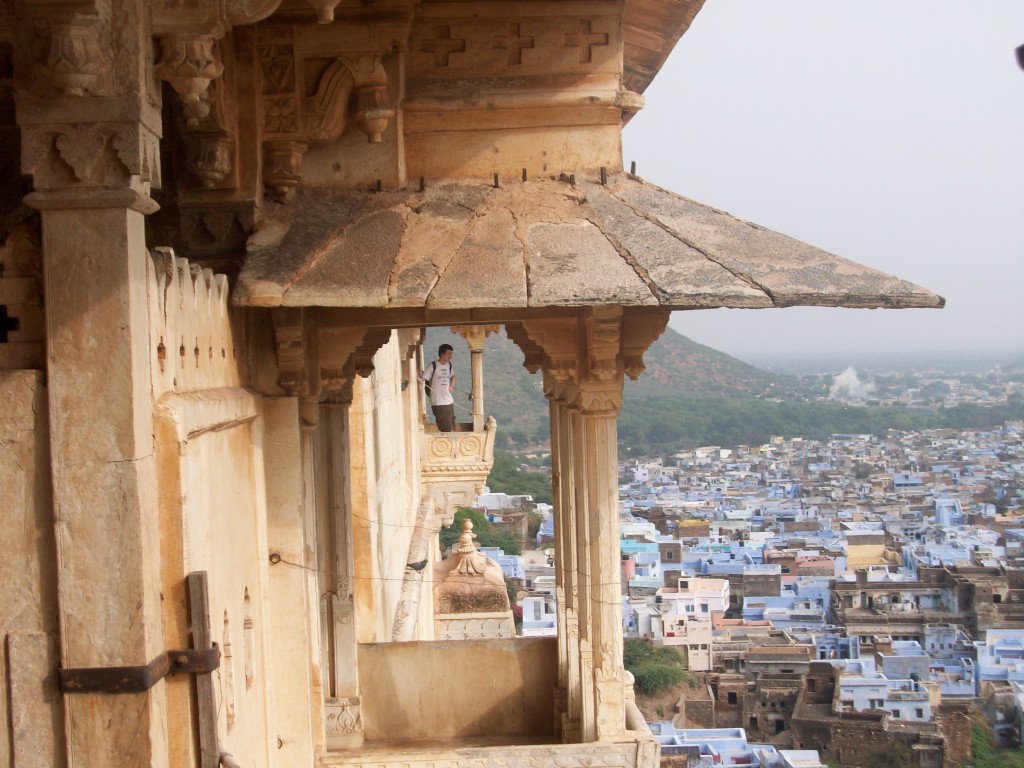 The Tagarah Fort looms over the town, and provided you don’t get on the wrong side of any monkeys you can enjoy the peaceful environs of Bundi from up high. Across town Rudyard Kipling used the old lakeside palace to write Kim, his novel about the Great Game being played between India and Russia on the frontiers of Afghanistan, to the north of here. 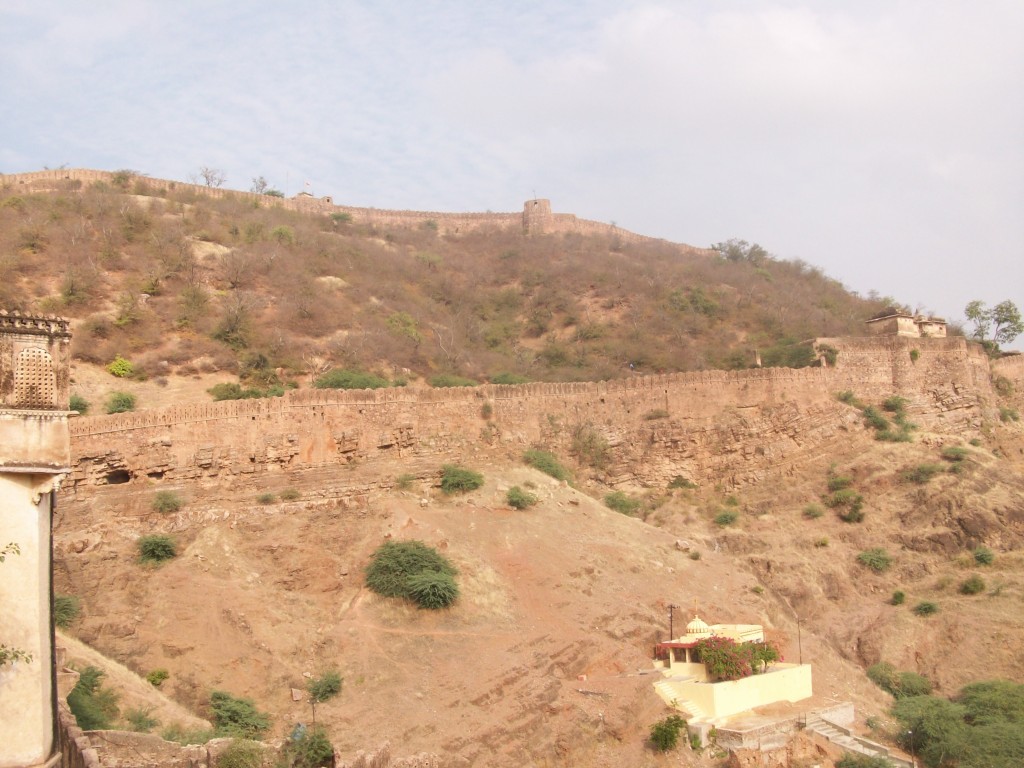 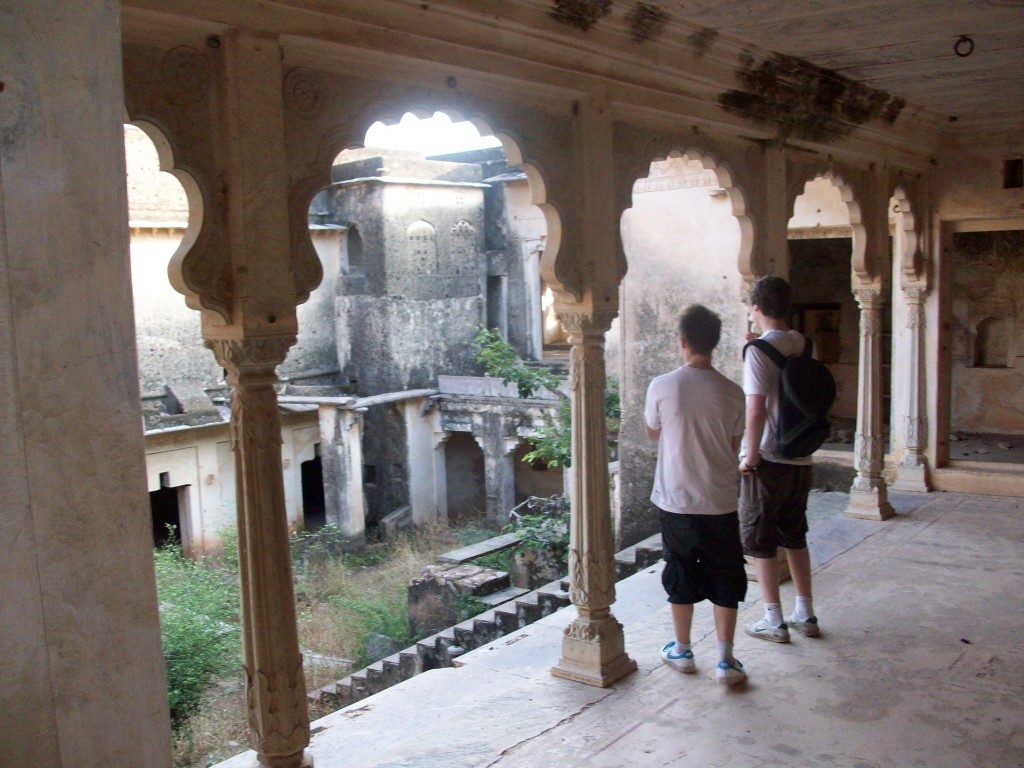 Relaxing at a rooftop restaurant in the town, plans were laid that would soon shatter the blissful atmosphere that I’d found here. I would soon be leaving the peaceful hillside fort, and heading off on the pot holed, mad roads that you won’t find anywhere in the world other than India, on the vague premise that there might be a small waterfall a few miles away.

I had never ridden a motorcycle before, but as with anything the deep end is the best place to start I suppose. Myself and the traveling companions I was with decided unanimously that it couldn’t go that badly. I mean the worst that could happen was death, but really, who thinks about that? 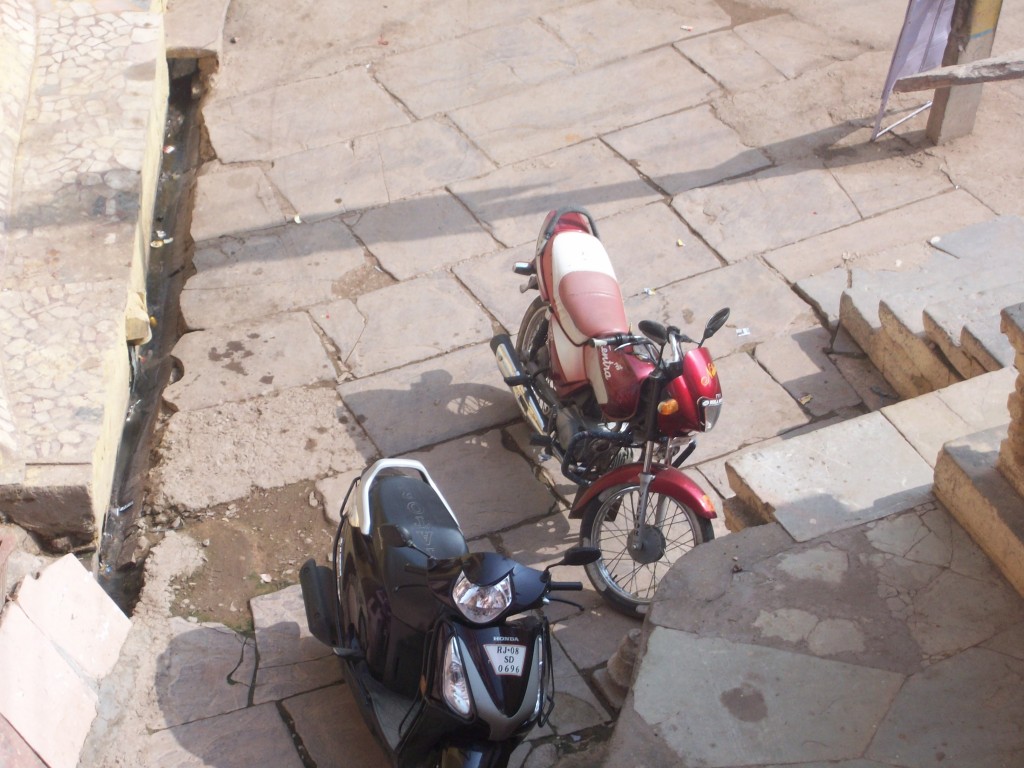 Mr Sathi, the man who made delicious Lassi’s in Bundi, turned out to have a few spare motorbikes lying around, which he happily rented out. The only test of ability he asked for was to be able to start the thing. My friend who claimed to have a rudimentary understanding of bikes kicked things off by revving the motorcycle off the road and into a wall. Mr Sathi, seemingly uncaring and probably completely inebriated by the huge quantities of hashish he seemed to smoke in the shop, waved my friend off the bike and told me to have a go instead. I was more successful- although the criterion for success was demonstrably low at this point. I managed to get the bike-which was still running after the first crash- around the corner without toppling or seriously injuring anyone. Stopping out of the hazy sight of Mr Sathi I managed to burn myself on the exhaust when I climbed off. But having passed Mr Sathi’s driving test I was clearly overqualified to hit the streets. 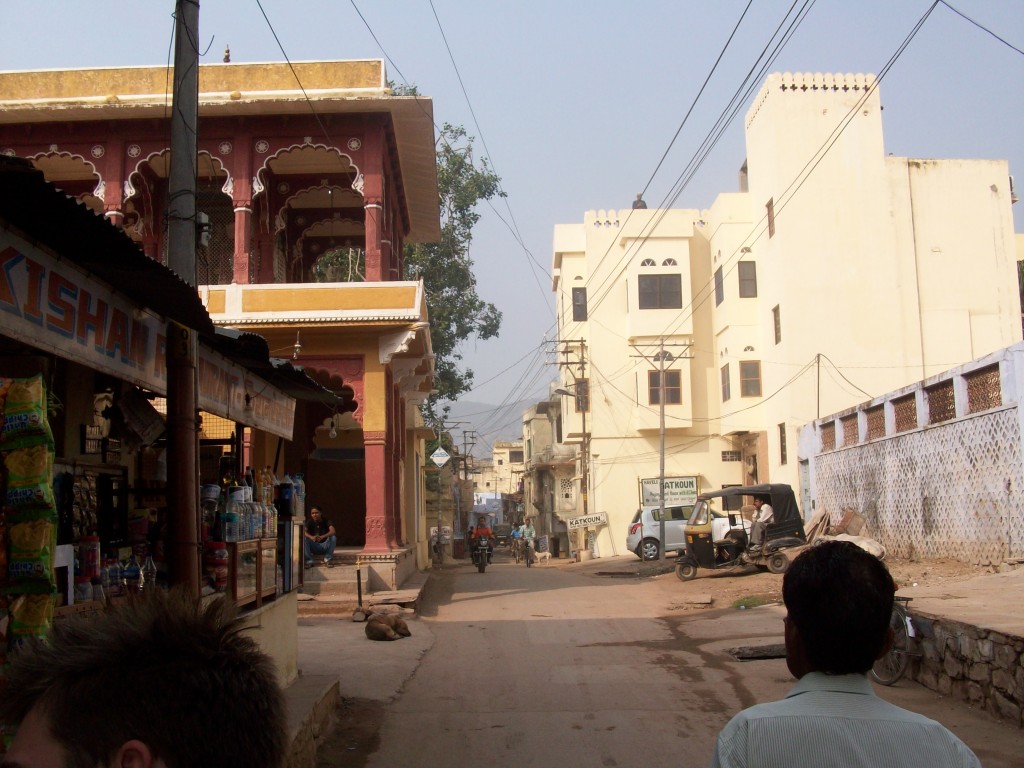 Things were to turn decidedly savage on the roads. The slow, halting ride out of Bundi offered spectacular opportunities for scenic moments, but with trucks hurtling along the uneven roads it was perilous to be distracted. 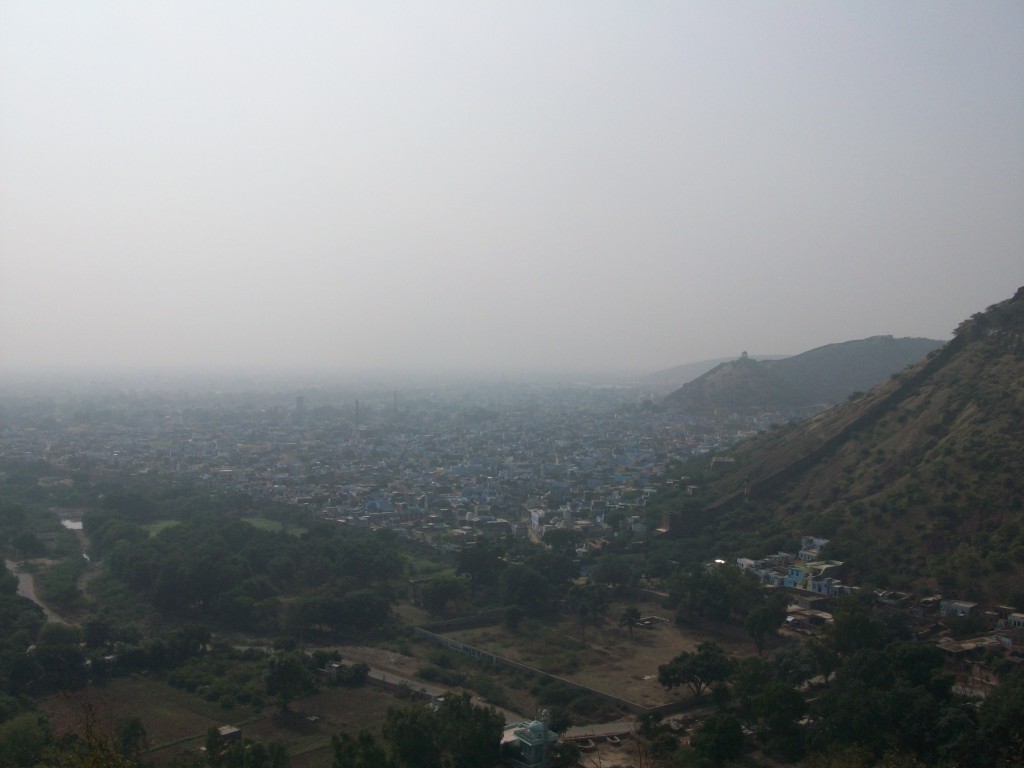 Over the hills, the roads began to open up and the drivers became increasingly reckless. I was riding along the hard shoulder, which was basically a dirt track by the side of the road, avoiding buses and rickshaws. As soon as I’d started to gun the bike a bit though I realised that I didn’t have a clue where we were, or where this supposed waterfall was. Perhaps it was just a figment of Mr Sathi’s drug induced hallucinations.

A local directed us down some rough looking roads and the small bike convoy began churning up a storm of dust. Soon the road beneath the tires simply disappeared. There was just gravel and rock and I was weaving around trying to stay on the flatter patches of ground. 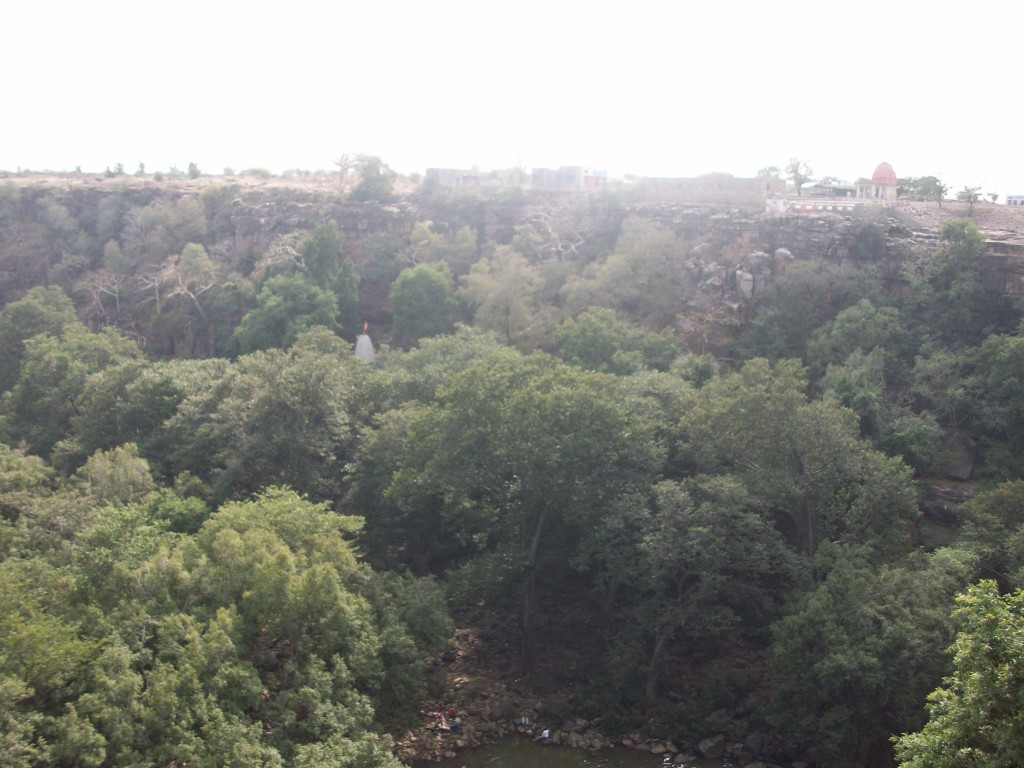 With seemingly endless desert ahead, the ground sharply fell away, revealing a green and hidden valley. We had stumbled upon the waterfall we were in search of. 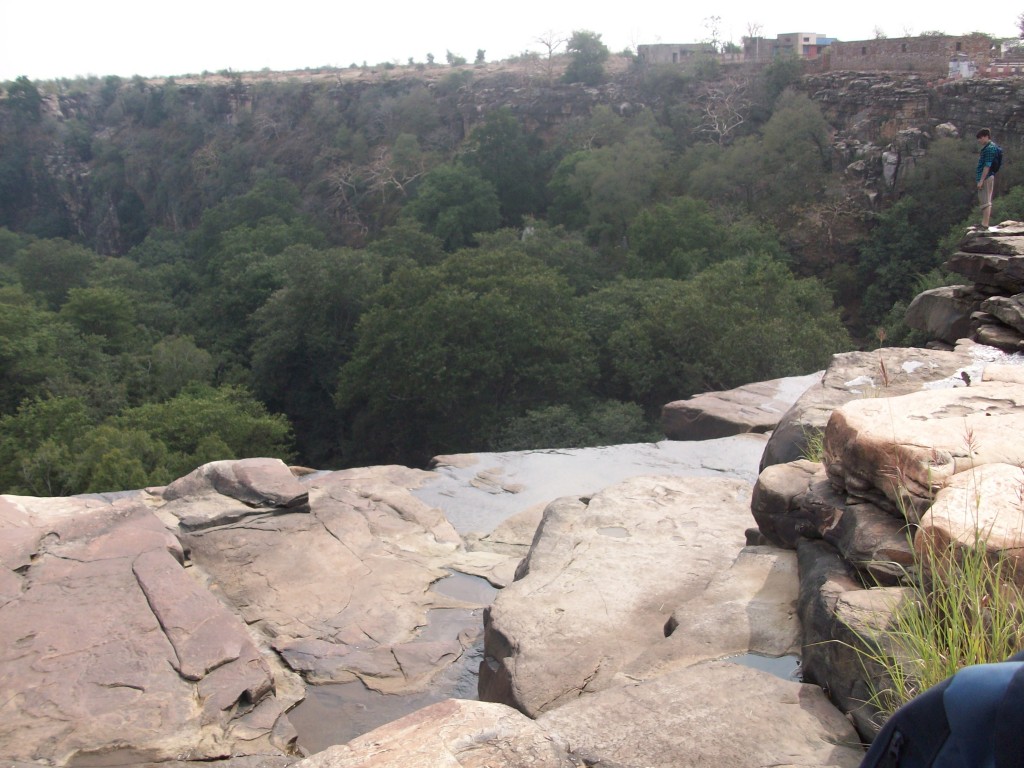 Parking the bike up, I headed to the edge to look over. 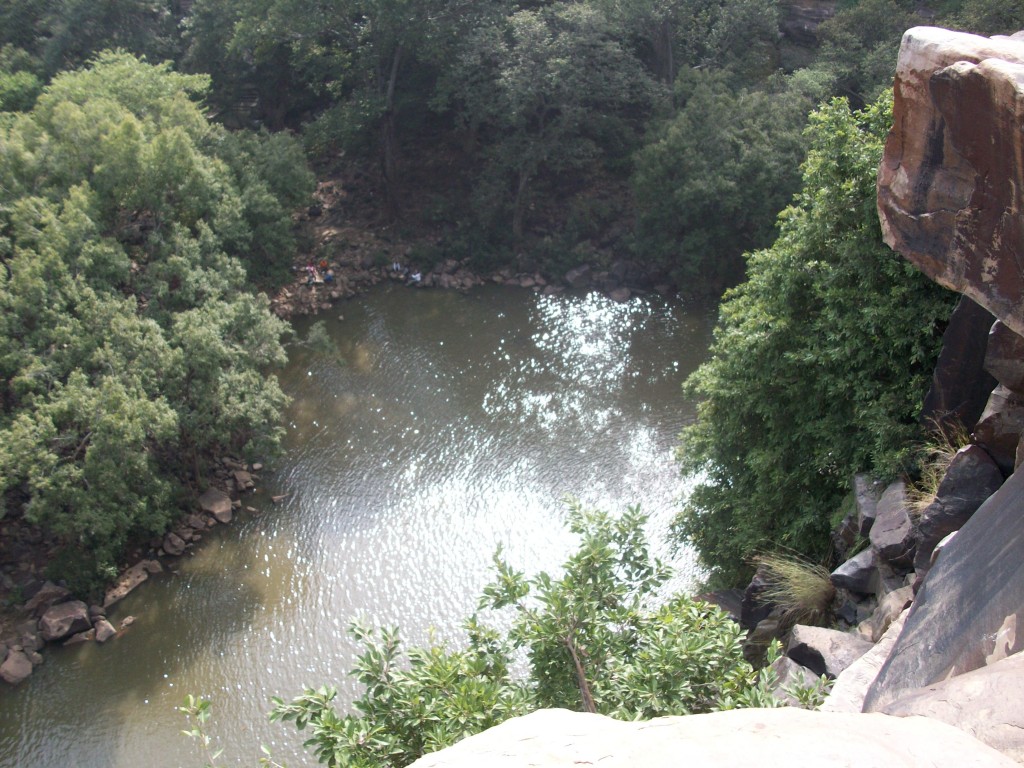 Covered in dust, and shaken to the core by the vicious roads of India, the water was a welcoming glimmer below. 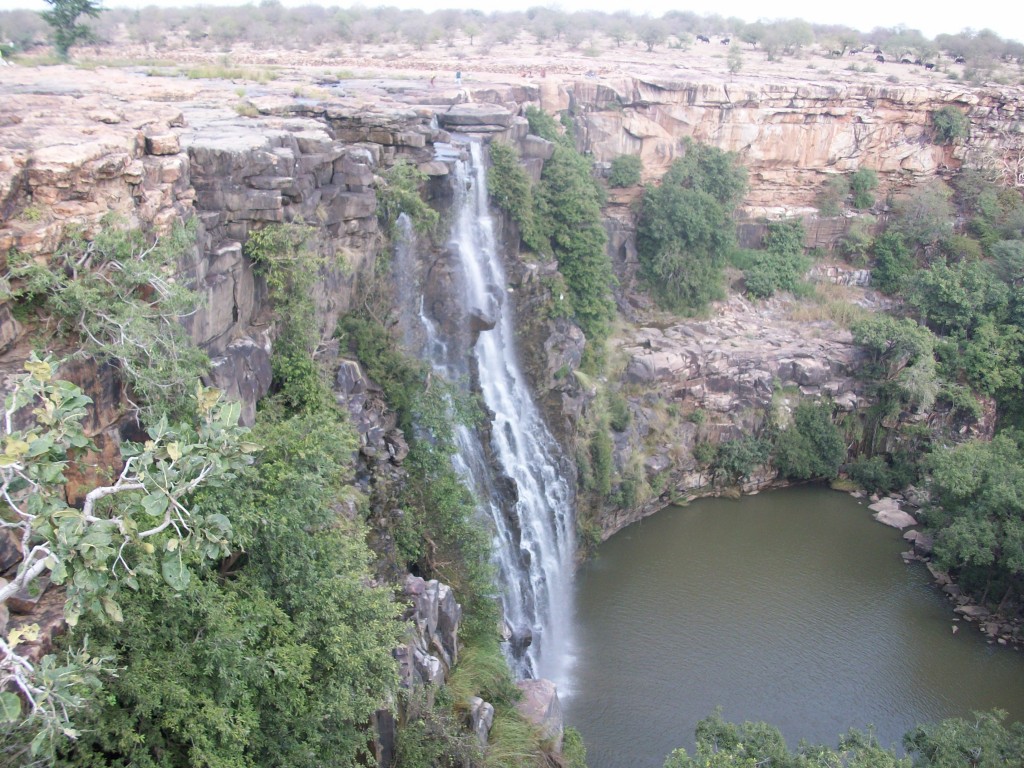 Down in the valley I embraced the respite from the heat, and having just survived the roads of death, the cleanliness of Indian water was hardly at the forefront of my mind, and I dove straight in. 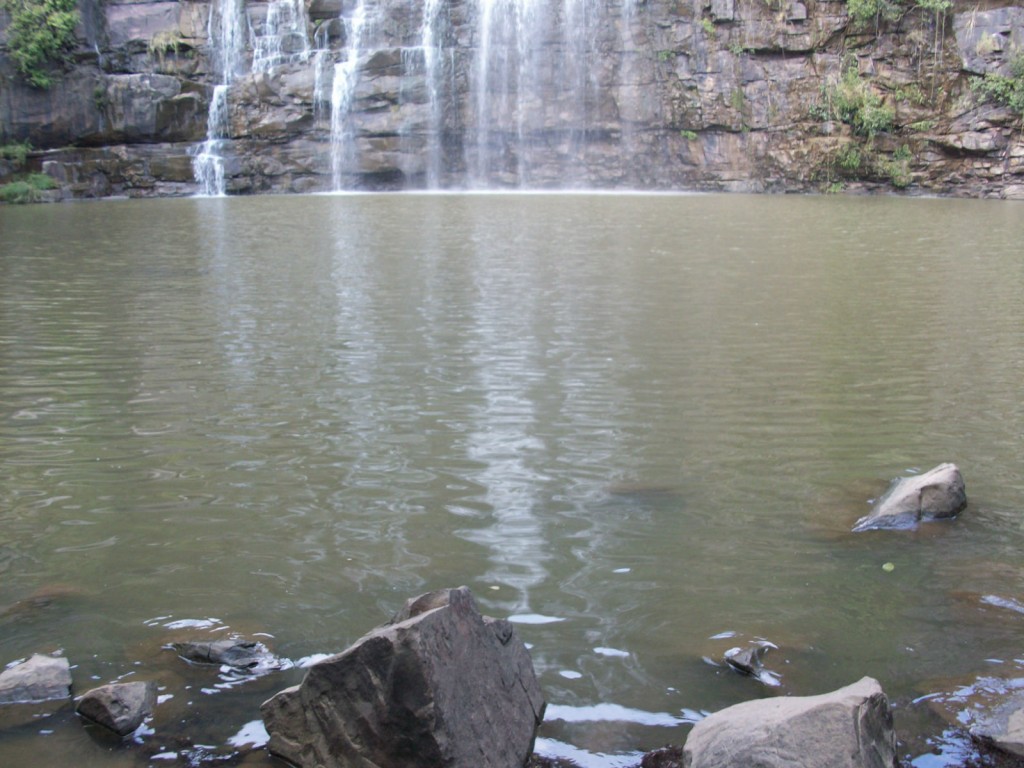 This was just the dry season. In the rains this waterfall would fill the pool below to bursting. A real oasis in the desert. 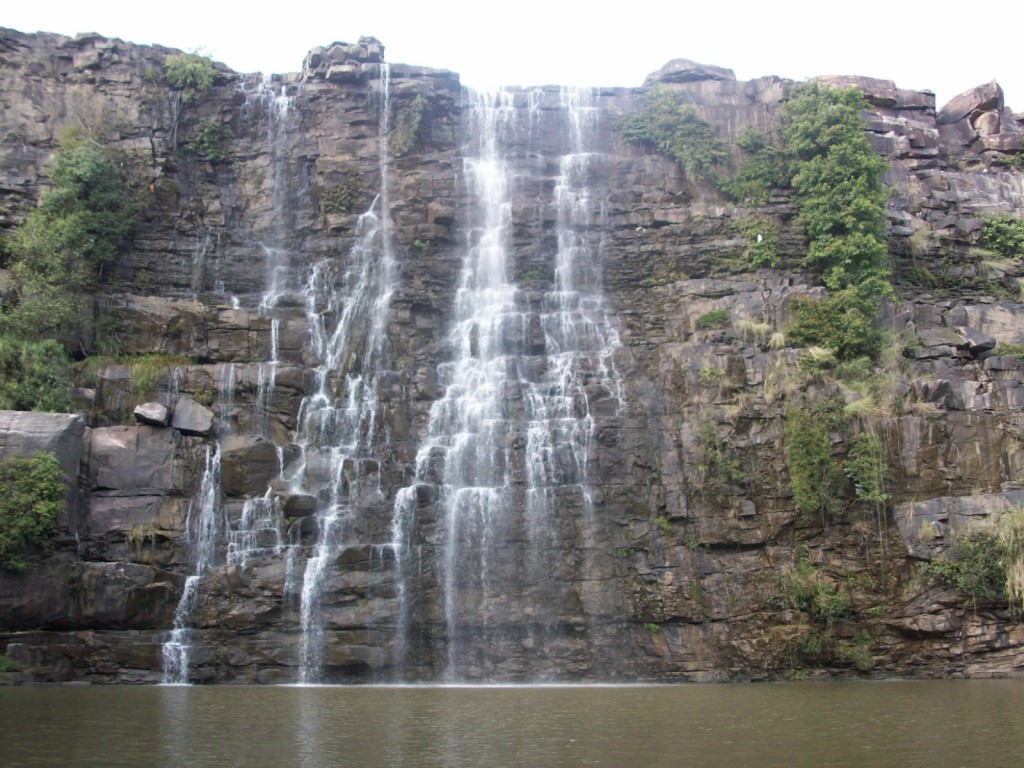 There was always the journey back to make though. Revitalised, and filled with the confidence of having not died on the road yet, I thought, how hard could it be to get back to Bundi? I made the decision to take a back seat, and let my friend ride the bike back. This was the same man who’d crashed the very same bike into the wall. But give a man some practice and things couldn’t go too bad, could they?

And things started well. I was hanging on the back, although slowly realising that things were much more terrifying when you weren’t in control. It seemed like things were in order though, only the odd wobble here and there, and the roads were fairly treacherous after all out here in the desert.

But as we emerged onto better roads, we also picked up speed. Things turned bad. Seeing a tractor taking up the width of the road, most people would consider slowing down and carefully overtaking. Inexperience, overconfidence and the Rajasthani heat had clearly all overcome my driver. Rather than slowing down, I hung on precariously while he attempted to drive off road and undertake. It didn’t go well. We hurtled past the tractor, but began to spin out in the sand. A misplaced rock later and we were both flying into the bushes. 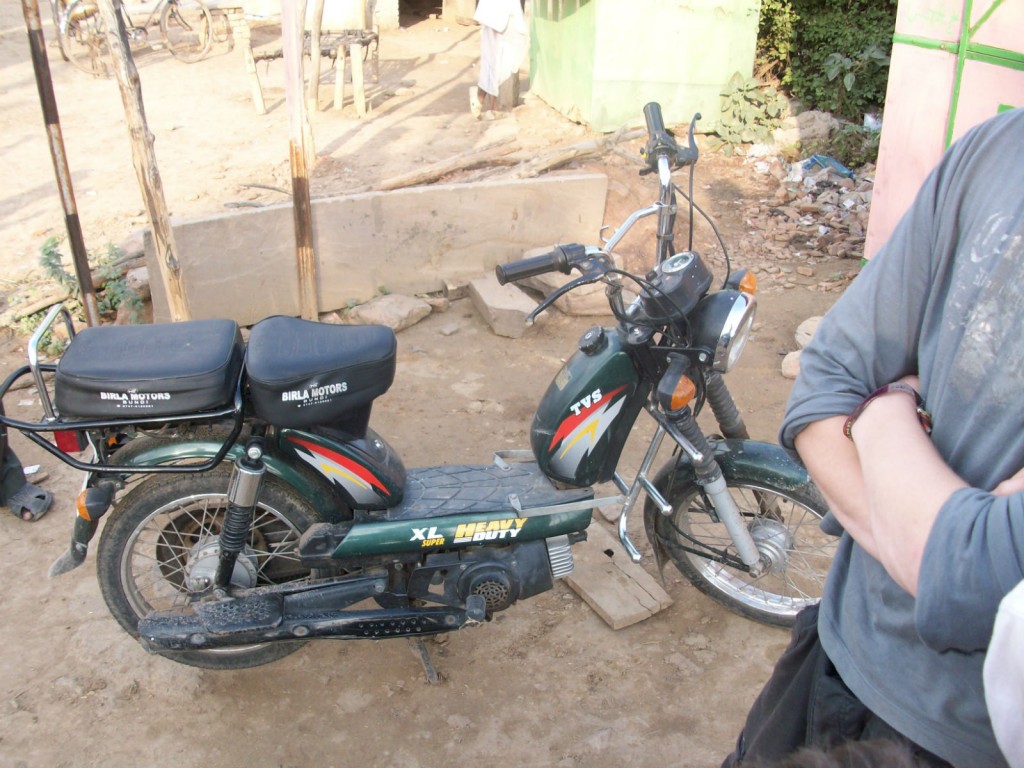 The tractor just kept slowly rolling by, as I was sprawled out across the dirt. Undeservedly, we were both still alive. The bike was broken though. The accelerator wires were hanging loose and the kick start was bent out of shape. 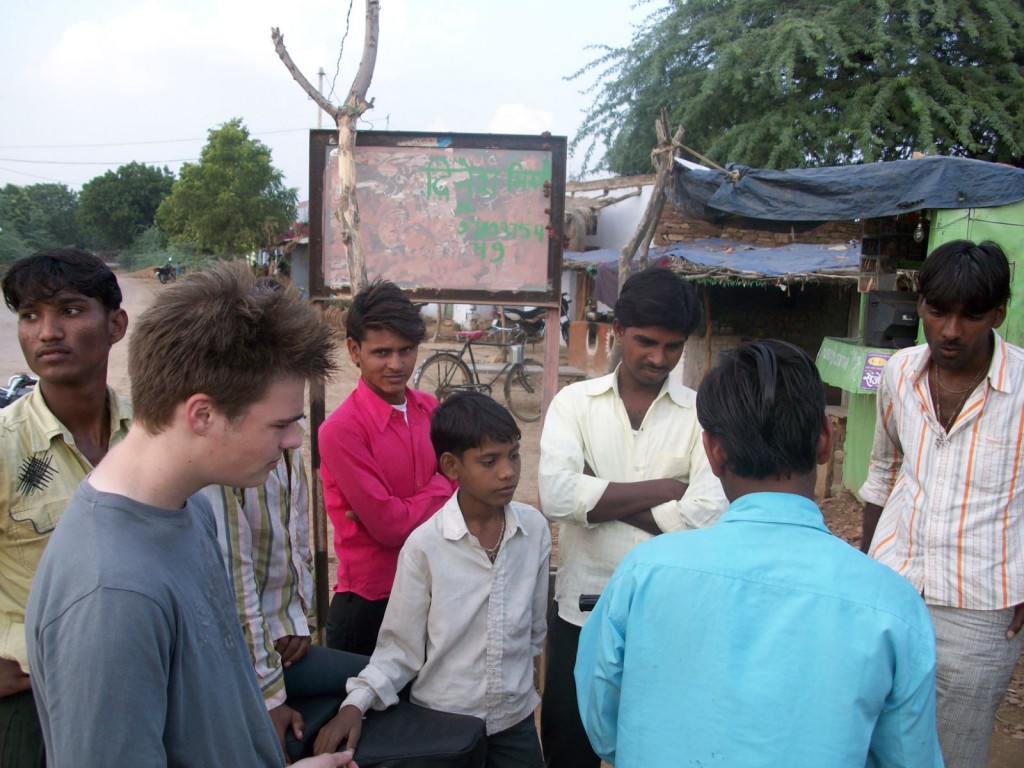 A crowd began to gather. Some to laugh, but some to help. Lacking tools, one man fetched a roadside rock, possibly the same one that had caused this carnage, and aggressively smashed the kick start into place so we could at least get the bike running again.

The throttle was a mess though. With dark approaching we had to get back to Bundi somehow, or face a night on the road. A true nightmare in the heart of Rajasthan.  Climbing back on the bike, the only way was to pull the accelerator wires. With these grasped tightly in one hand we slowly crawled along the road, forced onto the hard shoulder for the journey back. A savage return journey to the blue of Bundi. I made it though. And made it alive. 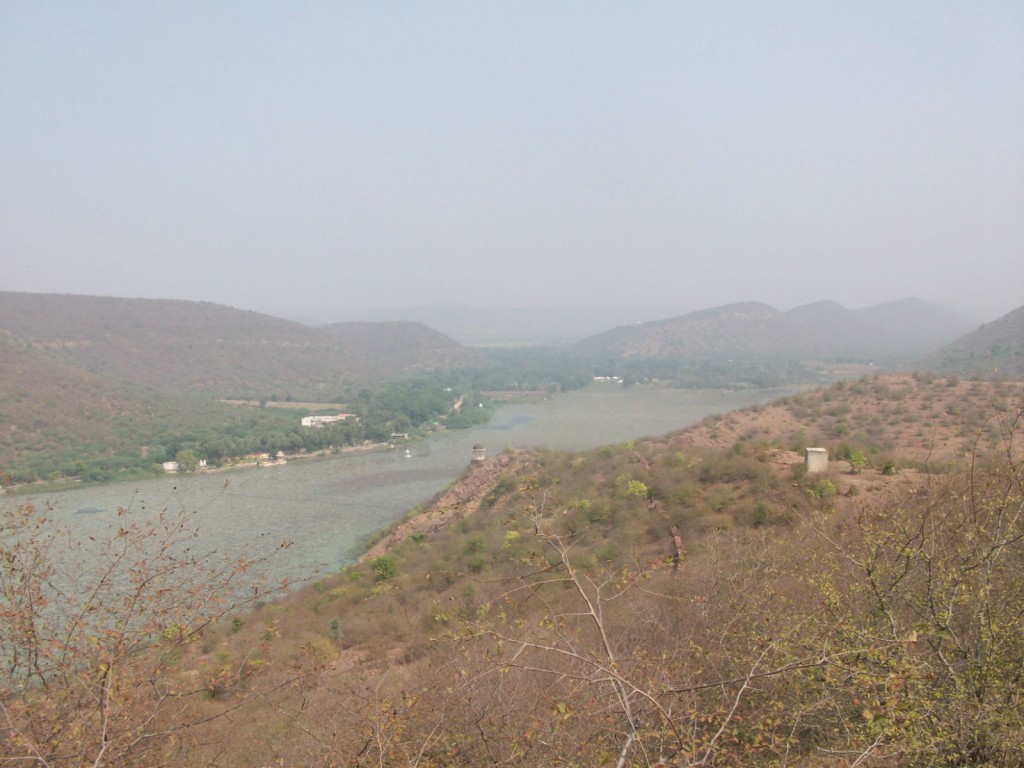 And even had enough time to stop and admire the view.

The Bhimlat waterfall can be pretty tricky to find. It’s a few hours ride from Bundi, on terrible roads, and not accounting for any crash time. Ask locals for directions. There are few signposts.

Reckless motorcycle rides are becoming a recurring theme on Travel Tramp. You can read about more disastrous biking exploits here.