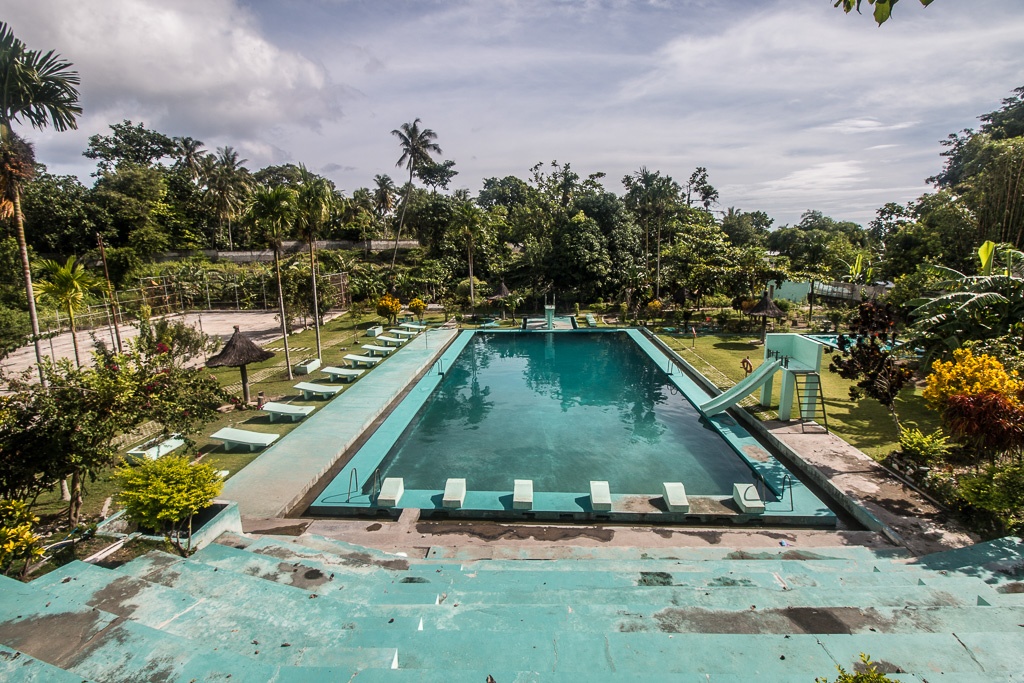 Baucau East Timor. The country’s small second city might only be 125 kilometres from the capital Dili, but the two cities may as well be islands apart.

Dili is sprawling, urban and as modern as things get in East Timor, while Baucau is compact, with rambling Portuguese colonial streets and a laid back small town feel.

More so than this, the 125 kilometres that separate the two cities can take hours to traverse, as the two largest cities in East Timor are only roughly connected by broken roads, gravel tracks and unpredictable transport.

I travelled from Dili to Baucau on rough roads and dangerous tracks to find out what East Timor’s second city has to offer travellers. When I finally arrived in Baucau, I found swimming pools and crocodiles. Although luckily not quite in the same place…

For Baucau Travel Advice, scroll to the end of this article. 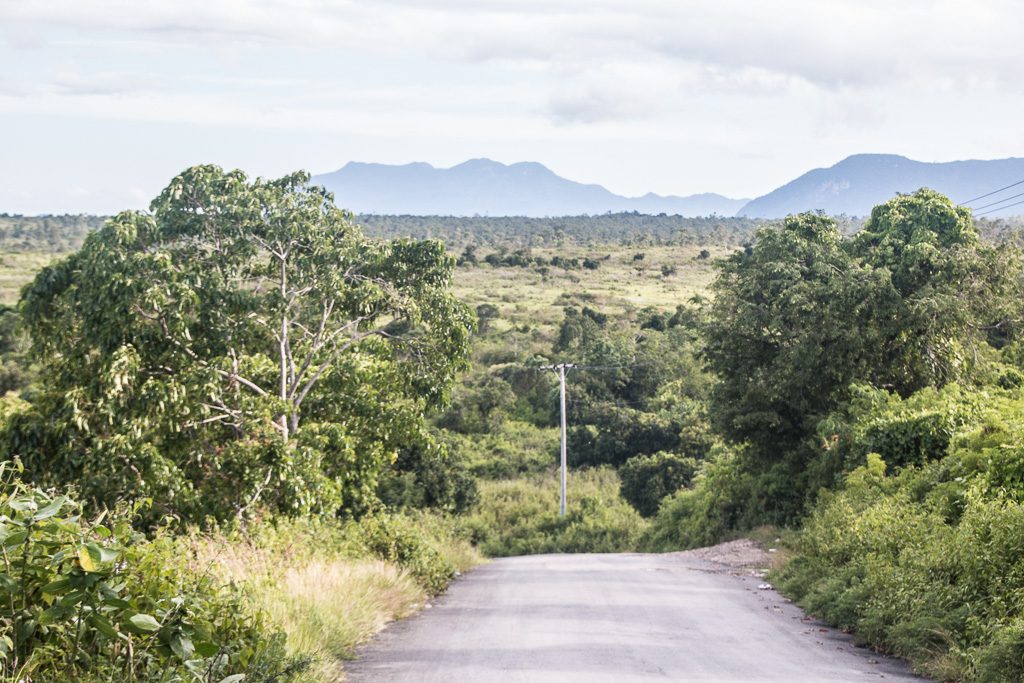 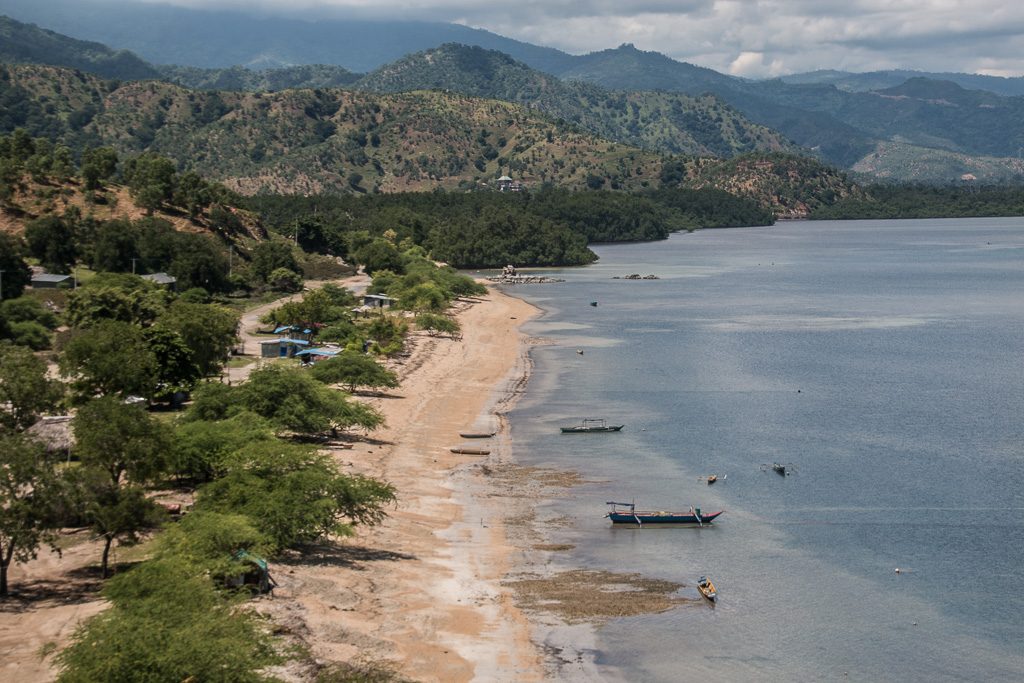 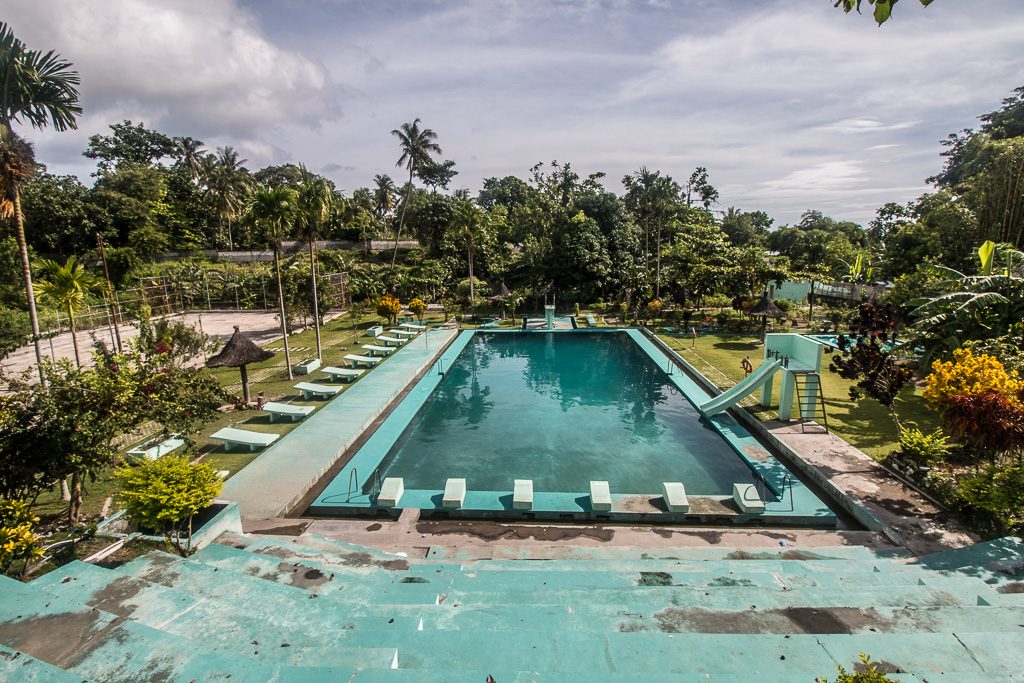 The Long Road To Baucau East Timor From Dili

The road from Dili to Baucau was long. Despite the fact that these are the country’s two largest cities – although Baucau still only has a small population of 15,000 inhabitants – the main highway that connects the two is in many places totally non existent.

East Timor’s lack of infrastructure is a wider problem that affects the entire country, but leaving Dili on a rented motorbike and hitting this ‘highway’ for the first time forced me into understanding the extent of the problem. East Timor only gained their independence from Indonesia in 2002, but not before the departing Indonesian armies and militias caused as much damage as they could. Since then, the new nation has struggled to repair and rebuild and here on the highway, 15 years since independence, the road was crumbling, broken and in places just simply eroded into the dust.

It was a long, long ride to Baucau from Dili. 125 kilometres took most of the day, but what East Timor lacks in roads, they make up for in spectacular coastal scenery, and although it was a rough ride, it was a beautiful, rugged ride alongside white sand beaches and dramatic cliffs.

Eight hours weary hours, two flat tyres late, and I arrived in Baucau covered in dust, mud and wondering how anyone in East Timor could make this journey regularly. After all, the scenery wouldn’t be quite as exciting on the second or third drive… 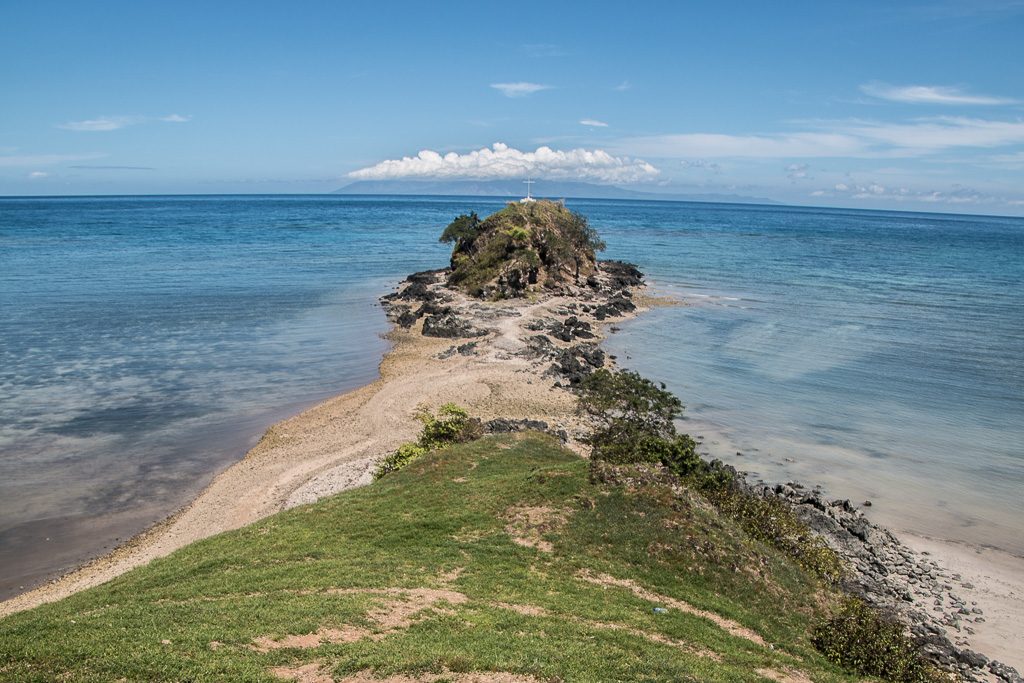 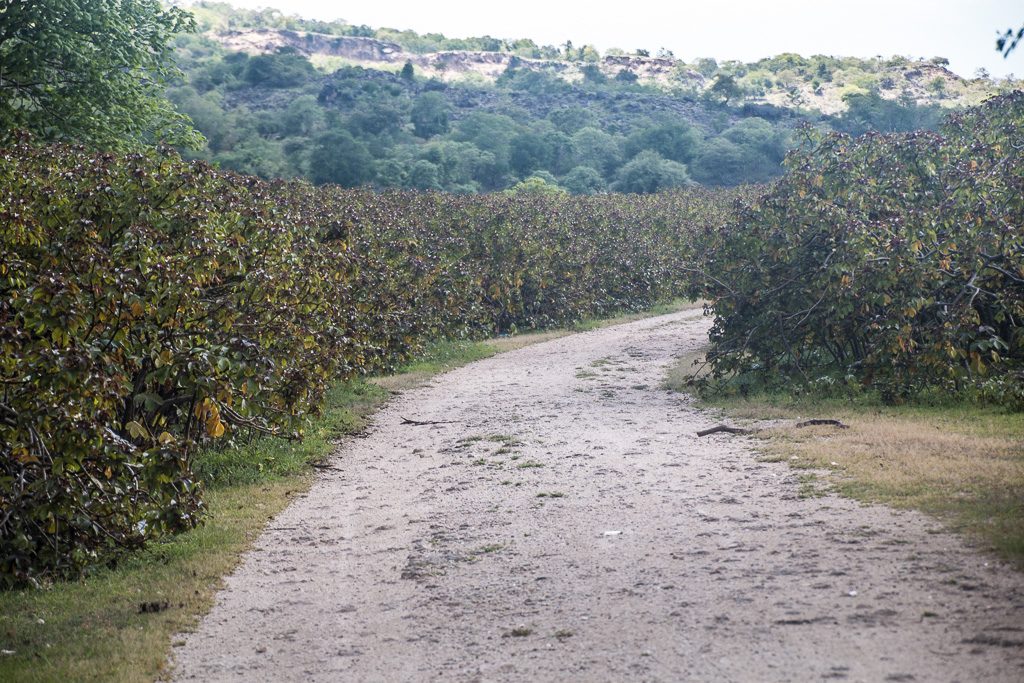 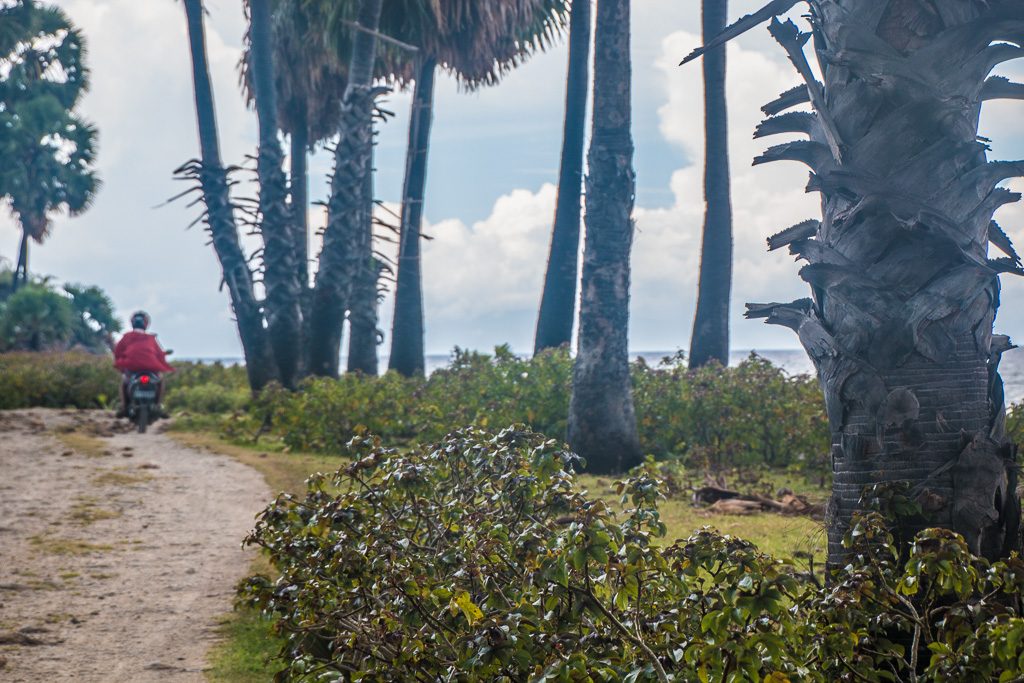 For 400 years, from the 16th century until 1975 East Timor was a Portuguese colony, but an under developed colony on the fringe of an Empire. Baucau was always more a getaway from Dili, a quieter place away from the colonial capital, known for its swimming pool and grand guesthouses.

The old town I arrived in was lined with ramshackle colonial buildings that despite their peeling paint and dented walls still retained their distinct Portuguese style amongst the palms and creeping forest. The grandest affair in Baucau is the Pousada de Baucau, a huge, pillared hotel that used to cater for the Portuguese elite, but now rents its fashionable rooms to the few luxury travellers adventuring here from Dili.

I gazed in awe at the charming building before heading into the cheaper, new build next door to collapse after the intense journey from Dili. 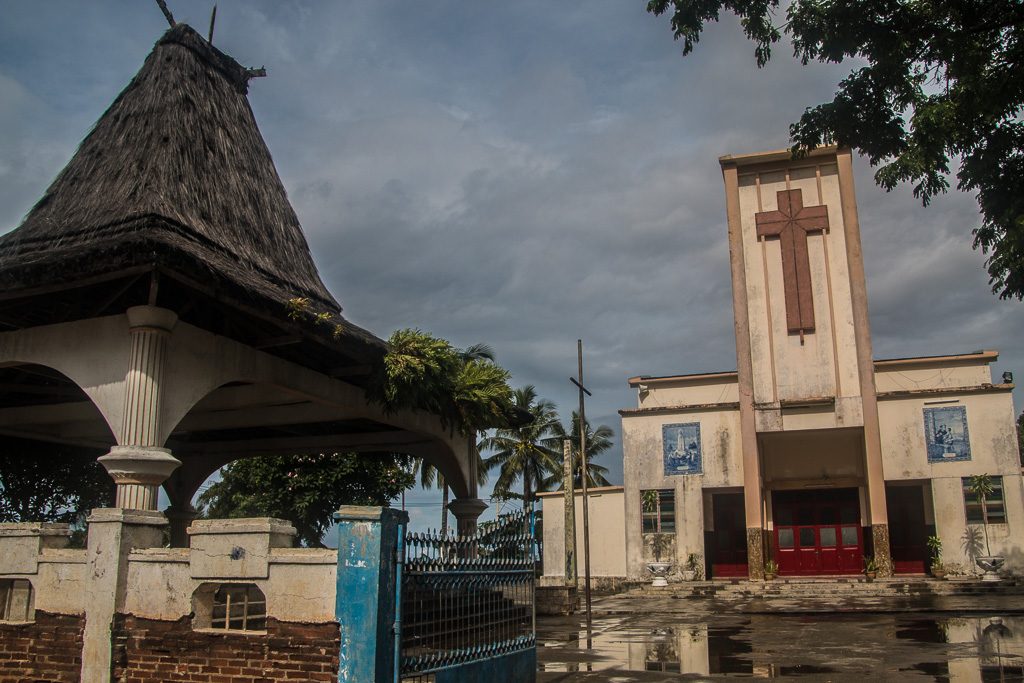 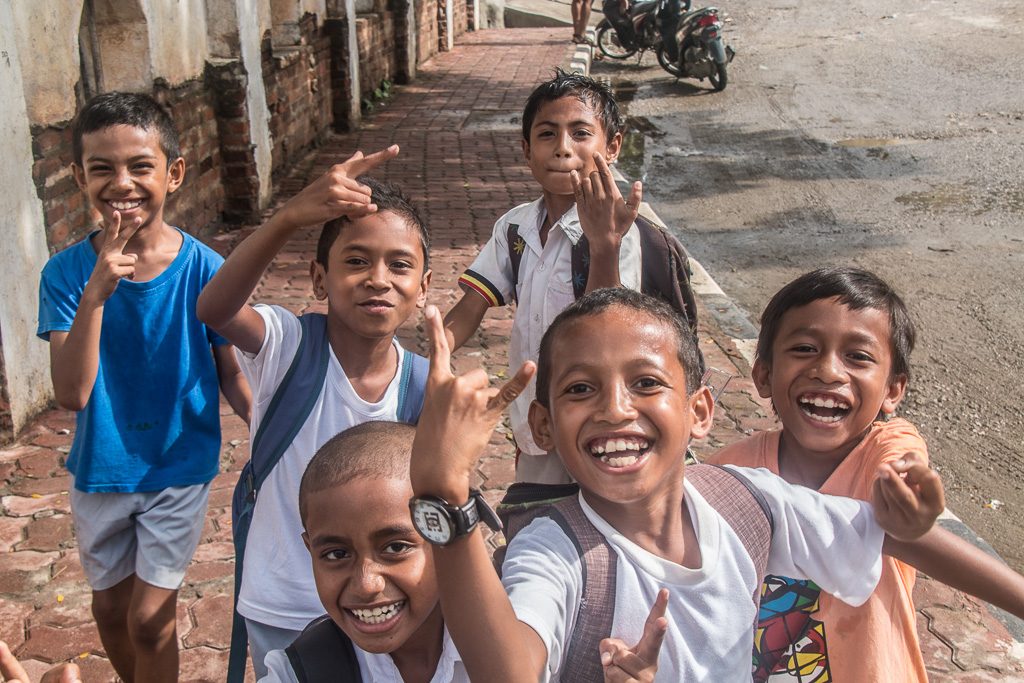 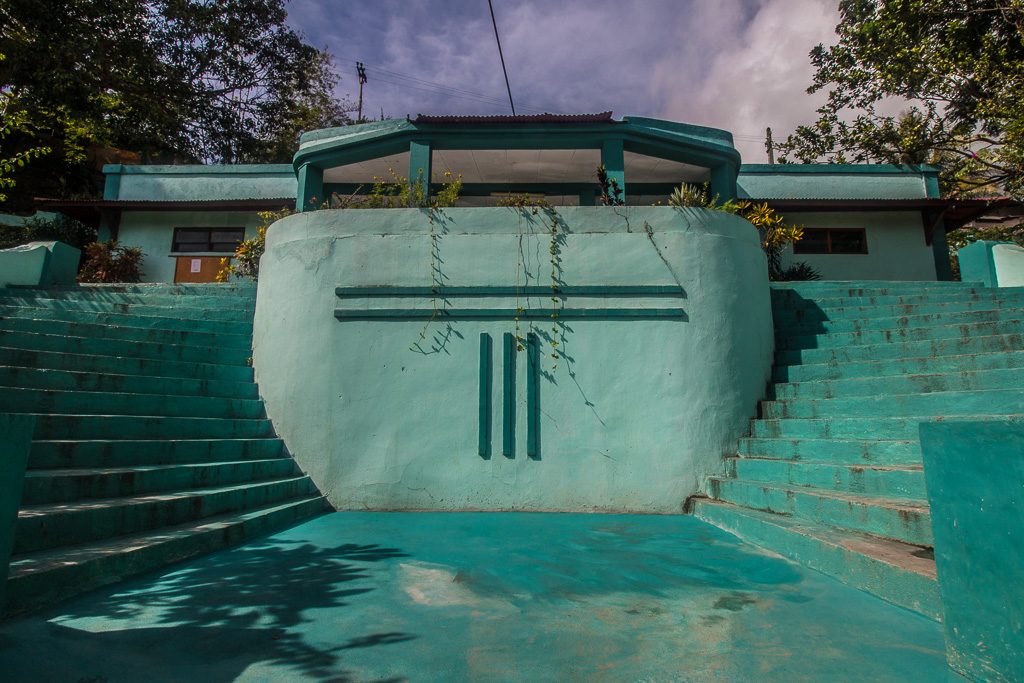 Crocodile Warnings On the Beaches

The old town of Baucau is raised above the shoreline on a plateau that looks out over the ocean. The beaches of Baucau were a short drive away, along a winding, pot holed road that led downhill towards the coast.

Small fishing villages are strung out along the coastline near to Baucau, and a rough track leads along the sands and through the fields and past sweeping scenes of rural life.

Thee water looked refreshingly inviting, but along the roadside intermittently were signs warning of crocodiles. East Timor’s beaches and coast look spectacular, but the island is home to huge populations of salt water crocodiles that can be extremely deadly.

None of the locals were swimming in the waters anywhere so I warily stayed back from the water’s edge and could only look out at the tempting ocean before me. 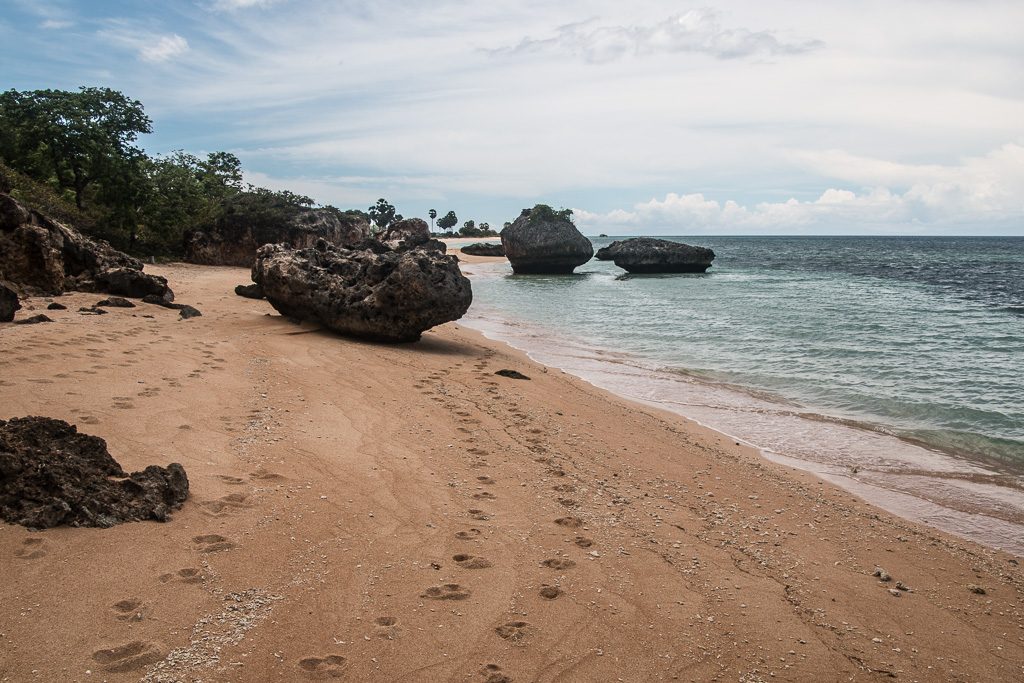 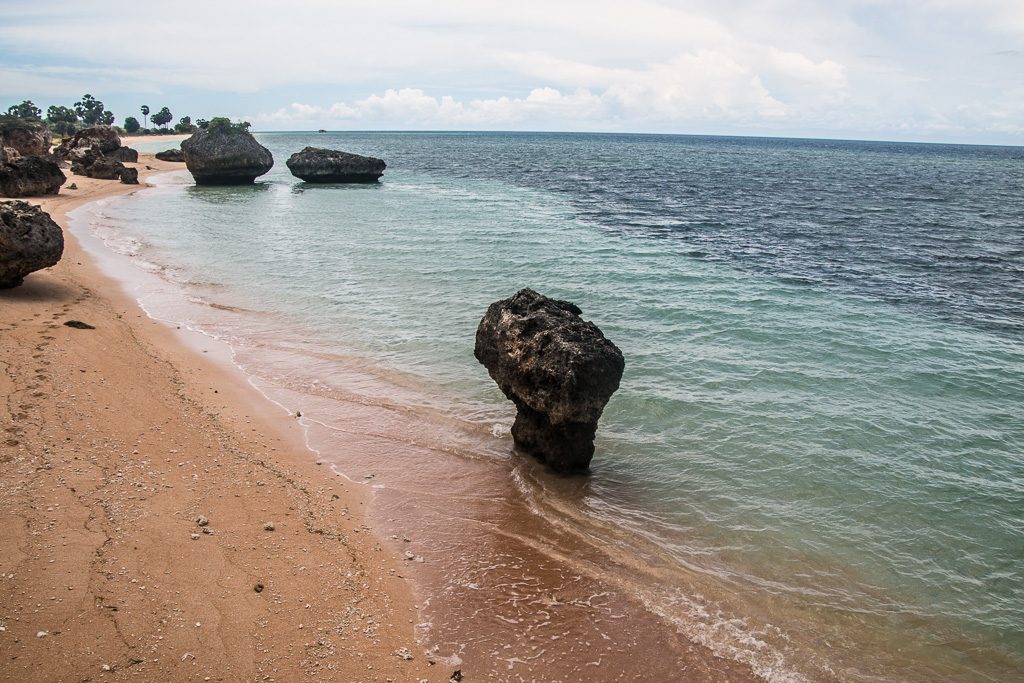 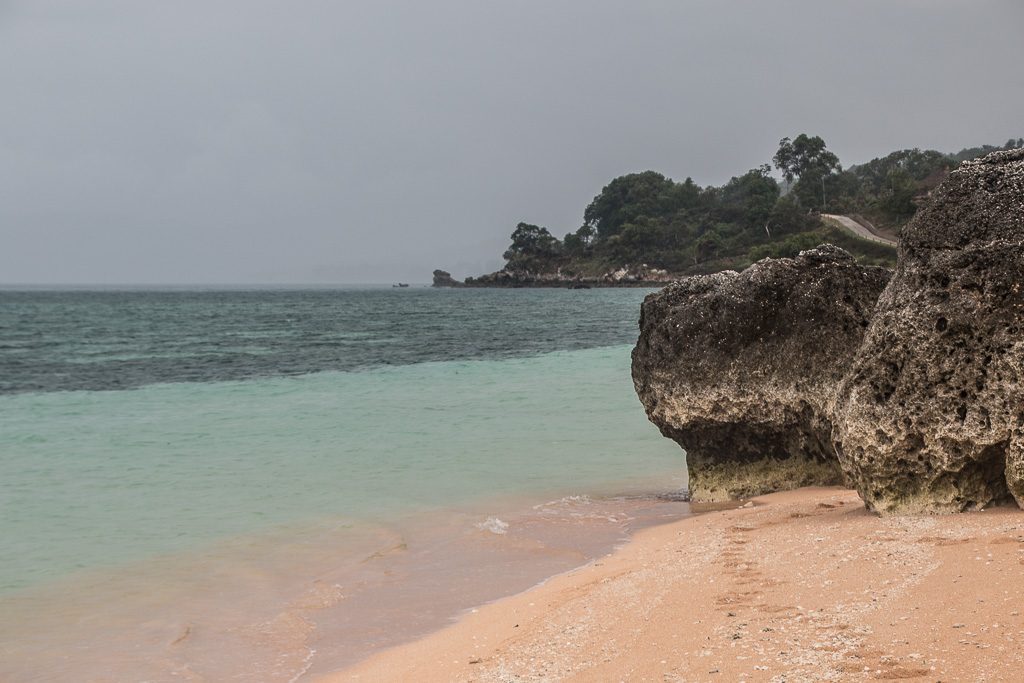 Back in Baucau, the main attraction is in fact the local swimming pool. While the ocean might be home to deadly crocodiles, the Piscina de Baucau was on the other hand a haven of cold, mineral spring waters in an olympic sized swimming pool.

And here there were no crocodiles.

This is an open air swimming pool that people in Dili would literally travel for hours to visit. It’s in a memorable setting and dates back years. The name Baucau in East Timor is synonymous with this swimming pool.

The water was refreshingly crisp, fed by mountain springs from the hills above Baucau and early in the morning I had the entire place to myself. Weekends and evenings though, were a different matter, as the Baucau swimming pool is filled with locals and visitors swimming and hanging out in the gardens around the edge of the water. 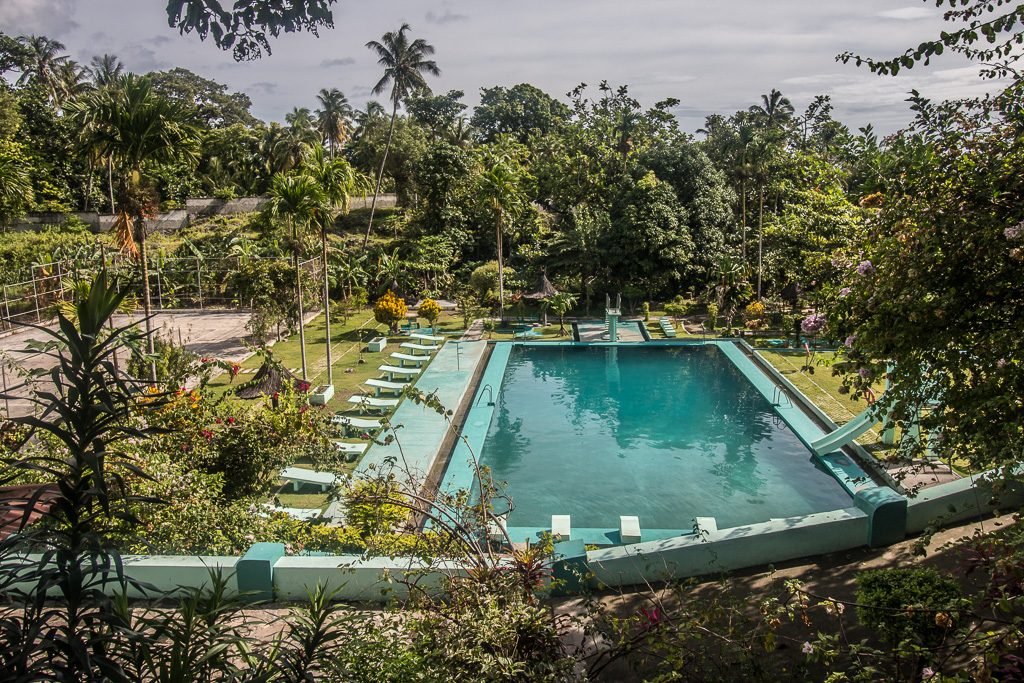 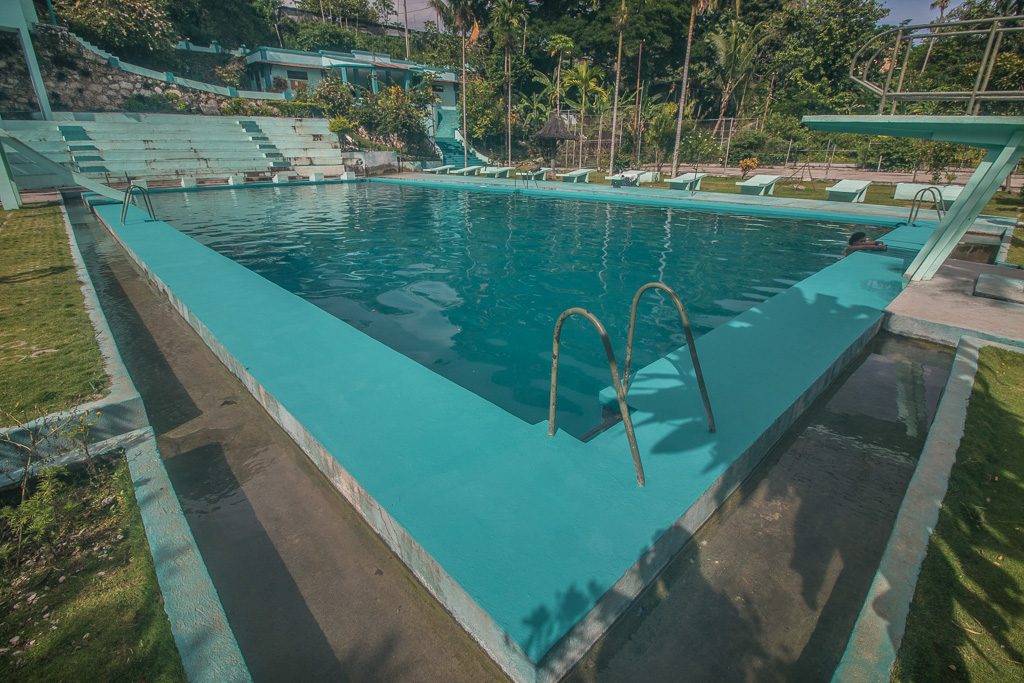 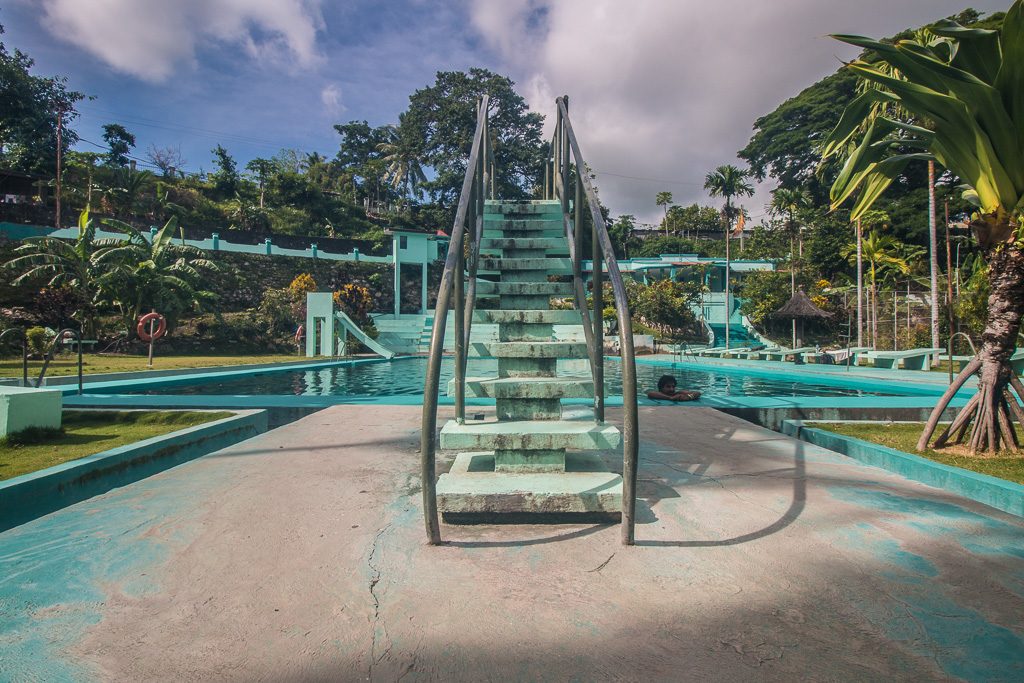 Into The Mountains Of Baucau

Baucau was a charming, ramshackle colonial influenced city, a vastly differing experience, vibe and atmosphere to the big city lights of Dili, a place to relax, to take in the coastal scenery and quiet rural life and to enjoy the open air swimming pool.

However, there wasn’t a huge amount to keep me in East Timor’s second city, and soon I was ready to get on the road again. But, rather than driving the broken, dangerous highway back to Dili straight away, I decided that it was time to drive up into the mountains that surround Baucau, to head away from the coast and to get amongst the high peaks and rocky summits of the interior.

I was going to find one of of East Timor’s highest peaks, a place known to the locals as Mundo Perdidio, which in English is The Lost World.

You can read about that adventure HERE.

Interested in travelling to Bacau East Timor but don’t know where to start or what to do? Then read on for my quick guide to all things Baucau!

How To Get To Baucau

Dili to Baucau is 125 kilometres, but the roads are rough and in places non existent. It can take time to travel between the two cities, no matter how you choose to travel. I rented a motorcycle from Hostel da Terra in Dili – they charged $17 per day. It took me eight hours with several scenic stops and I had two flat tyres on the way. Yes, it’s that rocky.

It’s possible to rent a four by four – which would makes things much easier and quicker – and even a driver when in Dili, although this can be quite expensive, especially if travelling solo.

There are regular busses to Baucau from Dili, departing from the Becora Bus Station in the eastern suburbs. They tend to leave early in the morning, but timings are unpredictable and they can spend hours cruising around trying to fill their seats. Again, journey time is also unpredictable, long and you miss out on the great scenery along the way. It is however the cheapest mode of transport.

Where To Stay In Baucau

Baucau’s accommodation options are fairly limited, but there are a few choices in the older, central part of town which are within walking distance of the few restaurants and the swimming pool. Most places unfortunately can’t yet be booked online, so it’s best to simply turn up.

Pousada de Baucau – This is the grand, colonial hotel, the centre piece of Baucau. It’s an elegant place, and rooms start at $60 and upwards per night. It’s the only place in Baucau with consistent WiFi too.

Tato Toti Guesthouse – This is a newer guesthouse, right next door to the Pousada and rooms here are basic, but cheaper, going for $35 per room per night, including breakfast.

Baucau Beach Bungalows – At the end of the road from Baucau which leads down to the beaches, a collection of beach bungalows are available, from $30 per night.

What To See In Baucau

Location of Baucau in East Timor: