That’s the name given to the high peak shrouded in cloud and fog that I was staring up at from its base in the mountains of the rugged interior of East Timor. The Portuguese explorers and traders that saw this peak from where I stood gave it the name Mundo Perdido when they first laid eyes on it and wondered what lay in the clouds far above.

It’s an apt name, a name that translates into English as the ‘Lost World’, a place surrounded in myth and legend that few people dare to ascend.

I couldn’t see the summit – I had no idea really where it even lay from the starting point far below. All I knew was that Mundo Perdido is one of the highest mountains in East Timor standing at 1763 metres in height, and that it would be a long slog to the top.

I was about to attempt that hike to the top, and I as stood staring up at the lofty heights above me I truly felt as if I was about to hike into a Lost World. 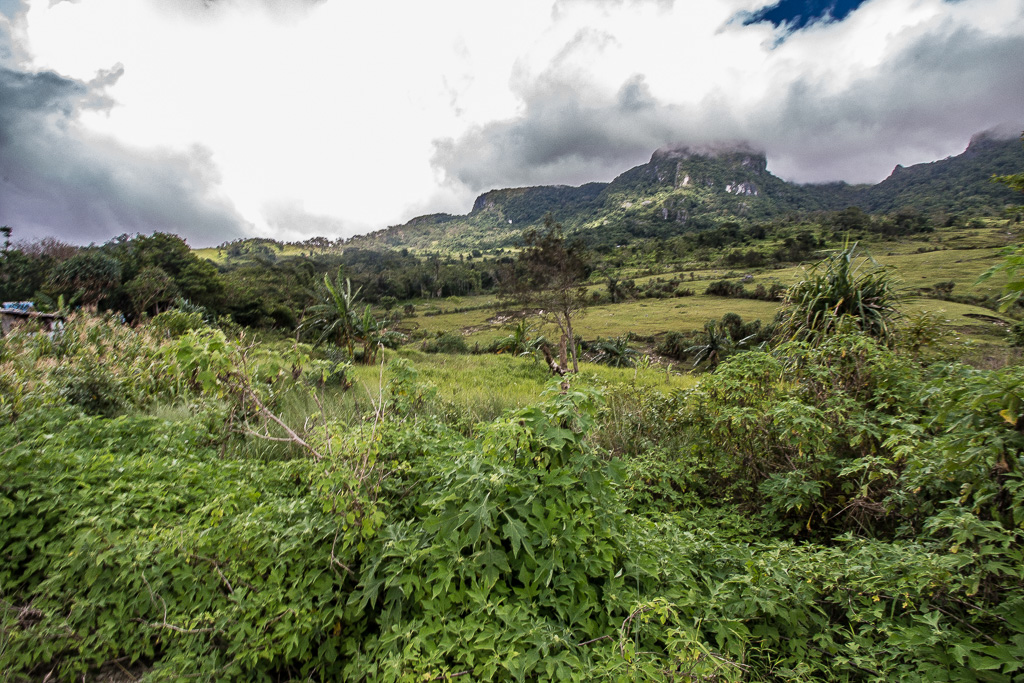 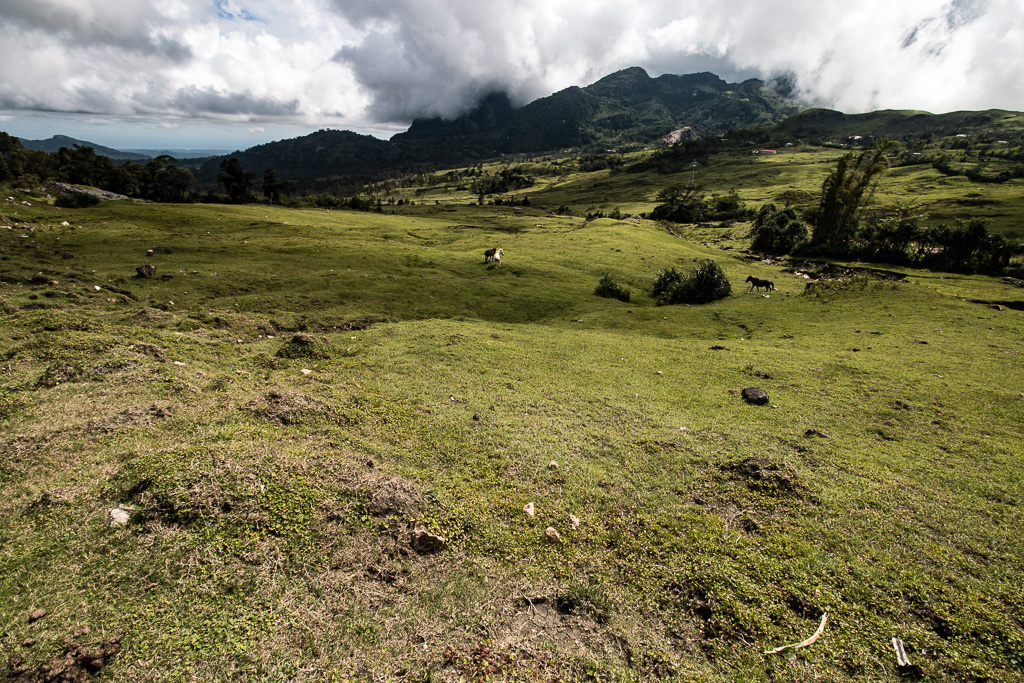 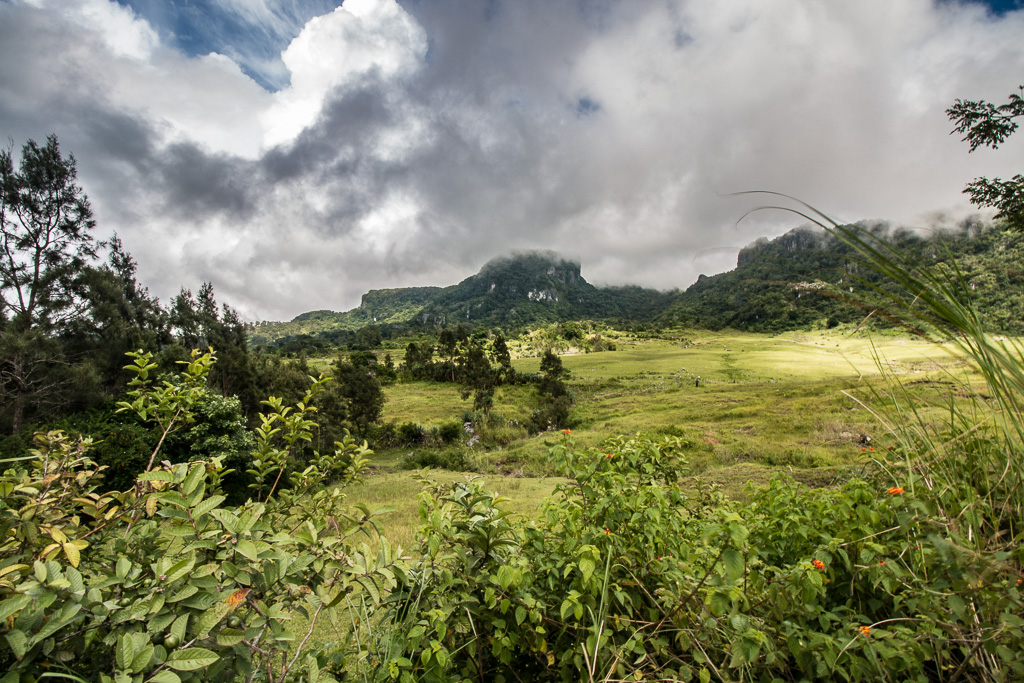 I was miles from the East Timorese capital of Dili.

I was miles from the nearest city, and I was high in the mountains of Luihuno surrounded by peaks and clouds.

For travellers, this really is one of the last unexplored frontiers in South East Asia. This is not a mountain that tourists often visit to climb. There was no guide book, no hiking maps or marked trails. Even Lonely Planet only mentioned this mountain by name but nothing more in its brief overview of the interior of East Timor.

It was an intriguing peak on the map, a place shrouded in not only clouds but intrigue too and I wanted to find a way to the top. If that was even possible.

I had set out from Dili two days early on a rented motorcycle, driving rough roads and riding first along the coast, and then sharply inland and ever upwards on winding paths through hills, then alongside the mountains.

There were just small villages, the odd old Portuguese Church and clouds as far as I could see.

For miles I had been able to see Mundo Perdido and its distinct, rocky form – the summit continually wrapped in fog and clouds – but with no more information, finding the trail – if there even was one – would prove more difficult. 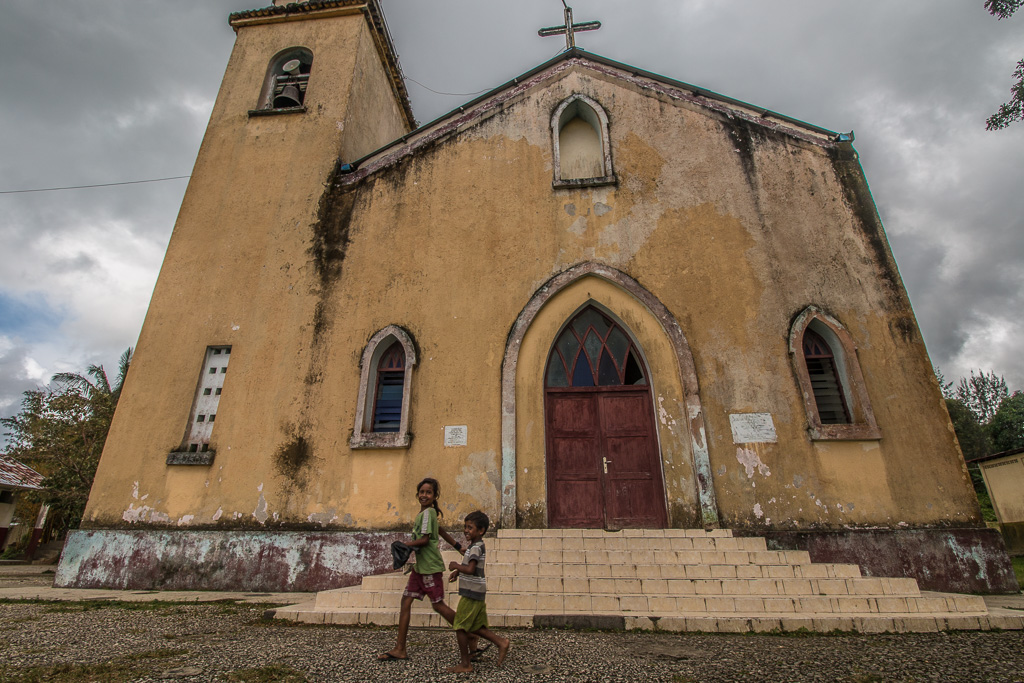 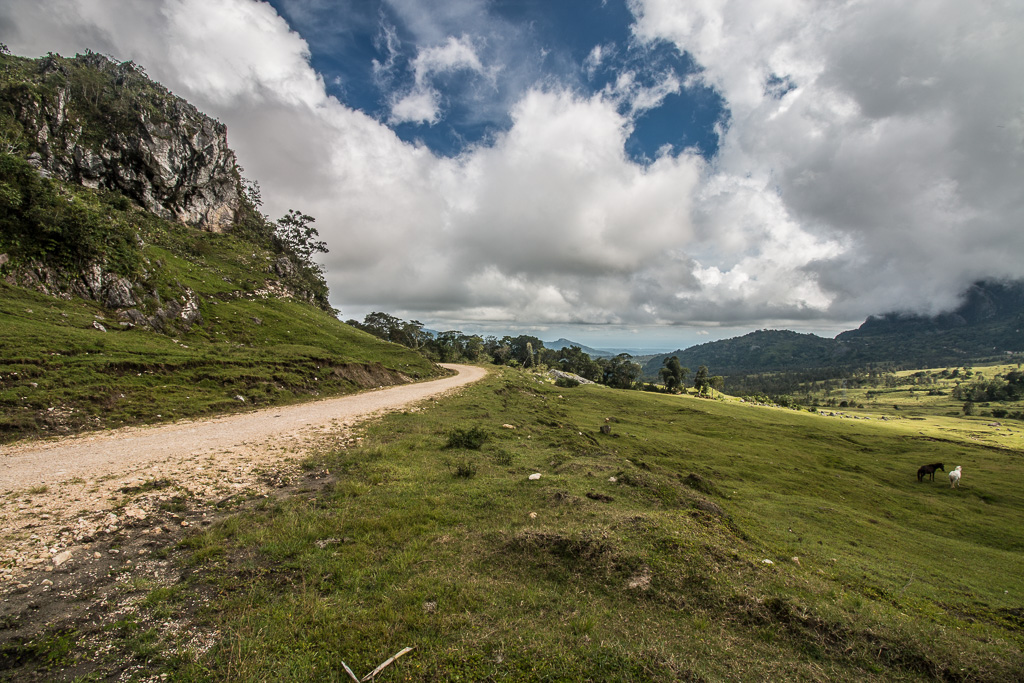 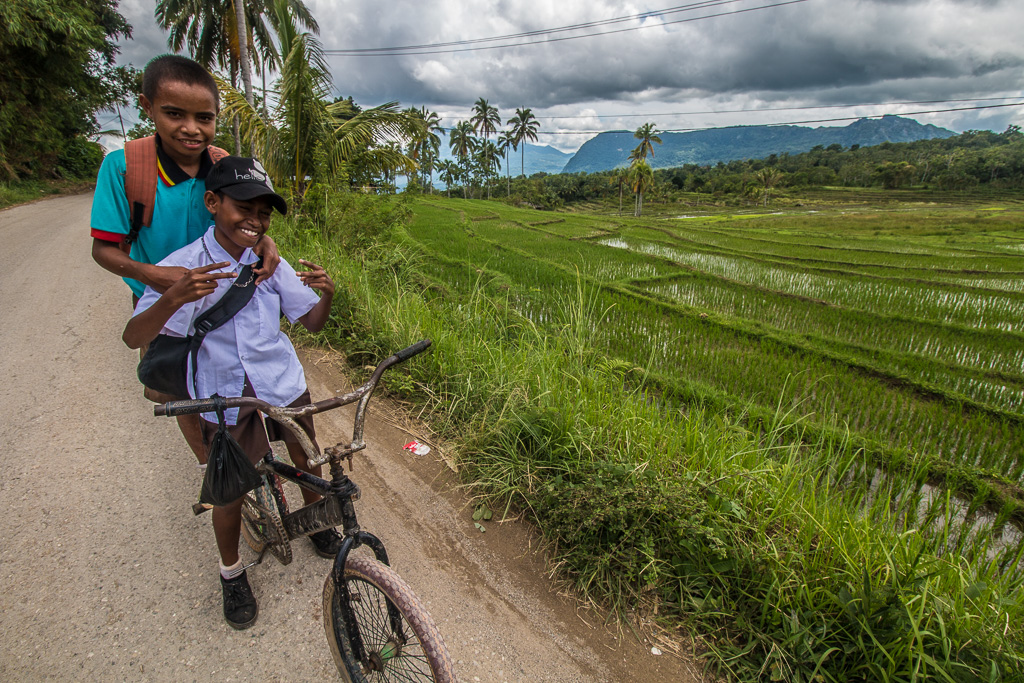 The First Challenge: Finding A Bed For The Night

I was travelling with my Brazilian friend Wally, whose Portuguese would prove invaluable along the road here.

We drove up into the mountains of the interior, but even covering the 50 kilometres from the coast to the village of Luihuno – which looked like the best place to begin any trek to the peak – took almost a full day of nervous driving.

As we drove into this ‘village’, the sun was setting and we found that it was more a long sprawl of houses and huts than anything more formal. We were in the shadow of the Lost World though, and in the morning we would try to find a way up.

This though is a region that has few hotels or guesthouses. As the light began to fade, we began asking around for somewhere to stay. Few people in East Timor speak English. Portuguese is one of the official languages in the country, however few people in the rural areas speak this – there is little need for it out here. Occasionally though, an older person would have enough knowledge of the Portuguese language – a throw back to the Portuguese colonial days when it was more necessary to speak it – and Wally could converse well enough with them to get some much needed information.

That evening an older lady came to our rescue, and after a broken conversation in Portuguese, Wally established that we could stay down the road at a local family’s house, where a man named Adriano who spoke fluent Portuguese would look after us and prove to be one of the most famous characters in East Timor’s recent history. 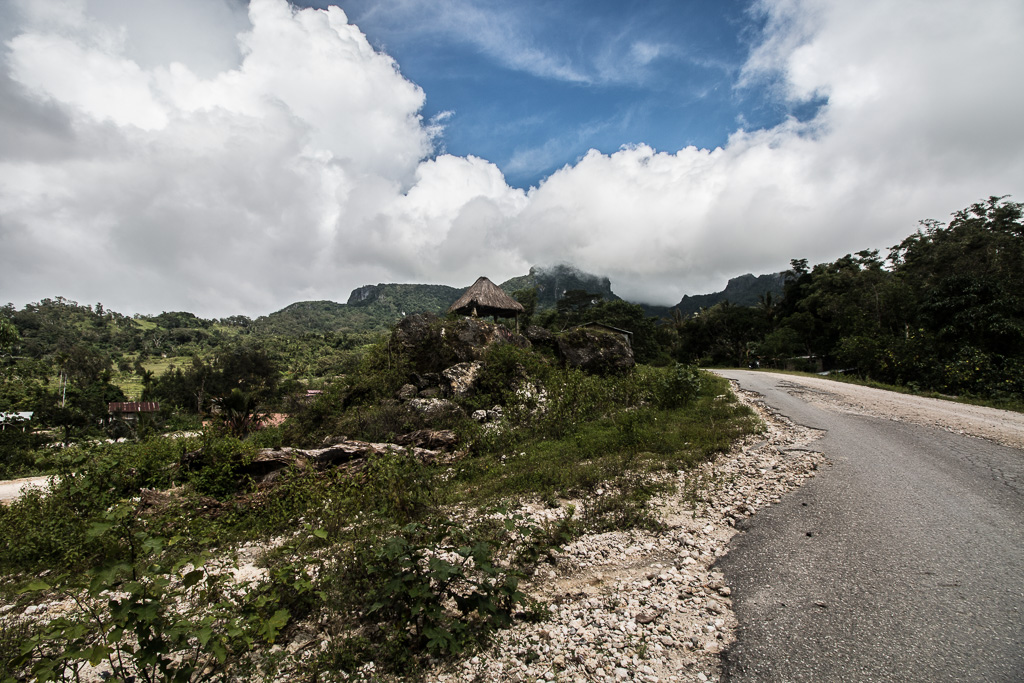 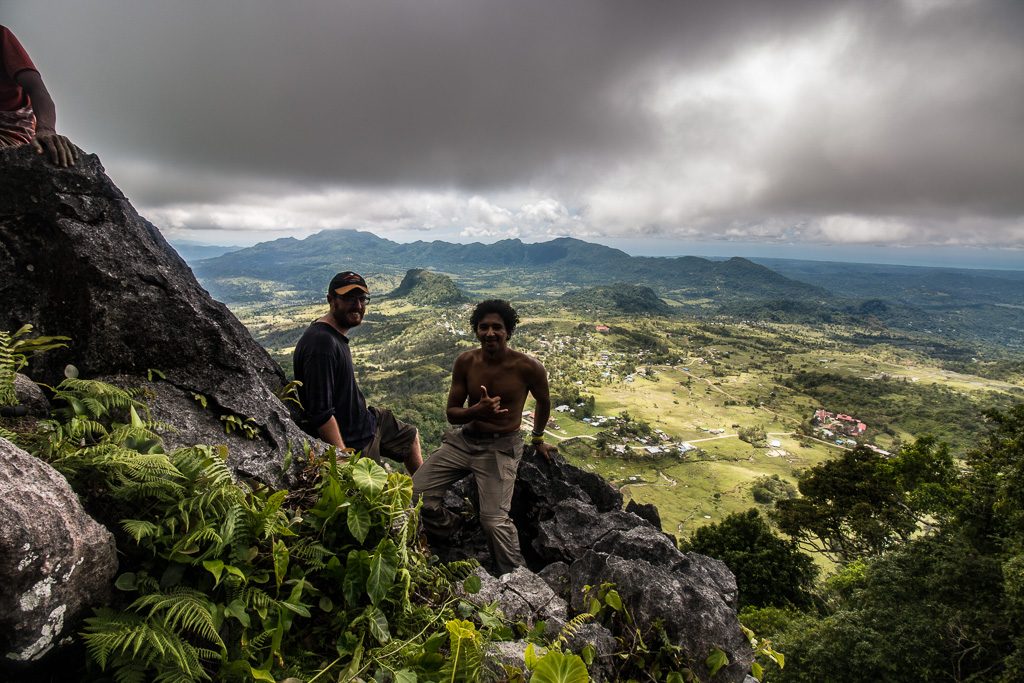 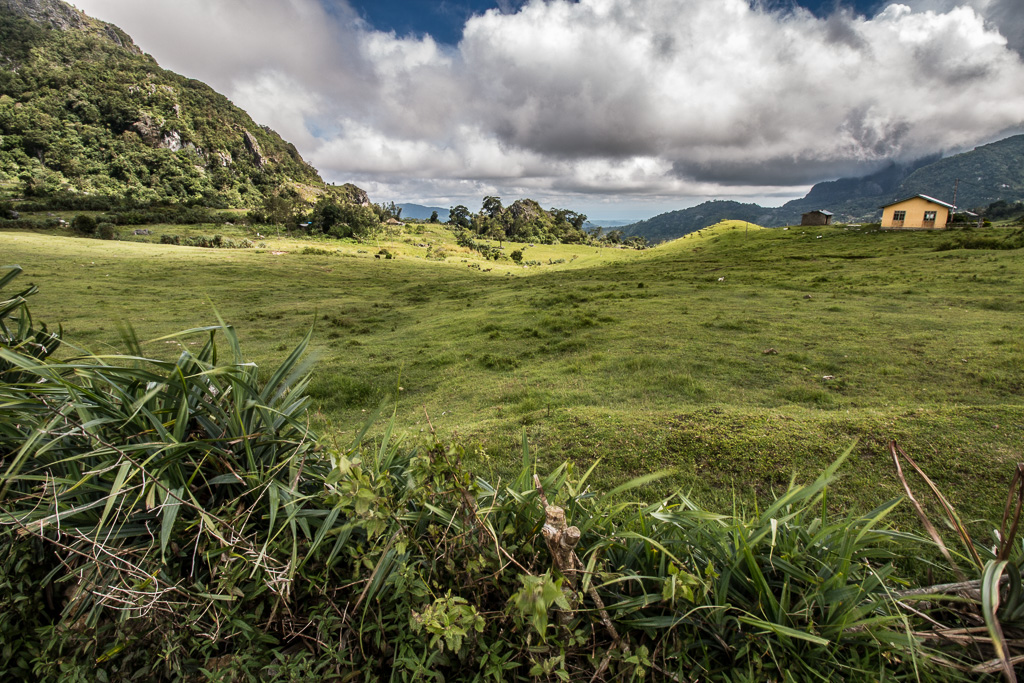 A Night In The House Of A Guerrilla Fighter

The mountains around Luihuno are so rugged and impenetrable that this area became an infamous battleground during the decades long struggle that East Timor waged against the Indonesian army that occupied the country from 1975 until 1999.

There are caves, hideouts and trails throughout the region that were used by the guerrilla fighters in their fight against the Indonesians. Many of the leaders of this small band of fighters went onto become high ranking members of the government after independence, but Adriano our host had wanted a quieter life after the war.

From his house, he pointed out the mountains where he had fought for the entire duration of the occupation. His war was a long one, and he spent the evening talking in fluent Portuguese to Wally, who translated into English for me the story of his life.

He lost friends in the mountains, but met his future wife there too. He fought for 24 years, straight out of school, and only in 1999 when the war ended could he settle down into a normal life again.

Adorning his walls were pictures of him meeting the President, being awarded medals and portraits of him in full battle uniform out in the mountains. He is somewhat of a celebrity in East Timor, but still he runs a construction company and rents out his rooms to the few travellers who pass through the village, a life far removed from his previous one.

Adriano’s story is an extraordinary one, but he humbled us by providing accommodation, dinner and giving us advice on how to hike to the Lost World. 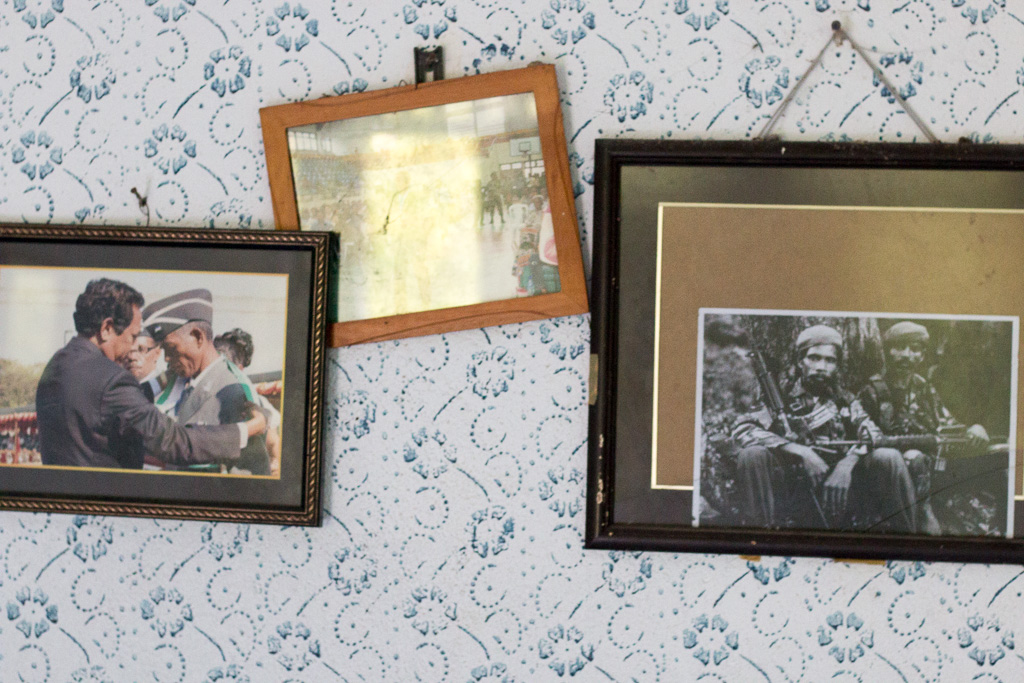 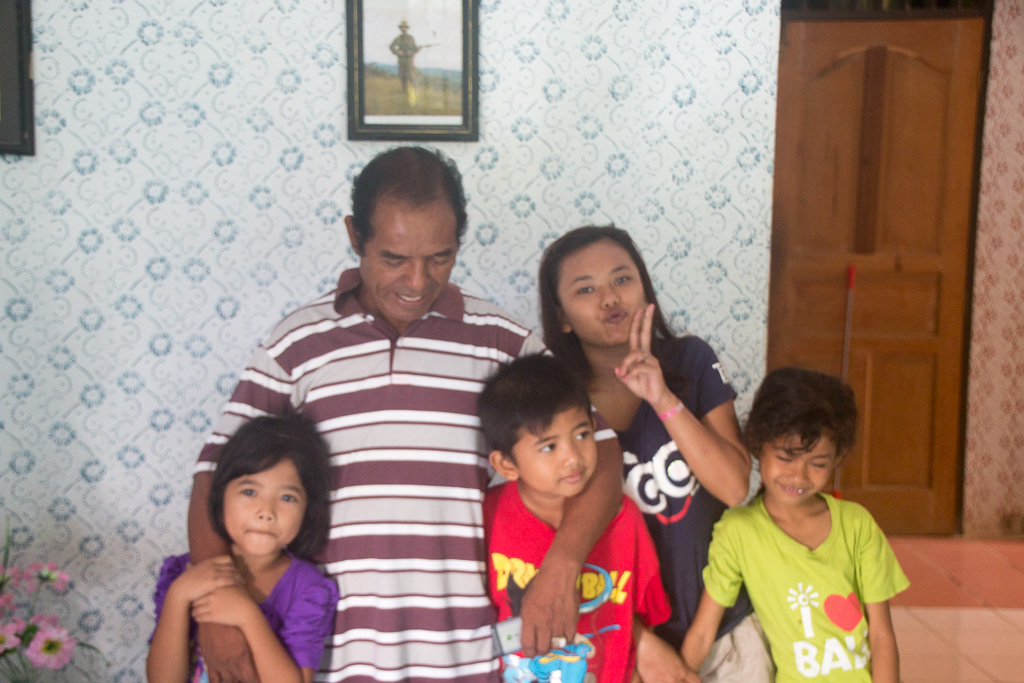 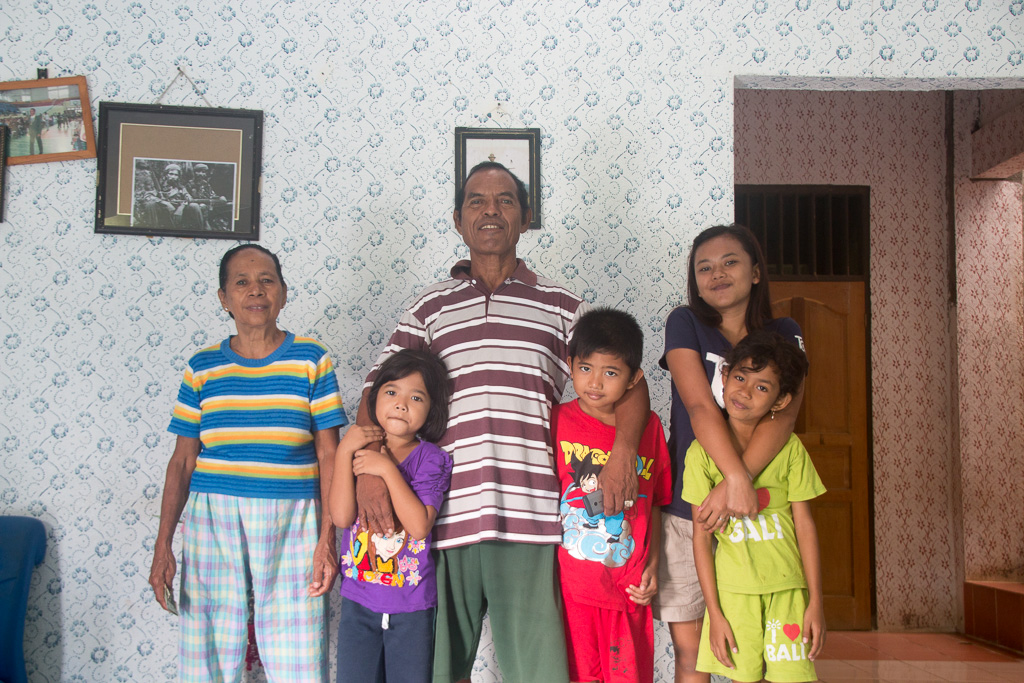 The Start Of The Hike

Even with Adriano’s detailed instructions, it was difficult to find the start of the trail which leads up the mountain.

We drove along the road looking for a spot that might lead up, but everywhere was overgrown and dangerously steep. Eventually we pulled in at a house at the base of the mountain and asked which way we needed to go to get to the top.

The whole family came out to say hello to these two foreigners in their midst, and before long we had a group of young, energetic kids ready to show us the way to the top.

Pandy, Jack and Zach showed us to the start of the trail. They probably should have been in school – if there was even one nearby – but instead they ran ahead of us, barefoot and jumping from rock to rock while we struggled behind them in the unfamiliar terrain.

These three kids were soon far ahead of me as the trail steepened upwards. 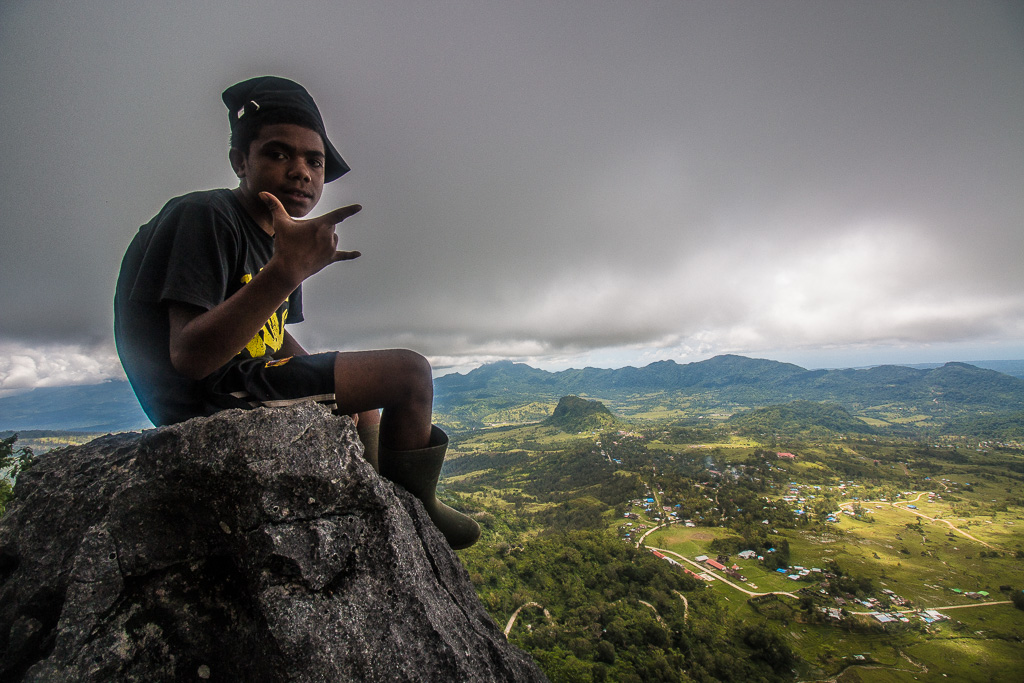 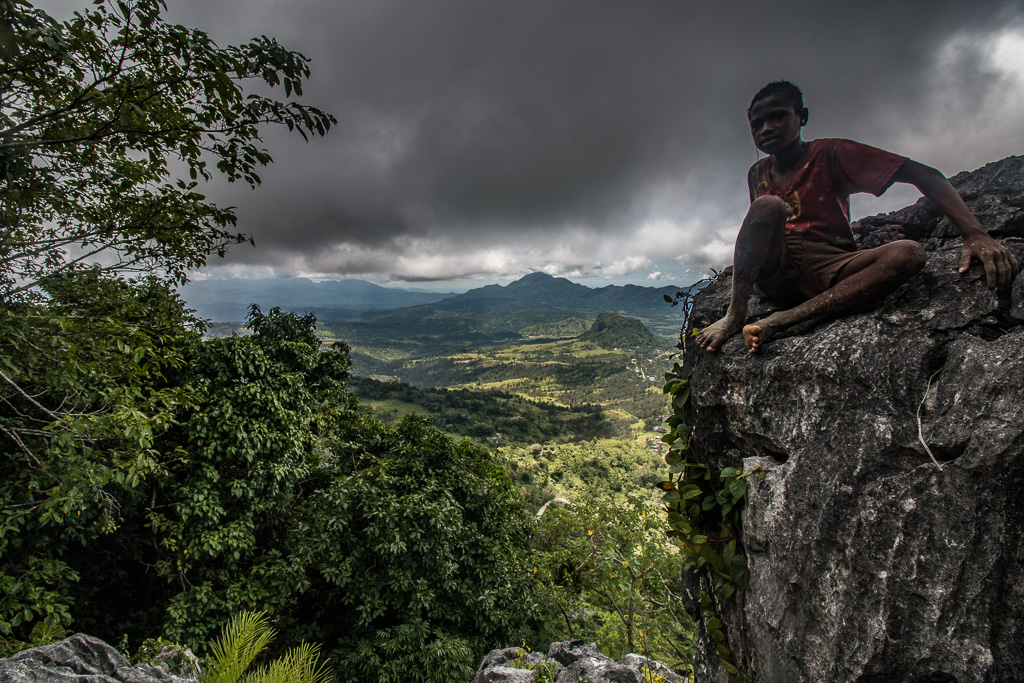 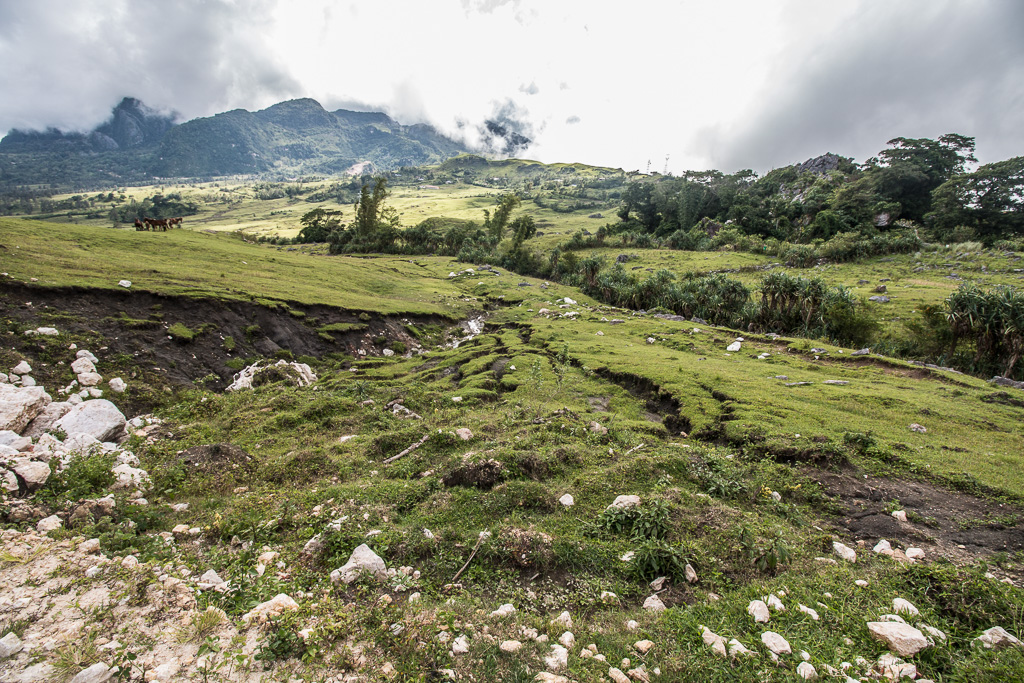 It was the end of the rainy season, and in East Timor that meant it would still rain every day. The trail was slippy and muddy in places, but still solid enough for the most part. The clouds though were ominously grey above us and we wanted to get up and down as quick as we could before the rain was inevitably unleashed upon us sometime in the afternoon.

The kids led us ever higher up, and after an hour and a half of hiking we hit a plateau. They jumped from rock to rock, across the huge limestone karsts that form the mountain, some jagged in places, others with sheer drops below.

I picked my along the route, carefully but surely, until I could go no further.

Ahead of us were clouds, but when they cleared momentarily, this Lost World opened itself up to reveal a spectacular view across the valley below and out towards the mountains far ahead.

We paused for rest and the kids took our cameras to climb up the precipitous rocks and the hanging trees to take pictures of us and them, laughing at their pictures and asking for selfie after selfie. 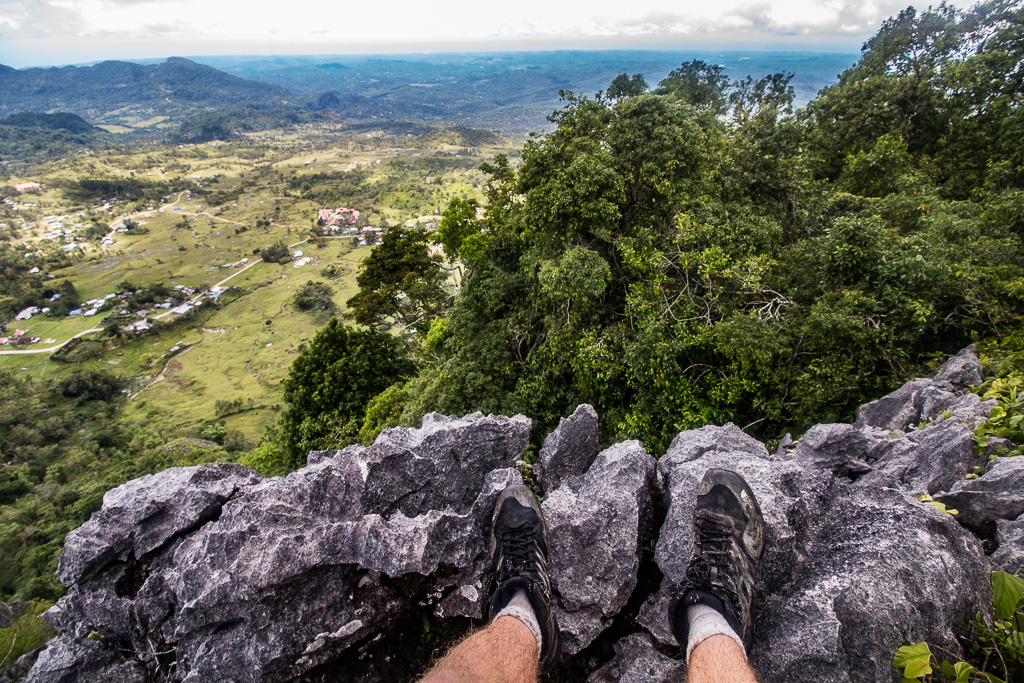 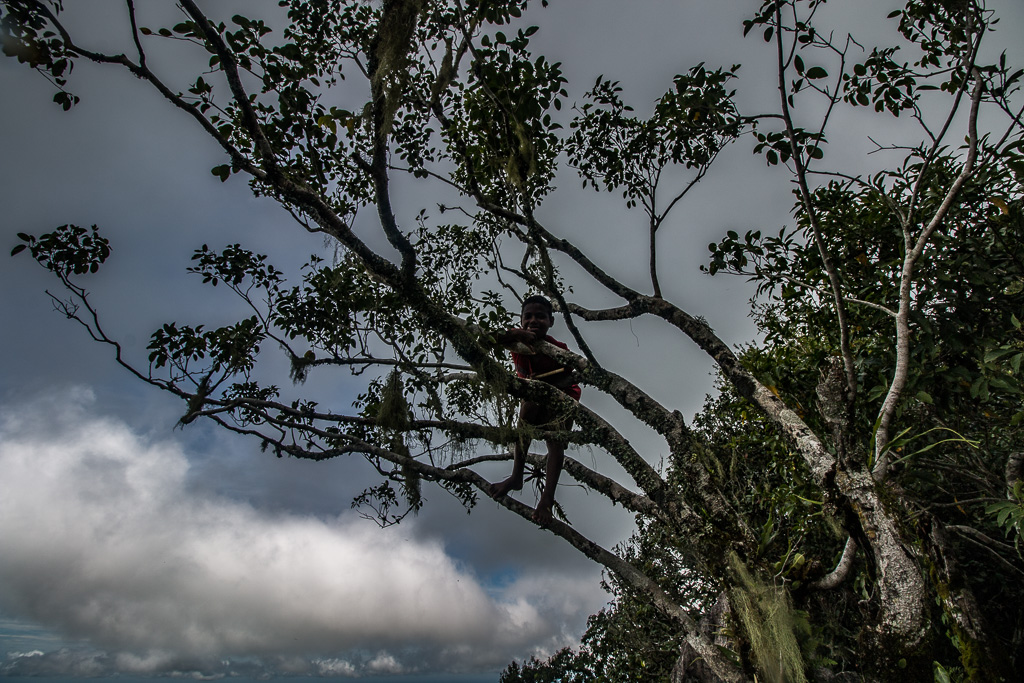 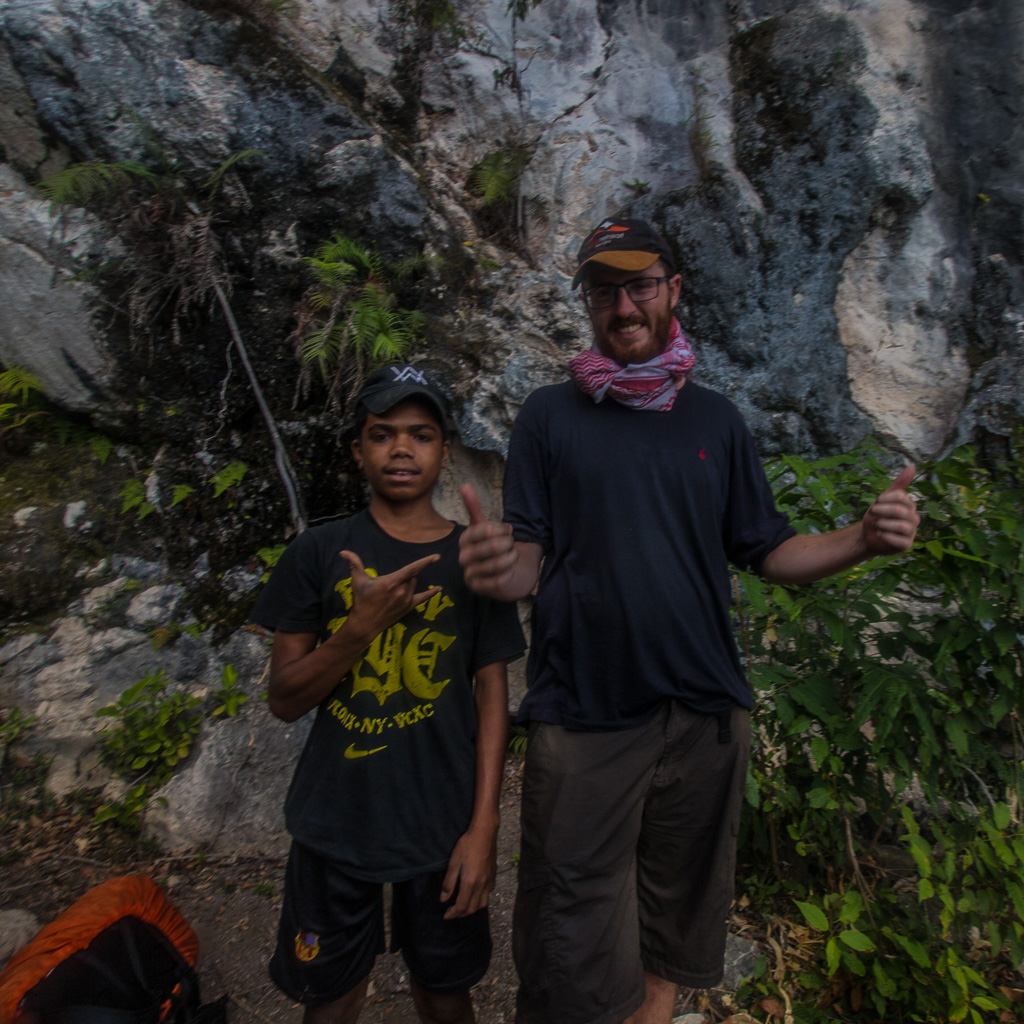 The Fog Closes In

Adriano had said before we left that the trek would take at least five hours there and back. So far we had spent two hours up on the mountain, but this wasn’t the summit. That was still further up, surrounded and hidden in cloud.

The kids began to lead us along the trail again, away from the spectacular viewpoint and into the trees. The mountain is rocky, and soon we were not walking but climbing up and over, carefully treading over long drops and along narrow footholds.

Before long though there was too much fog around us to really see where we going, and ahead of us it looked even worse. The locals believe that the fog is a spirit that can steal your soul away from you. That’s just one of the reasons this mountain top is called the Lost World. It is not an inviting place in the wrong conditions.

We couldn’t see the summit, and it was becoming ever more dangerous staying up here.

The kids too were nervous, and soon they turned us around and we began to head back down the mountain, not even knowing how close we had really come to hiking to the top. 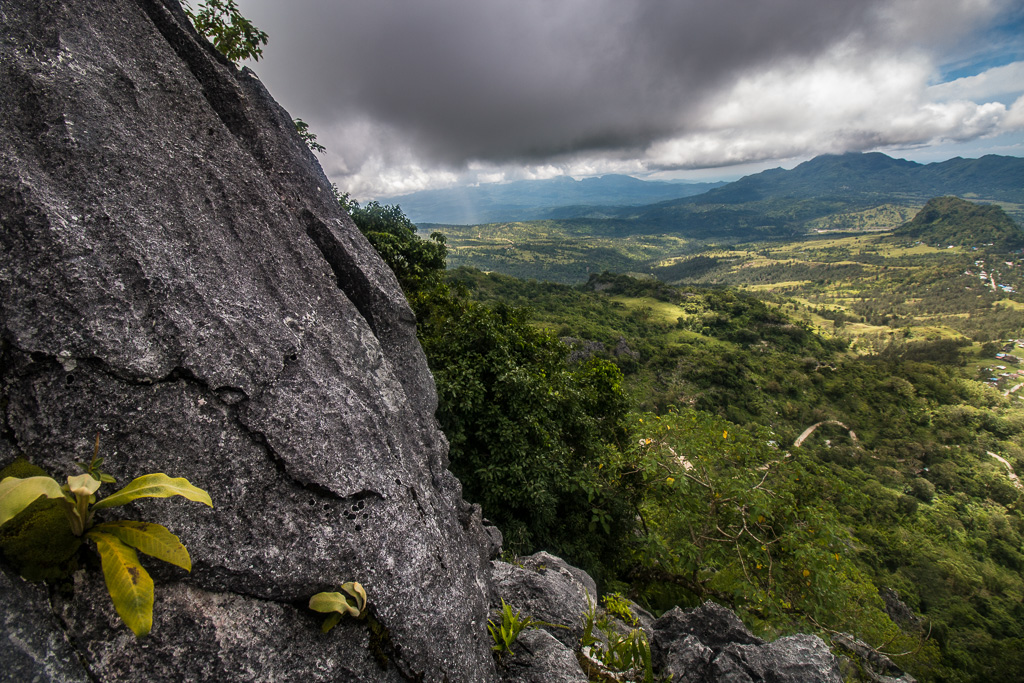 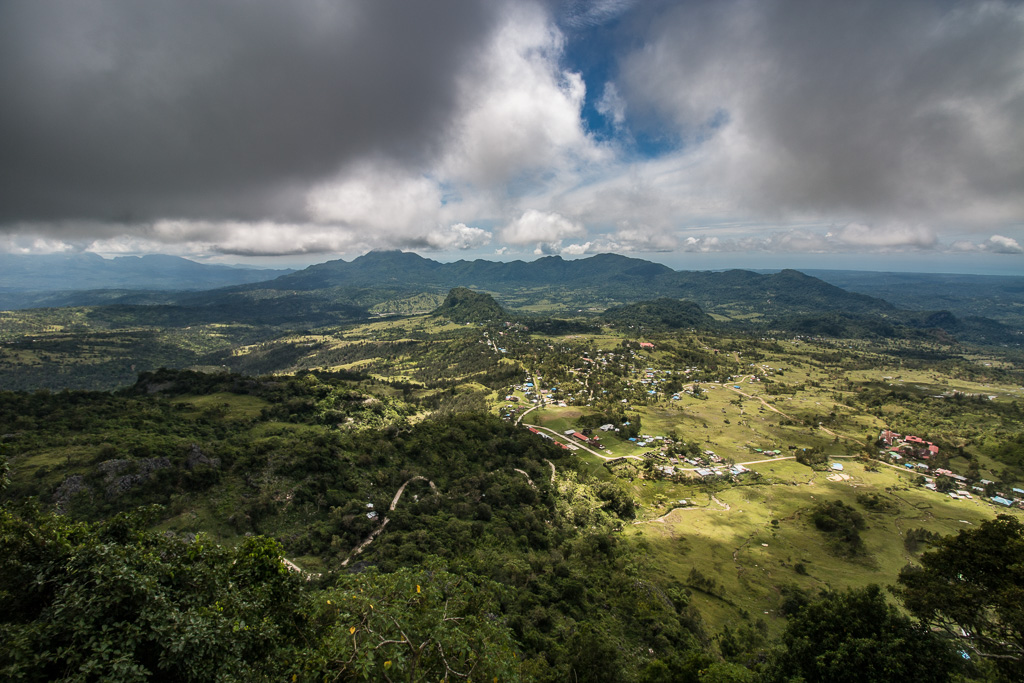 The Rain Comes Down On Mundo Perdido

We were escaping the fog and the clouds, in a race back down the mountain before the rain came down.

We had turned around too late though, and as the first drops began to fall we took shelter under a huge overhang of rock that looked out over the valley.

Then the rain came down hard on Mundo Perdido.

The clouds burst above us, and water came streaming down the rocks.

We waited on the side of the mountain, but it looked like it would never clear. When it let up – but didn’t stop – we made a move, treading our way carefully along the now muddy paths down, slowly becoming ever more drenched in the rain.

It was a slog downhill, and the at the start of the trail the fields we had walked through earlier were now completely waterlogged. Everything I had on me was soaking wet, and the rain was coming down even harder than before.

The kids led us back to their house, where the family already had a small fire going and were cooking up a huge batch of noodles while they watched Indonesian karaoke on the television.

They offered us hot coffee and hot bowls of noodles while we shivered and warmed up inside. The whole family gathered around to hear our story of the trek upwards, the grandmother translating from Portuguese to the local language so everyone could understand.

We had escaped the fog, but we hadn’t escaped the rain and we waited in the hospitality of the locals who live in the shadow of the Lost World for hours until the rains stopped and we could return to Adriano’s for the night.

We hadn’t made it to the summit of Mundo Perdido. The mountain and the weather had beaten us. Mundo Perdido lived up to its name, the peak really is a lost world, and one that will remain – for me – a place of mystery and intrigue. 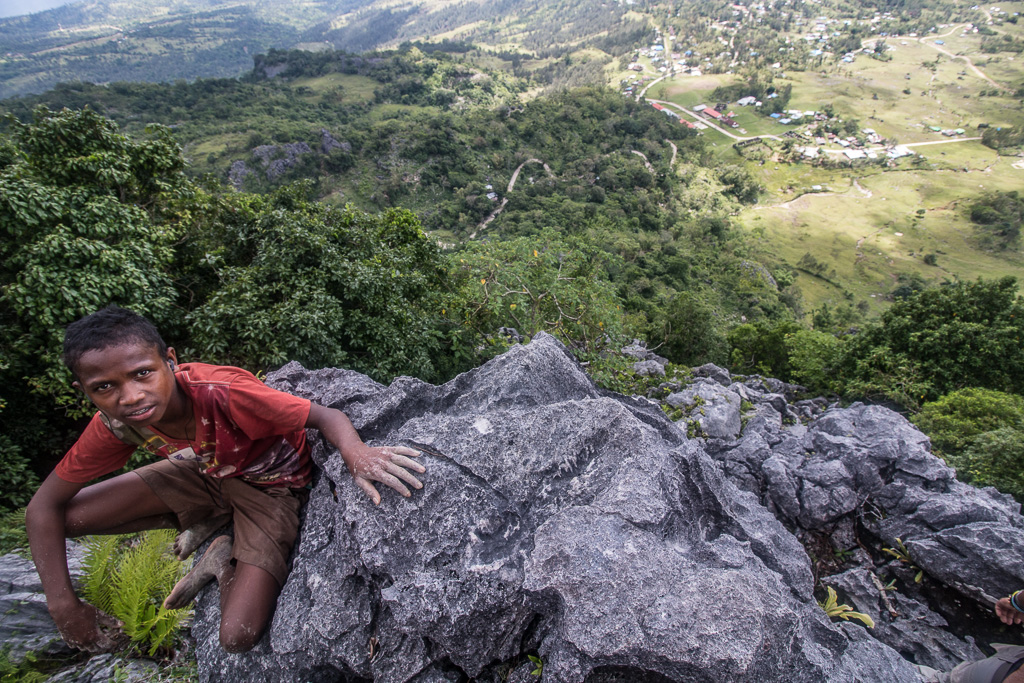 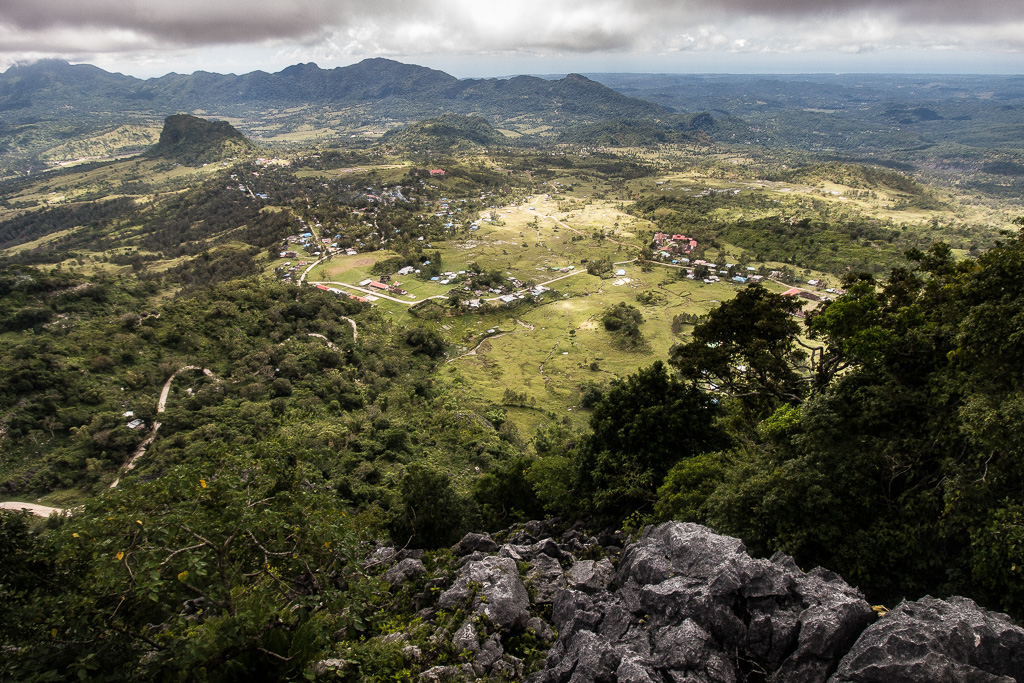