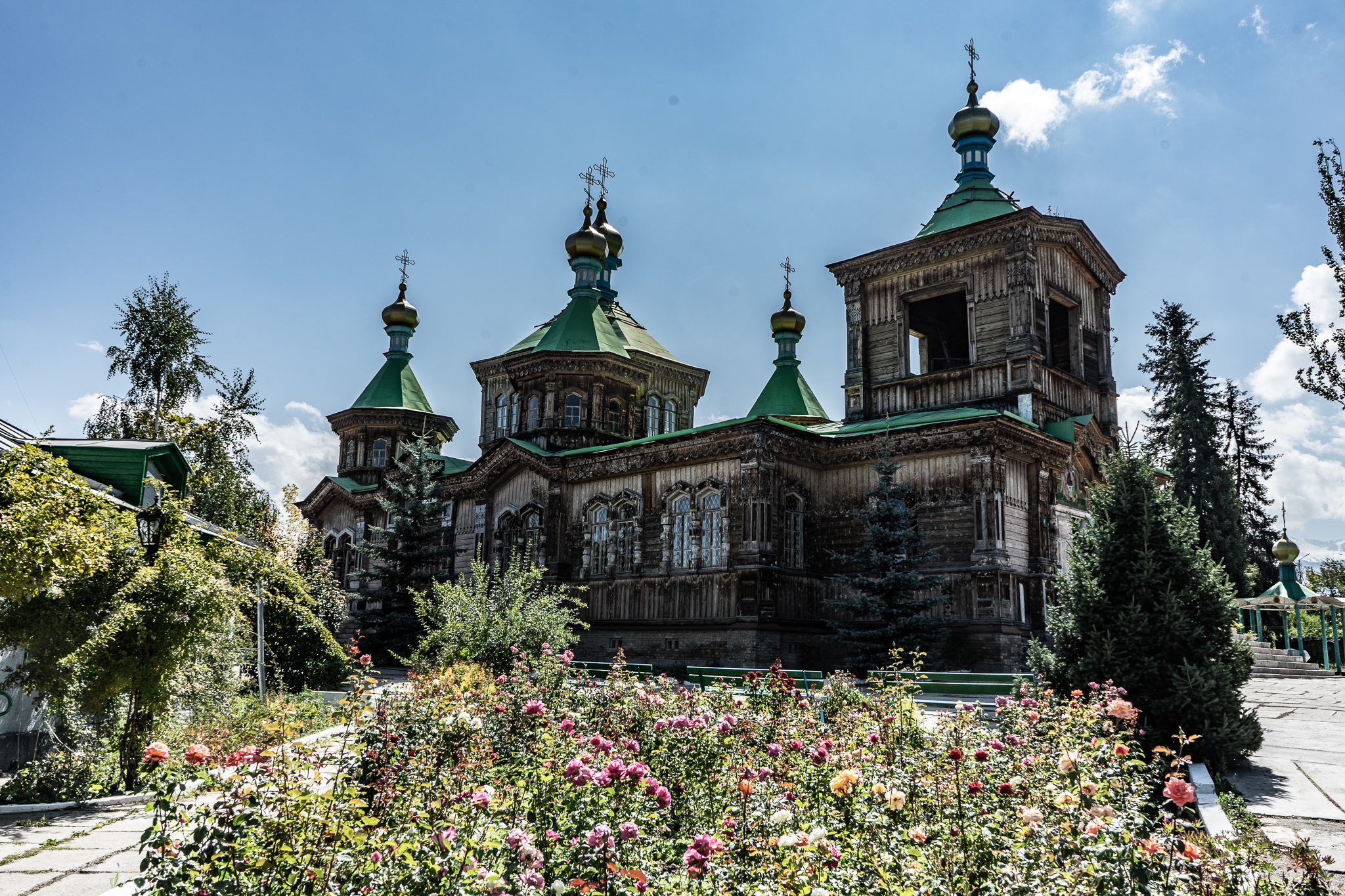 As far as the ancient Silk Road goes, Karakol in Kyrgyzstan is a young settlement, but this is today one of the largest cities in the east of the country.

Found on the edge of Issyk Kul Lake and being the capital of the region of the same name, Karakol is a city that grew from almost nothing into one of the most important centres for trade and commerce on the borders of the Russian Empire within just a few decades in the mid 19th century.

In Kyrgyzstan, Karakol holds its place as a dynamic and multicultural place, a city built on immigration from both east and west, and a city that is awakening to tourism. With the help of Karakol’s locals, I went on a walking tour through the city to uncover what the diverse history of this former frontier outpost, and what the future may hold for the diverse peoples that call this place home. 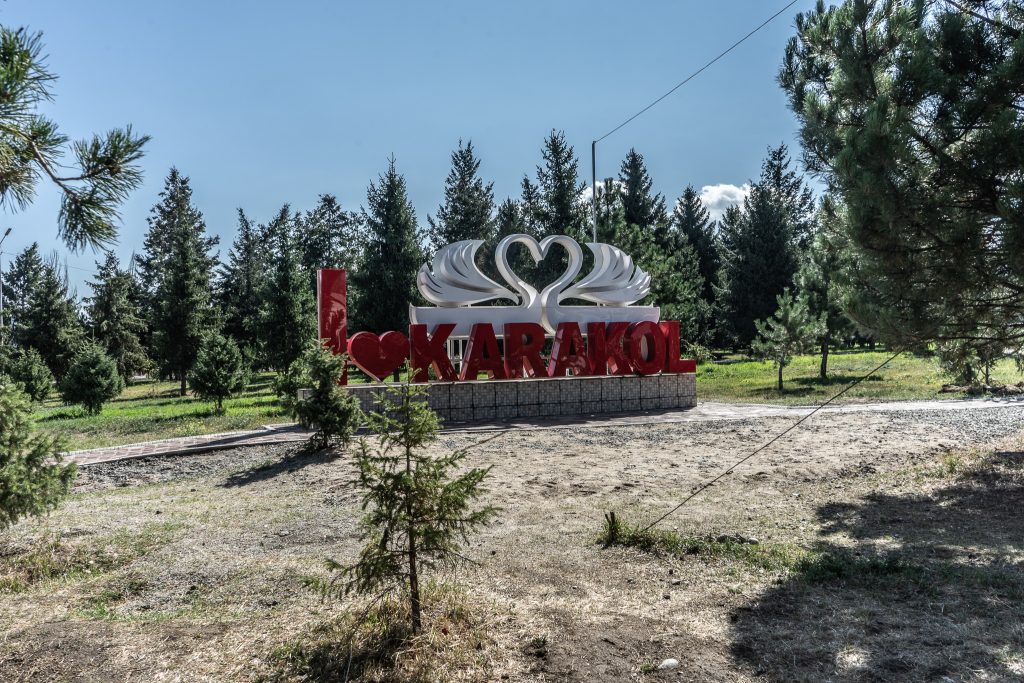 Karakol: An Outpost on the Russian Frontier

In the centre of Karakol, surrounded by Soviet-era apartment blocks and aged government buildings, local student Amman tells me the history of his city as we gather around a stone marker that’s engraved with the date, 1869.

“This was the year that Karakol was founded”, says Amman. “At first it was just a military outpost, and the local Kyrgyz people in the region were still nomadic. Then came the Uighers, the Uzbeks, the Tartars and then the Russians, Ukrainians and Chinese”.

Although the Issyk Kul region had long been the home of nomadic people, few people had permanently settled around the lake until the Russian Empire arrived. Karakol became of a product of the vast expansion across Central Asia as the Russians, losing in the Crimean War in the west, turned their eyes east. Karakol was as far as the empire would expand here as beyond the city, the imposing Tien Shan Mountains rise dramatically to form the border with modern China.

Amman explains how there are more than twenty different ethnic groups in Karakol, and that today it’s the fourth largest city in Kyrgyzstan. It’s a diverse and multicultural city, where different languages are spoken and where different cultures and traditions have mixed in an unusually short period of time.

The Russians encouraged immigration to this far flung corner of the Empire, and when the Soviets took power, they did the same, as well as deporting people here from across the Union. Much of the city as I could see from the main square, was built by the communist government after World War II, as they rapidly expanded Karakol in the 1950s and 1960s to give the city centre a very Soviet look. 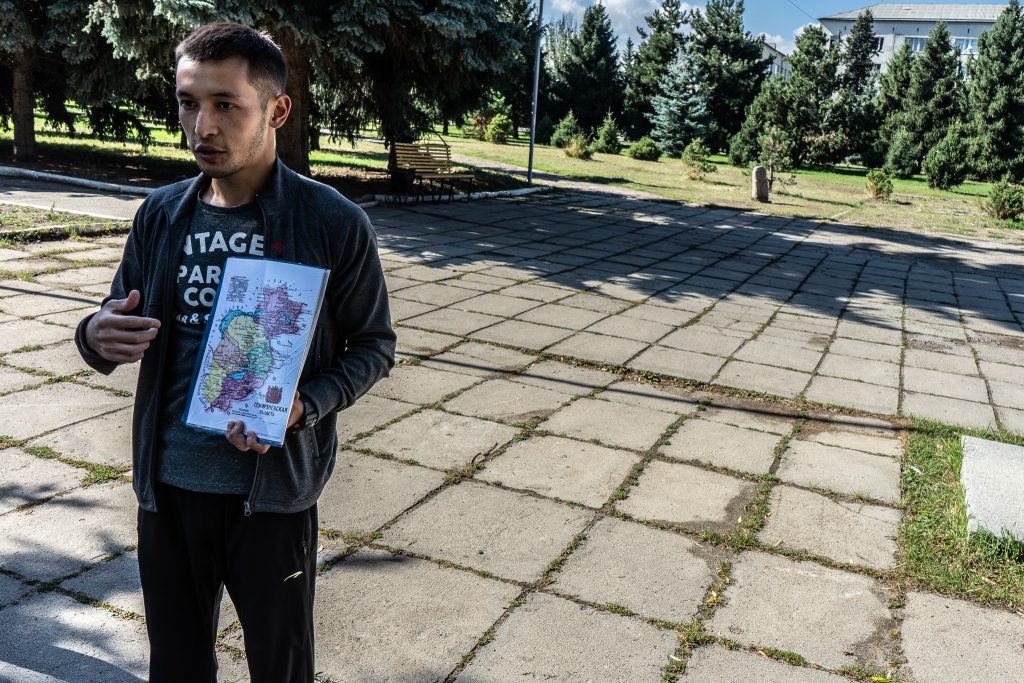 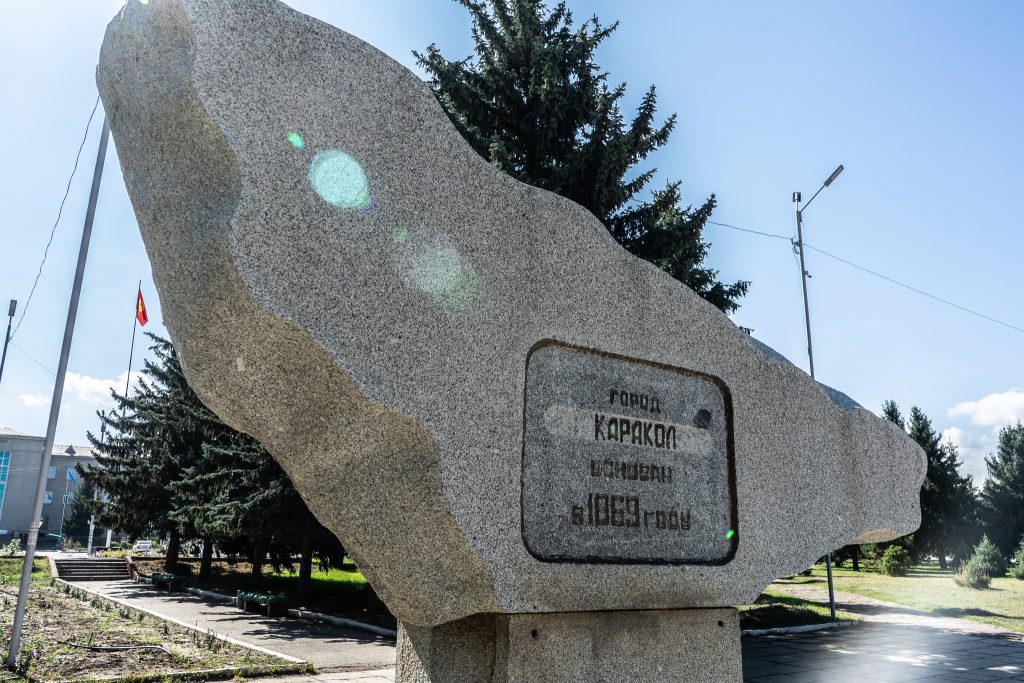 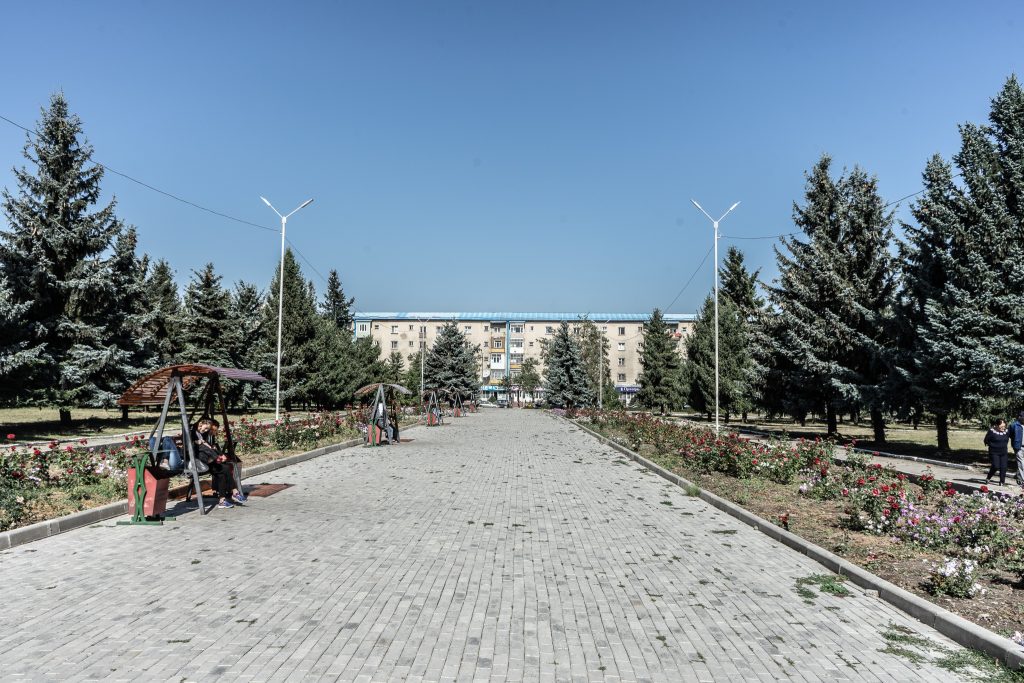 The Museum of Karakol

Next to the main square though, we walked past the very un-Soviet ‘I Love Karakol’ sign, on our way towards a charming cobbled street which is the home of one of the city’s oldest buildings, a building which holds the local history museum.

Founded in 1887, the Museum of Karakol holds exhibits and archaeological relics from across the Issyk Kul Region. Many were collected by the Russian explorers who first began to chart the region for the Czar and who eventually collated enough objects to house them in the museum shortly after Karakol’s founding.

Those explorers whose research begun the museum were also one of the main reasons that this particular site grew into the city. The military outpost established here was primarily run to supply the Russian cartographers and scientists who were venturing on expeditions into the nearby Tien Shan Mountains and further into China, while the lakeside location ensured that it would quickly become part of the extensive trade network that heads from east to west, the trade network we know as the Silk Road.

As well as the historical objects demonstrating the city’s origins, the Museum of Karakol is home to an intriguing photographic exhibition that showcases the work of Ella Maillart, a Swiss adventurer who was one of the first photojournalists to travel through Central Asia in the 1930s. She could even be said to be one of the first true tourists in Karakol too.

Ella recorded much of the daily life in Karakol and across the wider Russian provinces at a time when traditional life was at a crossroads, and her photographs of Karakol show a side of local culture that is in many ways gone after the ensuing decades of Soviet influence since her journeys here. 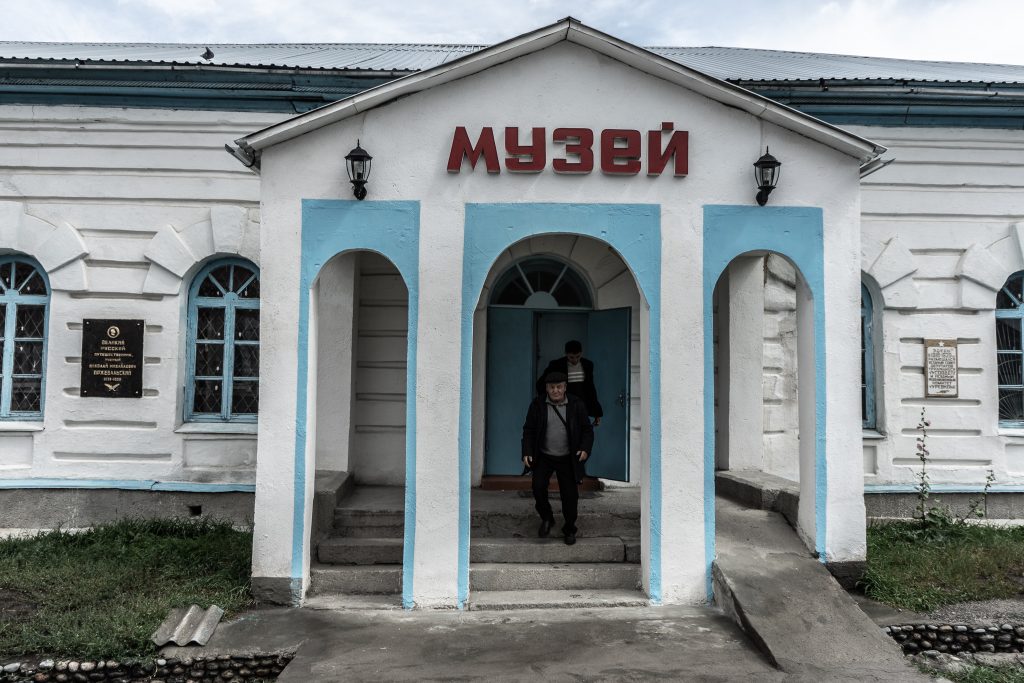 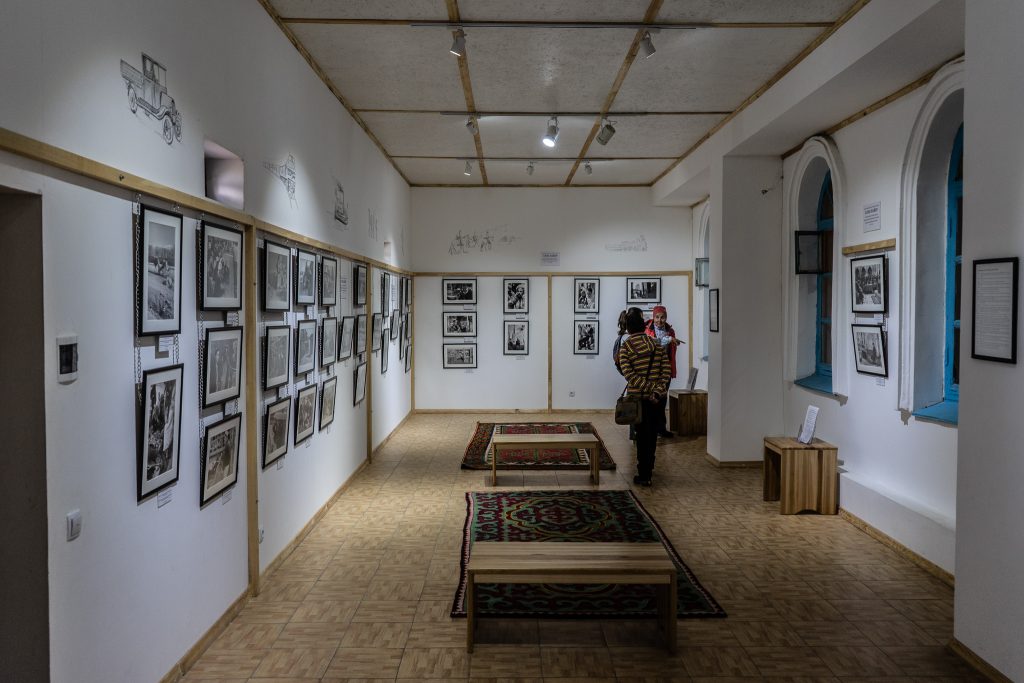 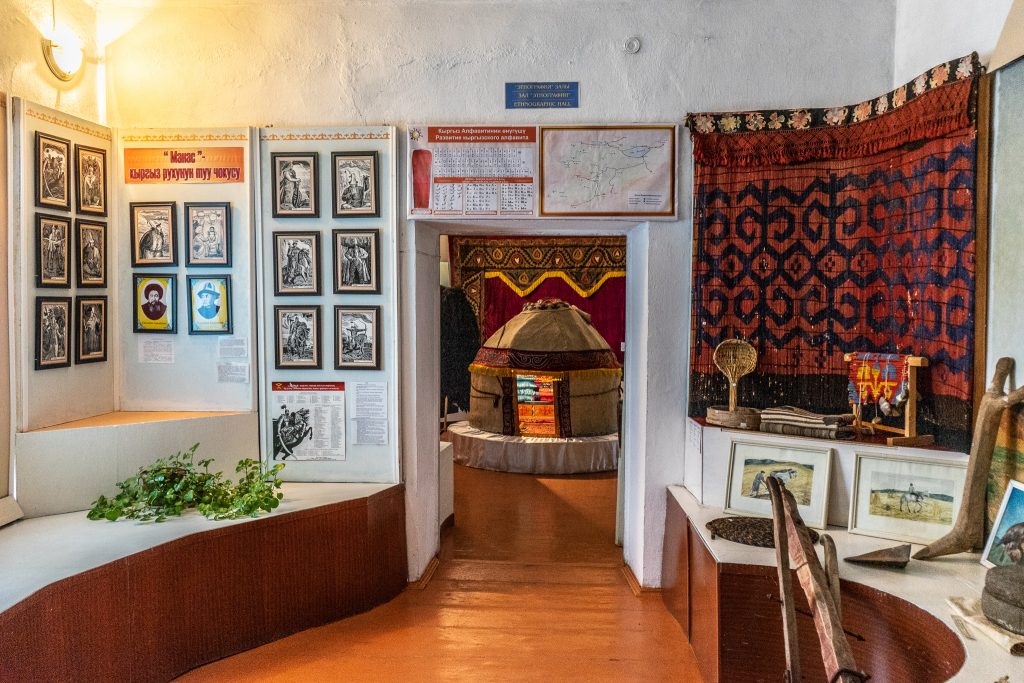 A Shop of Soviet Relics

Amman next took us to a nearby shop, an antiques store that although just a fraction of the size of the Museum of Karakol would prove to be every bit as interesting, because this was a store that bought and sold Soviet relics.

Plastered across the crowded walls were propaganda posters from the last century, while busts, paintings and portraits of all the infamous communist personalities were dotted around the shop, including Lenin and Stalin and many more minor party members that at one point in history would have been well known here.

There were coins, typewriters, cameras and books from the socialist era, demonstrating how tangible the recent Soviet past is in Kyrgyzstan. 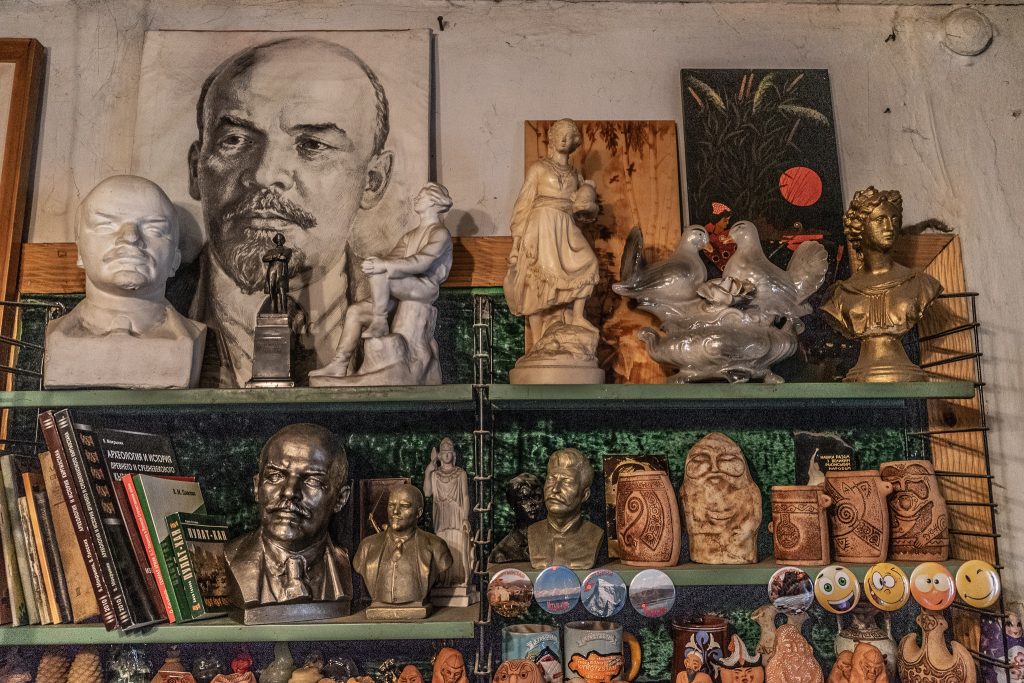 Next, Amman showed us to the Russian Orthodox Cathedral, a place which has seen a revival since the fall of the Soviet Union. Amman explains that many ethnic Russians left Karakol in the last few decades, but despite the exodus, the local cathedral was renovated after decades of neglect to become a focus of the now much smaller Russian community in the city.

The communists were never a fan of religion, and Amman explains that “During the Soviet-era the cathedral was first closed, then it was turned into a coal storage house and then even a dancing hall”.

After its various job roles, the building again became a cathedral, and today its roof is painted in a bright green lick of paint that stands out from the surrounding, drab grey apartments.

From the cathedral, Amman walked us through the nearby Russian quarter and past equally colourful blue and white wooden houses that he described as “Russian Gingerbread Houses”.

He led us though, not to another Russian structure, but to an unusual Chinese inspired mosque that was perhaps even more colourful than the cathedral we had just seen. 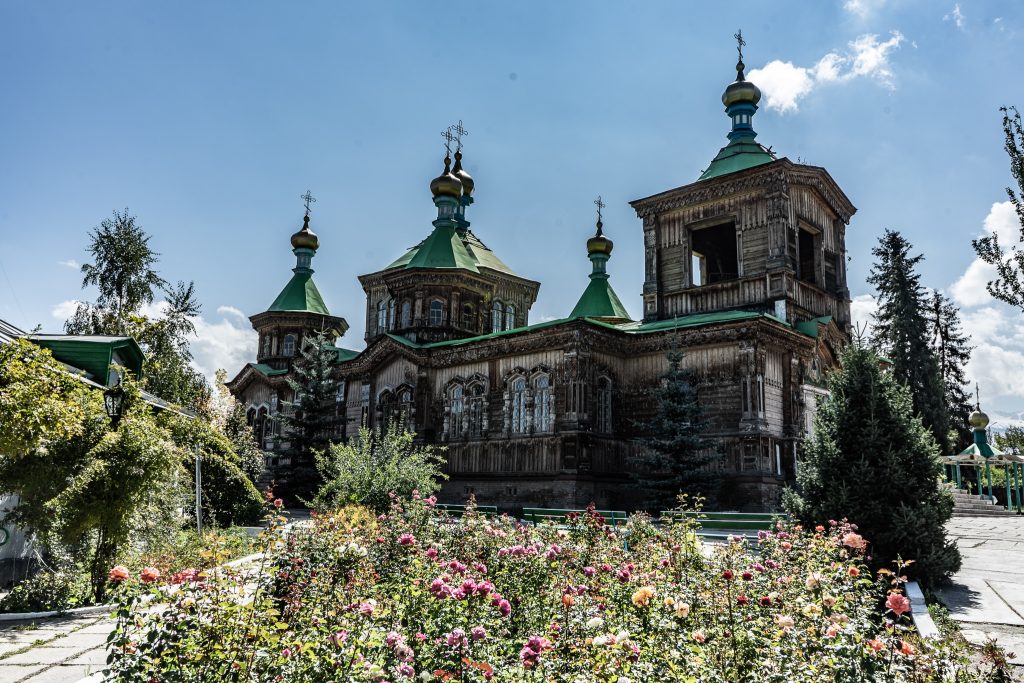 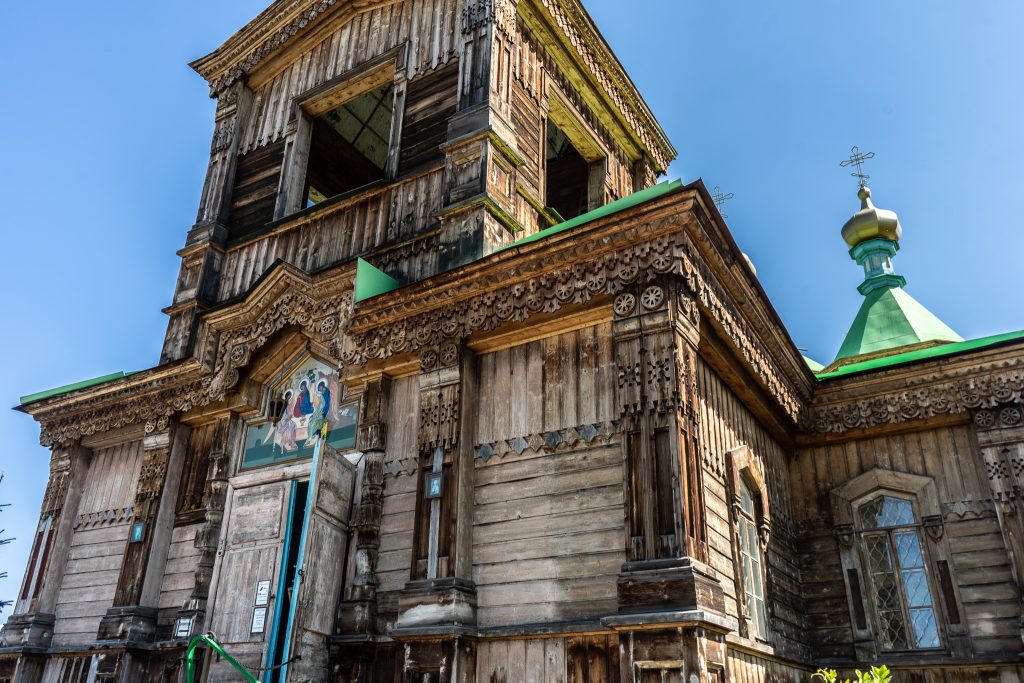 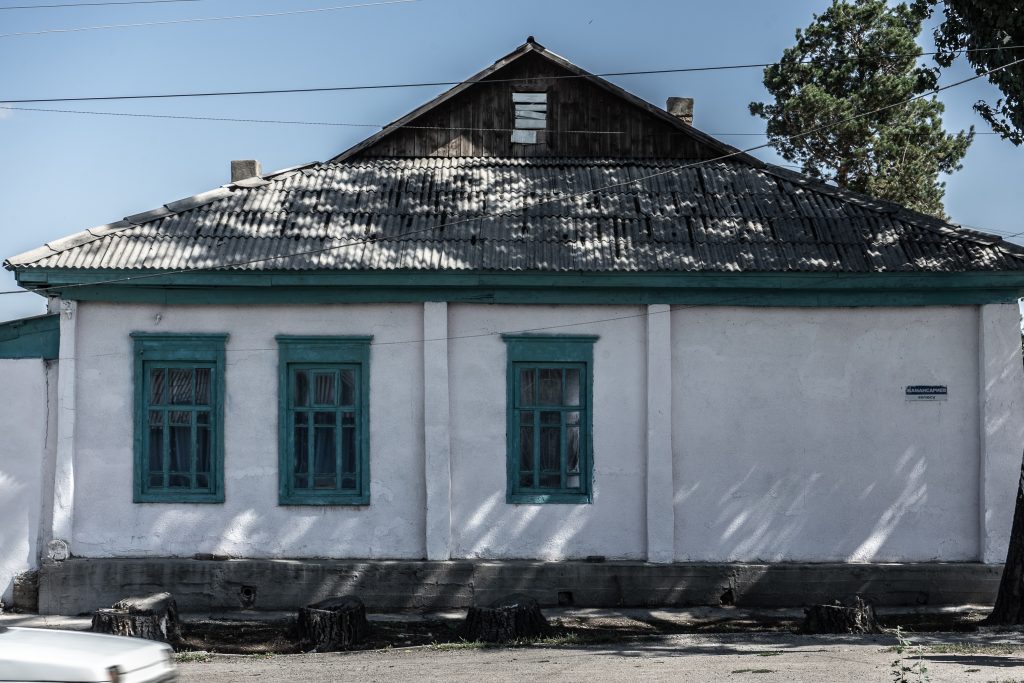 Karakol is a city that was built on immigration from not only across the Russian Empire but also from outside the borders. The Dungan Mosque is the best surviving example of Karakol’s multiculturalism, as this blue and intricately styled place of worship is the centre of the local Dungan community, a group of exiled Chinese who fled their homeland in the late 19th century.

The Dungans, Chinese Muslims descended from Arab warriors, fled over the Tien-Shan Mountains after a failed rebellion against the Qing Empire in the 1870s. Those that survived were welcomed by the Russian Czar to settle in Karakol and in other parts of Russian Central Asia, where, as farmers and traders they began to flourish.

Amman explains the history of these exiles, telling me how they arrived in Karakol at a time when the border outpost was beginning to grow, and the Dungans swelled the population of the settlement and helped to forge much of the city’s unique identity. Today, their delicious, spicy noodle dish known as Ashla-Fu has become one of the most beloved items on the menu, not only in Karakol but across Kyrgyzstan. 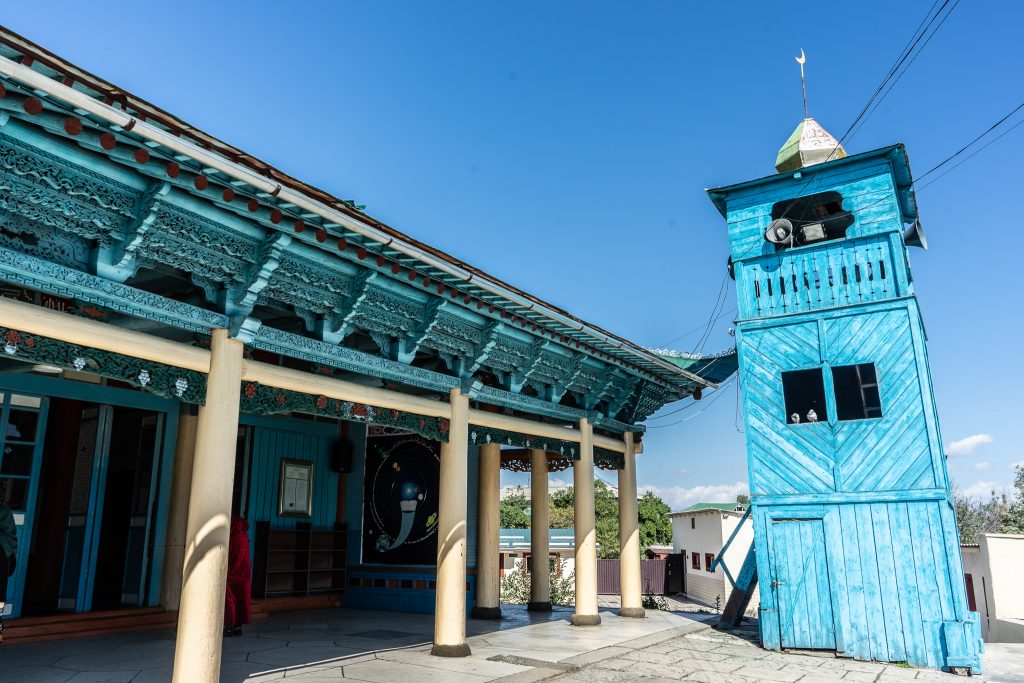 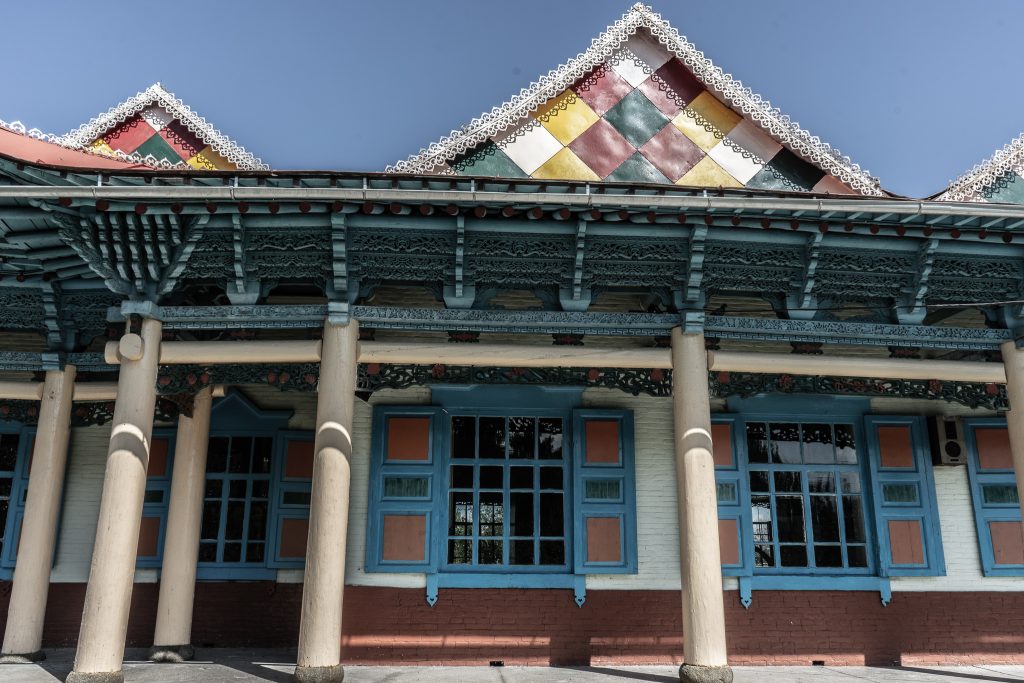 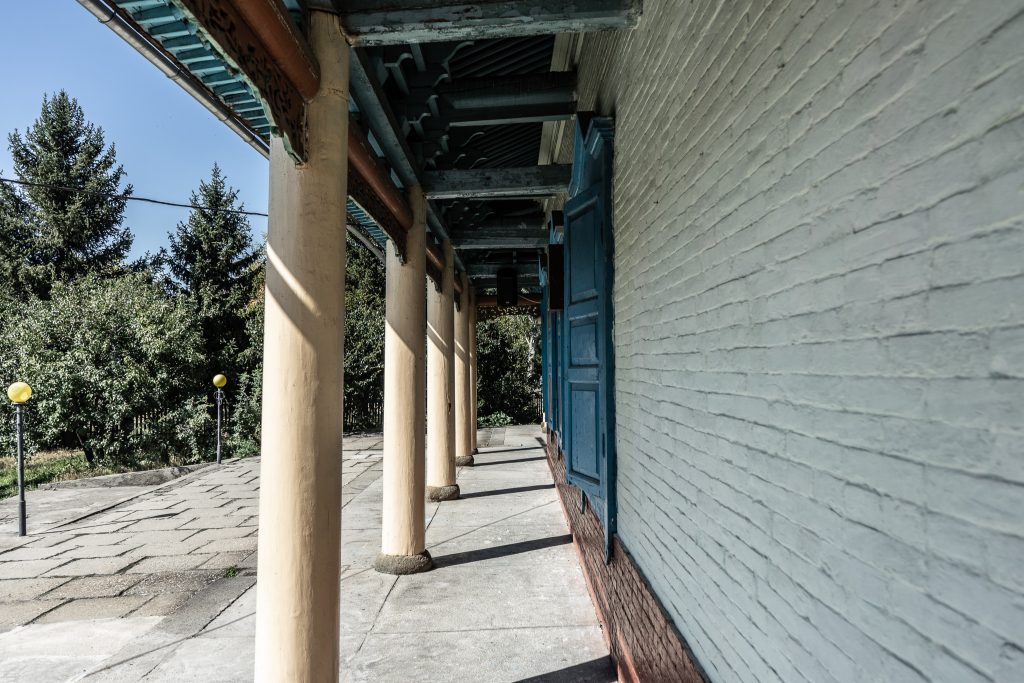 Despite the different mosques and architectural styles that Amman showed me across his city, it’s uncertain how much of the diverse culture will remain in the city. Amman tells me for instance, how the Dungan language has recently been banned from local schools, with Kyrgyz and Russian remaining the two primary languages in the city.

Although the city’s roots lay very much in different people settling here from across the Russian Empire and from beyond its borders, the Soviets were the first to attempt to do away with diversity, and although many aspects of local culture made a comeback after independence, rising Kyrgyz nationalism is also a threat to other minority traditions, languages and culture today.

Tourism though is on the up in Karakol and with a continued outside interest in the unique history of the city, then perhaps the diversity will remain, at least for a while longer.

Destination Karakol run regular Walking Tours through Karakol in the summer season. It’s best to inquire beforehand to find out the exact times and dates, however. The Walking Tour is tip based, so you only contribute to the guide however much you feel the tour was actually worth.

Full Disclosure: This article is made possible by the support of the American People through the United States Agency for International Development (USAID) Competitiveness, Trade, and Jobs Activity in Central Asia. The contents of this publication are the sole responsibility of Travel Tramp and do not necessarily reflect the views of USAID or the United States Government.

Travelling to Karakol? Sign up for Air BnB to book your accommodation using this link HERE and you’ll get £25 free credit towards your first booking!