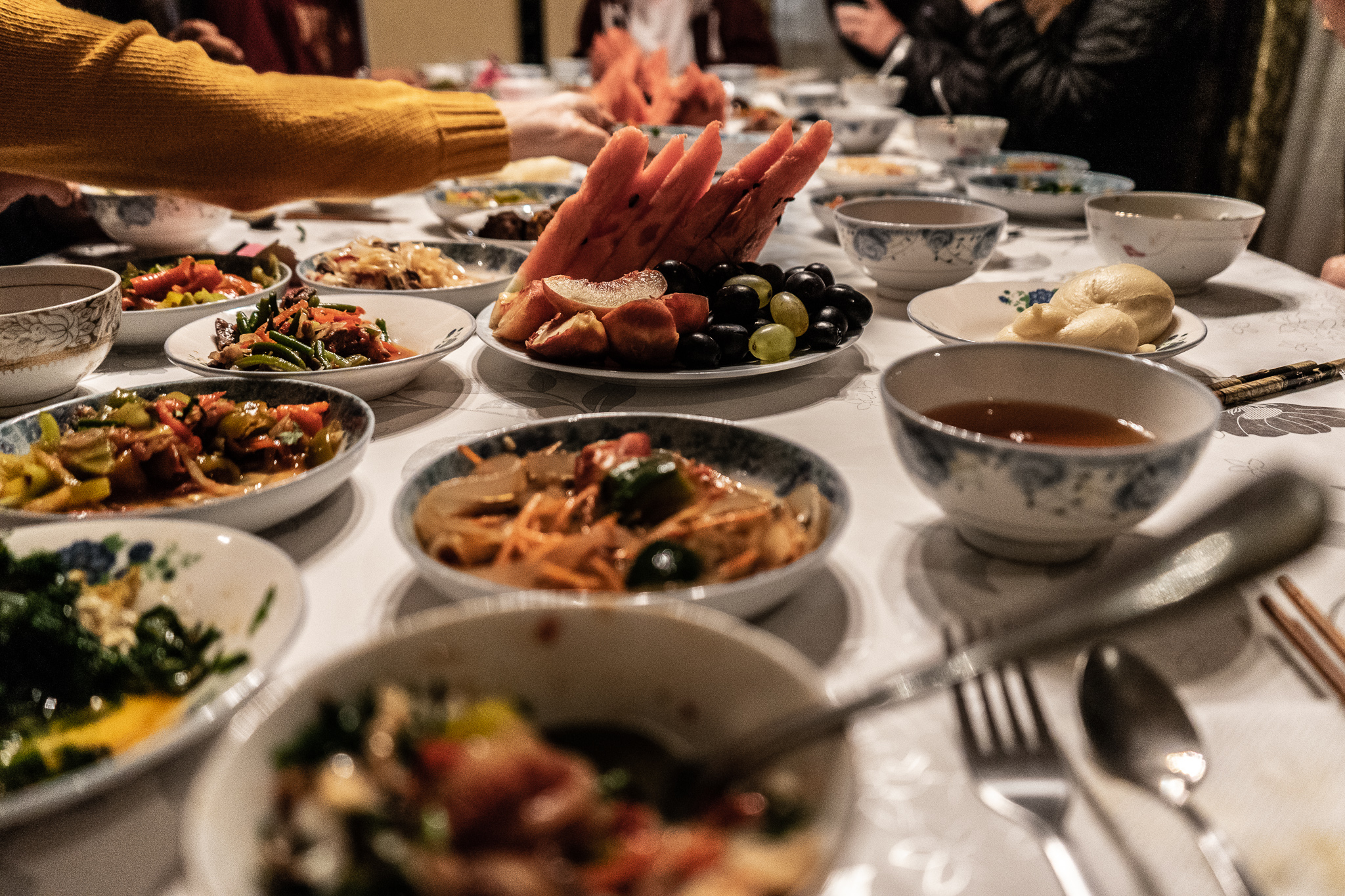 I was in the front room of a traditional Dungan house in the small village of Yrdyk, just outside of the city of Karakol in Kyrgyzstan.

Hamida, a woman of Dungan descent, was showing me how to pull noodles from a huge ball of translucent starch on the table. Stacked across the table were bowls of chilli, large style egg noodles and plates of vegetables, egg and meat.

was demonstrating the art of Ashlan Fu preparation, a dish that was brought to Kyrgyzstan when the Dungan people fled over the Tien-Shan mountains from China in the 1870s. As well as being delicious, this dish that tells a haunting story of exile and emigration.

Ashlan Fuu: A Remedy For Illness, A Cure For Hangovers and Much More

The unique Ashlan Fuu dish is composed primarily of vegetables and noodles. It’s a sort of noodle soup, that’s served cold and best enjoyed with copious quantities of chilli. Enough to see away a blistering hangover after a night of drinking Russian vodka.

Ashlan Fuu’s healing quantities are well regarded in Karakol, and it’s eaten as a cure for illness or to ward off a hangover. Perhaps that’s why the dish has became so popular amongst the many different nationalities and people of Kyrgyzstan ever since the Dungans introduced it when they fled China in the late 19th century.

In Karakol, an entire street is dedicated to Ashlan Fuu, where it retails for the low, low price of just half a dollar. People eat it all through the day. It’s cheap, it’s delicious and if it keeps away a cold and saves you after drinking too much then even better.

In Mamieva’s home in the village, I was now preparing my own starch noodles to add to the bowl of Ashlan Fuu I was creating. I mixed the two types of noodle together, layered on the cold vinegar that’s used as the base for the soup and added in as much vegetable, egg and meat as seemed appropriate. Then I added the chili, lashing it on until Mamieva seemed suitably impressed with my spicy efforts.

Then, with the cold soup in hand, I made my way through to the family dining room where across the wide table a feast had been prepared.

The Dungan people have an intriguing story to tell. The term Dungan means ‘People from the East’, I’m told by Mr Lee, a local historian who runs a small museum in Yrdyk. He goes on to explain the tale of his ancestors, from their adoption of Islam from Arab traders in the 7th century AD, right up until their exile across the mountains to Central Asia 1200 years later in the 19th century.

The Dungan people originated from western China, where they had coexisted for centuries, despite their differing faith to the Han majority. Mr Lee explained that the Dungans rose in revolt during the rule of the Qing dynasty, a reaction to ever widening repression.

The revolt was a failure. Thousands were killed and thousands more Dungans were forced to make the long and arduous journey to exile, crossing the harsh Tien Shan Mountains during the winter to travel to what were at the time the far eastern reaches of the Russian Empire.

At that time, the east of Kyrgyzstan was mostly populated by nomadic tribes, with only a few Russian military outposts and little agriculture. Being farmers, the Russians welcomed the Dungans to settle, and many communities sprang up across Central Asia, including Yrdyk.

Along with their farming skills, they brought their culinary prowess over the mountains with them too, and their cuisine quickly became a popular part of local culture.

At Mamieva’s house, I was given the chance to enjoy their cuisine firsthand. Around the dining table dishes were laid out and ready to be eaten. This was a traditional Dungan family dinner, and that meant that not only was the quantity of food staggering, but the variety of dishes were too.

The Dungans have retained much of their Chinese heritage, and although few people still speak the language, Dungans are still predominantly Islamic and their cooking makes use of ancestral techniques and receipes from their homeland.

I picked up my chopsticks and began to sample the dishes in front of me. Along with the Ashlan Fuu, there were dumplings, bowls of rice, sweet and sour dishes and much, much more.

Mamieva and her family were encouraging me to eat more and more as we discussed their people’s history and gorged on dish after dish of delicious Dungan food.

The Future of the Dungan People in Kyrgyzstan

The Dungan people integrated well into the Russian Empire when they first arrived, but during the Soviet era, their culture and religion – like most of the other Central Asian peoples – were suppressed in favour of socialism.

Many Dungans suffered during these long decades of communist rule, but after independence, their culture saw a resurgence again in an independent Kyrgyzstan, as traditions were revived. The popularity of their food had ensured that this element of their culture never disappeared, and it may be the key to the future of their existence as a community too.

Despite the initial revival after the fall of the Soviet Union, rising Kyrgyz nationalism has left the Dungans again at the peril of the majority. I’m told that the already dwindling Dungan language – a Chinese dialect that has already adopted a cyrillic alphabet rather than traditional characters – will no longer be taught in schools in Karakol. Only Russian and Kyrgyz will.

Dungan communities are spread across the former Soviet states in Central Asia, in Kazakhstan and Uzbekistan, as well as Kyrgyzstan. While it was once possible for these communities to freely cross the borders wherever they chose, with national borders now dividing these countries, the Dungan people have become more and more isolated from one another.

Tourism and Dungan Cuisine in Karakol

The future may not be so bleak though as to warrant another rebellion and exile for the Dungans, at least in Karakol. Here, the local Dungan community is working hard to preserve their culture where they can. In the city, you can find a grand Dungan mosque, built in a distinctly eastern style. It’s become a popular tourist attraction and is included on local walking tours through Karakol.

In Yrdyk, Mr Lee keeps his small museum, where he curates a collection of artefacts and items that tell the story of his people. Mamieva and her family, also in Yrdyk, are keeping traditional cookery techniques alive as they welcome in tourists visiting Karakol, providing an authentic family dinner while teaching visitors about their unique history and culture.

Dungan cuisine has become a staple in the city, and in many other locations across Kyrgyzstan, and even if the Dungan language might be suffering, it’s certain that the spicy delights of Ashlan Fuu are not going anywhere, anytime soon.

All Words and Photos By Richard Collett

Travelling to Karakol? Sign up for Air BnB to book your accommodation using this link HERE and you’ll get £25 free credit towards your first booking!