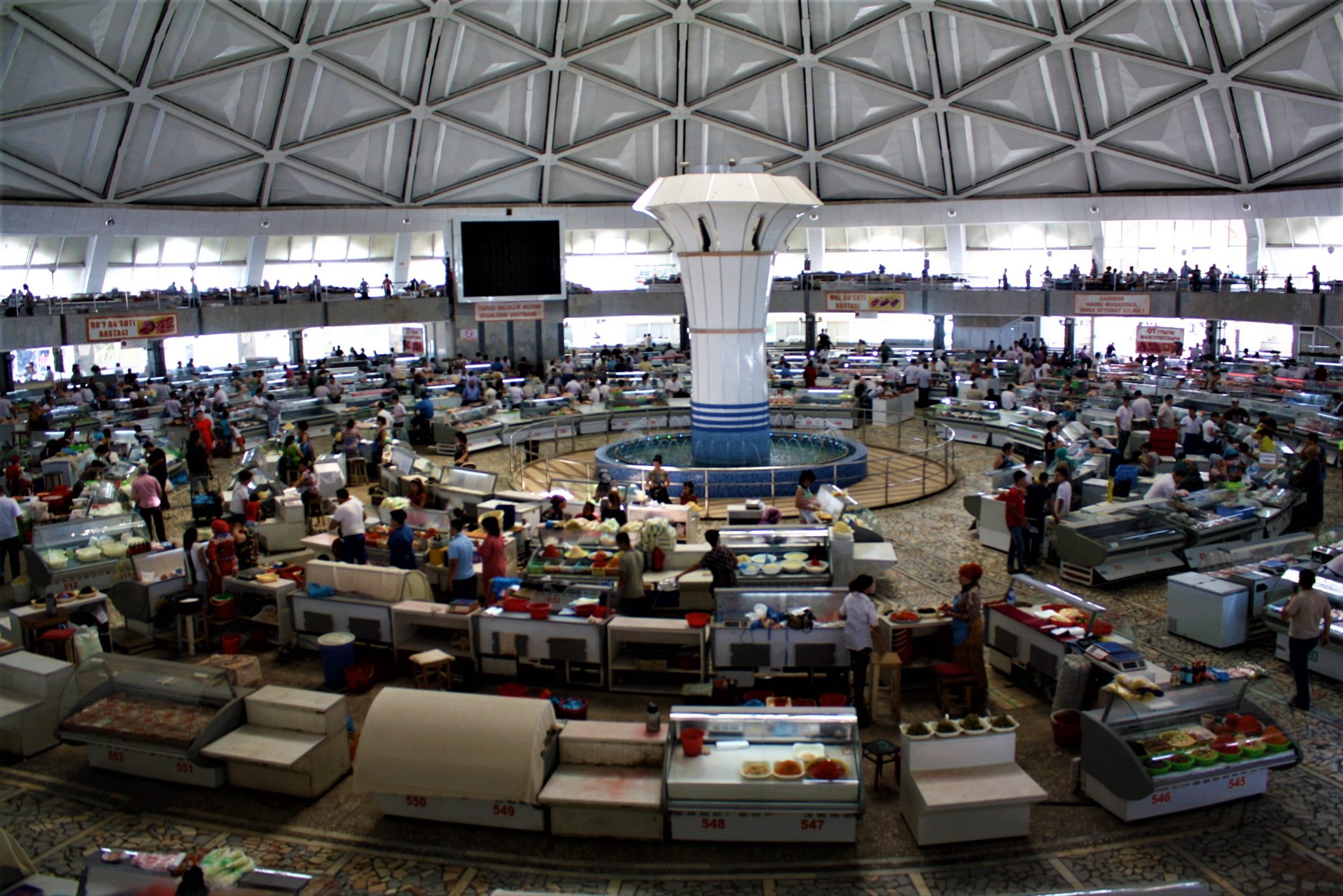 Tashkent is the heart of Uzbekistan

If you’re one of the few travellers who make it to this isolated and rarely visited Central Asian nation- if you make it past the post-Soviet bureaucracy, if you come to terms with the strange black market currency system and brave the blistering fluctuations of the desert like climate- then you’ll surely pass through the country’s sprawling, urban centre. On the outside, it’s a drab, grey concrete jungle. A city built by the Soviets from the debris of earthquakes, with little history surviving and few sights for the traveller to enjoy. Most will be compelled to jump on the first train down to the Silk Road cities- to the legendary Samarkand or to ancient Bukhara– but Tashkent is the centre of the nation, where old Central Asian cultures fuse with the challenges of a nation striving past decades of socialism to meet with modernity. From intricate metro stations to strange communist hotels, Tashkenters will show you the few sights there are to see, but then have you staying for days while you embrace some of the finest culinary dishes the country has to offer in an inspiring atmosphere of manic city life.

This is modern Uzbekistan, and here are the top things to do in Tashkent, Uzbekistan!

A visit to Tashkent should start at the Amir Timur Square, the centre of the city and home to an iconic statue of Amir Timur, Uzbekistan’s national hero, astride his noble steed. Amir Timur was a 14th Century empire builder, remembered by history- it depends who you ask- as either a bloodthirsty tyrant and genocidal maniac, or as a great leader, an enthusiastic patron of science and culture and a learned man. His capital was Samarkand, Uzbekistan’s most famous Silk Road City, and when the Soviet Union collapsed, this new independent nation needed a hero. That hero was to be Amir Timur. 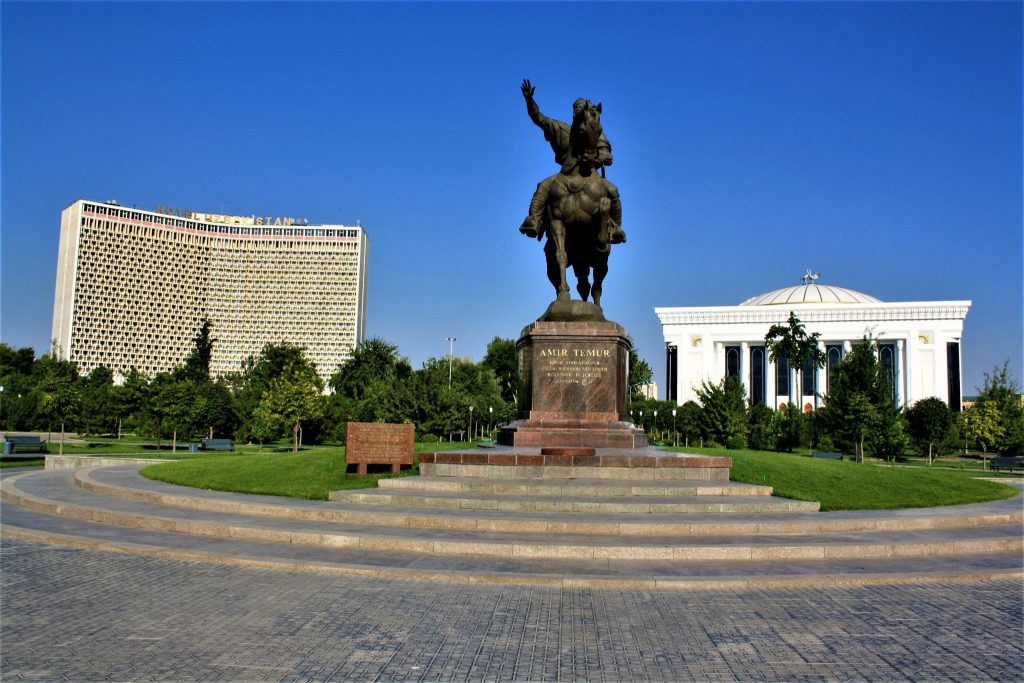 Soviet buffs will love the planned socialist feel that Tashkent exhibits wherever you walk, but none more so than at Amir Timur Square, where you can’t miss the outlandish and slightly ridiculous looking Hotel Uzbekistan. This communist behemoth may look outdated, but that’s the charm, it’s straight from the designs of Soviet architects, oddly shaped, oversized and overly symmetrical in that queerly socialist manner. You can even stay the night. 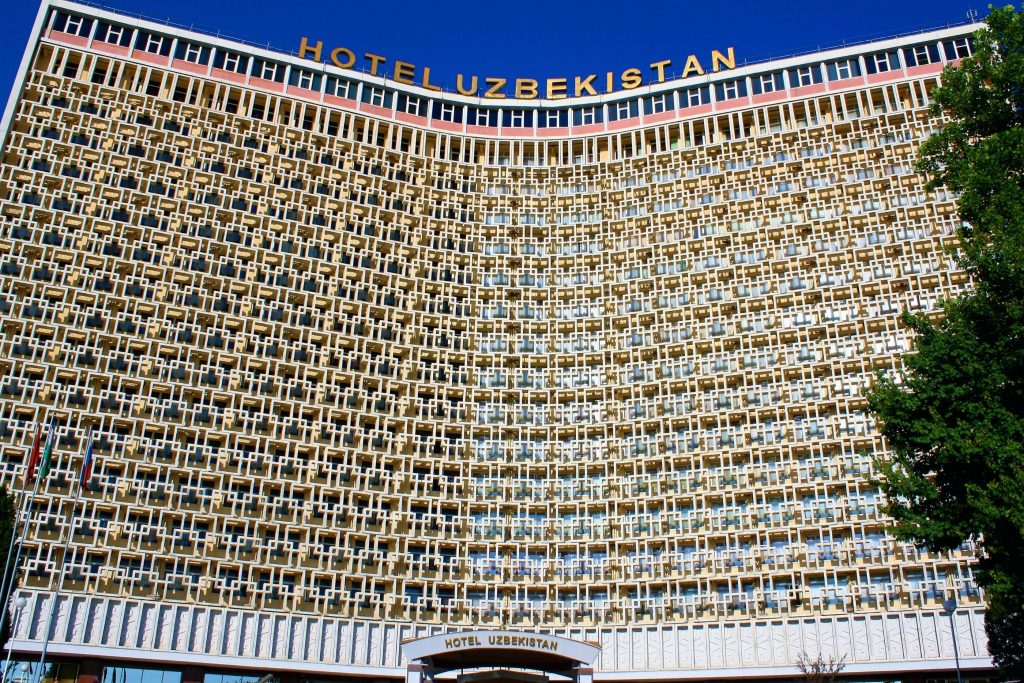 In many cities the metro is just a way a to get from A to B. In Tashkent, the deep underground system is much, much more than this! The city’s metro system was built by the Soviets, to Soviet designs and with accompanying Soviet extravagance emulating the joys and achievements of the Union… But then the Soviet Union collapsed, and while Uzbekistan became independent, the beautifully lavish and opulent metro stations remain, exulting Central Asian and Soviet history. The stations are a marvel to admire, the most extravagant being the Kosmonavtlar, a tribute to space flight. Each station is different, and you can spend hours simply riding the metro, talking to locals wanting to practice English and enjoying the metro, all for 1200 Uzbek Som a ride- about 20 Cents.

Unfortunately though you can’t take any pictures. The police presence is high, you have your bags searched and your visas checked every time you go underground, and surveillance is total. Take a picture and in seconds the guards will appear out of nowhere and force you to unceremoniously delete all of them.

Independence Square and The War Memorial

Formerly known as ‘Lenin Square’, Independence Square is now a tribute to- you guessed it- Uzbekistan’s independence from the Soviet Union in 1991. The Lenin statue was removed, and a new monument, a globe, became a modern symbol for Tashkent and the country. 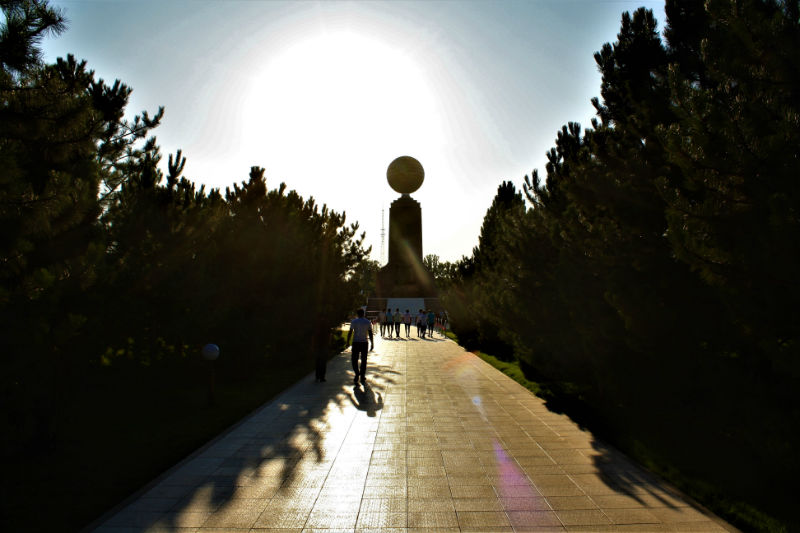 Amongst the tree lined paths and fountains of the square you’ll also find a sombre statue of a woman weeping by an eternal flame, a memorial to Uzbek soldiers lost in war. 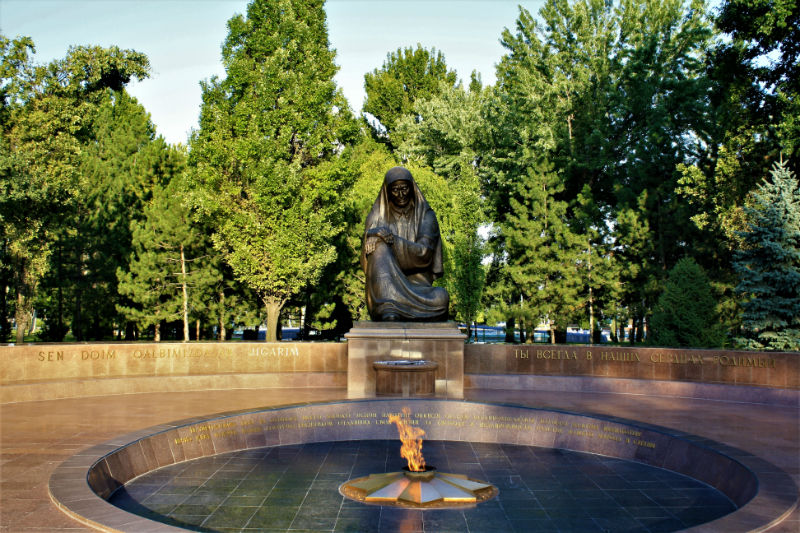 Eat At The National Plov Centre

Plov is the national dish of Uzbekistan. Each region, each city, and even each village claim to have the best Plov in the country, and each is unique. This Central Asian dish is a culinary treat. Take rice, meat, vegetables, even fruit and fry them all up beautifully. That’s the basic premise of Plov, but recipes are complicated, full of spices and different ingredients and have been handed down and refined over the centuries. The National Plov Centre, although a fair distance from the city centre, is the place to enjoy the best Plov in Tashkent. It’s only open for lunch- Plov is made in huge vats in the mornings- and when it’s gone it’s gone. For a few dollars here you’ll get a huge plate of Plov- probably with horsemeat- and you’ll be eating in a huge, nondescript canteen style restaurant with the Uzbeks, and it will be delicious.

Craving more local dishes? If the horsemeat Plov didn’t fill you up then head to the local restaurants and bars to try some Shashlik, the ubiquitous meat skewers barbecued over hot coals, and washed down with a few local beers. Somsa is another great snack, a meat or veg filled pastry served hot or cold and found on most street corners, and if you’re a lover of noodles then Lagman is a must. These noodles are served up with meat in deliciously saucy broths, and served in quantities that have to be seen to be believed. It’s a wonder that Tashkent isn’t featured more on the International culinary scene, these few local dishes are just a few of the delights you’ll unearth in the food quarters of the city. 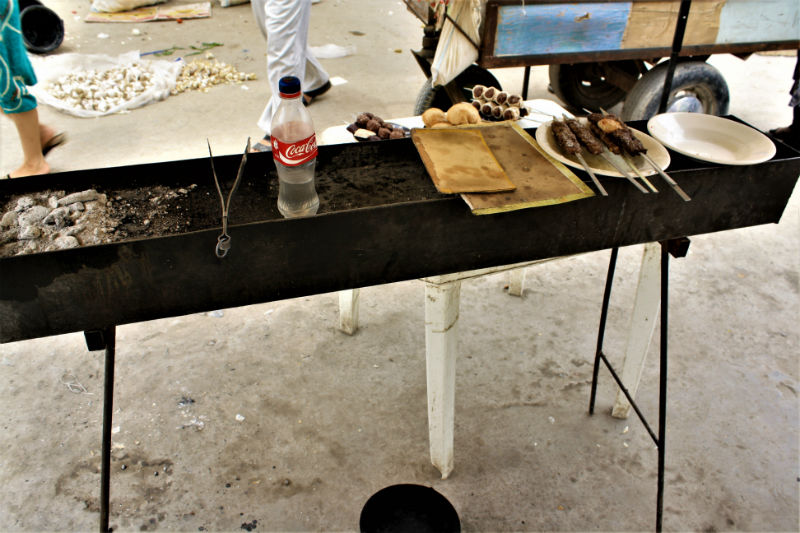 If you want to try your hand at cooking your own Uzbek food, then head to the enormous farmer’s market at Chorsu Bazaar. There are countless stalls, literally bulging out of the market buildings and onto the steps and surrounding streets. You can purchase anything here- veg, fruit, meat, spices- and the smell of roasting Shashlik and baking Somsas will follow you through the ever packed crowd of locals. 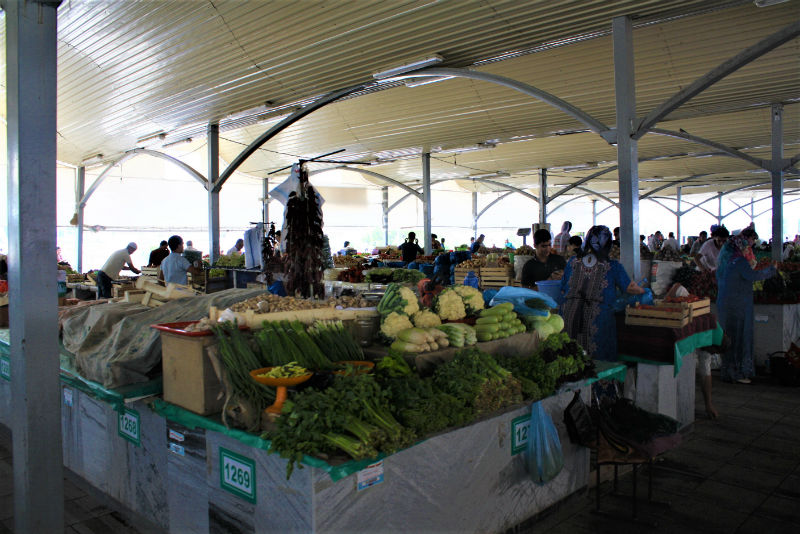 Change Money On The Not So Secret Black Market

At the Chorsu Bazaar you’ll have countless locals hurrying up to you with huge plastic bags full of money, asking you to change money. In Uzbekistan, this is the not so secret black market of currency exchange. The government sets the exchange rate for the local Uzbek Som with foreign currency at a ridiculously low rate- somewhere around 2000 Som to 1USD- whereas on the black market you can fetch at least 6000 Som if not more for 1 USD. The black market is the place to change your money here, the only problem is, you’ll end up with a whole plastic bag full of notes just for exchanging a few dollars.

And again, remember to haggle and try to find out the day’s going rate before hand.

Bargain For Soviet Relics At The Street Markets

With all your Uzbek notes in that plastic bag you’ll want to get spending some of it on a few souvenirs. Near Amir Timur Square, street vendors line the main boulevard and set up shop in the parks, selling huge paintings and old Soviet relics. 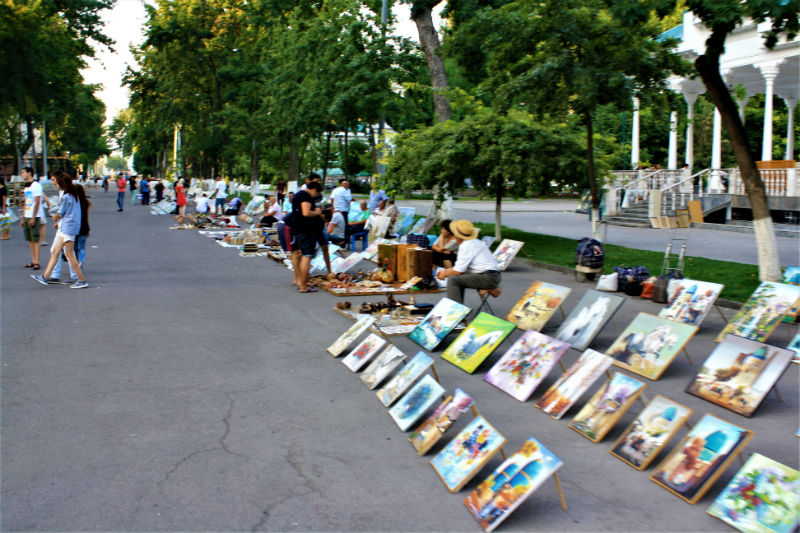 Uzbekistan might be one of the world’s few doubly landlocked countries, but Tashkenters still have a beach to spend the weekends at. In the Alisher Navoi National Park locals congregate at the lakeside restaurants, bars and cafes or stroll through the trees and grass of the parkland. 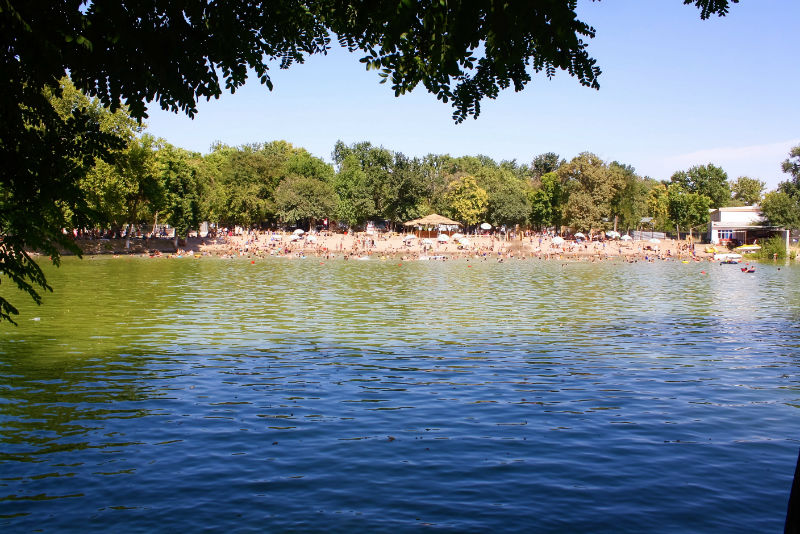 In Summer plenty of local couples have their wedding pictures here- you might even get dragged into a few- and if it’s hot- and in summer, it WILL be hot- the lakeside beach will be packed to capacity with beer drinking barbecuers cooling down in the waters.

After a packed schedule of haggling, eating and metro riding in Tashkent, it’s a good spot to wind down. 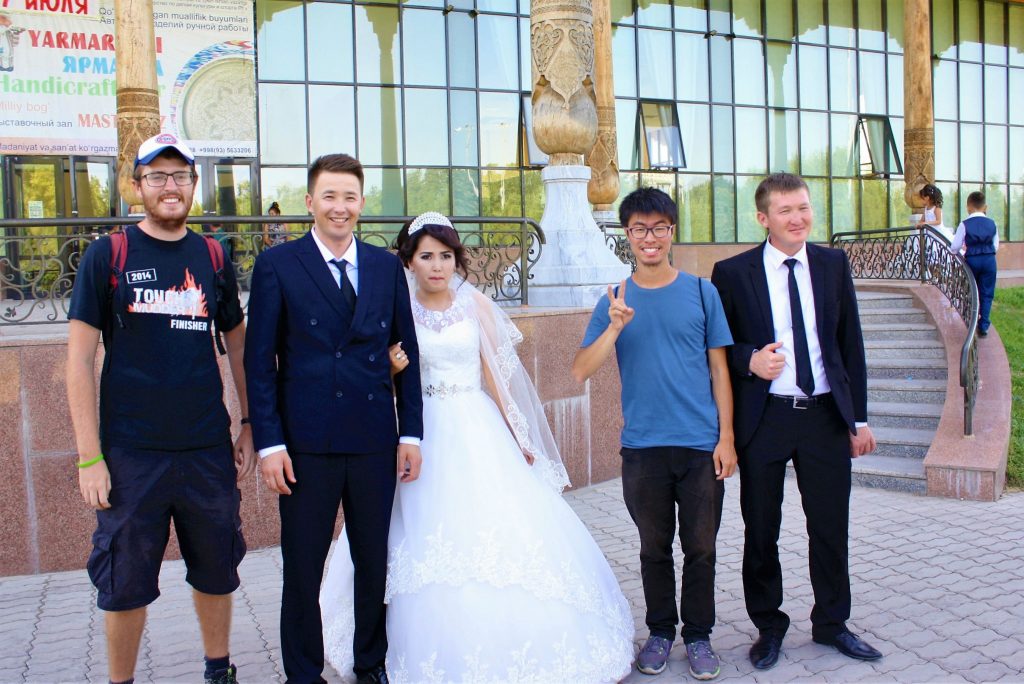