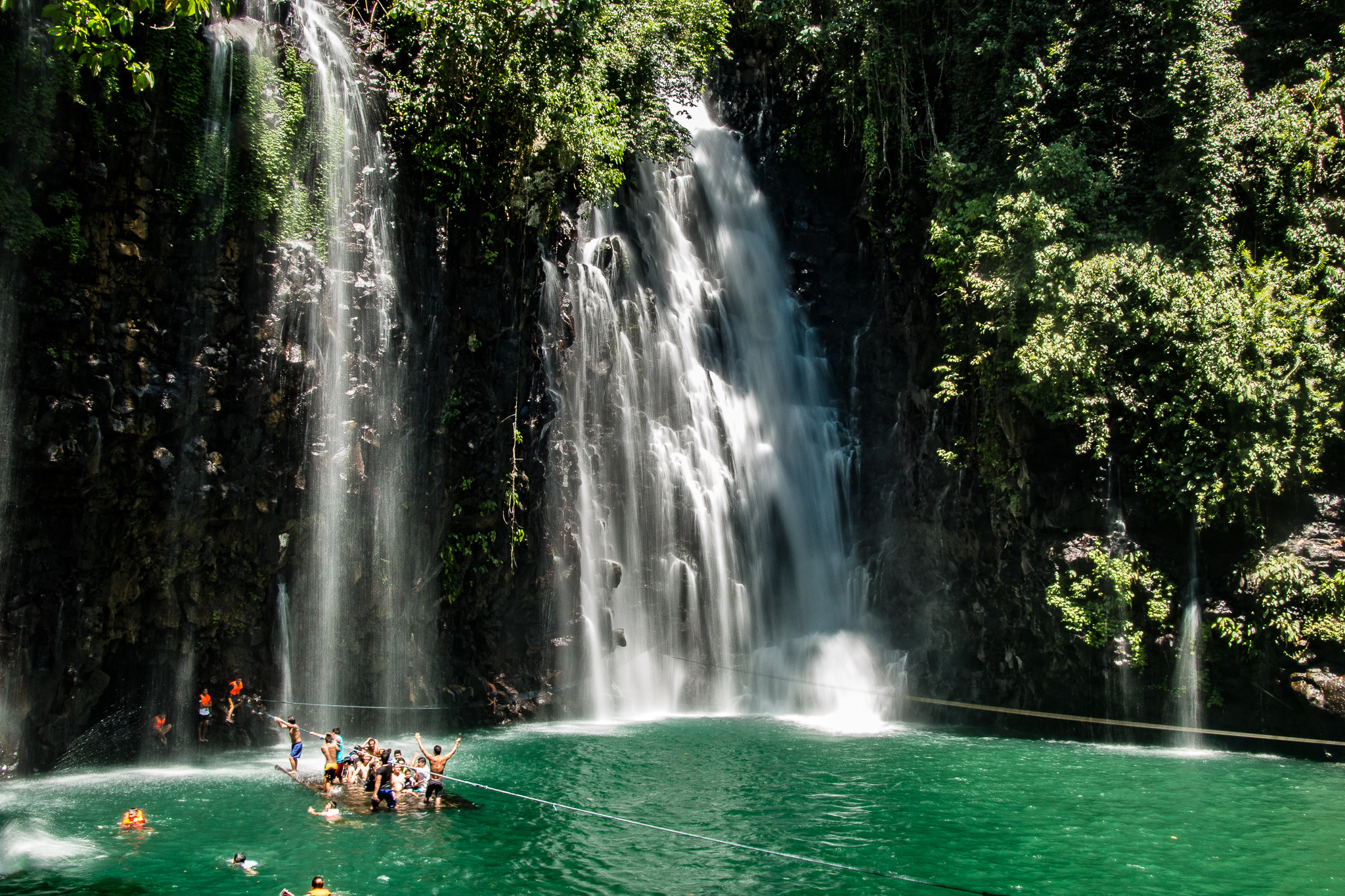 The Philippines is known for its outrageous natural beauty and is home to some of the most incredible waterfalls in the world. Few people associate the southern island of Mindanao with either natural beauty or waterfalls, but I visited Tinago Falls near Iligan City and found one of the craziest waterfalls I’ve ever seen.

I was visiting Northern Mindanao and had been staying in Cagayan de Oro, experiencing this relatively unknown part of the Philippines. Despite being the country’s second largest island, Mindanao sees little foreign tourism, being better known for kidnappings and conflicts than for its nature and waterfalls.

I knew there had to be more to Mindanao than all that though and I decided to take the plunge and to visit myself. My local friend Earl offered to show me around, but when he suggested that we visit Iligan City, just an hour or so down the road from Cagayan de Oro, even I was slightly apprehensive. This city is only 40 kilometres away from Marawi, site of the infamous and destructive Siege of Marawi that had been fought between the Philippines Armed Forces and Islamic Insurgent Groups less than a year previously.

The locals though insisted it was safe, so I jumped on the back of the bike and was soon being driven to Tinago Falls, just outside of Iligan City. 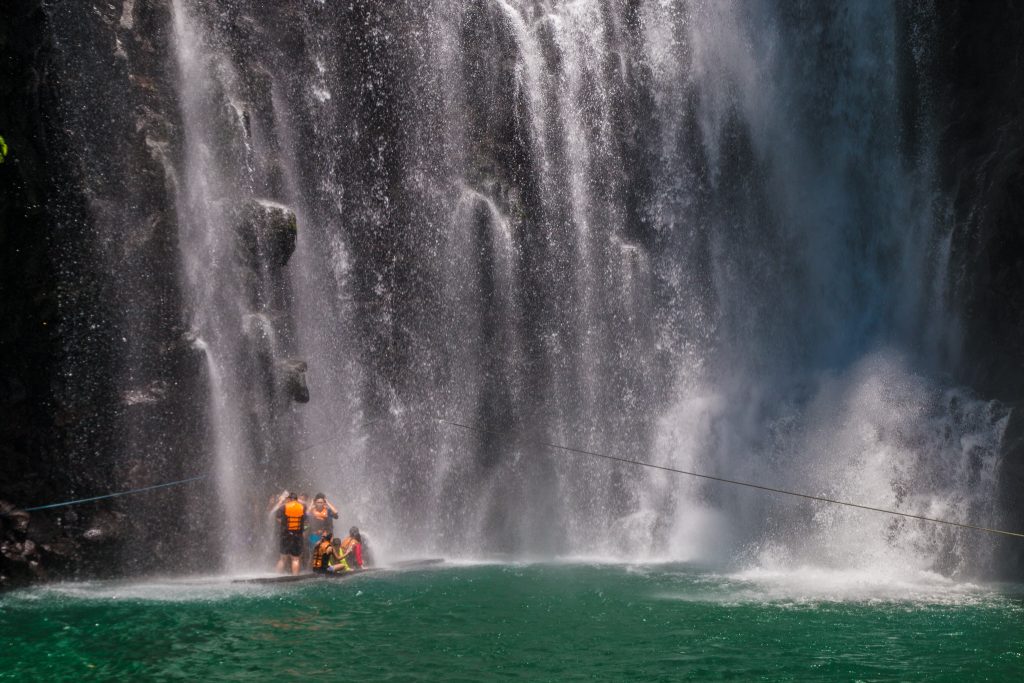 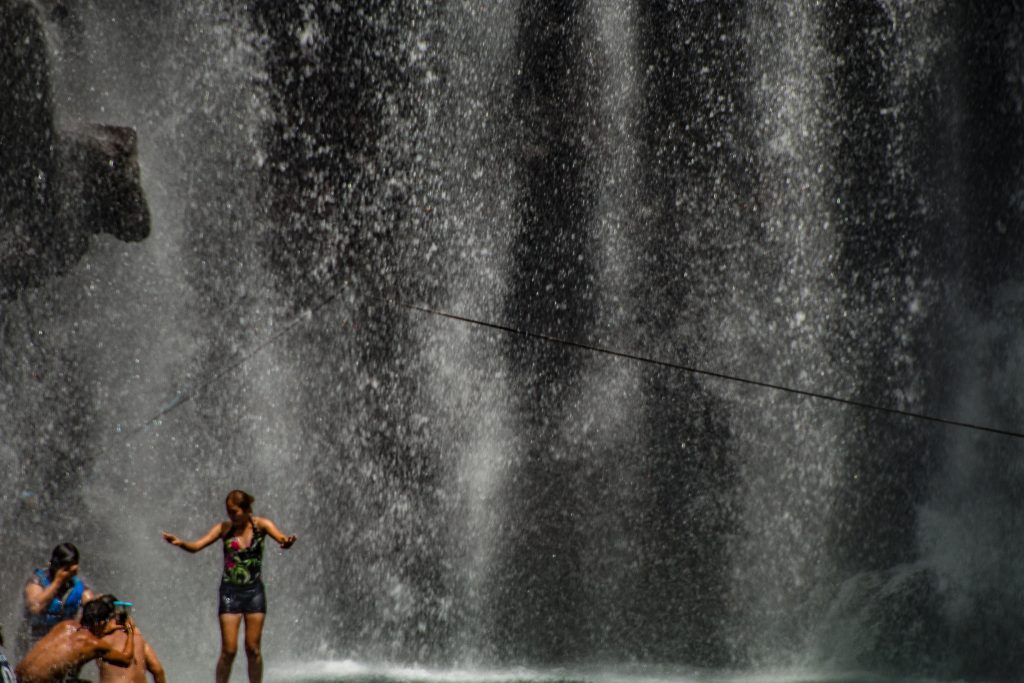 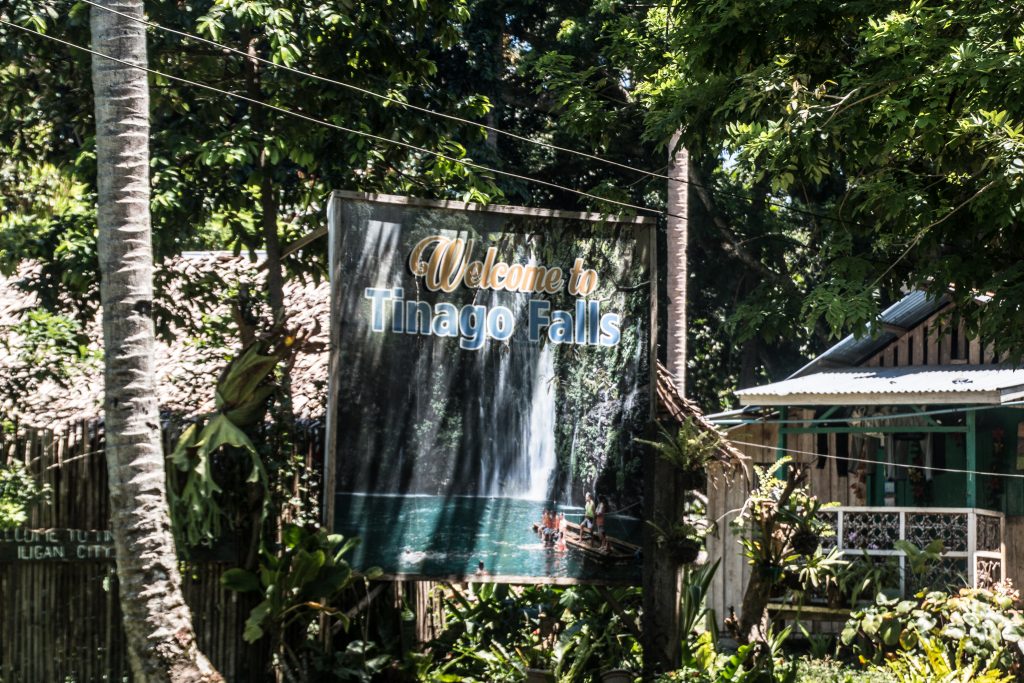 The City Of Majestic Waterfalls

Tinago Falls is located just south of Iligan City and worryingly close to Marawi, but with everything on lockdown and the security presence high things seemed safe enough. It was the weekend and the roads in and out were busy with locals and Filipinos also heading to the falls. Tinago proved to be a popular place to hang out and swim on weekends. 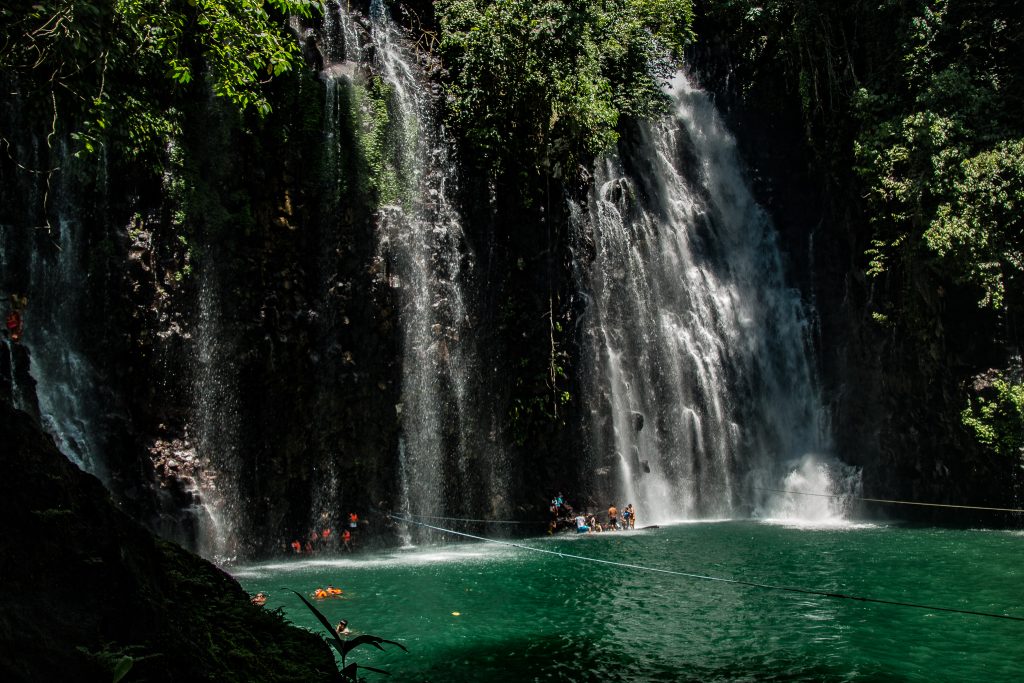 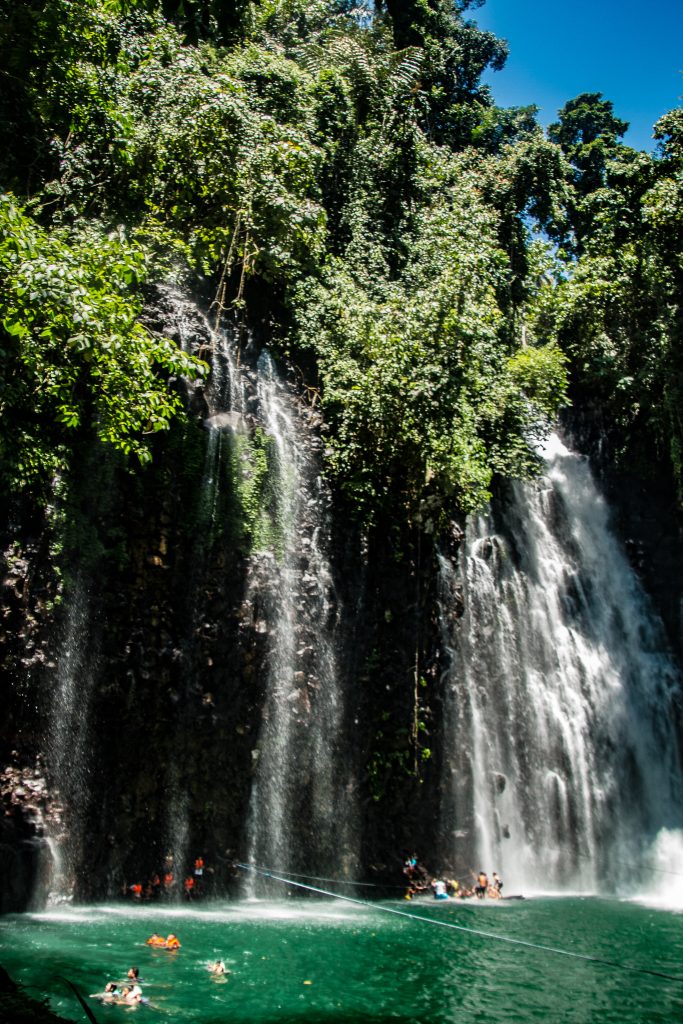 In the local language, Tinago Falls means ‘Hidden Falls’. It’s got this name because the falls are literally hidden away from sight and sound far off in the midst of a deep ravine.

The ravine is over 70 metres deep and until you are right on the edge of this huge drop it’s impossible to even hear the water crashing, let alone to see it. It’s not until you have walked the 500 steps down the cliff face into the narrow, jungle-lined canyon that you can see the falls.

And when you see the falls, you realise just powerful and spectacular they are, and wonder how they remained hidden away for so long.

Entrance to the falls is through an old, abandoned hotel. The ruins are covered in cobwebs and crumbling. Supposedly the owner of the project went bankrupt before it could ever even be finished, and the unfinished rooms and statues are a strange, lost world at the top of the ravine. 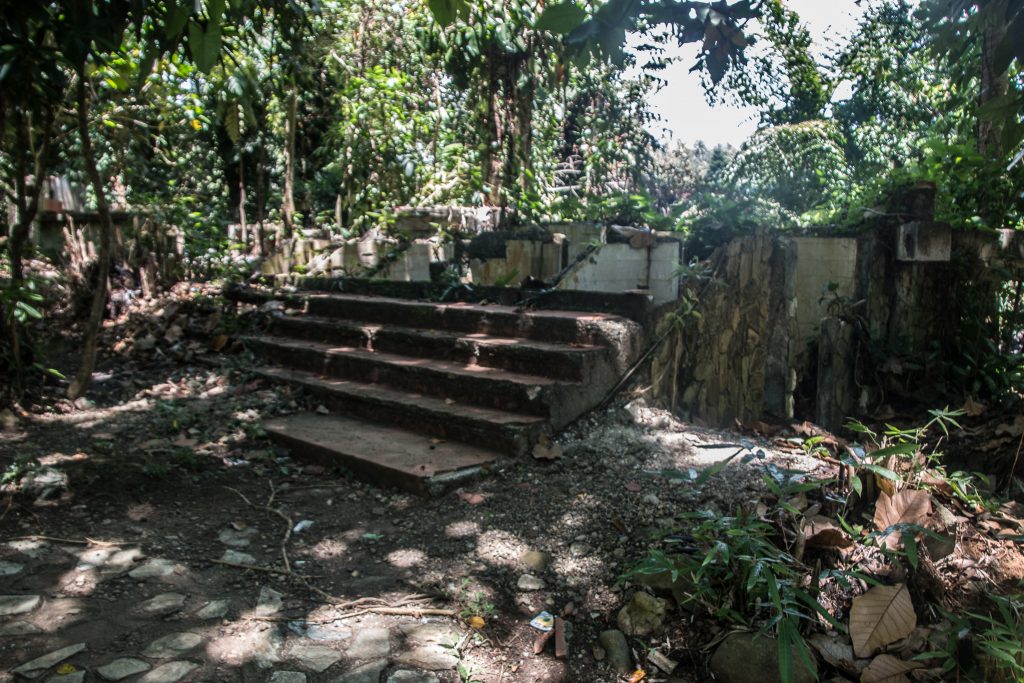 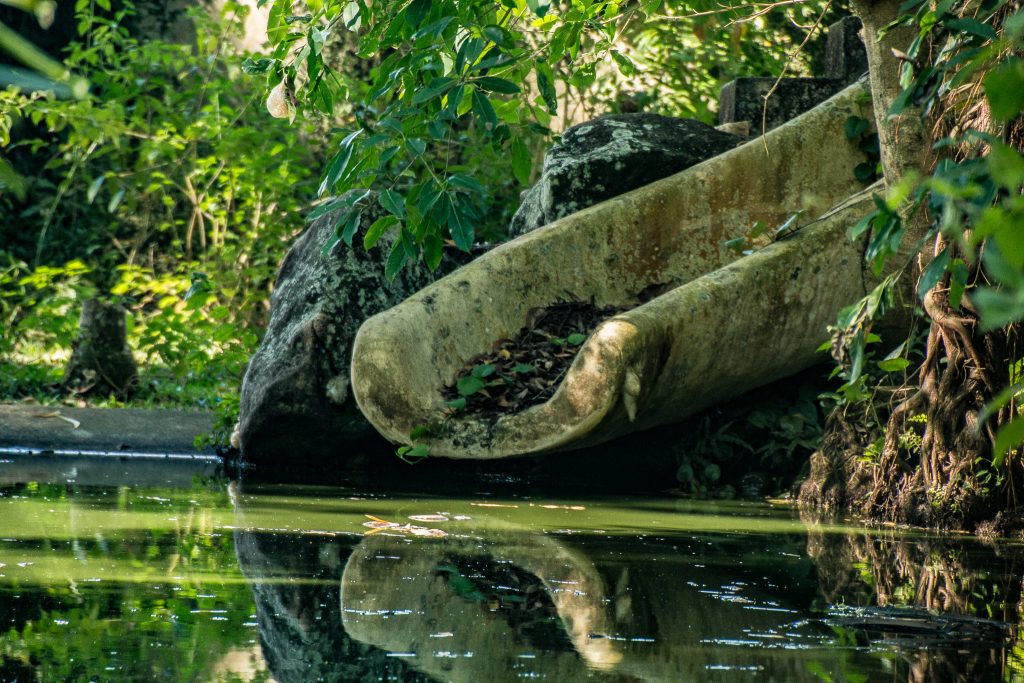 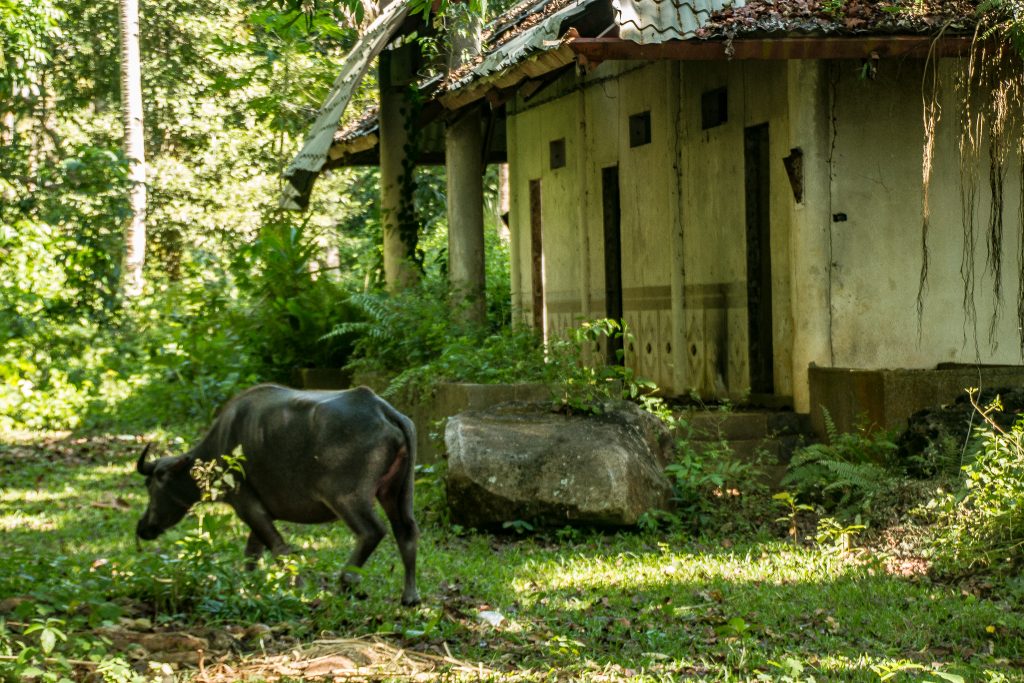 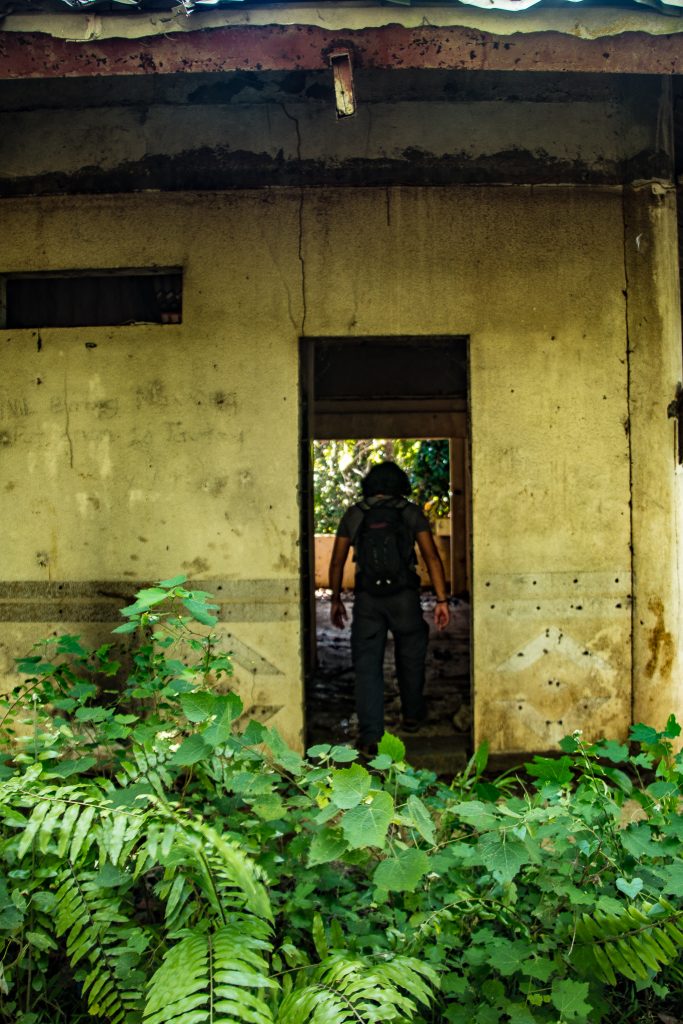 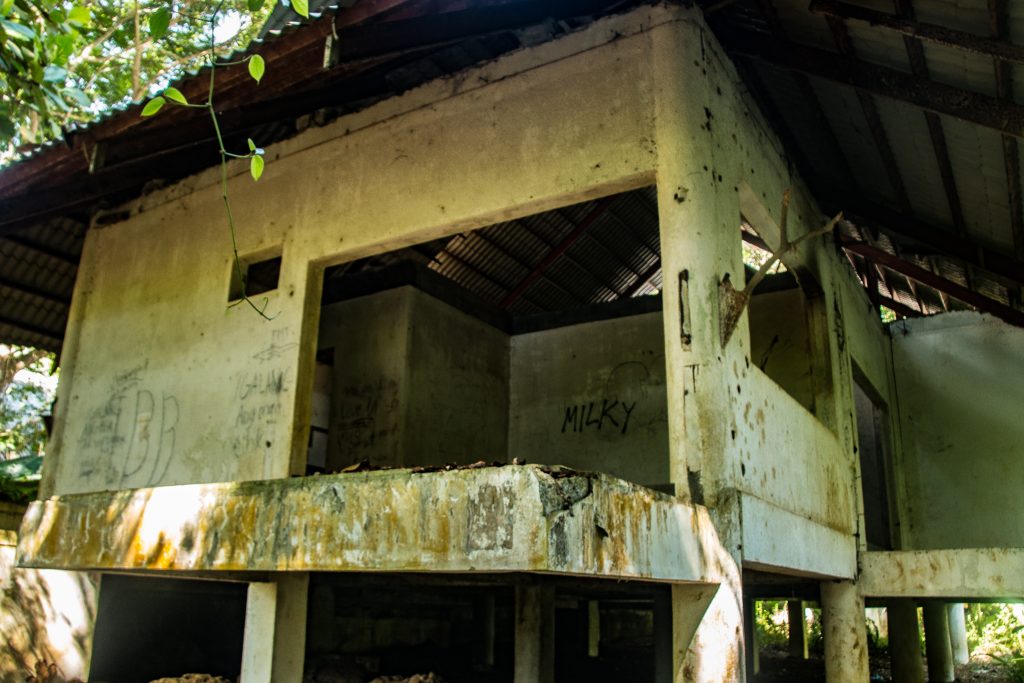 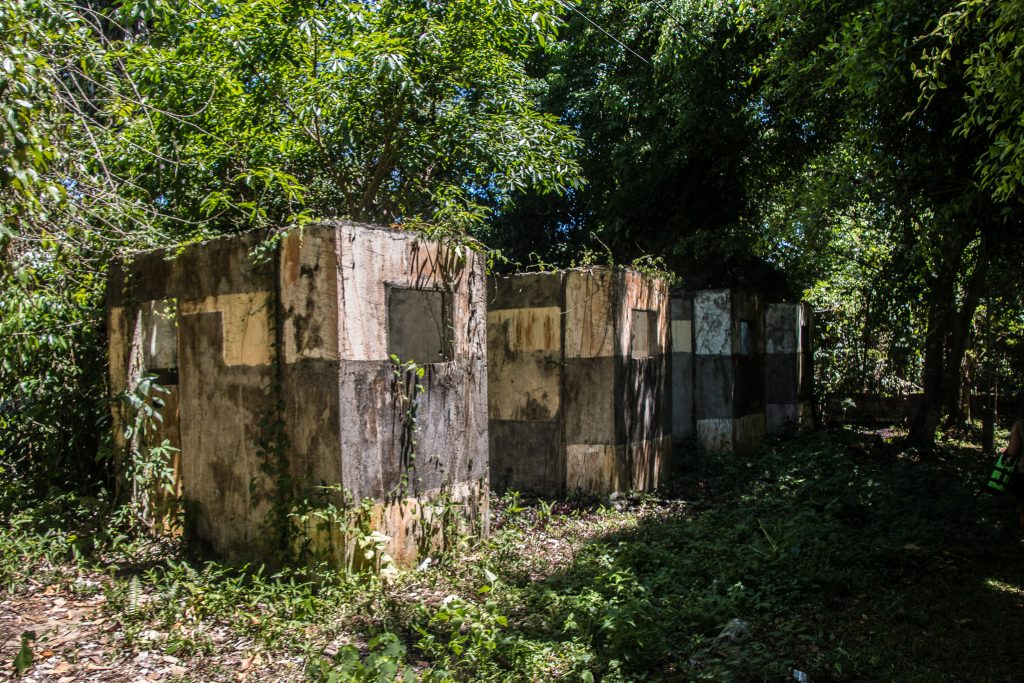 Considering the strange, quiet and overgrown ruins at the start of the trail down into the ravine, I expected the waterfall below to be empty. I’d seen almost no one else going down, and there was nothing to be heard through the jungle.

Halfway along the steep downward steps, things started to get louder though. As the jungle began to open up and the steps flattened out, the sounds of people, hundreds of people, carried through the trees.

Below in the water was a mass of orange and blue life jackets, with people jumping into the water, swimming around and relaxing on the rocks and tables surrounding the huge plunge pool.

The waterfall has multiple streams falling from a height of up to 73 metres and the locals of Iligan and Mindanao were enjoying it all this weekend, cliff jumping, drinking and riding the giant bamboo raft. 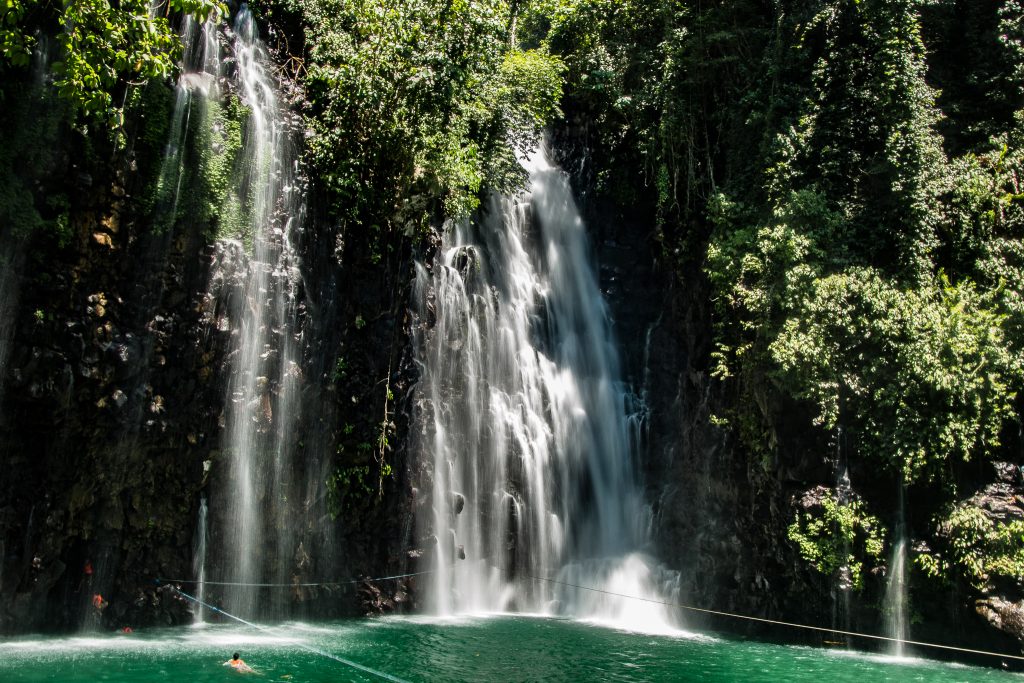 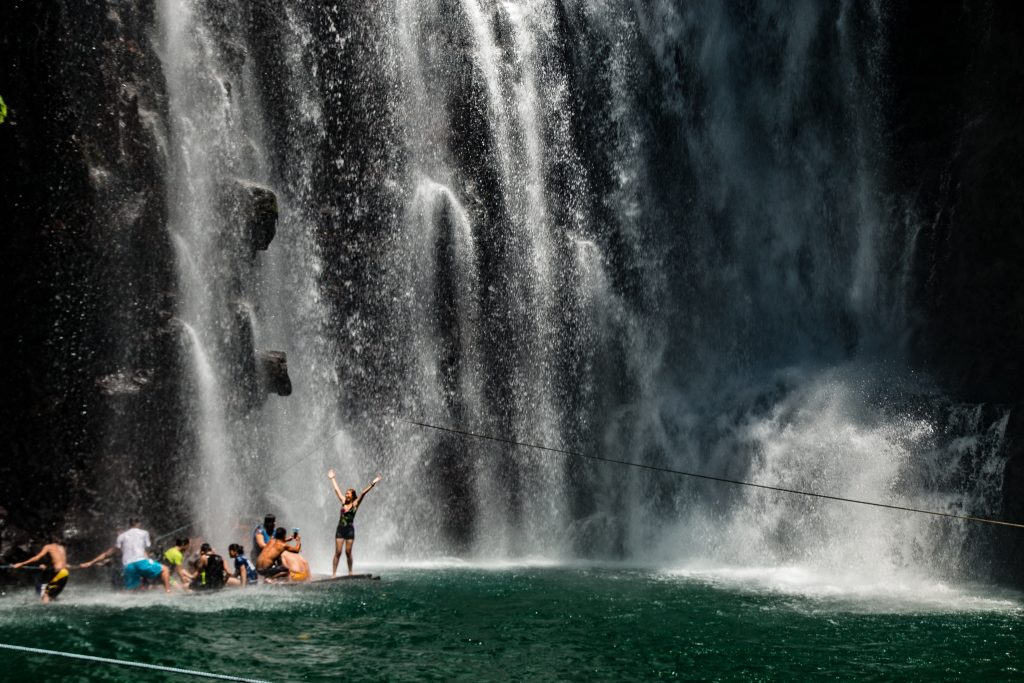 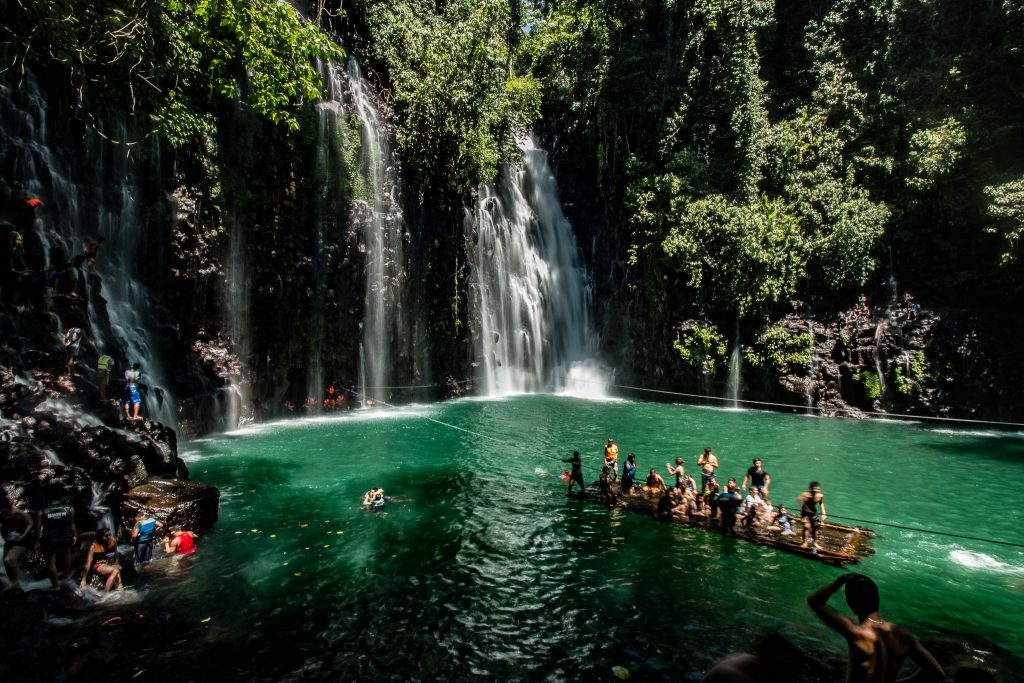 The Filipinos know how to enjoy their spectacular waterfalls. Rather than just having Tinago Falls there as a sight to watch and to look at, the locals of Iligan City have turned it into a crazy natural waterpark.

A huge bamboo raft attached to ropes and pulleys is pulled across the water and right underneath the falling water, giving those riding a soaking and a thrill to match.

Locals were climbing the high rocks too to the cheers of those below, before launching themselves into the water from dizzying heights and underneath the falls were natural caves that could be swum to.

The Tinago Falls are a natural waterpark, an unexpected beauty of a waterfall hidden in the jungles near Iligan City. It’s the craziest waterfall in Mindanao and one of the best I’ve ever visited in the Philippines! 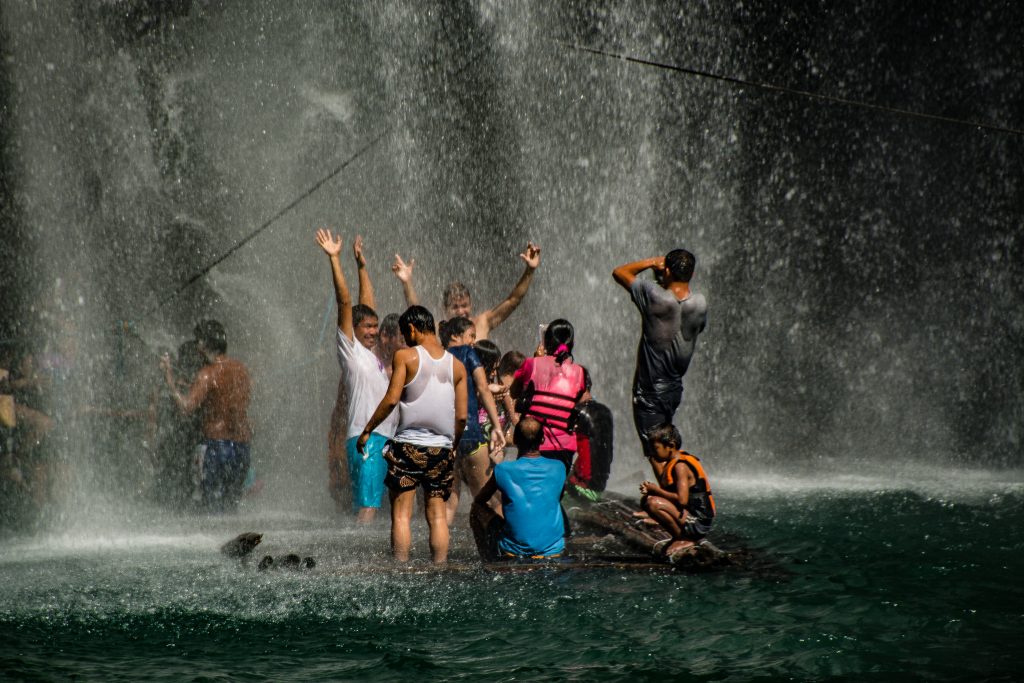 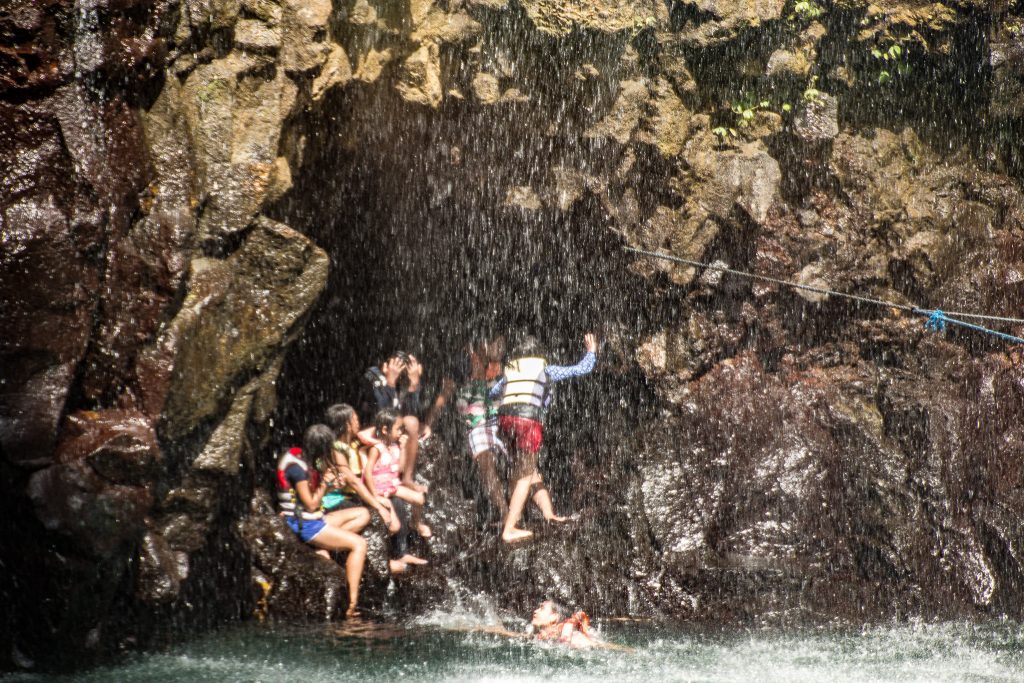 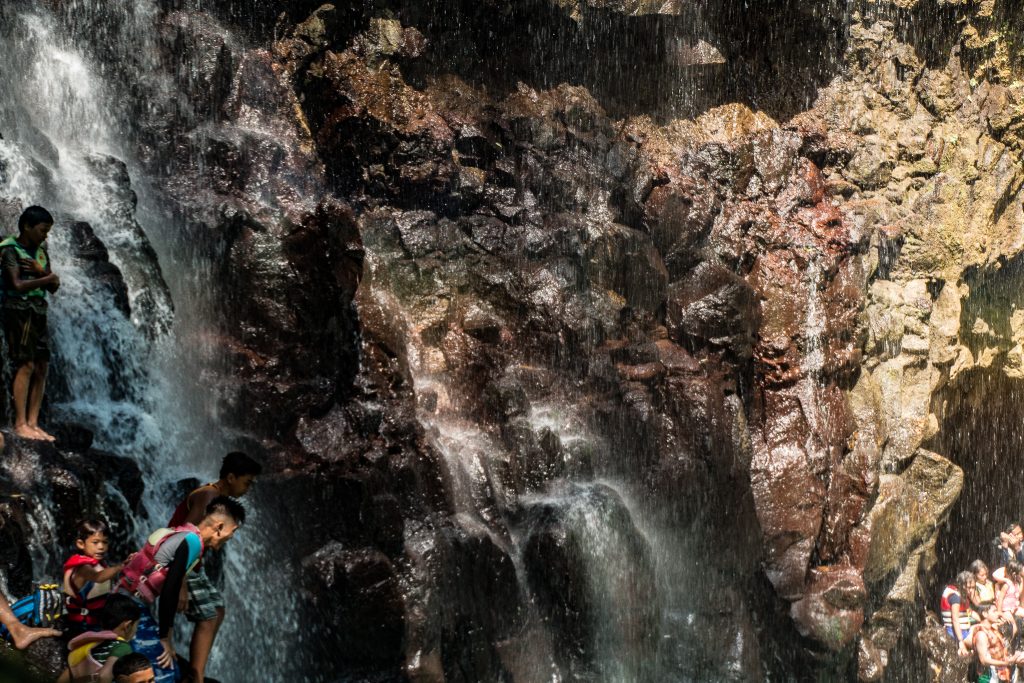 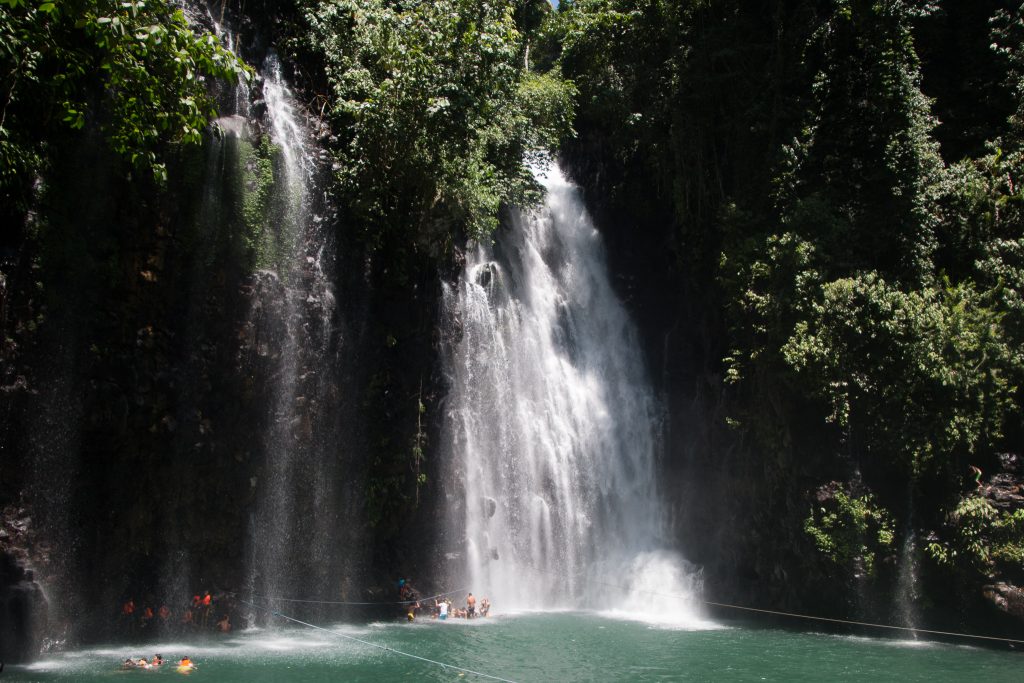 Do you fancy travelling to Iligan City to visit the Tinago Falls, but don’t know where to start? Read on for my brief travel guide to Tinago Falls and feel free to message me if you need any further information!

Where Are The Tinago Falls in Iligan City?

The Tinago Falls are found south of Iligan City in Lanao del Norte, Northern Mindanao. Iligan City is around twenty minutes drive away through the countryside, and Cagayan de Oro is 2 hours away along the coastal road.

The nearest airport is at CdO, since Iligan’s airport closed long ago. It would be possible to take a bus from Cagayan de Oro to Iligan City, then find a local Jeepney heading to Ditucalan or Robocon. It would more expensive but more convenient to hire a local Habal-habal motorcycle driven in the city for a few hours or even your own transport for the whole day.

Entrance costs 25 PHP per person and life jackets cost 50 PHP to rent if you need one (not required). Entrance is through an old abandoned hotel, but despite this rather decaying way in, the falls are always busy, especially on weekends. There are 500 plus steps to walk down in order to reach the falls themselves.

You could potentially stay the night in Iligan City, however, there is still currently Martial Law and a curfew in place, so I would recommend making the journey all the way back to Cagayan de Oro, where there is much more choice for travellers.

Travelling to Mindanao? Sign up for Air BnB to book your accommodation using this link HERE and you’ll get £25 free credit towards your first booking!

Is Mindanao Safe To Travel To?