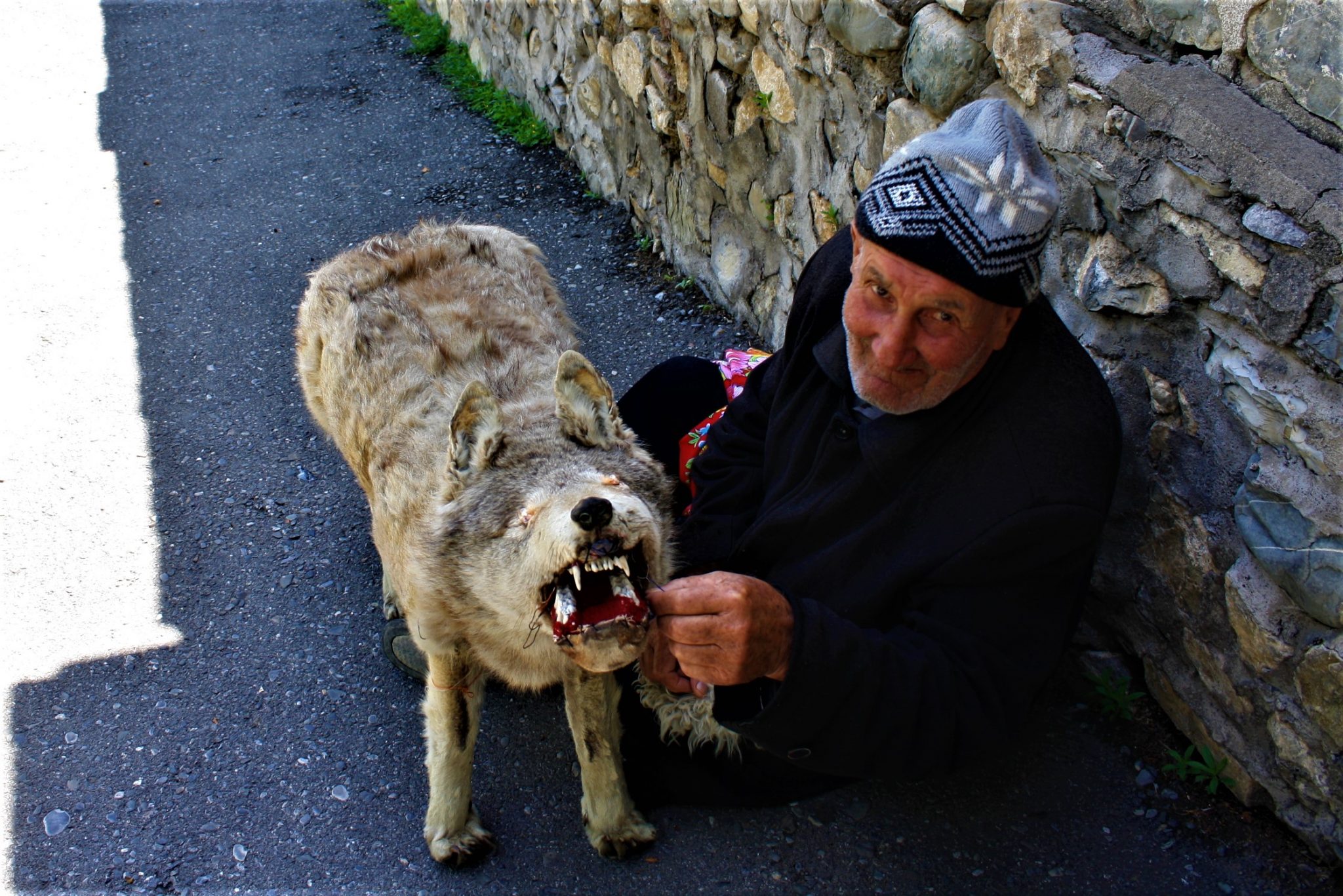 The Old Man of Sheki was staring at me with a mad look in his eyes.

He beckoned me over with a frantic gesture as he sat crossed legged on a ragged sheep skin on the floor. The greying, dishevelled Azerbaijani man had a crazy glint in eyes, and something large at his feet, hidden away beneath a colourful stitched blanket.

Who was this old Azeri who sat before me on the streets of Sheki? And what the hell was he hiding?

Under the blanket, protruded the unmistakable outline of animal paws.

Now he had my attention.

This was The Wolf Man of Sheki.

I was in Azerbaijan, the Caucasus nation renowned more for its oil fields than for its tourism. The tourists that do make it to the country tend to stick to the arid shores of the Caspian Sea or the rich, oil driven capital Baku- a glittering Dubai-like city surrounded by dusty, dry desert where the ground literally bleeds black crude and money. 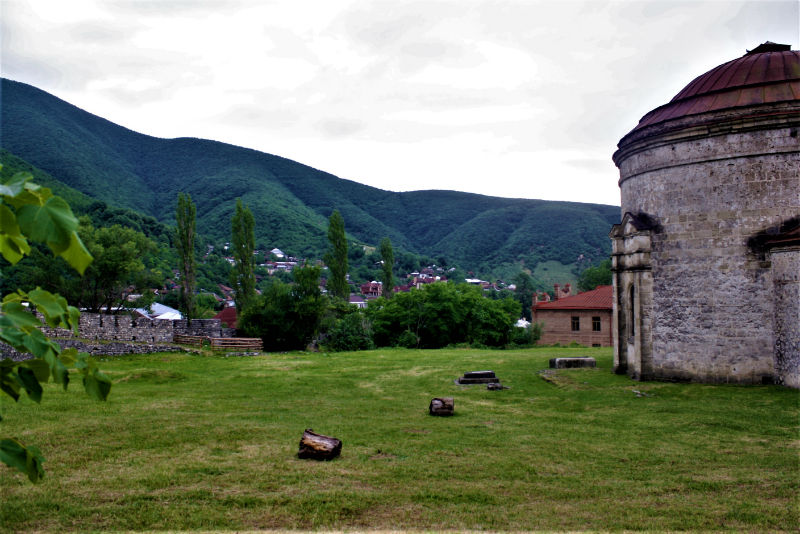 But Sheki is different.

This small Azerbaijani city is in the foothills of the north-west mountains, closer to the neighbouring country of Georgia than to Baku, and a world away from the heat and oil money of the capital.

Green mountains surround the old cobbled streets of the city, and the cool climate and fresh air attract local visitors from Baku and the odd expat oil worker looking to escape the rigs.

It’s an old city, with unique and delicious cuisine, old palaces, good hiking and of course, its home to the half crazed and increasingly notorious Wolf Man Of Sheki. 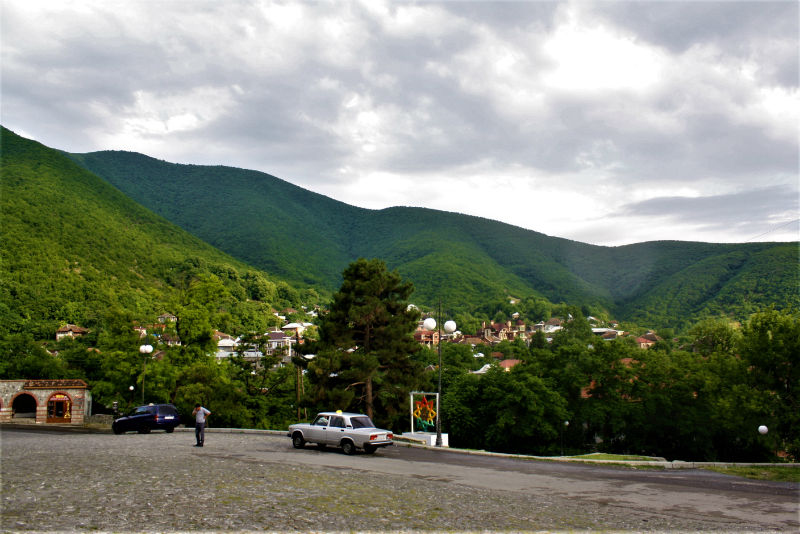 The Wolf In The Mountains.

The strange old man knew he had my attention. And probably my money too. This was too intriguing a situation to walk away from.

He slowly pulled back the blanket covering the animal at his feet.

The fur was matted and patchy, the legs uncomfortably straight, the eyes terrifyingly vacant and the bared teeth and open jaw madly horrific.

It was a wolf. 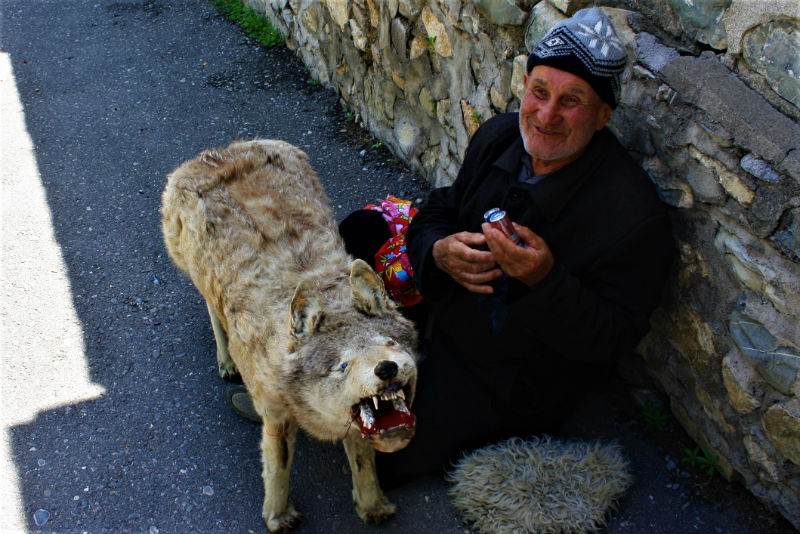 Badly taxidermied and probably as old as the man himself who was now looking at me with a mixture of pride, expectation and madness. As far as my scientific wolf knowledge goes, it looked as if maybe once it had perhaps actually been alive, roaming the hills of Sheki until its unfortunate demise.

But, why did this old man have it? Why was he showing it to me? And was I expected to pet the wolf? The unveiling began to raise more questions than answers in the green mountains of Sheki.

Sheki has long been a stop on the Silk Road which connected on to Russia from Central Asia and China. And long have the wolves roamed the mountains, stalking weary travellers. For centuries Sheki has been famous for its Caravanserais, hotels offering lodging and food for traders, travellers and merchants passing through. A refuge from the wolves and the bandits roaming the mountains. 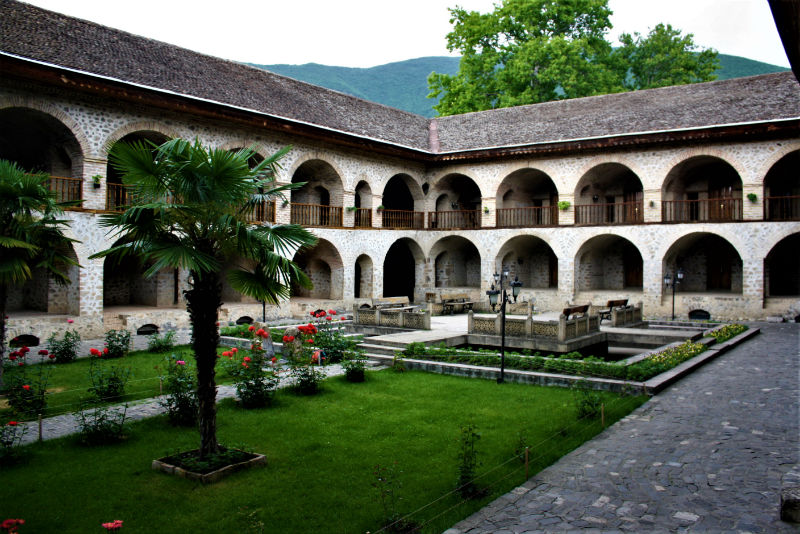 While modern times have seen the Caravanserais fall out of use, one in Sheki is still in operation, serving travellers from across the world as it has done for centuries. But instead of arriving on horseback or with a camel train laden with goods, the visitors these days arrive with rolling suitcases or beaten backpacks in the back of a taxi. 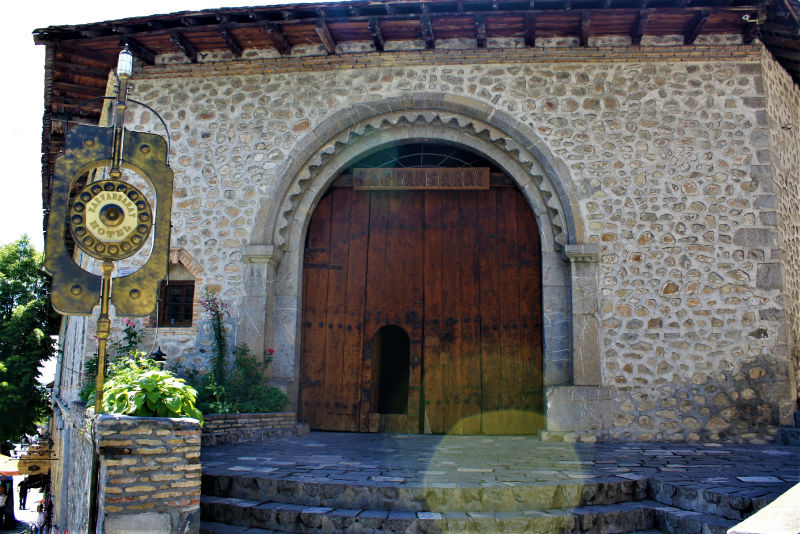 Entrance to the Caravanserai was through a small door built into a larger wooden door; large enough to swing open to allow animals and goods through and into the spacious and verdant courtyard and gardens. 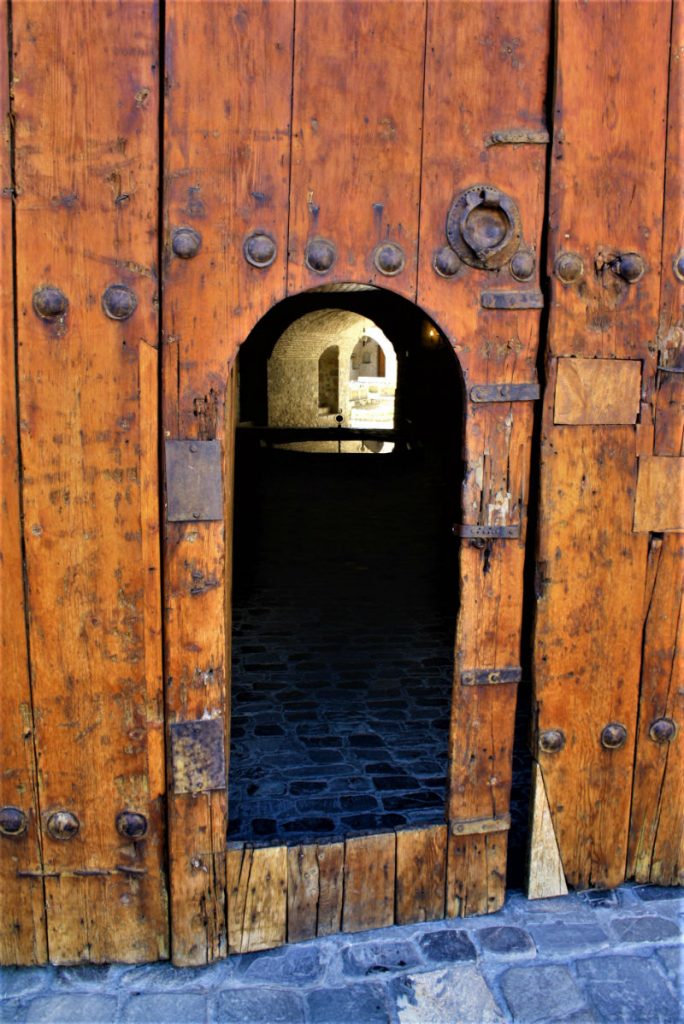 The Caravanserai was built to allow the animals to be sheltered, fed and watered on the lower floor of the courtyard, while the travellers and traders stayed on the upper balconies. Today the lower floors have all been turned into lodgings too, and this was where I was staying, in the shadow of the Silk Road travellers who’d walked these same steps centuries before me. 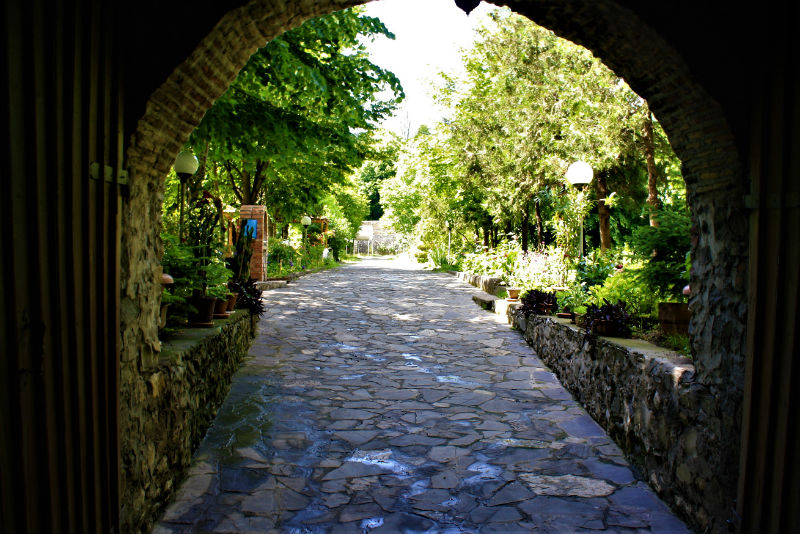 The Palace Of The Sheki Khans.

I’d found the old Wolf Man in the grounds of the Sheki Fortress, a fortress which dominates the city from its position on the top of a steep hilltop. He was siting in the shade of a stone wall awaiting an unwary traveller upon which to unveil his maniacal taxidermied wolf, while at the same time hiding from the patrolling security guards who were as equally perplexed as to his intents as I was. 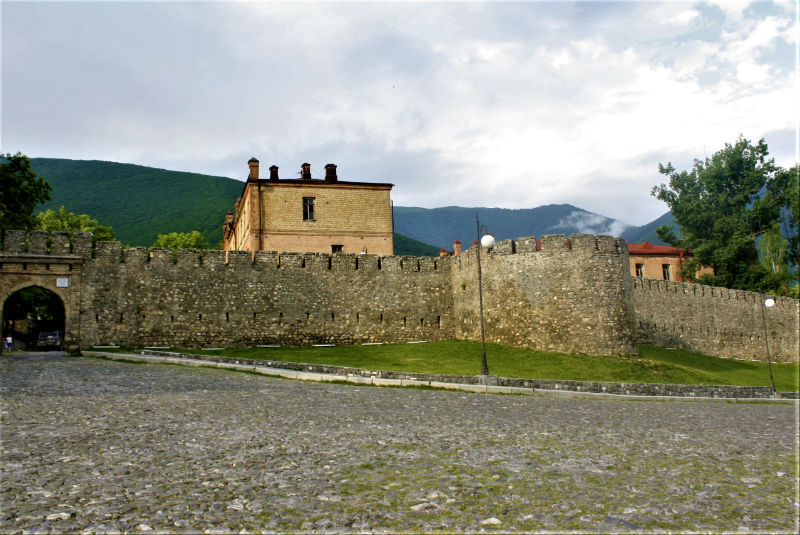 The fortress is the site of not only the fabled Wolf Man, but also the historic and rather ornate Palace of the Sheki Khans, a summer palace built in 1797 for the rulers of Sheki, who once ran an independent Khanate in the mountains- until of course, the Russians came along a few years later and ended that unruly business of independence in the Caucasus’… 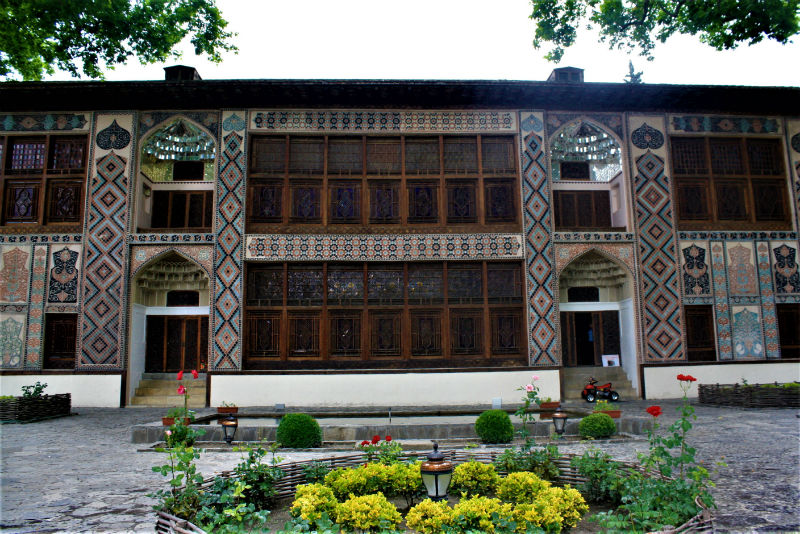 The Palace Of The Sheki Khans

The unique palace and its intricate designs and motifs, both inside and out, are as good a reason as the Wolf Man to visit Sheki. It’s been carefully preserved, and stands as a tribute to Azerbaijani heritage, history and culture on the hilltop of the city. 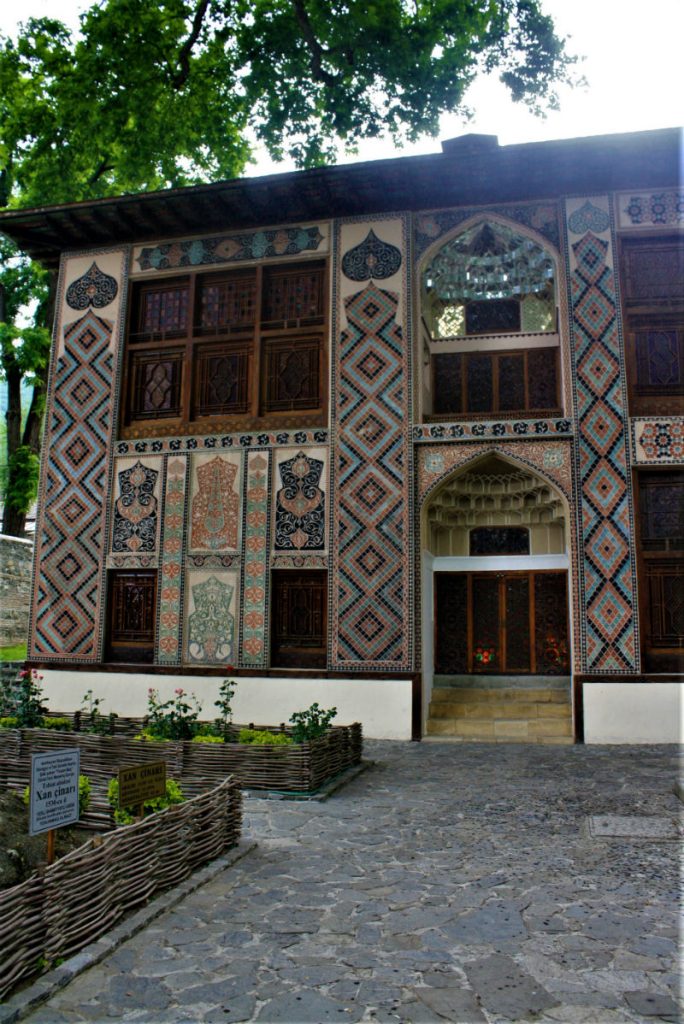 But enough talk of palaces and history I hear you cry, where is the Wolf Man of Sheki in all of this?!

The Eyes Are Alive.

After unveiling his strange creation for me to witness in wonder and confusion, the Wolf Man communicated to me that his name was ‘Cumay’, and using hand gestures indicated that he’d shot this wolf himself in the mountains.

When, or how long ago, I couldn’t understand. How old the stuffed wolf is, I will probably never know. But it was clear that Cumay was proud of his creation.

He even had one more absurd sight to unleash upon me in the shadow of the Palace of the Sheki Khans. 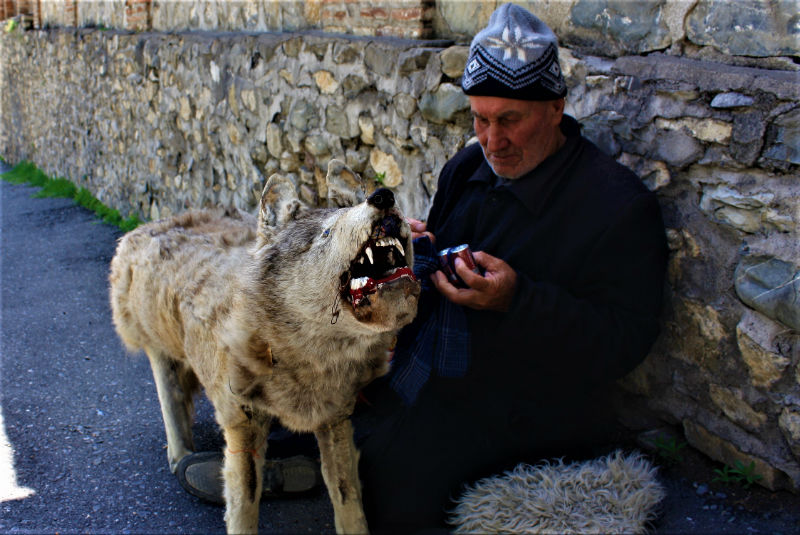 Cumay pulled from his coat pocket a pair of worn, taped up batteries, before reaching into the jaws of his wolf.

From behind the gnarling, frozen teeth he fished out a crumpled metal wire.

He eagerly implored me to watch as he hooked the wire up to the battery pack. After a few attempts, the eyes of the wolf lit up. 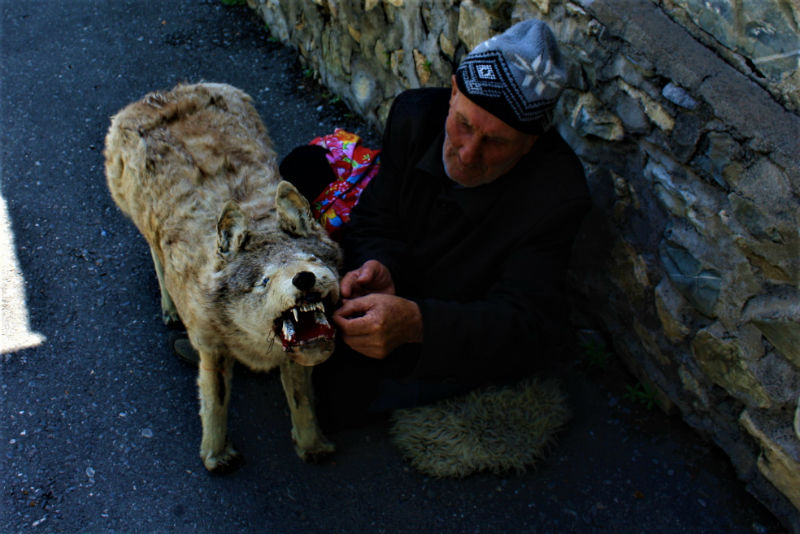 In place of the actual eyes, Cumay had inserted and wired up a pair of small, dull light bulbs into the sockets.

It was quite the sight to behold.

Impressed and yet simultaneously utterly confused, I asked if I could take a picture with Cumay and his masterpiece, infallible proof of my encounter with The Wolf Man of Sheki.

After all, who would otherwise believe that such a bizarre and eccentric character even existed? 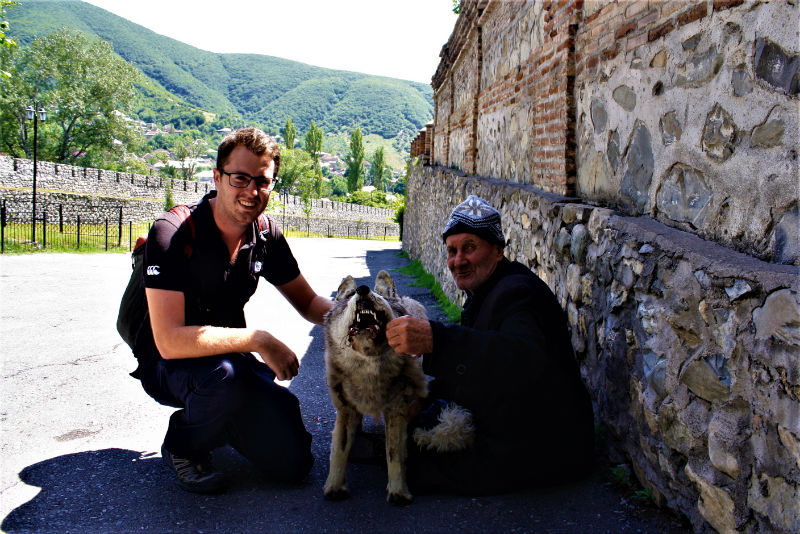 It was time to leave The Wolf Man of Sheki behind me though. I had more questions than answers, and when he reached out his hand to shake mine I gave him a few Azeri Manat as a small tip. I hope that he continues to confuse and bewilder travellers with his taxidermied wolf for many more years to come.

For me, it was time to leave the green mountains, stuffed wolves and beautiful palaces of Sheki behind. I was heading for the big city, to the bright lights and polished boulevards of Baku, but not before a harrowing ride to the bus station with a schnapps drinking taxi driver in a beat up old Soviet Lada… 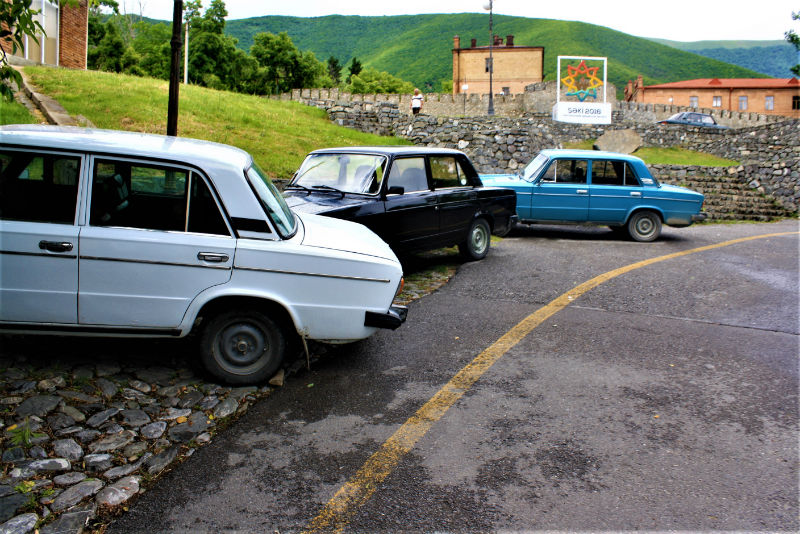 Sheki is a great stop on any Azerbaijan travel itinerary! Aside from The Wolf Man, it really is a green and refreshing city, full of great Azeri food- try the local Piti, a lamb based soup!- and with an intriguing history and culture to explore.

Undoubtedly the best accommodation option is the Karavansary Hotel, which offers cheap rooms in a truly unique setting. It’s near the major sights, and not far from the modern town centre too. When I visited in 2016, their cheapest rates were around 20 AZN (Azeri Manat) per person. You can contact them through their Facebook Page, HERE.

From Sheki it’s easy to catch a bus to Baku, a journey of about 6 hours (or vice versa, from Baku to Sheki). Sit back and watch as the landscape turns dramatically from lush green mountains to arid, rocky desert as you near the Caspian Sea. Busses run frequently all day and tickets can be purchased on the day. A taxi to and from the bus station to the Karavansary Hotel will be no more than 2-3 AZN each way. The main bus station in Baku is connected readily to the rest of the city by the sparkling clean Metro system.

Alternatively, Sheki s a good stop to break up a long journey between Tbilisi and Baku. I travelled from Tbilisi via the border town of Lagodekhi, and then onward to Sheki from here. Tbilisi to Lagodekhi is an easy journey, but from the border you will need to transfer a few times. It’s definitely worth the effort though. Feel free to contact me for more details on the logistics of this particular journey!