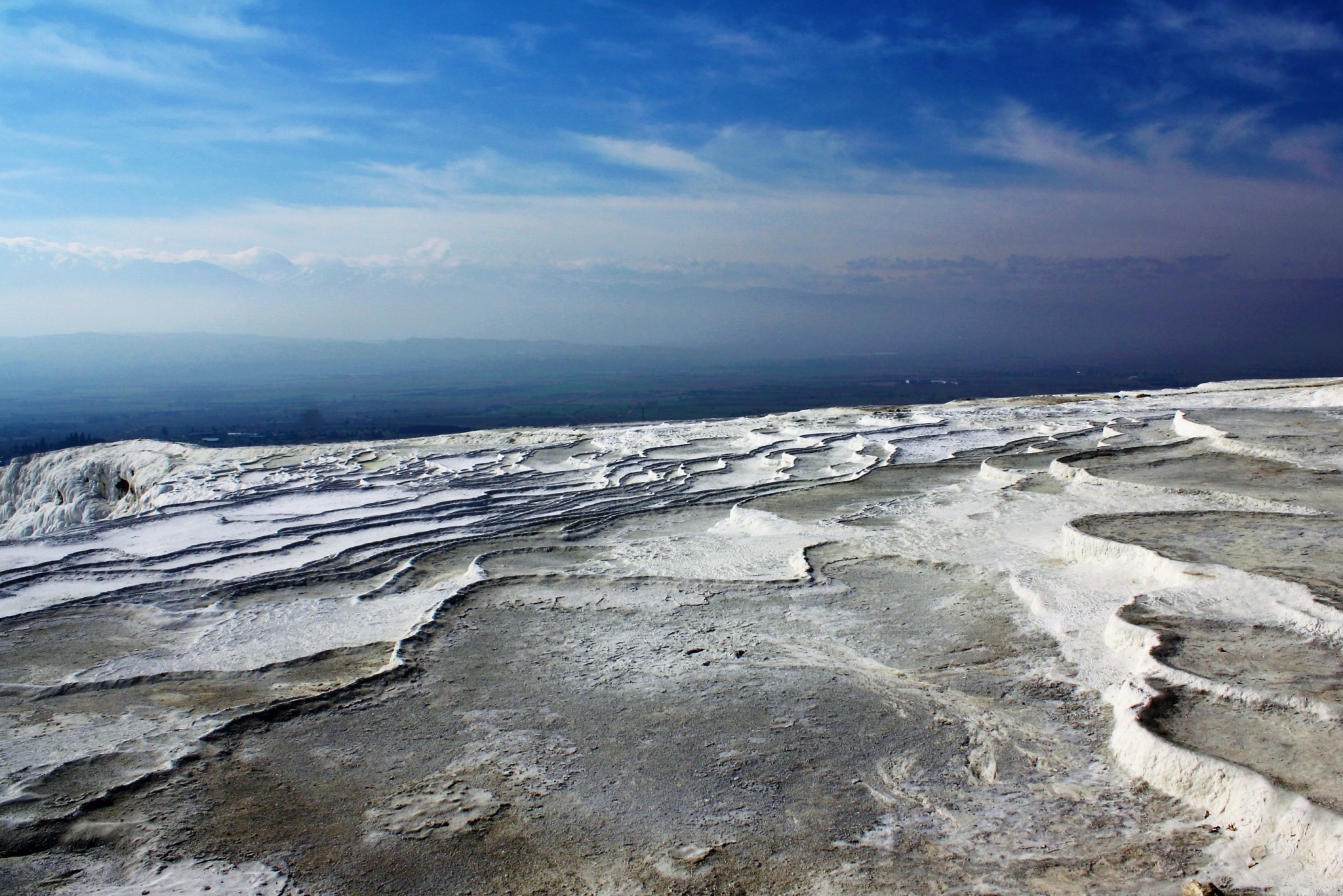 The strange travertines of Pamukkale are a bizarre sight to behold when travelling to Turkey.

The travertines of Pamukkale rise up out of nowhere.

Driving through the flat, arid landscape of central Turkey on the road from the city of Denizli, ahead of me a pure white mountain suddenly reflects the midday sun, dazzling my view of the small, rustic town at the base that I’m heading to. 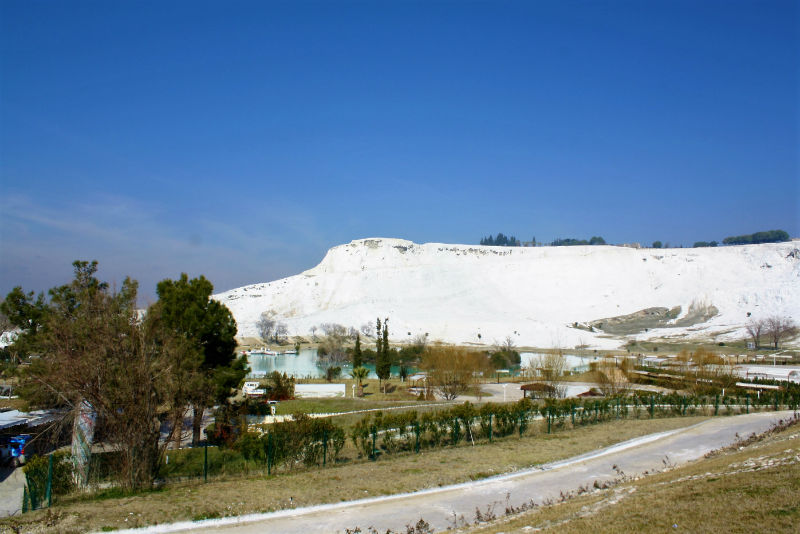 These are the travertines. And they are out of place. They shouldn’t be here. They are a white blotch among the otherwise dry and beige landscape.

Pamukkale, the name given to the strange pools of calcium rich water and their mineral deposits that flow across the mountainside I was now being blinded by translates from Turkish as the Cotton Castle. It’s a good name for a white mountain of calcium. 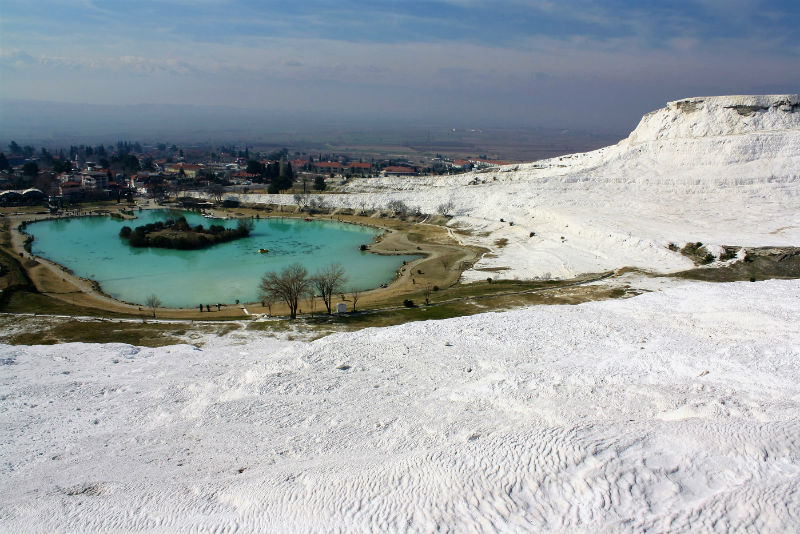 The pools of Pamukkale are hot springs. There’s a geological fault line here and the calcium rich hot water has over time formed the strange shaped travertines that make this sight so striking.

At the base of the travertines, a small town has sprung up. Mostly catering to the many tourists who descend upon the pools.

Nowhere else can you really see such a sight. 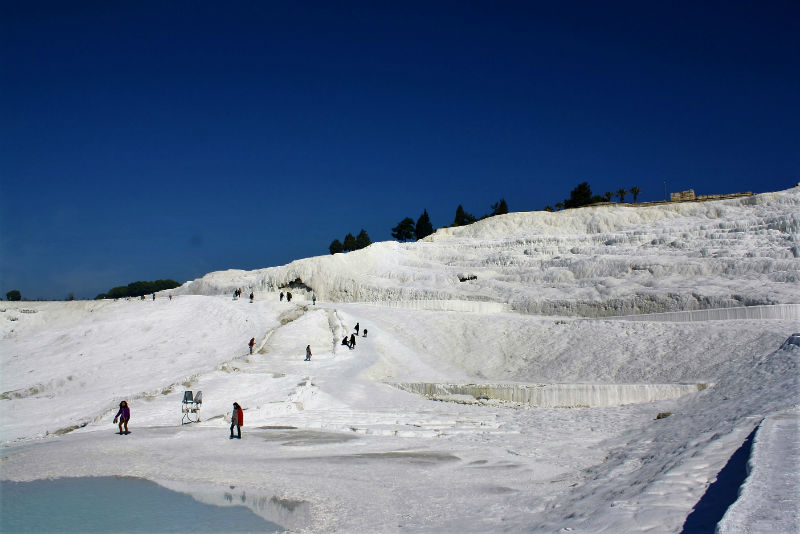 Tourism is no new thing here though. Pamukkale is one of the oldest tourist attractions in the world. The Romans would visit to bathe in the hot springs, soak up the rich mineral water and marvel at the weird landscape.

Thousands of years on, the tourists haven’t stopped paying their respects. And disrespects too.

That means you won’t be alone. And unfortunately for such a natural masterpiece, I think Pamukkale’s glory is slowly declining with every tour bus that unloads its passengers here. The pools themselves have become restricted, to protect them from the hordes, while much of the water has been diverted to form unnatural travertines for you to walk past with more ease on the way up the cliff. 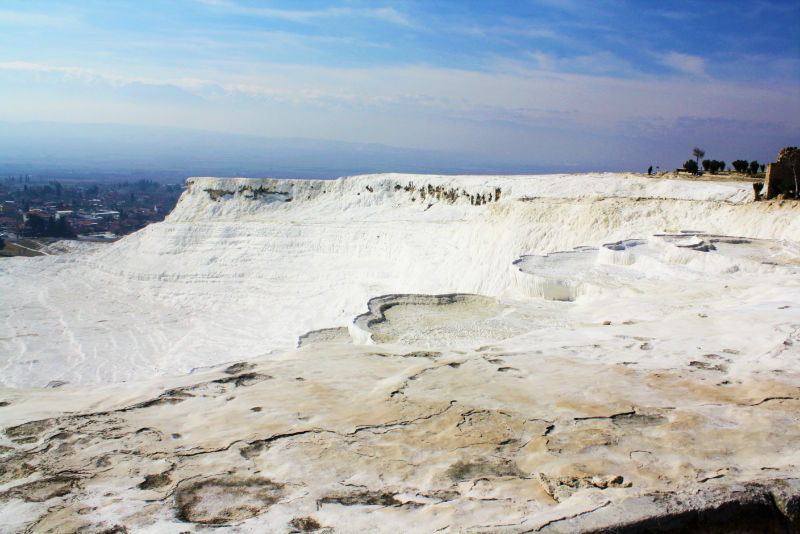 Still, I have never seen such strangely spectacular formations as the travertines of Pamukkale. 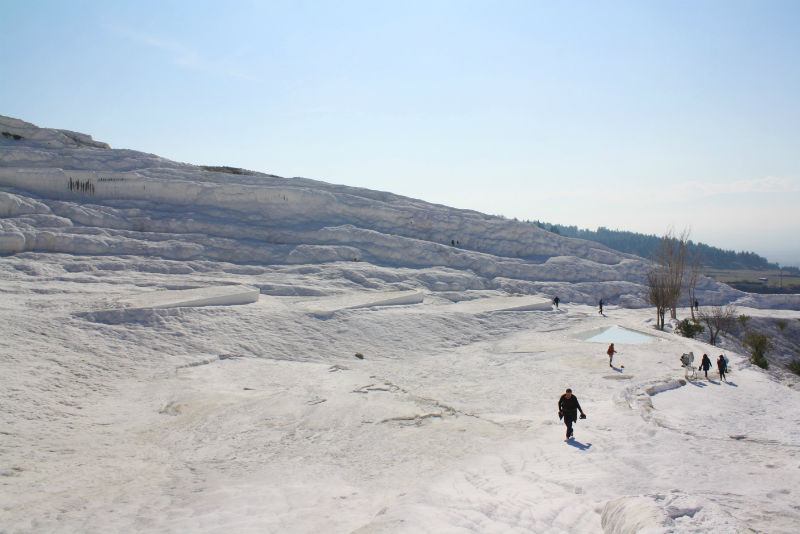 At the base I endured the vendors and tour guides attempting to sell me everything they could get their hands on, and prepared myself to survive the many, many visitors I would be sharing the unique carbonated pools of water and white cliffs with. 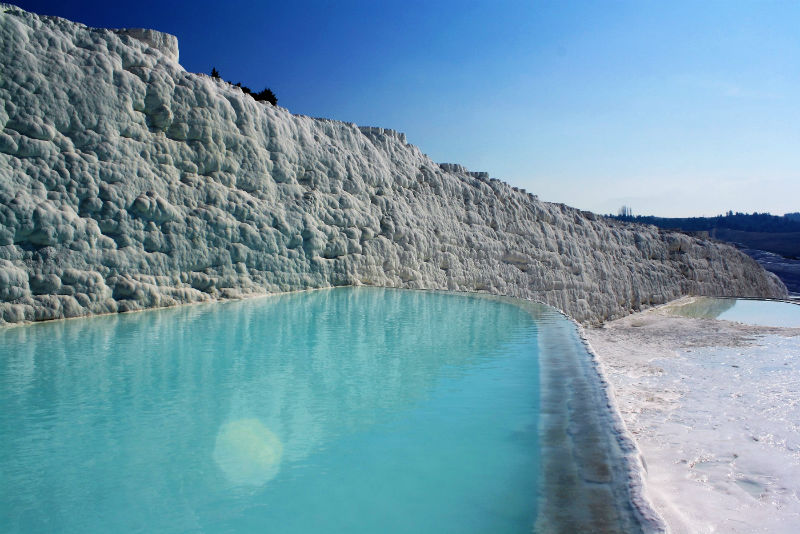 I took my shoes off to walk up the white trail which winds uphill through the travertines. There’s a no shoes policy on the mineral deposits to help protect the sight. There’s even security guards running around barefoot and blowing their whistles vehemently at any who dare to defy the rules. They had truncheons too, just in case things really kicked off. 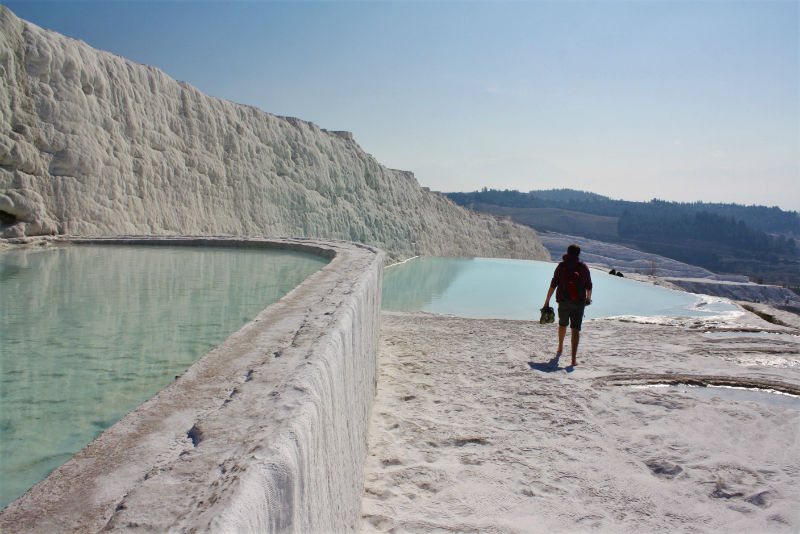 On the uphill path I walk through the pools of hot water and along the white surface of calcium deposits which feel almost like sand on my bare feet. 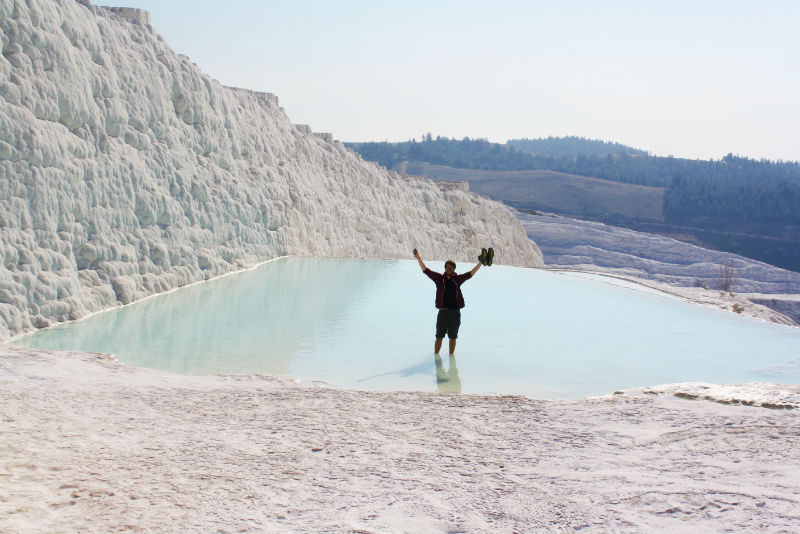 When I get to the top there’s more travertines stretching across the entire cliff, and layered upon one another like an intricate, cotton terrace. 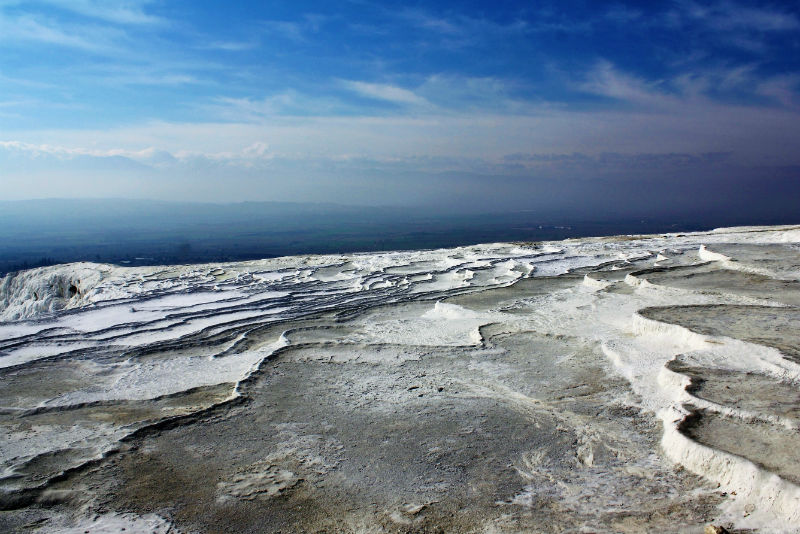 It’s an incredible contrast to the surrounding hills, and dusty plains below me. 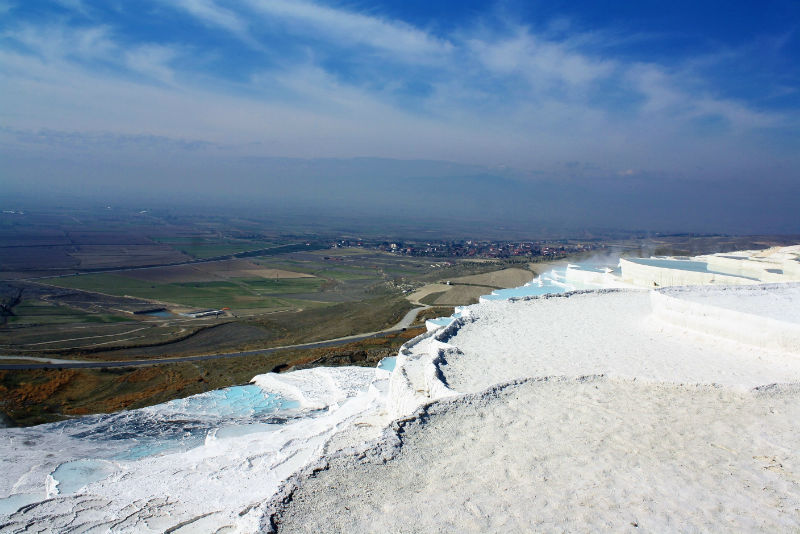 And at the top, after being transfixed by the strange travertines of Pamukkale, I realise that I’m amongst the ruins of an ancient Roman city. Hierapolis was built above Pamukkale to take advantage of the natural mineral water and hot springs. It was a Spa town. An early town built, in many ways, to cater for tourists. Just as the new town at the base of the travertines was too, years later. 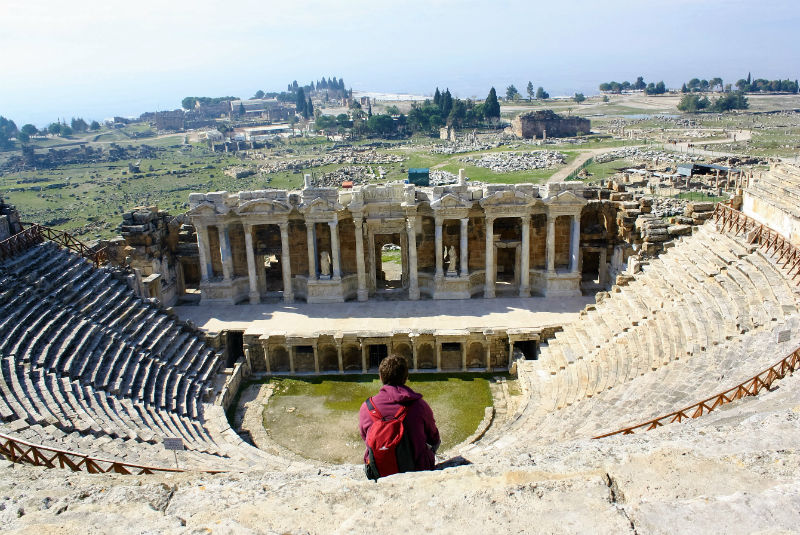 So I did what I always do when confronted with ancient and abandoned ruins. I went swimming of course. Incredibly, a swimming pool has been constructed amongst the ruins of Heirapolis, making use of the hot spring water of Pamukkale. That was an adventure in itself though. You can read more about it in the next instalment of the blog.

How Do I Get To These Strange Travertines Of Pamukkale?

The nearest large city is Denizli. There are connections to here from almost anywhere in Turkey. At the bus station here, you walk to the downstairs bus bays of the large terminal, and there are minibuses leaving regularly to Pamukkale. This journey takes around 20 minutes and will cost no more than a few Lira. There are good and cheap accommodation options in Pamukkale itself. It’s what the town is there for after all.

A lot of bus companies might advertise direct options to or from Pamukkale itself, but inevitably it will involve changing at Denizli, although the transfers are usually included in the cost.

An excellent resource to check the times of the multitude of buses that run across Turkey is the search engine Obilet. Check it out HERE!

In Search Of Authentic Oman: The Nakhal Fort And Nakhal Hot Springs

Sunsets And Beers At The Maquinit Hot Spring In Coron

Bathing with the Romans