The Coral Gardener of Caramoan 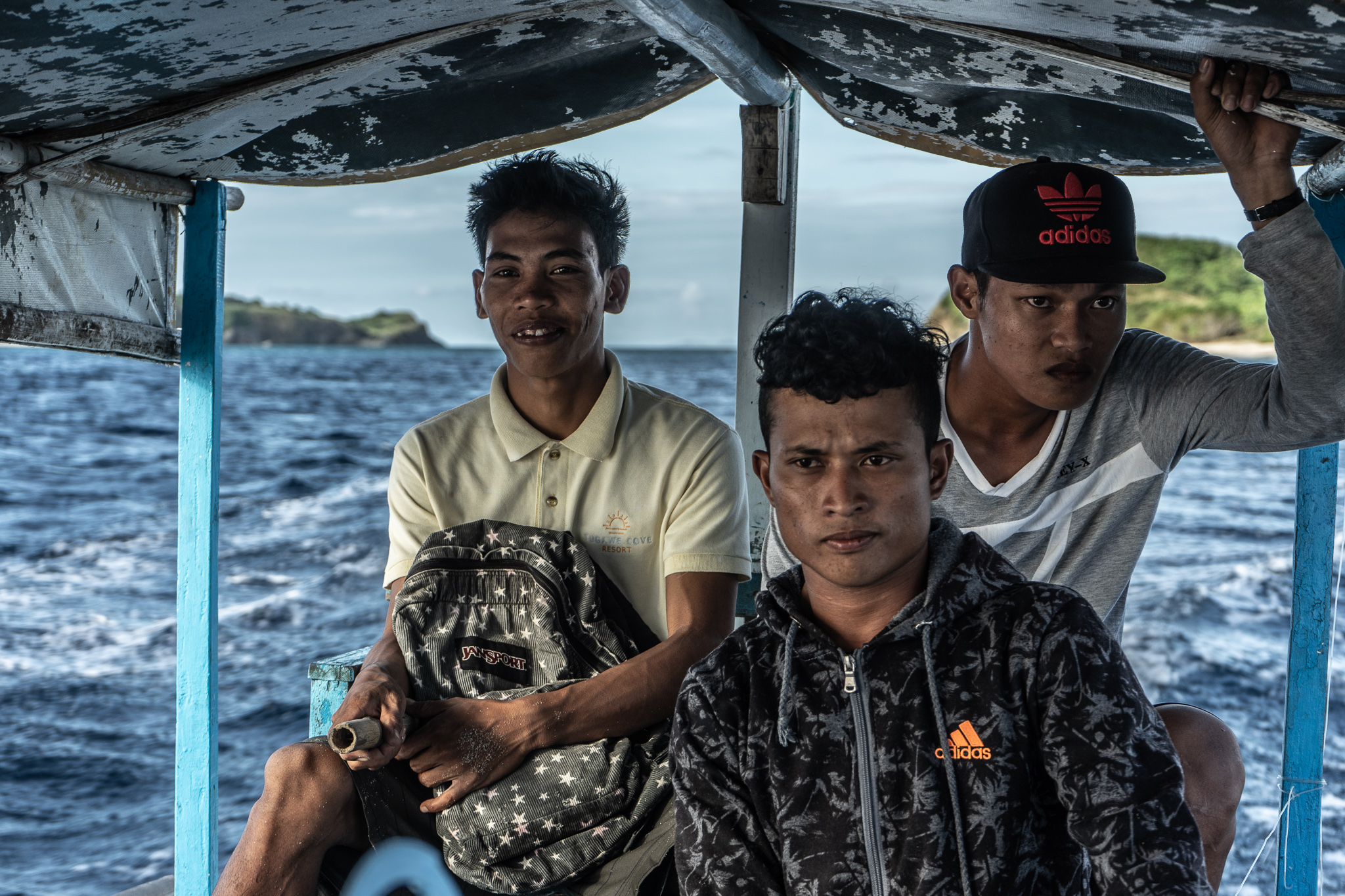 Jomar is just 22 years old. He works full time at a resort guiding tours around the Caramoan Islands – his home in the Philippines – and anything else he’s asked to do by the hotel.

He’s the eldest of 6 children, and he helps to support his siblings through school with the earnings he makes, having sacrificed his own further education to ensure his brothers and sisters can graduate.

In his spare time, Jomar is planting a coral garden off the coast of his island, single handedly trying to save the local reefs with little outside support, before it’s too late.

Jomar Bracero is the Coral Gardener of Caramoan. This is his story, the story of one young man trying to make a difference against the odds, as he tries to save his local environment and the coral that he loves so much.

Jomar works at the Tugawe Cove Resort, a hotel situated in a remote location in Luzon, that’s part of the Caramoan Islands. It’s an area of tropical islands, sandy beaches and dramatic scenery. It’s precisely how you would imagine the Philippines to look; it’s almost as if it’s been transplanted here directly from an Instagram feed.

Jomar’s home island is a half hour boat ride away, if the weather is good. Big Katanhawan as it’s called was regulalry used to film the TV series Survivor, where contestants are stranded on a remote island to compete and fend for themselves.

Despite the almost cliche beauty that’s found on the surface, beneath the waves, things aren’t quite as pristine.

Much of the region’s once abundant coral has been destroyed by dynamite and cynaide fishing over the past few decades – a practice which still continues today, despite its illegality.

Jomar, despite his young age, and huge family and work commitments, is trying to shake things up though, because, he tells me, he “doesn’t want his brothers and sisters to grow up in a world without coral”.

Being local to Caramoan, Jomar was tasked with showing me – and my fellow tourists – around the islands here. A quiet man, he guided our boat with his two friends to a pebbly cove along the coastline.

Here, we found plastic bottles and rubbish washed up on the shore, an unfortunately common sight these days across Southeast Asia. Before long, Jomar had produced a large rubbish sack and was soon clearing the beach of whatever plastic he could see.

Rather than admiring the views, our group and our boat crew were busy picking up rubbish. I wondered, would this be the future of tourism in places like Caramoan? A strange sort of ethical travelling whereby we attempt to reverse the mess of our own making. Of course, it’s not a bad thing, but it begs the question, how did we get into this situation in the first place?

Caramoan is in many regards still rather ‘pristine’ and ‘underdeveolped’, at least in comparison to other Filipino destinations – such as Boracay for instance – and other plastic-strewn areas in Asia that have struggled with over tourism, Bali being one of the most examples.

Caramoan though, has yet to see the huge level of tourism that other destinations have, but if already, the coral reefs and the beaches are beginning to see the strain, how are places like this going to survive if there is an increase in visitors searching for that ‘pristine’ island getaway?

Jomar captains our outrigger boat across the waters and into the archipelago, and before long we have arrived on a sandy beach, that’s fringed by palm trees and lying in the shadow of limestone karst rocks.

This island is Jomar’s home. This is Big Katanhawan, one of the the locations of the Survivor TV show, that’s home to a small community of locals. Jomar and his crew are soon setting up lunch, cutting coconuts and catching chickens.

I’m introduced to Jomar’s Aunt, Lisa, who’s busy untangling fishing lines in the porch of her rustic wooden house, which is built under palm trees. Jomar and Lisa count the number of people on the island. There are 32, but right now it’s quiet because most of the children are at school on the mainland, while lots of the men are out fishing.

Surprisingly, I learn that Big Katanhawan, and many of the other nearby islands which are home to similar, small communities, are not necessarily the ancestral domains of indigenous tribes as I’d expected – particularly after visiting Coron, in Palawan on a previous trip and meeting the Tagbanua there – but are in fact relative newcomers to the area.

In the 1970s, due to overcrowding and lack of land and opportunities on Luzon, many families voluntarily migrated to the islands, despite the threat of typhoons that had kept these remote parts relatively unpopulated until then.

In many ways, these are the true survivors, settlers who domesticated a deserted island and made it their home.

Overcrowding and compeition, is a problem the Philippines struggles with.

And these problems have led to environmental issues on a local level, to over fishing and the destruction of coral. But if you could find an easer way to get more fish to sell and to feed your family in the short term, wouldn’t you if you needed to?

After snorkelling off the beach of Big Katanhawan, enjoying a Filipino style lunch, before exploring a few more isolated and empty islands, we were taken back to the hotel in Caramoan by sunset.

That evening, Jomar proved the long hours he worked – as did all the staff at the resort – as he helped with the BBQ that was being prepared for guests on the beach, using an old wooden fishing boat as a serving table and cooking area.

This was the appeal of Caramoan to tourists. This is the island life we look for in destinations like the Philippines. But for people like Jomar, things aren’t perhaps so laid back as they might try to make it appear.

During dinner, Jomar, who proved to be a budding photographer, began taking pictures of our group around the fire, and after a whole day spent together, he began to open up to the group’s questions about island life.

Until now, he had been relatively quiet and he had yet to reveal the existence of his coral garden to us. He was clearly a hardworker, and Jomar, it became readily apparent, prefers to act, rather than to talk.

“Most days I wake up around 3am”, Jomar expains. “I light a fire and I cook breakfast for my younger brothers and sisters before they go to school. Then I come to work here”.

The local school is just down the road from the resort, in the nearest town, but to get around means travelling by boat every day.

“I wanted to go to college, but I left school because my family needed money. When my brothers and sisters have graduated, then I will go back to learn again”.

“I get 5 days off a month”, he goes on to say, before the humble reveal of his alternative life outside of working here at the hotel. “I spend 2 of those days with my family, and the other 3 I use to plant coral”.

Jomar gives this last fact as if it’s the most normal thing for a young to be doing in his precious spare time. But for Jomar, his question is “why aren’t more people doing it?”.

The Coral Gardener of Caramoan

Pressed with questions by the group, Jomar opens up about his life as a coral gardener. “I first started planting coral when I was maybe 14”, he says, “in 2008”.

“When I grew up, there was much more coral here, and I wondered what was happening to it. I didn’t want my brothers and sisters to grow up in a world without coral, so I thought I should plant some more”.

This seemingly simple solution to a problem has meant that Jomar has been working on his coral garden for years, and he has received little help from anyone else. Most of his school friends left to find work in Manila or other cities awhile those few that remained in the area couldn’t be persuaded to help – it’s quite an ask of one teenager to another – and so he decided to act on his own, buying coral cuts with his own money and planting them on the ocean floor.

Lots of the coral in Caramoan was destroyed by local fishermen using unsustainable and destructive , and Jomar explains how he even managed to get some boats confiscated by the local authorities after he proved that the fishermen were using dynamite.

“That boat there”, he says pointing at the wooden fishing boat that had been used for our dinner buffet, “that was one of the boats they took”.

Throughout our day touring around his home islands, Jomar hadn’t thought any of this worth mentioning. He’s always worked alone on his coral garden, and he presumed that no one else would be inetrested in seeing it.

He’s doing it for his brothers and sisters, and despite the odds stacked against him, he humbly continues his work as the Coral Gardener of Caramoan.