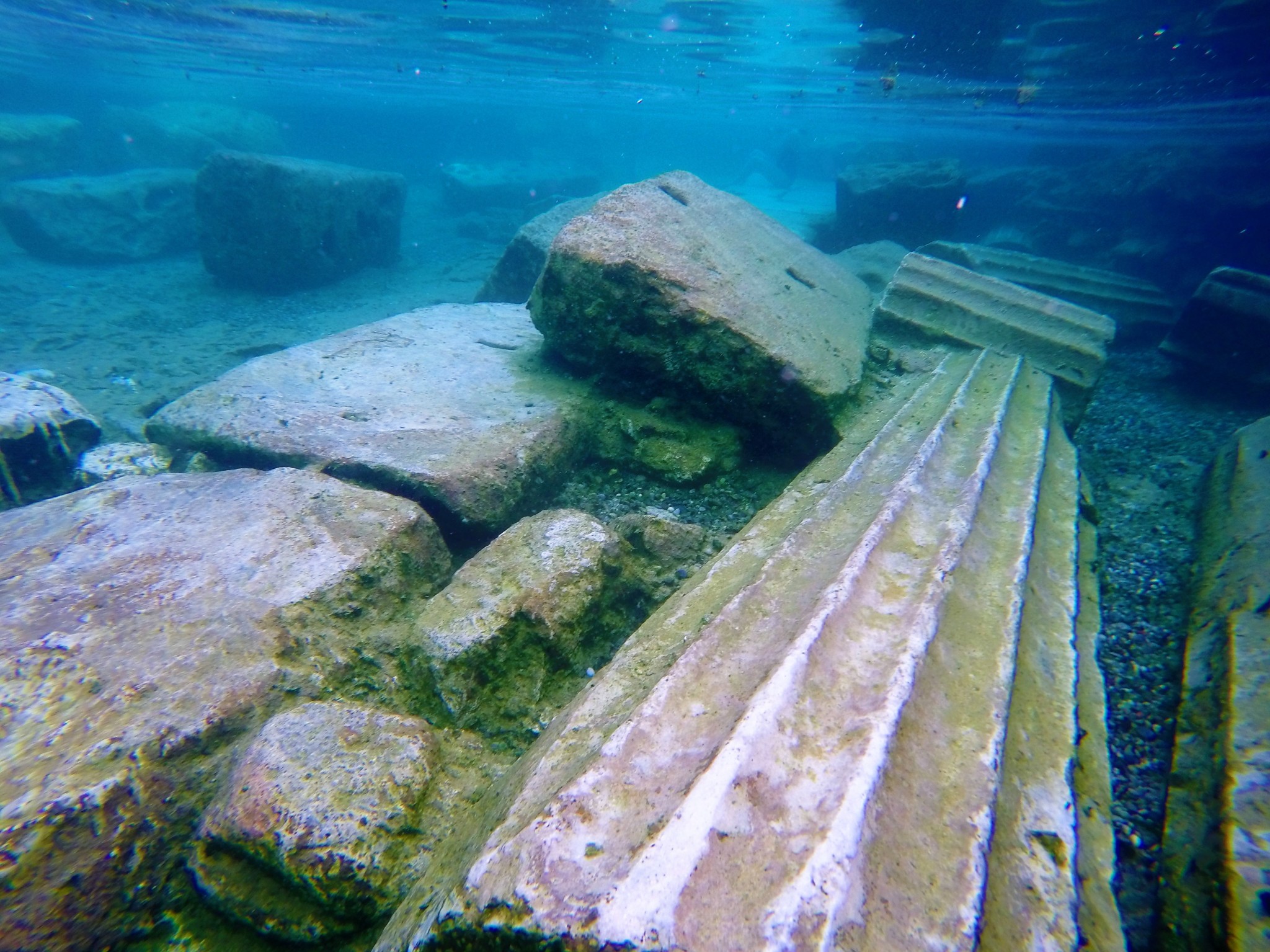 I went swimming in the Antique Pool of Hierapolis, in the ruins of an ancient city by the travertines of Pamukkale.

Pamukkale. Turkey’s busiest tourist attraction. And I was right in the middle of it all. Evading touts and dodging tour guides. It was like a deadly game of escape and evasion- usually the type of game played out by war criminals or downed fighter pilots I suppose- attempting to find one solitary point along the white travertines and hot springs to enjoy the sight for myself. 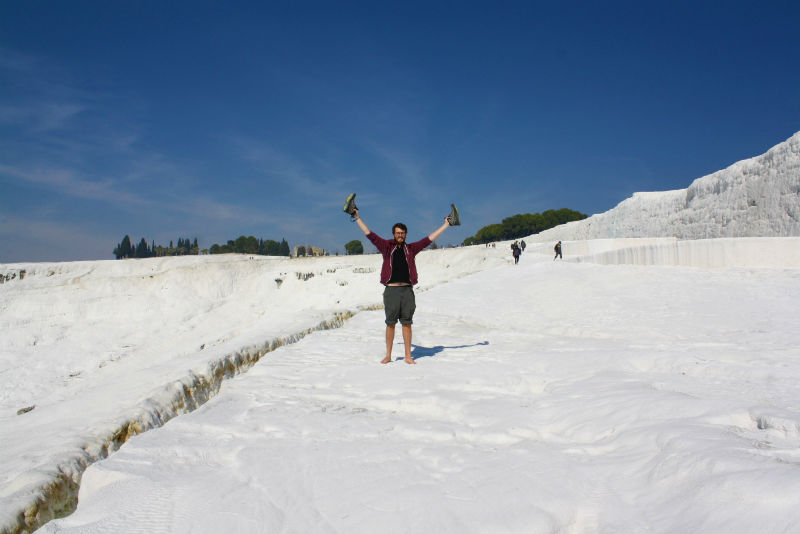 Always I’d be caught though, the tours were never far behind.

The strange travertines of Pamukkale were a bizzare sight to behold- I’ve written more about these strange mineral deposits that have created an entire white mountain in an otherwise beige and arid desert HERE- and despite the popularity, and touristy nature of the attraction, it’s a unique place. Just over run. 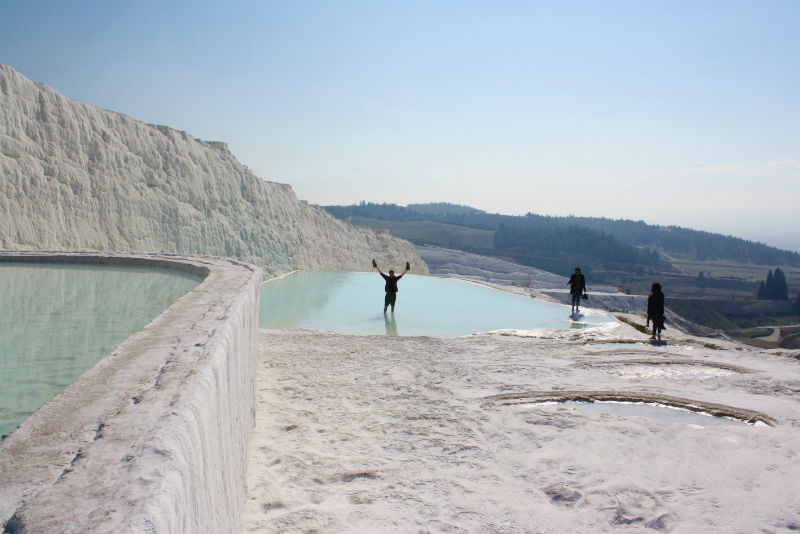 Luckily, there were only two randomers in this picture of me…

So, exhausted by the survival game being played out along the top of the ridge, as every man, woman and child fought bitterly to their grizzly deaths for access to the most prominent selfie points at Pamukkale, I escaped into the ancient ruins of Hierapolis, the city which was built and abandoned above the travertines. It’s a bit quieter in the ruins… 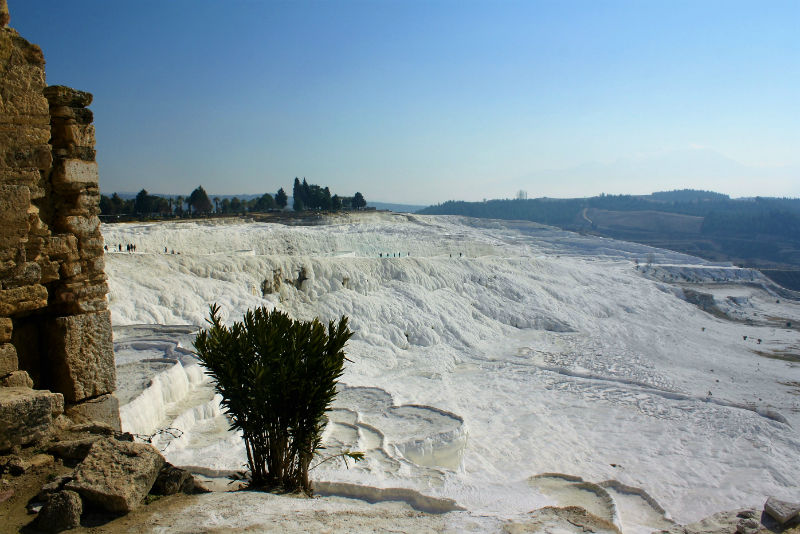 Pamukkale is one of the most popular tourist attractions in Turkey. It’s also one of the oldest tourist attractions in the world. The city of Hierapolis can trace its roots back to the 2nd Century BC, when the first thermal Spa was built above the hot springs by the Greeks who were settling in the region. Pamukkale, it would seem, has known nothing but tourism during the history of humanity. 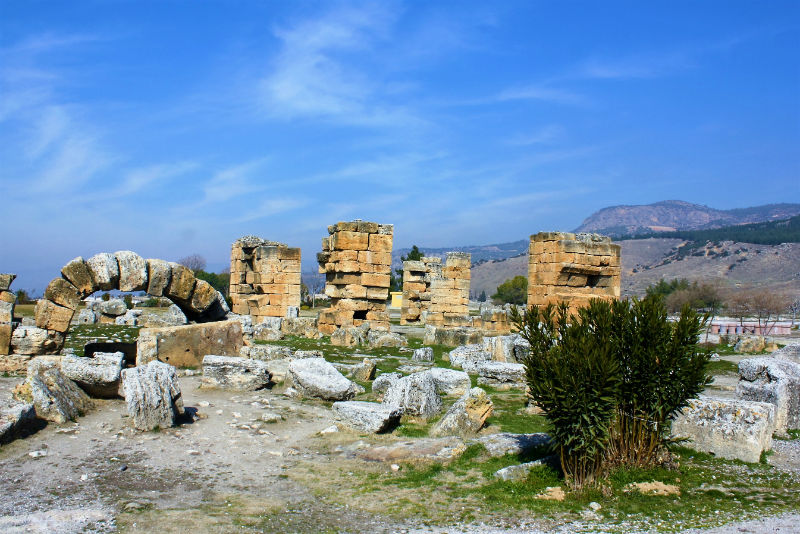 The Romans soon followed, and turned Hierapolis into a thriving city, with the Spa at the centre of it all. Visitors would flock here from across the Empire, to bathe in the waters, to soak up the rich minerals and to seek the supposed healing qualities of the Spa to cure their ailments. 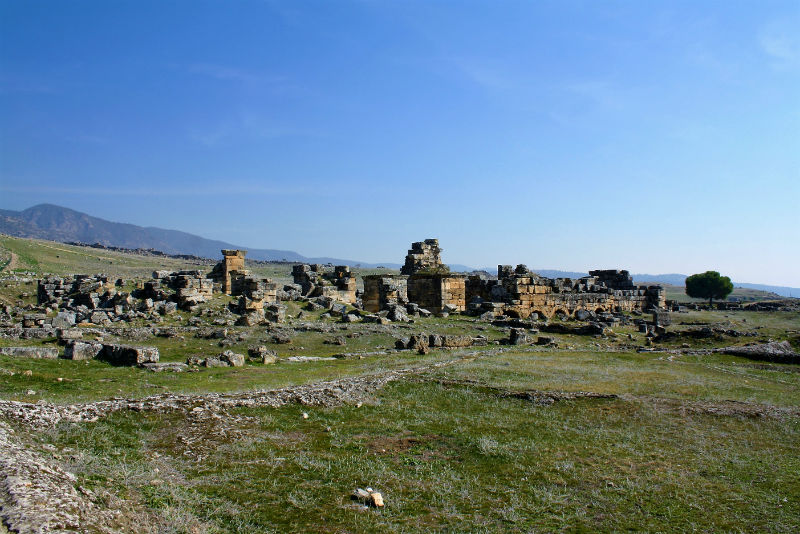 Hierapolis was a city associated with the Gods, and sacred temples were constructed and worshipped in for centuries. The ruins of these temples are still a prominent feature of the ancient city. 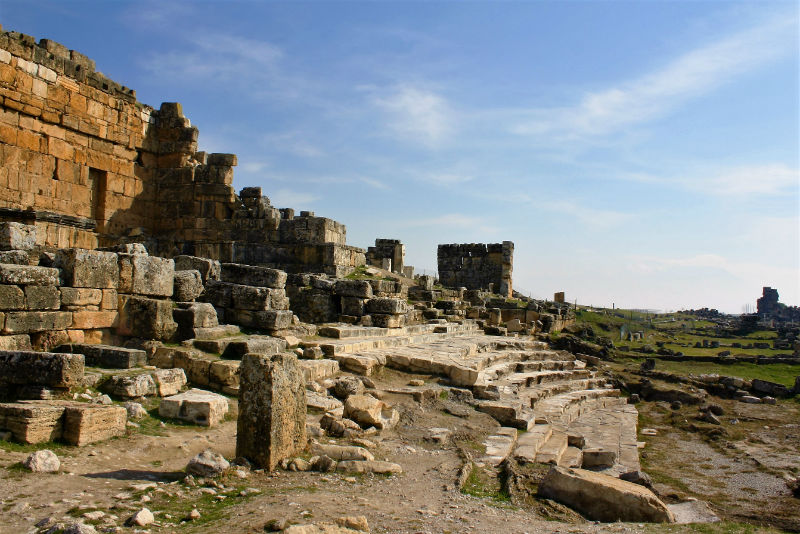 The Gods couldn’t stop the city from succumbing to the ravages of earthquakes and war however. After reaching its peak under the Roman Empire, Hierapolis was slowly depopulated as nature and then Persian and Turkic invaders ravaged the city, before it was finally left abandoned for good in the Medieval period. 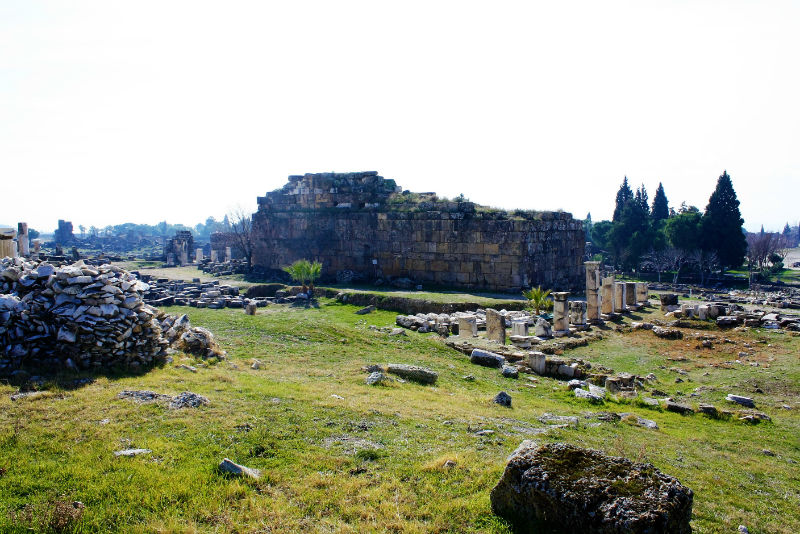 Modern times saw the ruins excavated, and partly restored in places. The real achievement was the restoration of the huge outdoor theatre. Now it’s a sight that can even compare to the travertines of Pamukkale, except despite being only a 20 minute walk from the white calcium cliffs, none of the tour groups seemed to even bother with it. 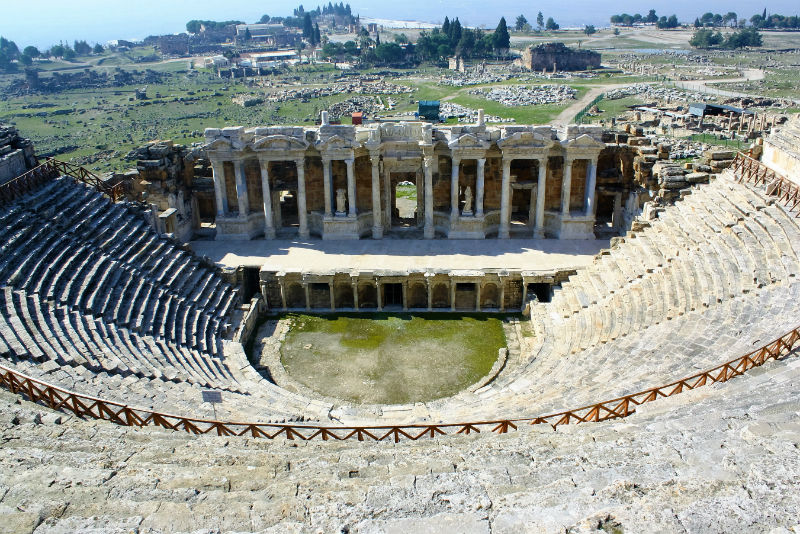 And even better than the grand theatre, was the chance to swim in the Antique Pool of Hierapolis, in the ruins of the ancient hot springs that were used by travellers and tourists in days past. After a day at Pamukkale, it was the only way to relax. 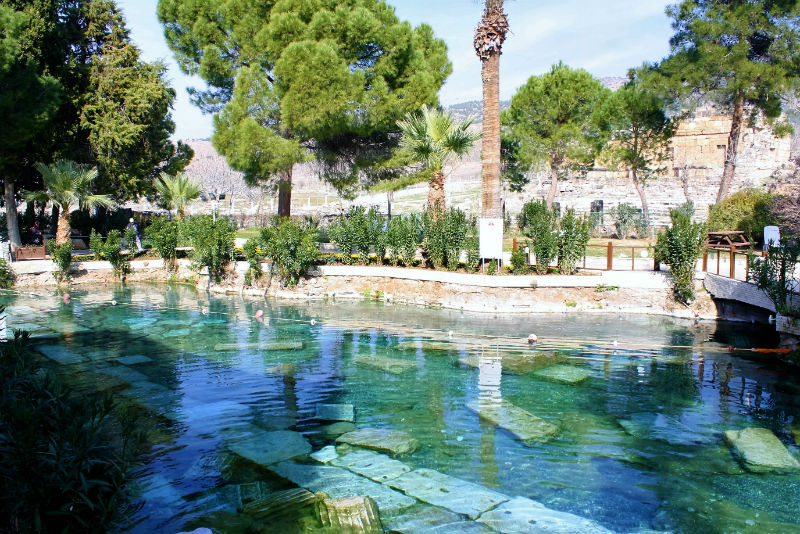 It’s a hard life being a tourist. 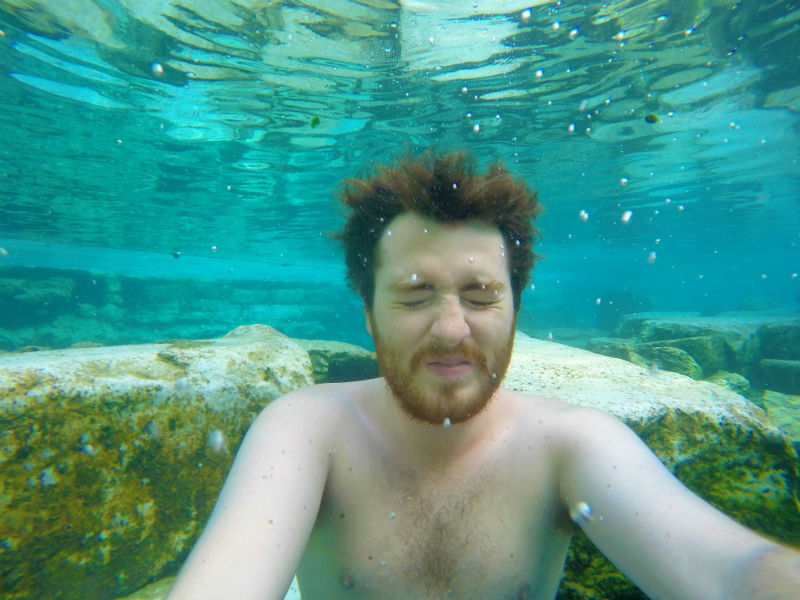 A failed attempt at an underwater selfie…

The Antique Pool of Hierapolis- also known as The Cleopatra Pool– was one of many baths used by the Romans centuries ago, and now the same site is still used as a Spa centre. 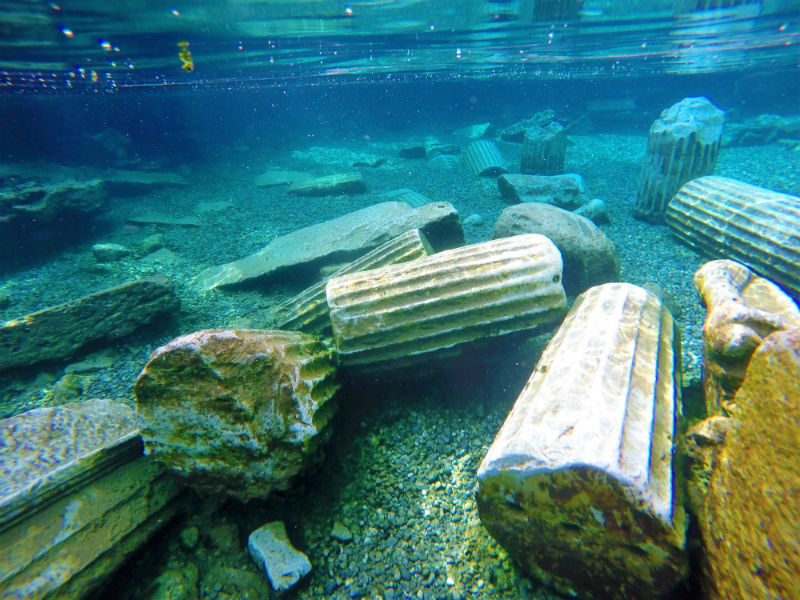 The pool is built on the same hot springs that were used in the ancient city by locals, travellers and pilgrims. Today, the tradition is carried on, although there’s also a bar, changing cubicles and lockers of course for the modern visitor. 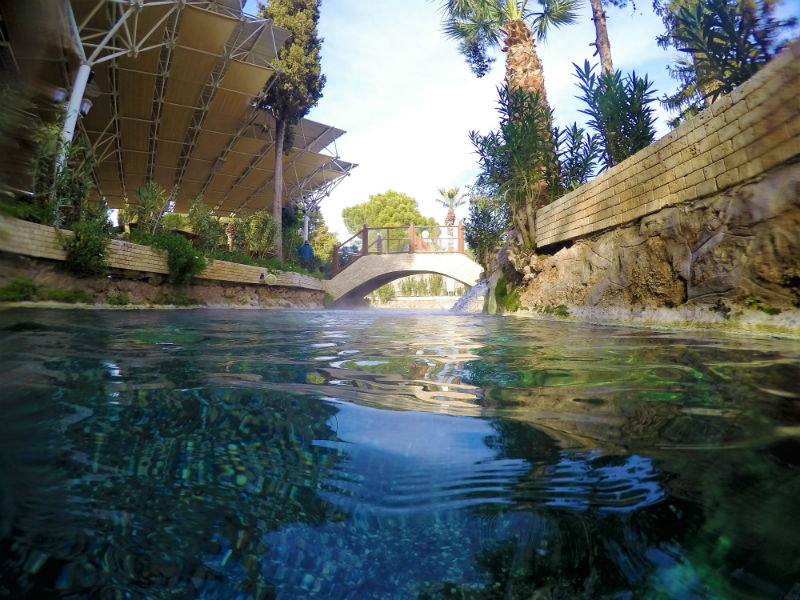 What’s unique about the Antique Pool, is that the waters surround the ruins of a previous Spa.

I was literally swimming in the ancient ruins of Hierapolis. 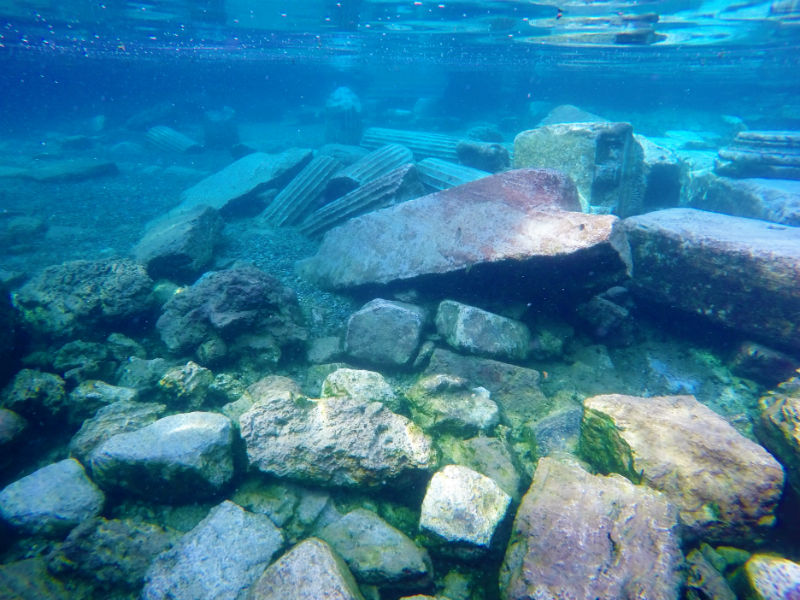 The pool itself is a constant warm temperature. Around 35 degrees. Hot stuff.

You can lounge around on the ancient marble columns that have fallen in the waters- some I expect have of course been deliberately placed here to make it more ruinous in nature, but I can overlook that, because it’s god damn awesome to be swimming in ancient ruins. 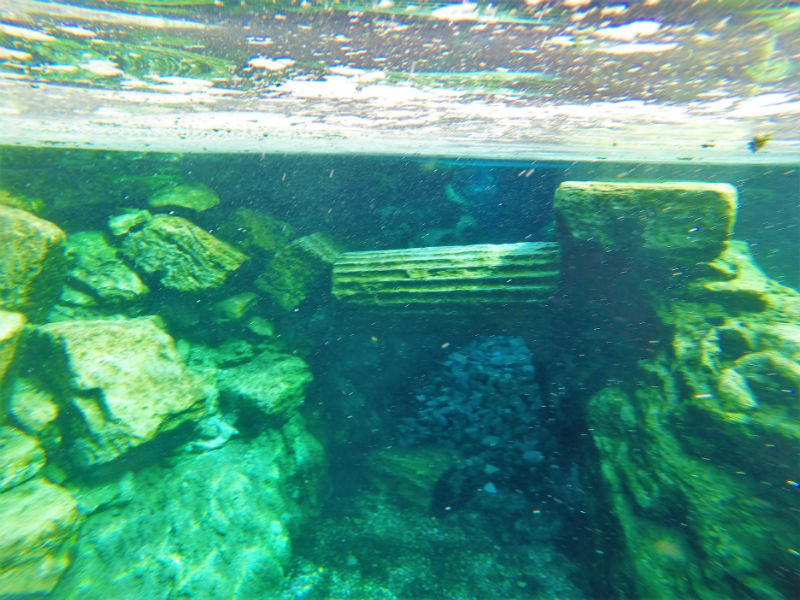 Supposedly you can drink the water too. For any number of numerous health benefits. A lot of people go swimming here though, so I’ll leave that decision down to you. 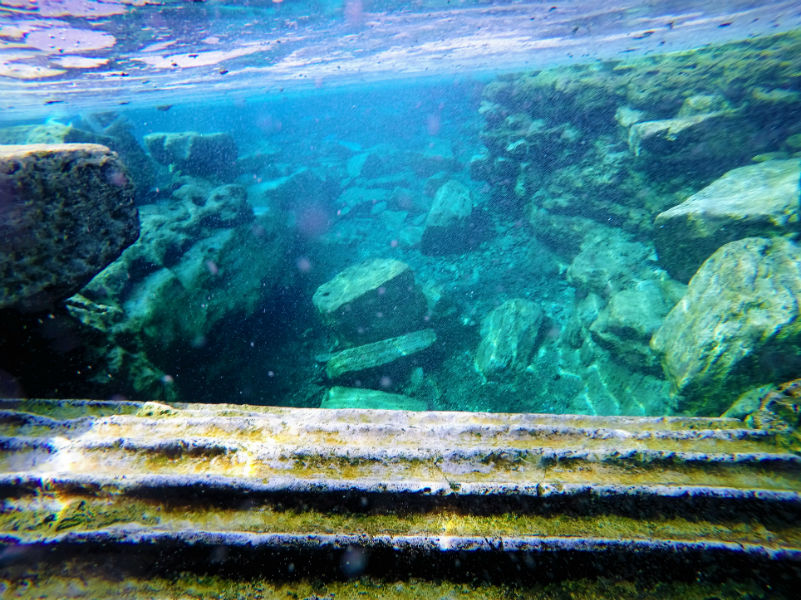 Underwater there’s a multitude of pillars, broken statues and old stones from the buildings that once stood here.

Hierapolis is a real marvel of the ancient world, and I was swimming right in it! 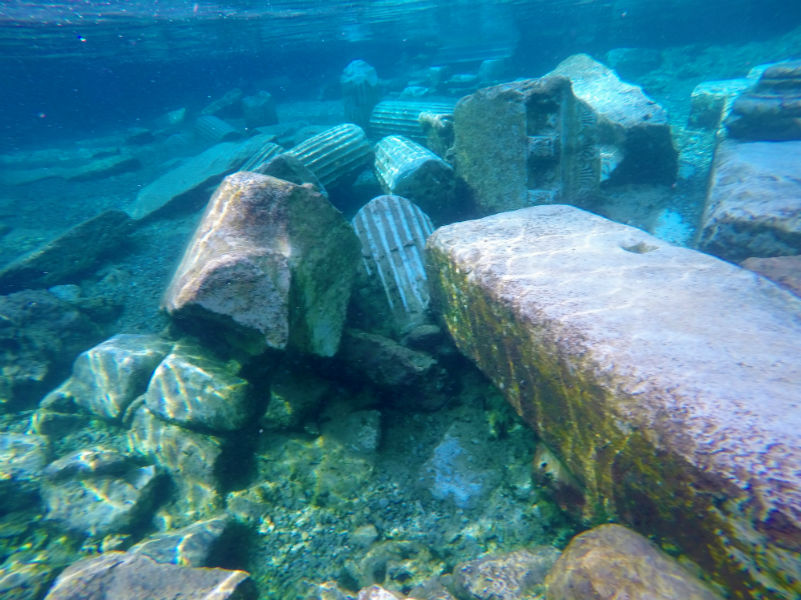 What better way to relax after the travertines of Pamukkale than with a relaxing swim in the antique pool of Hierapolis?

Entrance to the Antique Pool cost me 32 TL. Quite pricey by Turkish standards, but worth it just to say I’d been swimming in the ancient ruins of a UNESCO World Heritage Site. There’s a bar, restaurant and lockers by the pool itself, so you can spend all day lounging around in the thermal waters and looking out over the ruins of Hierapolis. 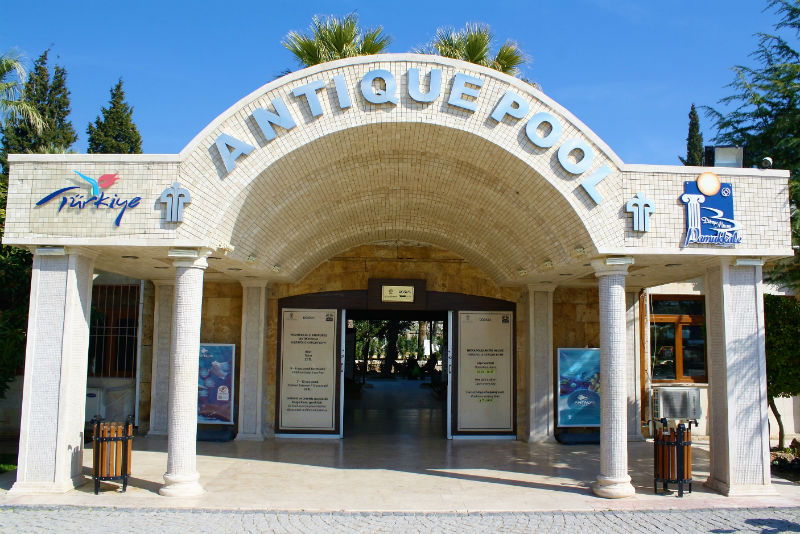