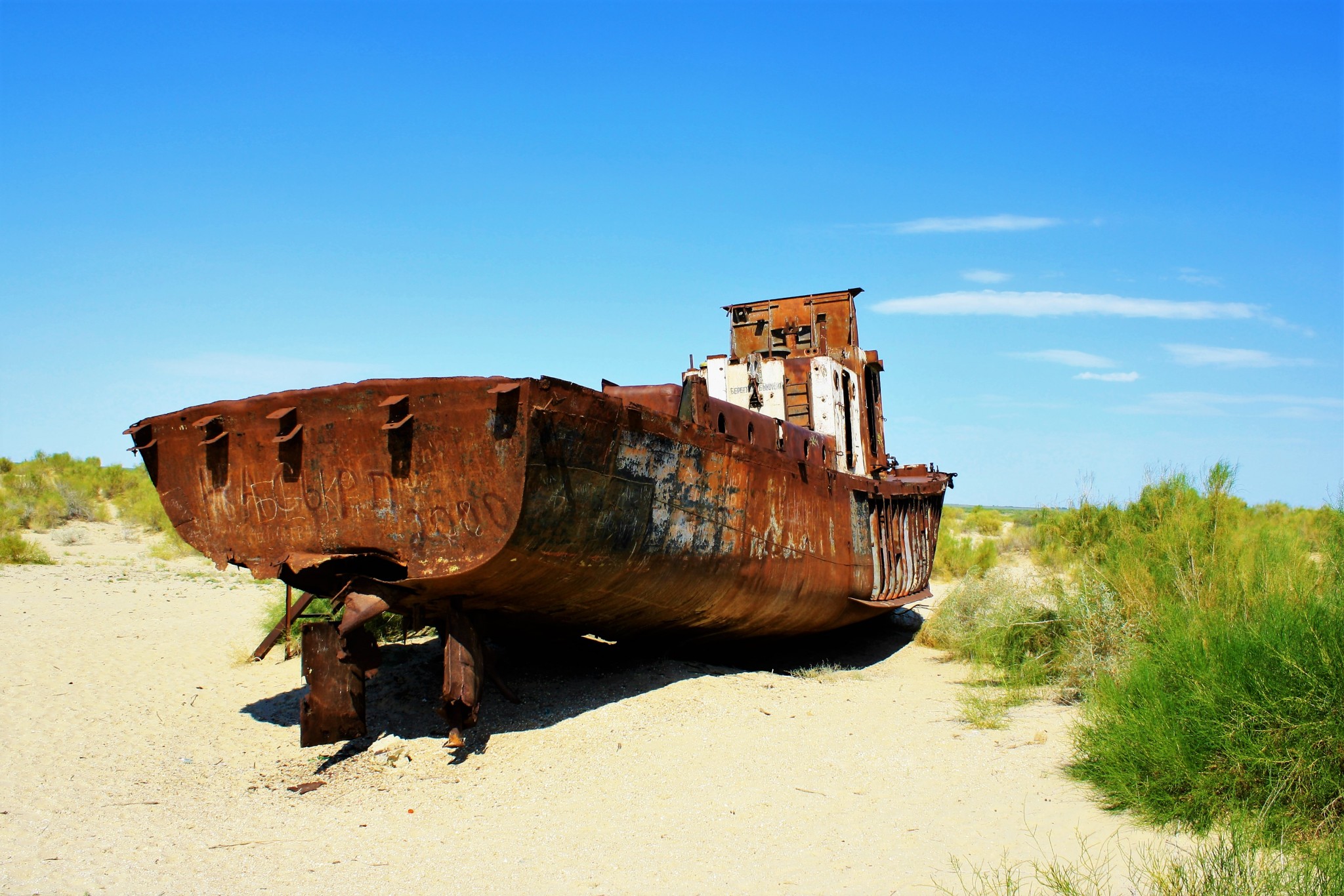 The rusting ships of the Aral Sea are grounded in the deserts of the once thriving fishing town of Moynaq Uzbekistan.

“Mister! Taxi! Taxi!” I’d just stepped off the 24 hour train from Kazakhstan and into the scorching heat of the Uzbekistan desert, and before the train station gates even opened the taxi drivers were eyeing me up, the only Western looking guy on the train.

The flood gates opened and the taxi drivers began hassling and grabbing people. I was shoved unceremoniously along with the crowd and into Kungrad, the last town in Uzbekistan, but the first for me. This was Karakalpakstan, the desolate empty space in the far west of the country, hundreds of miles from anywhere. 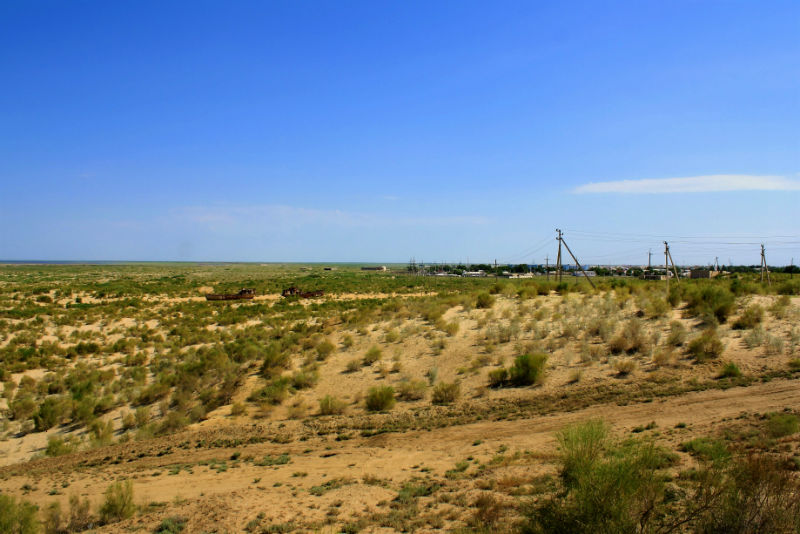 The Edge of The Aral Sea….

I Was Going To Moynaq

“Where you go?” One driver grabbed me by the arm and tried to force me into his taxi. I was going to Moynaq, a once thriving village that stood on the edge of the infamous Aral Sea, but that was now home to rusting ships and old fish factories. A terrible example of the cost of a human caused environmental disaster.

Eventually the aggressive taxi drivers did leave me alone. It’s a hard life out in the extreme Stan of Karakalpak. It’s isolated, desert like and in summer it’s hot. Really hot. Soviet rule left the region economically devastated, as the major sources of income from the Aral Sea were wiped out when the rivers which fed what was once the fourth largest lake in the world were diverted to provide irrigation for agricultural production, leaving the land polluted, dry and devastated. 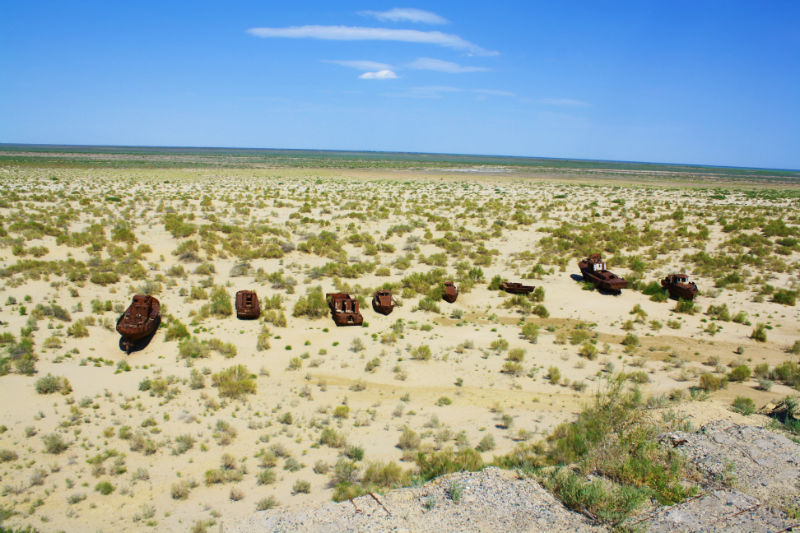 The Pot Holed Road To Moynaq

I wanted to see this disaster for myself. In a perverse way, I suppose to see what humanity is capable of.

Outside the station I found a fixer type guy named Azamat who spoke reasonable English- my Russian skills being terrible and my Uzbek none existent at this point. He offered to take me to the market, where a shared taxi left irregularly for Moynaq whenever it managed to fill all the seats.

We drove through the ramshackle, dusty streets of Kungrad, and not far from the station, the Central Market- a few stalls and Somsa stands- was baking in the midday heat. Azamat led me to a friend who ran a black market money changing business. I had some US Dollars to exchange, and the government rates in Uzbekistan are ridiculously low compared to the unofficial rate. Azamat’s friend, was waiting at the side of the road surrounded by plastic bags. These were full of cash. A single US Dollar is worth around 6000 Uzbek Som, but the most common note is only the 1000 Som. I changed up a single hundred dollar bill and was left with my own plastic bag full of cash.

Azamat then drove me over to the shared taxi stand, and I ate some Somsa- the Uzbek variant on a Samosa- while I waited for the car to fill. Within an hour, we had enough passengers, and I was off on the pot holed road to Moynaq.

What was once a fishing town…

Moynaq was a fishing town, spread around the shores of the Aral Sea, but when the waters receded, the town was left stranded in an ever worsening desert. People left, fishermen grounded their boats, and factories went out of business. Now that the Aral Sea has shrunk to only 10 percent of its original size, only a few thousand people call Moynaq home. 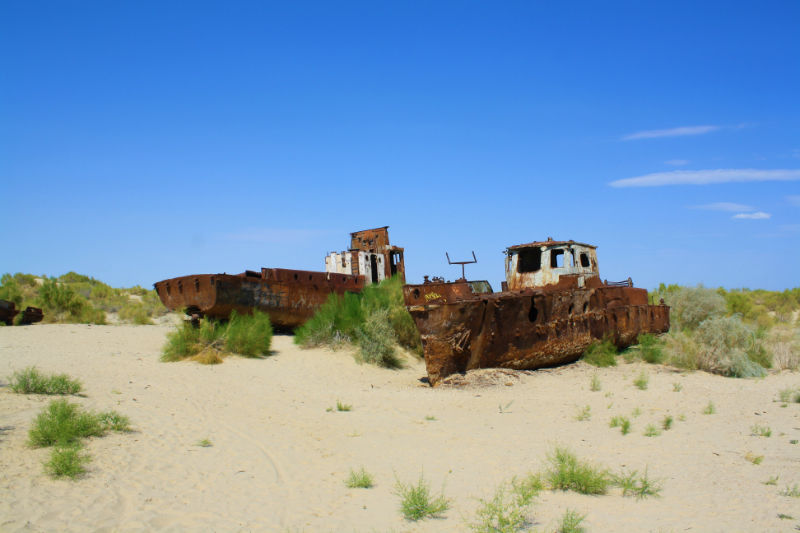 On the entrance to town, a huge sign stands on the side of the road with the name Moynaq emblazoned above a depiction of a fish. But there’s no water within sight. What’s left of the Aral Sea is now miles away, polluted and devoid of fish. 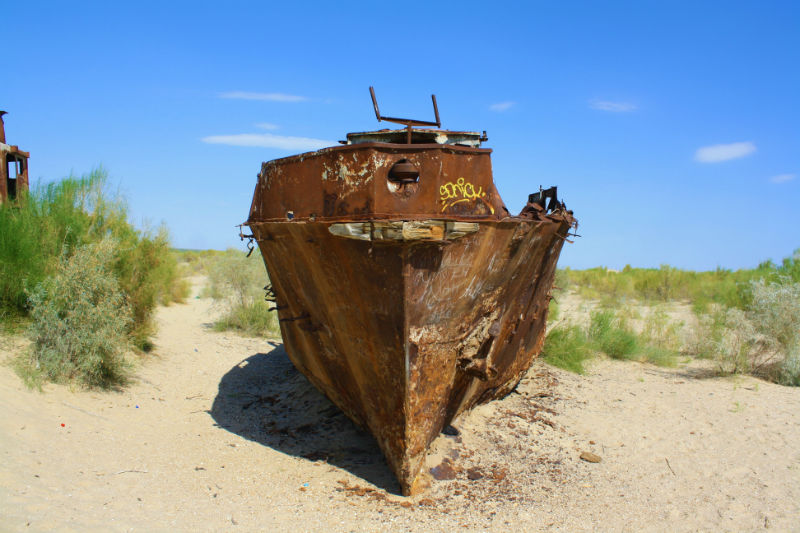 I wanted to stay the night in the town, to explore not just the ships but the old canning factories and perhaps even the museum I’d heard of, if it was still here that is. The one hotel that was rumoured to remain in Moynaq though, was closed. For good it seemed. 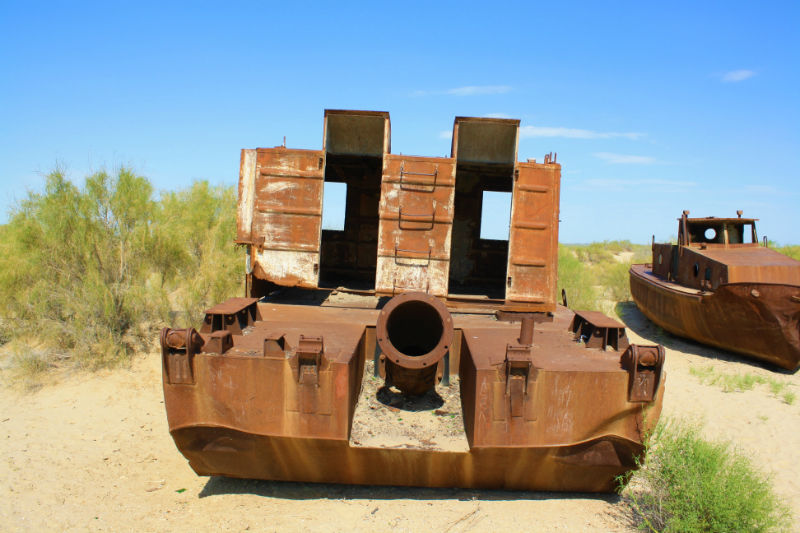 So I went straight to the ships, knowing that I needed to then find a way out that evening, as tourists in Uzbekistan have to be registered each night at government approved hotels. A rule that meant I couldn’t get stranded here. 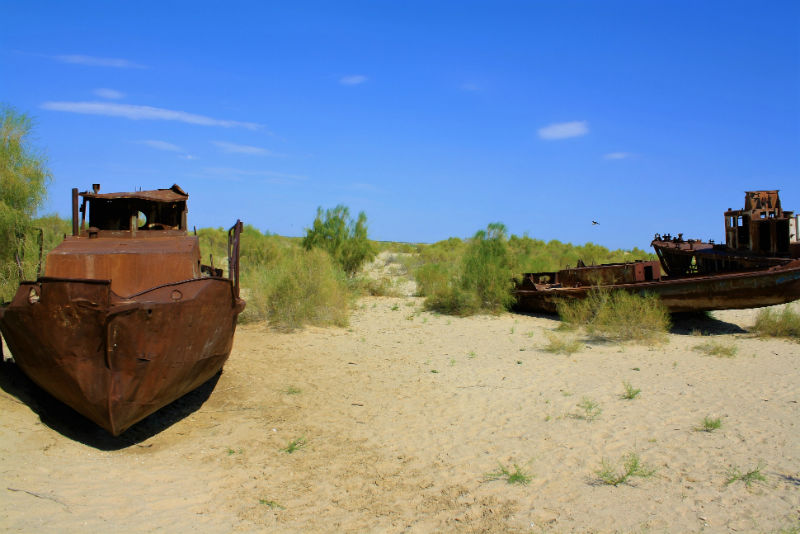 The Rusting Ships of the Aral Sea

Sadly, the town was in disrepair. A few old cars trawled the streets and a large fishing boat stood in the centre as a downcast memorial to the past.

The rusting ships of the Aral Sea laid to rest in Moynaq Uzbekistan.

On the edge of Moynaq is a pointed concrete block which is directed towards where the Aral Sea once was. This was where the water once rose to, and below is a sheer drop, where the basin has been exposed and the sand has collected. 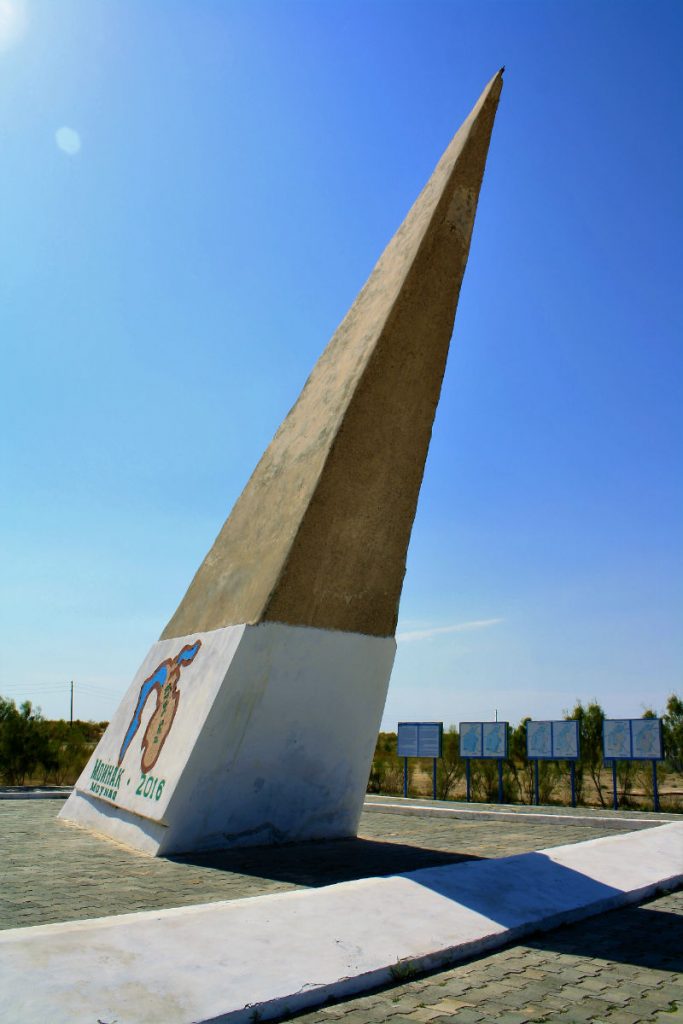 From the top of the cliff the monument is built upon, all I could see was endless desert. Just dust, sand and the odd green bush, or brown tree which has formed a layer of scrub across the sands. 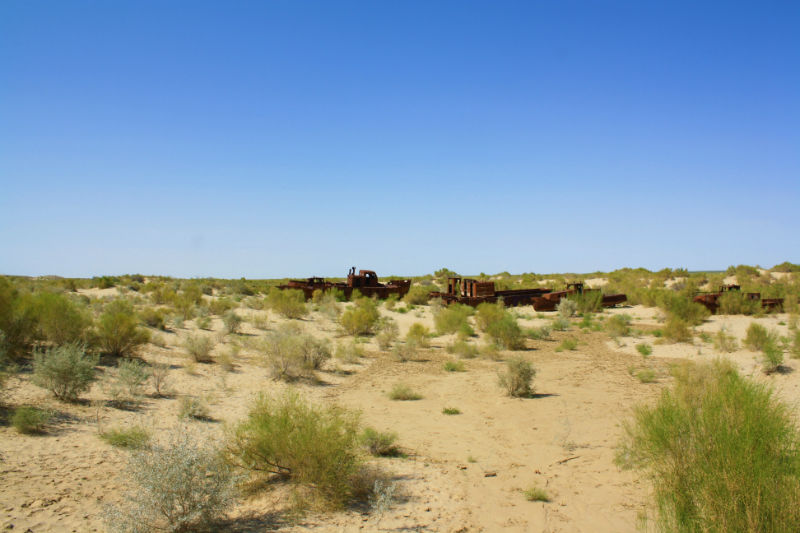 Below the cliffs are the ships. What remains of them. Rusting hulks of trawlers just lying in the sands, and reflecting the harsh sun back towards me. These solitary ships are the remnants of a vast fishing fleet. The rest have been broken up, sold for scrap or salvaged for materials. 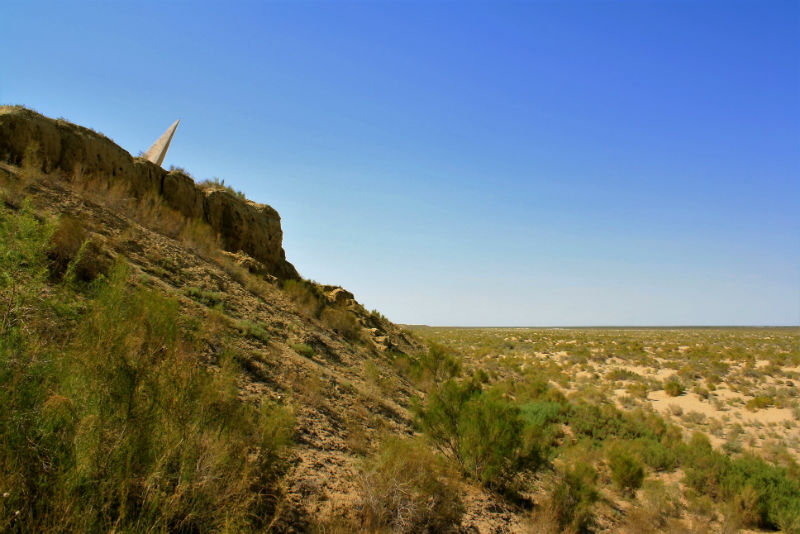 Its an arid place, a sad place. It’s a harsh picture of the damage that humans can cause to the environment, and the effect that can have on the communities that rely on it for their livelihood. 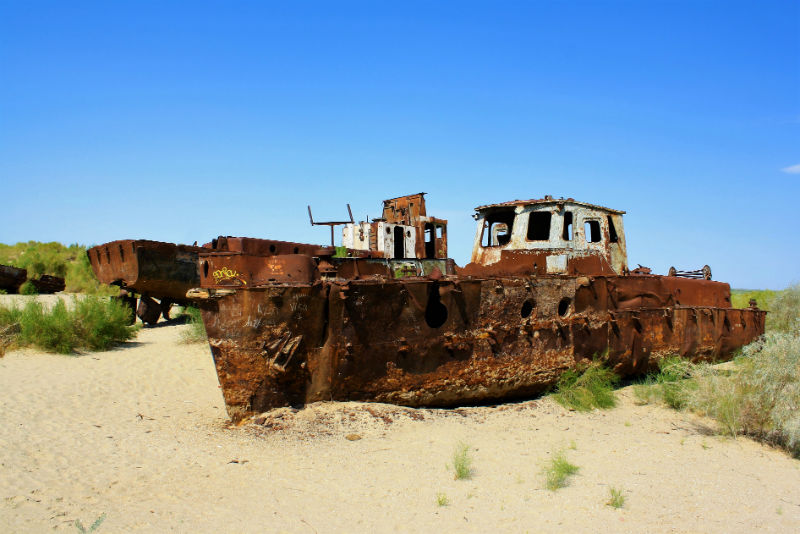 Leaving Moynaq proved troublesome. One bus ran a day to Nukus, the city further east, the capital of Karakalpakstan and my next destination. People at the bus station seemed to question why I was here. Was I intruding on their sorrow, on the tragedy that had befallen Moynaq? Perhaps. I wouldn’t be here otherwise. But equally I wanted to see what had been done, to write and take pictures so that people outside of the town can maybe see the extent of the disaster. 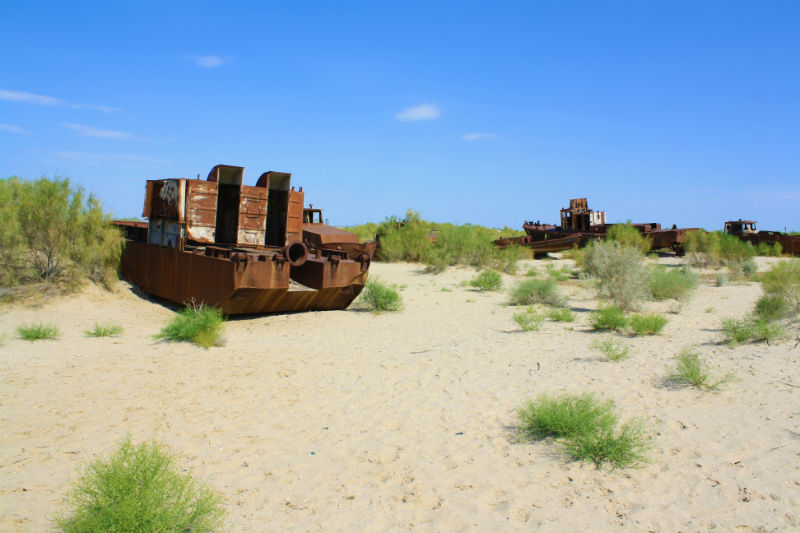 Eventually a shared taxi pulled up, heading to Nukus. There was a goat in the backseat and some lovely old ladies shared their Coca Cola with me on the bumpy road out of the old fishing town of Moynaq. 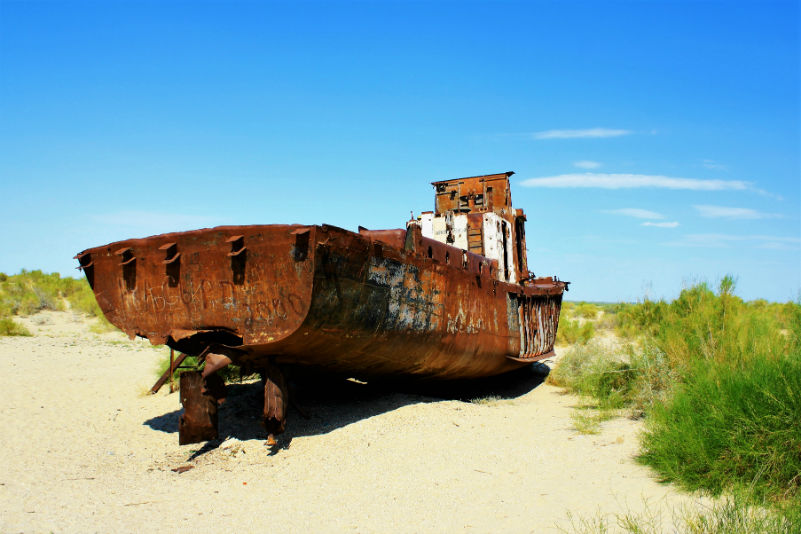 How To Travel To Moynaq

Moynaq is in the extreme west of Uzbekistan. It’s not easy to reach, and as of July 2016 there were no remaining hotels there. The easiest but most expensive route is to hire a taxi driver from the town of Nukus, the capital of Karakalpakstan. A day trip will be at least 100 USD for a car, but it does give you more freedom to explore. I travelled via shared taxi from Kungrad, which cost 25,000 Uzbek Som (4 USD) and then travelled to Nukus via shared taxi which cost 30,000 Uzbek Som (5 USD). The shared taxis leave irregularly. It’s best to go early to make sure you can find transport back. A bus from Moynaq to Nukus leaves around 3pm.