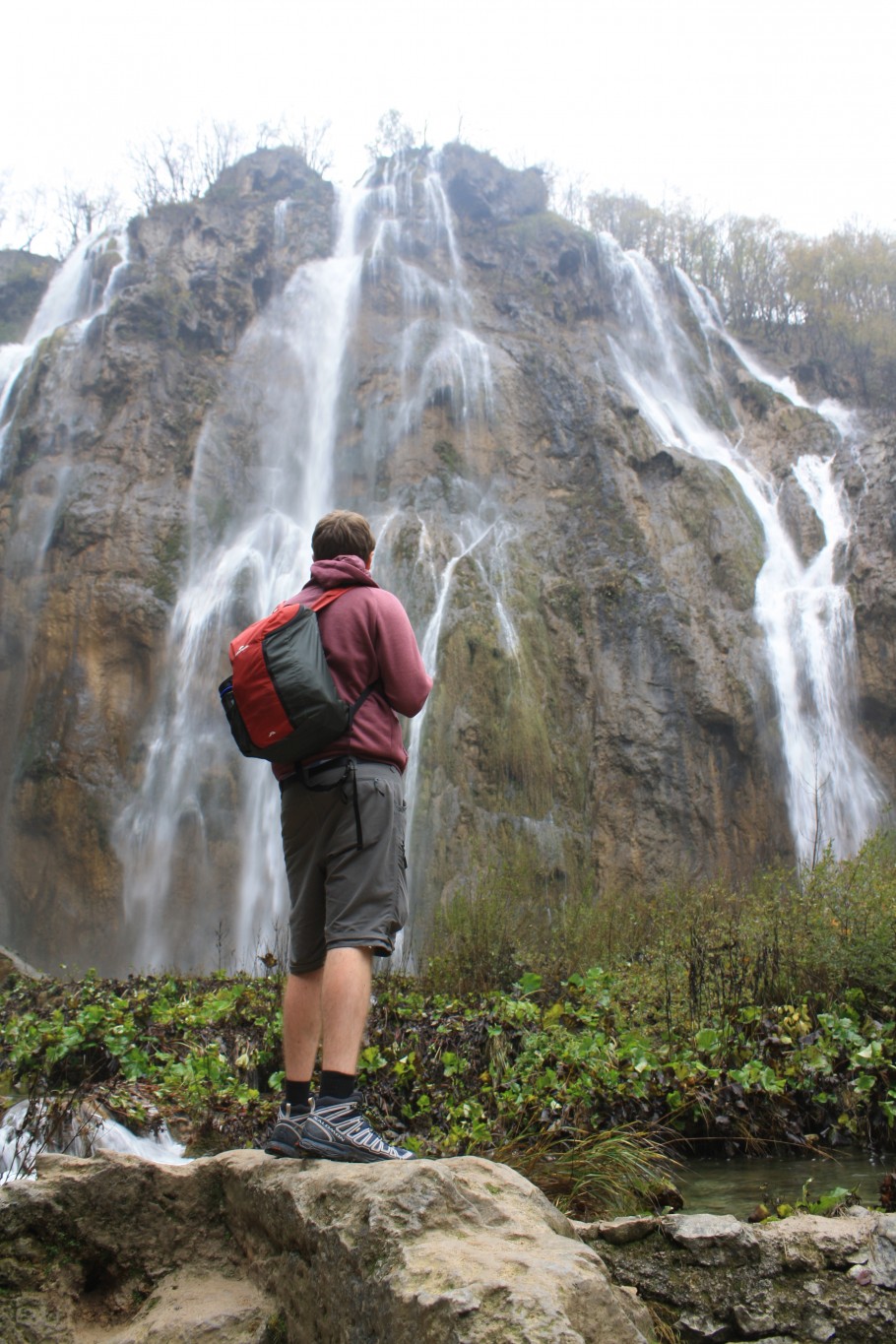 I love a good lake and Plitvice National Park in  Croatia is home to a staggering array of lakes.

It’s a popular place to visit though, and in summer the crowds can be so fearsome you’re in danger of being forced into the water by the sheer numbers pushing their way around. I decided to pay the lakes a visit in Autumn, and found minimal crowds and glorious beauty. 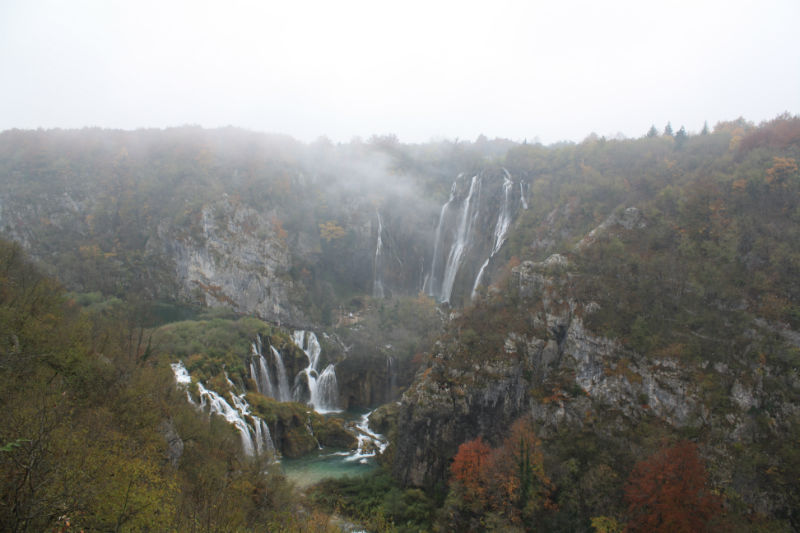 Plitvice Lakes are part of a protected national park. The Croatian’s want to keep this beautiful area as incredible as possible for as long as possible. 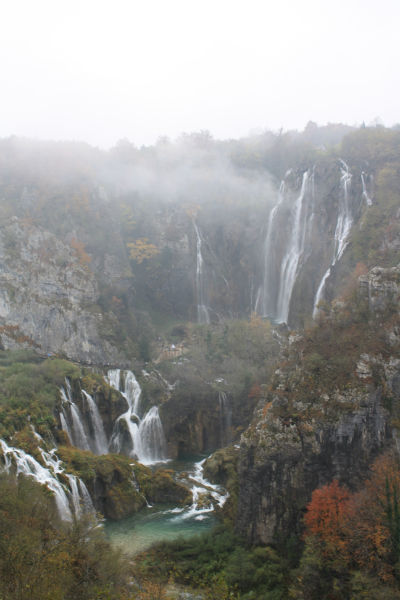 The lakes are layered and interconnected, and water drops from plateau to plateau across the park, culminating in the Big Slap Waterfall which you can see in the picture directly above and directly below- ‘Veliki Slap‘ is Croatian for Big Waterfall you see. 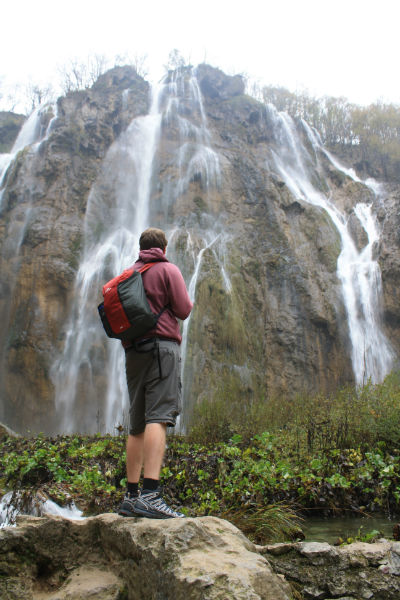 The water is crystal clear too, with vivid shades of turquoise, green and blue. The lakes are home to thousands of trout, who swim around carefree. Fishing is prohibited, as is, unfortunately, swimming. 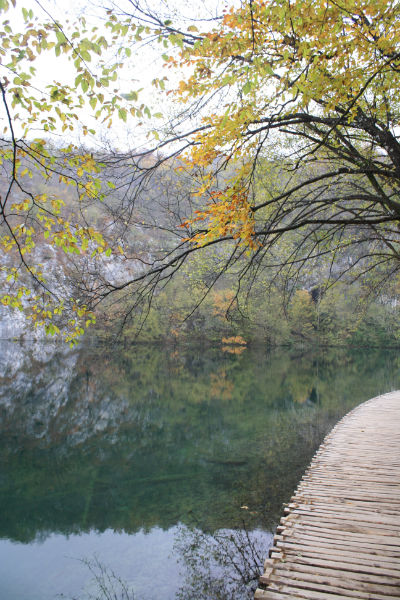 The lakes are linked with a series of rustic, wooden walkboards which will take you along the edge of the water and right under the waterfalls too. 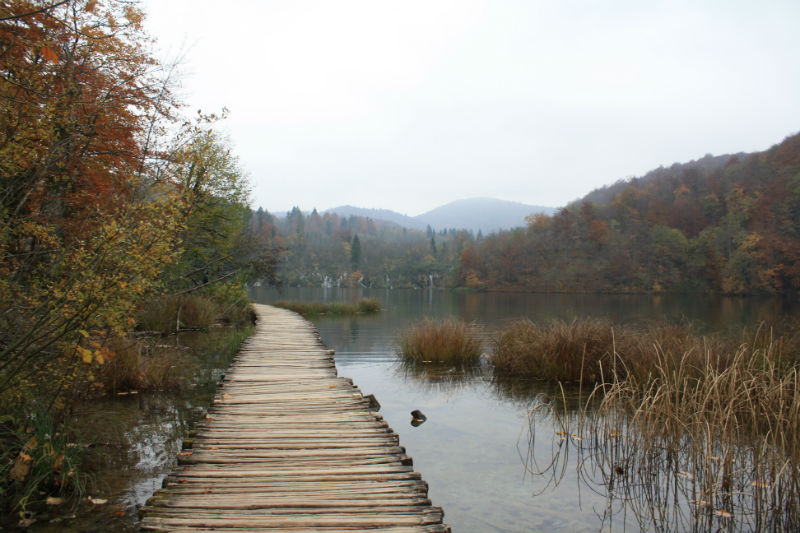 Even in low season the narrow planks were crammed with people, especially when the odd tour group came charging through mercilessly. Pausing for a selfie is a real hazard in these conditions. It’s hard to calculate the staggering numbers lost in the waters as wild tour groups wreak havoc on the walkways in peak season. 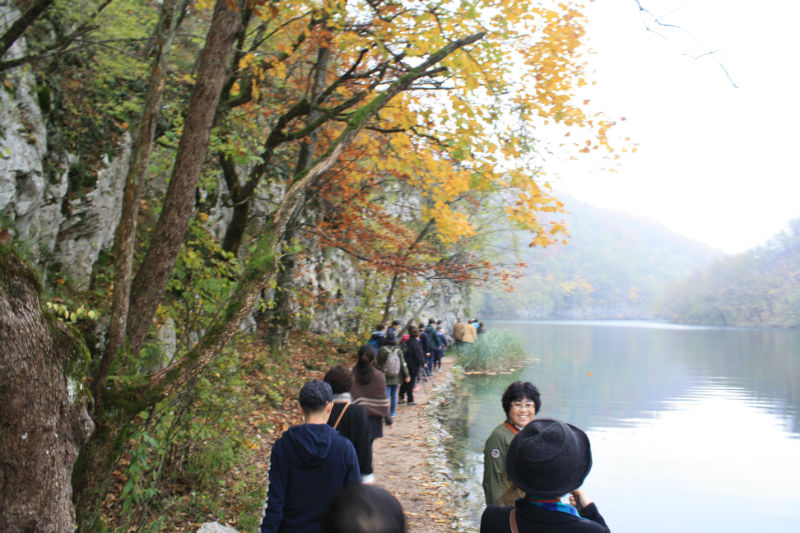 Autumn was in full swing around the lakes. Leaves were dropping and trees were browning. If I was a more poetic writer I’d probably write a beautiful verse here  about the glorious colours. But I’m not. 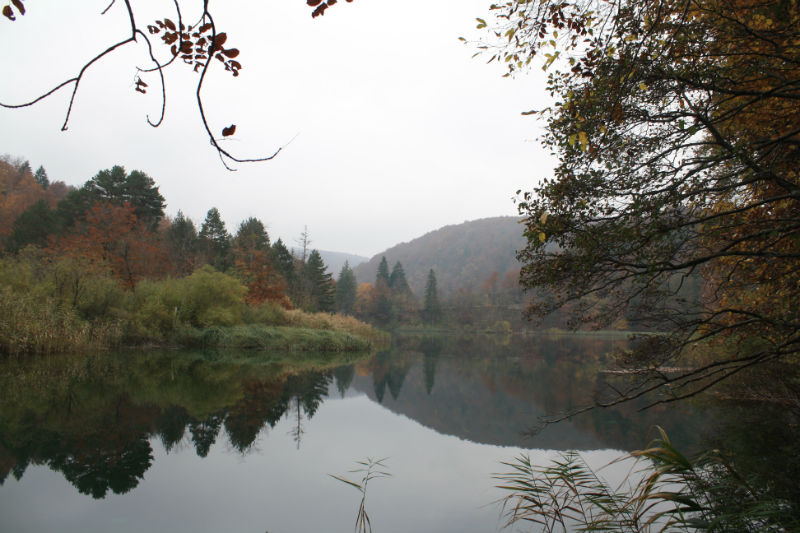 After avoiding near death on the wooden planks, I caught the boat across the larger lake, to really immerse myself in the Autumn colours. 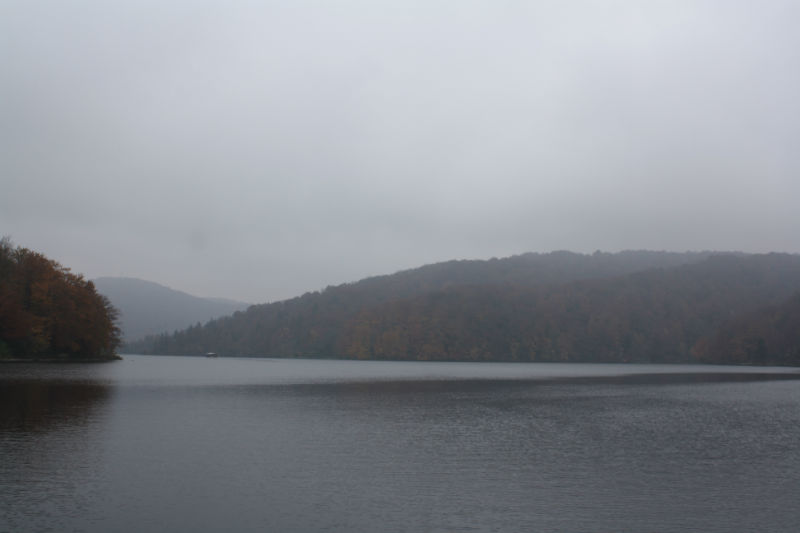 And I found some more waterfalls. Not quite as large as the Big Slap, but size isn’t everything. 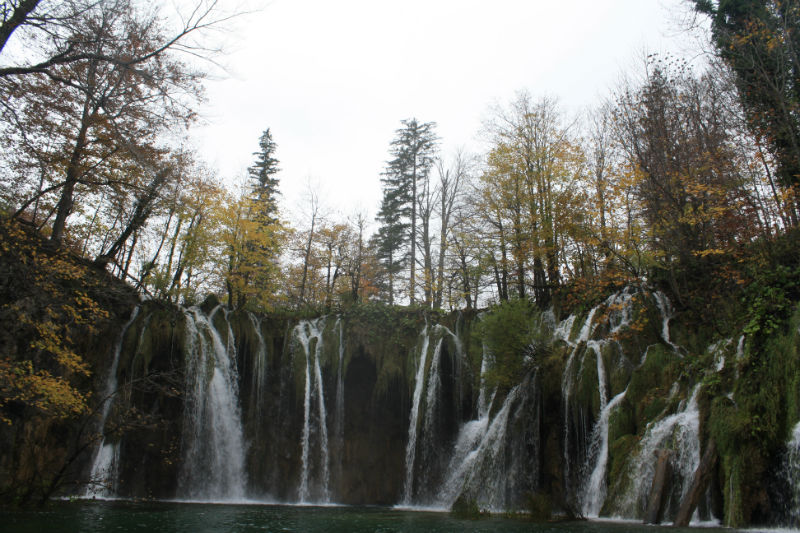 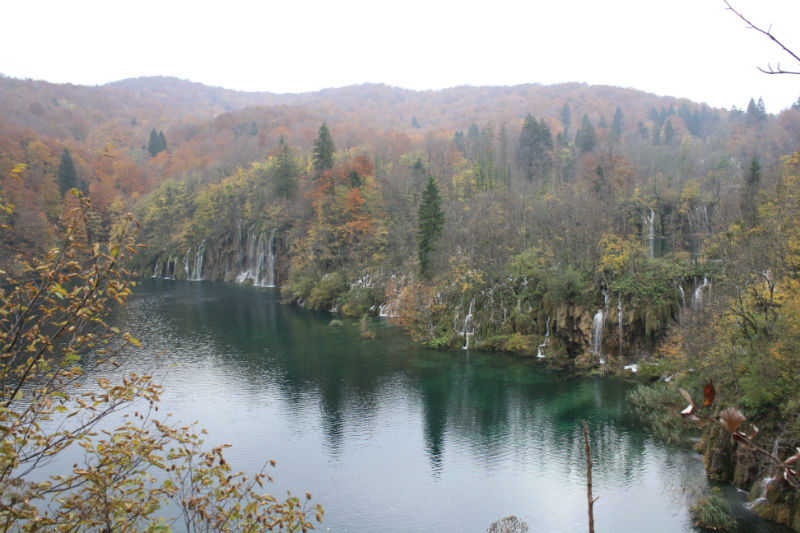 And more tour groups…all resplendent in the Autumn climate. 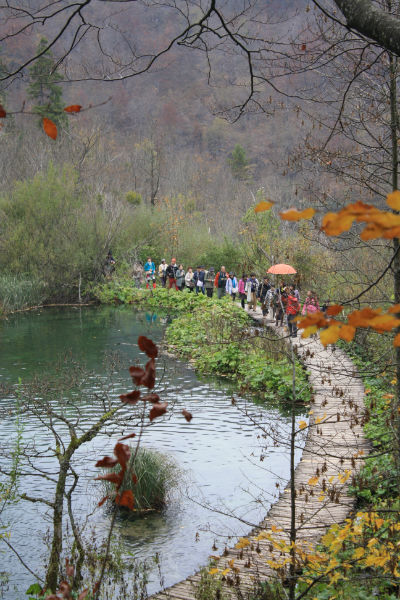 But the national park is much more than just lakes. There’s almost 300 square kilometres of woodland, full of all manner of wildlife, including rare species such as the Brown Bear, Lynx and Wolf. I was hoping they might savage a few tour groups on the water’s edge, but even these mighty beasts of the wild were terrified enough to stay far away. The woodland is full of hiking trails as well, and I set off to climb a nearby peak. 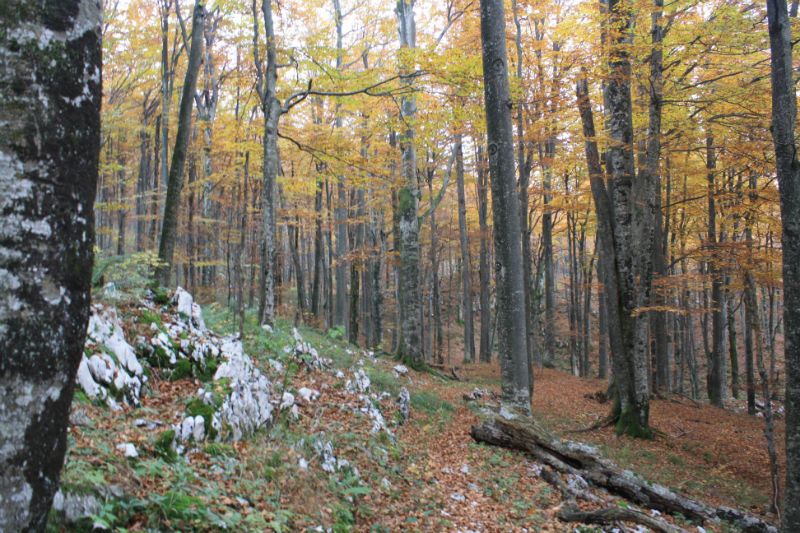 The trails are all clearly marked, the only thing you need to worry about is bears. Although these stay far away from civilization and they are few and far between. 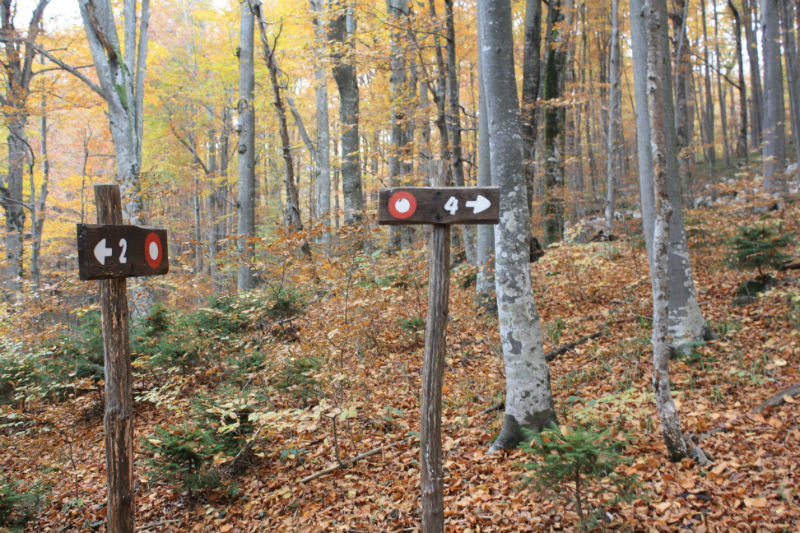 Everyone else in the park was probably too scared to leave the safety of the lakes. There was no one in sight for the trek up to the peak of Turcic, itself only a mile or so from the waterfalls. 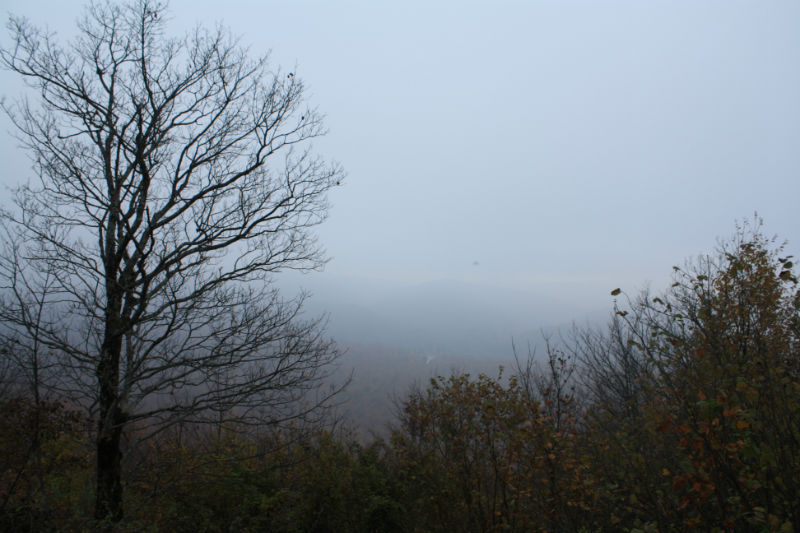 It was an equally magnificent scene. 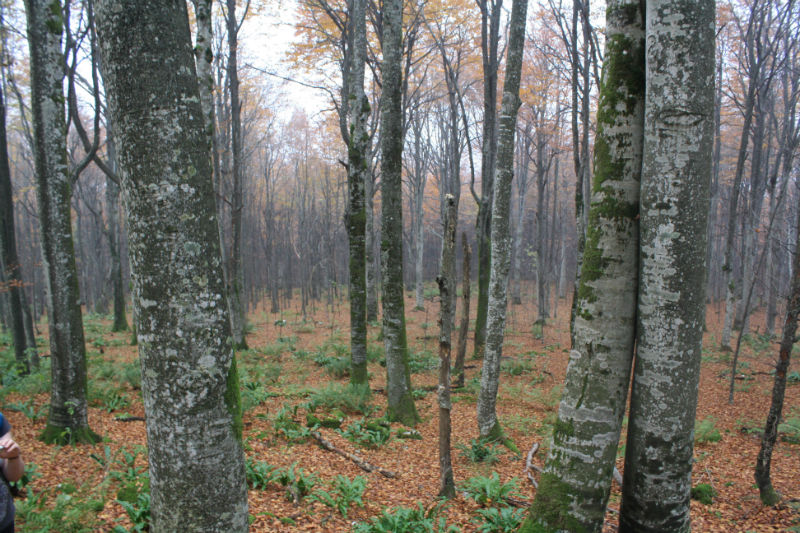 If you love a good lake as much as me then why not check out Slovenia’s Lake Bled in Winter.

You can easily do Plitvice in a day from Zagreb, or from the nearer coastline at Zadar. It’s around 2 hours by bus from either, and buses run all day. There’s a handy timetable right here.

Accommodation in the park is expensive if you are on a budget, but if you do want more time to get off the beaten walkboards and explore the miles of woodland and mountain tops that surround the lakes, then you can camp out at Camp Korana, just a few miles down the road from the lakes and in the heart of the National Park. Just watch out for bears.