Crucifixion in the Philippines 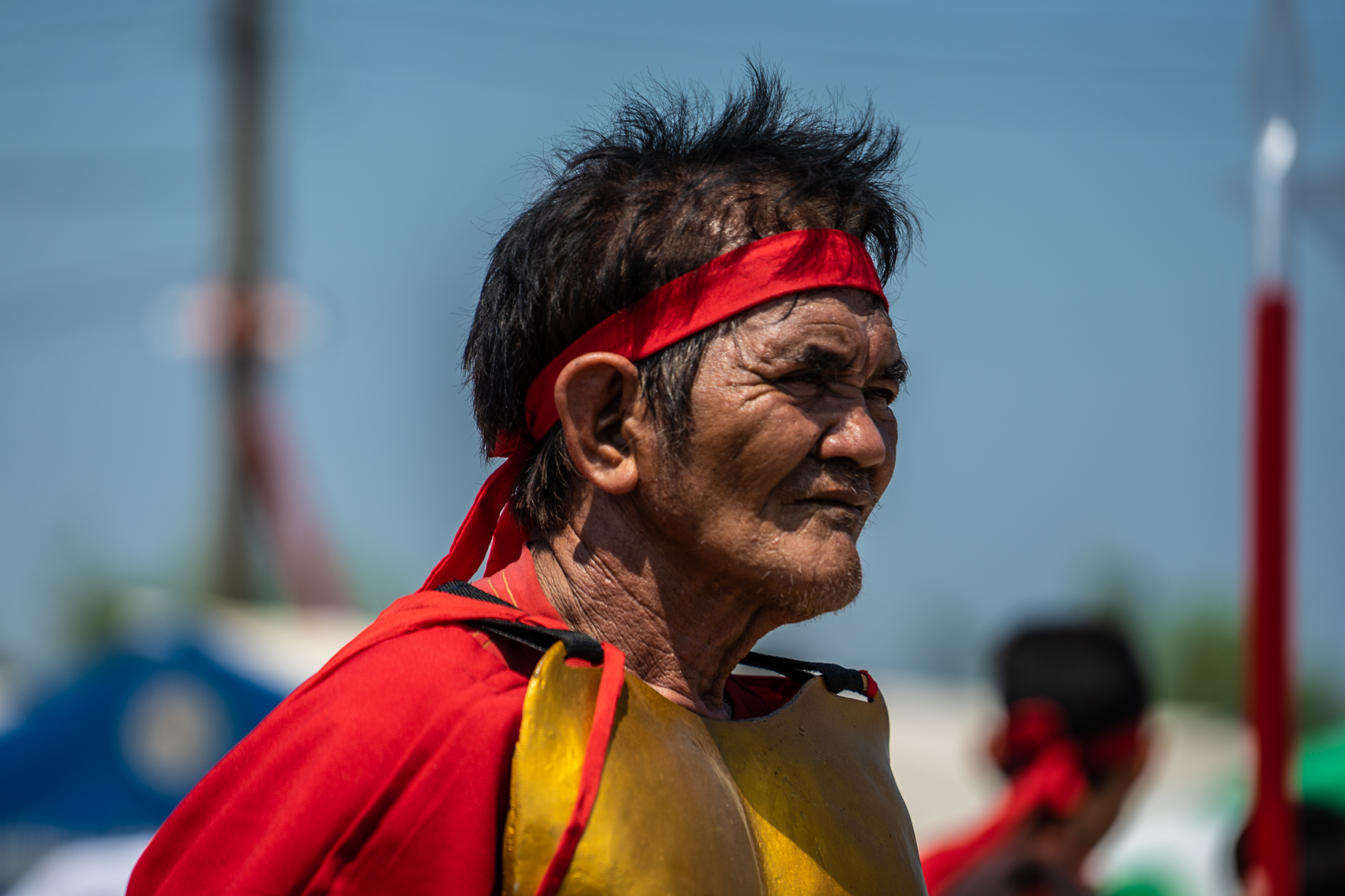 Ruben Enaje hardly even flinched as the nails were driven into the palms of his hands before he was raised high on a heavy wooden cross under the beating Good Friday sun in the Philippines.

This was his 33rd crucifixion, and now he says, he longer feels the pain. Like countless other Filipinos, on Good Friday each year, he chooses to be crucified, as a testament to his devotion to Catholicism.

It’s a traumatic experience, but one that those who are crucified believe brings them closer to God or is an act that can wipe away their sins. It’s a brutal demonstration of faith, but one that draws in huge crowds who gasp in awe or horror at the spectacle that takes place in the otherwise quiet town of San Pedro Cutud in the Philippines.

Flagellation in the Streets of San Pedro Cutud

It was 7 am, and after driving north through to the streets of Manila and into Pampanga in the early hours of the morning, I’d arrived in the barangay of San Pedro Cutud. The sun had barely been up in the sky for an hour, but in the height of the Filipino summer, temperatures were already soaring.

Along the main road in San Pedro Cutud, people were already beginning their Easter celebrations on Good Friday. Here though, there was no chocolate and there were no Easter eggs to be seen anywhere.

Rather, a line of locals was walking slowly through the street as they beat their own backs raw with coarse whips and sharp pieces of bamboo. Many were clad in hoods to cover their faces, while all were dripping with blood.

This was the first procession of flagellants beating themselves in penitence that I would see that day. Before the crucifixion began, hundreds would have walked through the street to the three crosses placed atop a hill in San Pedro Cutud, beating themselves to absolve sin or to demonstrate their faith.

While only a select few are physically crucified on the crosses, many more would still be left bloody and reeling. By 9 am, I was already splattered in blood from passing flagellants, and the day’s events were only just beginning.

“The crucifixion is actually frowned upon by the Catholic Church in the Philippines”, my guide Bing told me as we walked past yet another line of flagellants whipping themselves, and stopping every few metres to shoulder the burden of a heavy wooden cross that was being dragged in turns along the street.

“The church doesn’t want people hurting themselves in their name”, Bing continued. “But it doesn’t stop people. This is now the biggest crucifixion event in the Philippines”.

Every year on Good Friday, thousands gather in this small town in Pampanga Province to see a reenactment of the Passion of the Christ. In full period costume, Roman legionaries march a cross-carrying Jesus-figure through San Pedro Cutud, in a dramatic play which culminates in a real-life crucifixion.

Known as the Cutud Lenten Rites, the grizzly amateur performance is played out in front of huge crowds, and broadcast on local television. After the first crucifixion, many more worshippers are also raised onto the crosses. With nails driven through their palms, they hang in the fierce sun for several minutes before they are brought down and rushed over to a medical tent.

Although it might be criticised by the church, Bing tells me that the government take a more practical stance. “Every year the Ministry of Health issues guidance on how to have a ‘safe’ crucifixion”, she says. “No rusty nails is the main guideline!”

The Passion of the Christ

The flagellation takes place as the stage is prepared for the Passion. Once the crowds are settled, and the devotees have prostrated themselves before the crosses, the performance itself begins.

Horses kicked up blood-stained dust as Roman cavalry galloped onto the mound to loud cheers. A gold plated centurion followed in a life-size chariot to more applause, before the sound of wailing rose over the loud speaker.

The macabre stage was set for the entrance of Ruben Enaje, a 58-year-old who has been crucified every year for three decades. The actors weren’t holding back, and Ruben, in his role as Jesus was pushed violently to the ground by the legionaries in red cloaks that surrounded him.

He struggled to the top of the mound, where more Roman soldiers were preparing the wooden crosses for the crucifixion

This is not an event for the faint of heart, but the almost Disney-like performance of the characters in this enthralling open-air theatre production would have you convinced that it was just acting.

Ruben Enaje, a veteran of crucifixion, was raised onto the cross with barely a sound uttering from him. He claims to feel little pain now, having been crucified so many times, but the unmistakable sound of nails being hammered home into flesh and wood was still difficult to ignore.

Alongside him, two other devotees were raised on crosses too, but without the nails. In his flowing white outfit, Ruben looked messianic, and the crowd reacted to the brutal spectacle, some cheering, others wailing but all weirdly transfixed by the scene.

The crucified were taken down after five minutes in the sun, and waiting stretcher bearers rushed over to treat Ruben’s wounds.

The Passion was over, but four more people would be crucified in the same way, nails driven through their palms, to test their faith and their resolve, as the sun beat mercilessly upon them.

It’s a unique sight to see, one that will either hold your gaze or have you turning away in bewilderment, but for those who are crucified, it’s a life-changing moment, despite the dangers, the shock and the apparent brutality of this local tradition that attracts thousands of spectators from across the world each year.

How to Visit the Easter Crucifixion in the Philippines

Visiting the Philippines Crucifixion isn’t for everyone. It’s a strange spectacle. It’s both brutal, while at the same time, almost country-show like in terms of atmosphere. Families, tourists, film crews and photographers gather in a field in San Pedro Cutud to watch, bringing along picnics or buy fast food and drinks from the vendors that set up shop for a roaring day’s trade.

It’s a long day in the sun, and you’re best getting here early to see things unfold from the beginning. I arrived at 7 am, after a two hour drive from Manilla. The actual Crucifixion itself doesn’t begin until around midday, but the schedule is flexible.

Anyone can show up, and there is an area reserved for spectators which is free of charge to enter but just be warned that it gets crowded. There are also VIP and Press areas. If you want to join the VIP section, I’d suggest booking on with a company like Young Pioneer Tours who run a day tour here from Manilla and can arrange press passes and VIP tickets. They also arrange your transport to and from Manilla, making life easier on what is a hectic day.

If you are travelling independently, then you’ll need to take a bus north from Manilla to the City of San Fernando in Pampanga. From here, you’ll be able to find a tricycle driver to take you out to San Pedro Cutud, the actual Barangay where the event takes place.

The event is held on Good Friday every year.

Disclaimer: I travelled with Young Pioneer Tours and mentioned them in this post, but all costs were covered by myself independently.