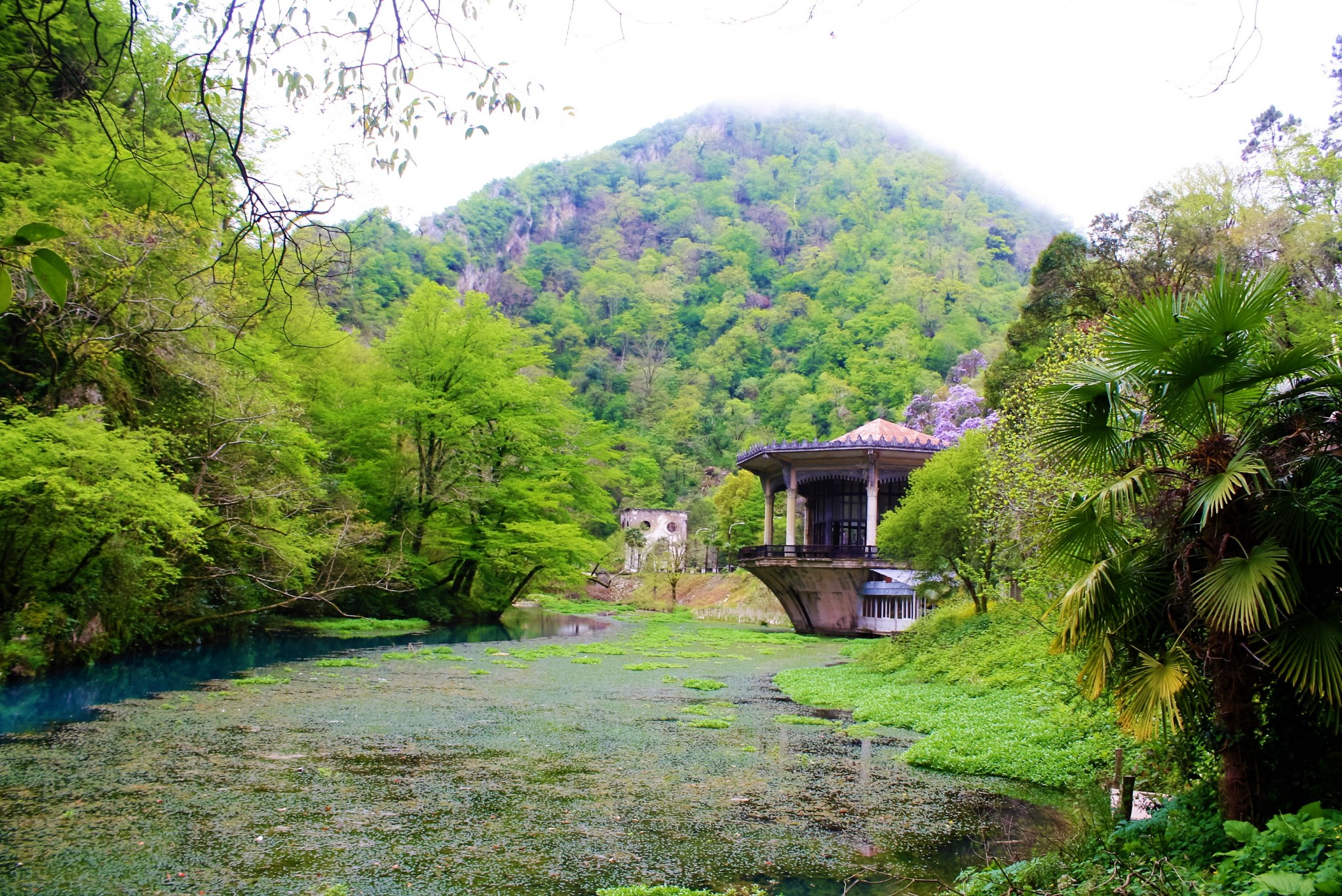 I was unceremoniously dumped off the bus by the harsh Abkhazian bus conductor on the edge of Novy Afon.

He didn’t take too kindly to my severe lack of Russian language skills- the lingua franca of the region- when I asked if this was the stop. “Novy Afon?” I asked, to which he violently halted the bus, opened the doors and threw me off. It wasn’t quite the town, but it was close enough. 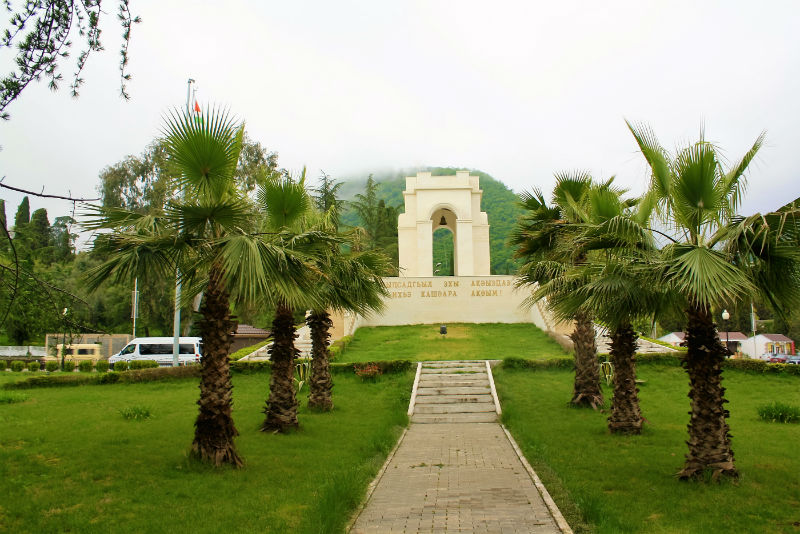 Up ahead tour busses were pulling into the parking lot. I didn’t expect many other travellers to be here. But then again, I hadn’t factored in the Russians. It was time to be a Russian tourist for the day. It was time for my very Soviet holiday to begin.

Novy Afon- or New Athos to those of you not familiar with Russian- should be on the top list for any traveller to the Black Sea. But it’s not- unless you live in Sochi- because Novy Afon is a place that doesn’t factor into many Western holiday itineraries. 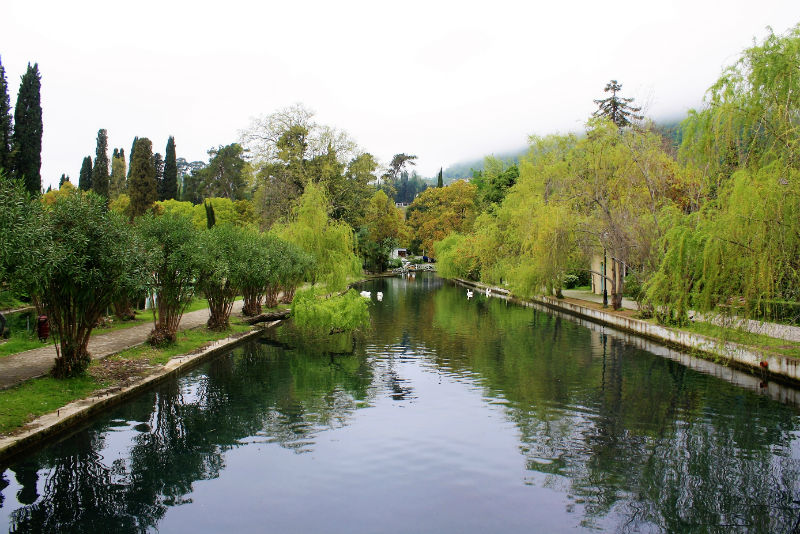 The small town lies a short bus ride along a mountain pass from the city of Sukhumi, the de facto capital of the breakaway Republic of Abkhazia. This self declared independent ‘nation’ goes unrecognised by most countries- except by the Russians. The vast majority of the international community considers the territory to be Georgian, and after the break up of the Soviet Union, bitter ethnic conflict left Abkhazia isolated, but nominally independent. The unresolved conflict and ensuing isolation is the primary reason why it’s only Russian holiday makers that really visit, and to Novy Afon, it appeared that they were descending in droves.

The town is small, but it has a long history. The Greeks settled here in their heyday of colonisation centuries ago, before Georgians and Abkhazians moved in later. The current town though, and its defining monastery, were built by Orthodox Monks from Athos in Greece, after being invited to settle here by the Russian Tsar in 1874. They built the extravagant monastery, and named their new home Novy Afon. The monks found themselves persecuted by the Soviet government in later years, and the monastery itself would be closed for decades, but now that communism in Abkhazia has ended, Novy Afon and its monastery has become a major site for both pilgrims and tourists. 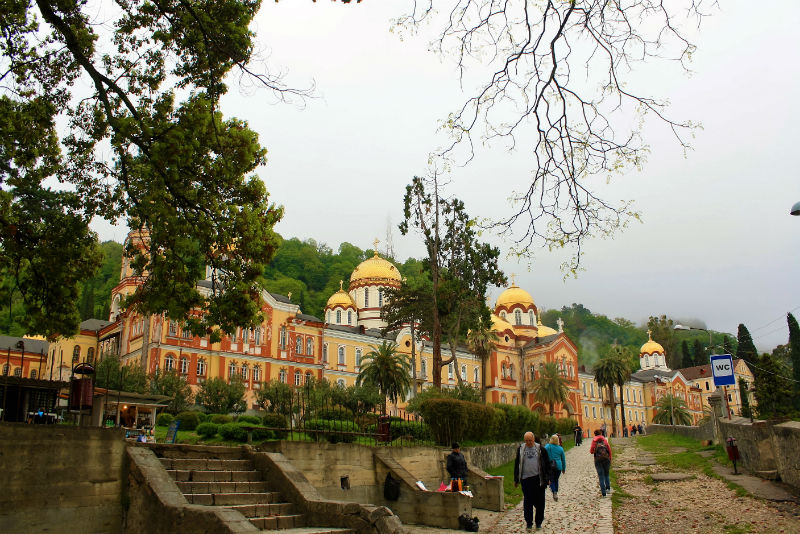 I walked up the long set of steps to the Simoneau-Kananitsky Monastery, its golden domes glittering in the damp Black Sea heat. Along the route old Babooshkas and young Abkhazians were shouting in Russian, trying to sell me anything from lemonade to Orthodox crosses and huge paintings of Jesus. The tour groups were lapping up the goods on offer, buying litres of home made Cha-Cha (a brutal local wine) and the stereotypical bottles of Russian vodka to complement the big day out. 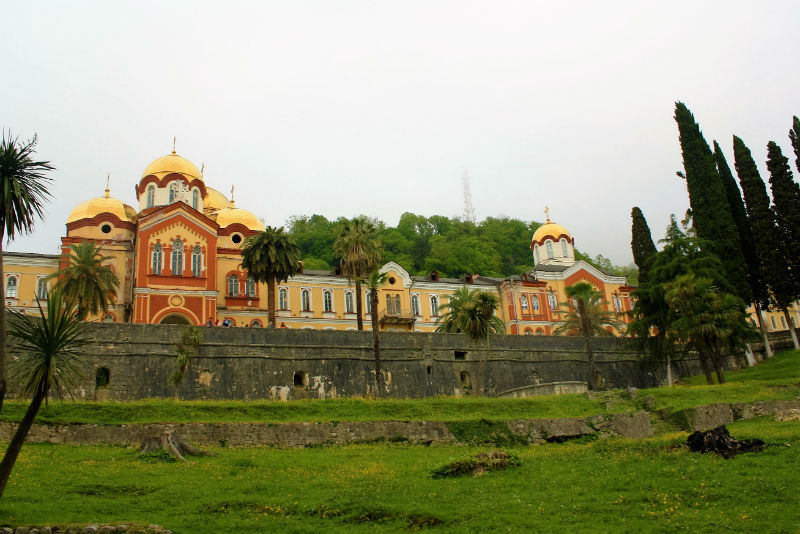 The monastery was fringed by palm trees, and there was a misty mountain backdrop, but up close, it was clear that years of Soviet neglect and a war to follow had been harsh on the building. 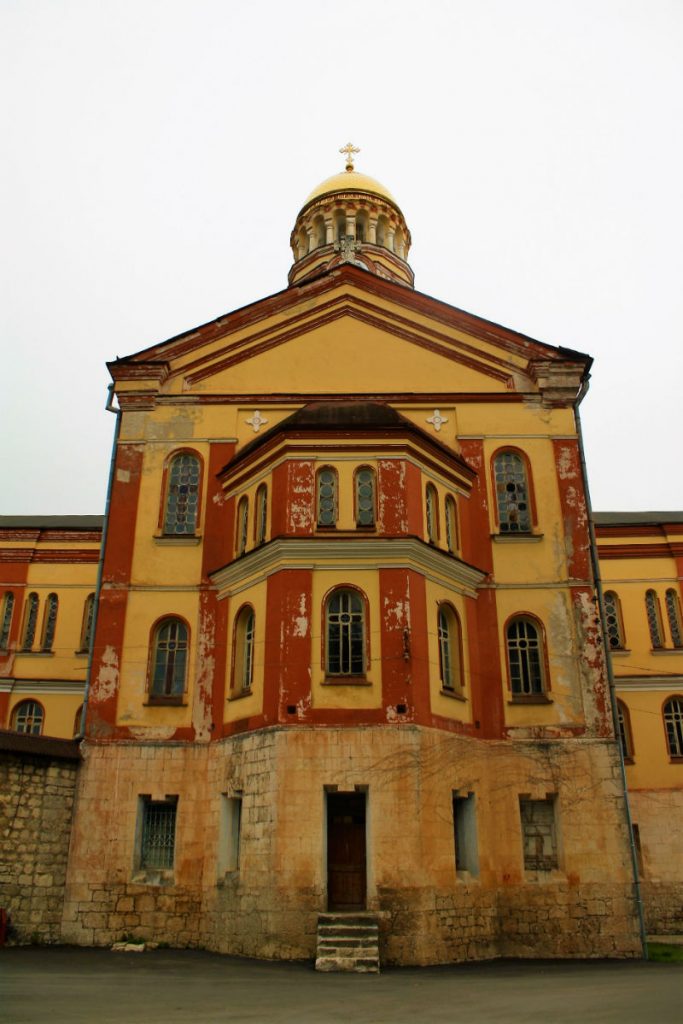 Next up on my tour itinerary were the landscaped ponds and gardens at the base of the monastery. 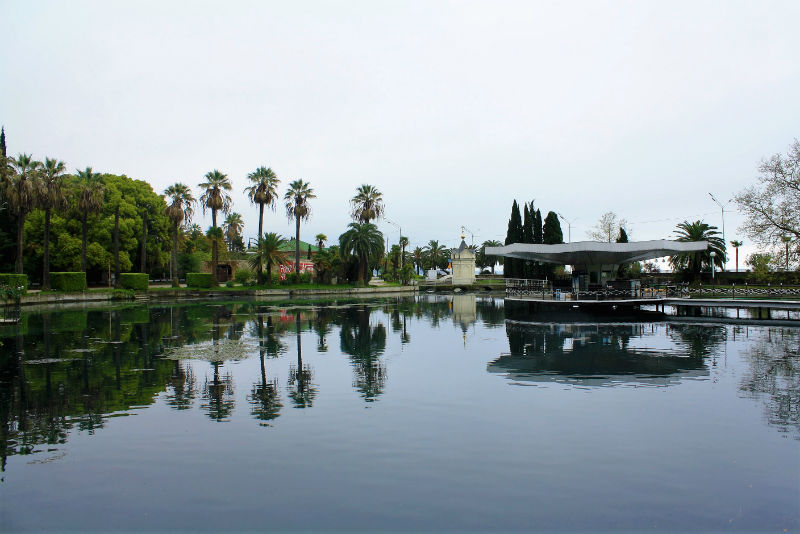 Here I found all manner of bizarre and exotic statues. 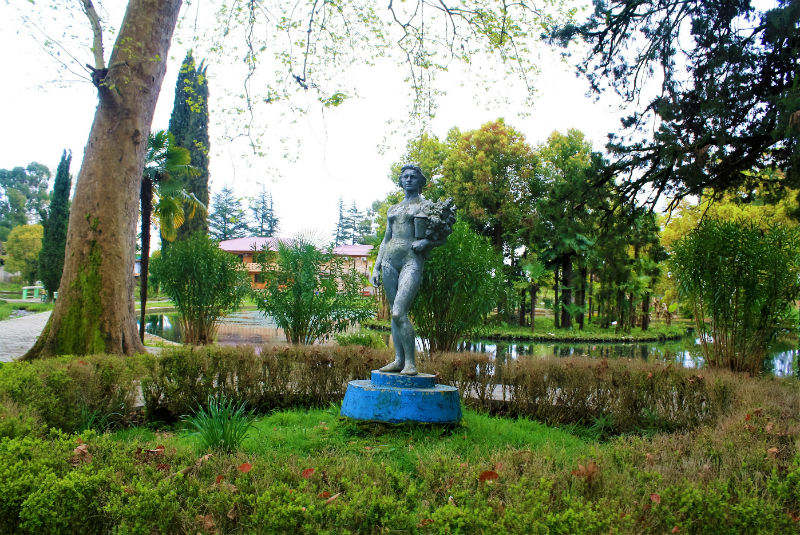 Even the odd donkey and a pack of stray but friendly dogs, fighting each other viciously for my attention. 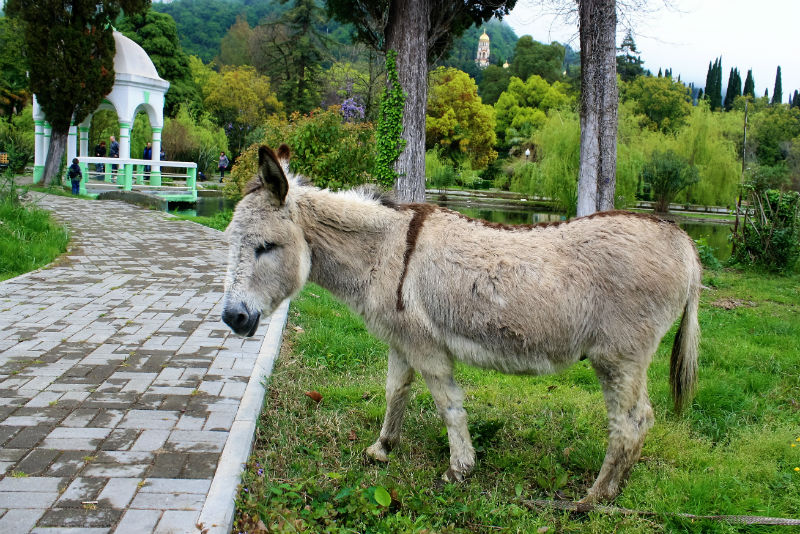 What I was really here for though, was the old Soviet railway station that I’d heard was abandoned nearby. And I’d heard it was, quite simply, spectacular. I went off through the streets, heading towards the edge of Novy Afon, towards the waterfall. 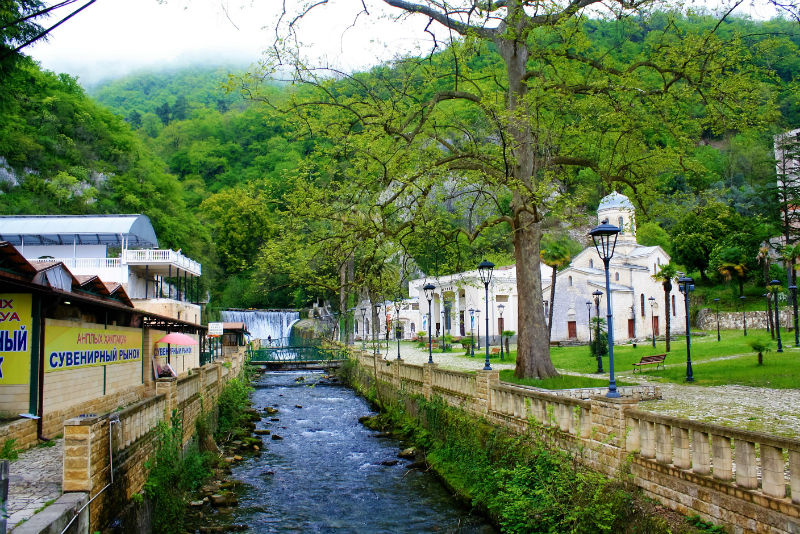 Above the waterfall, a green-blue lagoon emptied itself over the edge. There were even a few pedalos for those drunk enough on Cha-Cha to risk the aged contraptions. 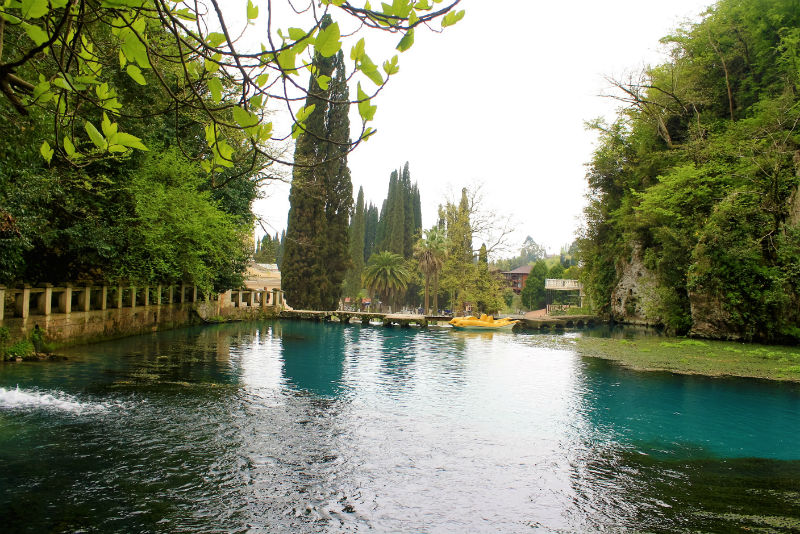 Overlooking the lake, I found what I was looking for. No Soviet day out is complete without a bit decaying, romantic abandonment, a fleeting snap shot into the former glory days of communism. 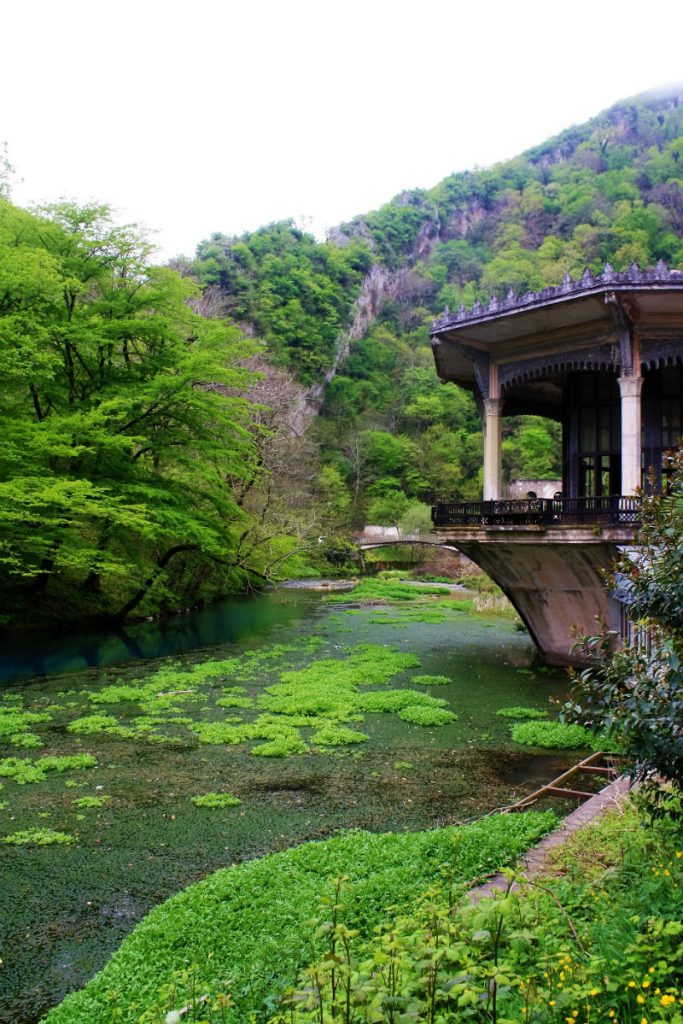 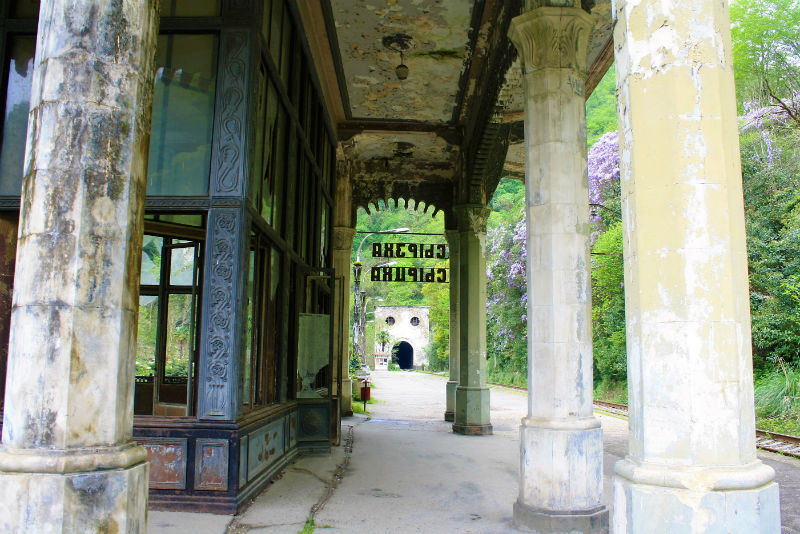 I thought the station was completely abandoned, but no, a fellow traveller assured me that he saw with his own eyes a train heading to Moscow pass by here. He didn’t say if it stopped or not though.

Basking in the glorious architecture of the Soviet Union, my big Russian tourist’s day out was almost over, I just had to find some Shashlik to eat and then wash it down with copious quantities of Cha-Cha.

Oh, and Novy Afon has one of the largest caves by volume in the entire world. There’s even a metro line running to it. But that’s a whole other blog post coming your way soon! I’ll also be dedicating an entire article to the glorious railway station, so come back soon for more tantalising Soviet pictures. 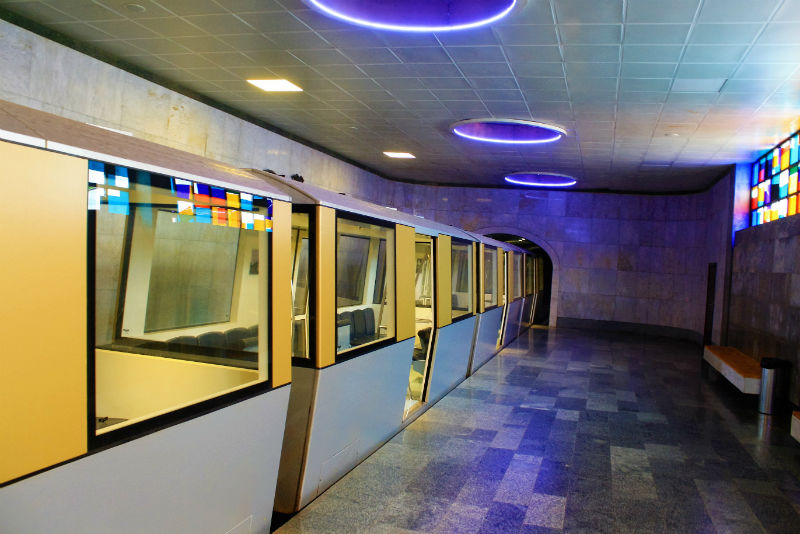 The metro to the cave will depart soon…!

How To Travel To Novy Afon!

Novy Afon is a 20 minute bus ride from Abkhazia’s capital of Sukhumi. Busses depart from the main bus station by the old railway station outside of town. A ticket- payable on the bus when you get off- cost 50 Roubles. I couldn’t figure out the exact schedule, but I didn’t wait more than 40 minutes for it to depart, so I’m guessing hourly. It will drop you off somewhere along the main road as it carries on further.

On the return, wait by the bus stop on the main road at the bottom of the town, in the direction of Sukhumi, and flag it down when it passes. There are a few hotels here too if you fancy spending the night!

The drive from Sukhumi is scenic but sombre, traversing a valley where a fierce battle was fought between Georgians and Abkhazians, and passing the many graves and memorials that now dot the road.

In Cyrillic, Novy Afon is written just like this: Новый Афон