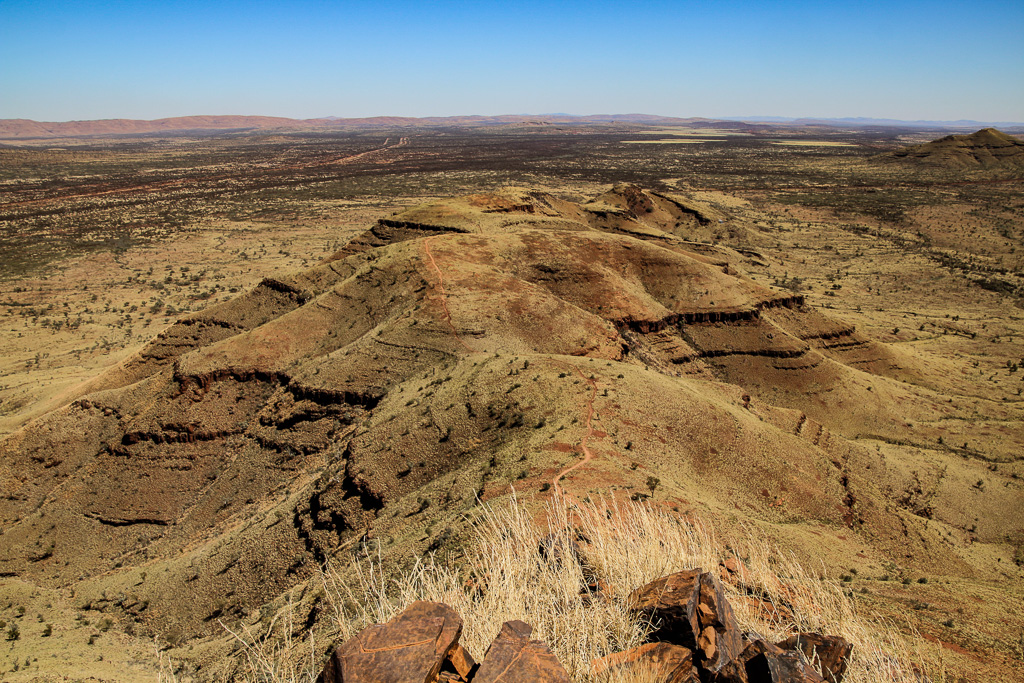 That’s not really something to brag about I can hear some of you thinking as you read this, where’s the pride in only hiking to the summit of Western Australia’s SECOND highest mountain?

I know, I know, you’re all thinking all of those questions…. But none of these questions were running through my head as I sweated and dragged my way to the summit of Mount Bruce, Western Australia’s second highest mountain, and that’s why I’m telling this story.

Climbing Mount Bruce, the second highest mountain in Western Australia is in fact quite the challenge… 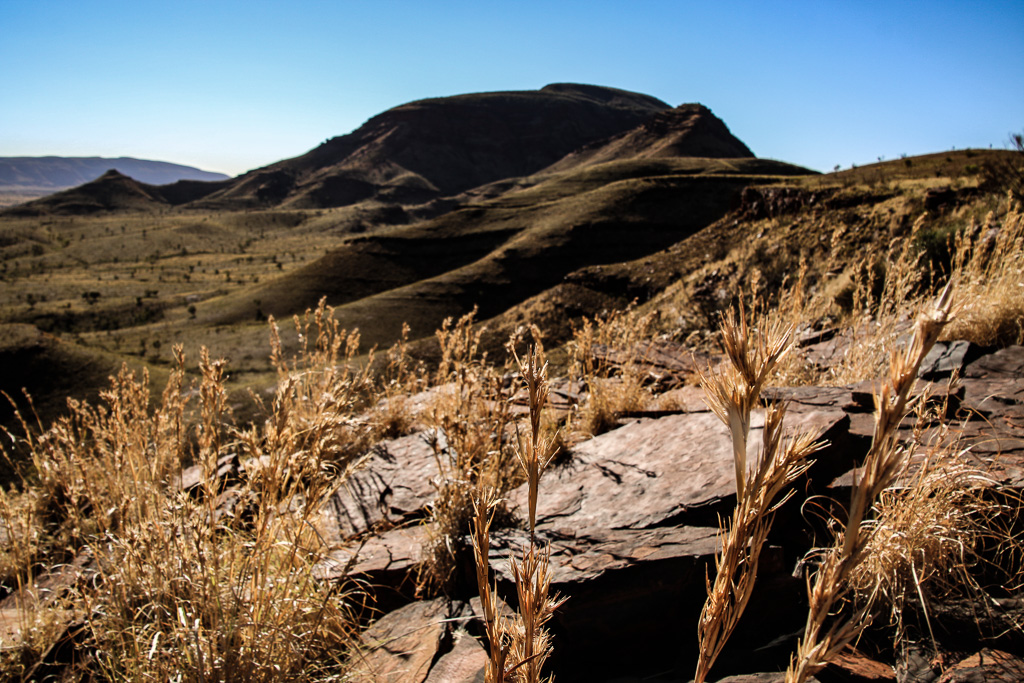 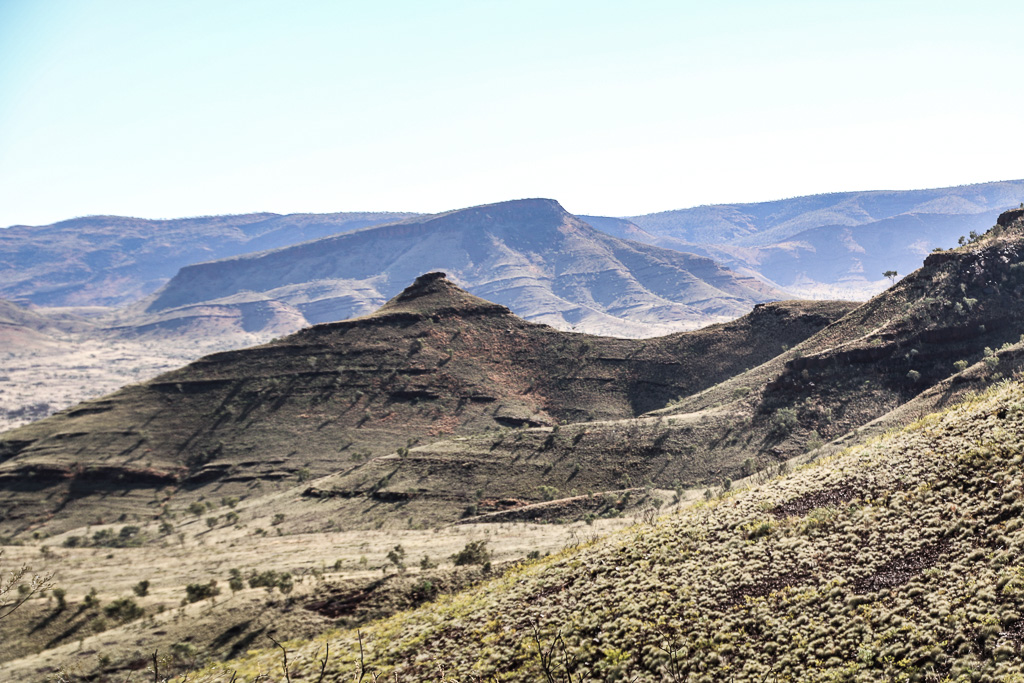 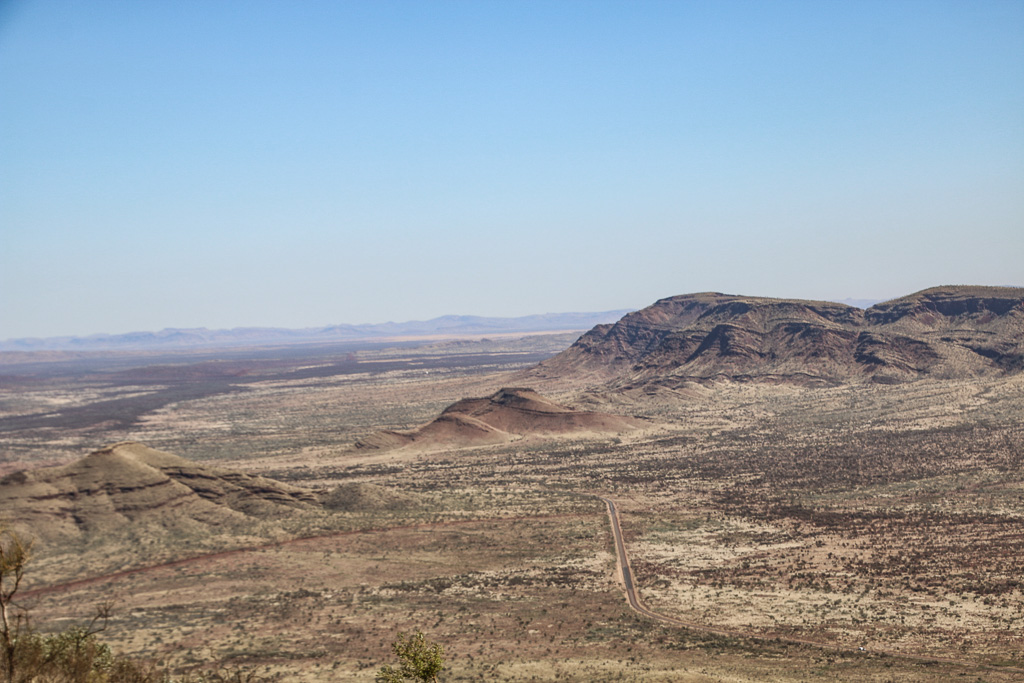 That’s no exaggeration either, people die climbing this mountain.

This is a challenging climb, even if Mount Bruce doesn’t have the  title of the highest mountain in its State. Mount Bruce is within Karijini National Park, and that’s a vast, semi arid desert of red dust, red rocks and red hot heat. This is a hot, sweaty, rocky climb to the mountain top!

WA’s highest mountain isn’t even that much higher.

Mount Meharry is the highest mountain and that’s only actually 15 metres taller than Mount Bruce.

Mount Meharry is close to Karijini, also in the semi arid desert of this outback world, but you can actually drive most of the way to the summit. The only real requisite is having a four by four to tackle the rough track and that in fact is the reason I couldn’t climb the highest mountain and could only achieve the lowly heights of summiting the second highest mountain in Western Australia.

That’s Mount Kosciuszko and that stands at 2228 metres in height. That’s almost a thousand metres higher than Mount Bruce, but that was a long way away in New South Wales, where the weather is a lot more forgiving…

My challenge in Karijini then was to summit the SECOND highest mountain in Western Australia! Even if that wasn’t a particularly catching or exhilarating title, especially for an adventure travel blog… 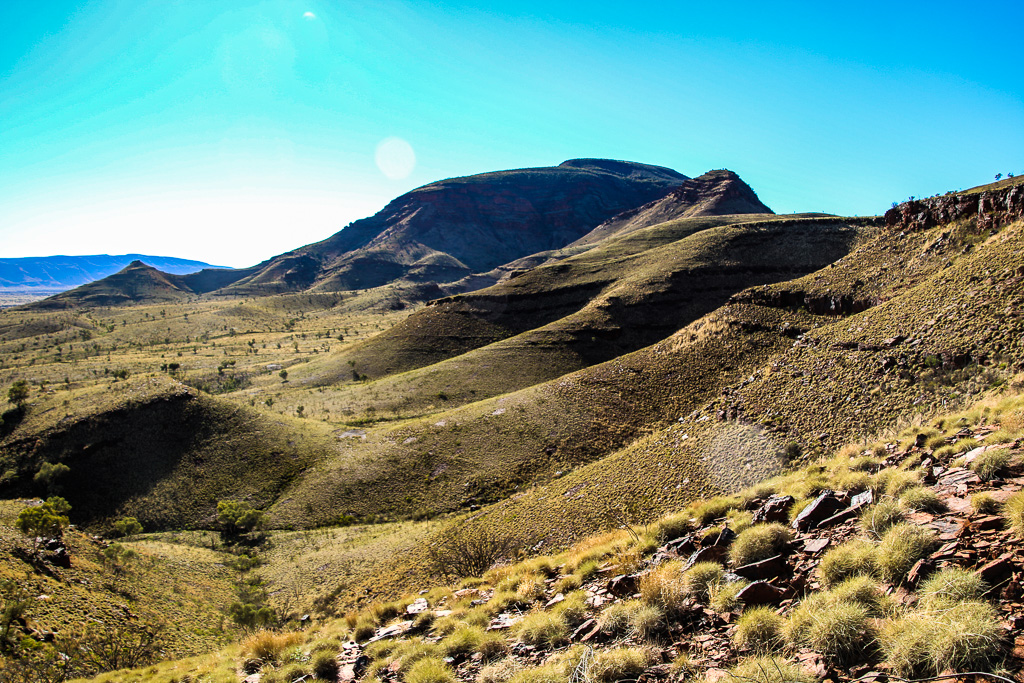 Hiking To The Summit Of Mount Bruce In Karijini National Park

I started out early, driving along the road from Karijini Eco Retreat where I was staying to the base of the mountain. As I got closer I could see its looming shape getting larger and larger ahead of me on the horizon.

The path was rocky but clear and I could see it winding slowly along the ridgeline and ever upwards to the top.

It was still quite cool in the early morning, just after the sun had risen, but still, I could feel the red dust around me warming up already. It was going to be a hot day. Just like every day in the Pilbarra. 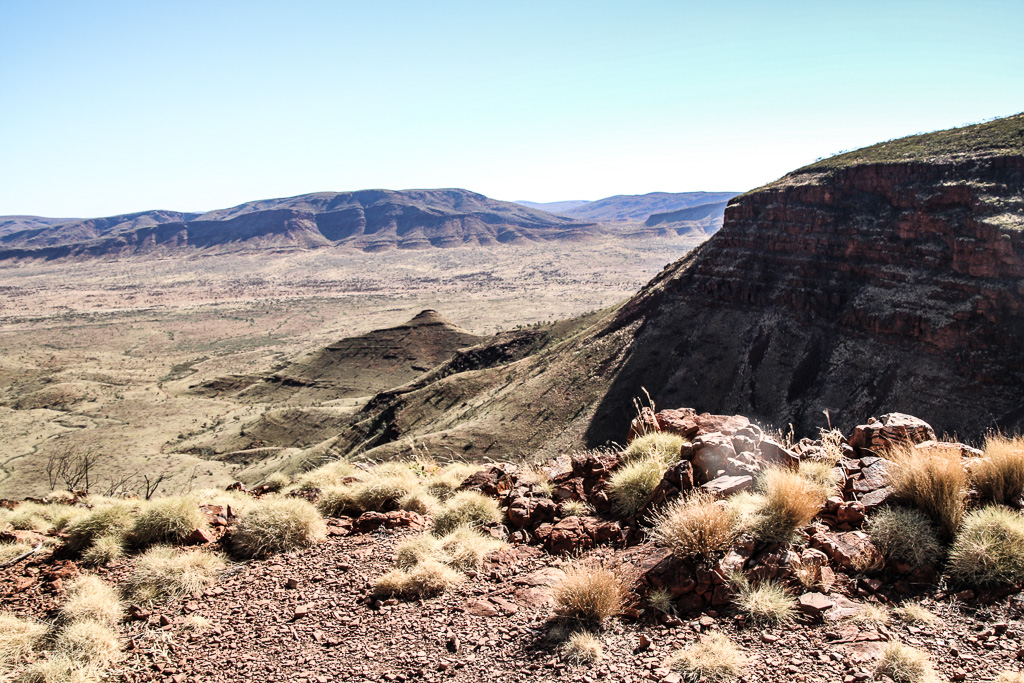 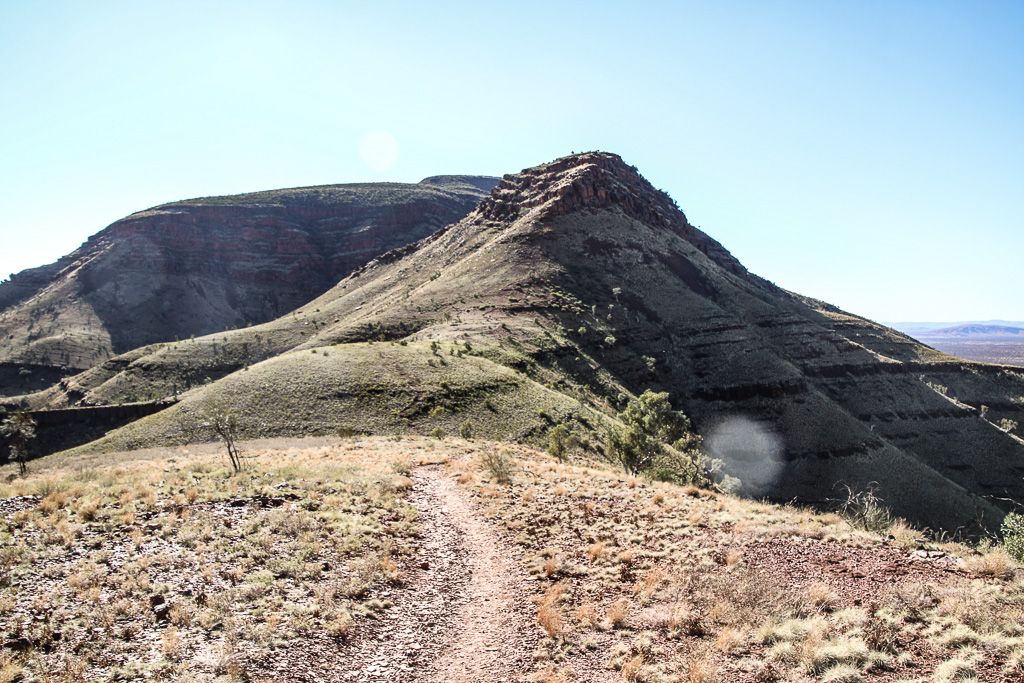 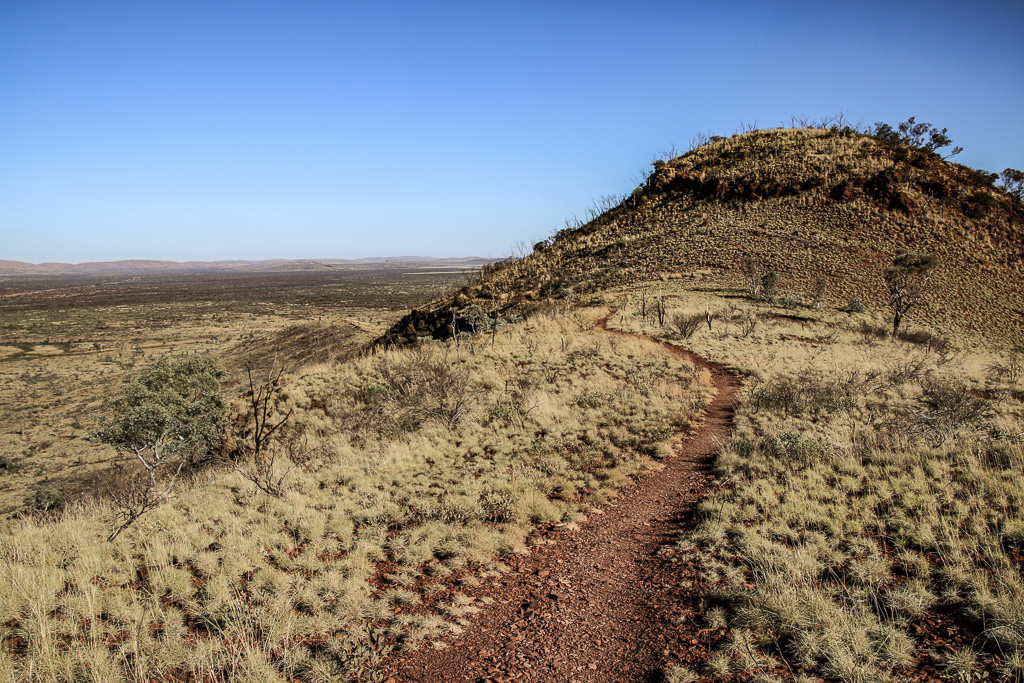 The path winds along, moving as much horizontally as vertically for the first few kilometres. The ascent is a slow one to start with, with a nice gradient leading half way along the mountain.

I could begin to see the Karijini plains sweeping out around Mount Bruce, red earth for as far as I could see. And ahead of me, I thought I could see the summit, which seemed though, suspiciously close.

The route suddenly took a more upwards shape, as I hit the base of a rocky escarpment. I was sweating profusely, covered in dust and the sun was really starting to hammer down now.

I slowly navigated my way upwards, over rocks and along small cliff edges dropping far down below, my progress slowing to the slowest of paces.

There was almost no one on the mountain, only one brisk walker had passed me as I slowed to tackle the vertical route upwards. Most travellers to Karijini simply stick to the gorges and the swimming pools, and I was wondering now in the sweaty heat why the hell I hadn’t gone for a swim in the refreshing waterfall instead today?

I thought I was nearly at the summit. The entire walk is only 10 kilometres return, and I figured I must have already walked close to 4.

How wrong I was.

As I rounded the top of the latest, rocky obstacle slowing me down I hoped to see the summit just ahead. No, the summit was far beyond what I had though was the top.

This was a bloody false summit.

I still had a long way to go. 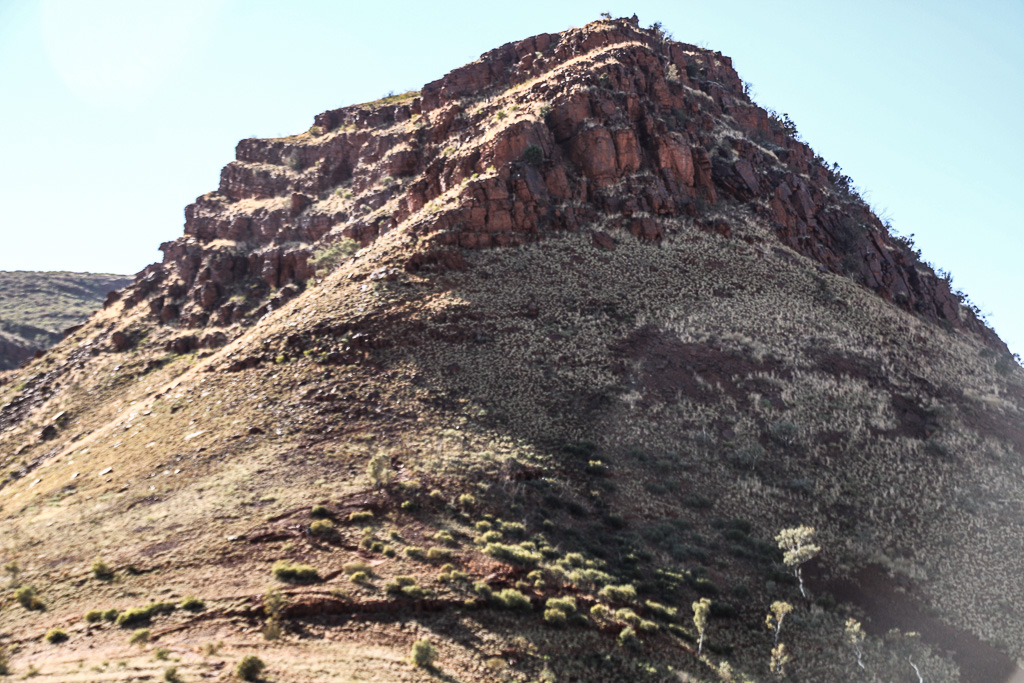 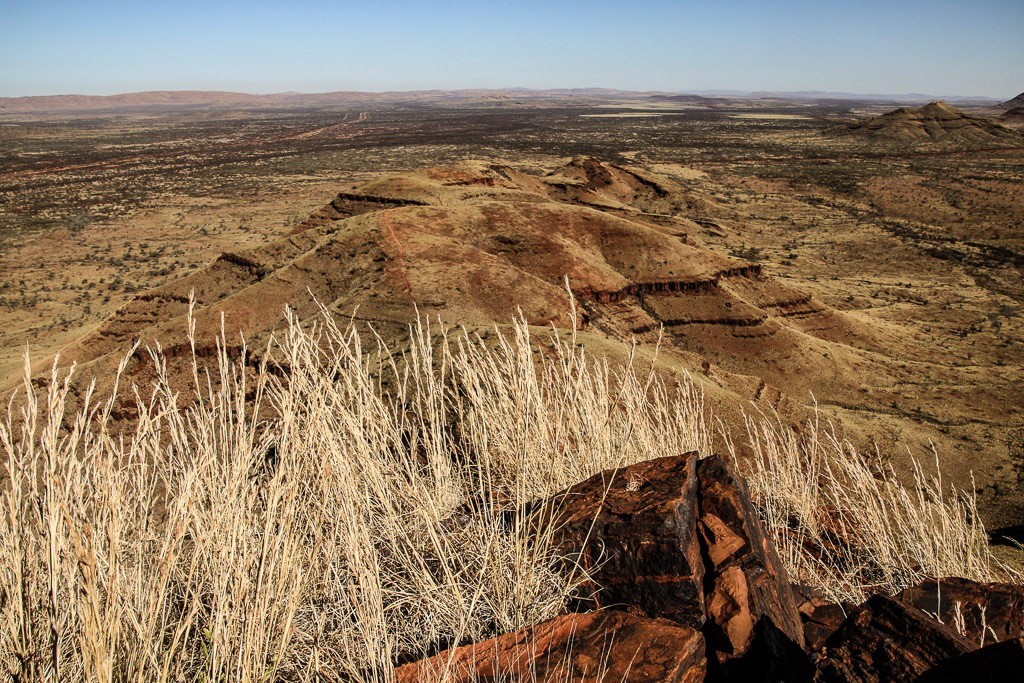 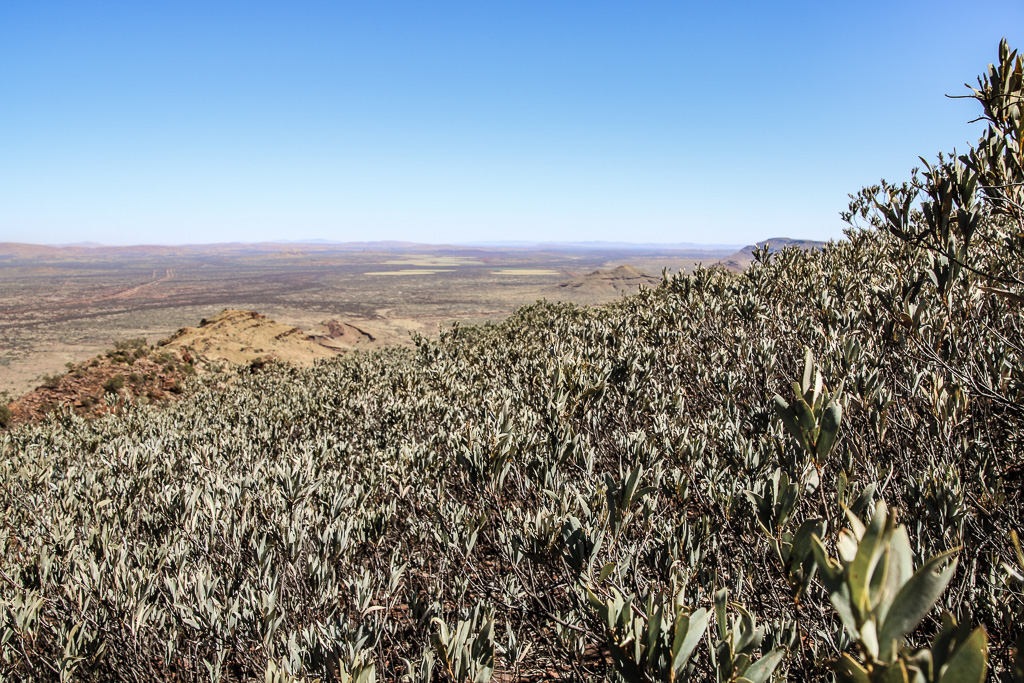 Onward To The Summit Of Mount Bruce

I hadn’t covered the distance I thought I had, I was going far slower upwards on the challenging middle ascent than I had anticipated. It was starting to get much, much hotter and I had to push on hard.

To beat the midday heat, I hiked onward to the summit of Mount Bruce at a much faster pace. Now the route was easier too, it was steep, but the trail was smooth and along a well defined path.

On the side of the mountain the wind began to hit me. It was much colder now than it had been below. I was getting closer.

Along the mountainside I pushed up, and before long I hit the summit.

A huge rock pile stood atop the summit, balanced on the edge and precariously looking out over Karijini National Park.

Here it was bracing, the wind whipped across the plateau at the top.

I had made it, I was standing at 1234 metres, on the second highest mountain in Western Australia. That’s more of an achievement than it sounds, I guarantee. 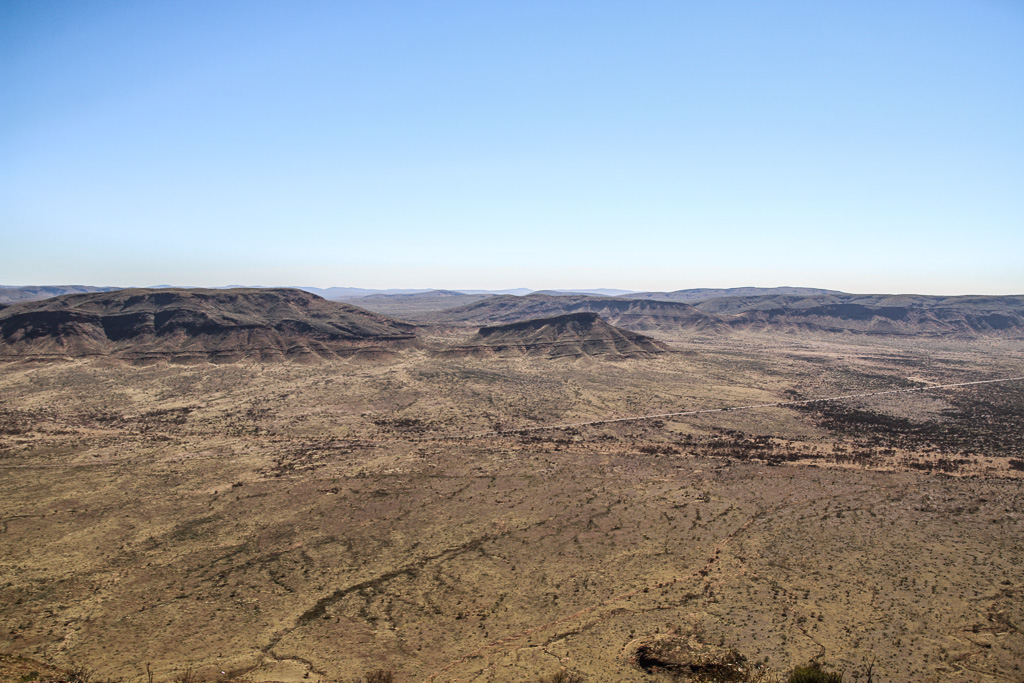 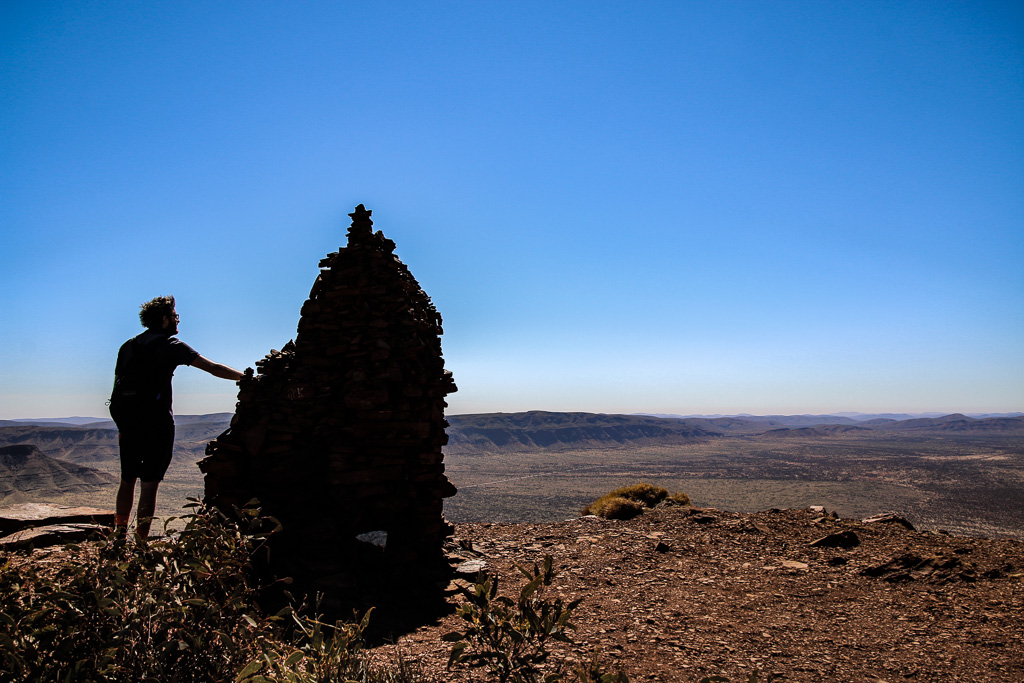 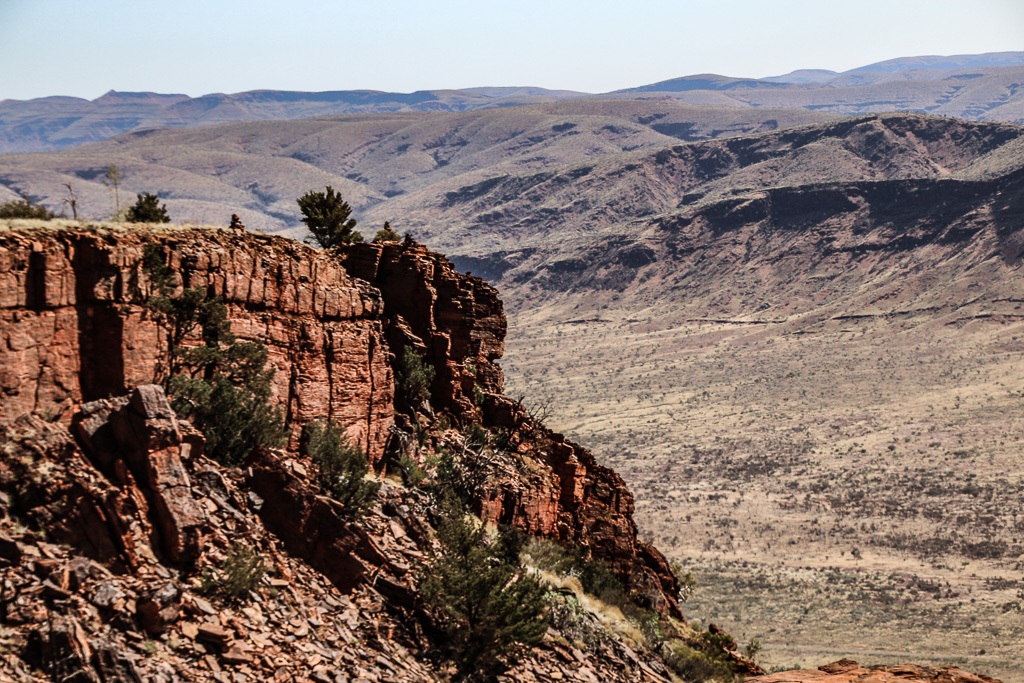 All The Way Back Again…

I didn’t hang around too long.

After admiring the view I set off back down the mountain again, knowing full well that although here the temperature was rather pleasant in the wind, down below, it was getting hotter and hotter.

I began hiking downhill, all the way back again to where I’d set off a few hours earlier, and covered in a lot more sweat and red dust than I’d set out with. 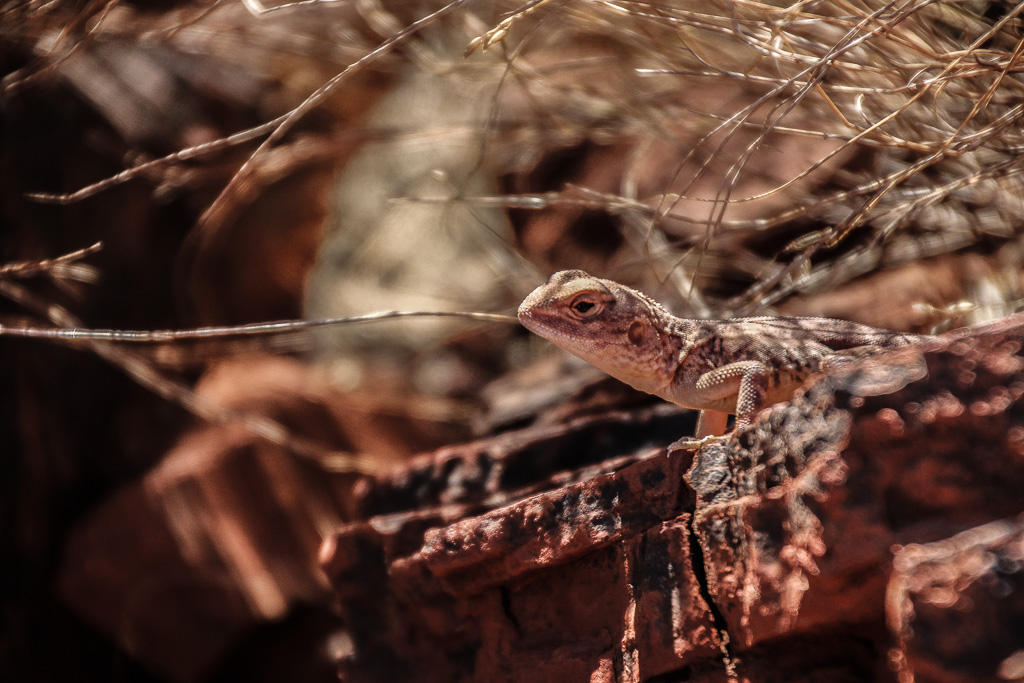 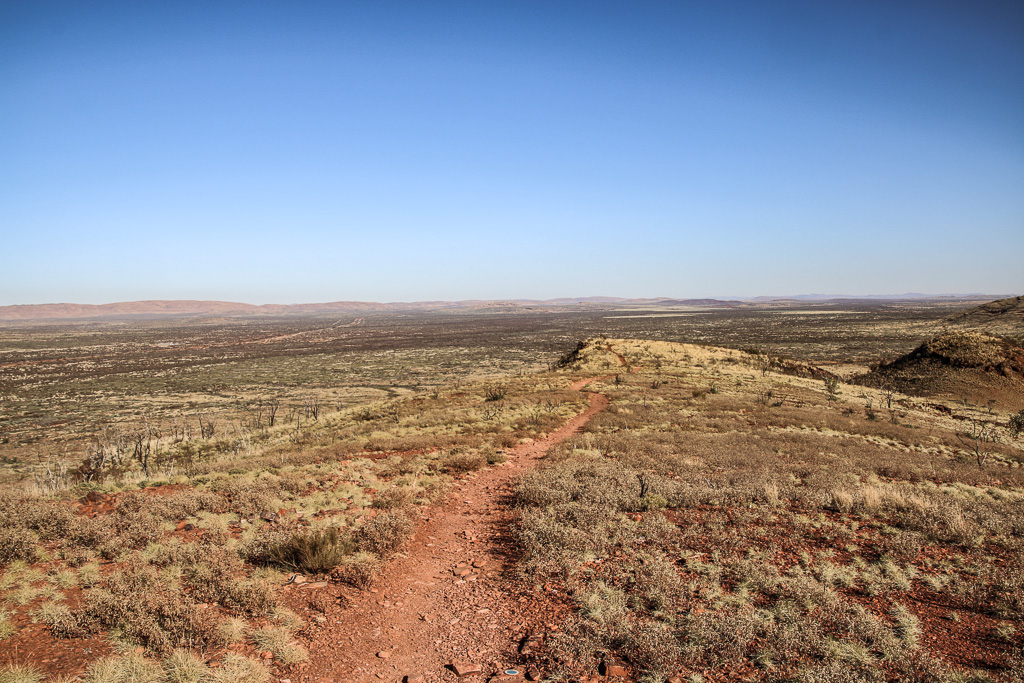 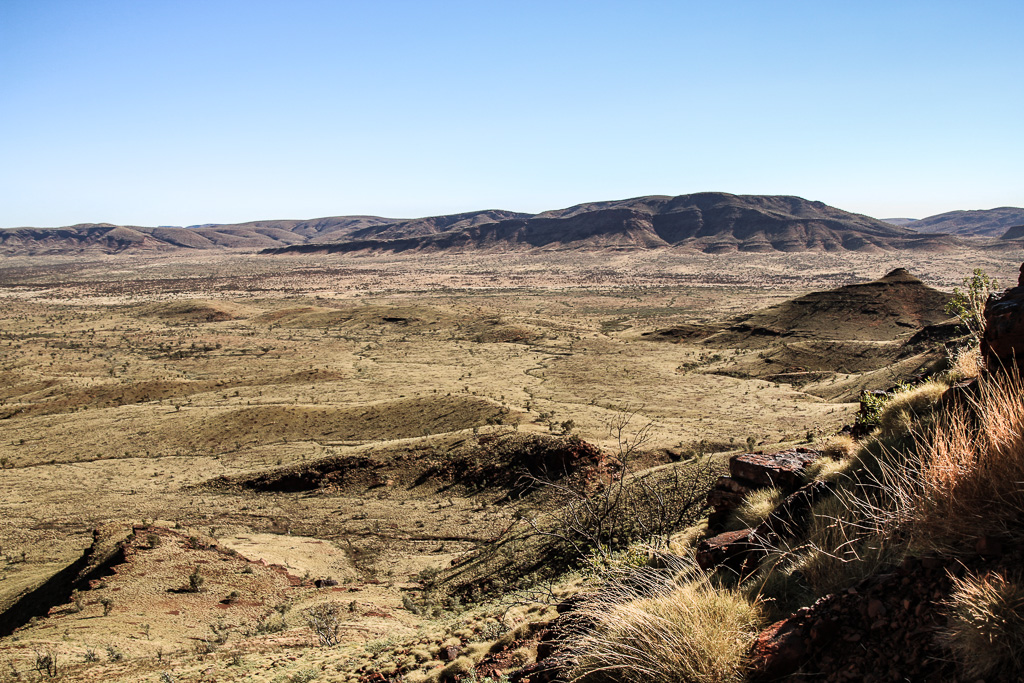 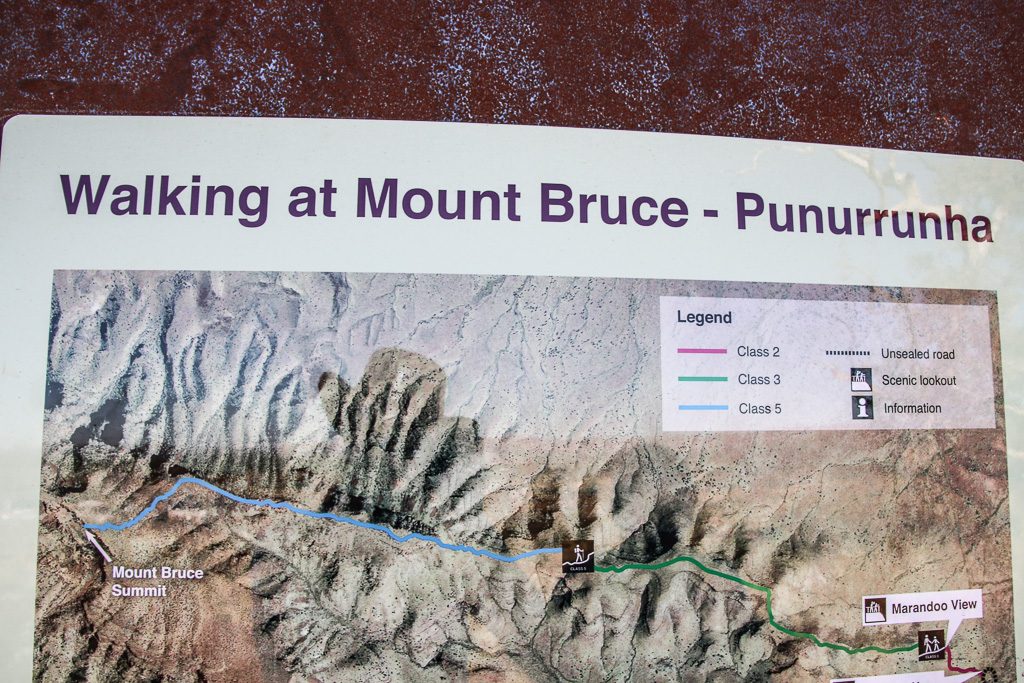 All Words And Photographs By Richard Collett

Travelling to Karijini National Park in Western Australia? Then why not support this blog by booking your accommodation through our partners at Booking.com! There’s no extra charge to you, the customer, but you’ll help me to keep creating more awesome content like this! Just click HERE!

Hiking To The Top Of Mount Tapyas