I Went To Luxembourg and Found a Rocky Fortress 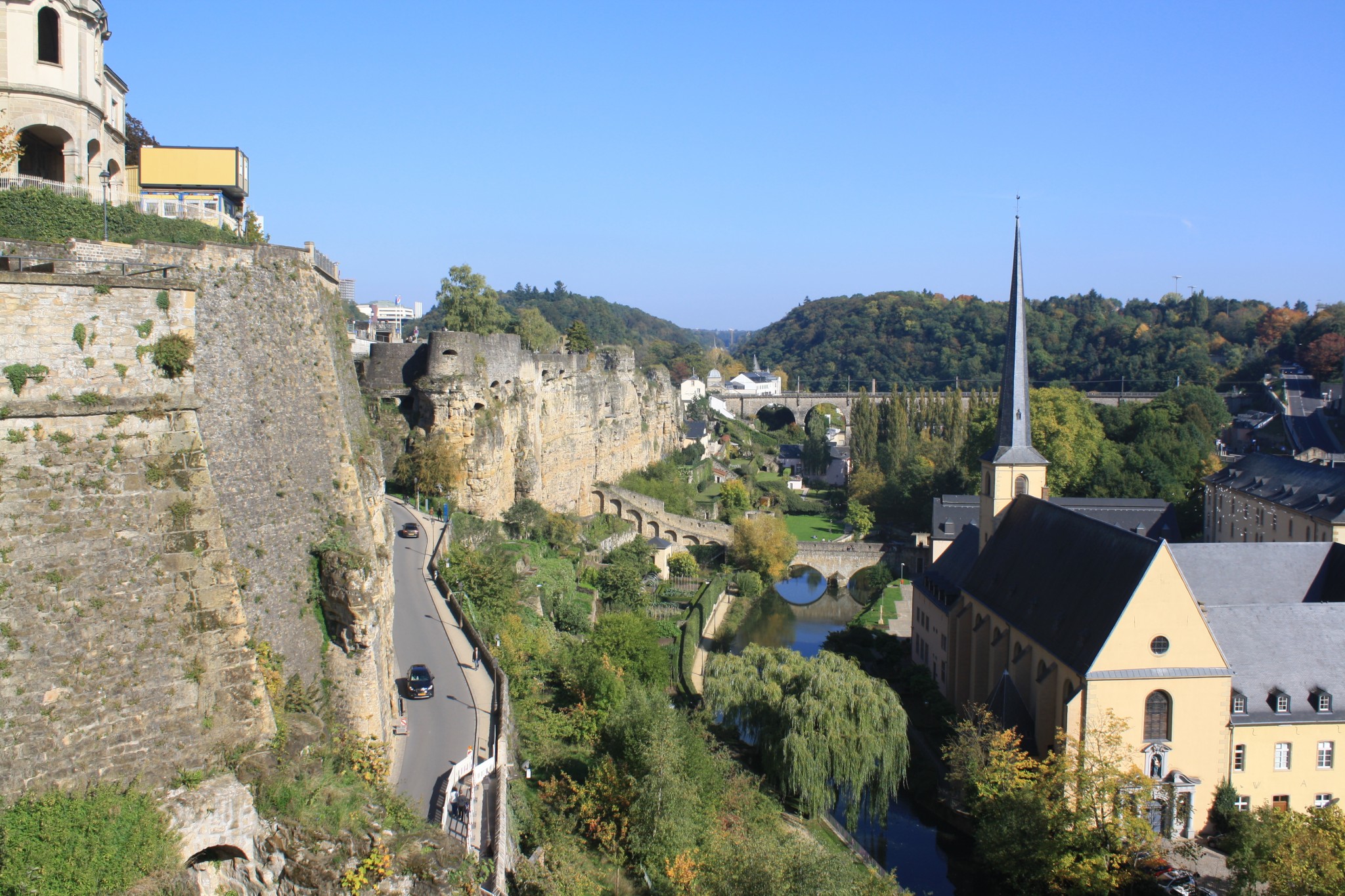 Luxembourg, the crossroads of Europe.

A land which doesn’t quite know if it’s French, German or some hybrid mix of it all, and a land which makes a hell of a lot of money doing whatever the hell it is they do. I went to Luxembourg City, not quite sure what would be there, and left not quite sure of what I had seen. I did find a rocky fortress in the cliff though. 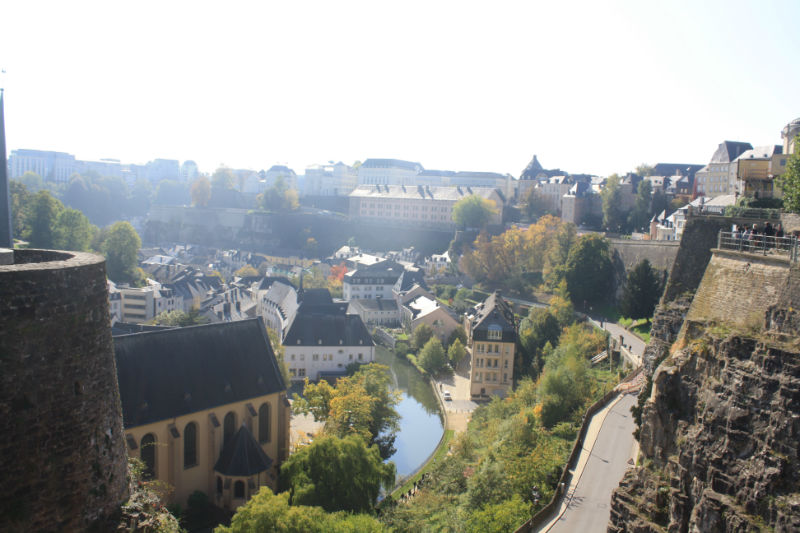 Luxembourg is small. Really small. And Luxembourg City- an imaginative name for a capital- is even smaller. That hasn’t stopped Luxembourgers (I think that’s the correct demonym?) from smashing it on the living front though. They have one of the best standards of living and one of the highest GDPs in the world. I guess size doesn’t always matter. 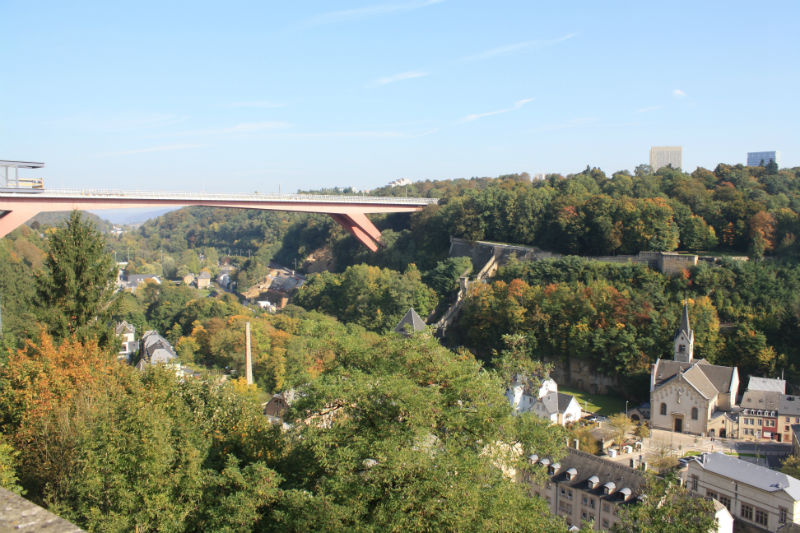 I wasn’t entirely sure if I would be able to fill all the hours I had here, but I was going to give it a damn good shot. If I’m honest, looking at the map it really just seemed like a good stopping off point on my way from France through to Germany as part of the overland journey to Lhasa. I guess that’s what the Germans thought too when they occupied the country during the world wars. Except they were going the opposite way to me of course. 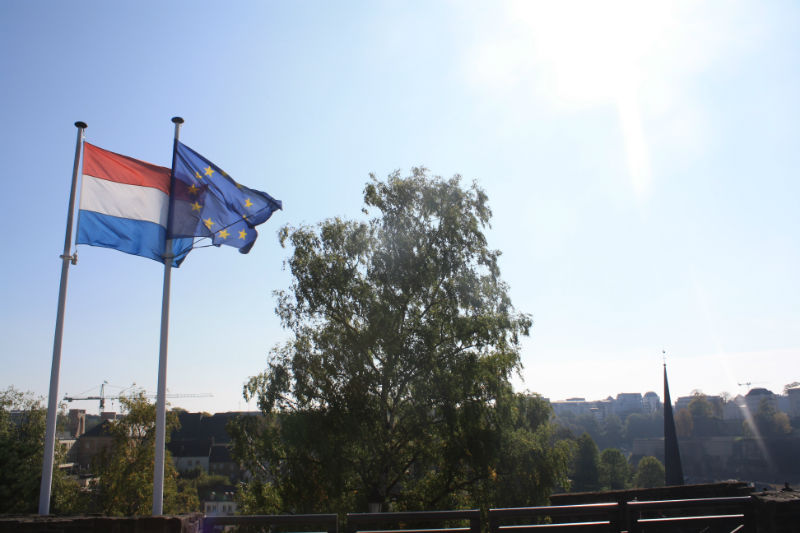 It’s this strategic position that gave Luxembourg its independence. They’ve flirted with all the great powers surrounding them, and have three official languages. French, German and Luxembourgish. And these days the city is international too, being the seat of a fair few European Union institutions. 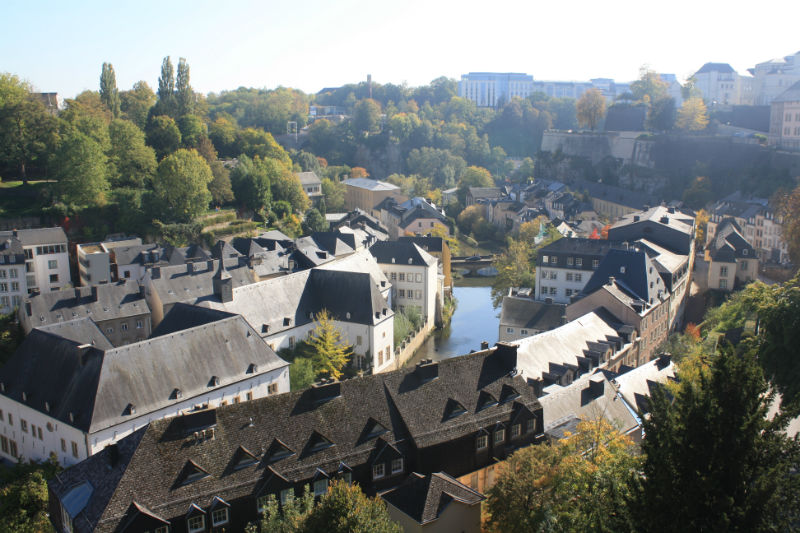 Luxembourg City was long feared for its huge fortifications. Whoever wasn’t occupying the country was terrified of these, and the castles were frequently a cause of dispute and even war, especially between the French and Prussians in the 19th Century. In 1867 Luxembourg was granted its full independence in exchange for neutrality. This meant the fortresses had to be demolished. 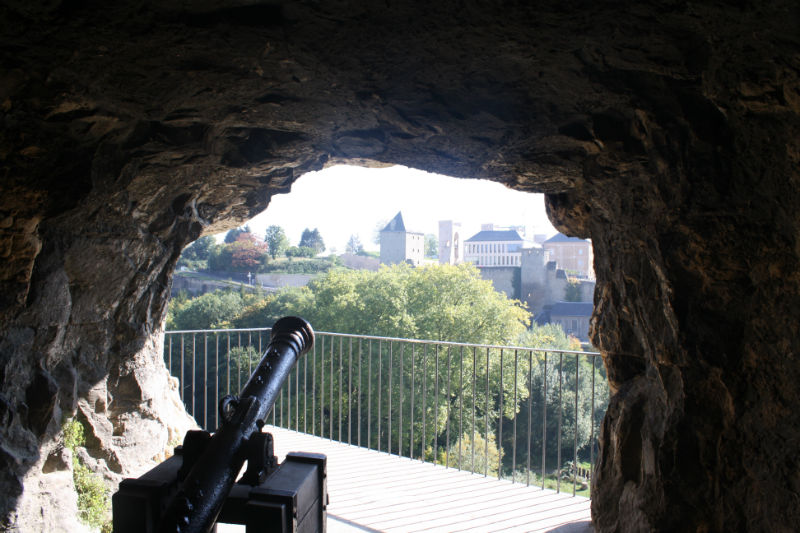 Being hewn from the very rocks the city stands on though meant this was no easy task, and I went in search of the remnants. It turns out that there’s quite a lot left. 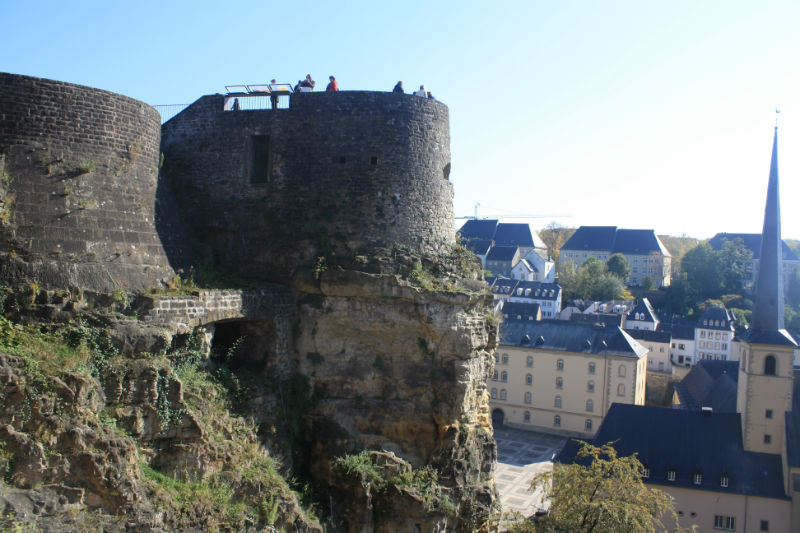 Luxembourg City is easy to navigate. Just follow the tour crowds and you’ll see it all in no time. They even led me to the fortress I was trying to find. 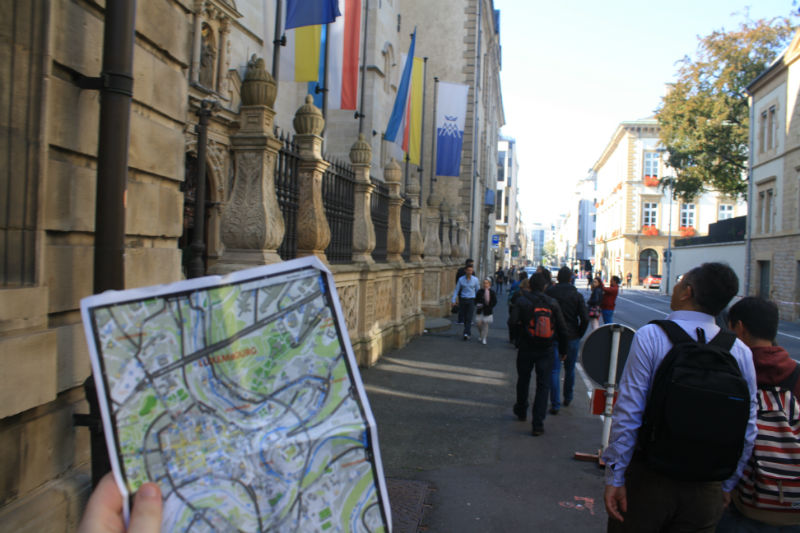 The ‘Casemates Du Bock‘ was that particular attraction. Bock being the enormous cliff in the old part of the city and the casemates being the fortifications built on top, inside and all around that cliff. 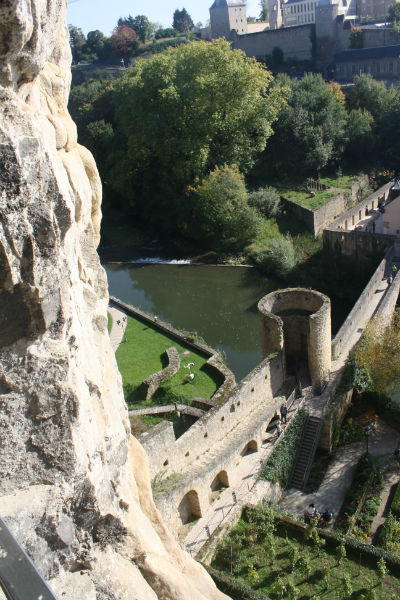 The Bock has been used for well over a thousand years to defend the City. Over the years the defences were repeatedly destroyed, rebuilt and expanded. Now there is a huge network of tunnels through the rock itself and a few remaining turrets which survived the last destruction. 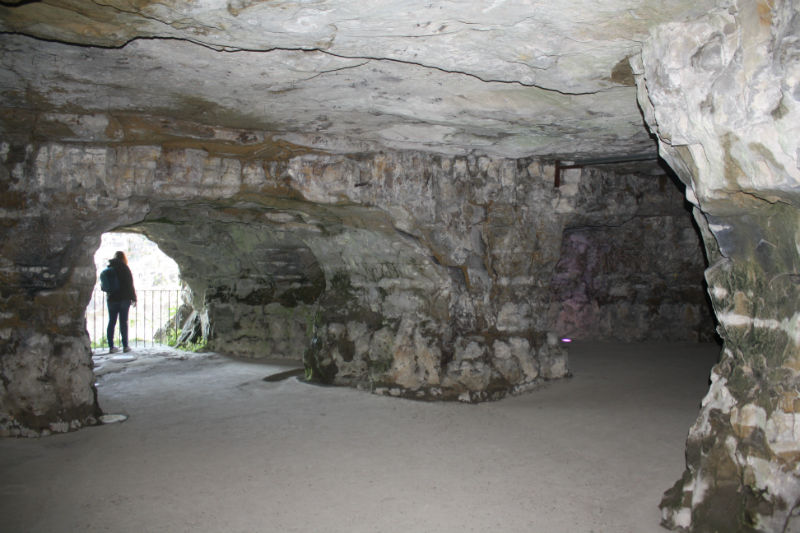 The fortifications here were strong enough for Luxembourg to be named the ‘Gibraltar of the North’. It really is an underground maze. 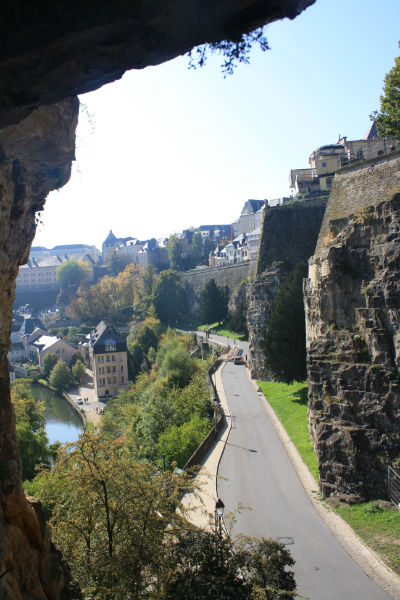 The casemates are a foundation of the city. While the rest of the city was neutralised, it was not possible to destroy the defences here without also destroying the entire city. And it’s probably for the best they didn’t completely destroy everything. It’s a good looking place. 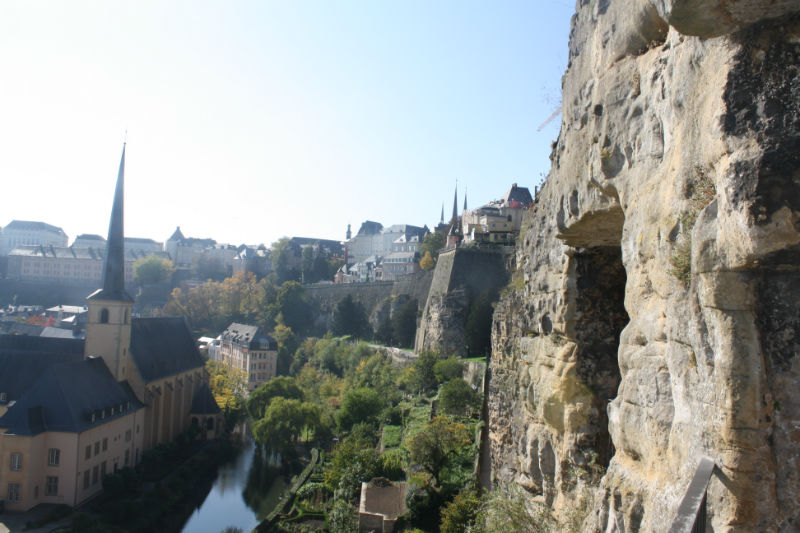 After getting lost in the tunnels under Luxembourg for hours, I finally found daylight again. I was soon confronted by a strange parade of firemen and firewomen marching through the streets. At least I was safe from any rouge flames. 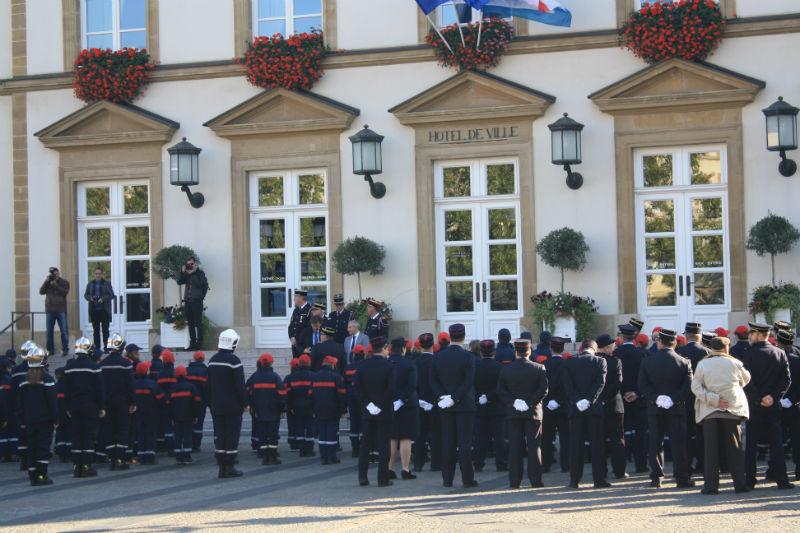 It turns out it was fire safety day in Luxembourg. I think. At least that’s the impression all the fire fighters gave me. 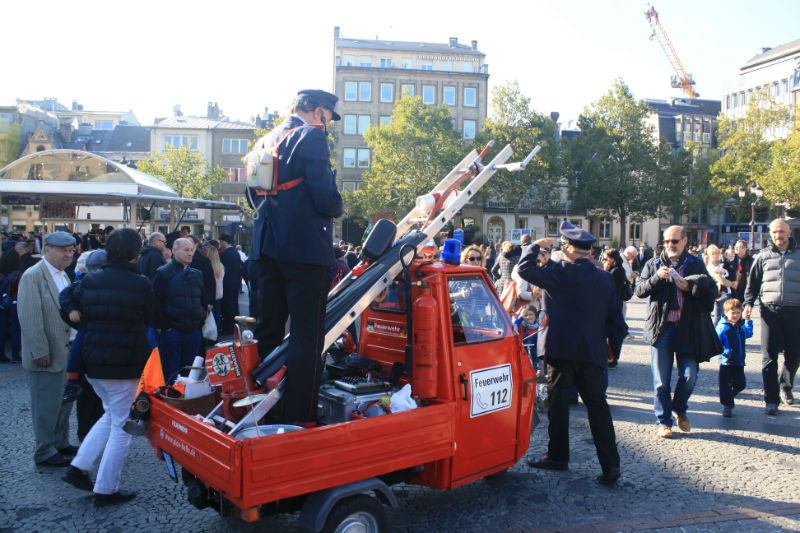 The whole city was out. I even got served a giant German Bratwurst by a French speaking Luxembourger while drinking a Belgian beer. That’s multiculture, and that’s  Luxembourg.