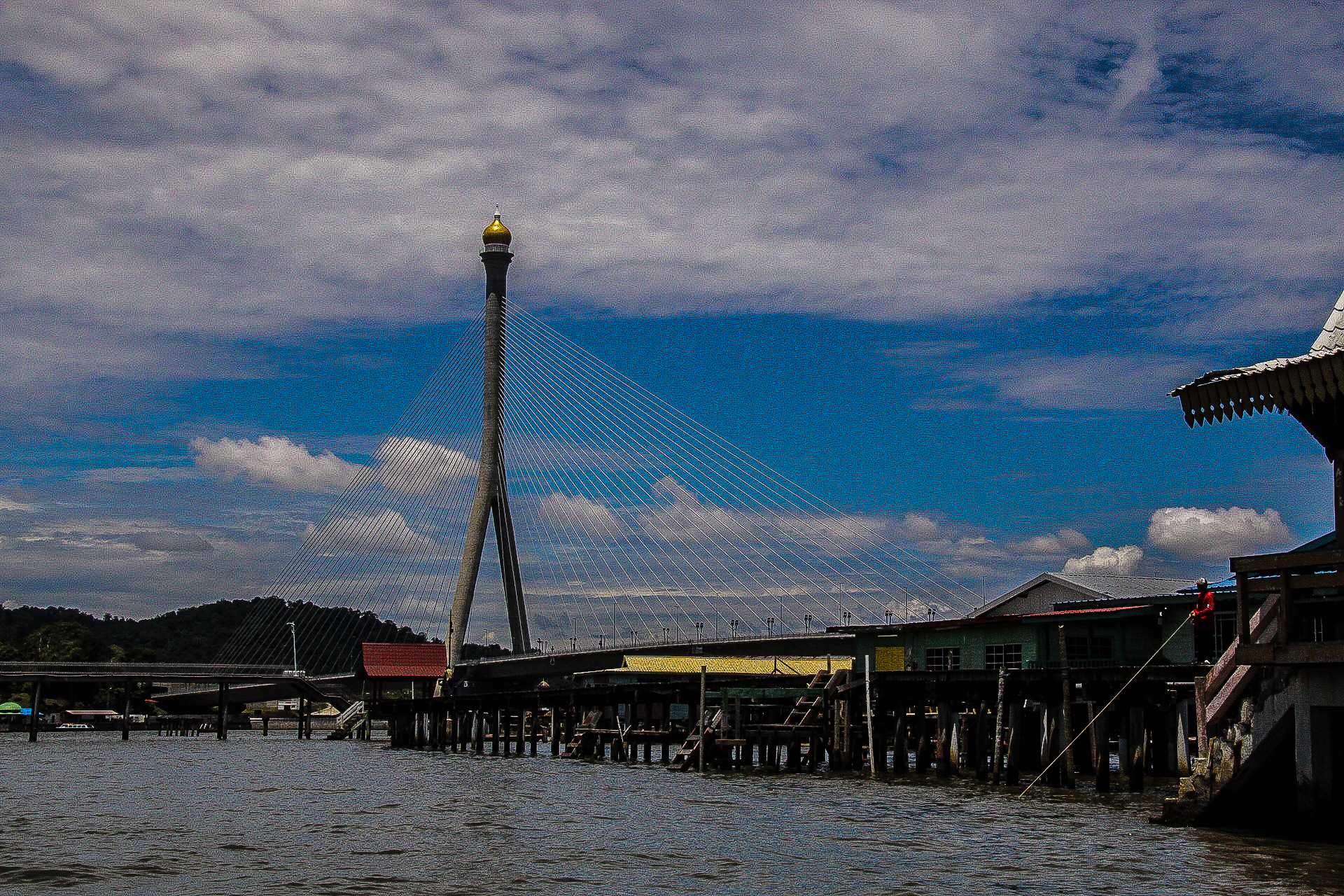 This entire village is floating.

On the banks of Bandar Seri Begawan’s city centre is an entire floating civilization stretching along the river for miles.

Over 30,000 people live on the water here, and there are restaurants, schools, shops and even police and fire stations amongst the houses. This is the more traditional side of the country, a place that seemed to me to be surviving in the face of modernity, and taking a boat tour from jetty to jetty and through the alleyways and streets on the water was the only way to really experience Kampong Ayer while I was in Brunei. 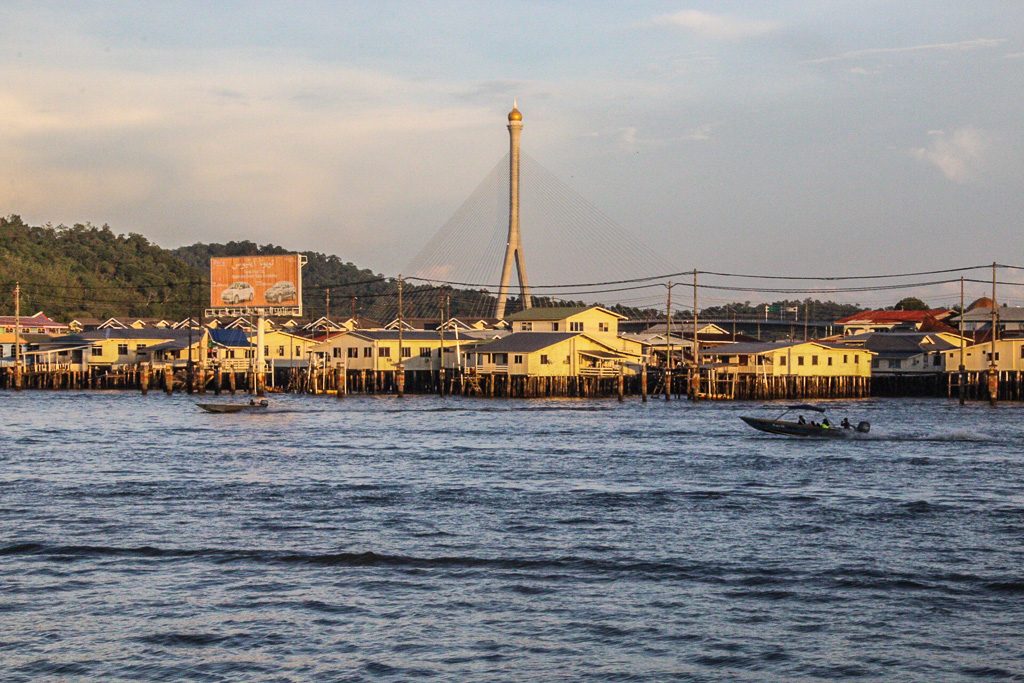 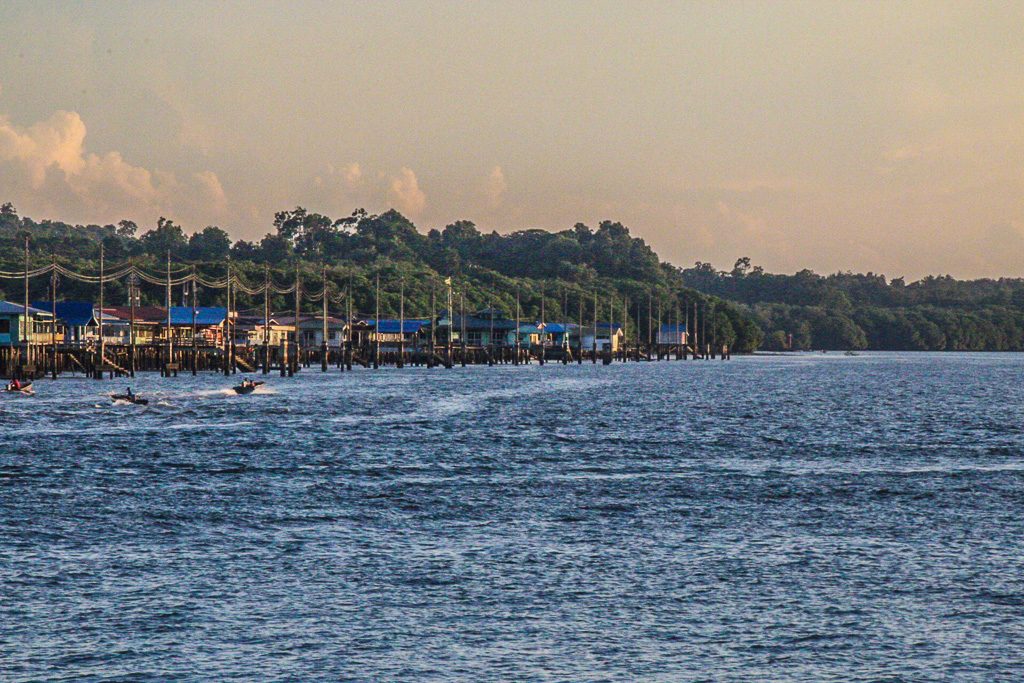 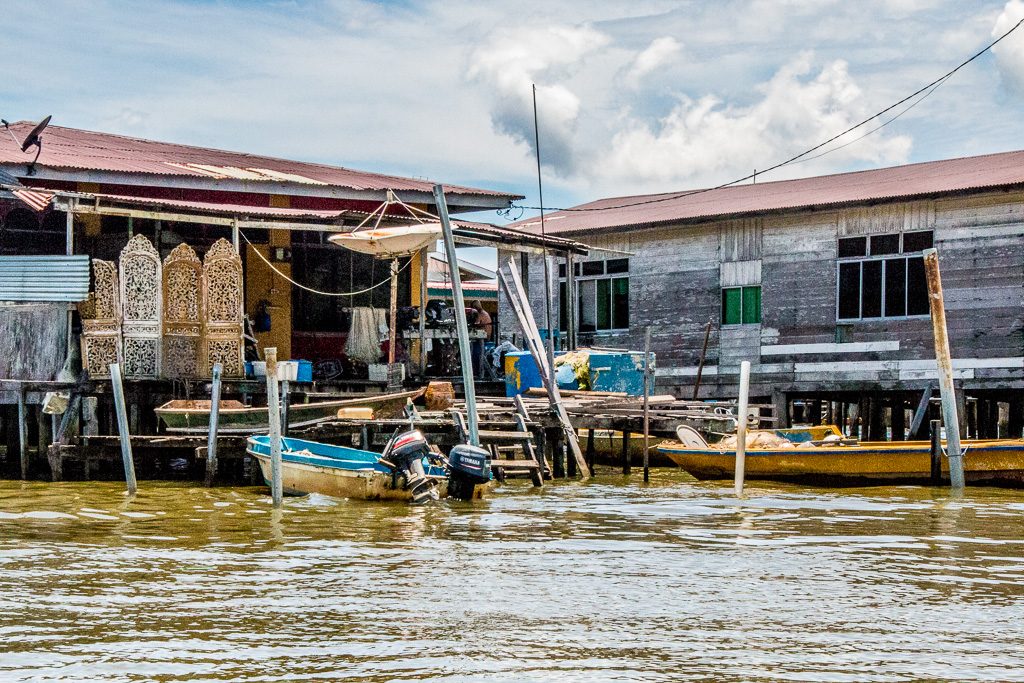 There are few traditional tourist sights in Brunei. It’s a small country, and tourism itself is a relatively new concept here. Most people I had met before travelling to Brunei had who been here or were from here, mostly shrugged off my questions of what to do, saying my four days would be more than plenty, there were a few mosques and a little traditional, floating village to see – Kampong Ayer.

I imagined this floating village to be just that, a small affair on the water, perhaps a few houses on stilts and a few people still living in this traditional manner. When I arrived at the centre of Bandar Seri Begawan, the capital city, and walked to the banks of the river, I soon found out that I was very much wrong in my assumptions.

In fact, using the term village to describe this place just doesn’t do the scale of it any justice at all, or make it attractive to tourism. Calling Kampong Ayer The Floating Water City would be much, much more appropriate, and much better advertising. 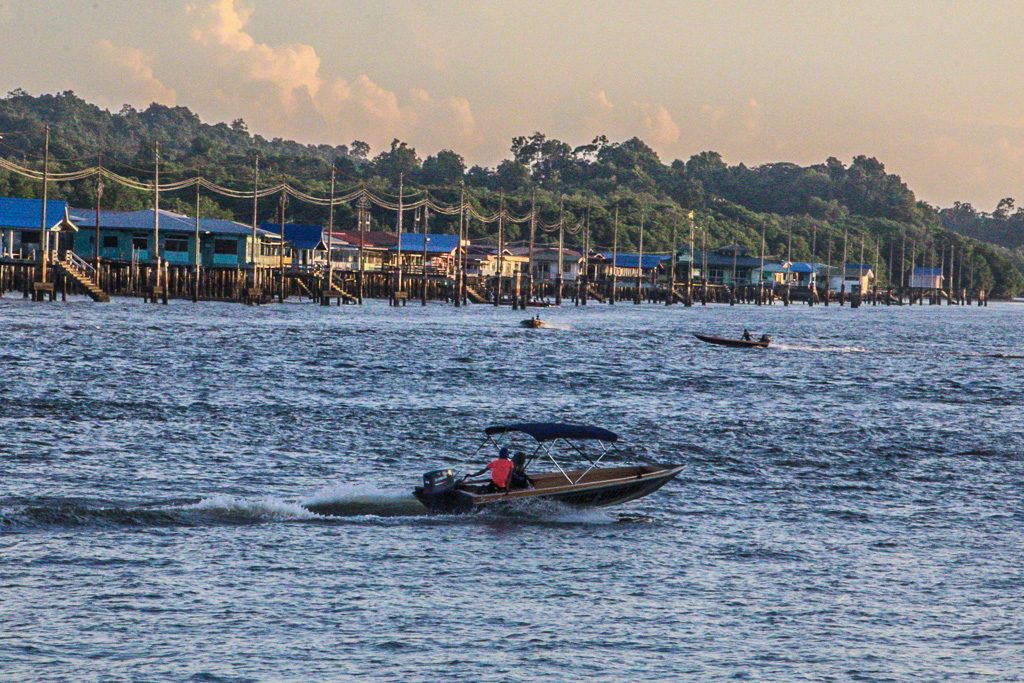 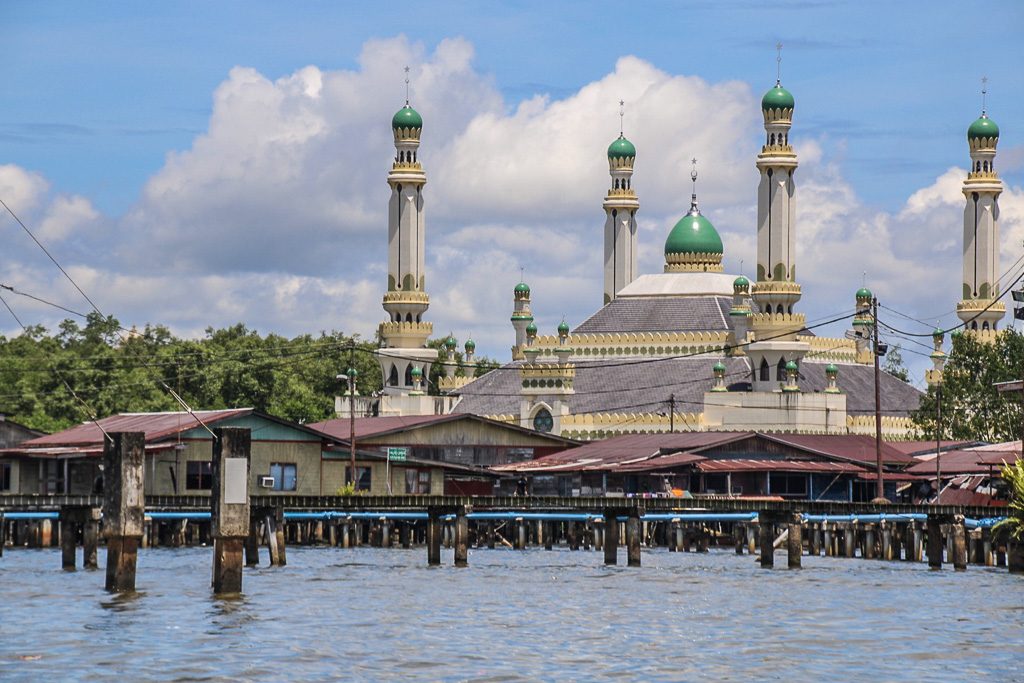 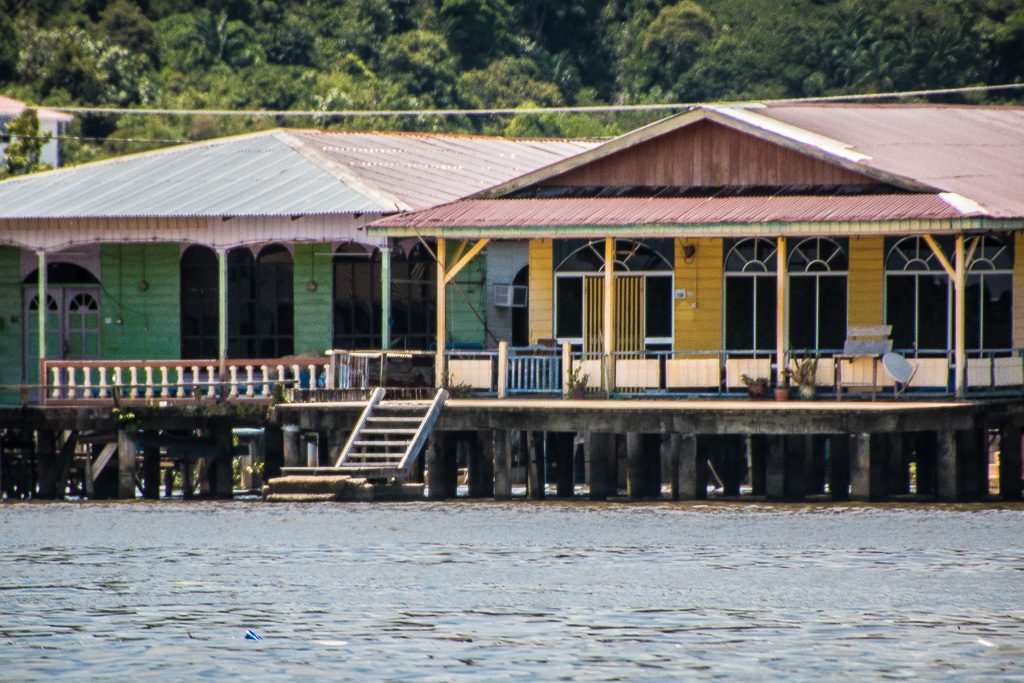 As I looked out over the river I was astounded by the sight of line after line of houses and buildings all raised high on stilts above the water and stretching for miles along the length of the rainforest that still covers much of the land around Bandar Seri Begawan.

So this was Kampong Ayer. The Water Village.

It is in fact, more than just one village. There are many villages along the river. And far from being just a motley collection of traditional houses, this water village was a mega village. A floating metropolis.

While this is the traditional style of living in Brunei, these were not old fashioned houses either, many looked relatively new, and all were connected with air conditioning, satellites, electricity. There were jetties spaced along the river that served as pick up points for boat taxis and an intricate, interconnecting series of walkways linking many of the different components and areas of this ‘village’.

It was far from anything I had anticipated seeing on the river here. 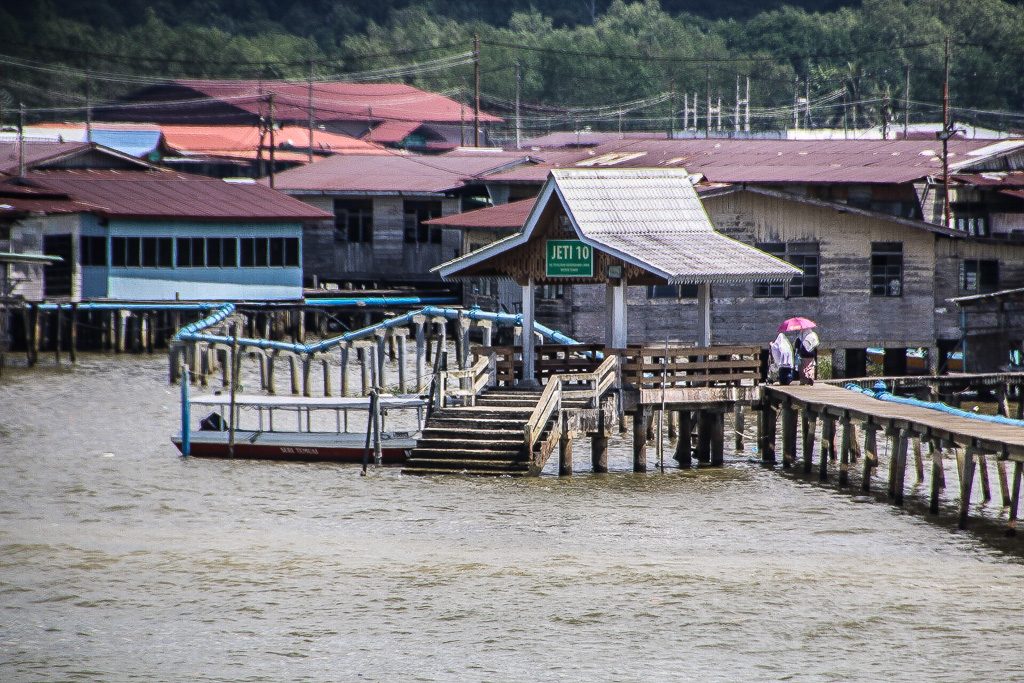 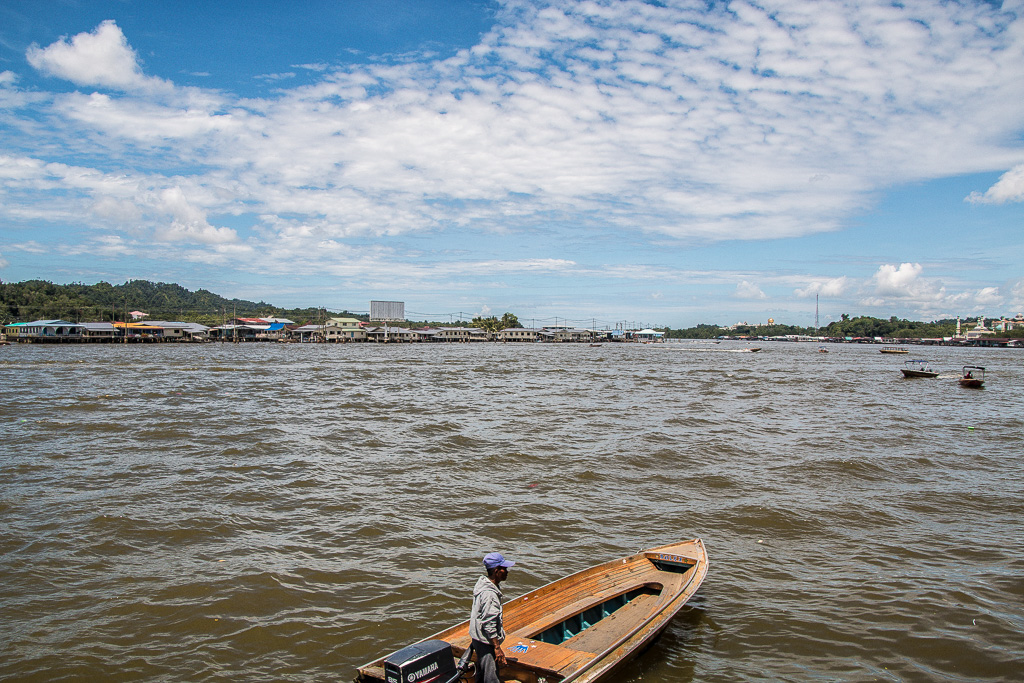 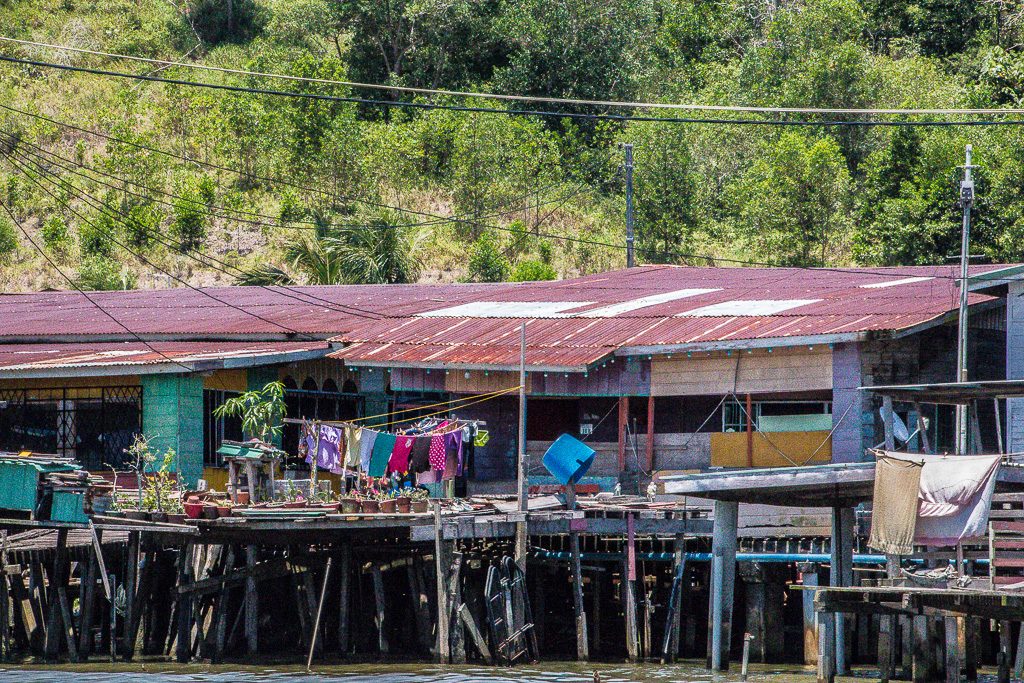 Kampong Ayer has been at the heart of Brunei for centuries, ever since the original Malay migrants moved to Borneo, to carve out an empire. Brunei has now shrunk to a fraction of its size, as in the 15th Century it encompassed the majority of present day north Borneo and much of the southern Philippines.

The country is now however one of the smallest in the world, but while the borders of the Sultanate may be much reduced, Kampong Ayer has continued to survive, enduring the collapse of empires, the harsh, tropical Bornean weather, war and natural disaster.

The villages are still home to around 30,000 Bruneians, the largest collection of houses and buildings that exists raised above water on stilts anywhere in the world. It’s a remarkable, traditional way of living that has been modernised and revised to accommodate all the standards of living you would expect on dry land.

There are thousands of houses, all connected to electricity, sewerage and telephone lines. The villages have their own schools, shops, restaurants and emergency services.

The only thing lacking is a huge shopping mall, or airport, but of course, they are just a short boat ride away in Bandar Seri Begawan. 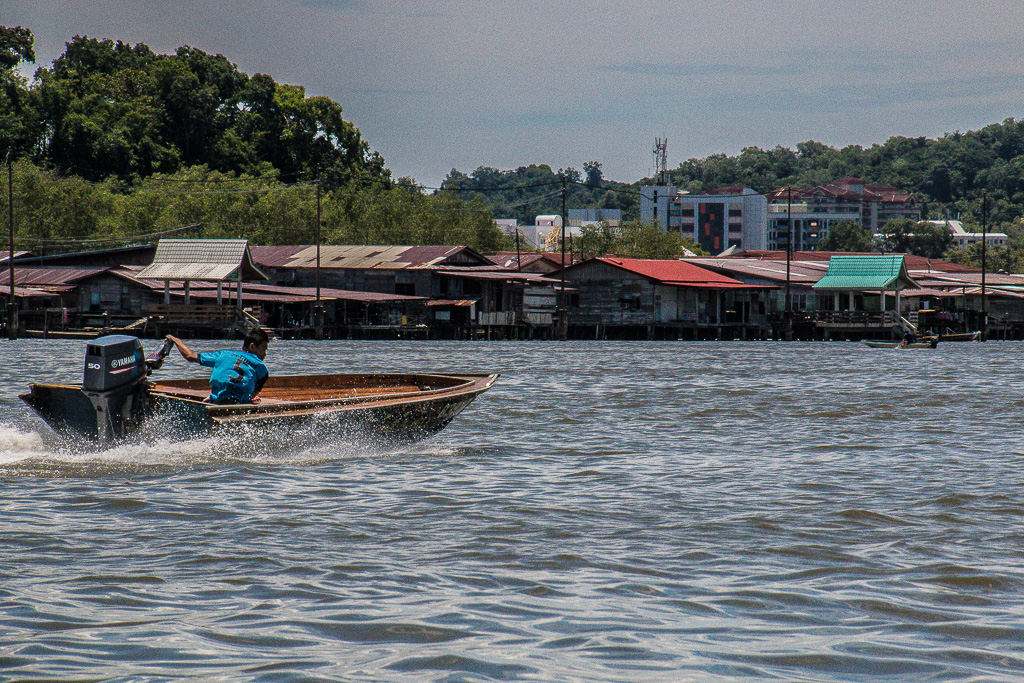 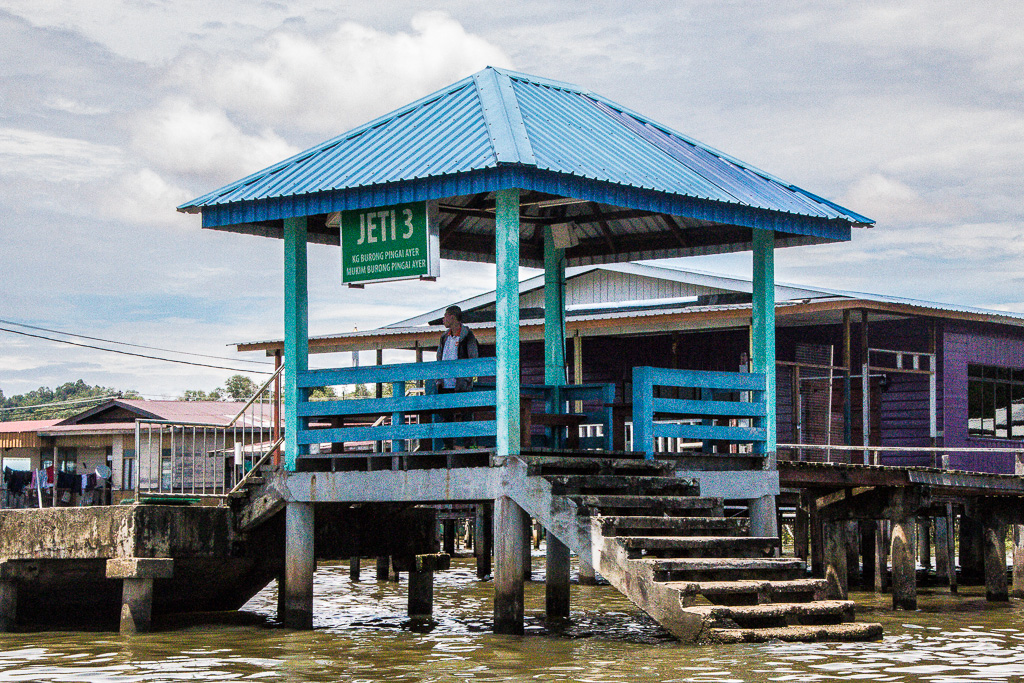 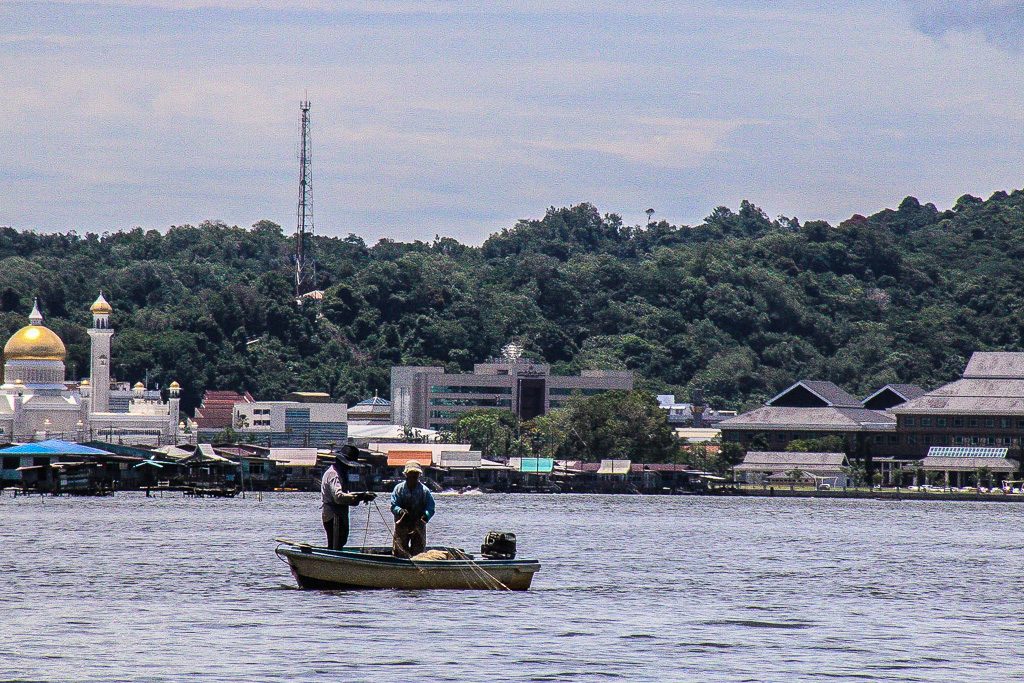 Getting Out On The Water At Kampong Ayer

From the river bank on dry land I could see small boats zipping across constantly. A system of jetties has been constructed at various points in the villages, and the local residents simply wait here for a taxi boat to pass by, hail it down and head on to their destination in the water villages or over in the city.

For those that would rather walk, huge sections of the individual villages are interconnected with raised walkways, a labyrinth of pathways leading to mosques, restaurants and schools, and all high above the river.

As I walked along the stretch of promenade that faces out to Kampong Ayer, idle taxi boats began asking me if I wanted a lift across. Of course I did, and local taxi boat driver Roy, who lives on the water too, took me out for a tour of his floating metropolis.

He guided us along the river, ahead there was rainforest and on either side there were houses. Roy piloted the boat into the narrow alleyways that form channels and waterways between the buildings. People were walking along the wooden pathways above us, sitting out on verandas, tending to the odd chicken or enjoying lunch at the restaurants.

It was life as normal, except of course, I found every little detail absolutely fascinating, because we were on the river – much to the amusement of Roy who had spent much of his life here, out on the water.

From afar, the water villages had looked dense and sprawling, but up close, I realised just how many people really lived here on the river, but also, just how organised it all was. Many of the houses were in neat lines, with numbered water taxi points and a patchwork of walkways that once you knew where they led, would be easy to navigate.

Living here I realised, wouldn’t be too difficult. There was everything you needed in Kampong Ayer. 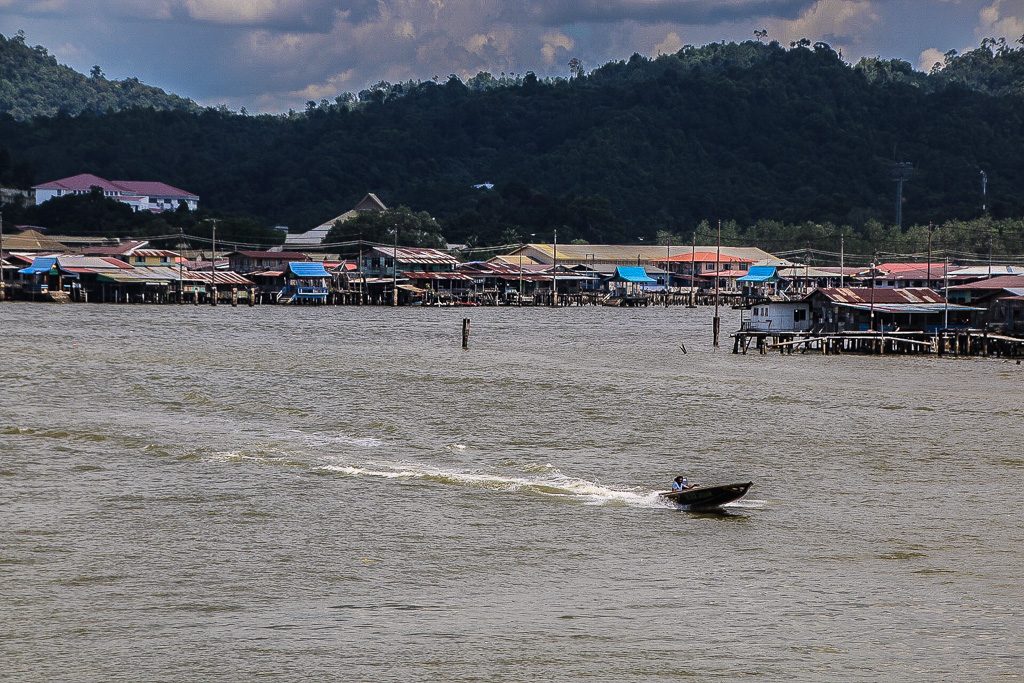 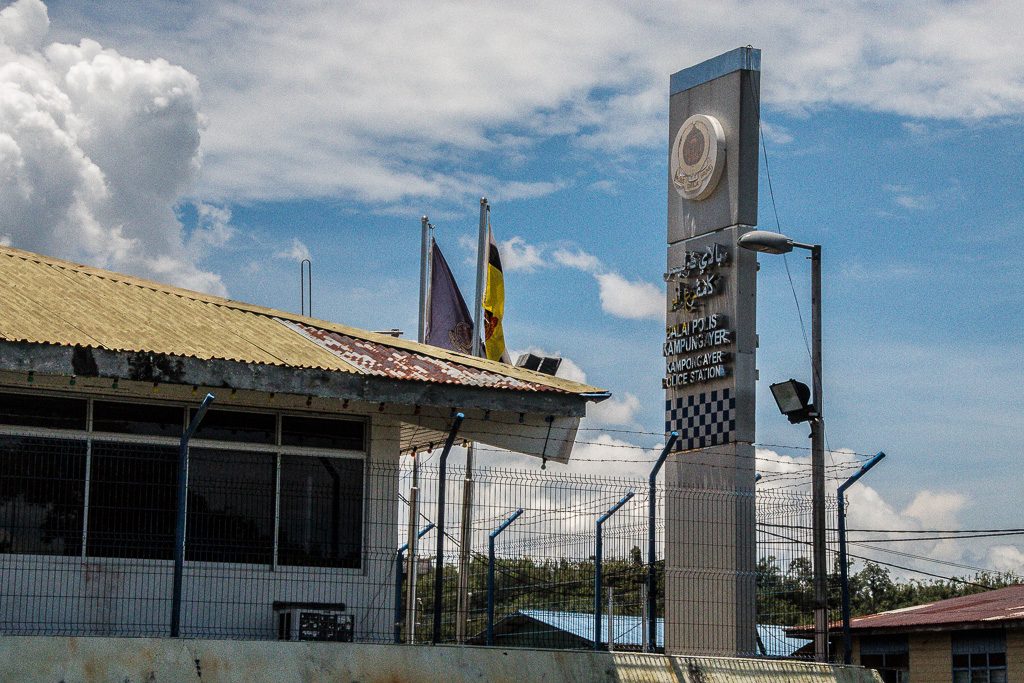 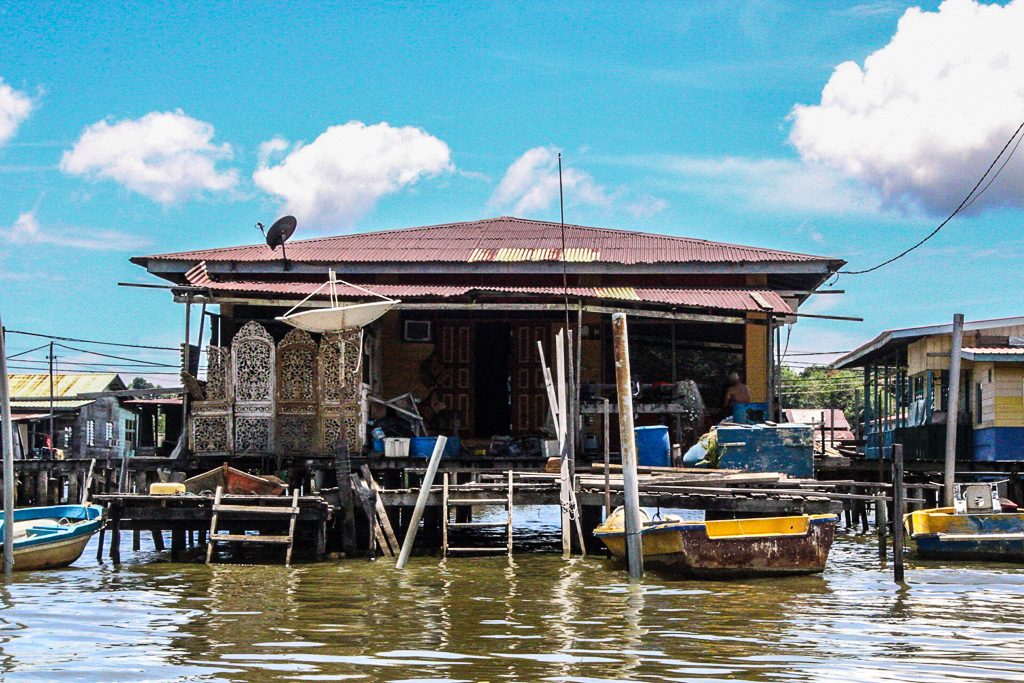 The Future Of Kampong Ayer

Kampong Ayer isn’t going anywhere fast. It has withstood centuries of increment weather, periods of war and the modern developments in the city adjoining it.

While of course, many locals have moved to the  the city and relocated to land, and some villages have disappeared entirely along the river – an inevitability in the global world we live in- the vast bulk of the houses still remain, and are even being modernised and expanded.

The government are even planning one extending the villages, building more and more houses, and for a small country such as Brunei that needs to preserve its natural rainforest – 70 percent of the country is still covered, quite a remarkable feat really – building on the water is just one way to make use of available space, without clearing more land in this small country. 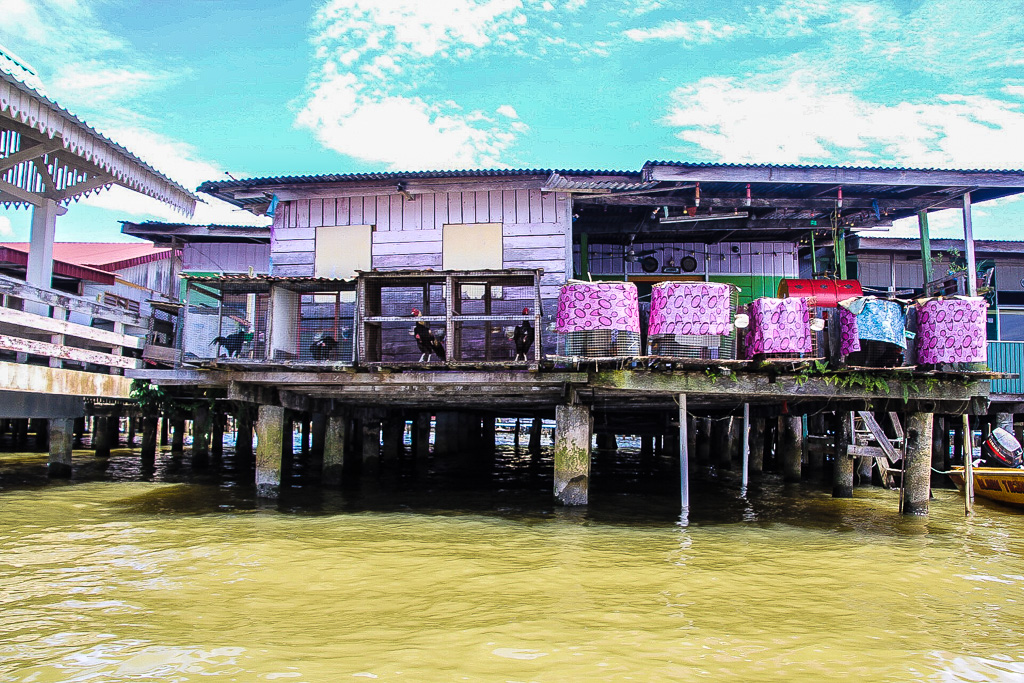 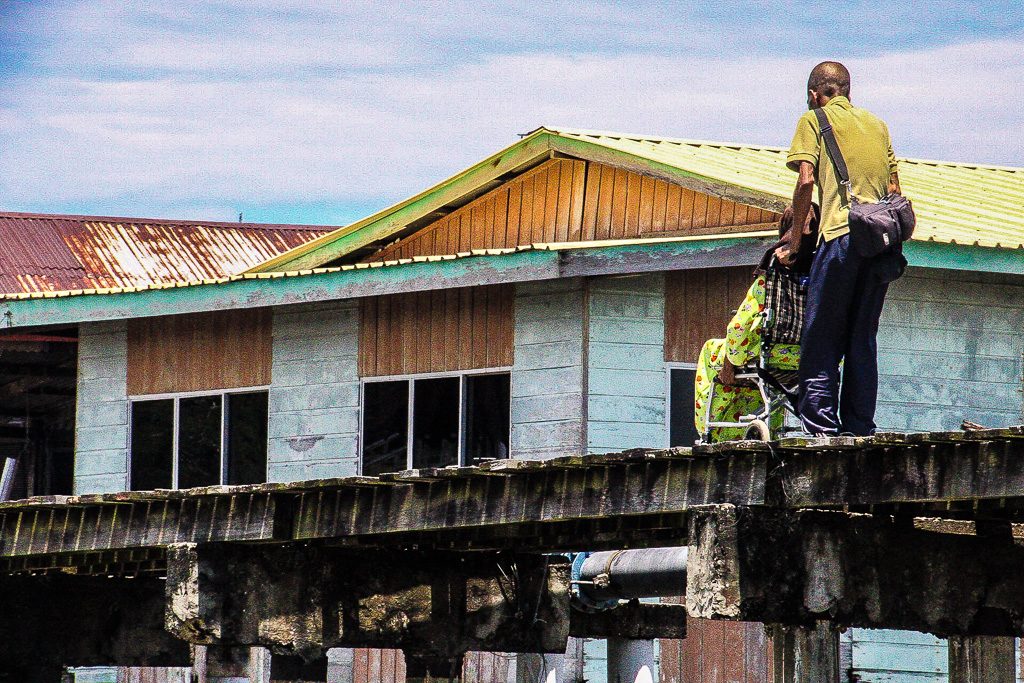 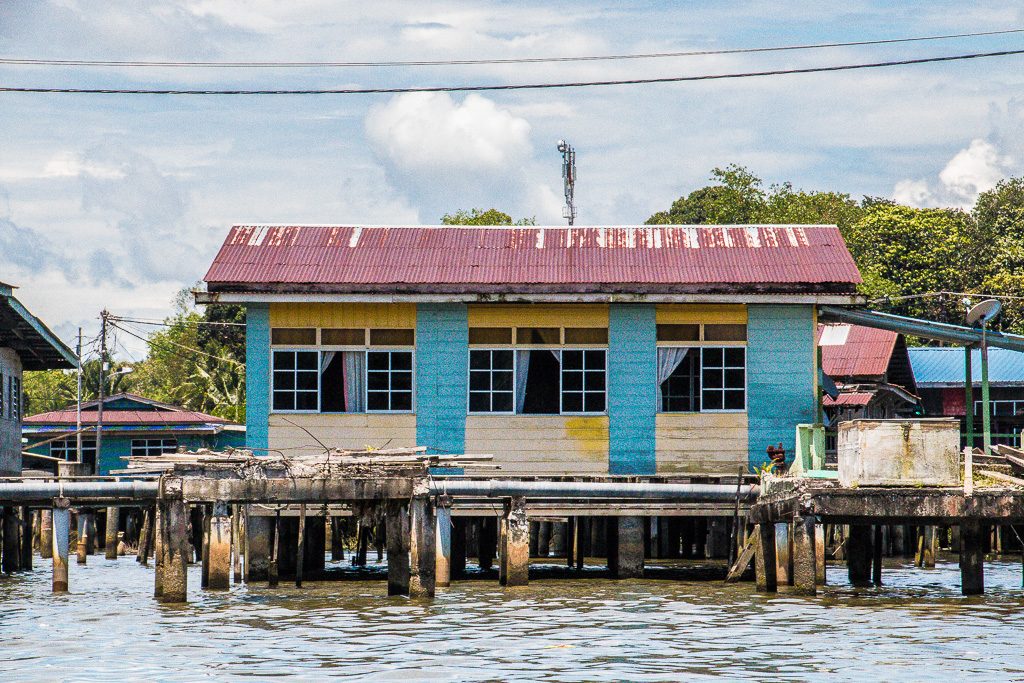 Travelling to Brunei? Sign up for Air BnB to book your accommodation using this link HERE and you’ll get £25 free credit towards your first booking!