Whale Watching on the Edge of the Arctic 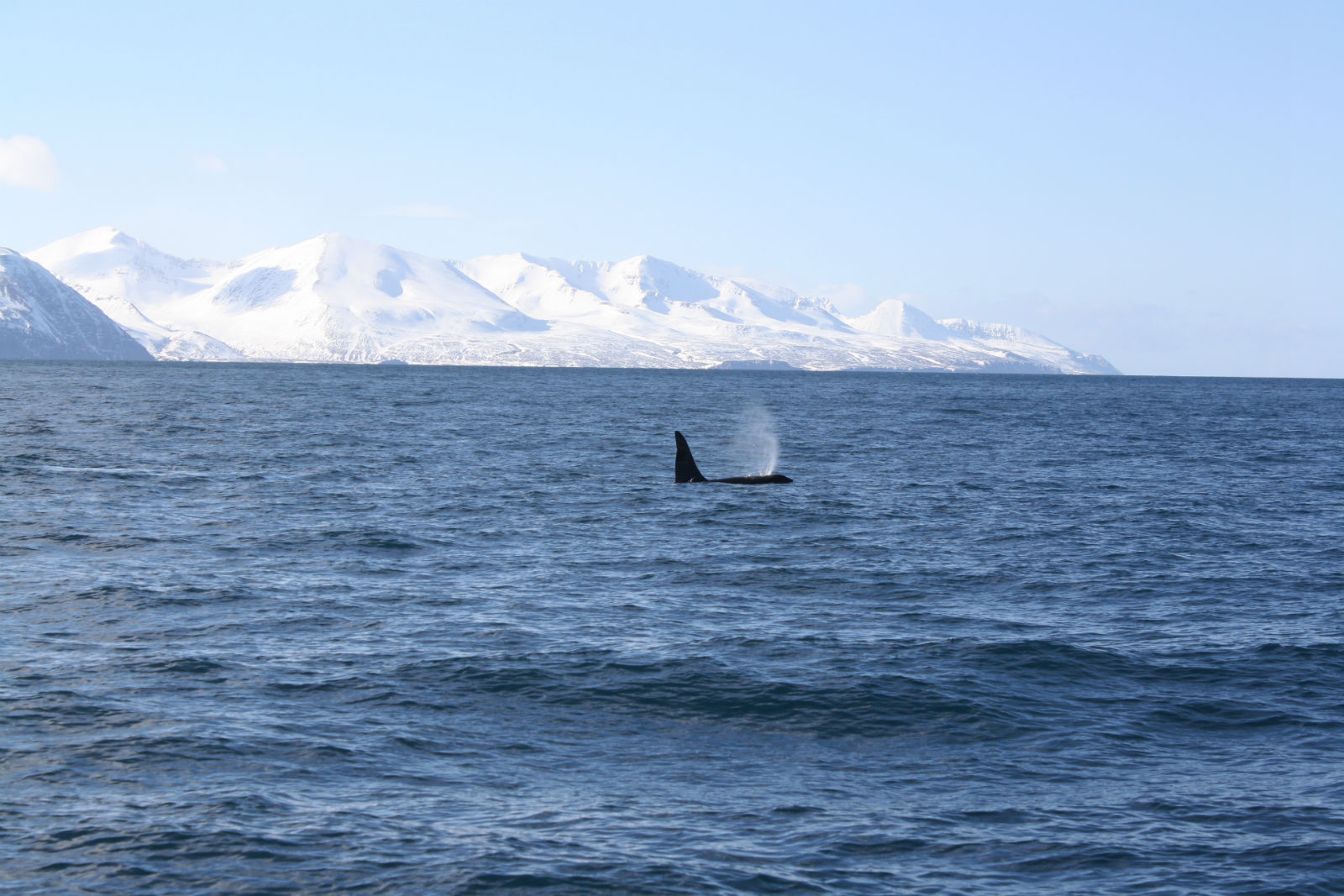 ‘Don’t throw up your breakfast’, our energetic guide exclaimed to the assembled ocean-goers on the deck of the boat as it pushed off from the harbour- ‘and remember, the toilets ARE NOT for sea sick people’.

We were a mere 25 miles from the arctic circle, and with that stomach churning advice were ready to find some whales. 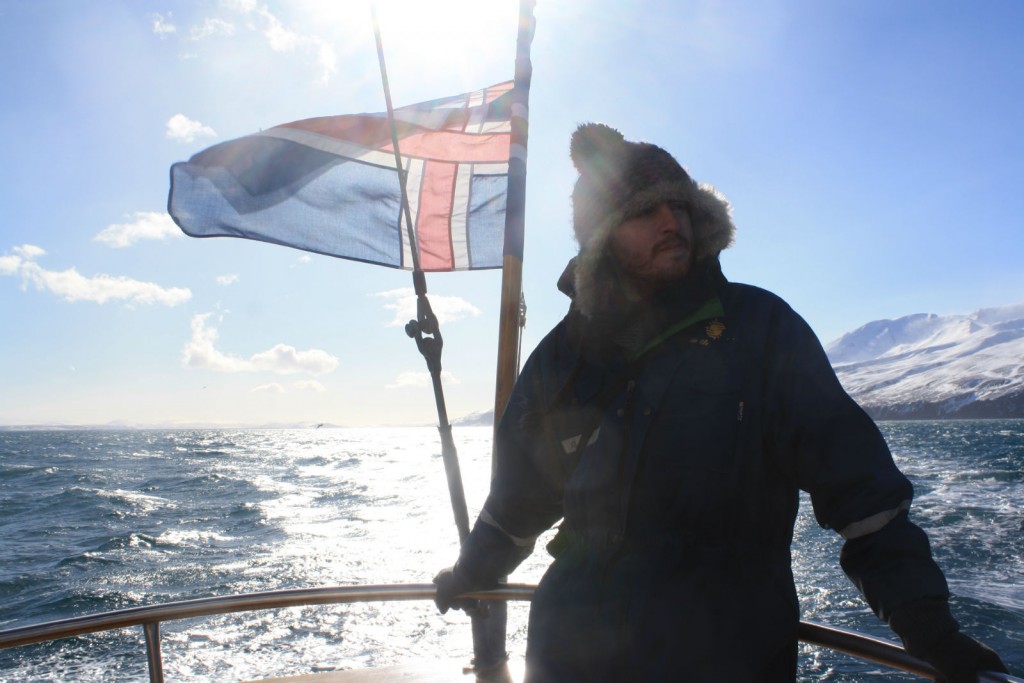 Presumably on one of the many voyages out of Husavik- in Iceland’s north- someone had made a complete mess of themselves- and our guide was adamant that would never happen again. The water was calm though and at any rate I was here to take in the sea breeze and hopefully catch sight of some sea life in the bay rather than spending the trip hurling the Icelandic yoghurt I had for breakfast that morning over the sides. 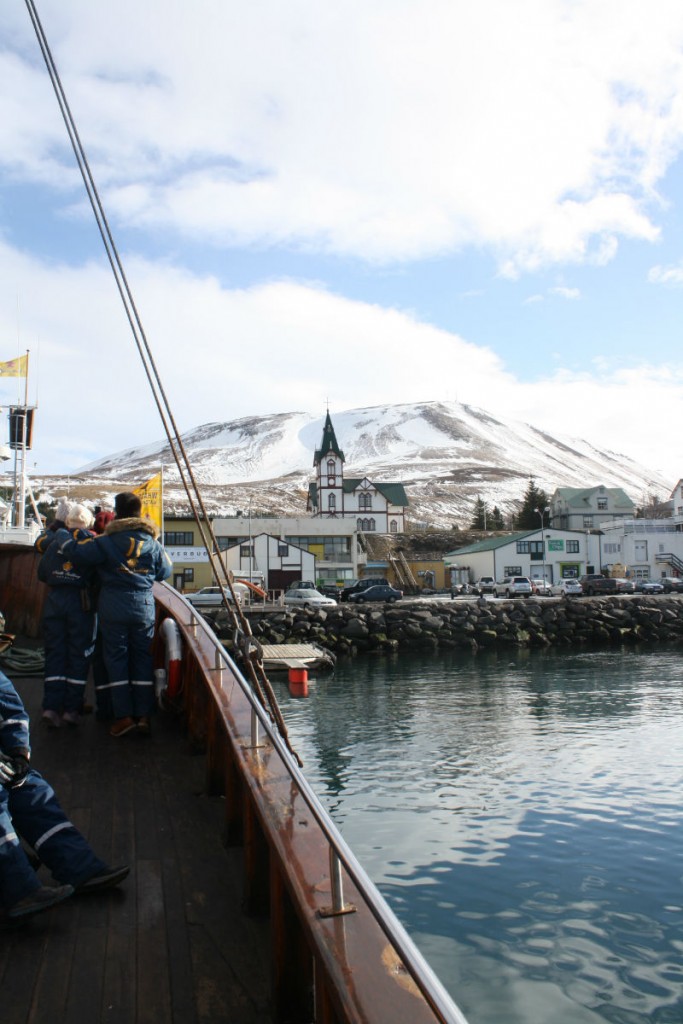 We left the port of Husavik, a fishing village which is gaining the thunderous reputation of being the ‘Whale Watching Capital of Europe’ to sail out onto the great ocean. Everyone on board was hoping that the day would live up to the rather aggrandized title of the town, but our guide quickly shot our grand dreams down in brutal fashion. This was only the second trip of the whale season- in early March- and the odds were low. He joked that we should have turned up in a few months time. Later on in the season, during summer, the area generally has a 99% record for sightings. Our chances though were slim to none. 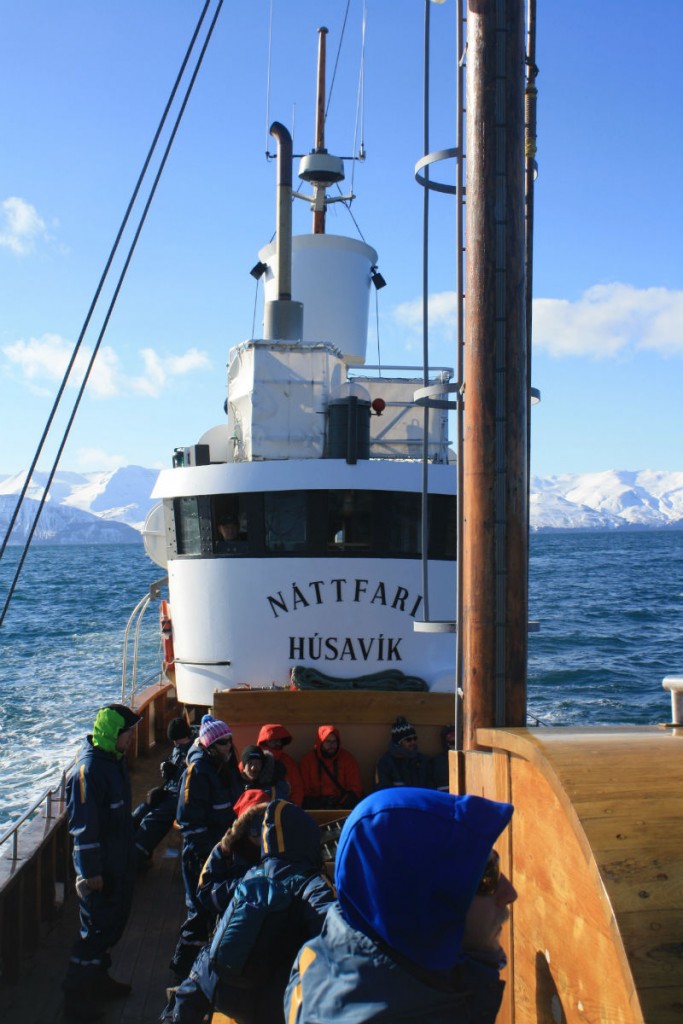 The boat we were on was an ocean worthy vessel of true magnificence. The Nattfari was an old fishing boat, perfectly built to cut quietly through the water and cause as little disturbance as possible. There’s a vast fleet of these wooden schooners in the Husavik harbour, all carefully restored by the whale watching companies in an effort to preserve their Icelandic legacy. Years ago these may well have been used to hunt the creatures we were looking for, but now their purpose was decidedly more peaceful. 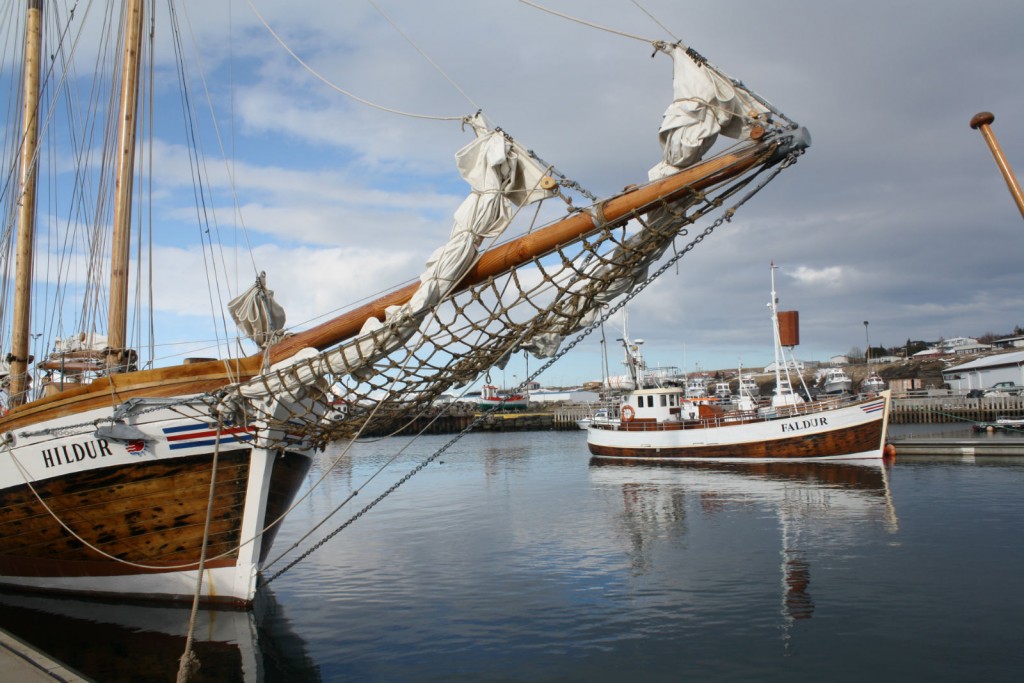 The low odds our guide had thrown down didn’t detract from the beauty of the Skjálfandi bay. Snow topped peaks enveloped us as gannets circled low on the water. To get all poetic, as Coleridge once said, it was as idle as a painted ship upon a painted ocean. Or some such line. 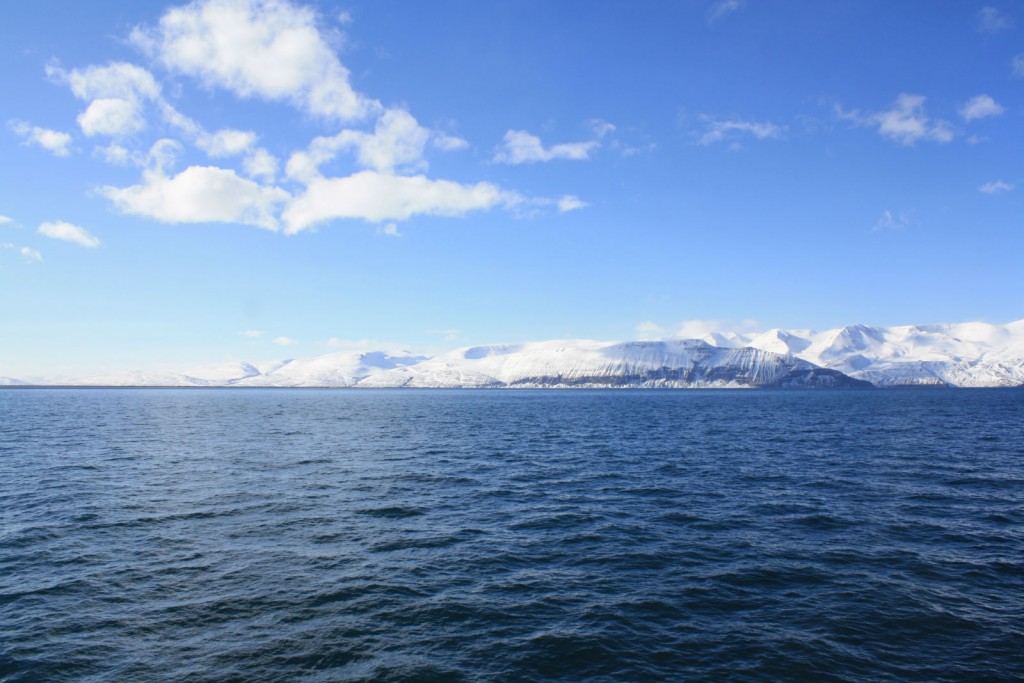 It was cold though. So cold we were given huge thermal suits by the crew to keep the chill away. I guess it’s the sort of weather you should expect when you are mere miles from the arctic. 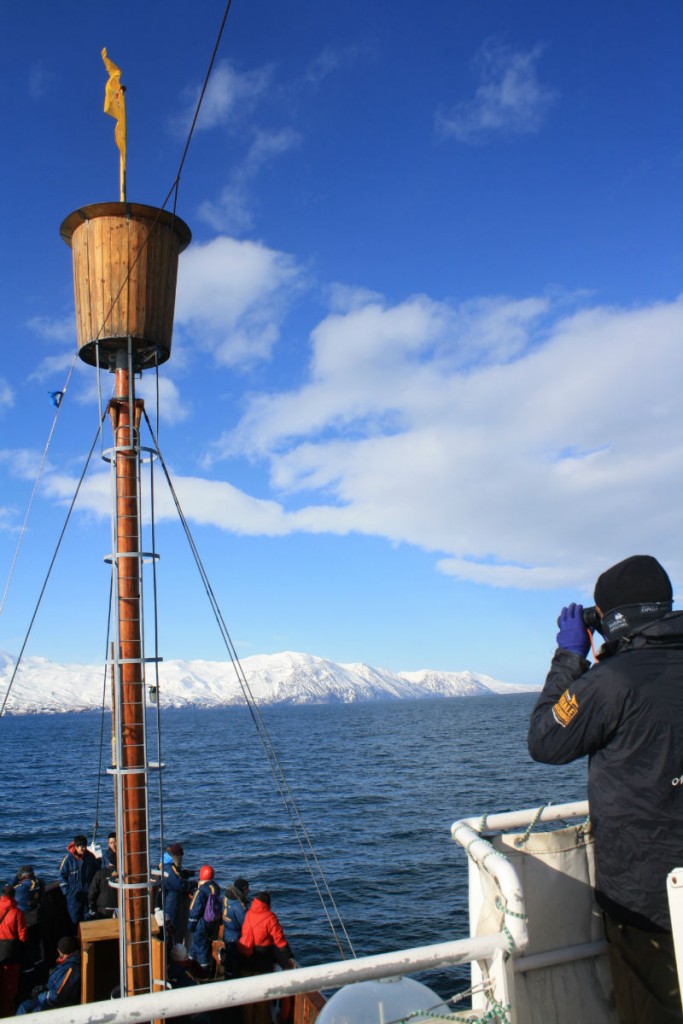 It might have been undeniably arctic for us, but the natural bay has ideal conditions for the whales to thrive. It’s calm, deep and in summer it’s full off fish. A few species even live here all year round. Up top on the boat we were scanning the horizon for tell tale signs of these creatures. Our pessimistic yet unbelievably knowledgeable guide had yet to crush all hope on board. I for one took his pessimism for sheer maverick suspense building.

An hour and a half into the trip and a few birds had been spotted. Our guide began regaling us with Icelandic culinary tips- puffin supposedly tastes a lot like liver and is best barbecued- when the boat made a sharper than usual turn to starboard. 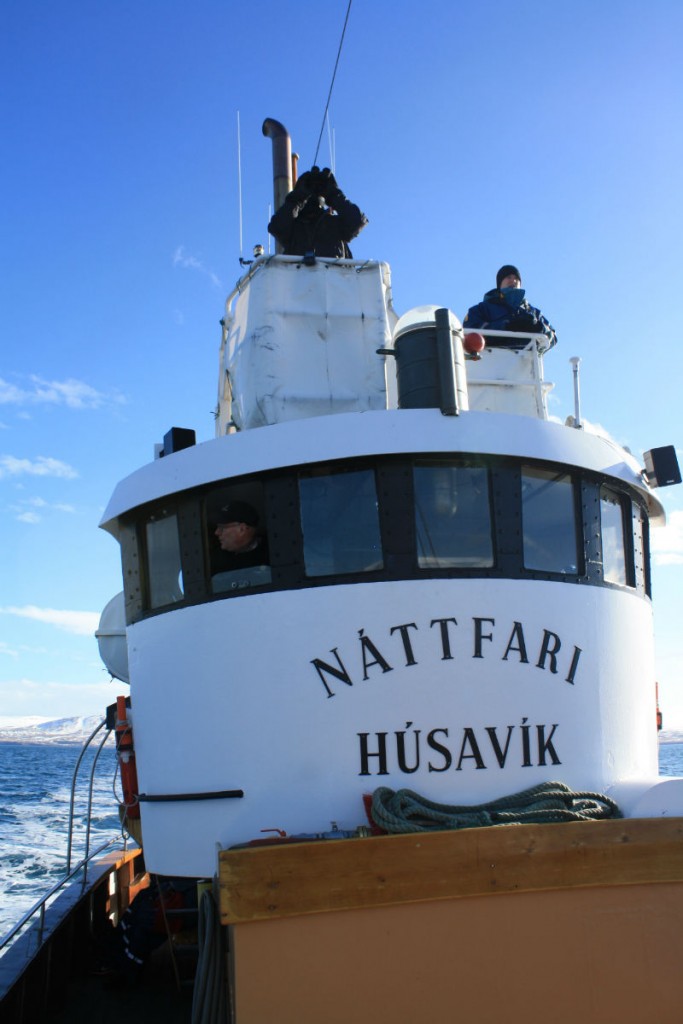 The skipper pointed out of his window and mid puffin tasting story our guide ran to the bow of the ship. The boat turned frantic as people rushed to follow him, wondering if another gull had been spotted or if we’d beaten the odds.

And incredibly, there in the distance was a small, black dorsal fin. 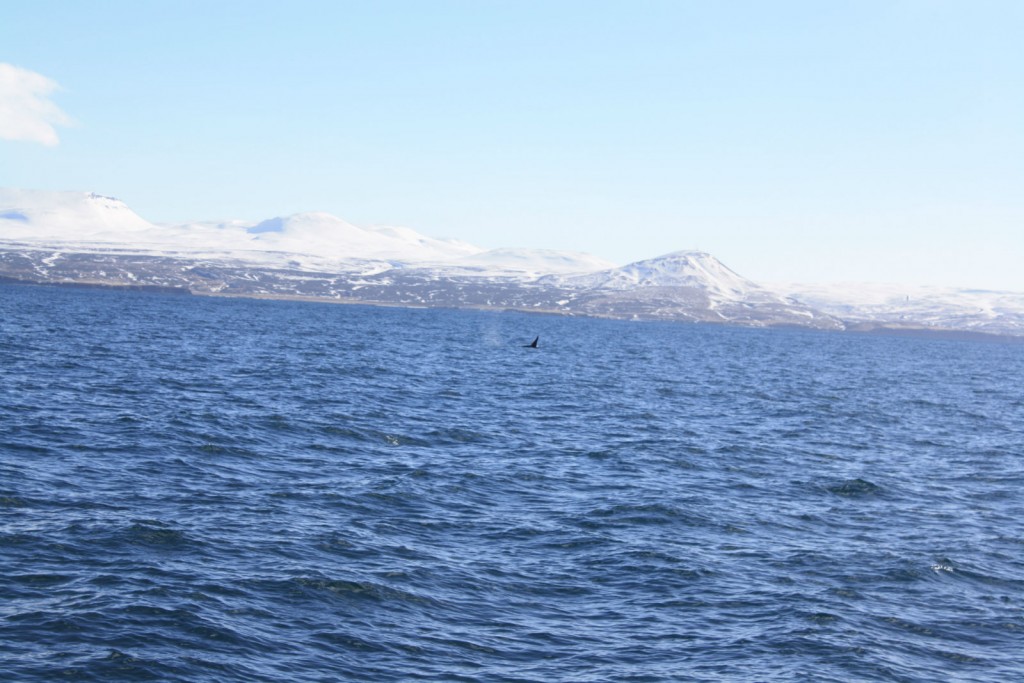 “Orca! Orca!”- the cries made their way around the boat as we edged closer. There was pandemonium as everyone rushed to get the best vantage point. Our guide was giving a running commentary of the action, almost in tears at the sight. And then it was gone.

‘In my seventeen years here I’ve only ever seen Orcas once in the bay’, he exclaimed to us all.

Then another Orca surfaced. This time much closer. 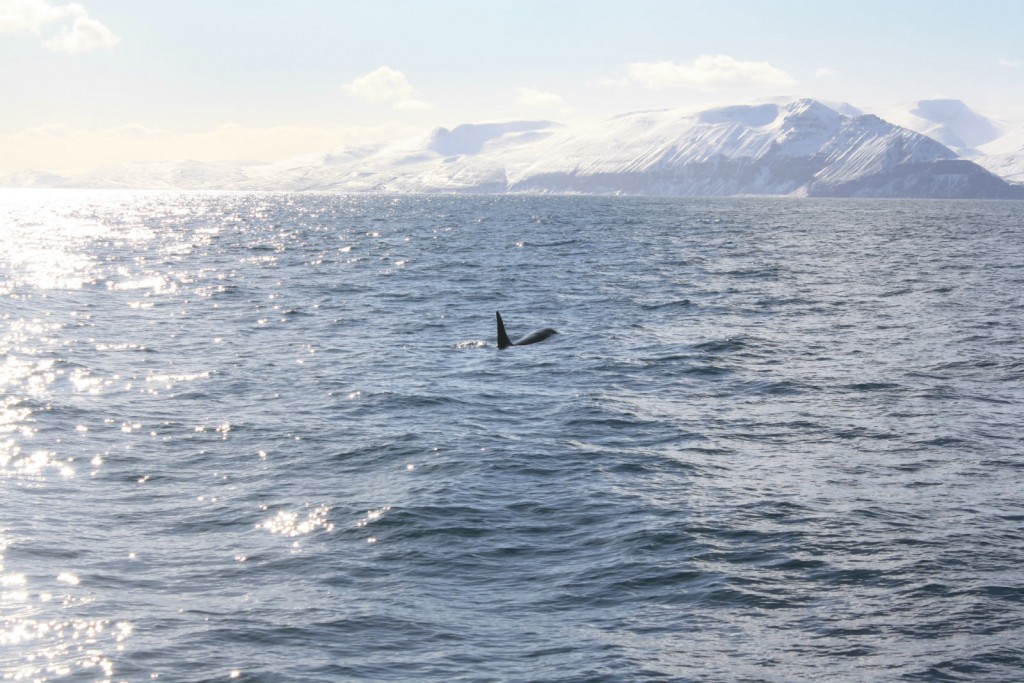 The skipper had maneuvered us into a small pod of Killer Whales. Around us, four or five of the animals kept surfacing and diving alongside the boat, getting closer and closer towards us. 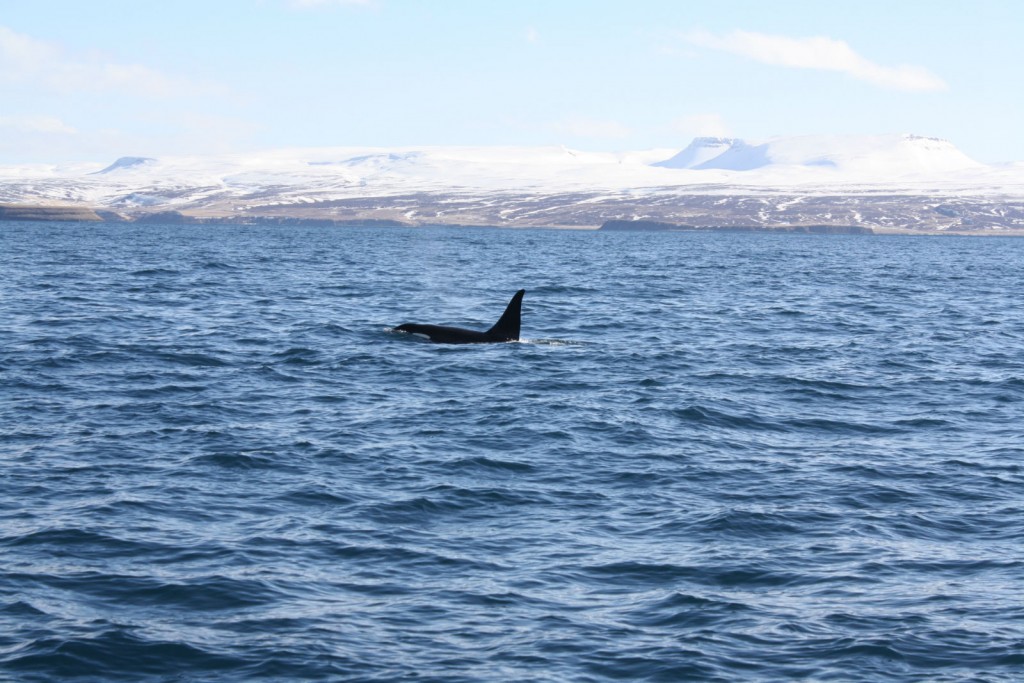 Each time an Orca breached the surface the boat became a flurry of camera shutters and animated yells of excitement. The crew and whale watchers were all in absolute awe of these elegant creatures. 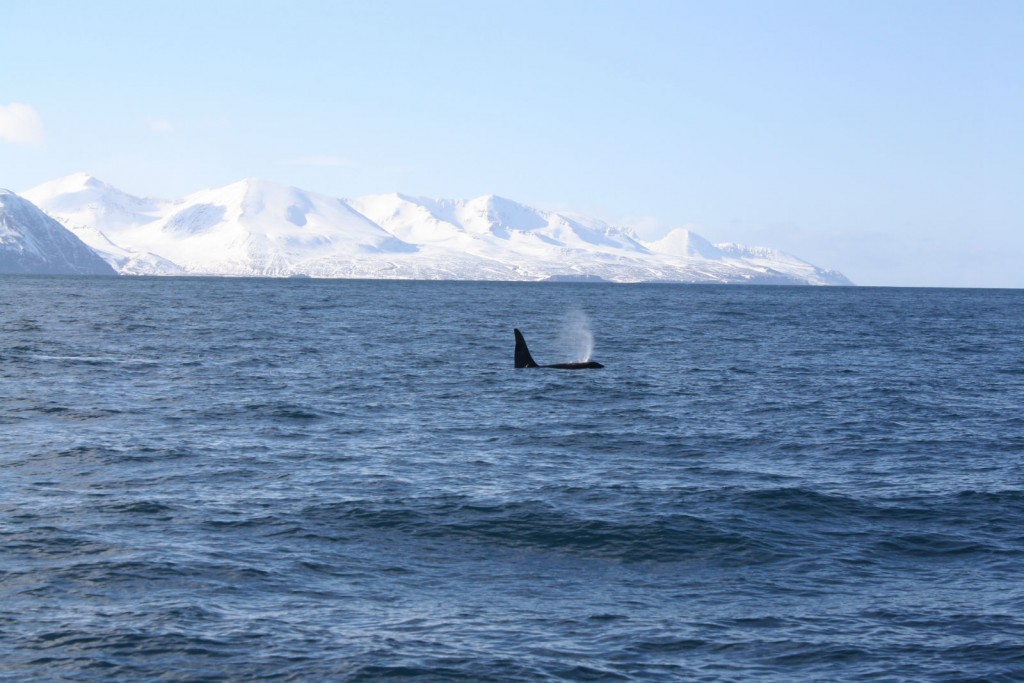 Killer Whales are renowned for their intelligence. They hunt in families, herding whatever prey they can find into traps to take them down. Their intelligence is only matched by their brutality. They are top of the marine food chain, humans aside.

They might bring back fond childhood memories of Free Willy leaping to freedom but the reality is that in the wild they are merciless predators, who even feed on other larger whales in the bay.

And they are a rare sight. Our chances of seeing any whale life had been low, and the chances of seeing Orcas even lower. But eventually they tired of us and gradually the fins got further and further out of sight, slipping below the surface and not returning. They’d given us a brief show, but one that would become etched in the minds of all on board. 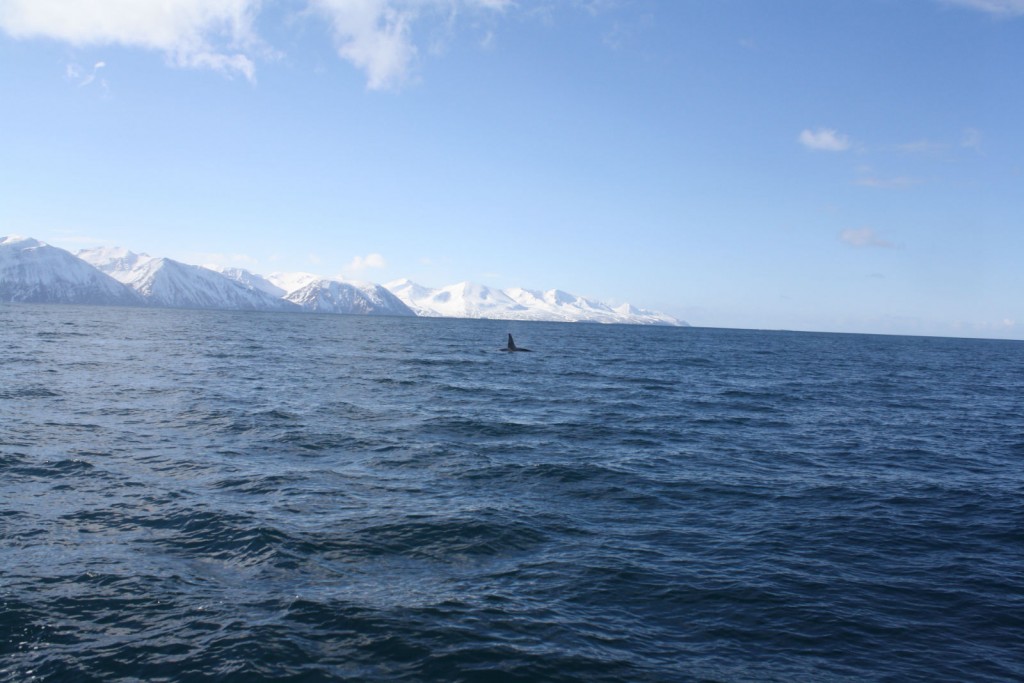 The Skipper turned us back to Husavik’s harbour as the Orcas went their own way. The cliffs rose in front us as we left the ocean swells behind and our guide- animated as always- proclaimed how he’d believed all along we’d see something great today. And, I guess, we had seen something out of the ordinary that day. And no one had  thrown up their breakfast either.

My whale watching trip was run by North Sailing. They operate a fleet of restored wooden schooners out of Husavik. On top of taking tourists out they also help with conservation and scientific research in the wildlife rich bay. And they have a great restaurant back in the harbour serving fresh fish and cold beer.

Husavik is in the far north of Iceland and it’s a great addition to any road trip round the island, but a long way from Reykjavik.

For a decidedly more controversial look on the topic of whales, you can read about Indonesia’s subsistence whale hunters of Lamalera right here.