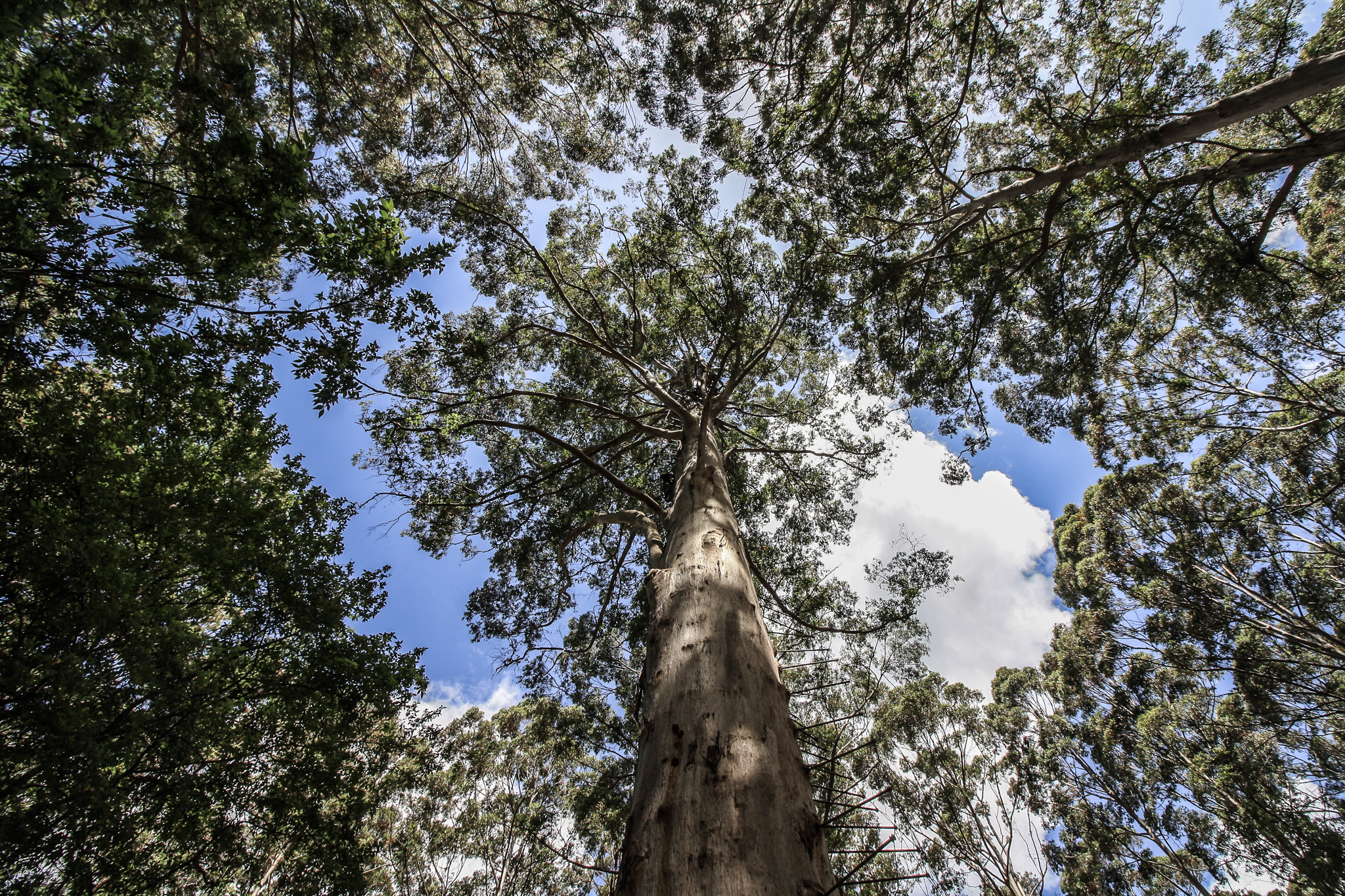 I looked up towards the dense canopy of the karri forest above me, and the Gloucester Tree stretched high above the branches around it towards the blue skies above.

This was the heart of Gloucester National Park in Western Australia, and I was about to force myself nervously upwards, to climb the 53 metres worth of iron rungs that snaked their way around the swaying trunk of this famous tree.

I wasn’t looking forward to the journey up, but at least from the top, I hoped that the view wouldn’t be half bad.

The Gloucester Tree is just one of the hundreds of thousands of tall, and in many cases, ancient trees that make up the vast Karri Forests of southwestern Australia. This is one of the most unique places in the world because it’s only in this south-west portion of Australia that these immense trees grow. It’s a one of a kind ecosystem, and the trees stretch from Denmark on the south coast north to Margaret River.

Karri trees are tall at the best of times, and the tallest of them can reach the staggering height of 90 metres. A type of Eucalypt, these are the tallest trees in Western Australia, and some of the tallest in the world. Some of the trees are hundreds of years old too.

Many of the towns in the southwest were founded originally as logging settlements in the late 19th century, as Europeans began arriving in the region and began to take advantage of the vast abundance of timber that the tall karri trees could provide.

It became a lucrative and prosperous trade, and despite protest groups working against the loggers, it’s a trade that does still continue today.

But many of the logging towns, such as Walpole and Pemberton, which are found in the heart of the forests, have also turned to tourism, for trade and as a means to protect the forests. There are national parks spread throughout the forests, and at Walpole, you can visit the famous Valley of the Giants Tree Top Walk.

This easily accessible walkway takes you up to 40 metres into the canopy of the surrounding karri forest, but this wasn’t where I was going to get my karri forest experience. Instead, I was heading to Pemberton, where within the boundaries of Gloucester National Park you can find trees like the Gloucester Tree, which rises to over 50 metres in height, or the Dave Evans Bicentennial Tree, which reaches a staggering height of 75 metres, and where the brave, or perhaps foolhardy, can risk the metal-runged climb to the top.

Gloucester National Park is found just a few kilometres outside of Pemberton, a town founded by loggers, but a place that’s infamous amongst backpackers now for its strawberry picking jobs and farm work. There’s no other reason to visit Pemberton except for the karri trees, or if you’re desperate for farm work while on your working holiday visa.

The national park is hardly the largest in Western Australia – it has nothing on the likes of Karijini National Park in the north for instance – which is a shame, given the vast forests that surround Pemberton that could well also be protected, and preserved.

There are more state forests and national park across the south-west region though, but Gloucester National Park is best known for being the home of what is perhaps the most iconic, and historic tree in Western Australia.

In Gloucester National Park, I stood under the shadow of the Gloucester Tree, watching apprehensively as the branches high above swayed in the light breeze, and as the entire canopy seemed to move with the wind.

It was hardly even a windy day, but given that the Gloucester Tree stands at an ungainly height of almost 60 metres, every movement seemed to be accentuated. A long string of metal rungs, encased in a rustic wire mesh, spiralled from the base of the tree to the top. This was the only way up or down, and there was barely room for two people struggling in opposite directions to pass one another on this makeshift ladder.

The Gloucester Tree is one of the many trees in the southwest that were used as fire lookouts.  With its intense, dry summers, the southwest is prone to forest fires, and the karri forests are in essence, just one big tinder box waiting for a spark. In 1947, the Gloucester Tree was turned into one of these fire lookouts, and it was named after the Duke of Gloucester, who paid it a visit

The Gloucester Tree is 58 metres tall, and the fire lookout was constructed at 53 metres, ensuring that there are 53 metres worth of metal rungs to cling onto as you climb ever higher up the tree.

The great karri trees are no longer used as fire lookouts though, given the newer and safer technologies available today. No longer do fire rangers have to climb to the top of the shaky lookouts and spend days above ground watching out over the sea of green trees in nervous anticipation of a plume of smoke heading their way.

Instead, the Gloucester Tree is open to anyone brave enough to venture up to the metal viewing platform that’s found near the top.

I didn’t come all this way just to stare at the tree, and after summing up the courage below, I began the long climb to the summit. The rungs twist their way around the trunk, but with every step, I could see the forest floor below, whichever so slowly began to appear more and more distant.

People were coming up and down all the time – some turning back when the ascent became too harrowing, and others scrambling down to the bottom again after having reached the top. At times, on the narrow rungs, I was pressed against the mesh canopy or against the Gloucester tree itself, to let people pass. Here’s no safety harness or net to catch you if you, if you slip.

I struggled ever upwards, and when I pulled myself up the final leg, onto the metal viewing platform, I was rewarded with a view across the entirety of the forest, stretching seemingly endlessly towards the horizon.

The viewing platform was sturdy, but even so, at this height, I could feel every movement of the wind as it caught the tree in its grasp. The platform swayed almost continuously, and after taking a few shots of the canopy, with little hesitation, I was ready to turn back and begin my descent to ground level again.

For the first stretch, the descent proved just as precarious as the ascent, and again, I was passing by other climbers and staring in horror at the floor far below as I made my way, step by step, and run by rung, down the Gloucester Tree.

The Gloucester Tree is just one of many karri trees that were used as fire lookouts during the mid 20th century, and close to Pemberton, you can find many more of these tall trees.

After climbing the Gloucester Tree, I drove over to Warren National Park, where the Dave Evans Bicentennial Tree is found.

After the first climb, I was feeling more confident, but the Gloucester Tree would prove to be just a warm-up. Staring up at the Dave Evans Bicentennial Tree, so named because the local government had the bright idea to peg the lookout for tourists as some sort of a bizarre celebration of Australia’s 200th anniversary – I soon realised that this tree, was much taller.

In fact, the Dave Evans Bicentennial Tree stands at a mammoth 75 metres in height, and it proved to be an even more arduous climb. At this point, I was more used to the metal rungs and the swaying of the tree and I made good progress. The upward climb is long enough to warrant a secondary viewing platform at the halfway point though, which actually makes for a good rest point as well as a passing point for climbers. If you’d have enough, you could enjoy the view here and then turn around. I carried on upwards though.

Ominous warnings at the halfway point made it a point to tell climbers not to continue in strong winds and rain, while also warning that the rungs became almost vertical.

This wasn’t a lie, and the last sections to the top of the Dave Evans Bicentennial Tree were essentially a vertical ladder, with a sheer drop below. The views from the platform at the top though, weren’t half bad.

Until recently, it was possible to climb another of the old fire lookouts too, but the equally famous Diamond Tree, which rises to a height of 49 metres, was recently closed due to safety concerns.

When I visited in 2017, the Diamond Tree was very much open for climbing, but it seems that now, the tree has been worn down over time, and it’s structural integrity compromised.

Back then I didn’t actually climb the Diamond Tree – perhaps a good thing, knowing now that it’s closed! After already summiting two giant karri trees that day, and with the light starting to fade, I’d had enough. There’s only so much karri tree climbing a man can face in one day alone.

You can still stand beneath the Diamond Tree today, and there are several walking trails through the forest here, so it’s still worth calling into when you are exploring the south-west karri forests.

These three Karri Trees, including the iconic Gloucester Tree and the terrifyingly tall Dave Evans Bicentennial Tree, are all found within the southwest region, and within easy driving distance of Pemberton.

The Gloucester Tree is within Gloucester National Park, the Dave Evans Bicentennial Tree is found within Warren National Park, while the Diamond Tree – now closed for climbing – is found just off the main Southwestern Highway, close to Manjimup, that runs all the way from Perth. You’ll need to pay national park fees when entering national park areas.

From Perth, it’s at least a 4-hour drive down south to Pemberton, so it’s not exactly a day trip from the state capital. From Albany, it’s around 2 and a half hours drive to the karri forests.

You can easily make Pemberton and Gloucester National Park a stop on a road trip itinerary from Perth to Albany if you travel via Margaret River. There’s almost no public transport in these parts, so you really need your own vehicle to get around and see the trees.

Travelling to Gloucester National Park? Sign up for Air BnB to book your accommodation using this link HERE and you’ll get £25 free credit towards your first booking!