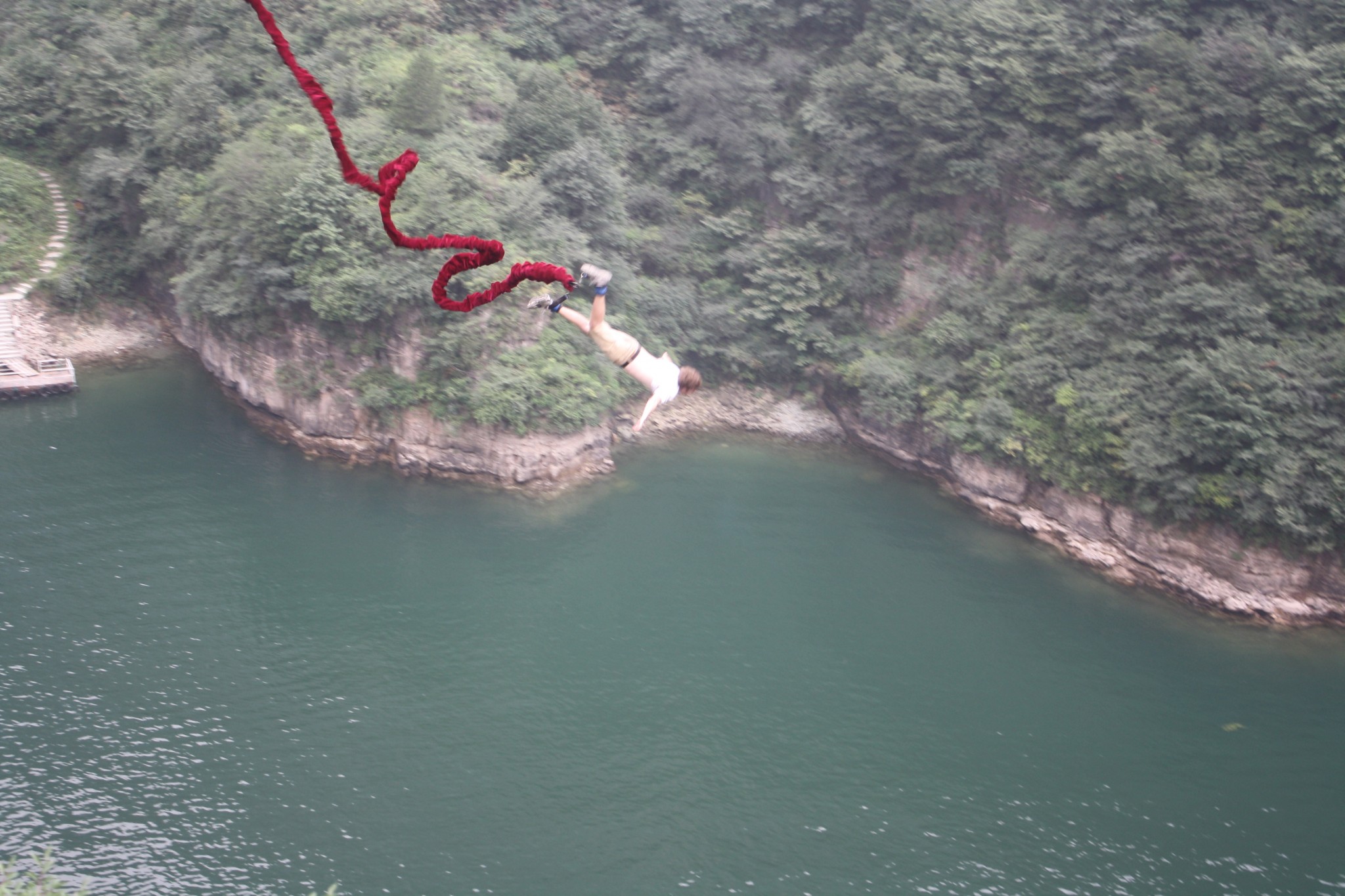 As epic as the name suggests, this man made spectacle is still on few itineraries. I found myself on a turquoise river, beneath towering cliffs, as Chinese tourists challenged me to bungee jump into the gorge itself. 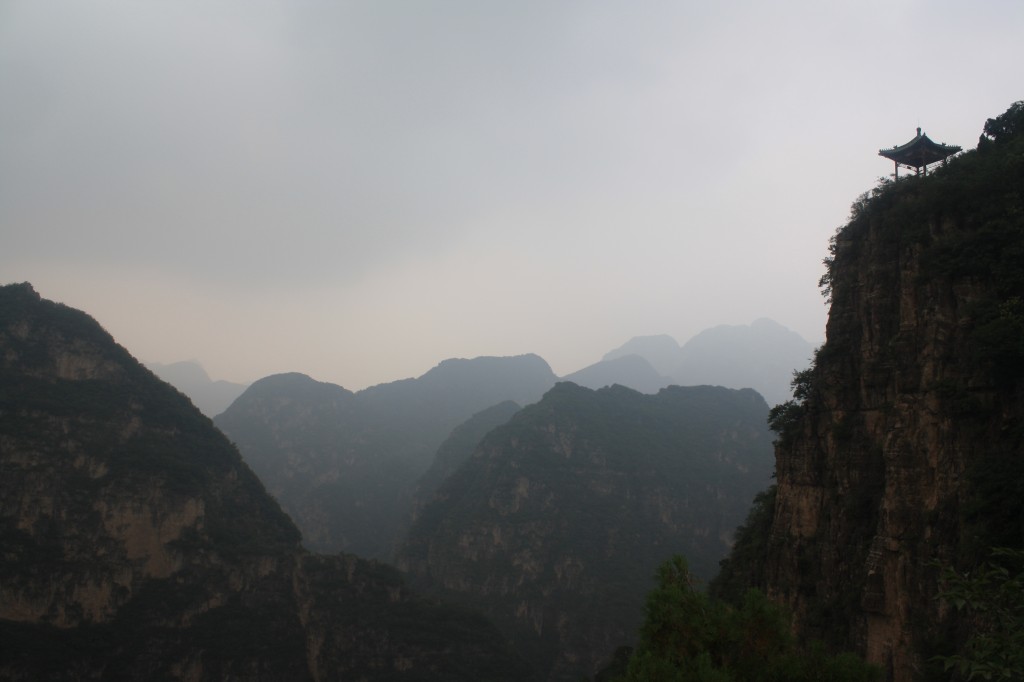 You’ll find Dragon Gorge about 50 miles from Beijing; it will take a few buses to get there and no one will really know where you are talking about, but get there and you’ll find a suitably Chinese attraction. Incredibly scenic, yet full of frivolities. There’s even a dragon escalator and just like the Great Wall of China at Badaling, a cable car ride. 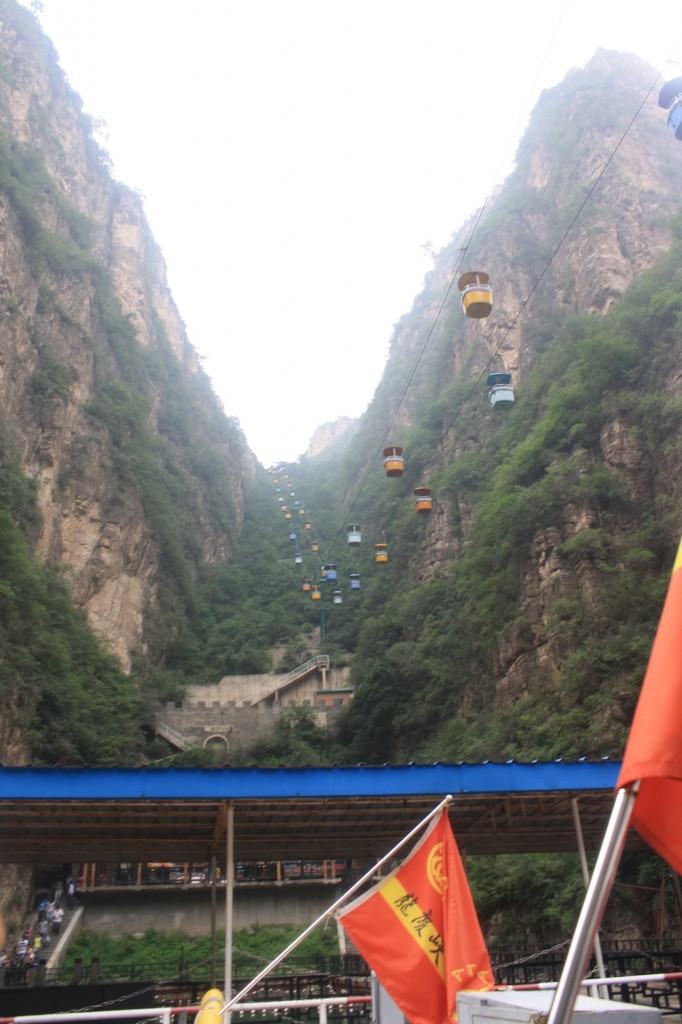 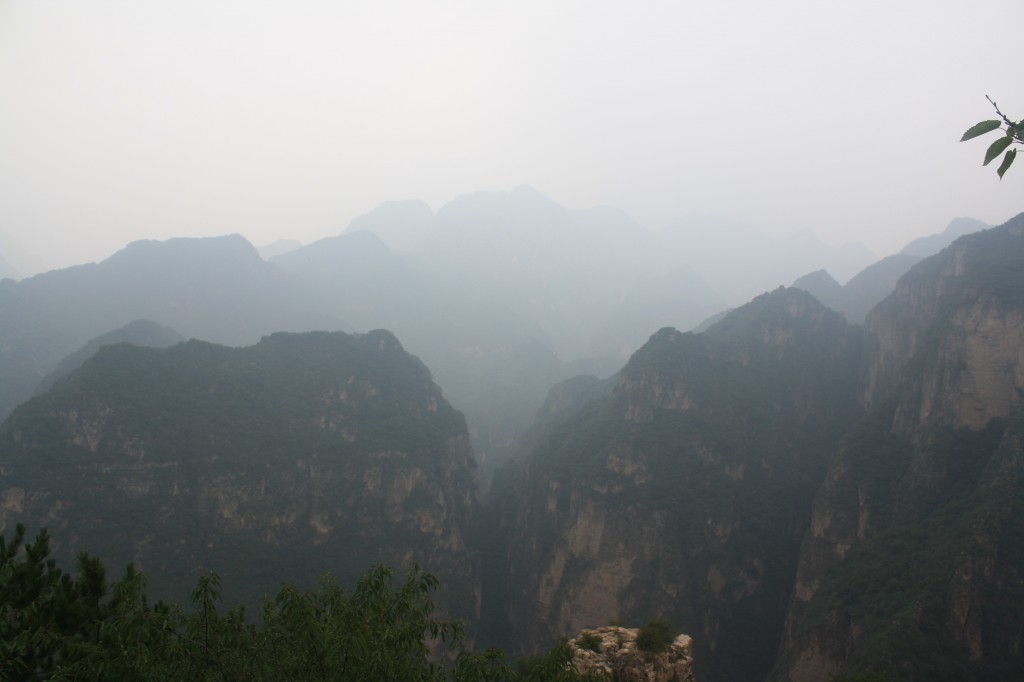 Once inside Dragon Gorge, you can climb- or take the cable car if you’re feeling lazy, or the Chinese smog is getting to you- to a shrine at the top of a peak for some cracking views. 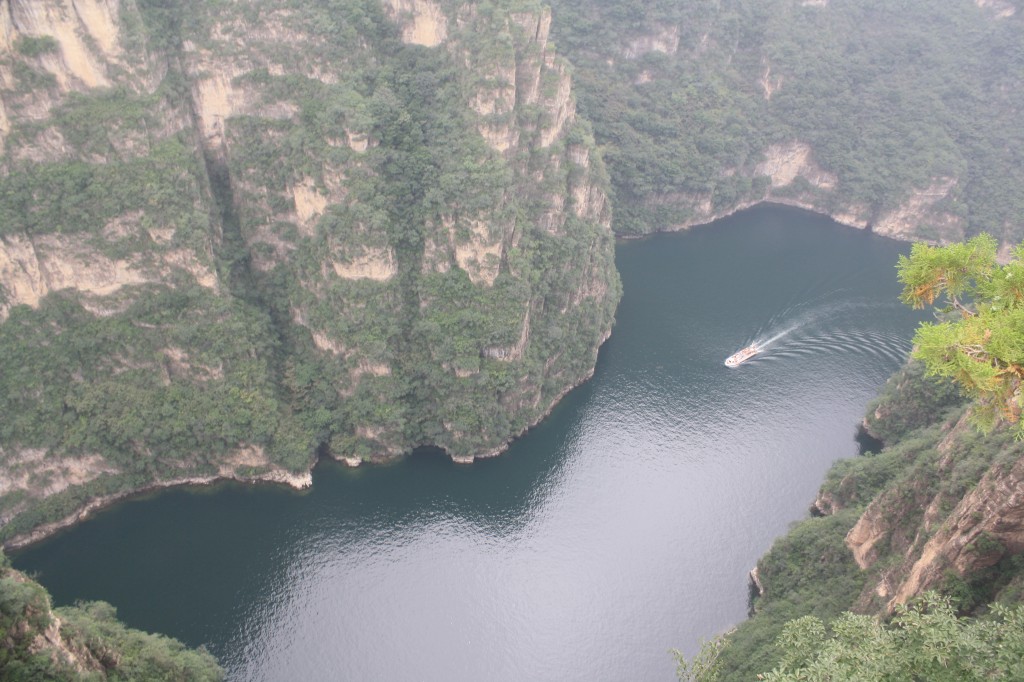 After an exhausting hike up the cliff side, it was then time to take a boat out onto the water, and see what else this place had to offer. 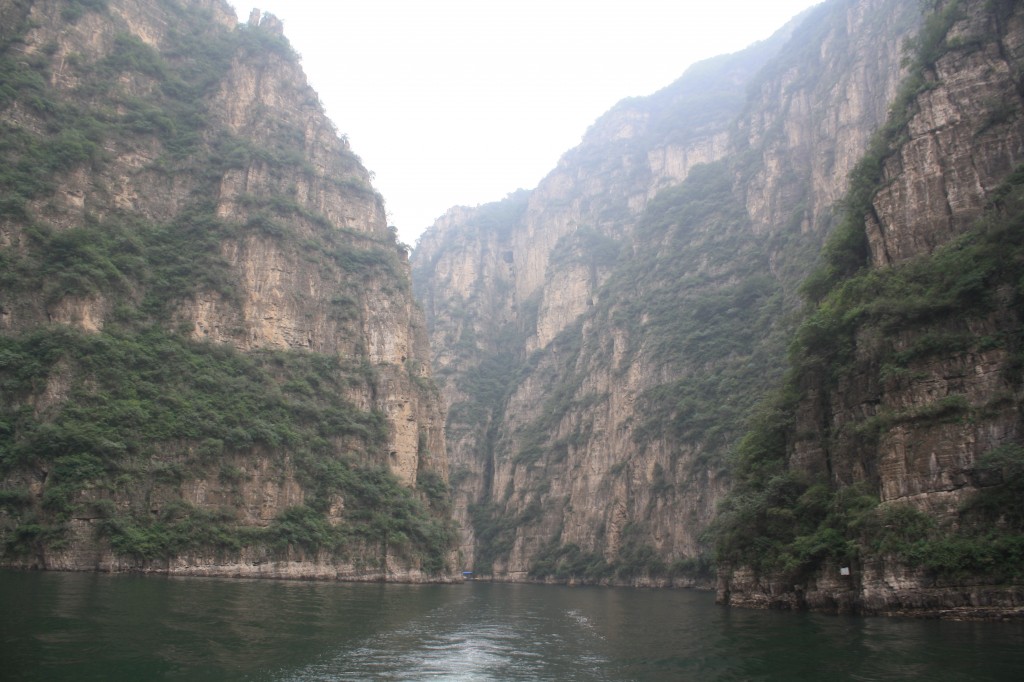 The boat in the picture below sped past us, and everyone on board with a camera stood up and started rapidly photographing in our direction. Westerners in the gorge were more exciting it would seem than the ride around it for these guys. 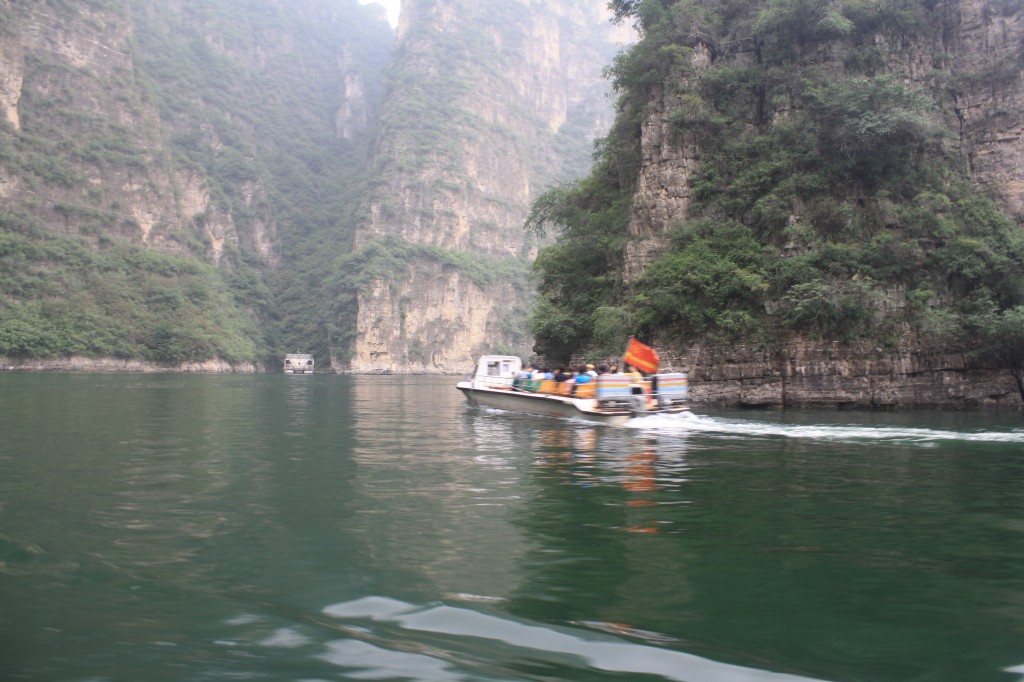 There was some pretty weird stuff going on around the corner too. 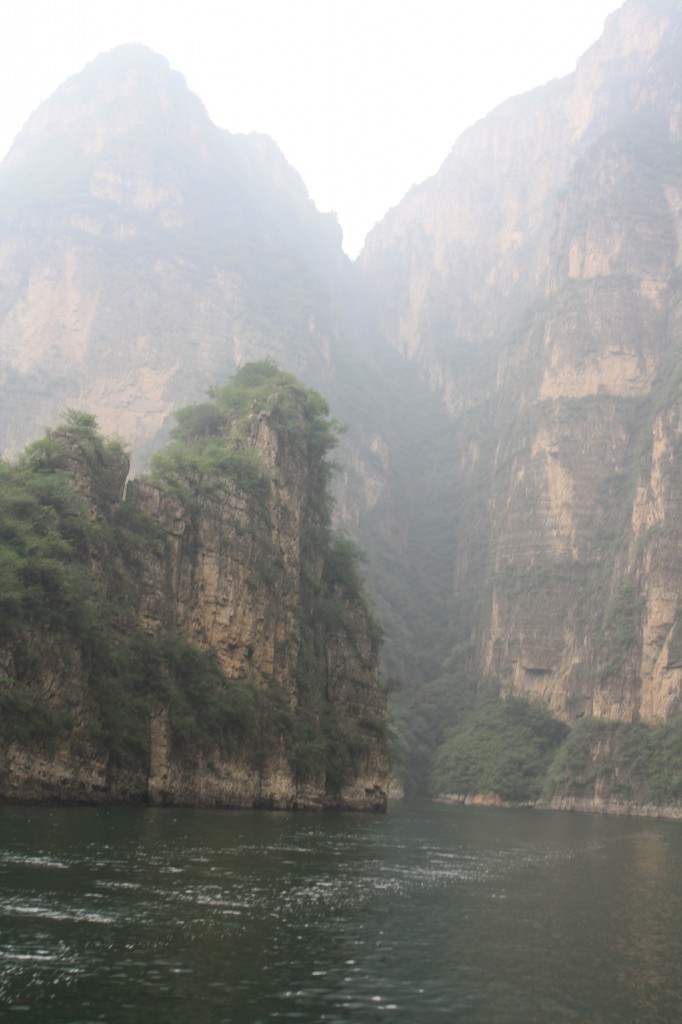 Although anyone who’s spent any amount of time in China will agree that weird becomes a subjective concept pretty quickly. 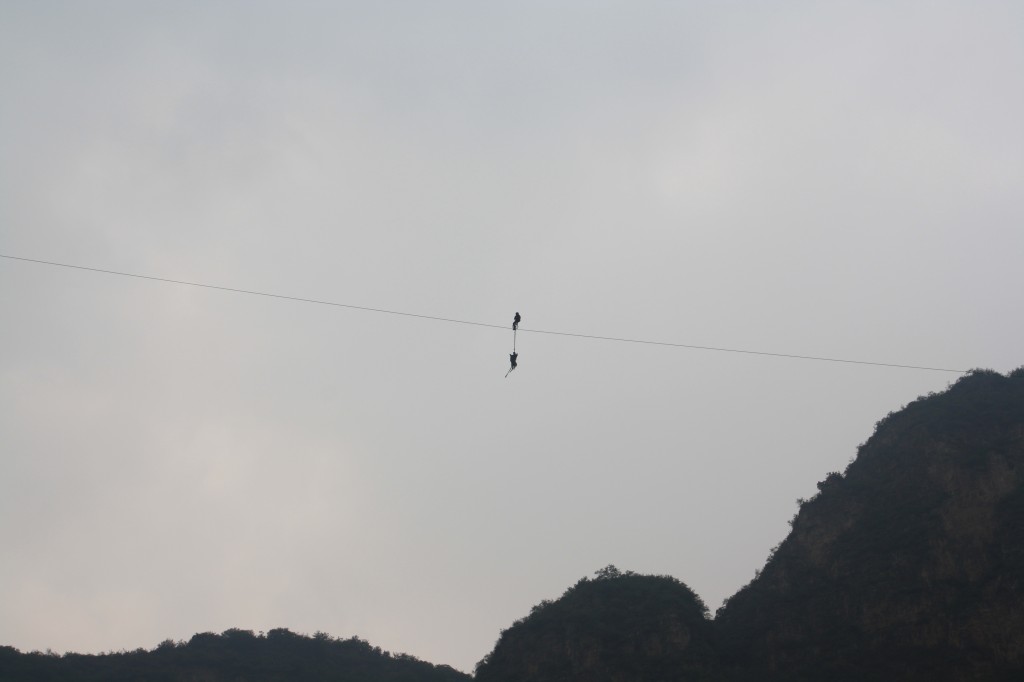 One man dangling from another man riding what appeared to be a unicycle and somehow balancing across a tight rope, that’s pretty weird though right? 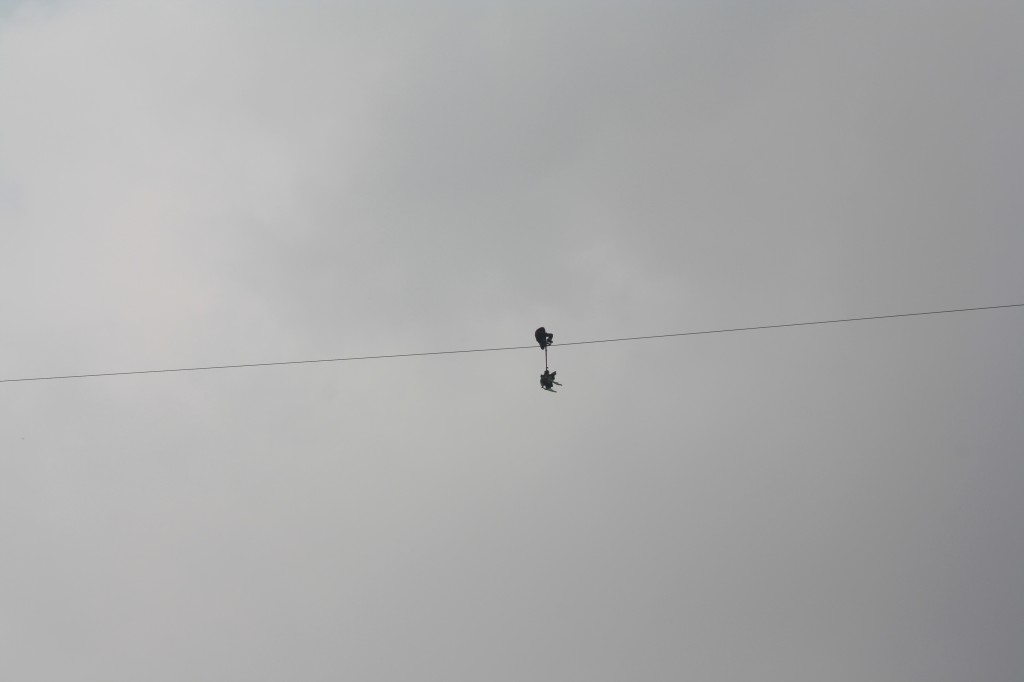 At the very least it was definitely unexpected. Everyone else on the boat seemed to take it in their stride and were happily snapping pictures of the cliffs again before we were even past the acrobats. 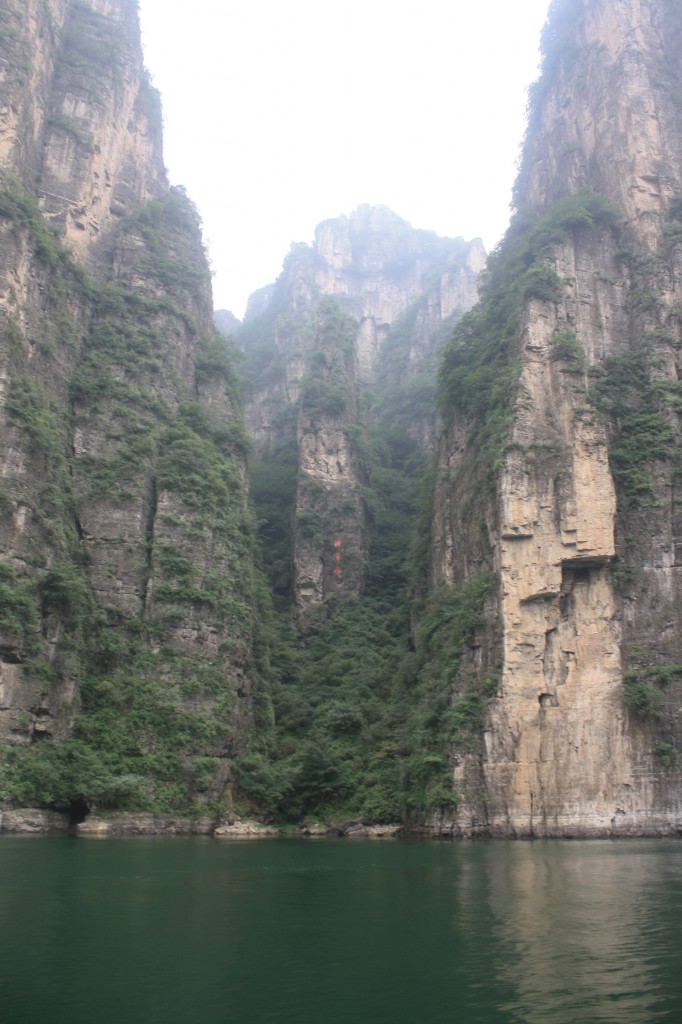 The boat kept sailing, but soon the sound of screaming reached our ears. 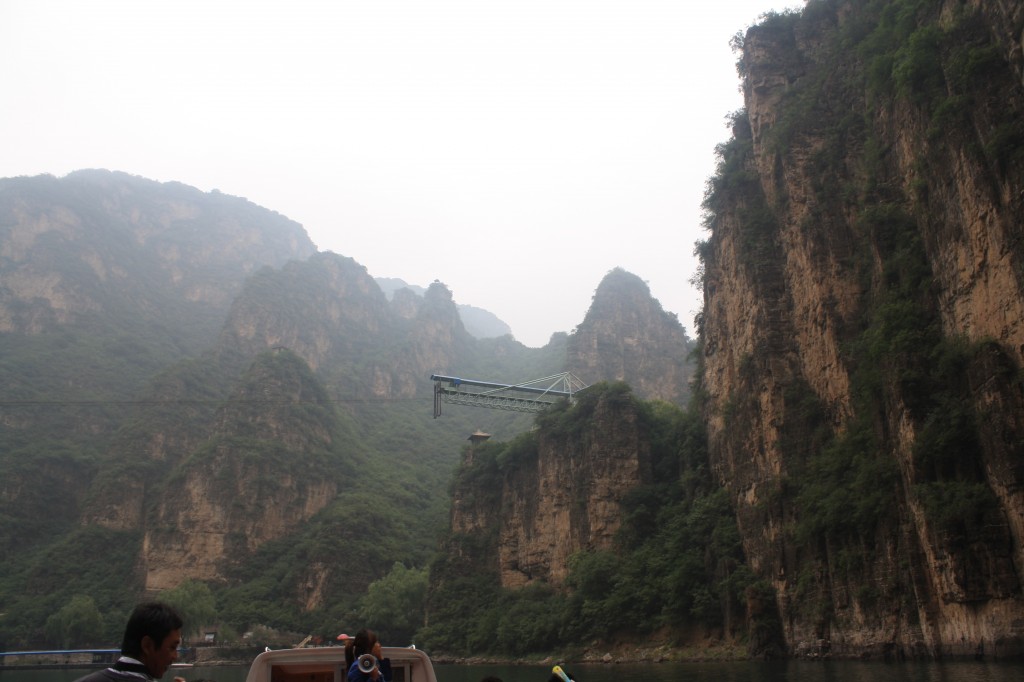 No, the unicycle men hadn’t fallen from their precarious tightrope, there was in fact a bungee jump platform protruding from the cliff face and a man, presumably the source of the screaming, was being fished out of the water by men in a rowing boat. 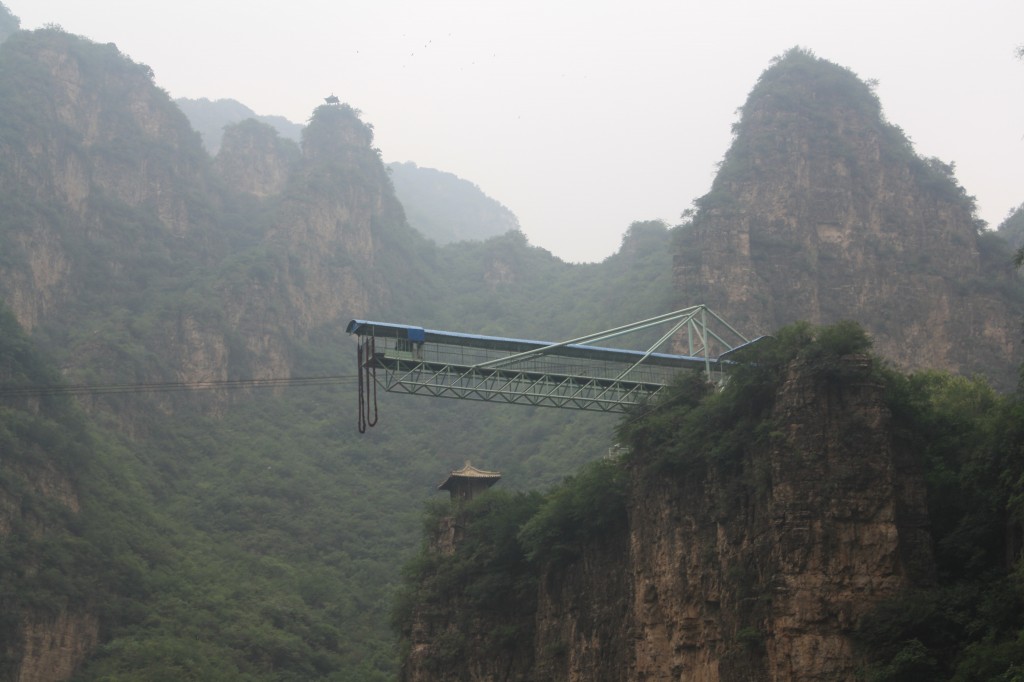 I soon found myself being challenged to leap off the cliff. The Chinese guys on my boat were pointing at the platform, evidently excited by the sight of it. Then they were pointing at me and telling me in broken English that I should go first. The only thing more amusing I suppose, than a Westerner on a boat in the gorge, would be a Westerner doing a bungee jump into the gorge.

Why not though, I thought, it’s not every day you find yourself in Dragon Gorge. And I certainly hadn’t expected to be bungee jumping. 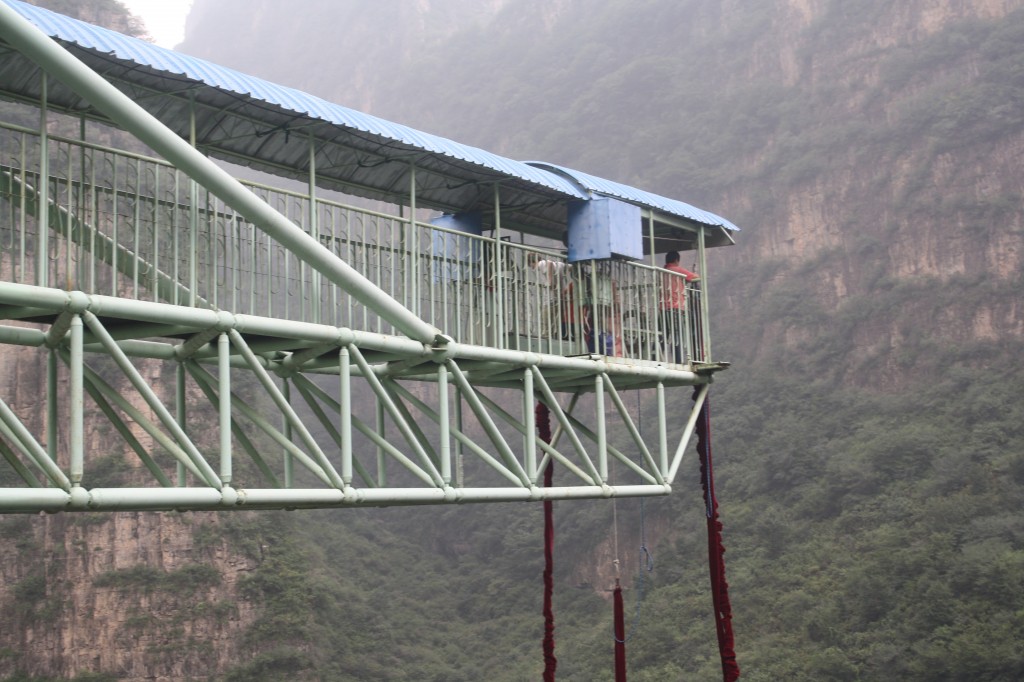 I soon found myself standing on the precipice above the gorge, wondering what the hell I was doing. The man running the whole operation had gone for a nap since the last jumper, who I can only assume had survived, and his colleague had to roughly kick him awake.

Bleary eyed he strapped the bungee cord around my ankles and pointed to the platform edge. It was too late to turn back now though, I had to put all my faith in Chinese engineering.

Oh, and did I mention I’d paid all of 150 Yuan, or about 15 entire English Pounds, for this terrifying privilege? 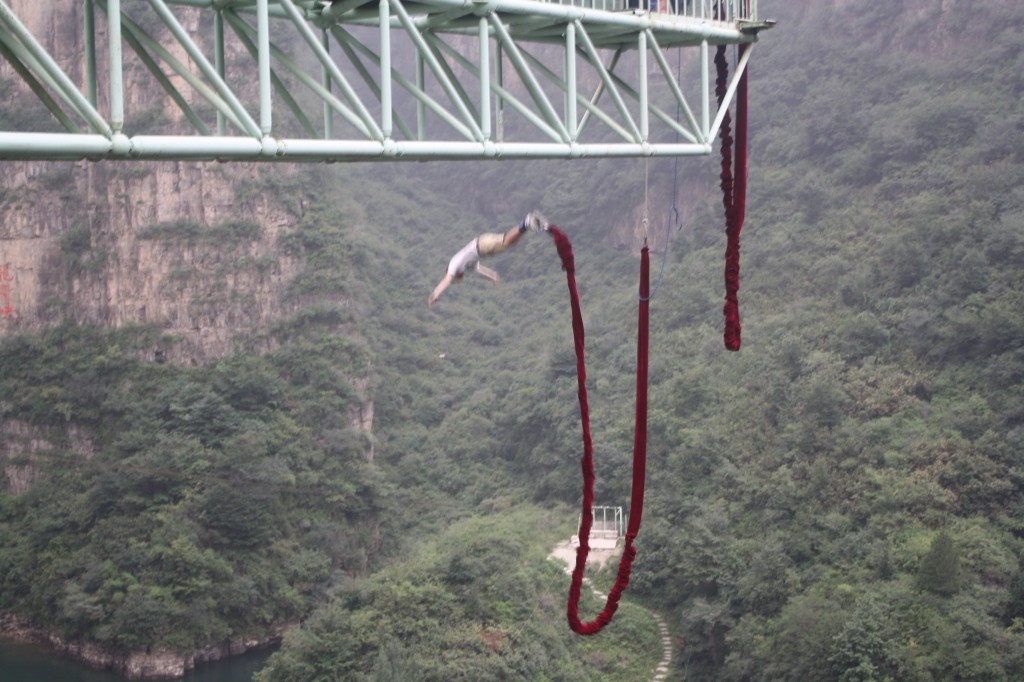 I like to think that I gracefully dived into the abyss. In reality I awkwardly toppled head first first over the edge while yelling expletives. 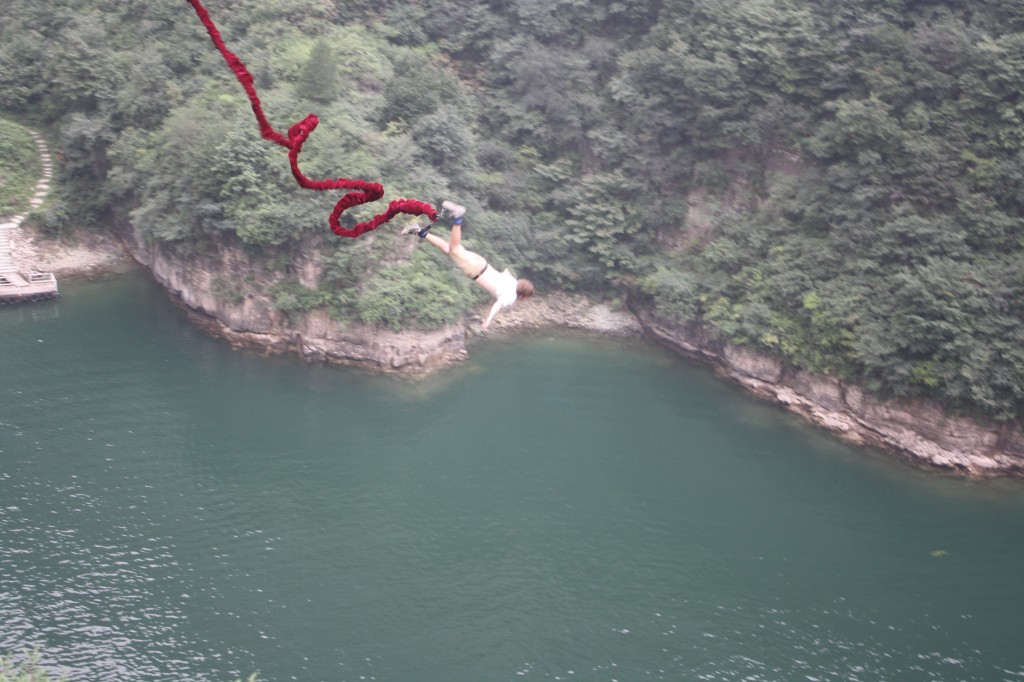 But the bungee cord held true and I soon found myself dangling in the basin of Dragon Gorge while people in passing boats furiously photographed me. 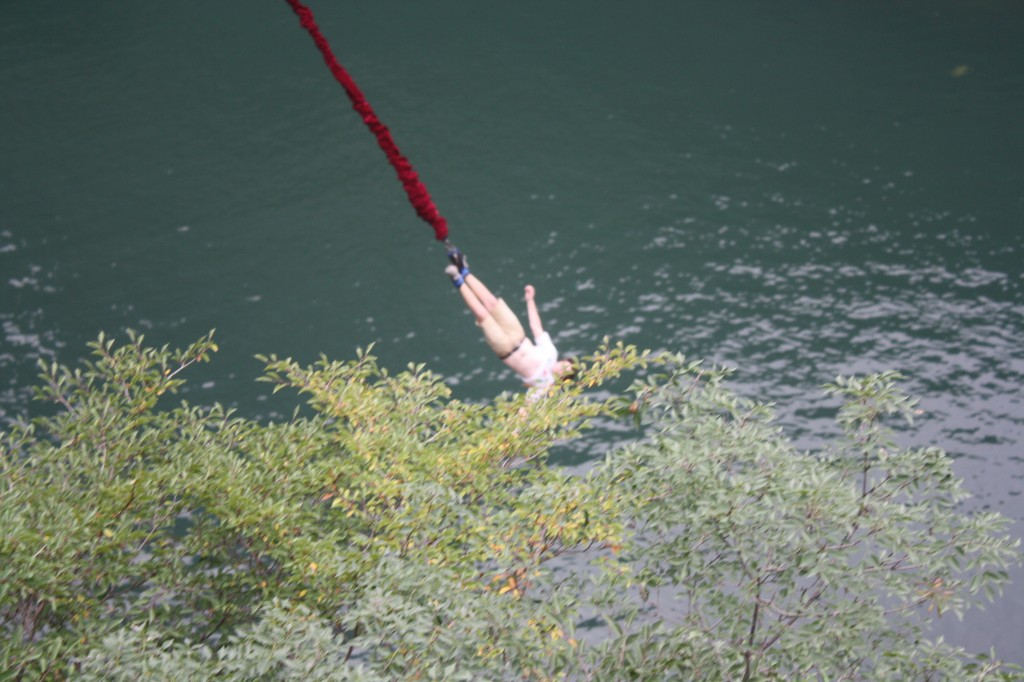 Left swinging above the water, I waited for the little row boat to reach me. They dragged me down and manhandled me into the boat, before taking me to the dock, shaken but definitely alive.

I was then mobbed by the passengers from the boat, showing me all the pictures they’d taken of me gloriously bouncing around on the end of the bungee rope.

Then I found Chinese Bambi, just relaxing by the bungee jump. Casual. 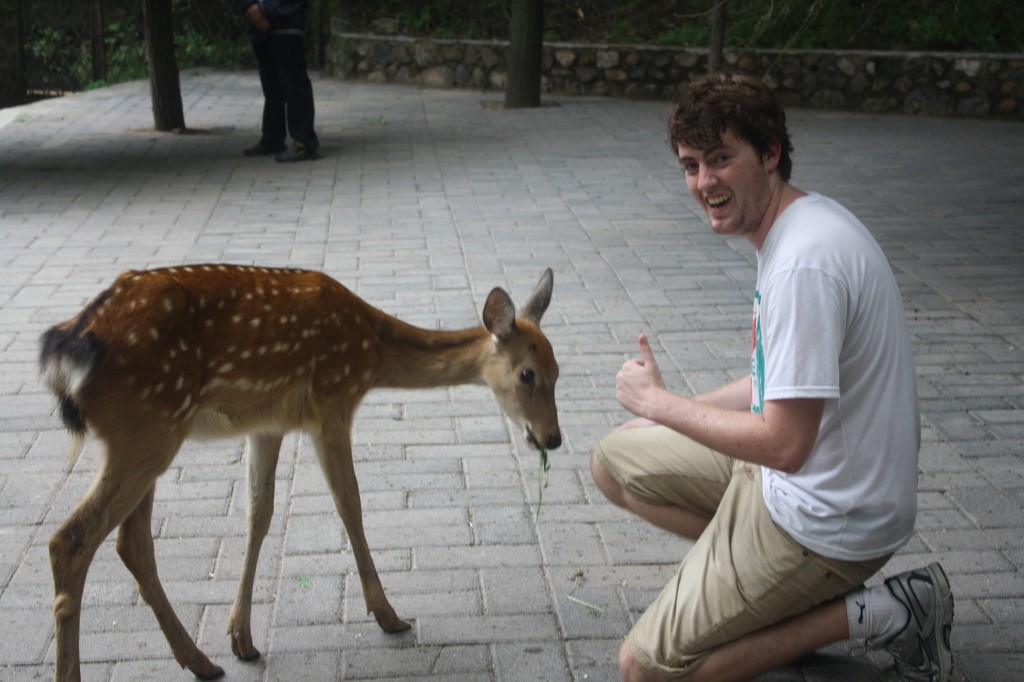 Right about now, I thought it was probably about time I found my way out of this Dragon Gorge place before events could take any more bizarre turns. 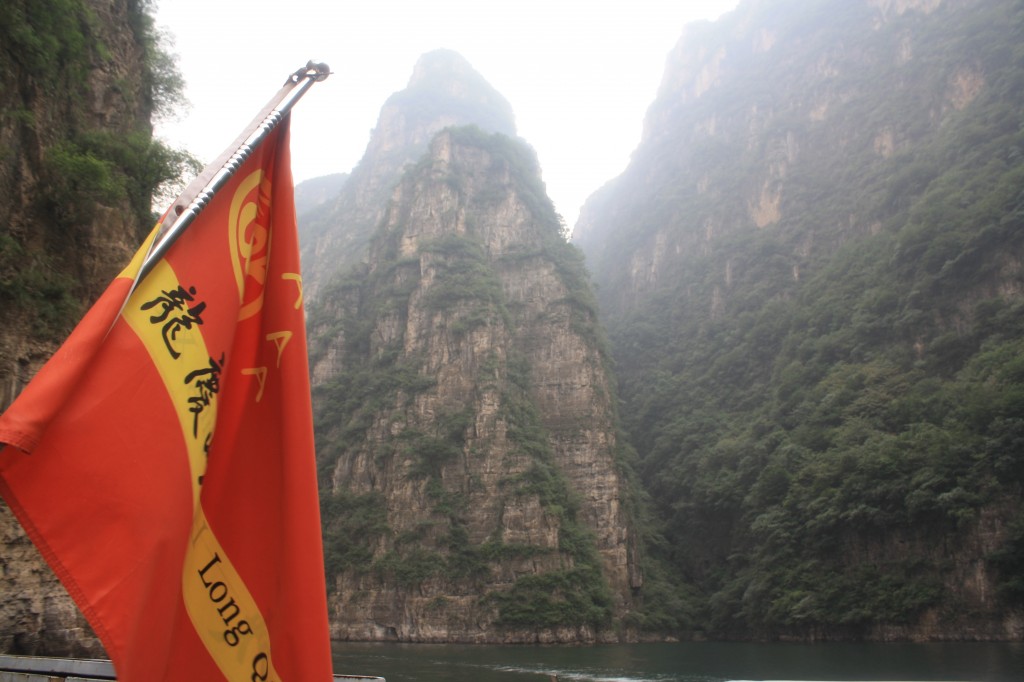 Dragon Gorge, or Long Qing Xia, can be tricky to get too, but the scenery is compellingly picturesque, even if, as with many tourist attractions in China, there are also some inexplicably confusing aspects to the whole experience.

If you’re excited by the prospect of visiting, for good or bad, check out China Travel Guide for more detailed instructions on all things logistical.