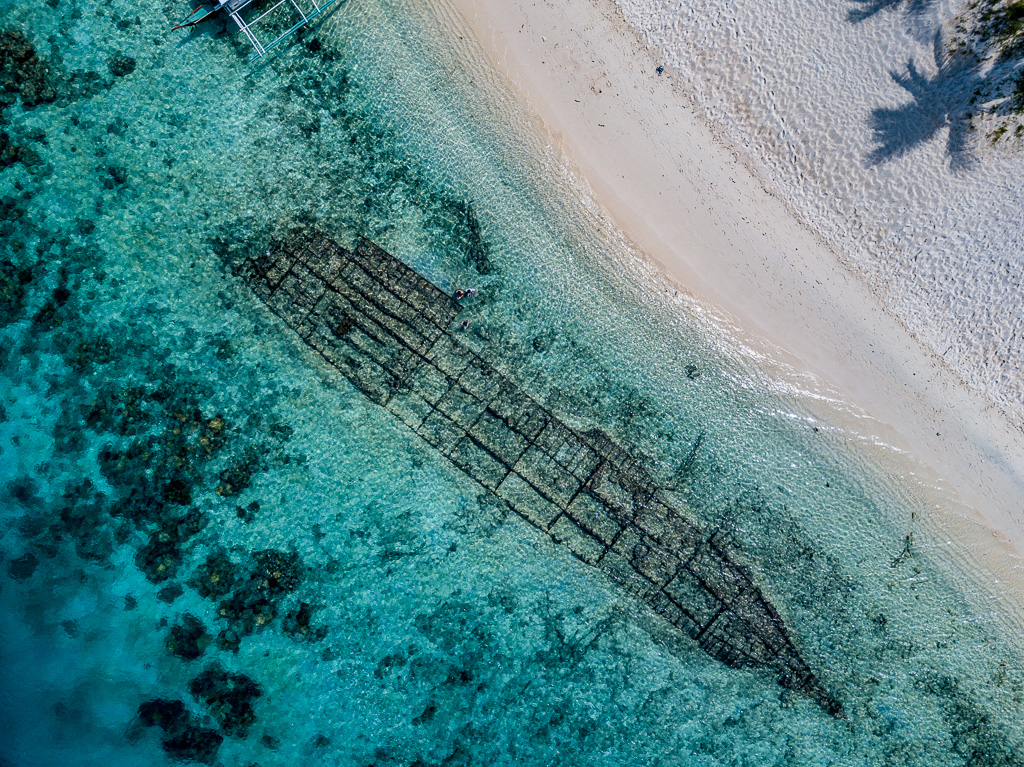 The limestone cliffs of Black Island Coron grew ever larger on the horizon as the wooden outrigger boat crashed through the waves and sped ever closer to our destination.

We were far out in the northern Calamianes Islands, a few hours boat ride away from the tourist hub of Coron Town at the far end of this island chain. Our destination was Black Island, a remote and far off island made of towering limestone rocks and fronted by a beautiful, sandy beach.

I was travelling here in search these rugged cliffs, and on this last frontier in Coron I found the black rocks that give the island its name alongside hidden caves and a beached shipwreck. 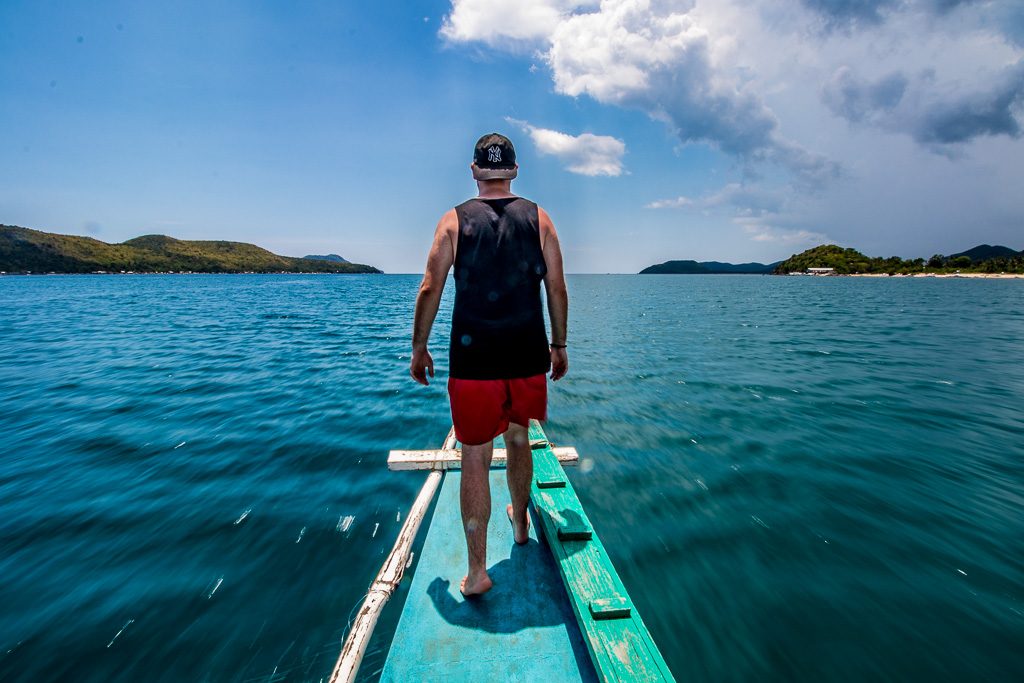 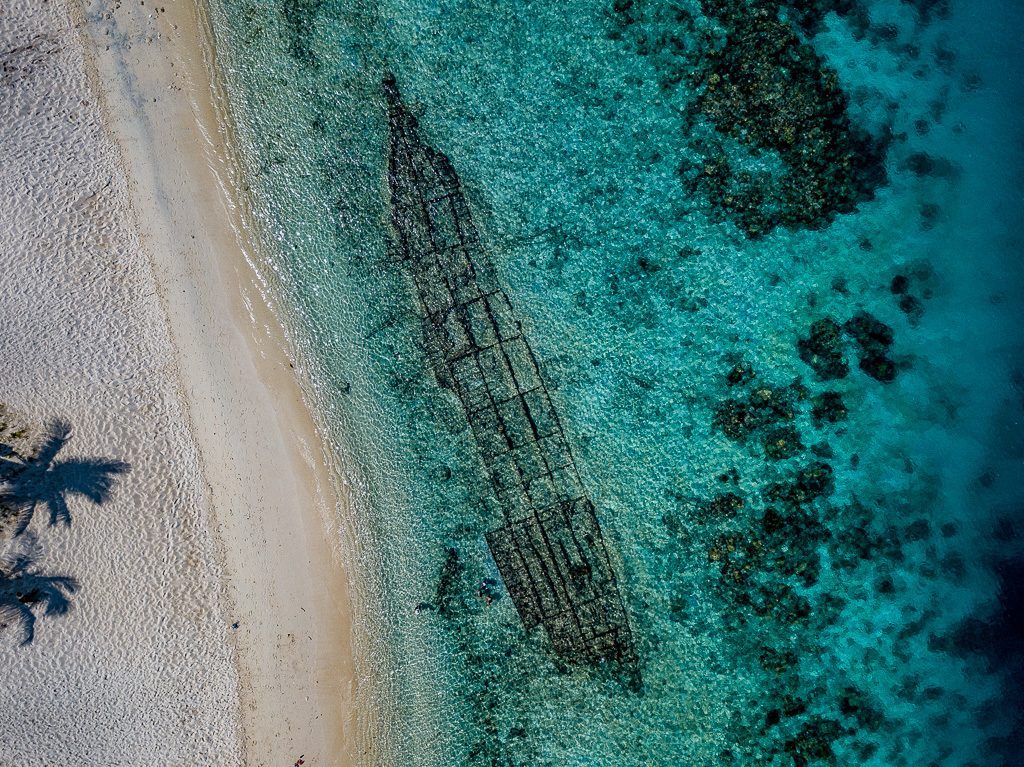 Black Island is really known as Malajon Island. That’s what the locals call it, and a few even call the island home. It’s a wild, far off place to live. A rock surrounded by beach, coral and palm trees but away from the main island of Busuanga which is over an hour’s travel away by boat. The English name, Black Island, comes from the very imposing limestone rocks that make the island look so rugged and wild from afar.

As the boat reached the beach at the foot of the cliffs, I looked up and realised just how imposing they really were. They tower above, casting dark shadows across the sandy beach. Black Island is really just beach and rock. But it looks spectacular. 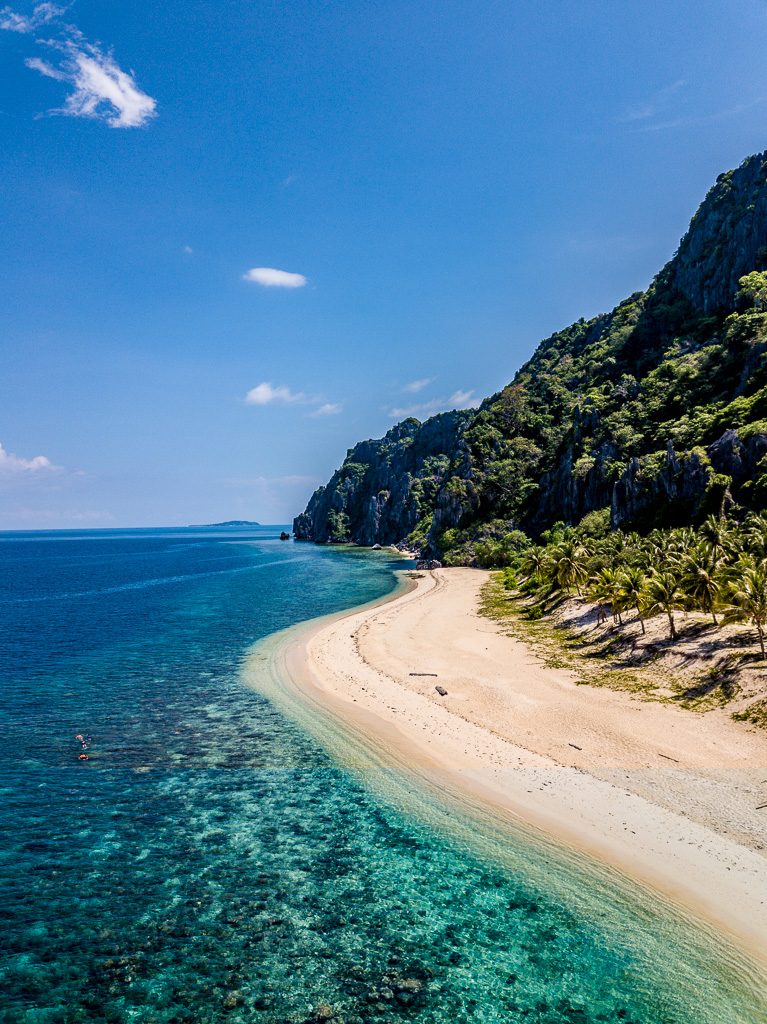 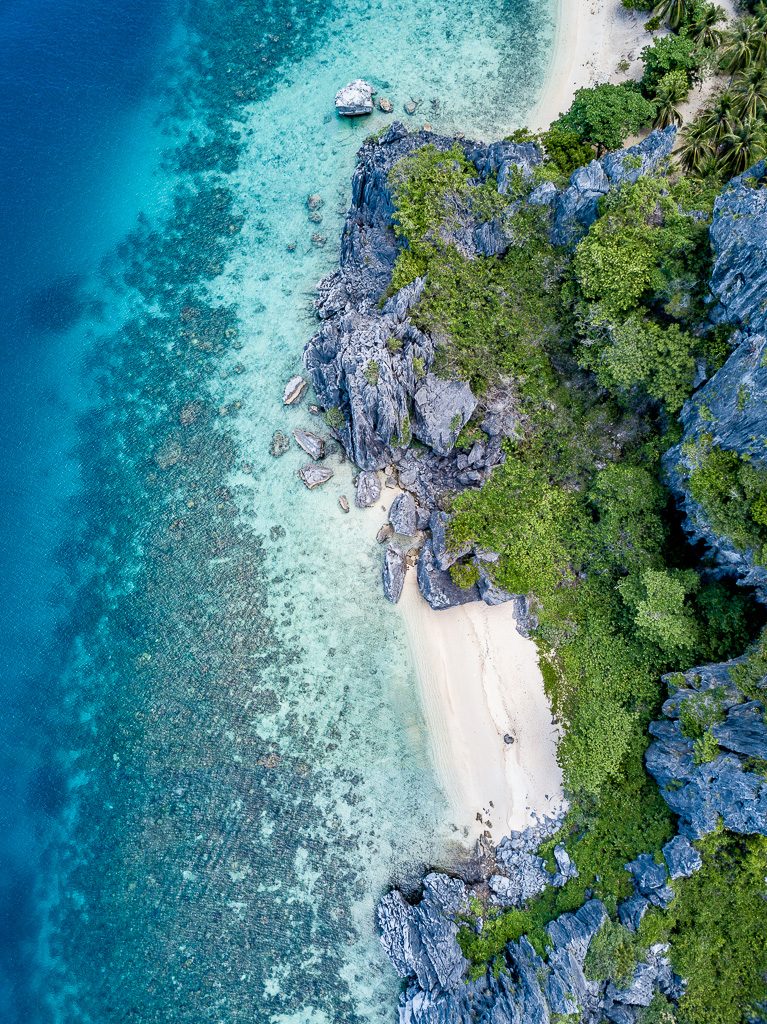 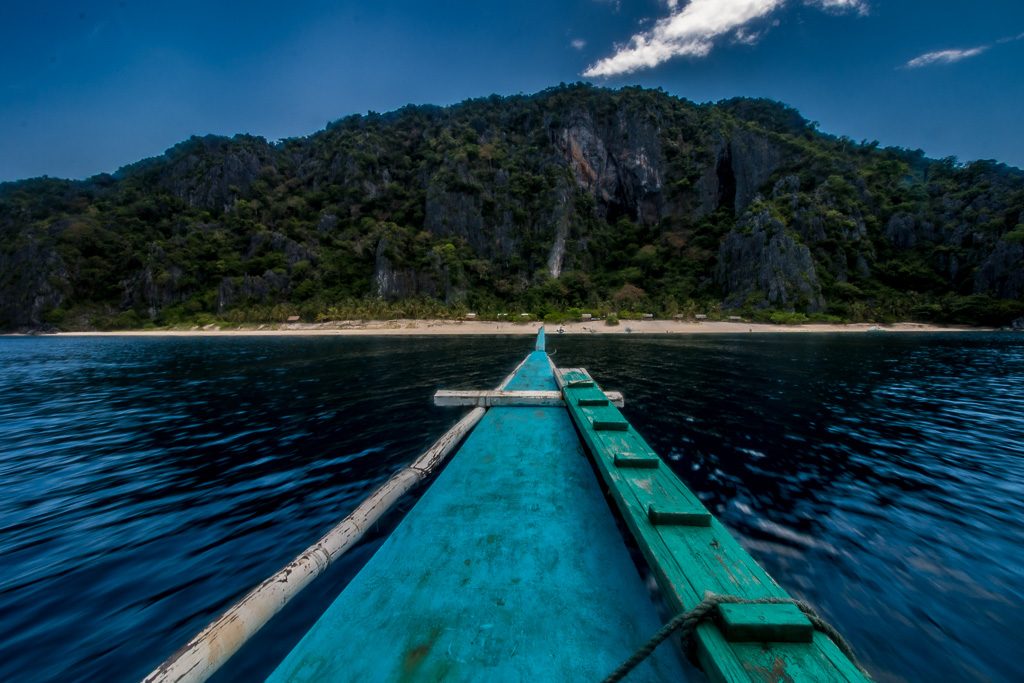 The beach is beautifully sandy on Black Island. It’s not nearly as white as other islands in Coron but once you set foot on the sand you understand at once how soft it is and how much of it there is. The sand forms a huge upwards embankment that leads to the base of the limestone cliffs, and where the sand flattens out are rows of bamboo huts and shelters offering shade from the sun.

Lines of palm trees run along the top of the sand too, windswept and looking very, very tropical. Almost, dare I say it, like something out of that castaway movie. 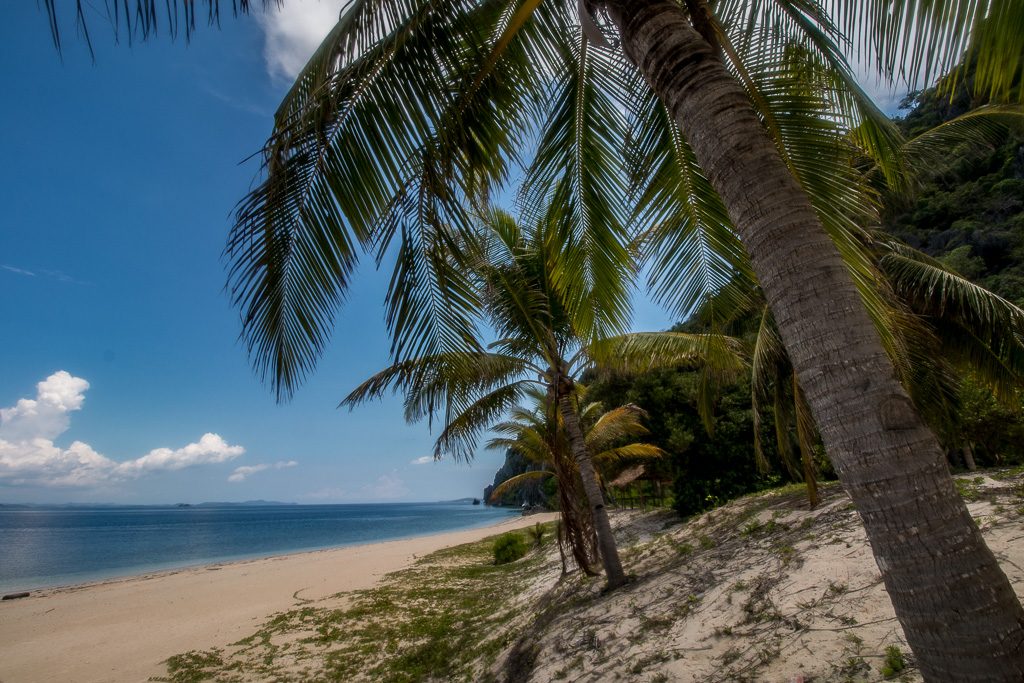 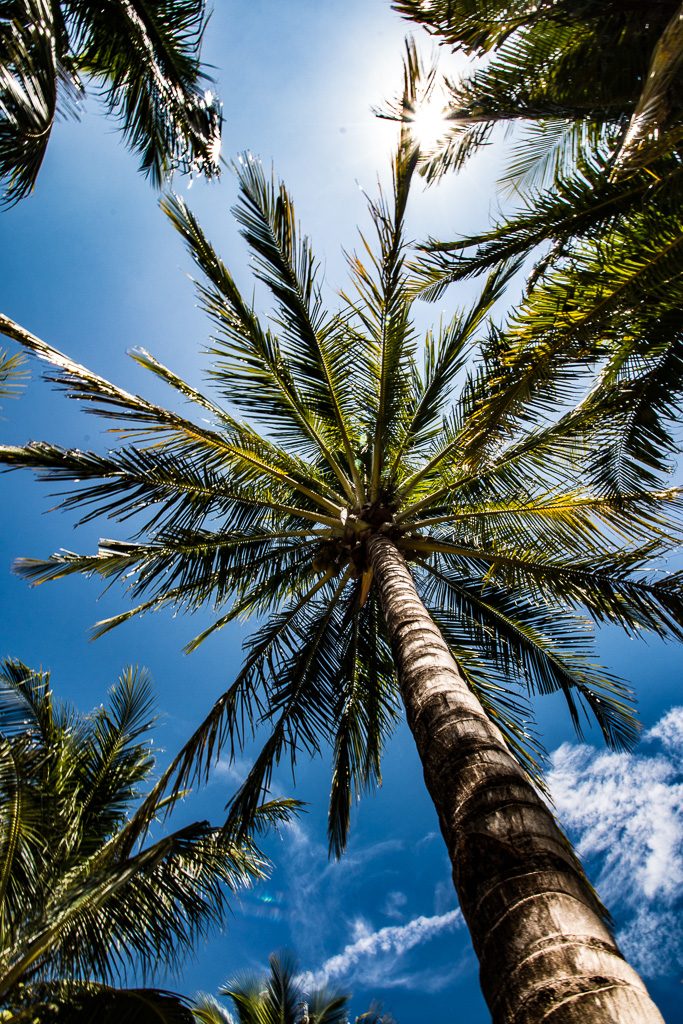 The massive limestone rocks that formed the core of the island over thousand of years are the site of a network of caves running through the black rock.

In the depths of the rock, could be many kilometres of tunnels and hidden caverns, but accessible to visitors on Black Island are three known caves at the base that can be easily reached from the beach.

One of these even has a small freshwater swimming area inside. Even more castaway-esque.

Flying my drone along the beach and above the limestone cliffs, I soon noticed that in the shallow, clear water right next to the sand was the strange dark shape of what could only be a shipwreck.

I hadn’t noticed it on my stroll down the beach, but on the drone footage it was unmistakably there, and it explained why a few people were swimming in circles around that particular spot.

This was the Black Island shipwreck, and I’d only spotted it from the air. I soon flew the drone back and pulled out my mask and snorkel to get a closer look, and underneath just a few feet of water I found the skeletal remains of a ship.

The wreck isn’t deep at all, and is literally just two to three metres away from the shoreline. There’s little left but the hulk, but the coral and marine life have attached themselves to it, creating a shallow, artificial reef that can be snorkelled straight off the beach. 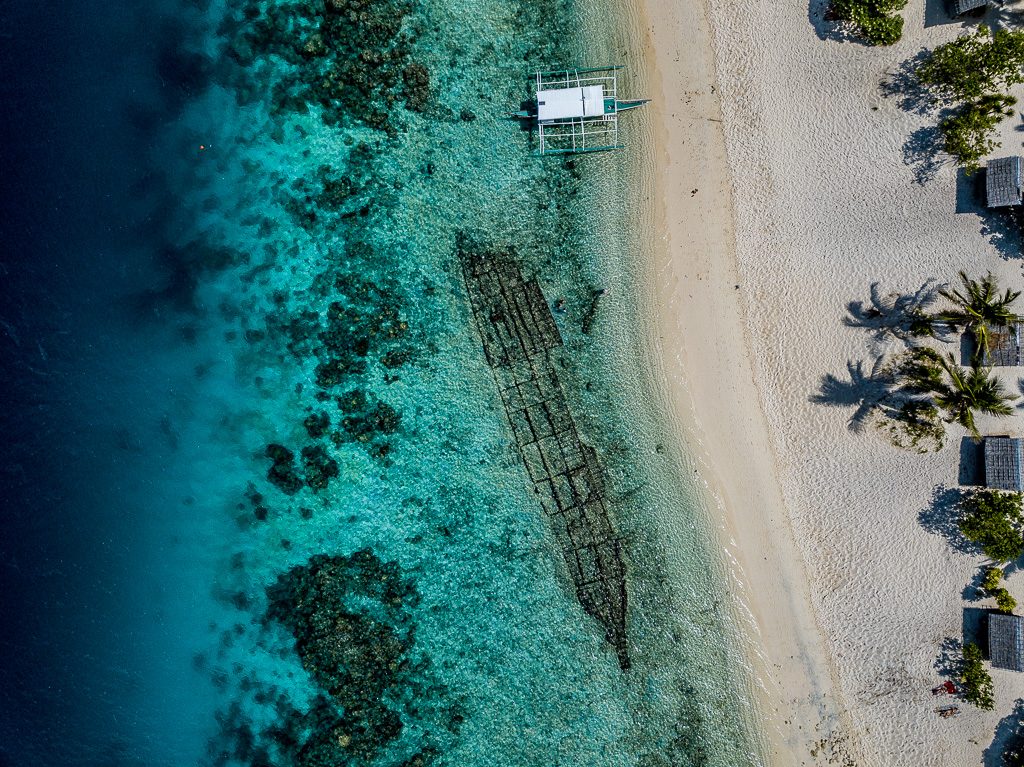 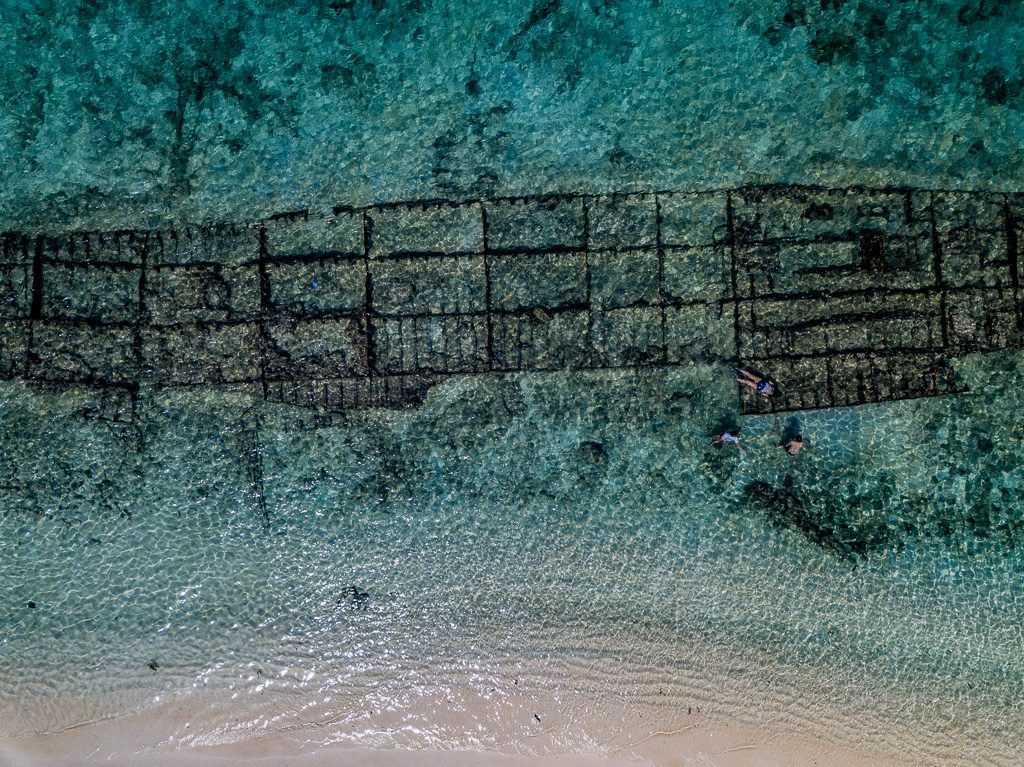 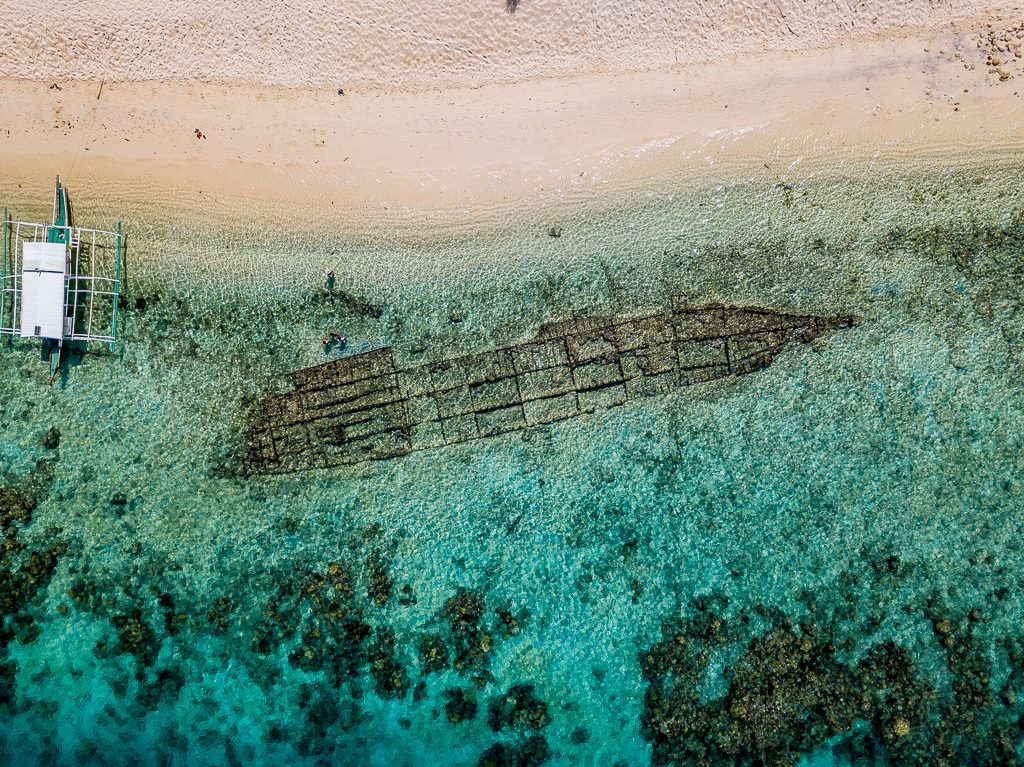 How To Travel To Black Island Coron

Here’s my quick guide on travelling to Black Island (known locally as Malajon Island) from Coron in the Philippines! I’d advise taking sunscreen, water, food and cold beers if you are travelling here as there are very few facilities (read: no bars!) on the island. The island is technically privately owned by local groups, so be prepared to pay a 200 PHP entrance fee.

Where Is Black Island?

Black Island is located in the far northern Calamianes Islands, being one of the last islands in the chain that spreads along Busuanga Island and includes Coron Island much further south. To get to Black Island, you will need a boat, but in Coron, that’s never difficult to arrange.

Location of Black Island (Malajon Island) in relation to Coron:

Travel To Black Island From Coron

If you are travelling to Coron, then the chances are high that you will inevitably end up staying in Coron Town, the largest town and the tourist area on Busuanga Island – yes, Coron Island is actually much smaller and separated from the larger island that everyone thinks is Coron, but isn’t actually Coron. From Coron Town though, Black Island is rather far away.

It’s possible to arrange a local boat from Coron Town to take you all the way north to Black Island. The journey would be spectacular, as you would pass through all of the Calamianes Islands on the way, but it would take a minimum of three hours each way. That’s a long time to spend in a rickety fishing boat.

The quicker route is to travel by land up to Salvacion, north of Coron Town by about one hour of driving, and from there hire a boat for the one hour trip across to Black Island. Salvacion is a small little town, but it’s also a chance to load up on any supplies for the trip too if you missed out in Coron Town. There are no busses as such up this way, so you would need to arrange your own transport for all legs of this journey.

The easiest option is to simply jump on an organised tour. These usually operate everyday from Coron Town, and there are hundreds of tour providers in town who will be happy to quote you prices and arrange the trip. I would recommend having a look at Calamianes Expeditions, especially if you wanted to arrange anything in advance too.

I travelled to Black Island via Pass Island on a longer day trip from Concepcion and paid for the entire day 800 PHP on a boat split between 12 people, including transport to and from Coron Town. In Coron, there are literally hundreds of different island day trips you can combine to create great itineraries!

Location of Salvacion in Coron:

When Should I Visit Black Island Coron?

Coron is best visited during the dry season, generally between December and May. Outside of this, there can be typhoons and lots of rain. Dry season of course, is also the busiest and most expensive time of year to go, but you are pretty much guaranteed excellent conditions.

Black Island is far north and that tends to mean that people will end up travelling here later in the day if visiting as part of a multi island trip, so it’s best to try and arrange an early morning departure to be on the beach far before other groups begin to arrive after lunch.

The Best Things To Do On Black Island