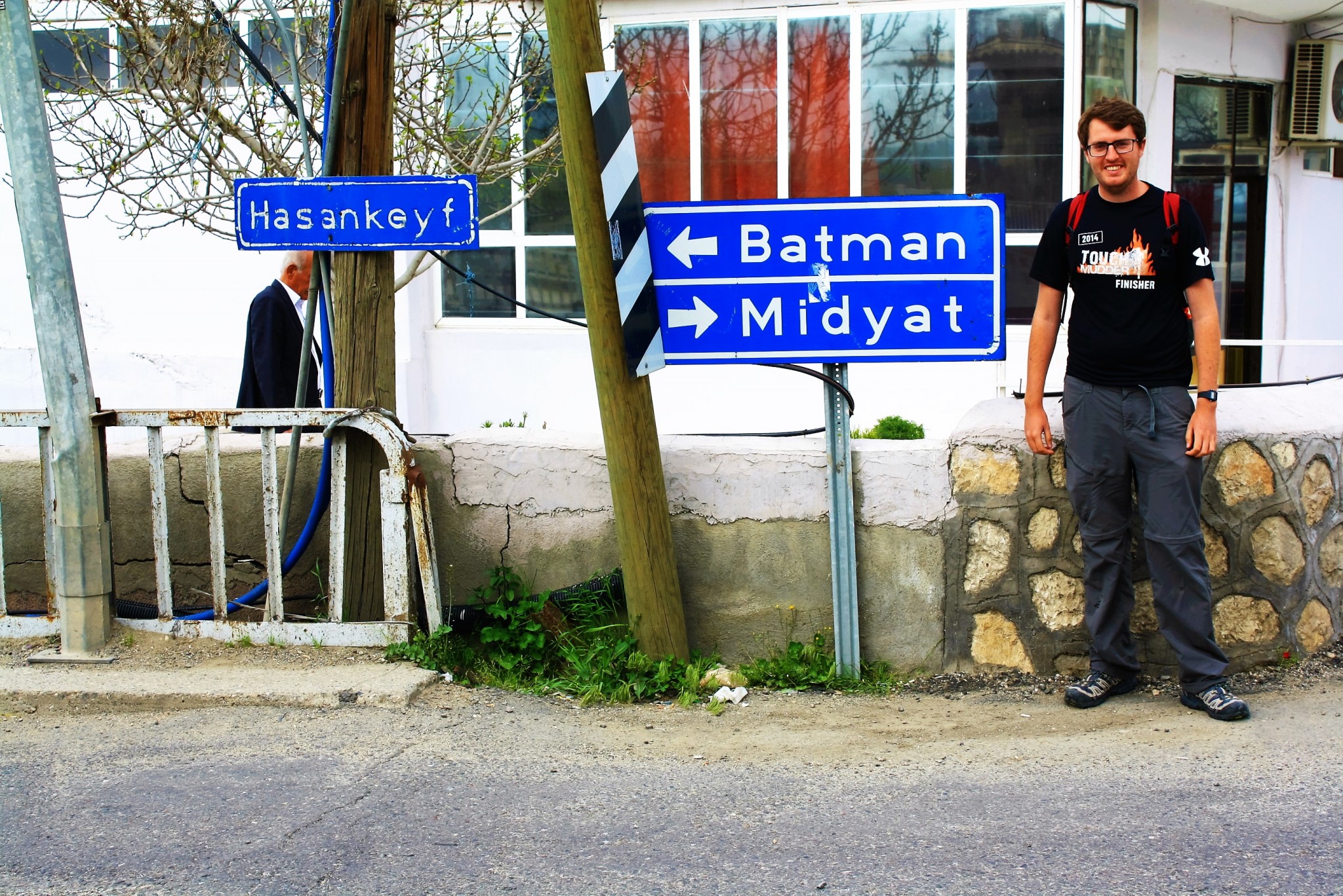 I went in search of the town of Batman during my travels in Turkey, because you know, the name.

“Don’t go to Batman!” My guest house owner in Cappadocia was telling me. “There’s a war going on!”

This was the same advice I heard frequently in Turkey. Before I got to Batman of course.

I was told by the locals not to travel anywhere in the south, certainly not the Kurdish regions. Everyone was at war there. The media told the same tale. There were scenes of violence on the Turkish news daily during my travels to the country. And indeed, on the border with Iraq and Syria, there was trouble. There was fighting and people were dieing.

In Turkey, things aren’t so black and white as war and peace or right and wrong. 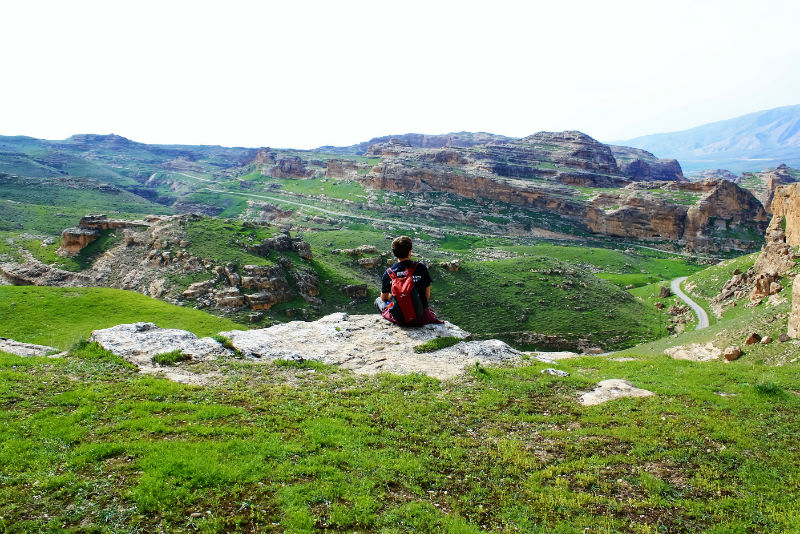 Hanging out in Southern Turkey.

No one I spoke to in Istanbul, or along the Turkish coastline, had really travelled to the predominantly Kurdish regions, such as South East Anatolia, or Eastern Anatolia. I did my research, and the fighting and insurgencies were isolated mainly along the border regions. One name on the map stood out, for obvious reasons. Batman.

I decided that I would have to visit this region myself. The United Kingdom’s Foreign Office didn’t advise against it and nowhere’s ever as bad as they say right? I had a mission. To visit the town of Batman. I didn’t know what exactly there was to do in the town itself, hopefully there would be some amusing signs. Just outside of Batman though, there’s a rarely visited 12,000 year old town- Hasankeyf- a town which may soon be flooded by the Turkish government as part of a huge dam project.

This region was getting more and more interesting… 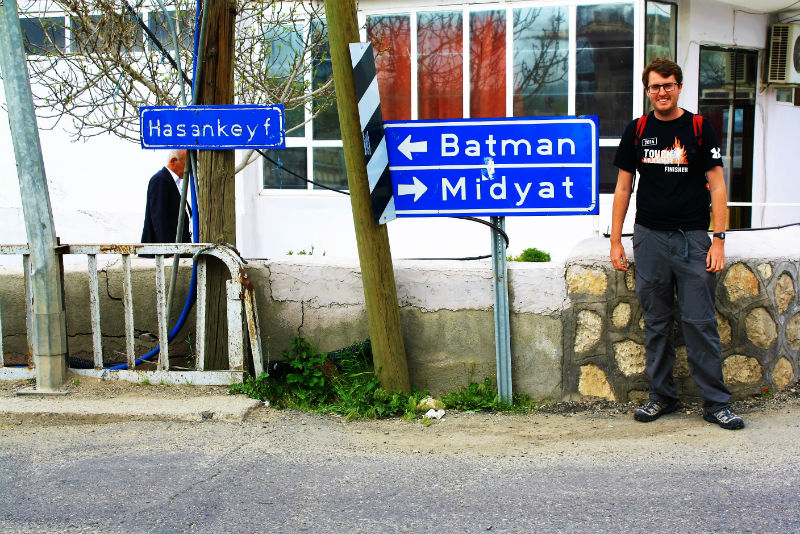 Yes, there is a place called BATMAN!

I was off to Batman. I left Cappadocia, where I was told firmly not to travel any further south. Certainly not to anywhere like Diyabakir, Batman or Van- all places, incidentally, that I ended up visiting.

It was better to head north I was told, why not go to Ankara?

But in my mind, the big cities in Turkey at the time were not safe. A few weeks previously, I had been in Istanbul, hanging around Taksim square where a few days after I left a suicide bomber killed people out shopping on the busy street. Ankara was the target of attacks throughout the year. I was no safer in the big Turkish cities than anywhere else in the country.

I stopped off en route to see the giant heads of Mount Nemrut. This was where the Turkish people and the Kurdish people began to merge, and their cultures and languages collide. I won’t get into the politics here, but in the Kurdish regions of Turkey, the militant PKK group have been waging a war against the Turkish government for years, with intermittent cease fires. 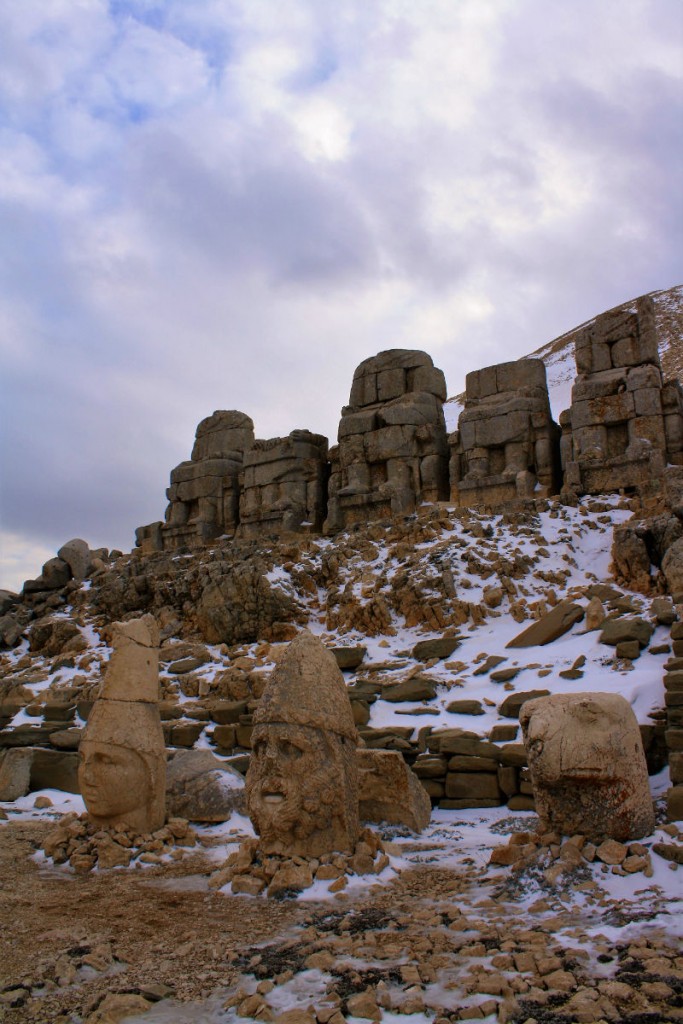 At Nemrut, I was told by the Kurdish man running the guest house not to head too close to the border. But Batman would be fine. Kurdish people were only friendly and hospitable, especially towards foreigners (unless you are Turkish I suspect). I should be worried about the Turkish police and military. They would be suspicious of the intents of a foreigner in those parts. I could be detained, and subject to interrogation.

Different stories, always, for the same places. Now I was worried, not about PKK fighters, but about the Turkish police!

I wanted to catch a direct bus to Batman from Mount Nemrut, to avoid the large city of Diyarbakir, a place the Foreign Office does in fact label as a no go zone. It’s bright red on their map. Across Turkey, this was always the one place that people were vehemently against travelling to or even through. And the persistence and recurring nature of this had stuck anxiously in my mind.

Unfortunately, there was no direct bus. My guest house owner told me the best way was to travel south to a town called Siverek- the ride would be beautiful too I was informed- where I could change buses and get to Diyarbakir. From Diyarbakir I could get anywhere in Turkey. 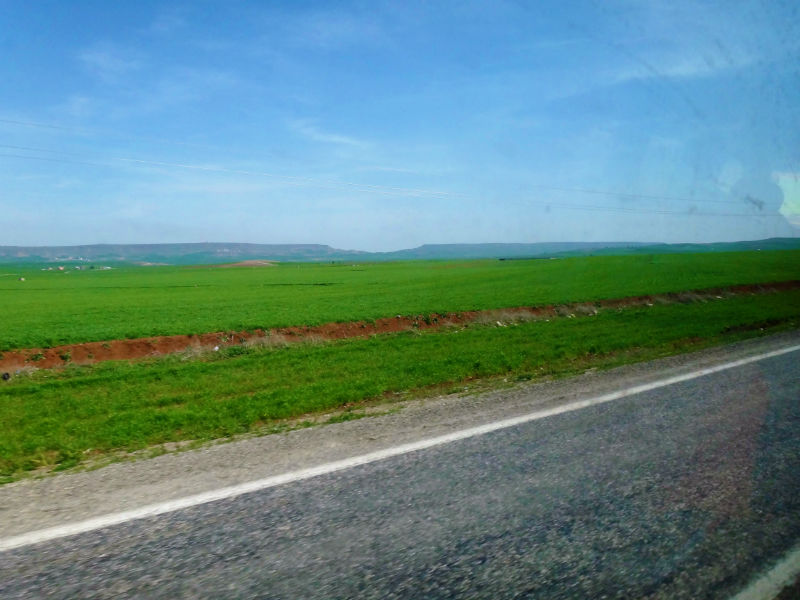 On the road again…

This would be the only way to travel to Batman. I reasoned that I would only be passing through, but Diyarbakir is the largest Kurdish city in Turkey, and battles were constantly fought in the old city, not to mention riots and bombings. I wouldn’t be a target in this war, but there was always a chance of getting caught up in things.

I could have been caught by an explosion in Istanbul though. There were no reports of any really recent trouble in Diyarbakir and I would stay away from the hotspot areas and simply change bus. Local people wouldn’t think twice about this, yet I was.

That was it, I was on my way to the town of Siverek. This was where it became clear that the political landscape was really changing. The local police buildings and army barracks were all barricaded and fortified. The police were patrolling in riot vans, and armoured vehicles.

I was told that this was normal.

I changed bus with no trouble in Siverek, and I was on my way to Diyarbakir. The one place I was always told I really shouldn’t go. Well, there was no turning back now.

In Diyarbakir, it again felt more like an occupation. The military were on high alert after the recent bombings in Istanbul and Ankara, and especially in light of the fact that the ceasefire between the Kurds and the Turks had been broken in the last few months.

There were heavily armed military units and police patrolling with weapons at the ready, armoured vehicles parked on every corner and artillery- yes, artillery!- at the entrance to the local airport.

I changed buses again, and was soon out of Diyarbakir and driving towards Batman. 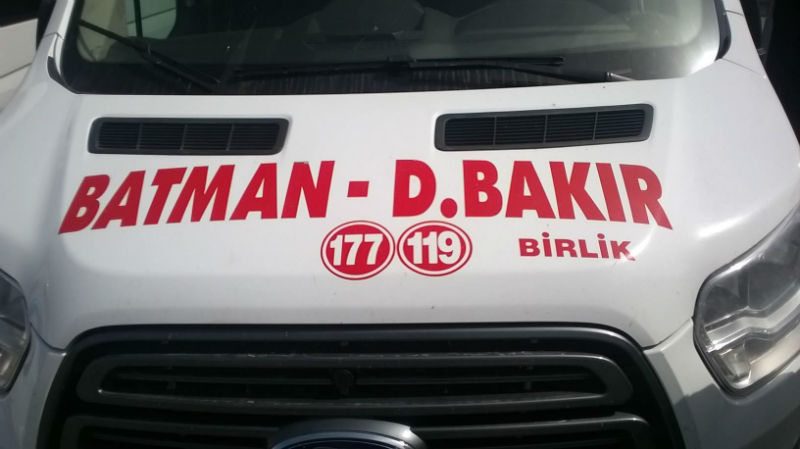 I wish I’d had the balls to stay longer. The old town is supposedly beautiful- a UNESCO World Heritage Sight- but a few days later, there were a series of bombings in the city. These attacks have increased in intensity since unfortunately.

In Batman, things were decidedly less tense. There were no riot vans, few police and no armoured vehicles patrolling the streets. It was a strange contrast. In Turkey though, that’s the way things seem go. Certain areas, for various historical reasons, have turned into current political hotspots. 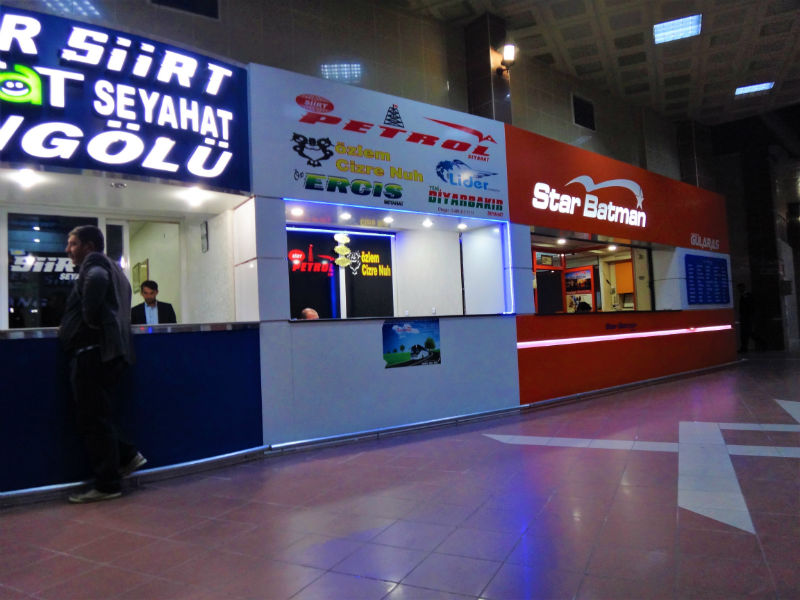 Star Batman, the best bus company in all of the Batman land!

And in Batman, I was having far too much fun simply being there. There’s a Batman University, a Batman Clothes Shop, Batman Hotel, Batman Bus Station. The locals didn’t quite get what amused me so much all the time. They were incredibly friendly though, but terribly confused as to why I was there. I said to see the old town of Hasankeyf, and because why not?

A local Kurdish man came over and asked what had brought me to Batman, when no one visited these days. The Turkish media was always wrong when it came to this region he said. There was a war in the south, yes, but not here in Batman, and the Kurds were a friendly people, not a war like people. 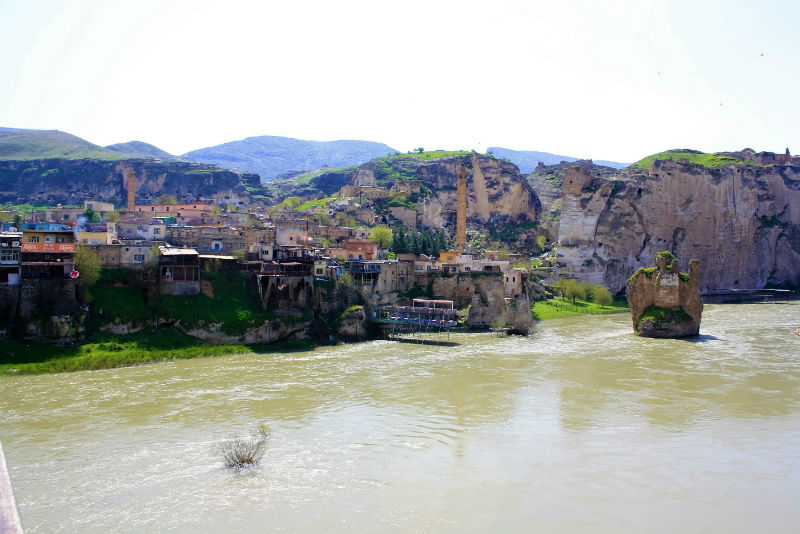 Batman is a large provincial town. It would be a pleasant place to live, with all the modern trappings of a Turkish city to be had. And it was perfectly safe. It was not used to seeing visitors though, and traditional tourist sights were limited. It did however give me a ‘real’ insight into what a ‘real’ city in the south of Turkey was like, and only a few miles away is the 12,000 year old town of Hasankeyf.

I would advise getting as much information, from as many sources as possible, before making informed decisions to travel to, or to avoid, places like Diyarbakir.

Hasankeyf: The Twelve Thousand Year Old Town Which Will Soon Be Underwater