Remembrance, Grief And Joy: Marching With The Armenians 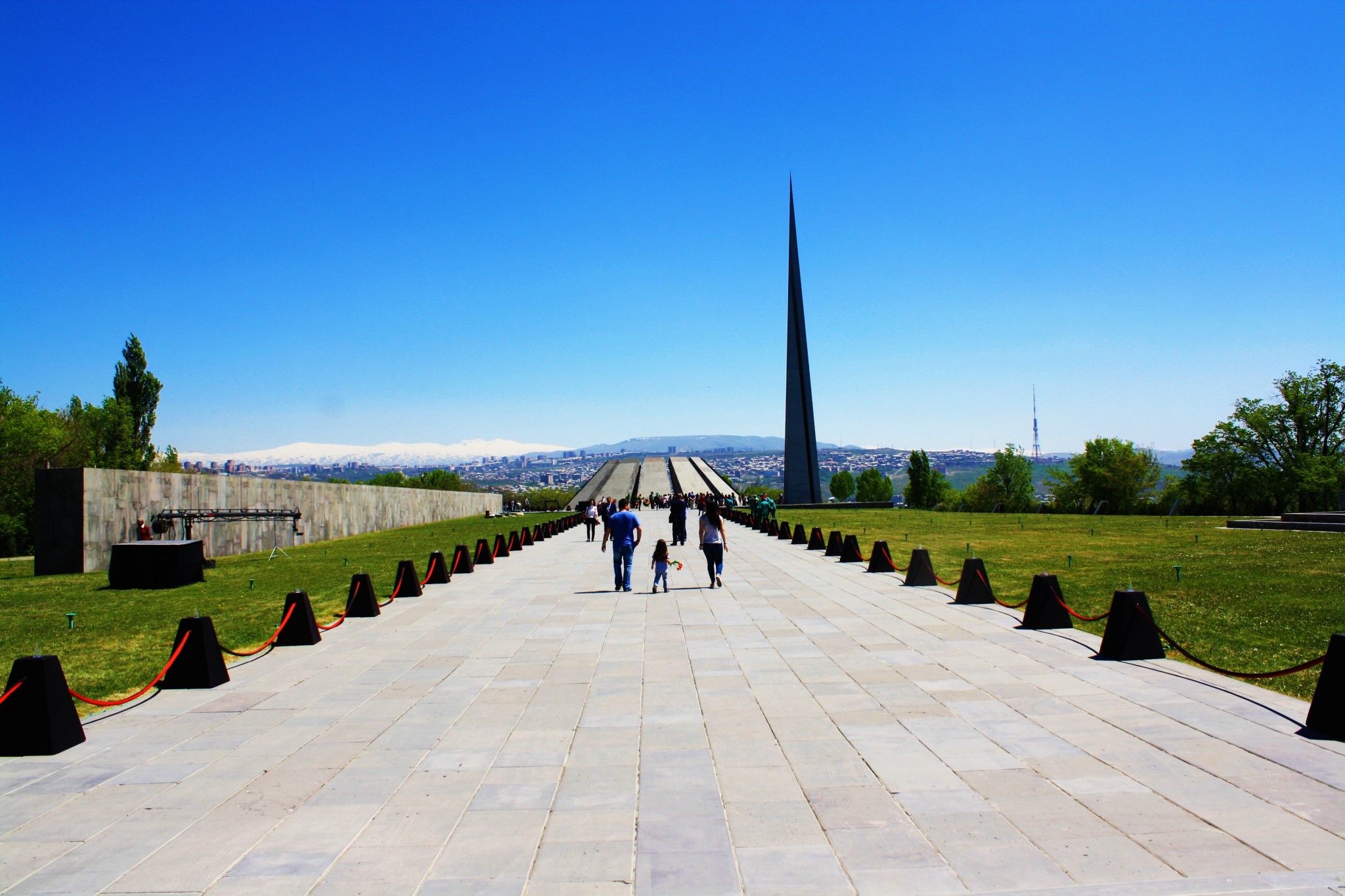 Moving, and emotional. This is my personal experience of marching with the Armenians on Armenian Genocide Remembrance Day.

Each year, on 24 April, the people of Yerevan make their way stoically to the top of the Tsitsernakaberd hill outside of the city, to each lay a flower for the victims of the Armenian Genocide, while around the world, the Armenian diaspora too remember the suffering of a whole people, so history is not forgotten, nor repeated. 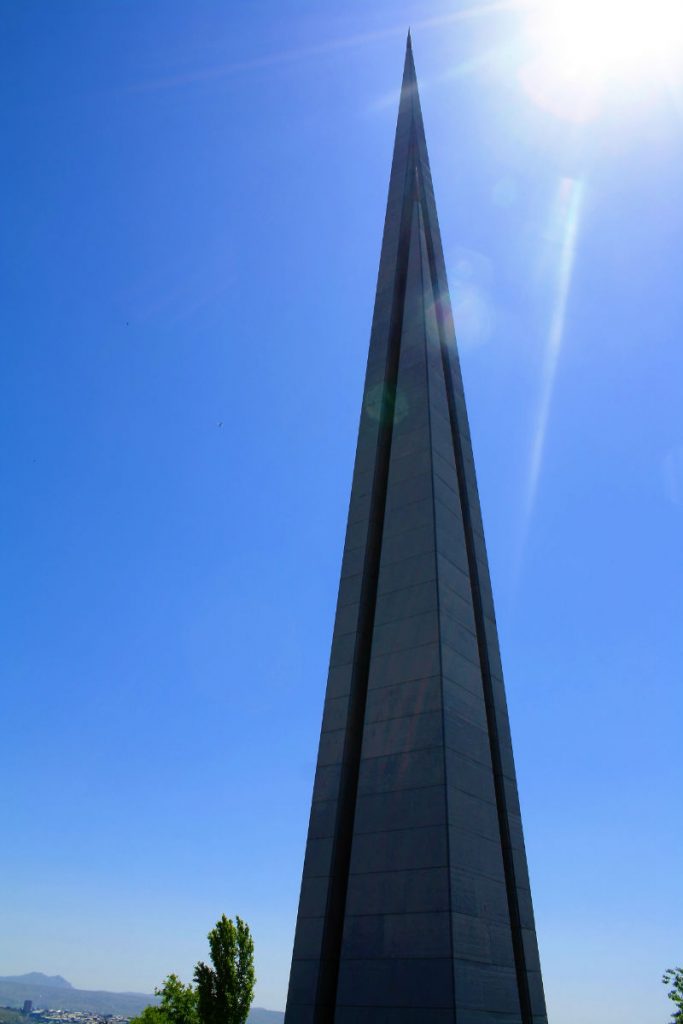 I found myself unwittingly caught up in it all. I was travelling in Armenia, and Yerevan, the small nation’s capital seemed particularly busy. My hostel was across the road from the Armenian Genocide Memorial Complex, where a towering spike reaches towards the sky, next to a circular bastion which shields an eternal flame. The complex stands atop a high point just outside the city centre, and can be seen from across Yerevan. It’s a place of remembrance, and with the museum, a place of learning too. 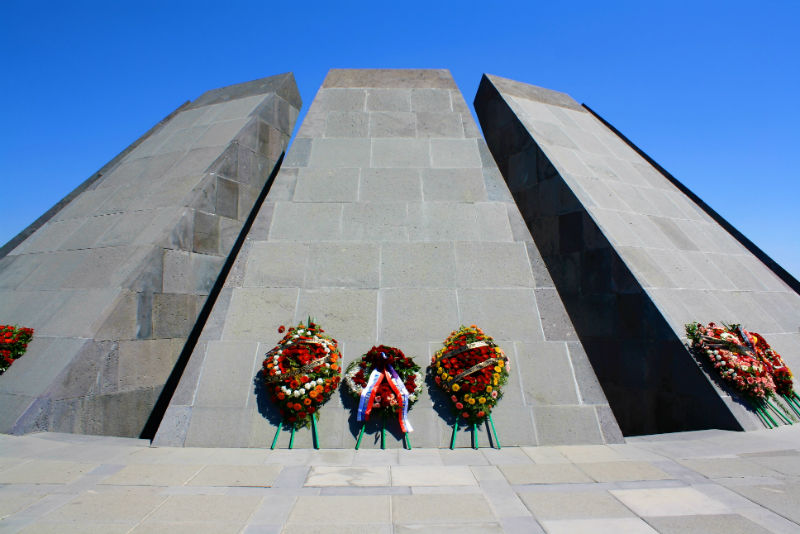 I had much to learn about the tragic events that are commemorated here.

April 24 marks the day that in 1915 the Ottoman Empire imprisoned Armenian intellectuals- writers, scholars, leaders- in  Constantinople (present day Istanbul). This was the beginning of the end for the Armenian people across the Empire. What followed, as World War I played itself out across the world, was a brutal campaign against an entire people.

Armenians across the empire would become victims of forced deportations, massacres, and indiscriminate killings. Estimates vary, but Armenia itself claims that 1 and half million ethnic Armenians perished as a result of Ottoman policies against them. Even when World War I drew to a close in 1918, and the Ottoman Empire collapsed, atrocities began afresh in the 1920’s as Turkish nationalism took hold, and the modern nation of Turkey began to take shape.

Without getting into the politics of it all, I will say that in Armenia, it is most certainly seen as Genocide. The consequences of which are still felt today. Armenians were ousted from their territories in the east of Turkey, cities such as Van and Erzurum to name a few. Even Mount Ararat and the ruined city of Ani, Armenian symbols of their history and nation, now lie within the borders of Turkey. Mount Ararat, tantalisingly close, can be seen from Yerevan, but the border with Turkey is still, and looks likely to remain for a long time, closed. 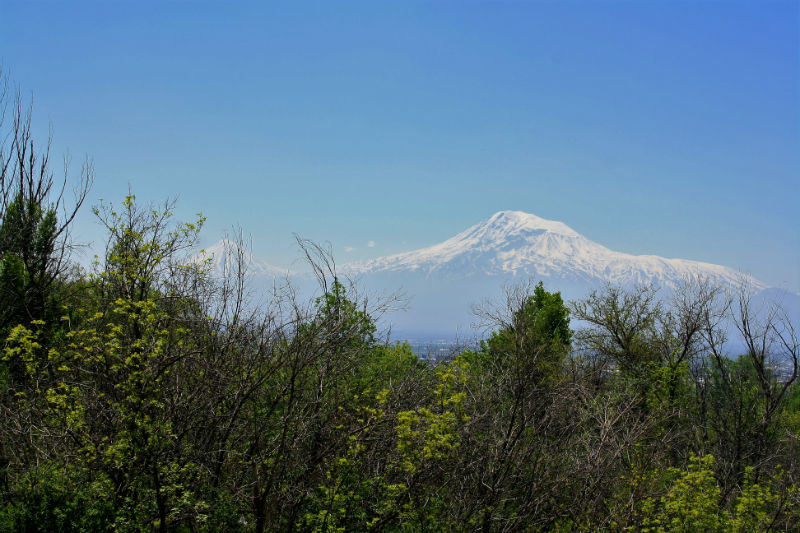 I knew little about the events of 1915 that shaped this nation. I am probably not the only person who is ignorant of them either. It is a chapter of history that is often overlooked in the West. When I travelled through Turkey, I did not realise it until later, but there was almost no mention of these events in any city I went to.

On the night of April 23, thousands of people walked through the centre of Yerevan towards the hill top. Each person had a little candle and many more were waving Armenian flags. My friend Tigran, a local from the city, explained that this happens every year, the night before the remembrance day, and the following day, people would march again, this time to lay flowers. 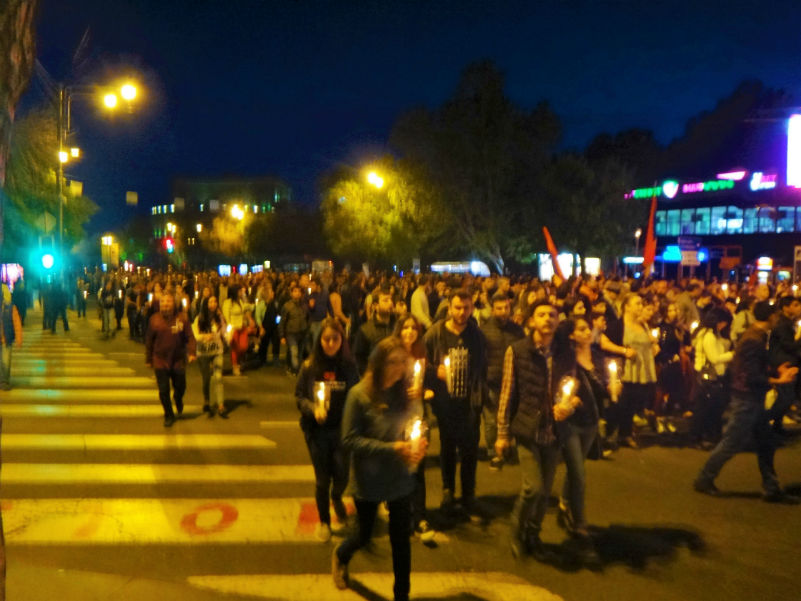 On April 24, I decided to walk to the monument. I never expected there to be so many people, but on this most important of days in Armenian history, the huge diaspora that exists across the world make their way here as well to pay their respects. 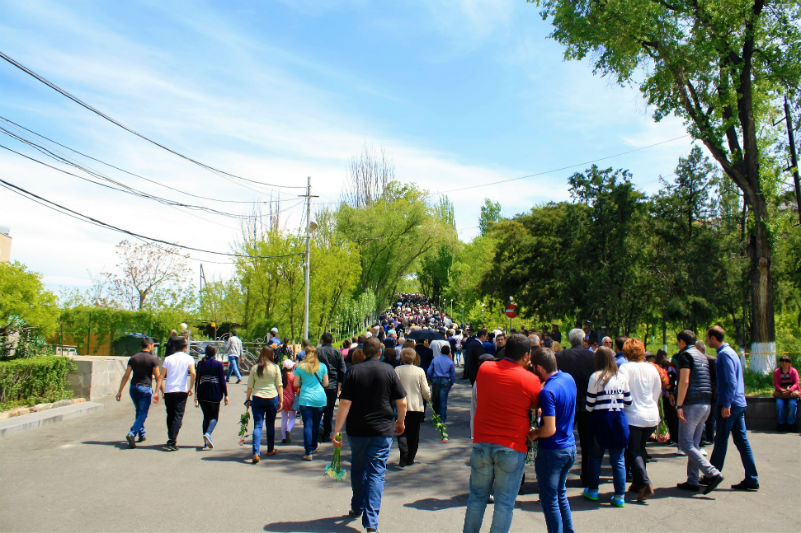 I began walking with the crowds to the top of the hill. Some people had huge bouquets of flowers- a local football team was even carrying an enormous flower arrangement between six of them- while many more had single flowers. It was a colourful procession, and one which began at dawn, and wouldn’t end until the sunset.

The bright colours helped to take the edge off the sombre circumstances of the walk. It wasn’t all gloom. Some were visibly moved, myself included, some were walking nonchalantly, kids were playing in the crowds, and other were in cheerful, joyful moods, perhaps happy to be able to remember in a such a way. Everyone should be entitled, celebrate, grieve or remember in their own way. 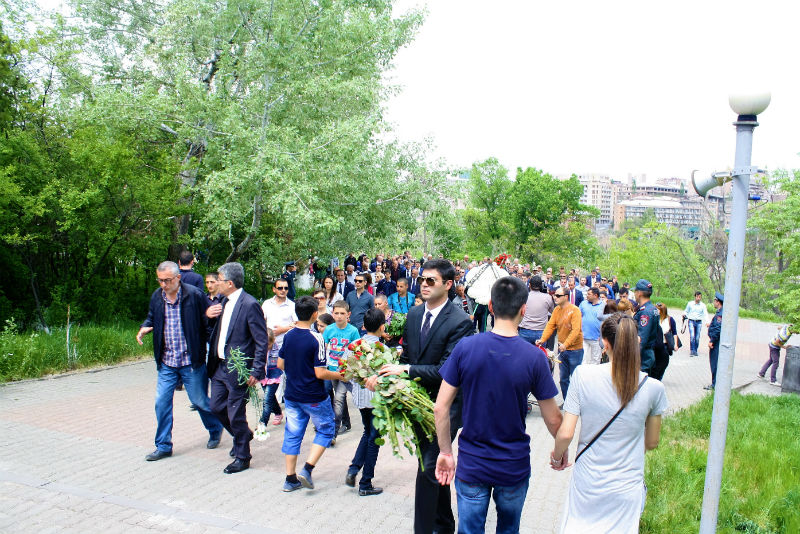 The crowds held a full spectrum of emotions alongside the colours.

One man saw that I had no flowers to lay and as I walked next to him, he separated several of the roses from his bunch and handed them to me.

I was now a part of this. 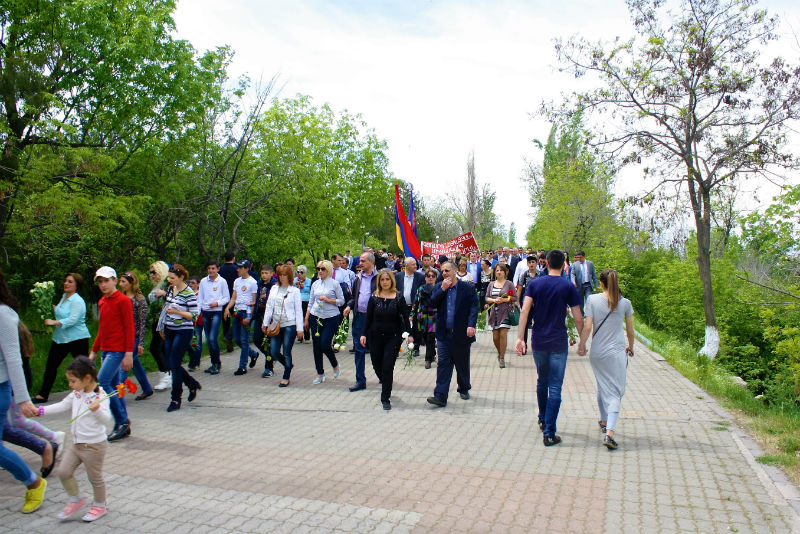 With the eternal flame in sight, an old man strolled over to me, asking where I was from in English. This was Stephen, of Armenian origin, and one of the diaspora making the pilgrimage today. I didn’t look very Armenian, he said, and he was intrigued as to why I was making this walk, on this day. I didn’t quite know. It just seemed like the right thing to do, to remember with these people here, and now I could  even lay a flower at the flame. Stephen had lived his whole life everywhere but Armenia, mostly in the United Kingdom and Australia. But he still returned. He still remembered for the sake of his ancestors. This time he had brought his grandson, so he too could learn and remember. He was glad I’d chosen to join them. 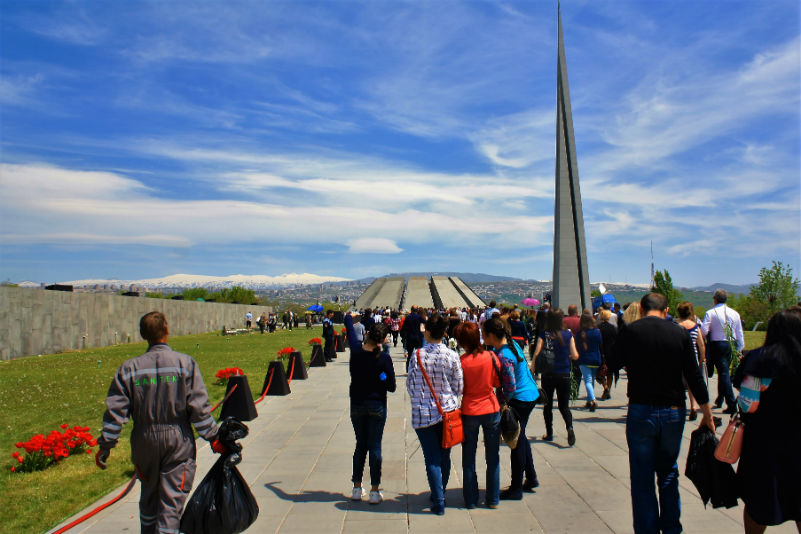 At the eternal flame, flowers had been laid all morning and were almost a metre high by midday. The procession was constant, and the flower pile was continually growing. 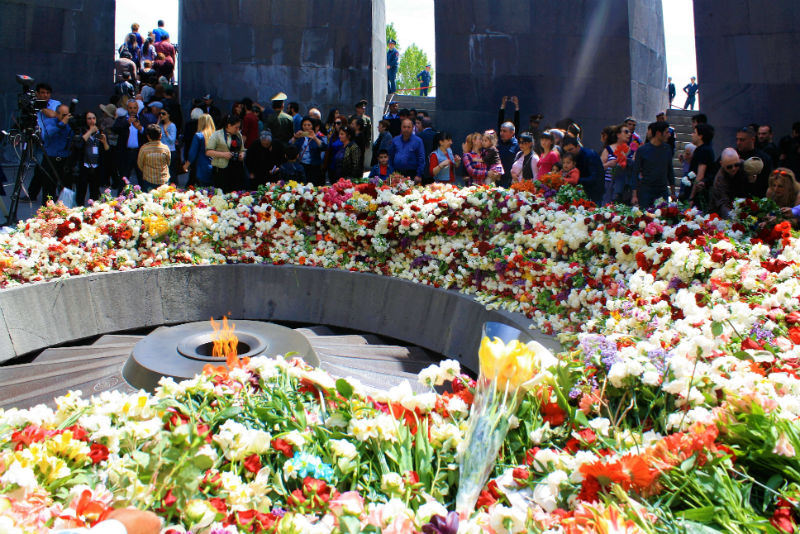 I laid down the flowers I’d been given, Stephen and his Grandson laid their flowers, and thousands more did the same. I walked down from the hill, towards Yerevan, moved by what I had witnessed and been part of, and intent on learning more about what had happened, and why it remains, over a hundred years on, as a piece of history that is so contentious, and so politically charged. 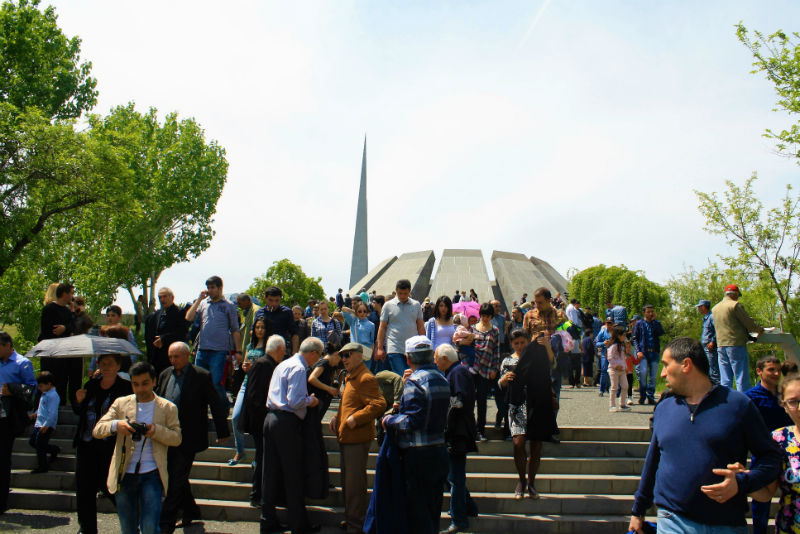 It took me a while to write about this experience. Several months. I wasn’t sure what to say, or if I should say anything. I didn’t particularly want to anger anyone on either side of the Genocide argument. Ultimately, one quote from the museum stuck in my mind, and helped me to put this all into writing, to remind me that events such as those that were perpetrated against the Armenian people, need to be remembered, even more so in the polarised world that we live in today. 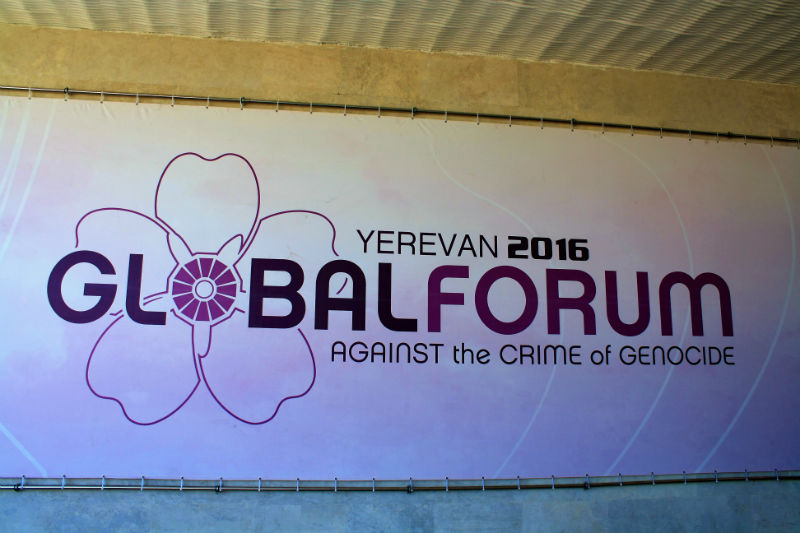 “Who, after all, speaks today of the annihilation of the Armenians?”

And who, after all, spoke those words?

Well, it was a certain Adolf Hitler.