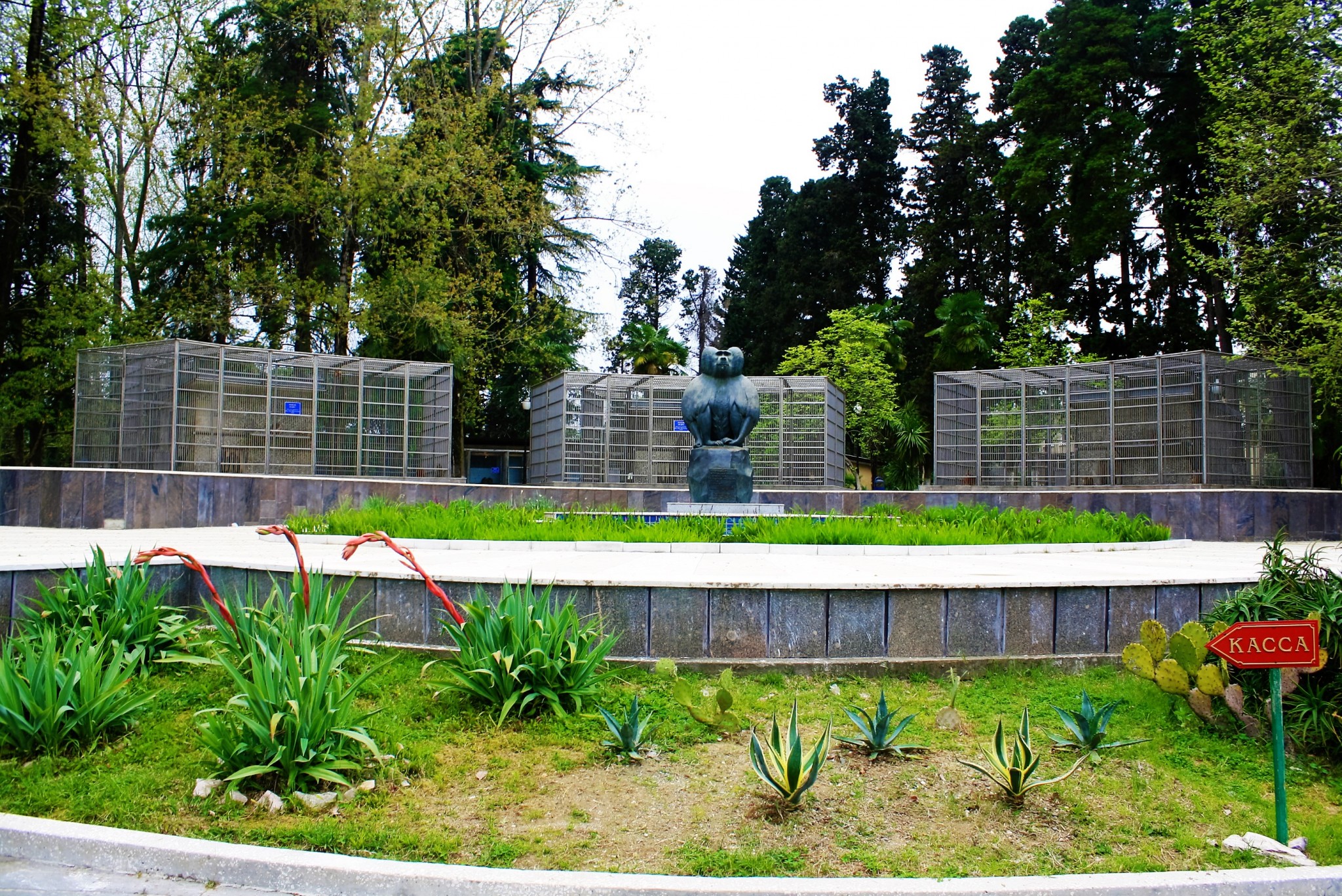 The sound of despair rose to a shrieking and terrifying crescendo as I climbed the steps towards Abkahazia’s ‘Institute of Experimental Pathology and Therapy’. This was supposed to be a monkey sanctuary, but as I got closer, all I could hear was primal fear. 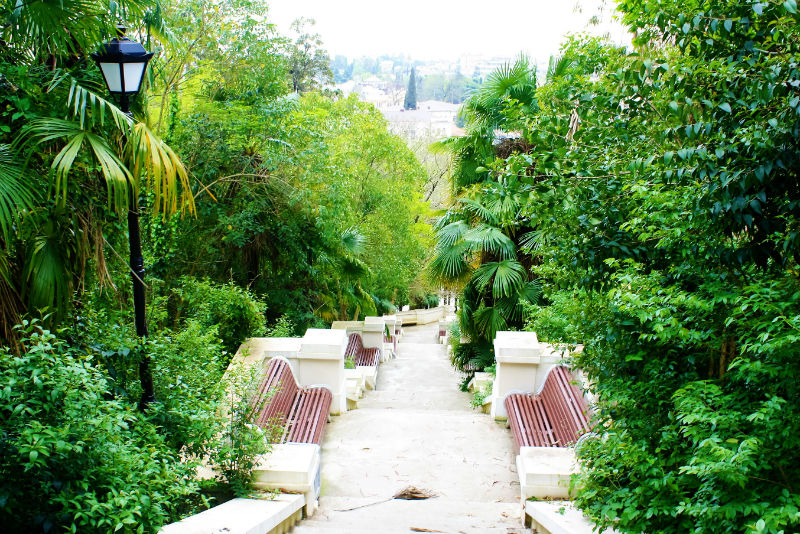 What was this place? I still don’t know.

It wasn’t a good place.

That much I do know. 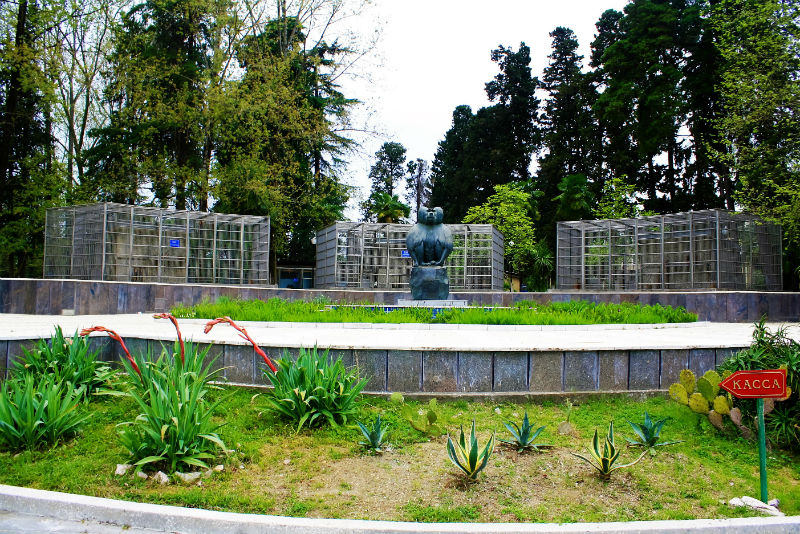 I was in Sukhumi, the capital of the Breakaway Republic of Abkhazia, a barely recognised, self declared nation state clinging to life on the edge of the Black Sea, in conflict with Georgia and in the shadow of the Russian beast.

I’d heard that above the city, in the sub tropical forested hills that surround Sukhumi, that there was a monkey sanctuary. I’d also heard rumours on the road that this was home to space monkeys, primates who had actually travelled into the stratosphere as part of Soviet space programmes, and were here, in Abkhazia of all places, being rehabilitated, or perhaps even trained. I didn’t much believe these wild rumours that I’d heard in some late night drinking binge, but I was determined to see either way if there was any substance at all to these tales.

I wasn’t ready for what I found. 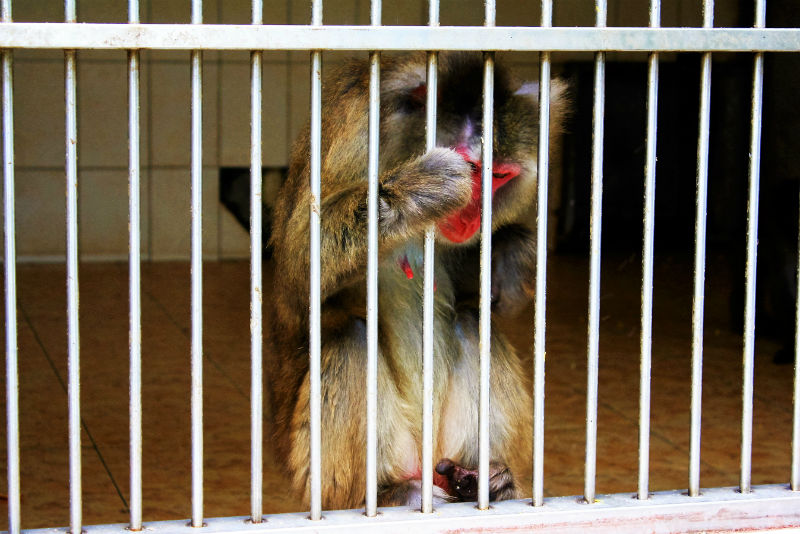 Abkhazia is a poor, and under developed nation. The towns and cities are half empty, buildings are dilapidated and damage from the war with the enemy of Georgia- a bitter conflict that took place as the Soviet Union collapsed in the 1990’s and re-surged again when Russia invaded Georgia in 2008- is still visible and thoroughly tangible. I didn’t expect this monkey sanctuary to have the best conditions, but I wasn’t prepared for the disparate howling that greeted me as I walked through the gates. 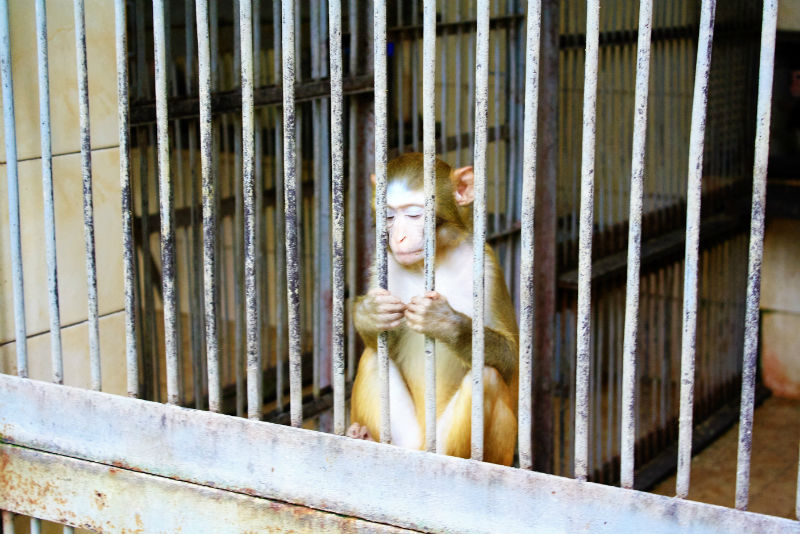 This was no sanctuary. This was a prison. This was monkey hell. 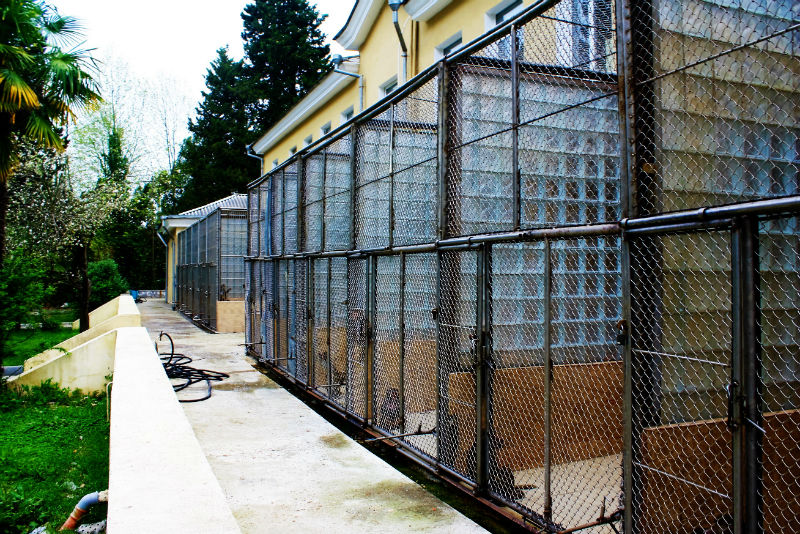 Monkeys stared pitifully from behind their shabby, rusting bars. All hope long swallowed by the grim conditions of their unenviable situation. They were even tattooed, numbered like prisoners in the gulag.

Some reached out, vainly hoping for sustenance, maybe even for freedom. Others reached out in anger, vehemently screeching at the human oppressor, rattling the cages and flinging themselves at the walls. 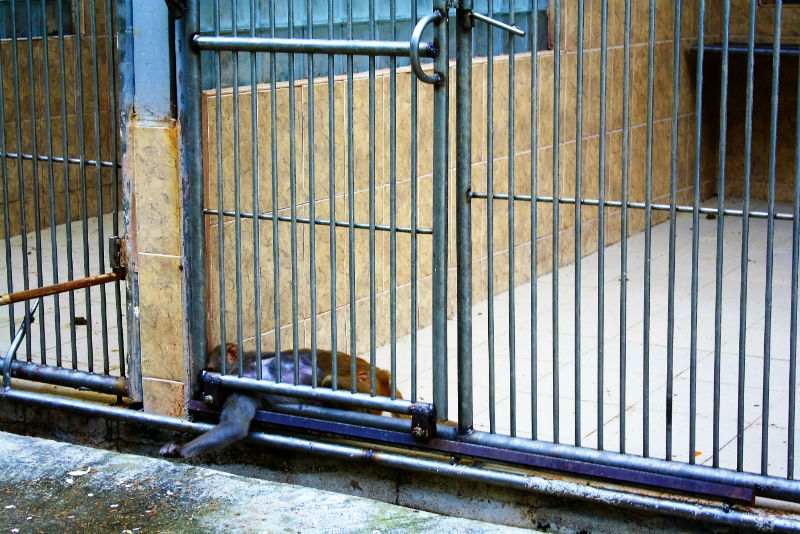 A few were even, it seemed, using discarded rocks, even lumps of metal in a futile attempt to smash their way through the locks that kept them inside.

Still, I wanted to see all the animals that were incarcerated here. And there were hundreds. From the macaques to the baboons, I wanted to look these terrified, angry, despairing and forgotten creatures in the eye, and to let them know that I wouldn’t forget them.

I would tell the world of their harrowing plight. 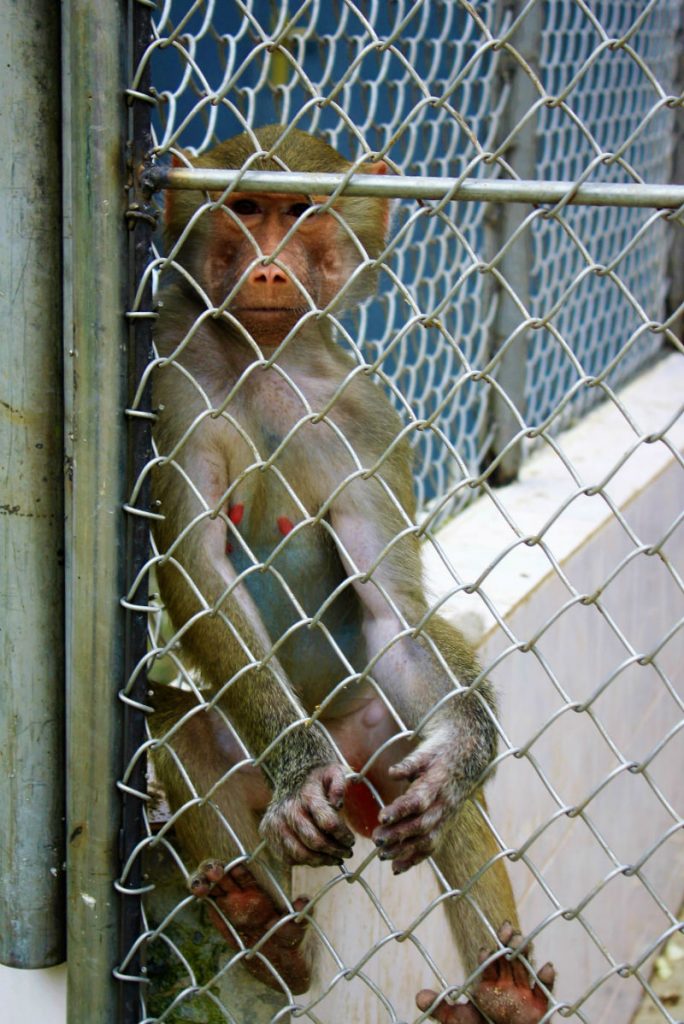 The official name of this monkey prison should have made me question its legitimacy to begin with. The ‘Research Institute of Experimental Pathology and Therapy’ sounds like some heinous government programme you might expect to have been carried out under the auspices of science at the height of the cold war, not a centre for the rehabilitation, care and treatment of the many different species of monkey that have, unfortunately, ended up here. 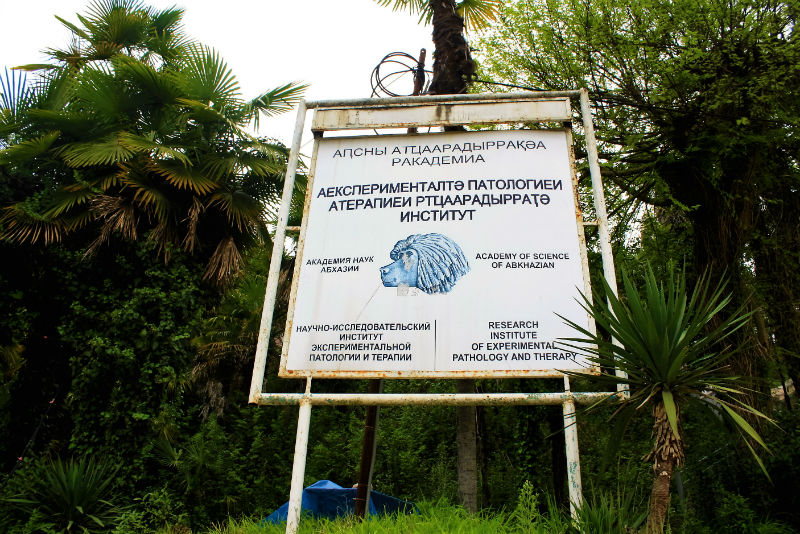 And in many ways, the name is a true representation of this dark institutes history . The monkeys may now be just prisoners for tourists to pity, but in the Soviet days, this was an experimental laboratory. There was little information at the place itself, just a Russian speaking woman who gave out 200 Rouble tickets for entrance, and a man trying to sell meagre quantities of food to visitors to feed the caged monkeys with, but I researched later how this monkey asylum came into existence. The space monkey rumour itself even seems to have some basis in fact. 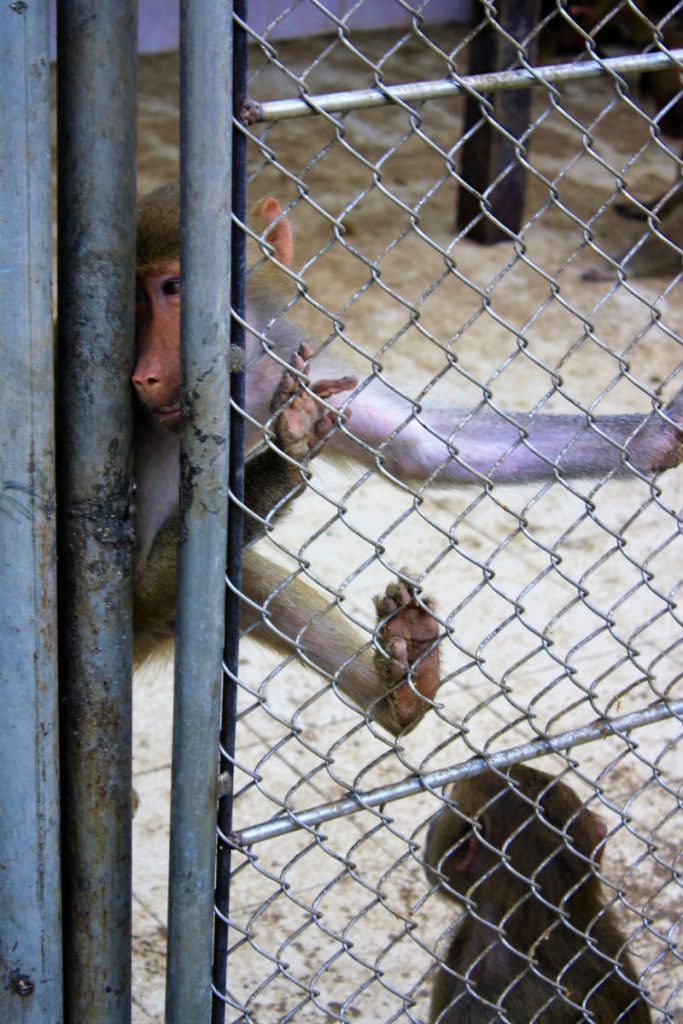 In 1987, a few years before war broke out between Georgia and Abkhazia, two monkeys by the names of Yerosha and Dryoma were launched into space by the Soviet Union. These two monkeys were trained in Sukhumi, which during the Soviet days, was a key research centre, not only just for space research, but in other fields too, such as cancer research and polio vaccinations. There’s even, in recent years, been talk of more monkeys being trained for space missions at the institute here , especially, it seems, as part of potential experiments in a Russian quest to land on Mars. 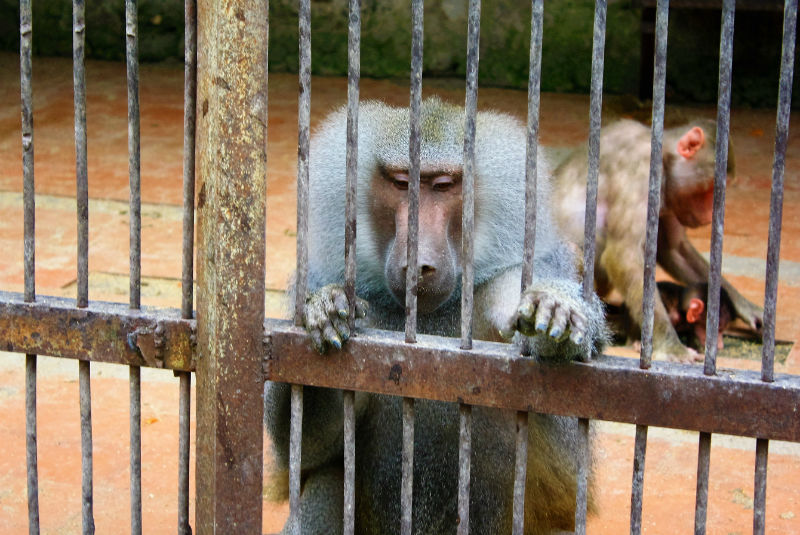 Darker experiments may well have been carried out here too. It’s claimed by several sources, including The Independent, that a Soviet scientist who worked here- a man by the name of Ilya Ivanov- attempted to cross humans with monkeys to create a super race of unstoppable soldiers. It sounds truly incredulous, the workings of an evil science fiction villain, or a mad, mad scientist, but with records lost, hidden or destroyed when the Soviet Union ended, who really knows what took place in Sukhumi? 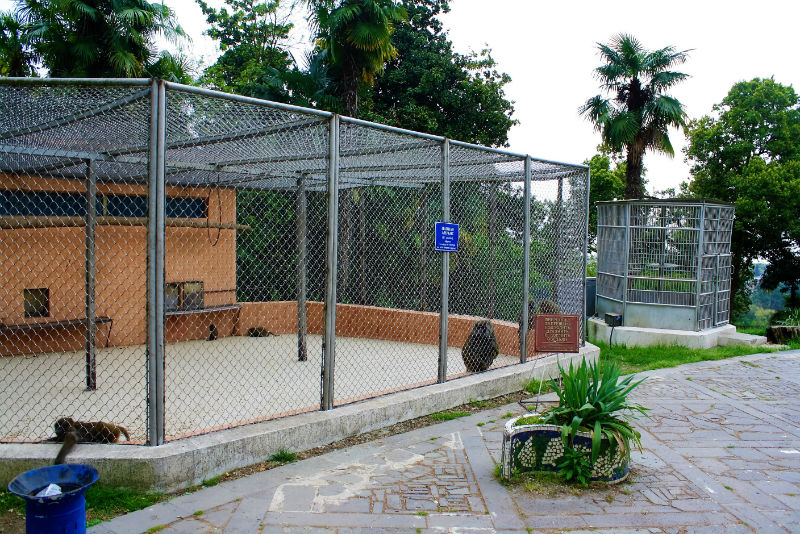 The experiments- true or just simply insane- stopped when the Soviet Union disintegrated. The funding ended, and as Abkhazia went to war, the city of Sukhumi was embroiled in and ruined by the conflict. The monkeys didn’t escape the fighting. Many perished, some were released into the city and many more were neglected. The institute still bears the scars of shelling and bullets today. 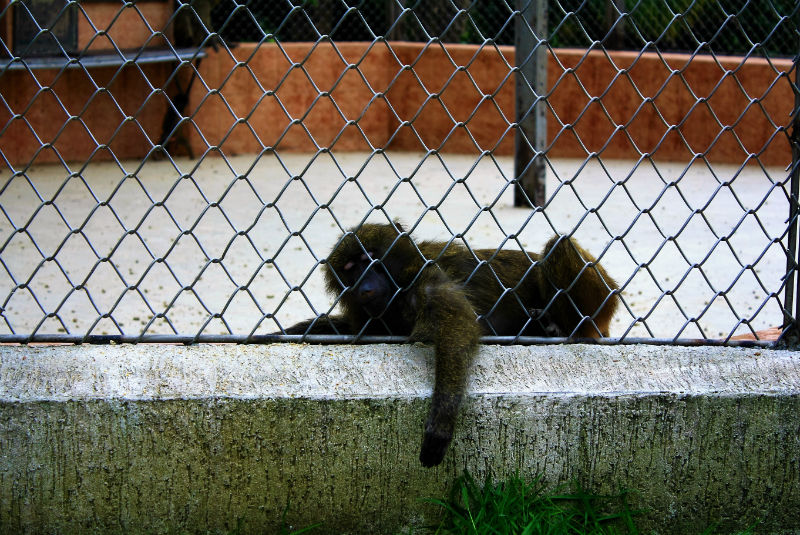 The war and years of isolation has been far from kind to small, forgotten Abkhazia, while the monkeys of Sukhumi continue to suffer the consequences of human actions, as they are mistreated and cling to a vile existence on the periphery of a world that knows nothing about the country they are in, and even less about them. 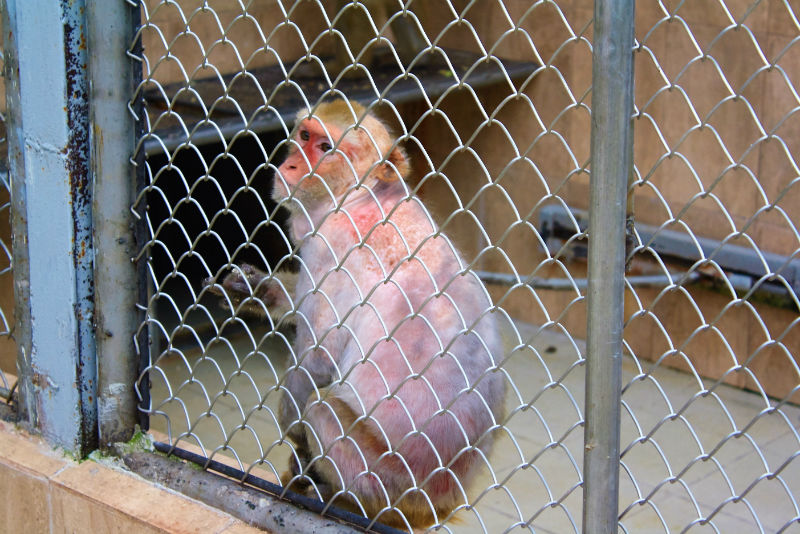 But the unfortunate state of this unrecognised country doesn’t make it any easier to bear witness to this animal tragedy, it is, quite simply, a concentration camp for monkeys, a jail for primates, with a disturbing history, and perhaps even a future too, of experimentation and neglect.

A Dream of Soviet Ape-Men