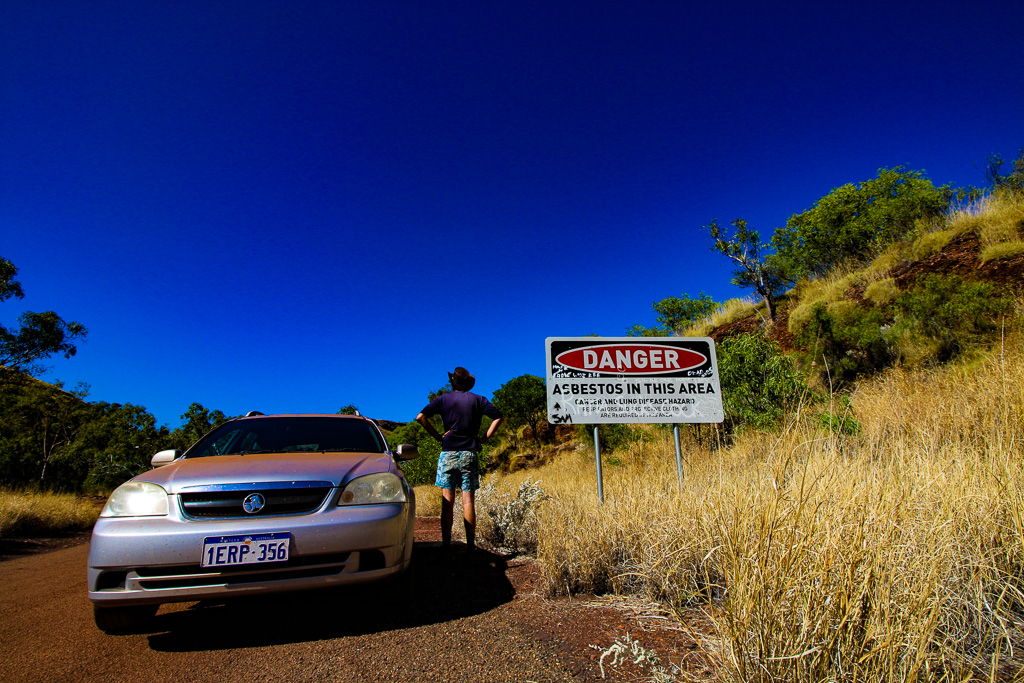 Doc’s Holiday Cafe stood empty and rusting by the single road that leads into Wittenoom town. Layer upon layer of red dust was coated across the tin roof, while fading letters on the side of the building spelt out the name of this former roadside restaurant.

This cafe has stood empty for years. The former Wittenoom blue asbestos mine and its satellite town of Wittenoom- save for a few hardcore residents and the odd reckless traveller- has been devoid of most human life for decades.

Wittenoom is an abandoned town in Outback Western Australia, a place where workers once mined the blue asbestos that occurs naturally in the nearby gorges, and tourists visited to admire the stunning scenery.

I was here to explore the abandoned blue asbestos mining town of Wittenoom. 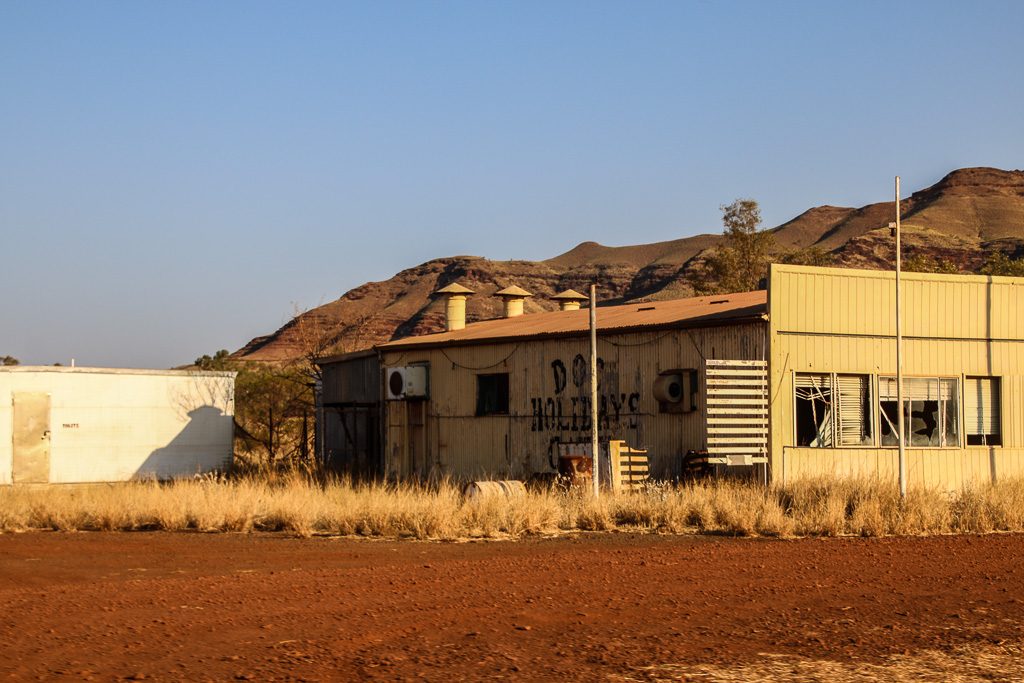 I was in this empty, derelict and abandoned town to see for myself the remnants of an Outback mining town, and to explore the nearby gorge too.

Wittenoom Town and Wittenoom Gorge are in the Pilbarra Region of Western Australia, in the north west of the state. This huge area is a harsh semi arid desert, with scorching temperatures, cyclones and all the best of Australian weather.

The gorge is part of the Hammersley Range, an area of distinct topography that is rich with minerals and metals. Mining companies have a huge stake in the area, although these days they are focused on the iron ore rather than the blue asbestos of previous years.

Wittenoom gorge is beside the vast and beautiful Karijini National Park, although outside the boundaries itself, and I was eager to see how the scenery here compared to the rest of Karijini. To get here, I would be following old dirt tracks and mining roads. The nearest functioning town is over 100 kilometres away, and Wittenoom has literally been erased from the map…. 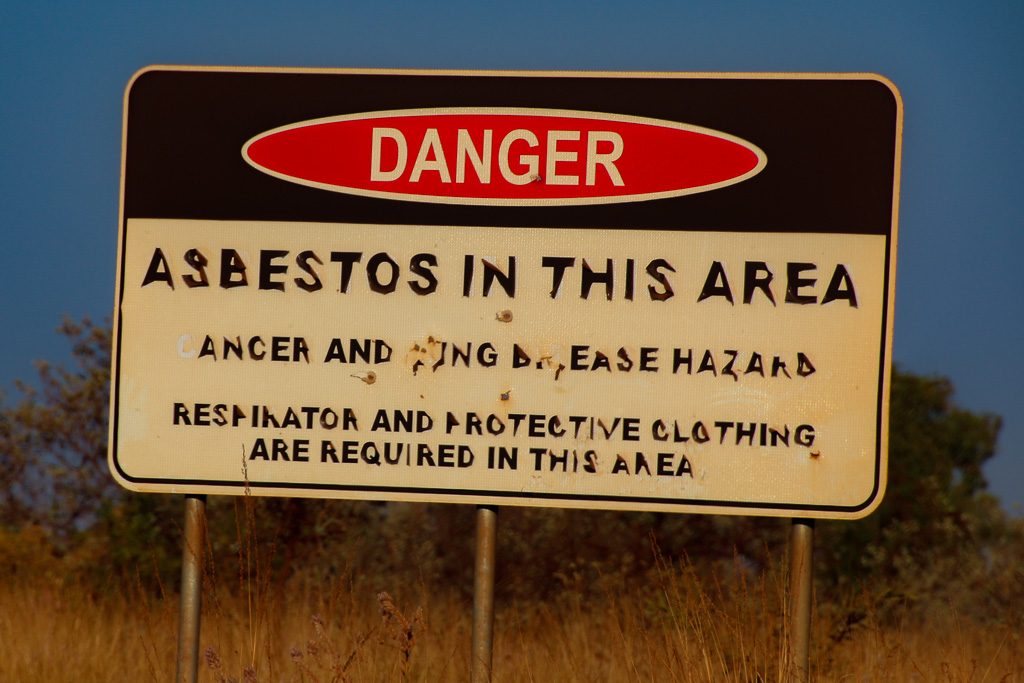 The Road Signs Have Been Erased…

In the car from Tom Price- the nearest town- I’d passed signs along the dirt road that had blanked out the name Wittenoom. The Australian Government doesn’t want you visiting, what with all the asbestos they used to mine here.

The town has literally bee wiped from the map. Local tourist brochures just leave a vague, blank area where Wittenoom actually is, and the National Park maps don’t feature the town, despite covering everywhere else within a thousand kilometre radius.

Wittenoom has been this way for a while. It was once a thriving, mining town- before the deadly effects of blue asbestos were known- and was even the largest town in the entire Pilbarra Region.

The government shut down mining operations at Wittenoom in 1966, when health concerns began to grow.

The town continued though, hosting tourists and business for the next few decades still. Gradually though, Wittenoom emptied, as services slowly located to other towns, schools eventually closed and residents moved away..

Today, only a few residents still call Wittenoom home, living in the deserted town with no amenities or services. 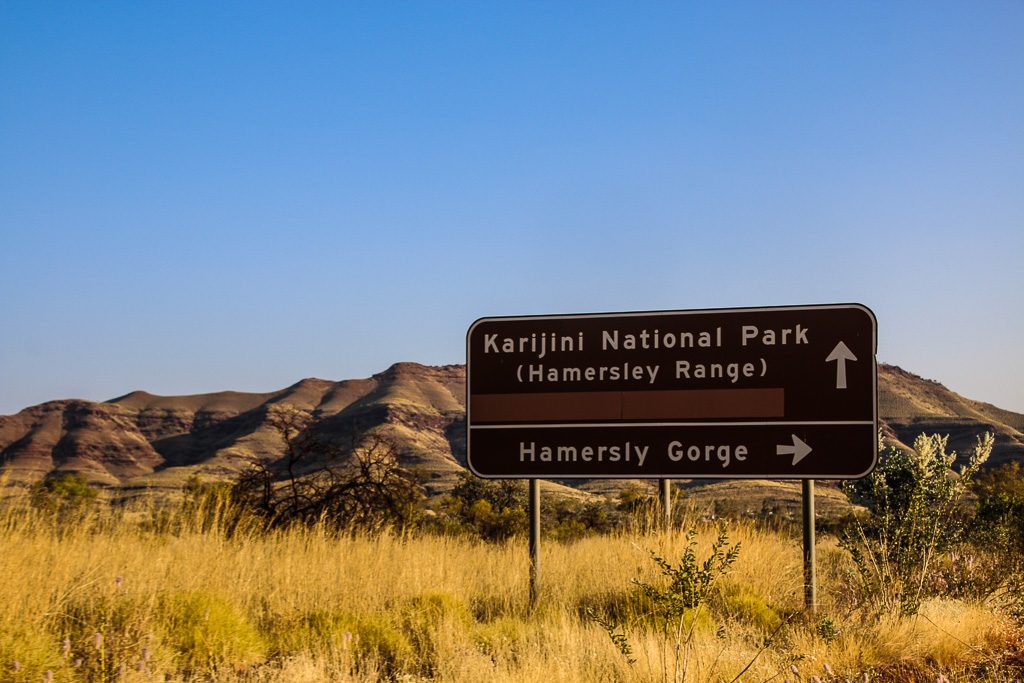 The Dusty Red Road To Wittenoom

The road into Wittenoom was bumpy, rocky and dusty. Despite the removal of the town from road signs, it wasn’t difficult to find. It was the only town along the single stretch of dirt road I was on.

As I neared the town, more warning signs appeared on the road too, declaring that I was entering an asbestos zone.

I was taking a calculated risk of course. The Australian Government strictly advises against all travel here, and the risk that asbestos poses is of course well documented and researched.  The asbestos hasn’t been mined here in years though, I wasn’t visiting the mine itself, and certainly wasn’t planning on clambering over raw blue asbestos or disturbing it in anyway- at least not deliberately- and I would only be in Wittenoom for one night. At least that’s what I tell myself. 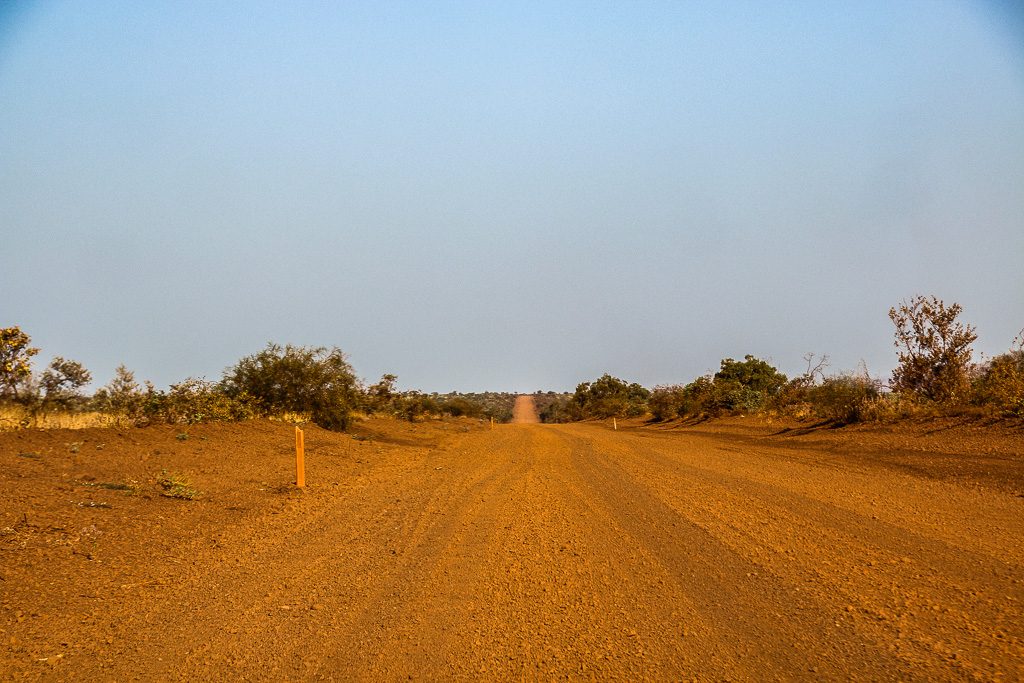 The road in was empty, with just the odd mining vehicle speeding along to some isolated outpost in the desert.

As I neared Wittenoom, the ridge that shadows the town appeared on the horizon.

This was Wittenoom Gorge. 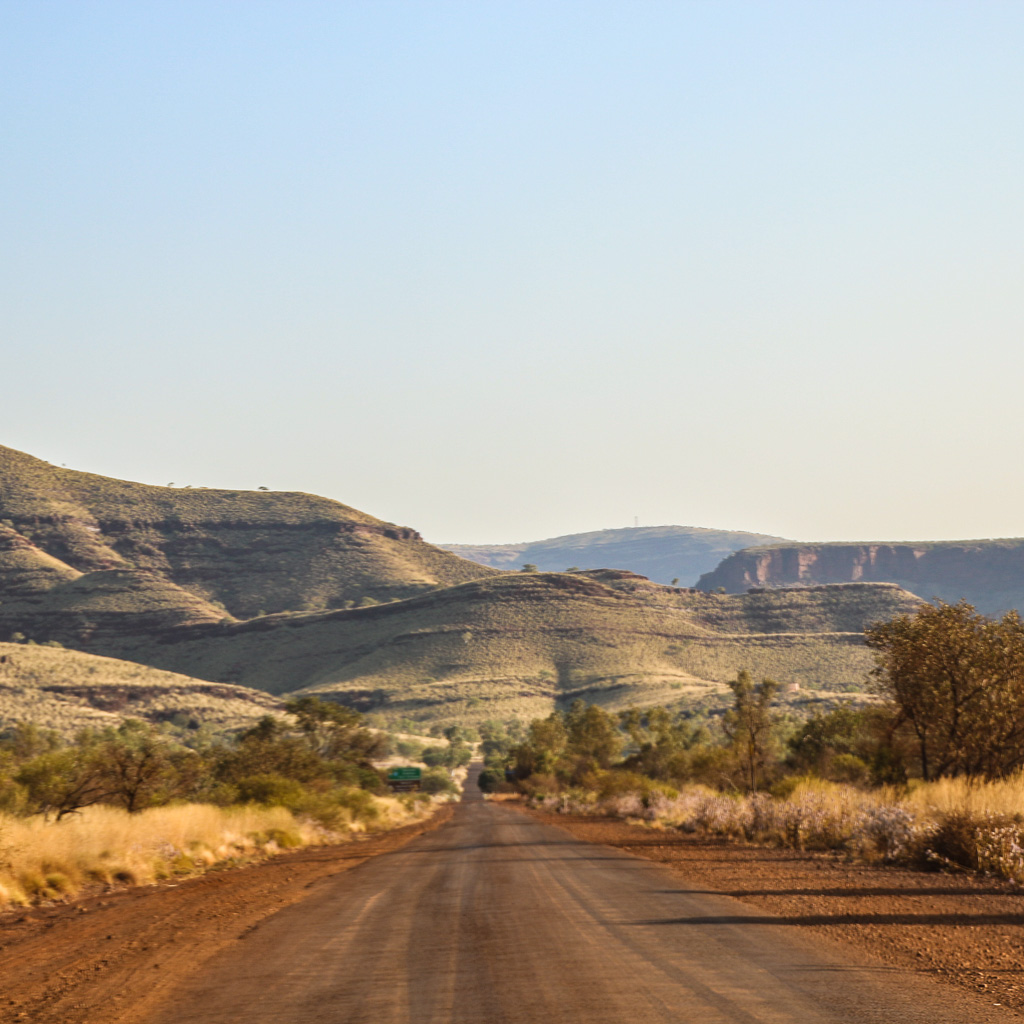 This Was Once A Tourist Destination

On the edge of town is Doc’s Holiday Cafe. I stopped here, an empty petrol pump stood in the dusty driveway, and the shuttered windows of the cafe were crawling with vines.

Wittenoom was once a tourist destination. Being the largest town in the Pilbarra, it was the site of hotels, shops and cafes catering to travellers.

The gorge, I’d heard, was spectacular too. The tourists that now visit the gorges of neighbouring Karijini National Park would have visited Wittenoom Gorge too back in the day. Although for them, the danger of the asbestos would have been more real than it is now.

I read that tours even ran to the blue asbestos mines themselves. 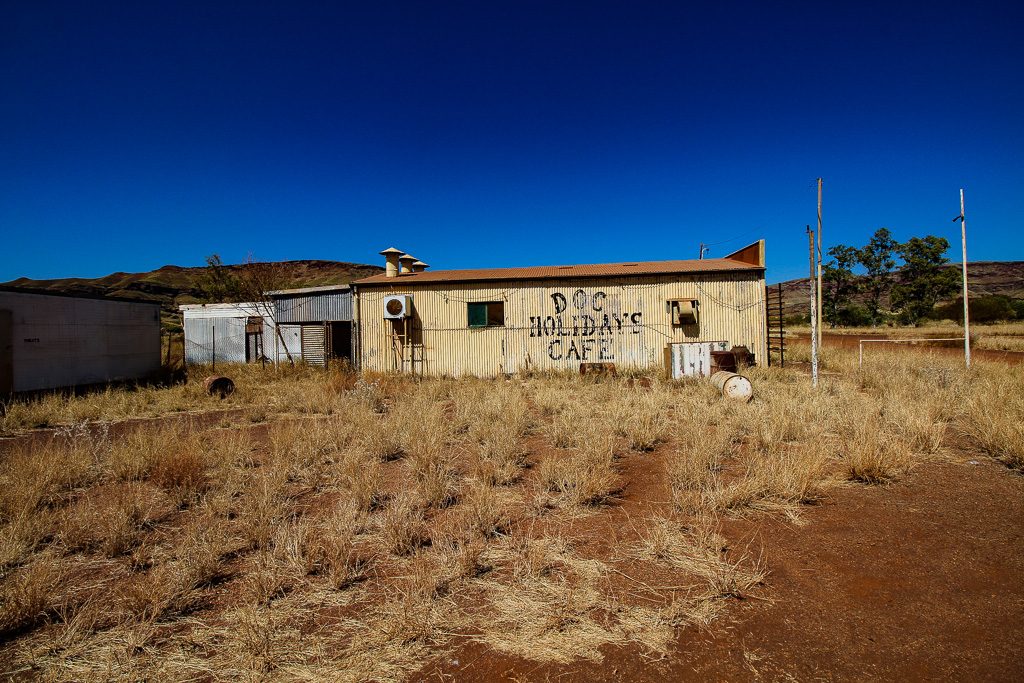 Despite the government’s efforts to relocate the last remaining residents after they de-listed the town in 2007, a few still remain. ABC reported the most recent population census at a grand total of 3.

It was a strange experience. The town was empty. Deadly silent.

A few buildings were obviously beyond repair, but some looked in better shape. It was difficult to tell which buildings- if any- the remaining residents actually lived in. Not wanting to disturb them, or trespass, I kept to the streets- just as I would in any town really…. 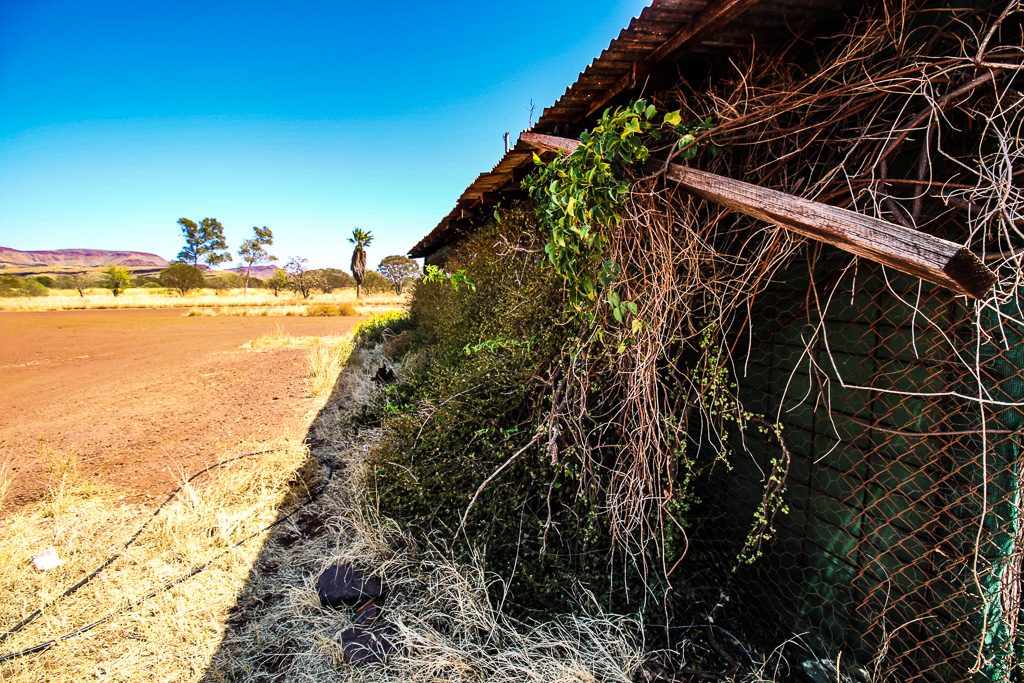 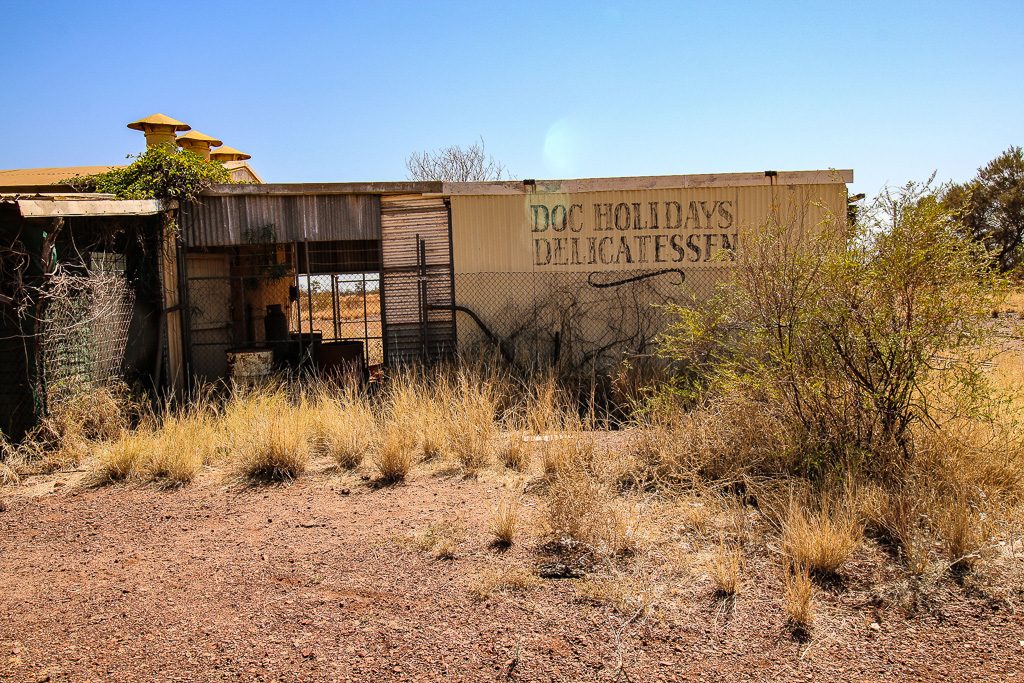 The roads in Wittenoom township itself were paved, although potholed and crumbling after years of disrepair.

It was never a huge town, and with just four or five streets it didn’t take long to navigate from end to the other. 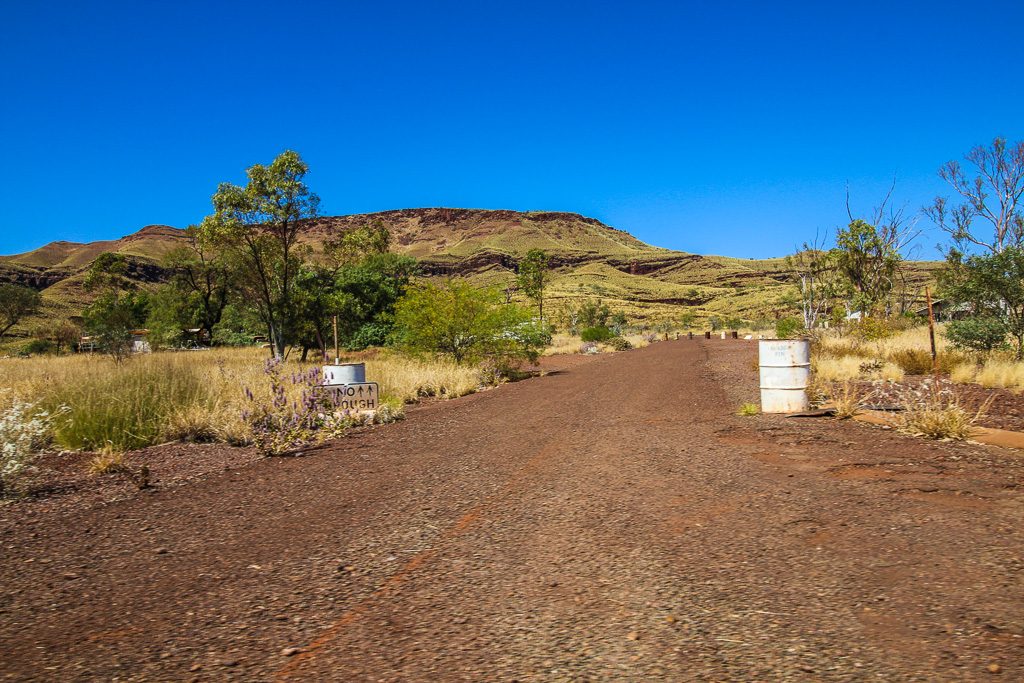 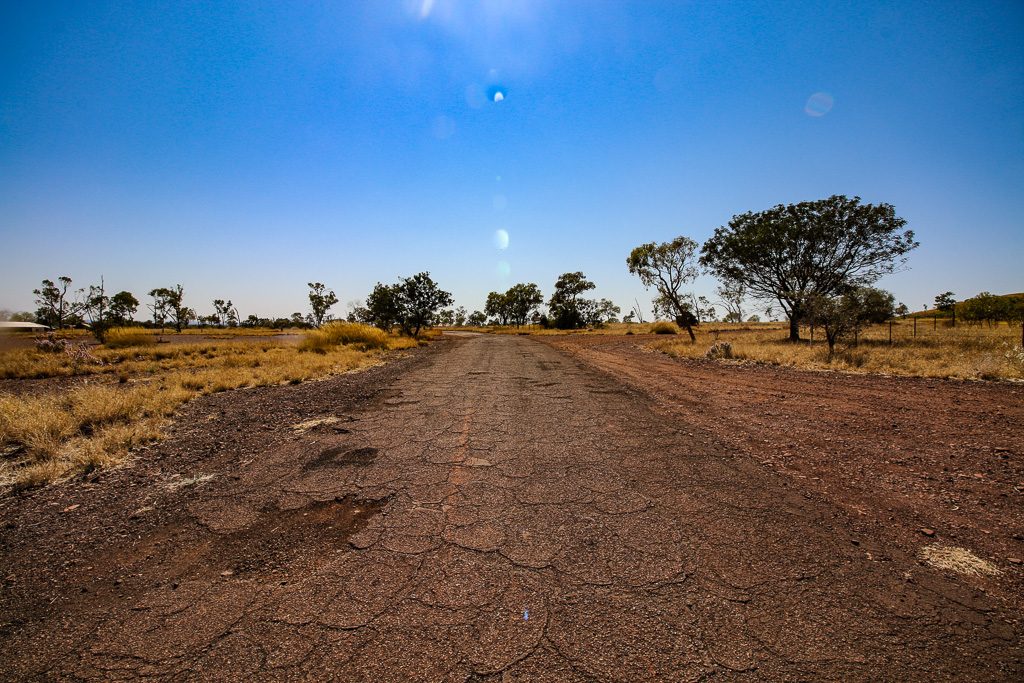 An old telephone box was slowly falling apart and pick up trucks were rusting in the ever growing grass. 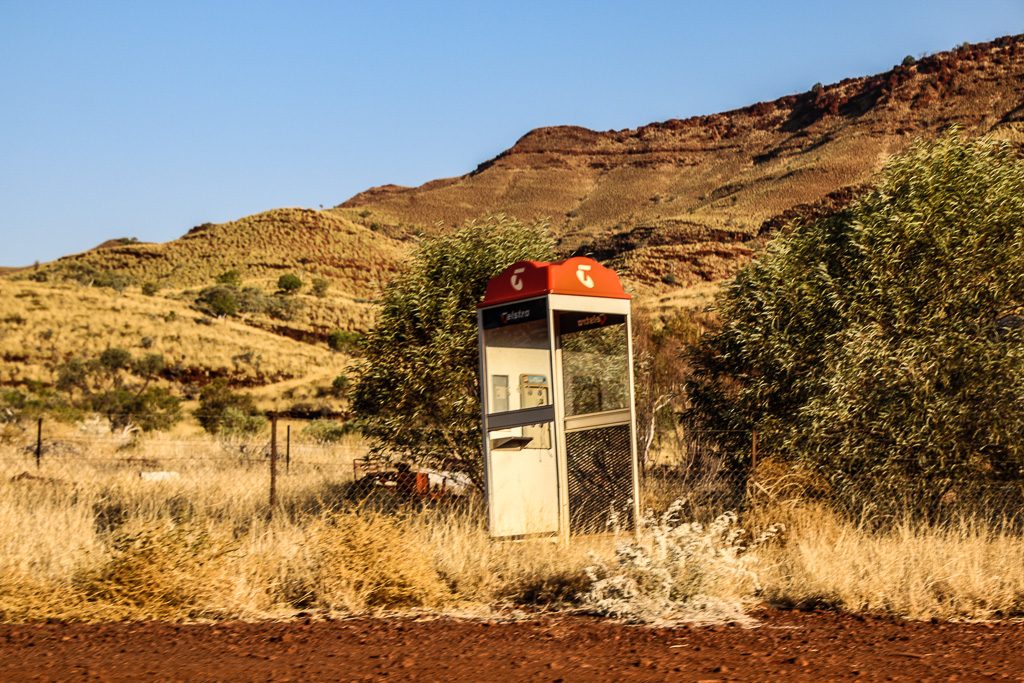 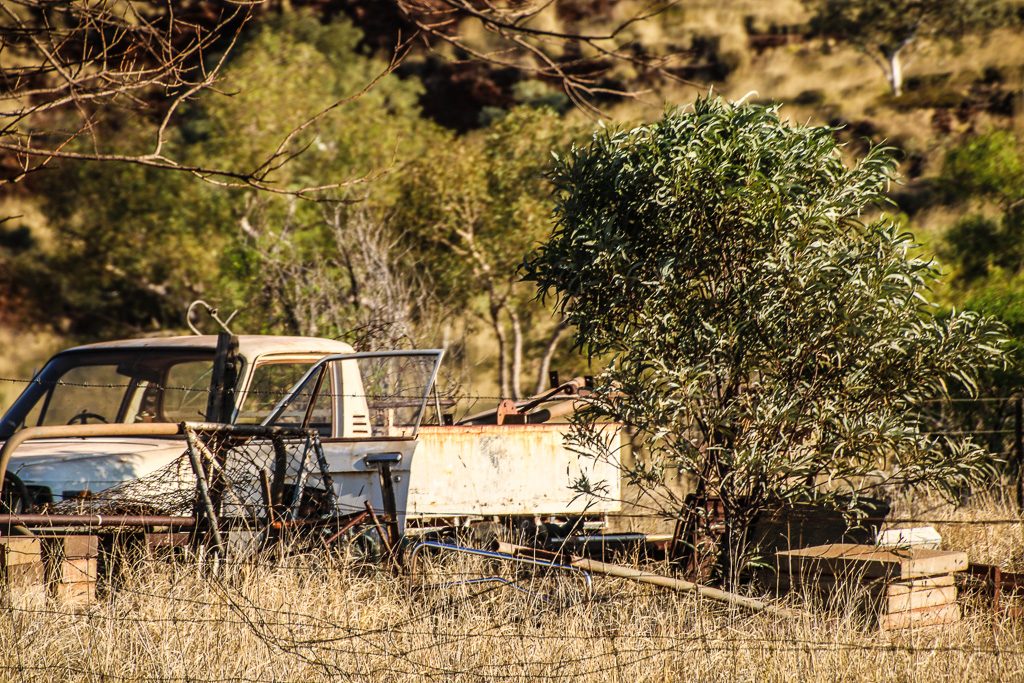 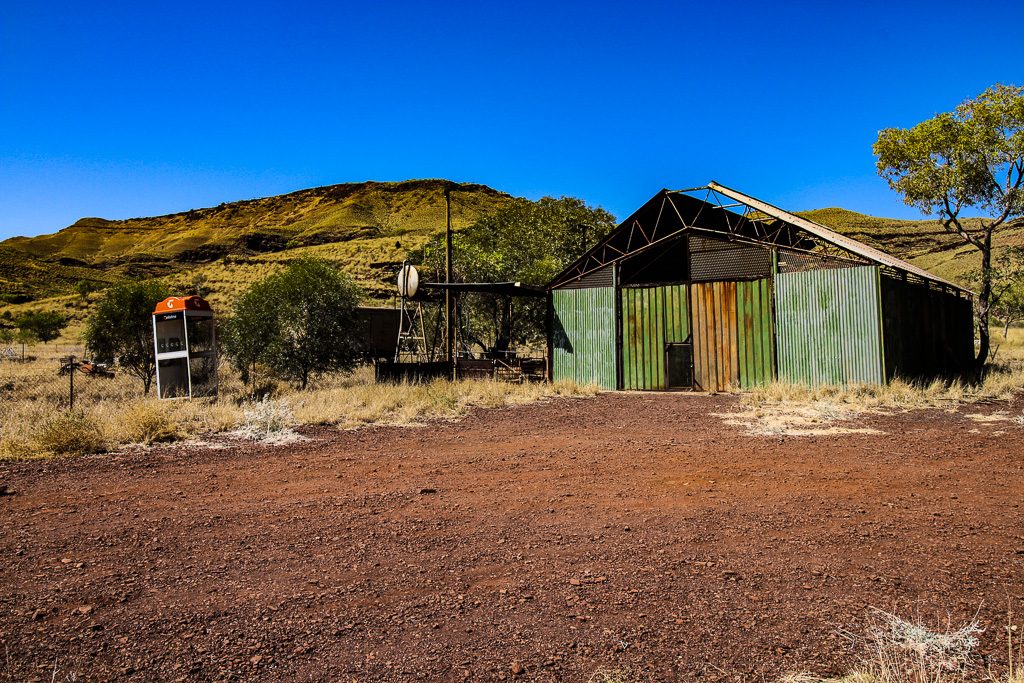 Wittenoom Gorge is as infamous as the now abandoned town in the Pilbarra.

It’s not only where the vast quantities of blue asbestos were found and mined, but it was also a beautifully scenic spot that was a favourite amongst tourists and locals alike. It’s a strange, almost terrifying history that surrounds this place.

And it here was here that I was going to spend the night, in Wittenoom Gorge. 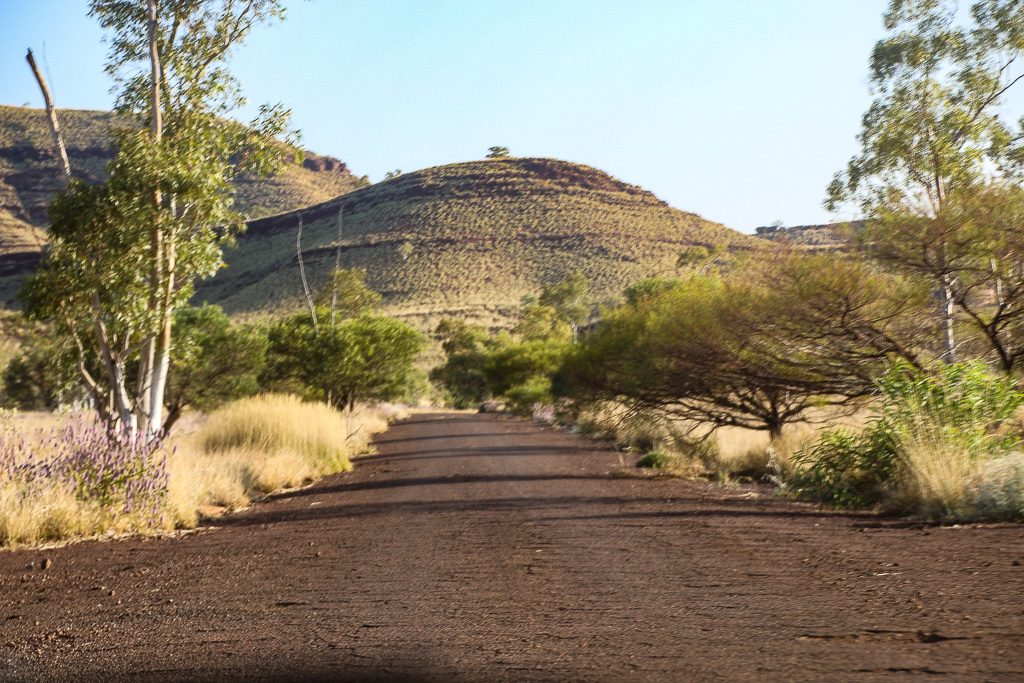 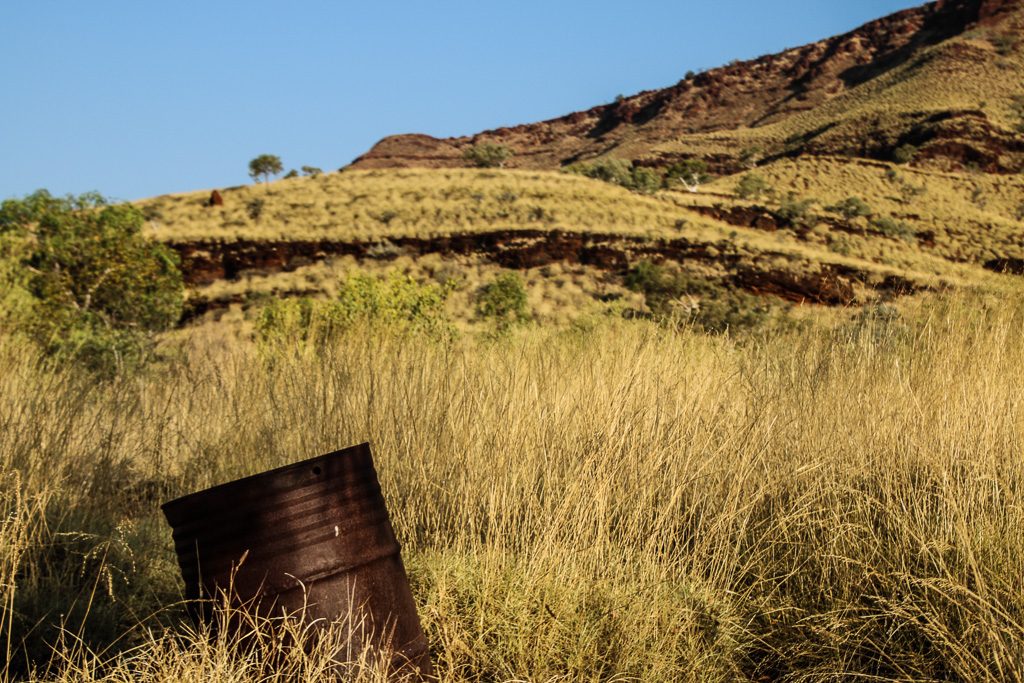 I’d been told by a few guys at the Karijini Eco Retreat that once in Wittenoom, all I had to do was drive towards the back of the town, towards the ridge, and aim for the water tower on the hill. This would lead me straight into the gorge itself.

The road was easy enough to find, and I passed old rusting houses and dilapidated sheds being over taken by grass and dust. The road was even tarmacked, like the rest of the town, at least for the first few kilometres. 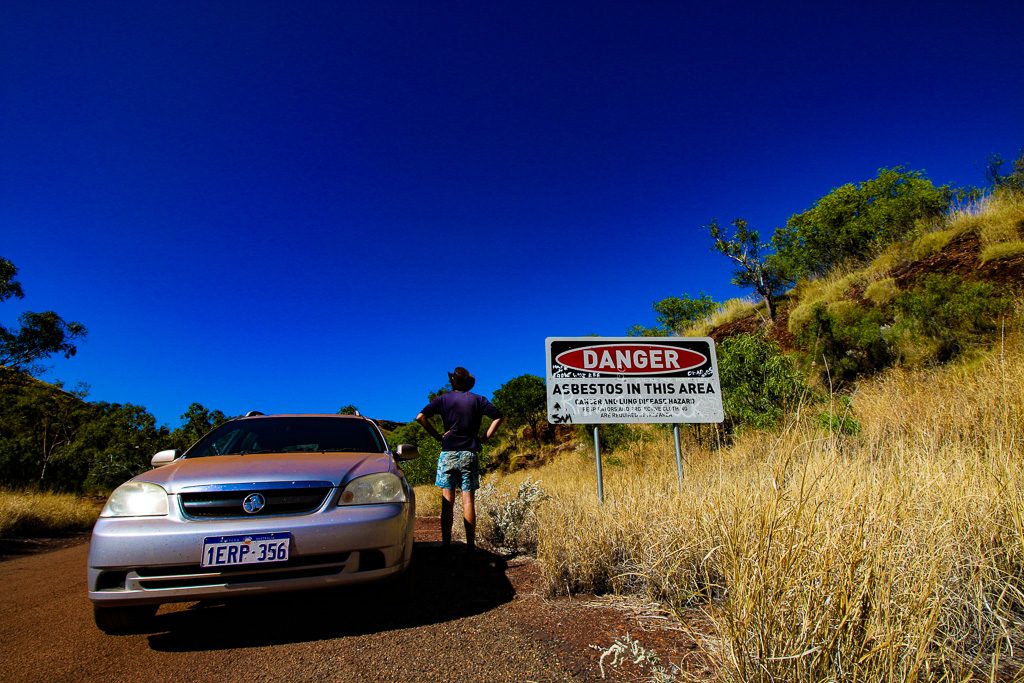 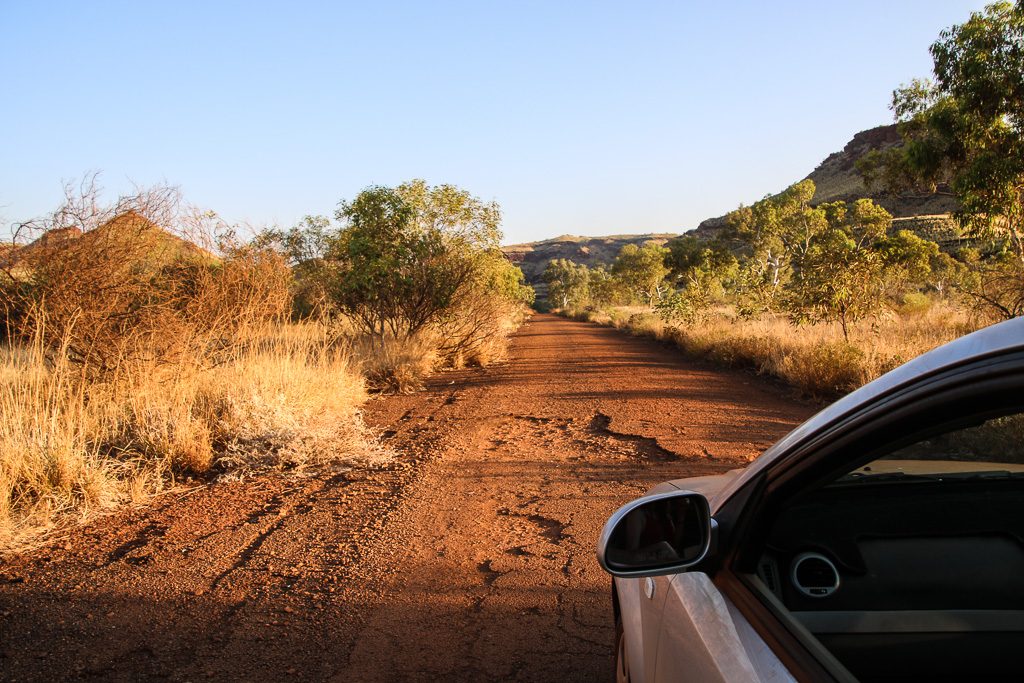 The road soon began to degenerate though, as the walls of the Wittenoom began to close around the car. There were small streams to traverse, and old causeways across creeks had over the years simply been washed away, leaving huge chunks of concrete-and probably asbestos- just littering the road.

I was aiming for a few camping spots by the river, a few kilometres into the gorge, which was supposedly accessible by two wheel drive. 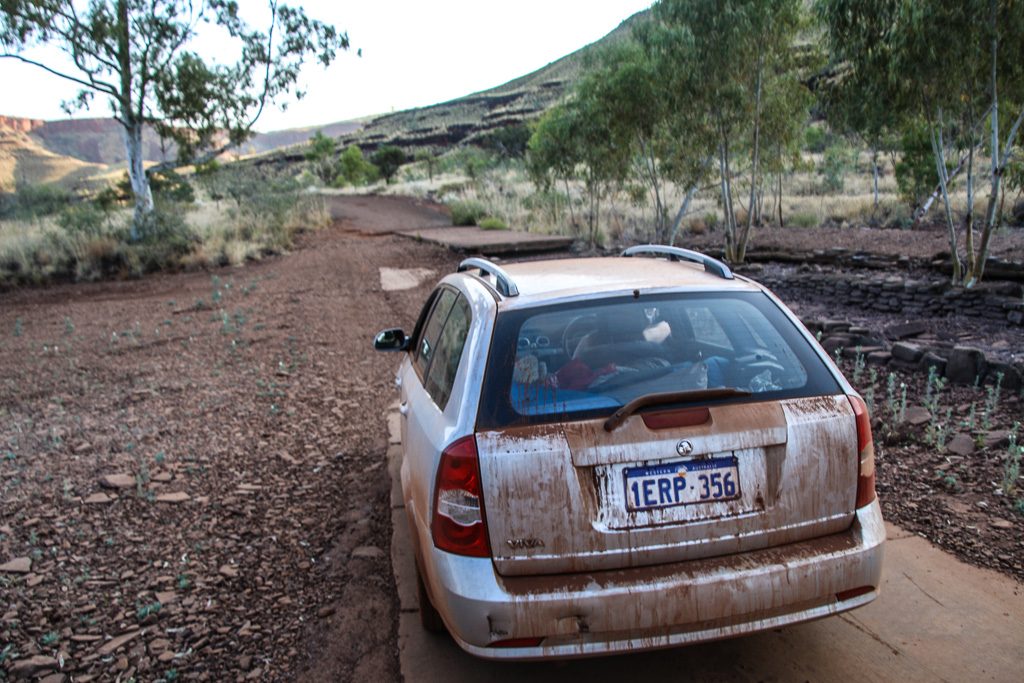 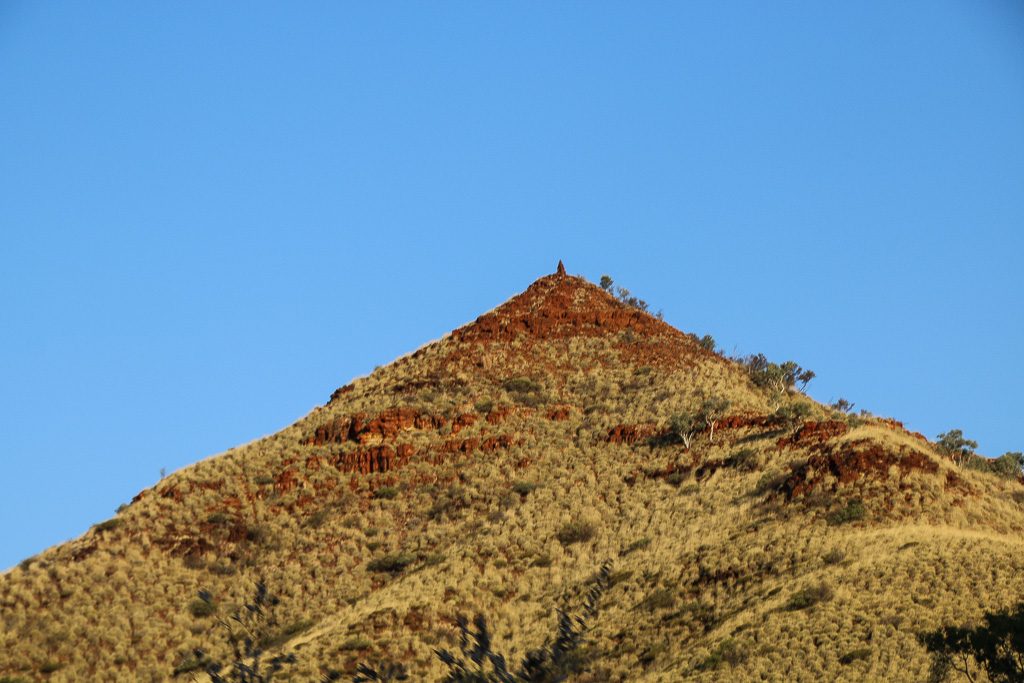 Wittenoom Gorge was, in its red and rocky way, a spectacular place. I could see why tourists flocked here for years, and why a brave few still continued to live in the town itself, even with the inherent danger of asbestos constantly permeating the mood.

The going was tough on the car though. It was slow, with most of the time spent watching out for jagged rocks that could spell a disastrous end to a tyre out in the wilderness. 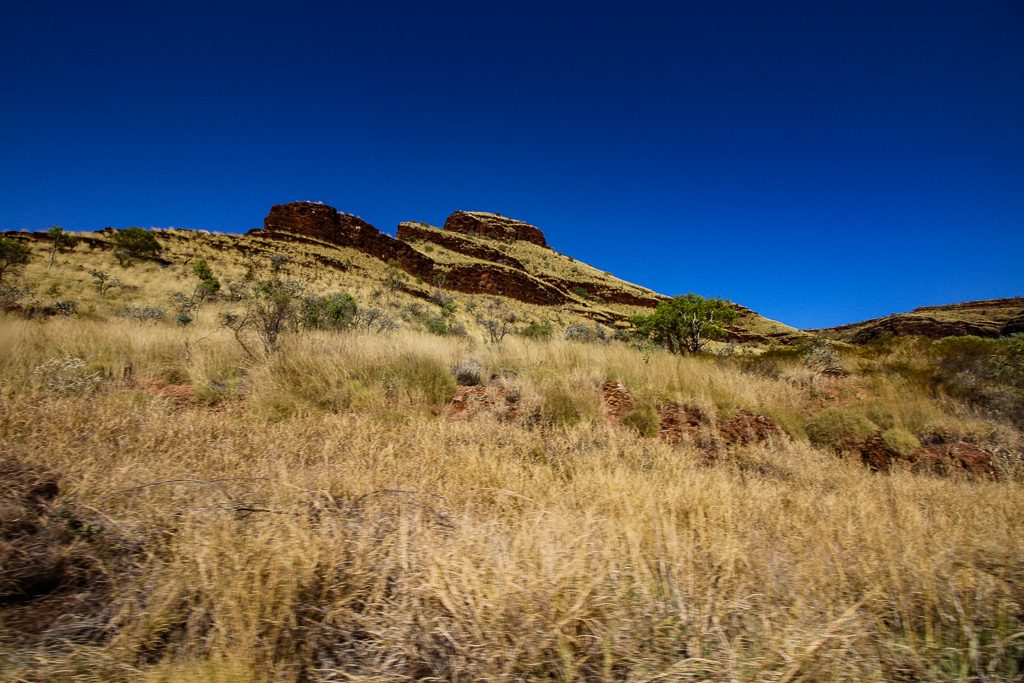 Camping Out In Wittenoom Gorge

The real appeal of Wittenoom is its current isolation away from the world. I had just spent time in the Karijini National Park, a beautiful place, with excellent swimming and hiking, but at the time of year- the winter months- it was constantly busy, and the restrictions were numerous.

Out in Wittenoom Gorge, few people dared to venture. I passed one couple in their caravan, who had a nice spot by the river and had been there content for a few days, and the remains of a few camp fires were sporadically spread along the Gorge. 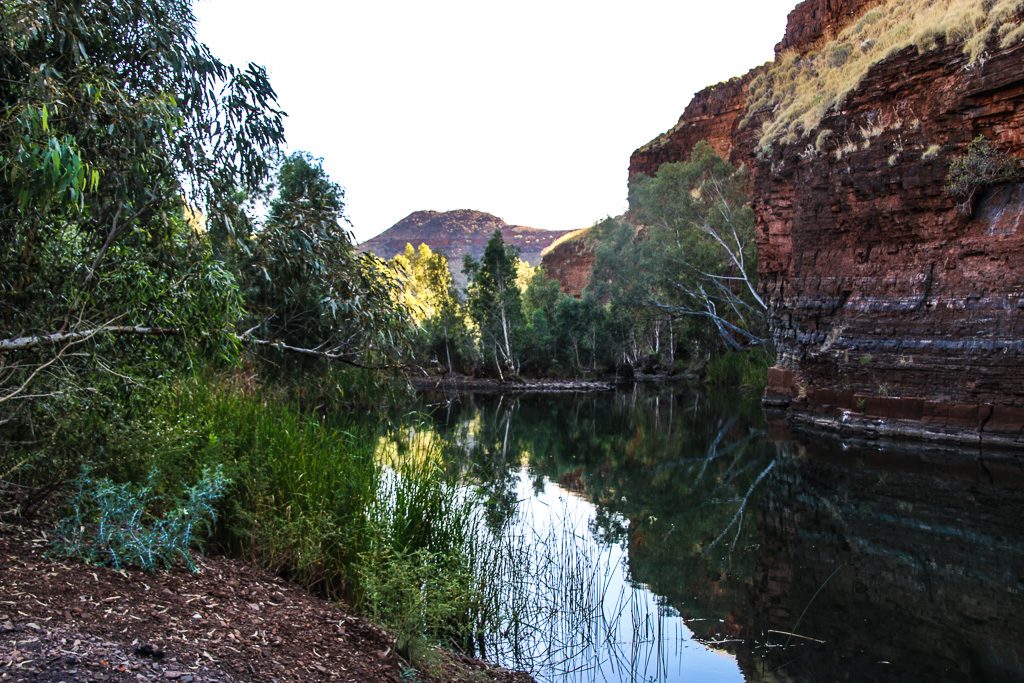 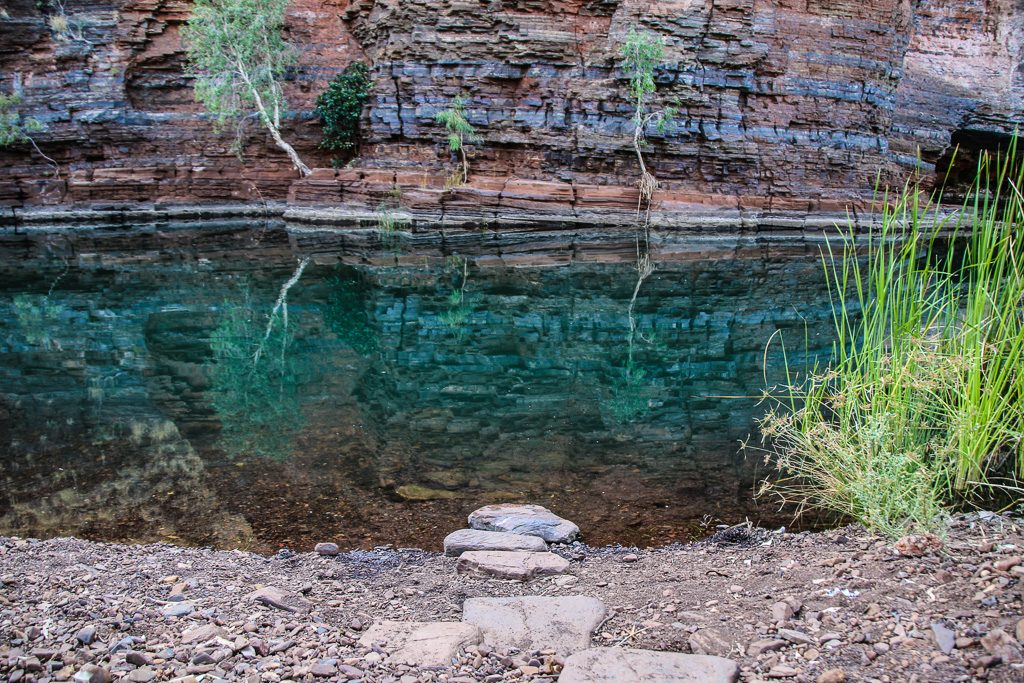 Other than this, it was an empty place. A place that was being reclaimed by nature, where wildlife found sanctuary and intrepid campers found peace.

I had a spot by the river, surrounded by trees, with the gorge rising ahead of me and blue water running alongside.

Being outside the National Park meant that at this time of year there were no restrictions on camp fires either.

I got the fire roaring, cooked a dinner of sausages and burgers, cracked a few beers and settled into Wittenoom Gorge for the night. 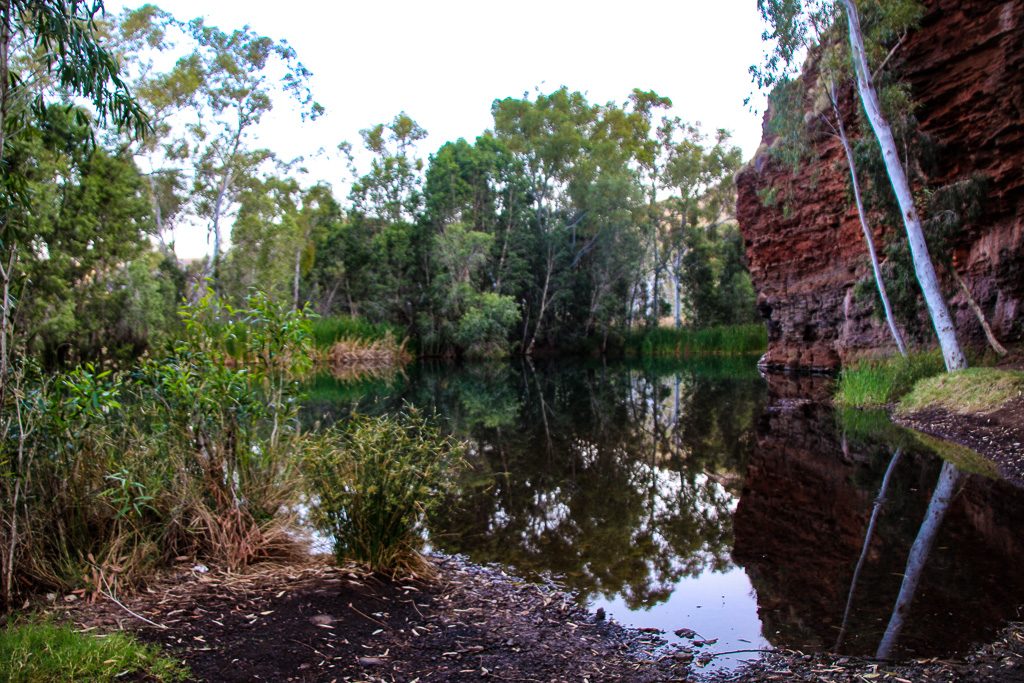 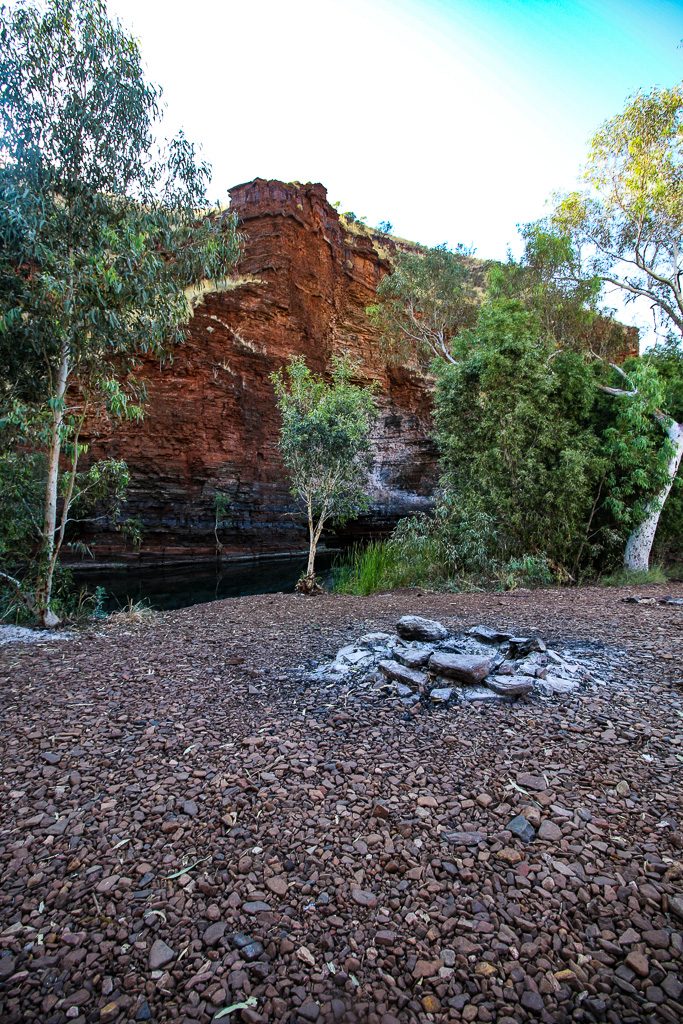 Travelling to Western Australia? Then why not support this blog by booking your accommodation through our partners at Booking.com! There’s no extra charge to you, the customer, but you’ll help me to keep creating more awesome content like this! Just click HERE!