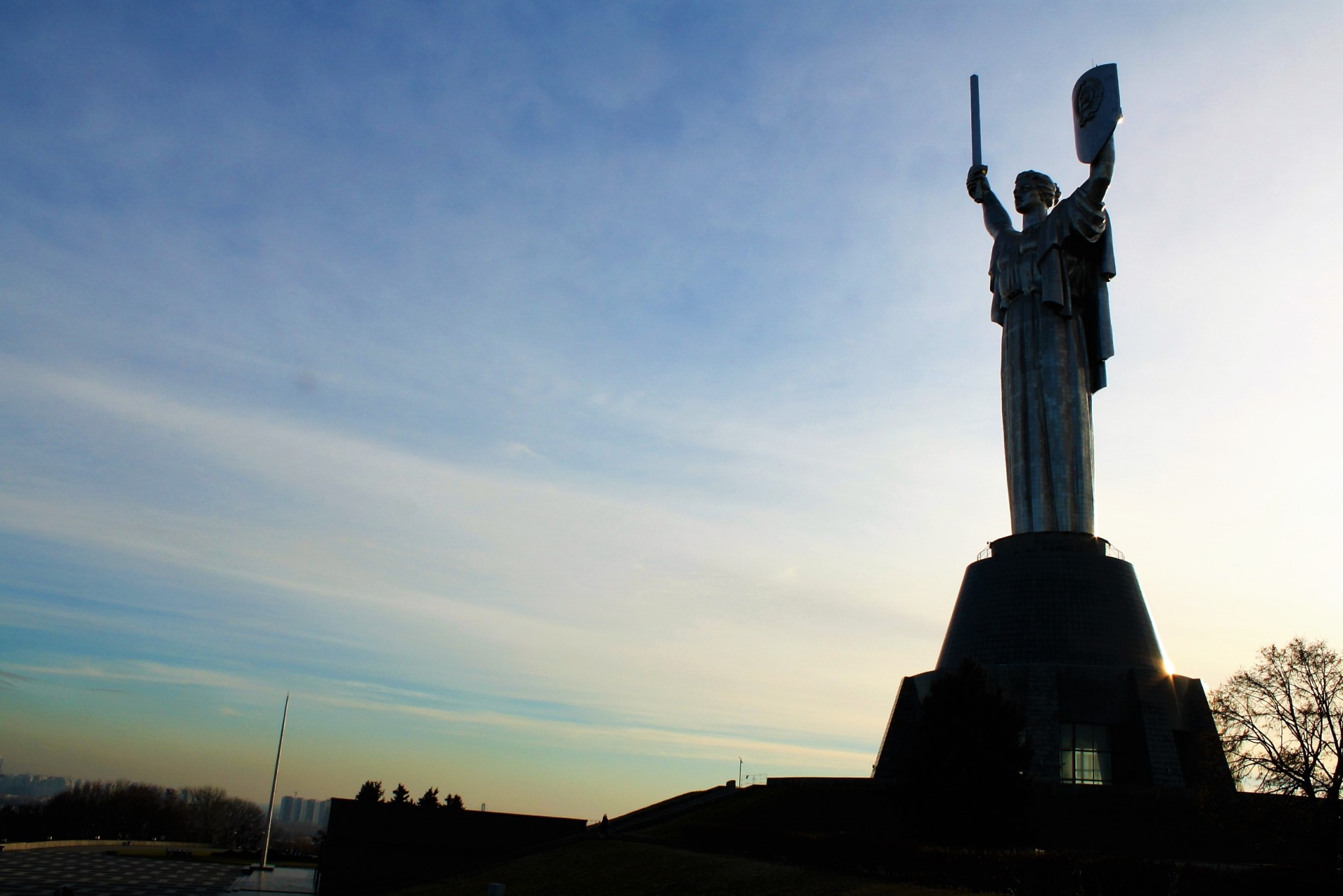 War and Peace in Ukraine. Is Kiev Safe To Travel To?

This was a question I pondered furiously over in Moldova when deciding where in Eastern Europe I should travel to next, is Kieva safe to travel to? I could go back to Romania, but that was the way I’d just come from. Or I could risk it all and cross over to Ukraine, a country that intrigued me, but at the time was undergoing massive security disruptions in the East, as all out war raged against separatists on the Russian border. It would be great to see Chernobyl though. 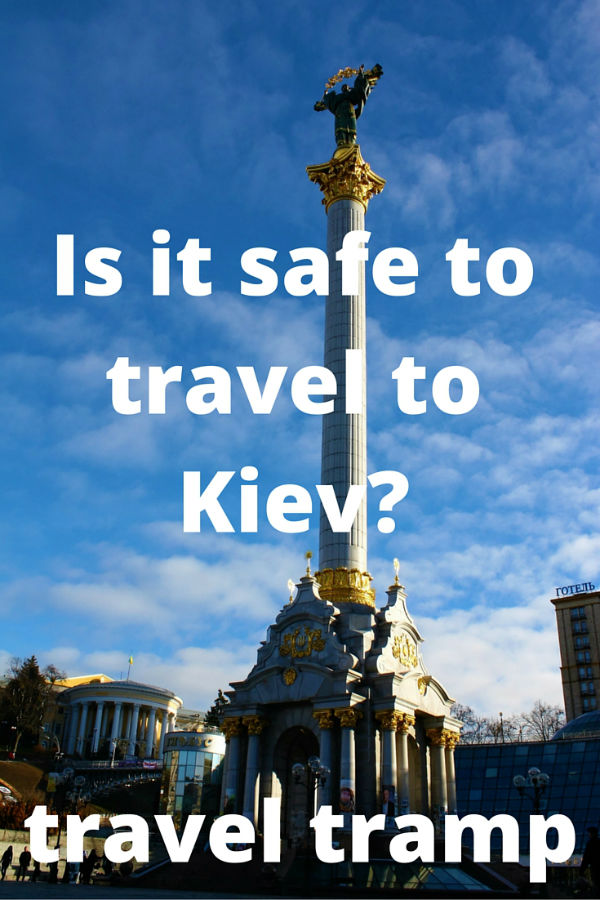 Kiev however, is miles from the fighting. There was only one way to find out anyway, and that was to actually visit Ukraine’s capital and then answer the questions myself, is Kiev safe to travel to?

I went down to Chisinau’s station and booked onto the next bus.

Twelve hours and several border and security checks later, I was standing bleary eyed in the intolerable winter cold of Kiev’s main bus terminal, pushing away taxi drivers and looking for the metro station. 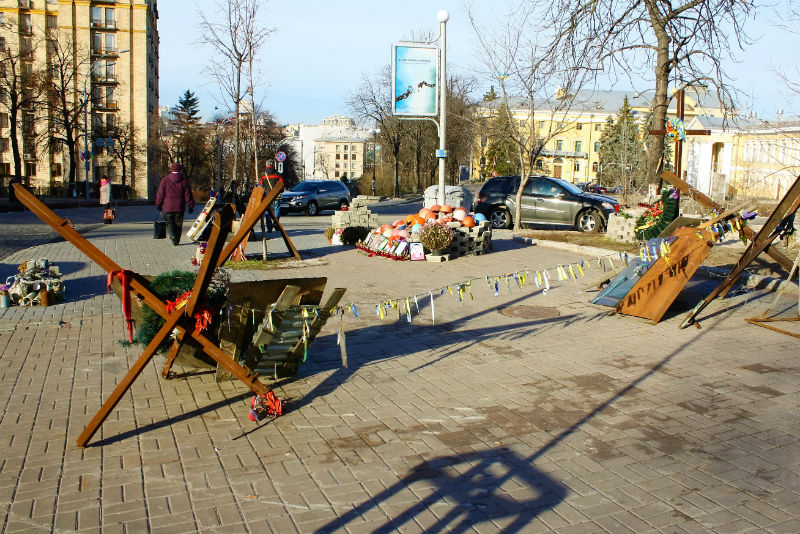 Kiev has one of the deepest underground metro systems in the world, the elegant stations are reason enough to warrant a visit to the city on their own, and on the long escalator ride down to the platform I warmed up in the heat of the crush and claustrophobia of rush hour.

My accommodation, which became more home than hostel over the next week, was right on Kreschatyk Street, the central thoroughfare of Kiev, and just around the corner from Maidan Square, the scene of the infamous protests that led to the Ukrainian Revolution in 2014 and which in turn led to the separatism and conflict on the Russian border. 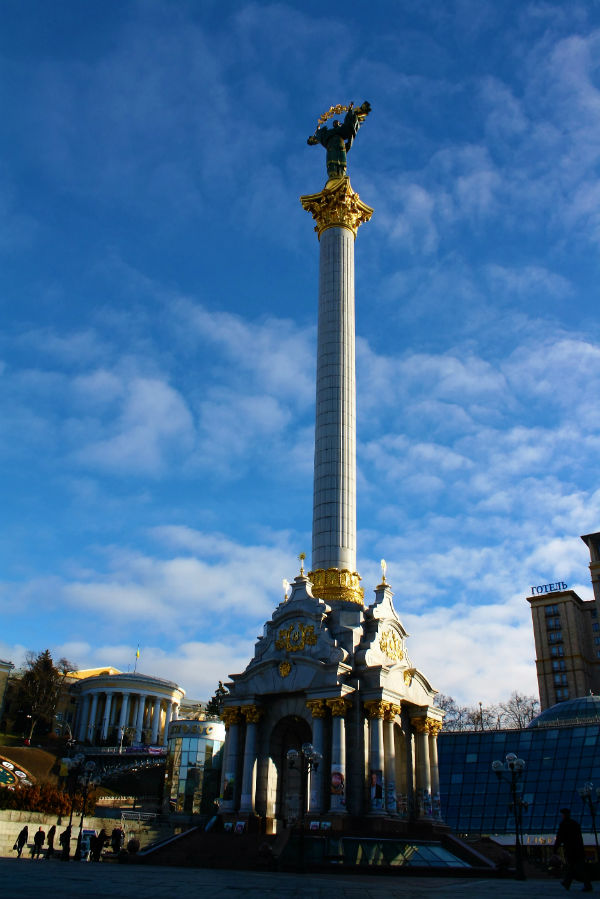 Revolutions and Bloodshed in Kiev

Maidan Square was the scene of revolution and bloodshed.

You probably saw the protests on TV and the violent images on Facebook. To give you an improbably short summation and wide generalisation of what became known as ‘Euromaidan‘, essentially the citizens of Kiev and much of Western Ukraine decided they’d had enough of the current government of Viktor Yanukovych, who was pressing for closer ties to Russia and Putin. After violent crackdowns by the government across the capital, Yanukovych was eventually chased out of the country and a new government was formed to lead Ukraine into a closer relationship with the European Union. 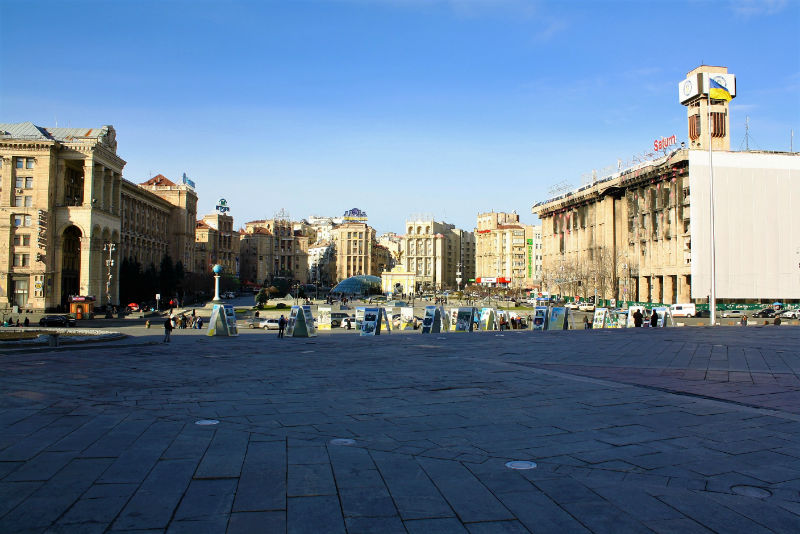 Now, this is where things got even more complicated, as if they weren’t complicated enough already. Ukraine has a long history with Russia, a history I won’t even attempt to explain here, and the Eastern Provinces decided this was a good excuse to begin fighting for separation from Ukraine, and hoped for Russian annexation, much as occurred in Crimea. And the conflict escalated from there, and is still far from any resolution as I write this now. 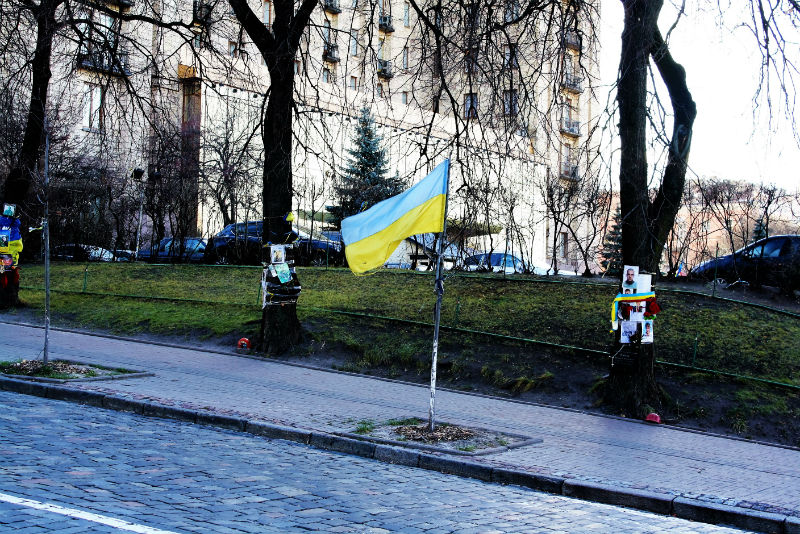 Kiev Is A Long Way From Conflict

Kiev is a long, long way from the conflict. But walking through Maidan Square, the scars of the revolution still mark the buildings and monuments.

Across from the Independence Monument the burnt out remains of the Trade Union building still stands in the square. The building was torched during the protests, leading to a high death toll amongst emergency workers and protesters. The rest of Maidan, where before there were barricades and blockades has been cleaned up and repaired, but the blackened husk of the Trade Union Building has been left where it burned. 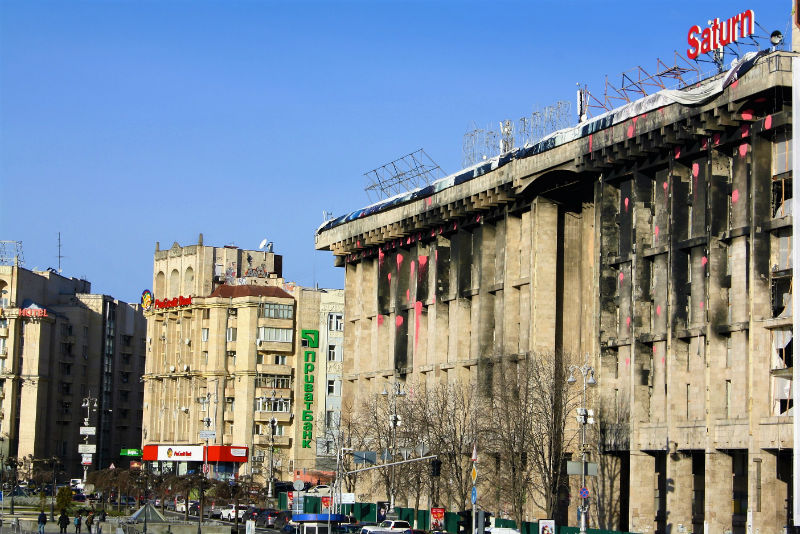 Surrounding the square are memorials to the those killed during the protests in Kiev, protests which turned bloody. Thousands were injured and hundreds would be killed as violence rocked the streets.

Pictures, flowers and memorials adorn the streets of Kiev in memoriam to those who were lost. 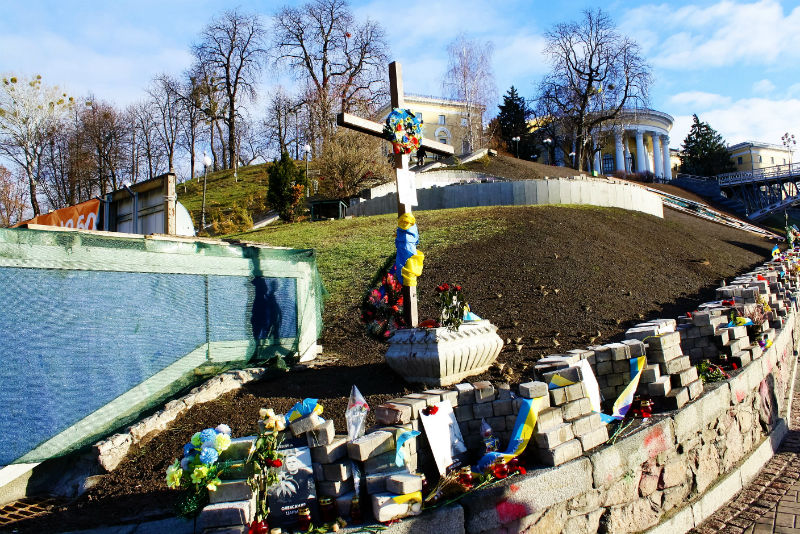 Amongst the remembrance life in the city carries on. The city feels safe, the war is far away.

But the war is still an enduring presence on the streets. On the wall outside one of Kiev’s many Cathedrals have been placed the portraits of all those Ukrainian soldiers killed in the Donbass region since fighting broke out. 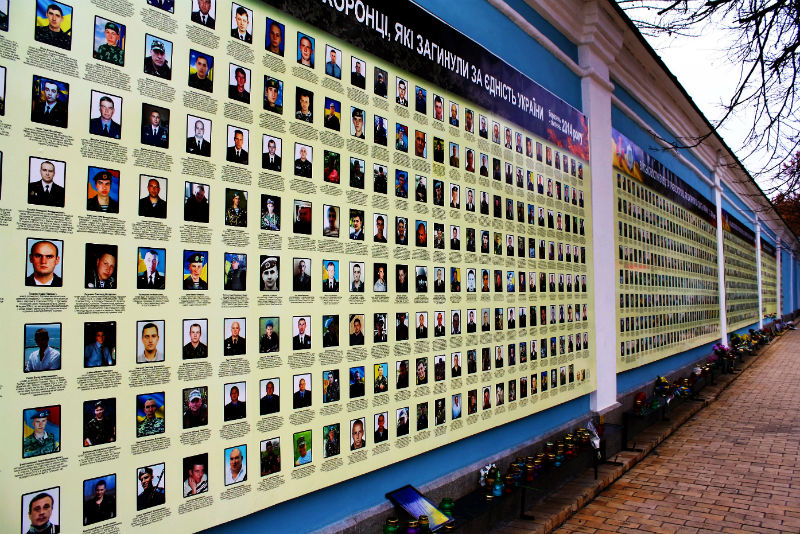 There are lots of portraits.

In The Museum of the Great Patriotic War, a museum originally constructed by the Soviets as a memorial to Ukraine during World War II, there’s a new exhibition amongst the old Nazi and Red Army artefacts, an exhibition to the new war in the East. 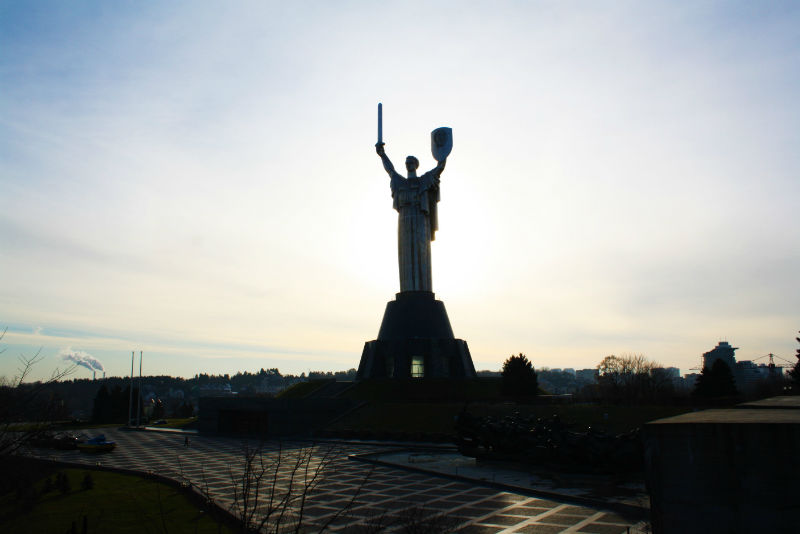 The Museum of the Great Patriotic War

The vivid pictures, uniforms and weapons are fresh from the fighting and a stark reminder that despite the fact that Kiev is safe, and to an extent almost nonchalant even to events on its own borders, there is a war being fought in the villages, the airports and the towns of the distant provinces. 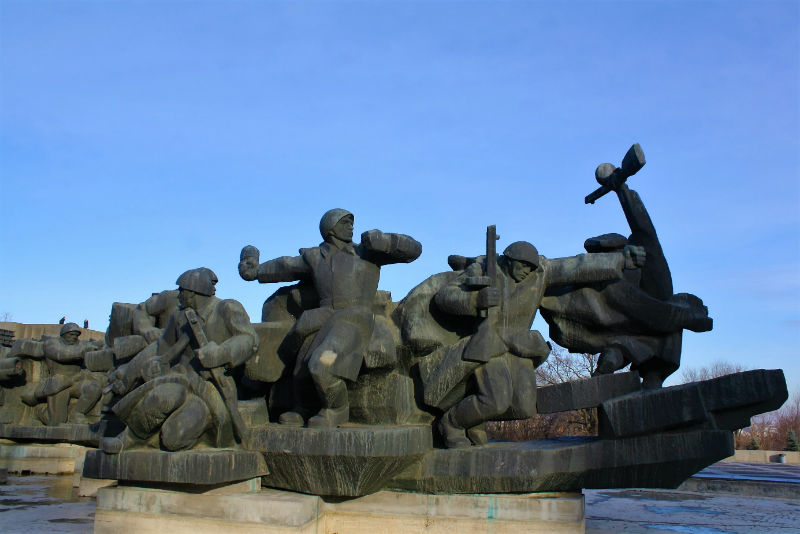 Outside the museum, there are vehicles still bearing the marks of war, that the Ukrainians claim were captured from the separatists but are in fact Russian made and proof of Russia’s shadowy involvement in the troubles. 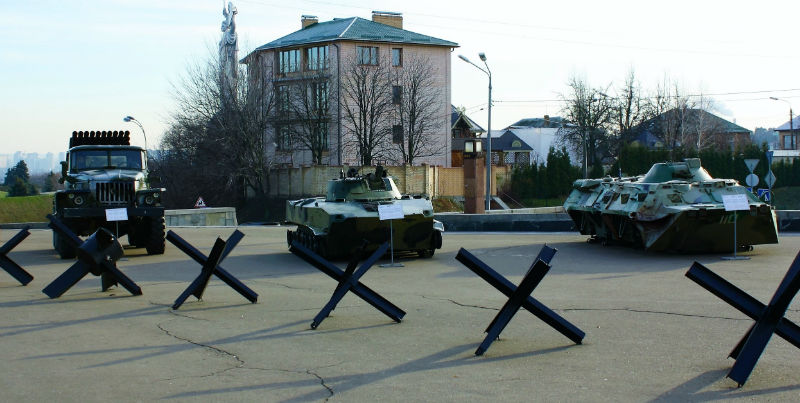 Across the city, the bright blue and yellow of the Ukrainian national colours adorn every building, shop front and monument. Even the bridges were flashing blue and yellow at night.

Nationalism is rife throughout Kiev, and even if it’s not immediately apparent that this is a country at war with itself, it’s apparent that these are definitive times for the nation of Ukraine. 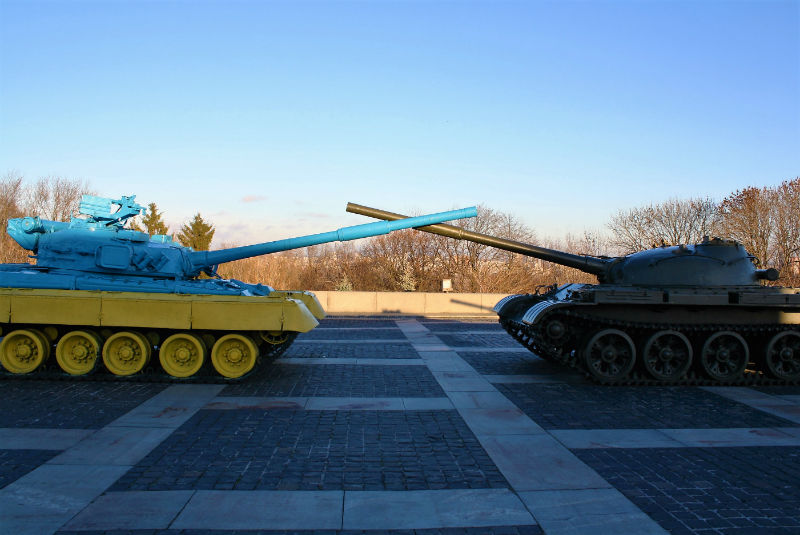 The nights in Kiev are still lively. People hit the bars, the restaurants, the pubs. I met a few students who had been there in Maidan when it all started, and they were proud of their involvement, of their fight for what they saw as their freedom, freedom from Russia, democratic freedom with the European Union, but they were tense, scared that all they had hoped and fought for could be washed away if war continued in the east, and if real change wasn’t realised in the new government in Kiev.

So is Kiev safe to travel to?

Ukraine is a country at war, there’s no denying that, but Kiev and much of Western Ukraine is a world away from danger. The fighting is contained on the Eastern borders, but although life continues in the capital it is a surreal experience for the visitor, to experience both war and peace in Kiev. There are reminders of the war and of the revolution in the streets, Ukraine is undergoing changes the like of which it hasn’t witnessed since the Soviet Union collapsed. Of course, there’s a politically charged climate, and in the world of politics and nationalism you can never really predict what turn events will take next, but keep informed and Kiev is, right now, one of the most interesting cities to visit in Europe. 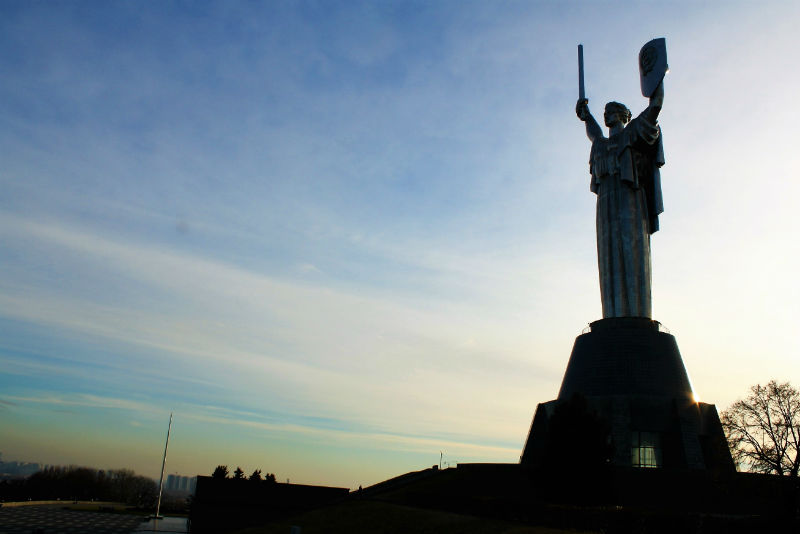 While Kiev is safe, much of the East of Ukraine is undoubtedly and unfortunately NOT safe to visit right now. Watch events closely, but enjoy the city!

Travel Tramp’s Top Things To Do In Kiev

Is Mindanao Safe To Travel To?