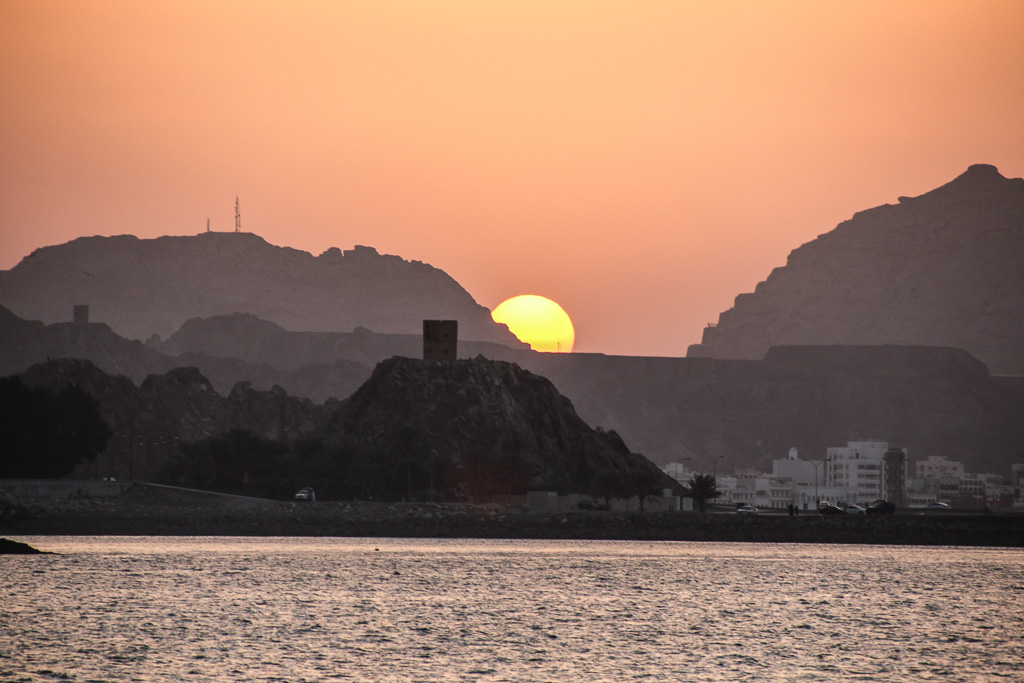 Muscat is the heritage filled capital of Oman, a country that could well be the most underrated in the Middle East!

With a long Corniche that’s perfect rambling, fiery Arabian sunsets and an array of museums, forts and souks to explore, there’s a lot going on in what at first glance is a sleepy, dusty city.

Don’t be fooled, though, because Muscat, Oman is just about as authentic a Middle Eastern city as you can get these days. There’s no glitz and glamour like there is in Dubai, but there are Dhow cruises, mosques and royal palaces.

Keep reading, and discover the top 6 attractions in Muscat Oman.

If you’re heading to Musat, then make a beeline straight to the Muttrah Corniche. This long boulevard stretches along the coastal seafront of the old city centre, a place where you’re instantly immersed in the local history.

Old forts rise from the rocks that guard this ancient harbour, while busy restaurants serve up Middle Eastern staples and the freshest of fresh juices – perfect for rehydrating after a hot walk in the sun.

You’ll spot the Hajar Mountains, the Muttrah Fort and boat after boat on the horizon – it’s a great view! But before you can enjoy the sights of Muscat, you’ll need to make sure you have applied for your Oman e-visa through https://oman-evisa.com. Leave at least 3 business days before you get your entry permit approved, and you can start exploring the capital!

There are lots of great things to do in Muscat, Oman, but you can’t visit the capital without calling into the Sultan Qaboos Grand Mosque.

This grand work of architectural opulence is dedicated to the late Sultan Qaboos, who passed away in 2020. The mosque was years in the making and can hold thousands of worshippers inside its grand, domed halls.

To visit, first check the visitor hours (if you’re not a Muslim worshipping), and ensure that you are dressed appropriately for the occasion. The mosque is always lit up brilliantly at night too, and it certainly stands out on the Muscat skyline.

One of Muscat’s top royal attractions is the Al Alam Palace, which you’ll find in the old city. This was Sultan Qaboos’ ceremonial palace (he spent most of his days elsewhere) but it’s a firm fixture on the heritage sightseeing list.

It’s a colourful building, but of more interest are the flag and changing of the guard ceremonies. The palace itself is over 200 years old, and while you can’t get inside, it’s a great stop when you’re exploring Muttrah!

Looming over the harbour and overlooking Al Alam Palace is the historic Al Mirani Fort. You can’t miss it, and this 16th-century fort stands opposite a second imposing fortress, the Al Jalali Fort.

Both forts were built around the same time, not by the Omanis, but by the Portuguese, who briefly ruled over the city in their efforts to control the lucrative trade routes around the Middle East.

While you’re visiting the cultural sights of the city, save some time to stop off at the Royal Opera House (and if you’re a big culture vulture, book some tickets in advance, too, for a refined operatic evening).

If you can’t get tickets, though, then the building itself is worthy of your efforts. It’s on the same scale of grandeur as the Al Alam Palace and even the Grand Mosque – it’s a really great reflection on the cultural ambitions of the nation.

Okay, so this top natural attraction isn’t actually in the city itself, but 28 kilometres away. It’s well worth the drive, though, because you’ll want a taste of what Oman has to offer outside of the capital before you depart!

Yitti Beach is known for its golden sands (cliche, but true), and the beach is perfectly framed by the mountains that rise abruptly a few km’s inland.

Those are our top 6 Muscat attractions but don’t worry, there’s a lot more to see and even more to do in the city itself. Better yet, combine your trip to the capital with a journey to Nizwa, or south towards Salalah, where you’ll see a whole different side to Oman!