From Jack Kerouac to Paulo Coelho, These Travel Books Will Inspire You To Adventure!

It’s good to take a break from all that travelling, to wind down with a book, and flick through the pages of classics and tales of outrageous adventures or fearless journeys!.

I’ve done a lot of reading and a lot of travelling, so I thought I’d put this little list together to help you pick your next travel read. You’re welcome.

These books will cause wanderlust, they will give you a burning thirst to embark on your own travel exploits.

These travel books will inspire you to adventure!

My current and very assorted travel book collection while I’ve been on the road for months!

On The Road, By Jack Kerouac

I know, I know. What a way to start the list, with a book that probably tops most other lists out there! But this classic from the beat generation author is at the top for personal, as well as literary reasons. On The Road was the book that I first read as a teenager that really inspired me to get out, to want to go somewhere, and do something new. It’s got a mesmerising power that really draws you in, as you follow Kerouac’s insane trips across America, until it throws you out again looking for your own mad and outrageous adventures in the world.

The Alchemist, By Paulo Coelho

This is pure motivation. Not just in terms of travel, but for anyone in any walk of life that’s hit a slump and needs not just picking up, but hurling back out into the world. It’s a simple, simple tale of a shepherd boy who’s trying to find his own Personal Legend, his own way in life. He travels across Spain and North Africa, he’s put down, he fails, but he always gets up again and finds a way to realise his dream. Sounds cheesy, but once you’ve read it you won’t see life in the same way again. 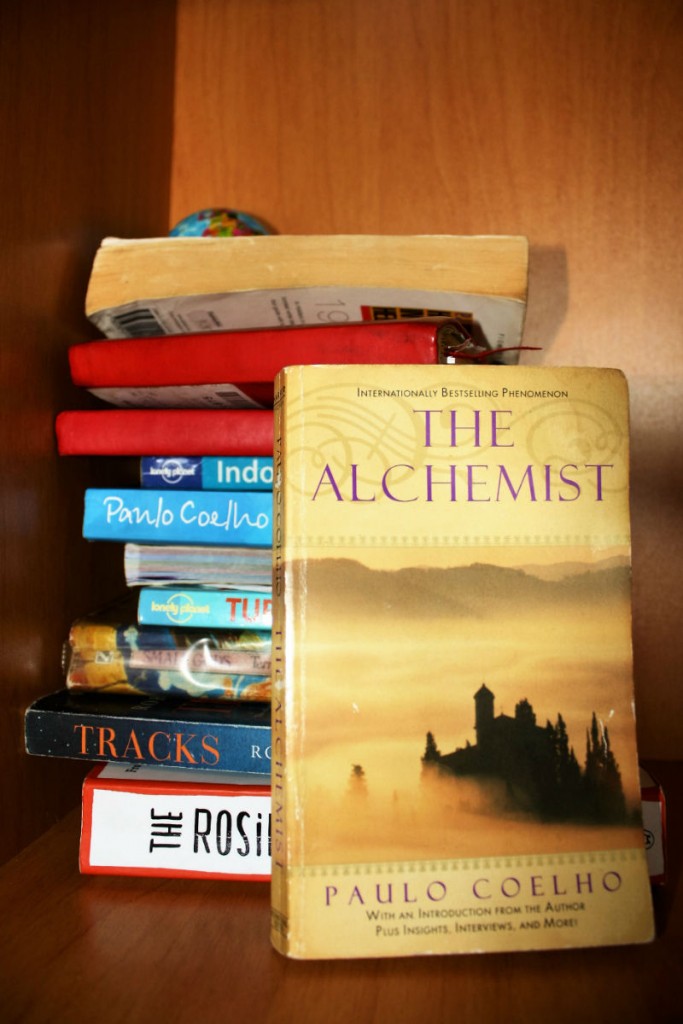 The Hundred Year Old Man Who Climbed Out The Window And Disappeared, By Jonas Jonasson

This comic novel speaks to anyone who fears old age. You’re never too old for an adventure. Mr Karlsson, the hundred year old man, breaks out of his retirement home and gets nonchalantly embroiled with the criminal underworld and police. At the same time he looks back over his last hundred years, where he was always a side character, but usually the subtle cause of the biggest events in history. The past of this quiet old man is slowly revealed, as he travelled the world, not always intentionally, meeting the likes of Stalin, Mao and Truman along the way. And he always manages to blow something or someone up.

In The Footsteps of Genghis Khan, By Tim Cope

This is a real, gritty adventure tale. It follows the authors exploits as he attempts, rather heroically, romantically or perhaps foolishly, to follow in the foot steps of Genghis Khan and the nomadic tribes of Central Asia. An inexperienced horseman, he travels to Mongolia, purchases horses and then attempts to cross the old nomad trails to Europe. It’s a truly epic feat of mental and physical endurance, and it really shows that there are still incredible journeys left to be made in the world!

The Man Who Cycled The World, By Mark Beaumont

Mr Beaumont is an endurance athlete, best known for his cycling challenges and records attempts. He is also the man who cycled the world. He set out to smash the world record for the fastest circumnavigation of the globe by bicycle, and his book tells you just how he did that. But more than just a cycling book, it’s an enduring record of the places he pedalled through, the people he met and who helped him along the way to achieve his dream, and to break the record. His route took him through, Europe, Turkey, Iran, Pakistan, India, South East Asia, across the entirety of Australia and the width of the United States. It will inspire you to get outside and start making or breaking your own records.

This classic of travel literature is the work of Wilfred Thesiger, a British diplomat, writer and explorer who in the 1950’s journeyed through the Empty Quarter and across the deserts and dunes of the Arabian Peninsular. He makes incredible, long distance trip with local Arabs, but the book is more a narrative of the lives and traditions of these tribes than about himself. It’s possibly even more intriguing a read now, as he passes through and writes about the small, poor villages- Abu Dhabi for one- of the deserts, which have now become the opulent, rich metropolises we know. It is a glimpse into travel history itself.

The really incredible thing about Shantaram, is the fact that it’s ‘supposedly‘ based on real events. This is the novelised, slightly fictionalised story of the author’s life in Bombay in the 1980s. After escaping from an Australian jail, he flees his home country to the slums of India, where he becomes embroiled in the seedy underworld, and comes to embrace his new life. The book delves deep into Indian slum life, and further afield, as he even becomes part of the Mujahadeen War in Afghanistan. Maybe some of it is too crazy to be true, but it’s certainly a mad travelogue to read.

This is not your average piece of travel literature. That’s because Mr O’Rourke isn’t your average travel writer. His stories are from the danger zone. He travels to war zones, politically unstable countries and no go nations that most people stay clear of. His book is a collection of his holidays in hell, essays and articles he published, mainly through the 80’s and 90’s. His satire is brilliant, he usually ends up drunk and he might just convince you to take a holiday in hell too. 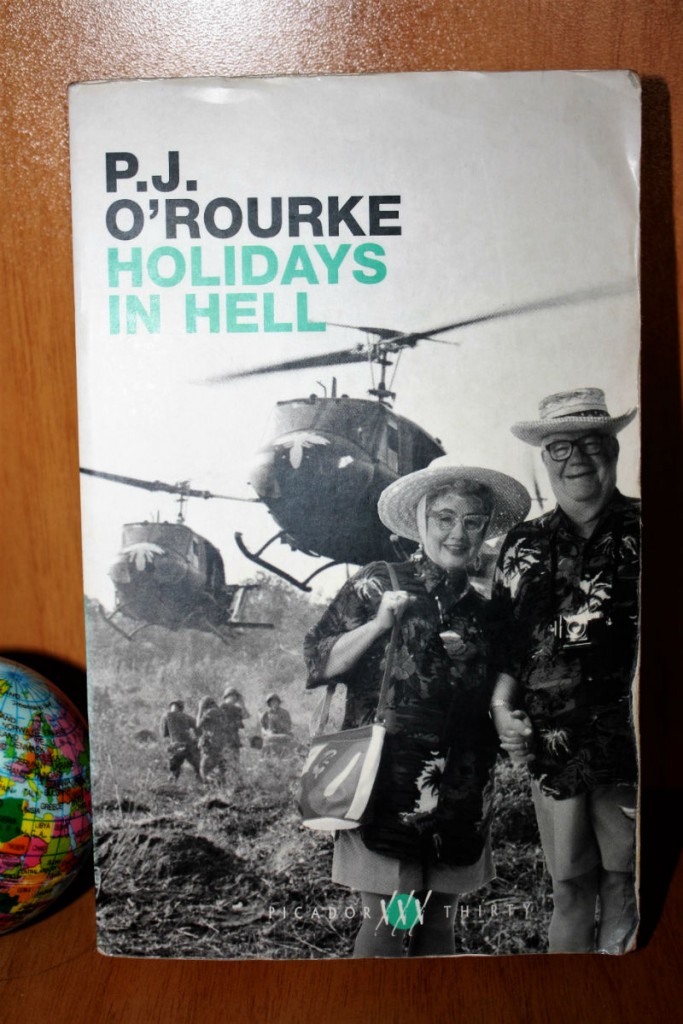 This was Orwell’s first novel. A tribute written in the dieing days of the British Empire, and based loosely on his own experiences in the colonial administration of Burma. The story follows John Flory, and delves deep into colonial society, as it reveals the disillusionment felt by the main character and the harsh treatment of the locals. At the same time it transports you the beautiful country that is Burma, and is a must read for anyone travelling here who wants to try to understand the nation’s colonial history and current problems.

Anything By Ernest Hemingway!

Any of Hemingway’s work will inspire you to adventure, or to something bigger than yourself. Just look at his novels from World War I, such as A Farewell To Arms, or the Spanish Civil War- For Whom The Bell Tolls comes to mind- he was a writer who immersed himself in conflict and ideals. He didn’t just write, but he lived. His love of bullfighting might be seen as outdated now, but his books on the Spanish fiestas will instantly give you the urge to drink sangria in Spain. Hemingway single handed threw the bull running of Pamplona-check out The Sun Also Rises- into the international spotlight, and how many bucket lists is the festival on now?

Think I missed something of literary importance? Then comment below!

Don’t know how to read? Then check out these travel films instead!