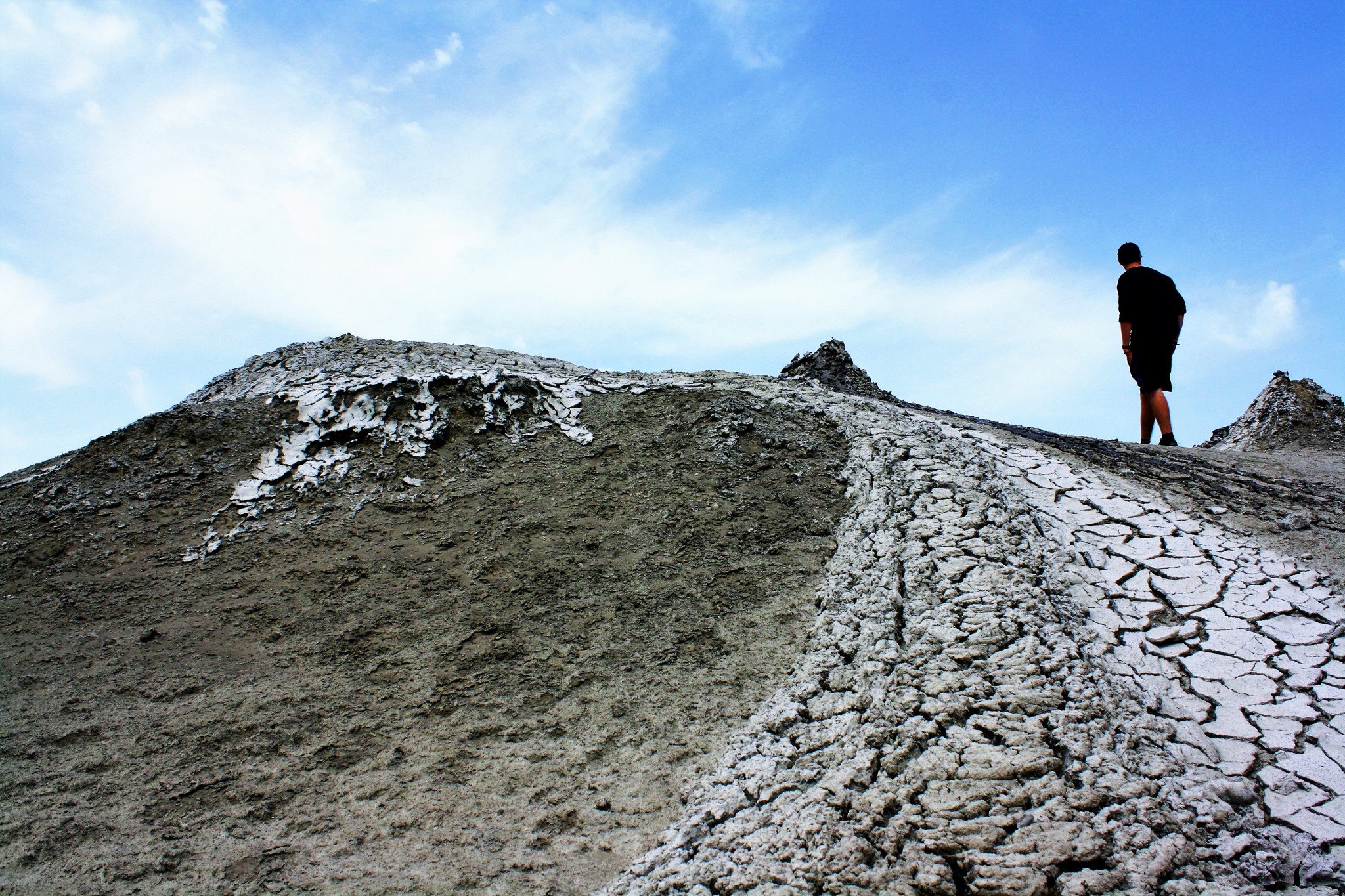 The strange mud volcanoes of Azerbaijan are a bizarre natural phenomenon in the desert near Baku.

Azerbaijan styles itself as the land of fire. It’s a resource rich country, where oil literally seeps out of the ground and occasionally just doesn’t stop burning. A lesser known side effect of the huge stores of natural resources, has been the strange occurrence of rare mud volcanoes.

I went to find them in the desert near Baku. 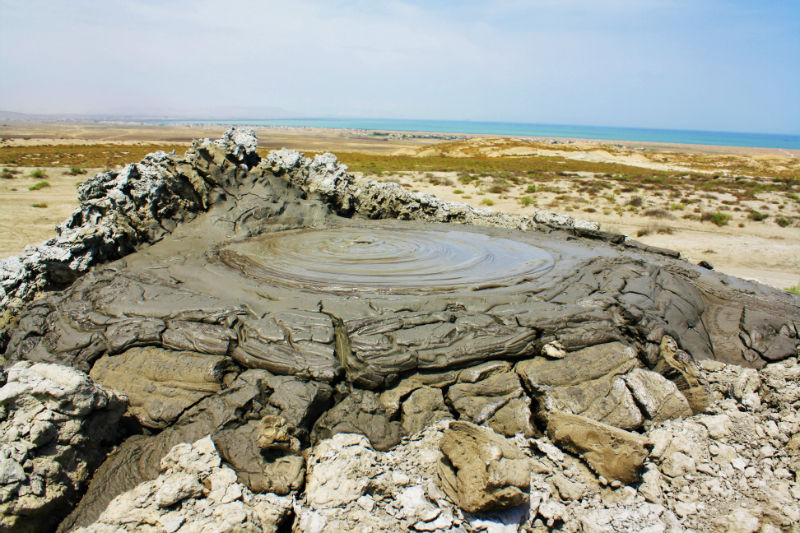 This sort of volcano just isn’t normal. Azerbaijan can claim to be the site of almost half of the world’s mud volcanoes, with estimates putting that figure of 50 percent still at a lowly 400 or so. These are concentrated around the mineral rich coastline of the Caspian Sea, an arid desert like place, only accessible by a driver whose willing to get his car muddy. 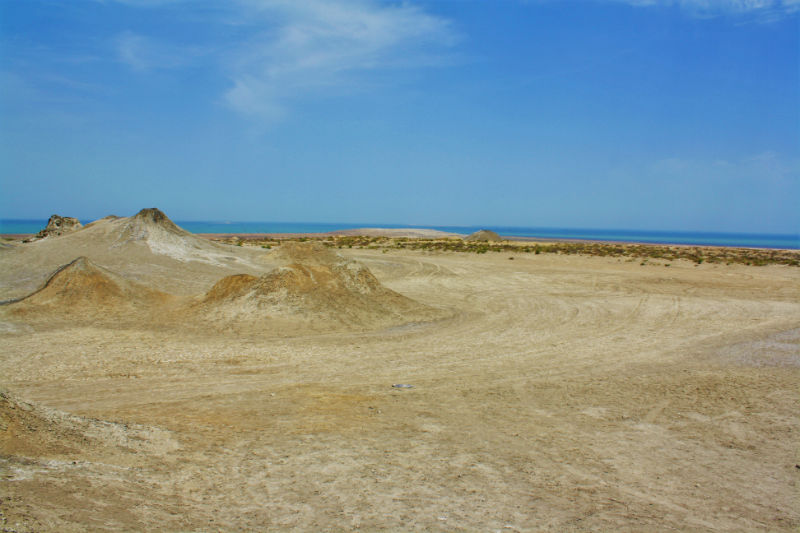 I was visiting Gobustan National Park not far from the Azerbaijani capital of Baku, and a place where the mud volcanoes can be walked right up to and where the brave can even bathe in them. 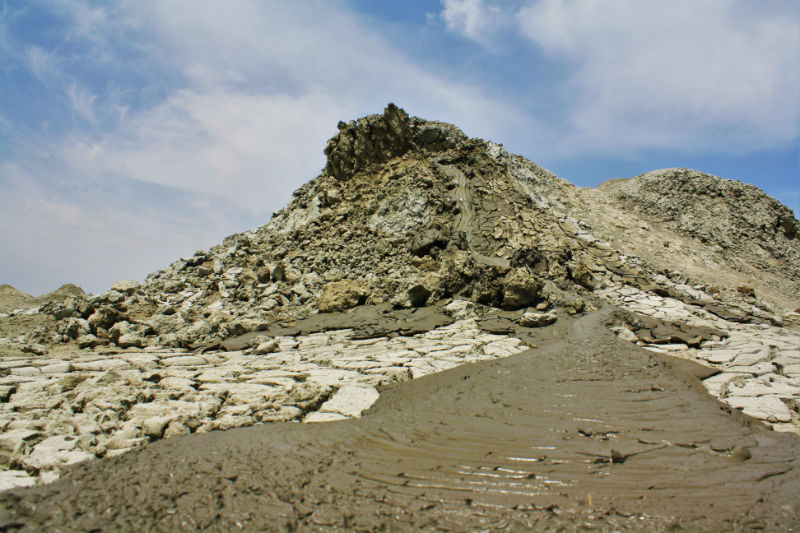 The rumoured healing qualities of the mud are the stuff of local legend, and it’s not uncommon to see people strip off and completely immerse themselves in the grey, muddy slime as it oozes straight out of the earth. My travel companion gave herself a face mask and even took a few bottles back to Baku to experiment with the therapeutic qualities. She hasn’t died yet, so it must be good. 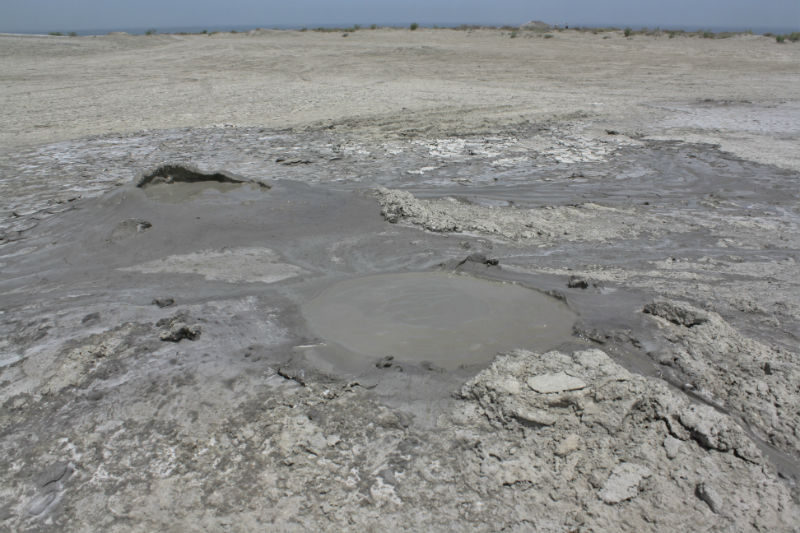 The drive down from Baku was along the coastal highway, past oil rigs and petro checmical plants. As the desert got dustier, the driver veered off the road and onto a rough track leading inland. Here the true nature of the Land of Fire was evident, as I saw oil simply pooling out of the ground. 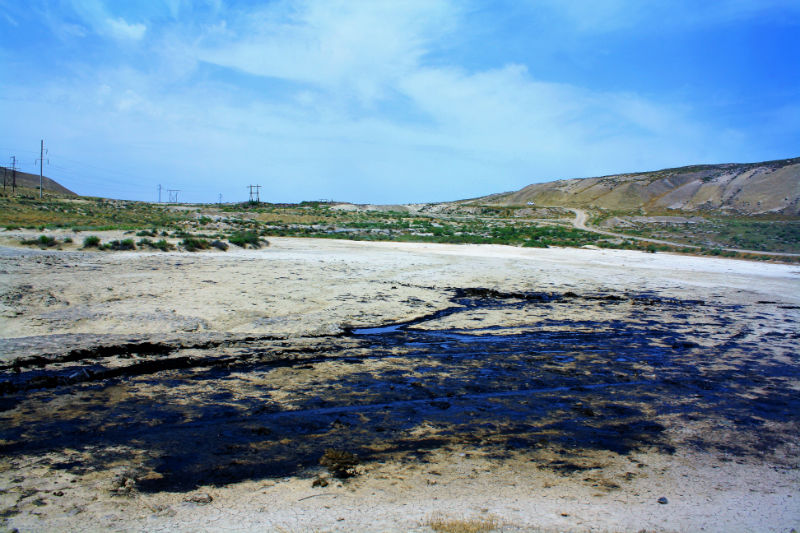 The rough ride continued, until we stopped on a plateau covered in mysterious conical shapes. These were the mud volcanoes. 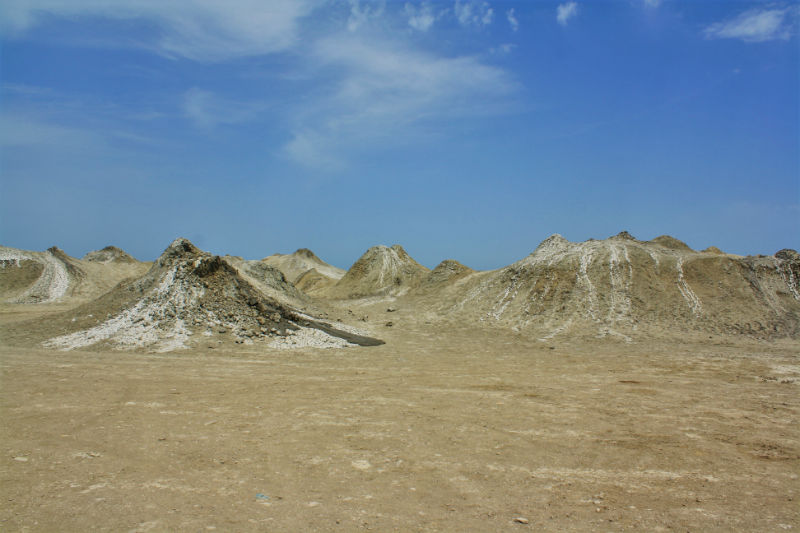 These were not the mighty, crater like monsters of mud I’d imagined. No, these were smaller, but numerous and busting with activity and copious quantities of mud. Large ones do exist, some are kilometres wide and hundreds of metres tall .The largest at Gobustan are only a few metres high, but these I could walk amongst and be both confused and enthralled by. 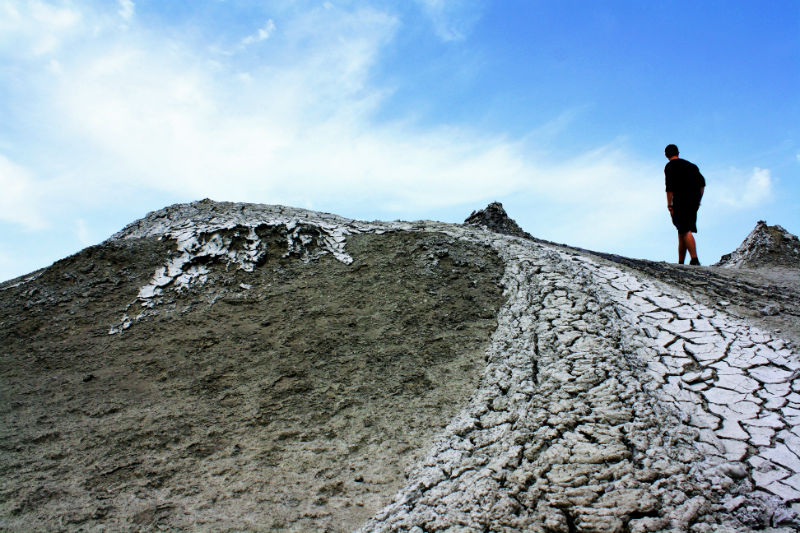 The volcanoes gurgle out mud at intermittent intervals, sometimes just a bit of sludge, other times a rumbling belch. Occasionally- we’re talking every few decades here- huge eruptions occur which spurt mud, gas and flames metres into the air, but these are both rare and dangerous. 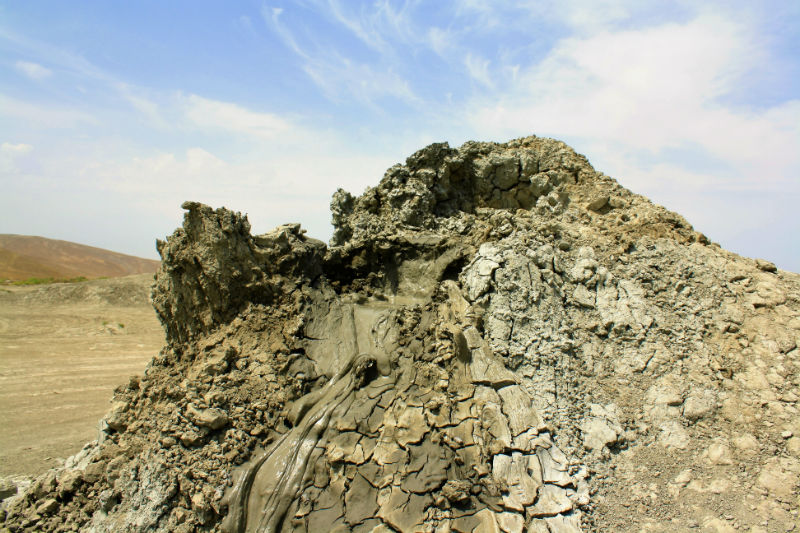 The dry heat leaves dry mud trails caked along the floor, in strange oozing patterns across the dusty ground. 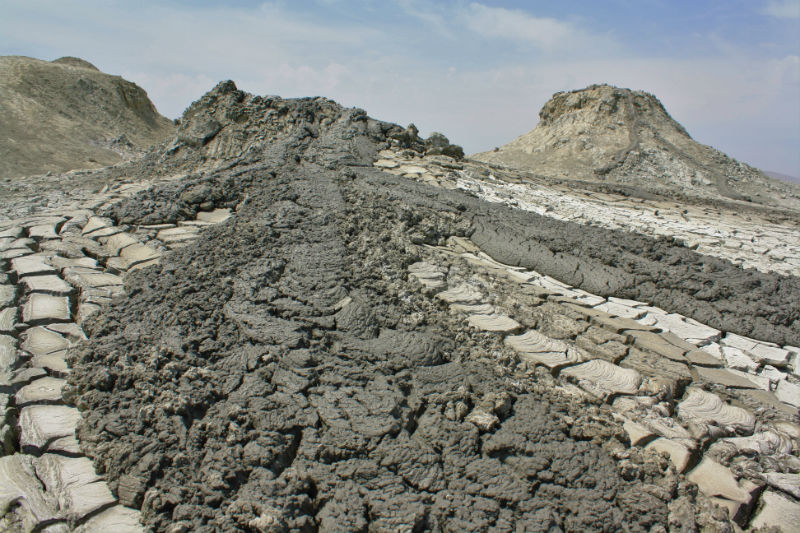 The mud, despite looking like it’s bursting forth from the fiery insides of the earth itself, is relatively cold. The sediment is collected by tectonic movements and pressures, and sits just below the surface waiting to explode outwards. I’m not a scientist, but presumably it’s shallow enough to cool down before being forced outwards. 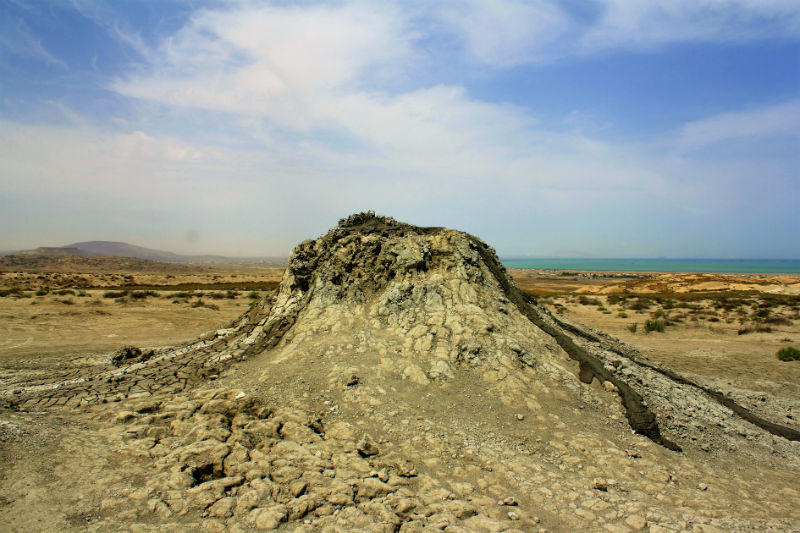 But the volcanoes also hide high levels of natural gasses and hydrocarbons and when the pressure gets too much, huge gaseous ignitions can occur. Then itt’s far from cold as flames shoot high into the sky. 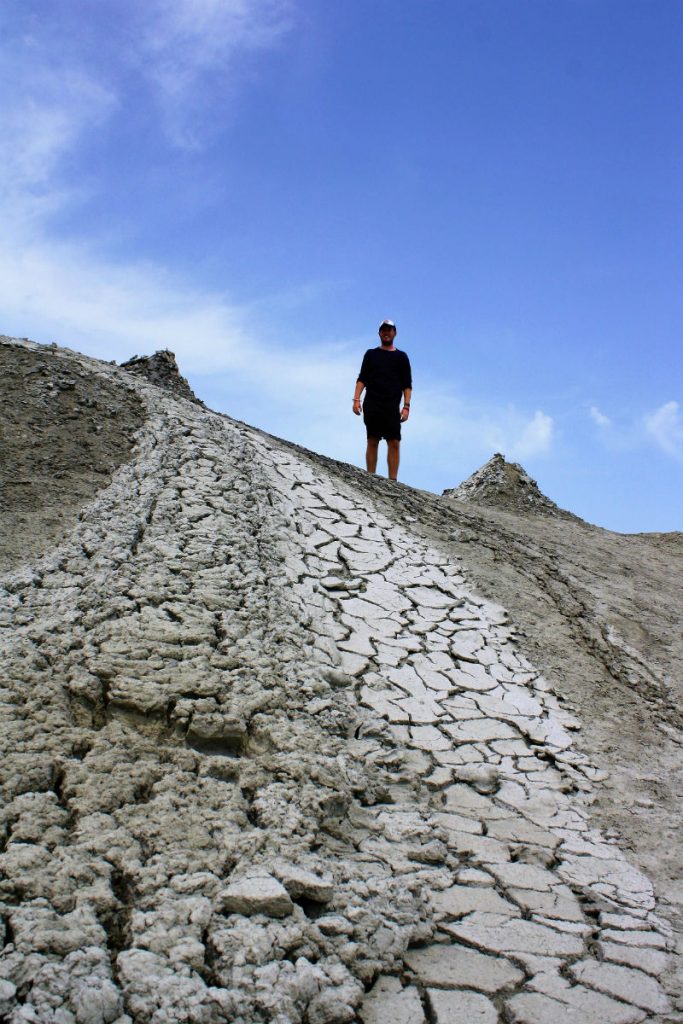 I saw no such insane explosions, but I did get to cover myself in mud and stand atop a volcano in the Azerbaijani desert.

How Do I Travel To The Mud Volcanoes of Azerbaijan?

Gobustan National Park is not easily accessible by public transport. Busses heading along the coastal road towards Alat will be able to drop you by the entrance but good luck finding the mud volcanoes. They are a long hike along rough roads and that’s if you can find your way. The best option is to higher a driver for the day from Baku, but make sure they know exactly where they are going. You can combine it with a trip to other places within Gobustan, such as the nearby Petroglyphs! You can do this for around 50 Manat a car if you haggle hard.