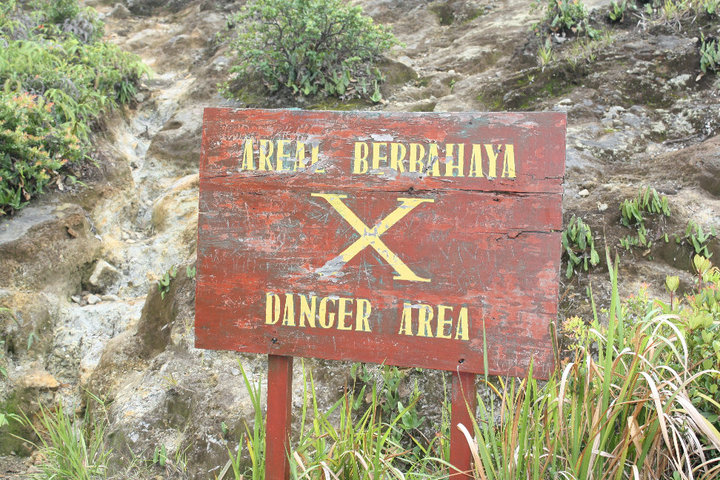 Volcanoes are strewn across the seismic landscape of the Indonesian Islands, and the island of Flores in East Nusa Tengarra Province is no exception.

I ventured across this mountainous land to find the coloured lakes of Mount Kelimutu, the desolate remains of the recently erupted Wawo Muda  and to stand on the edge of volcanic craters. 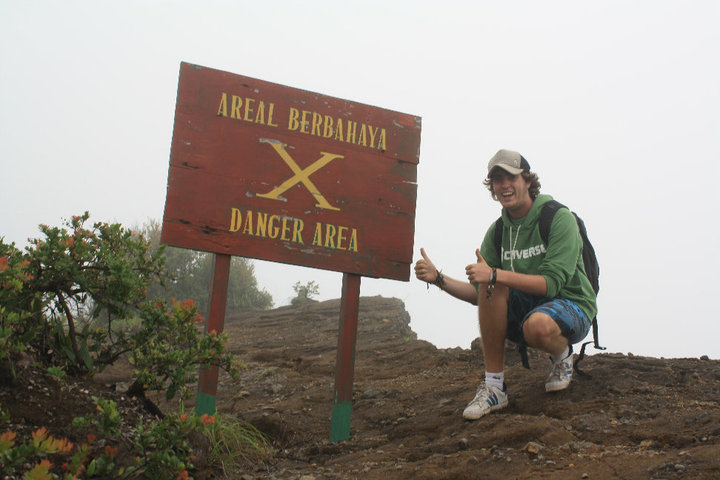 That’s me standing on the edge of a crater. That’s right, in the DANGER ZONE.

Setting out across the island of Flores, to the Eastern reaches of Indonesia, I was in search of Mount Kelimutu, a mysterious 3 crater volcano, where each lake within the crater is said to be able to change its colour. 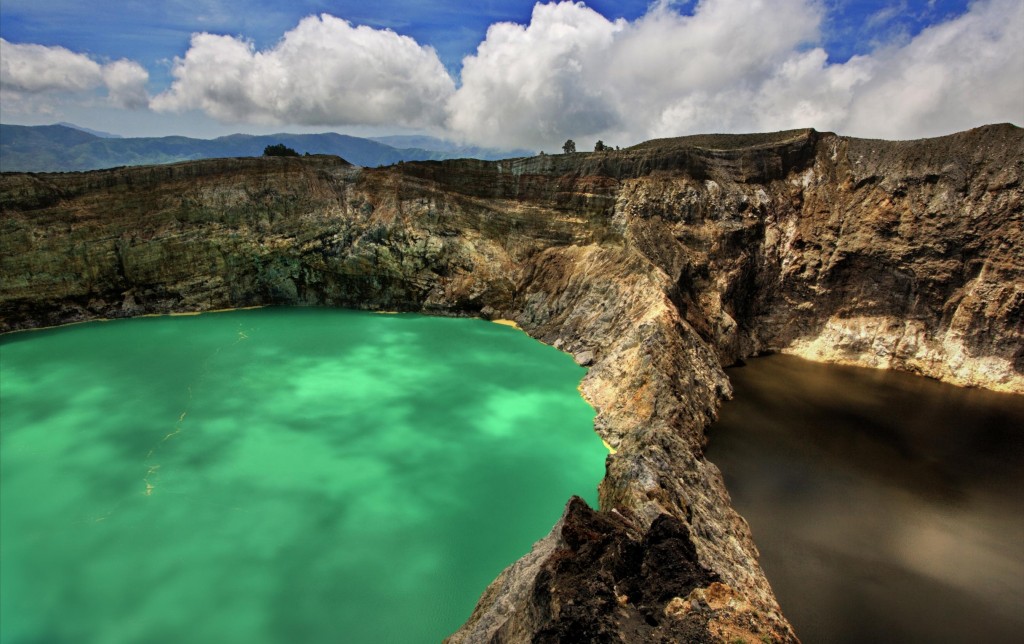 “Kelimutu 2008-08-08” by Neil, WWW.NEILSRTW.BLOGSPOT.COM    [If you keep reading you’ll see why I had to source a picture perfect  image of Mount Kelimutu for you]

I had a long journey ahead of me to find the mythical Kelimutu lakes though. Leaving Komodo National Park behind, where I’d just come face to face with the beastly Komodo Dragon, I had miles of untamed roads to cover on raw bus rides before I would reach the volcano. 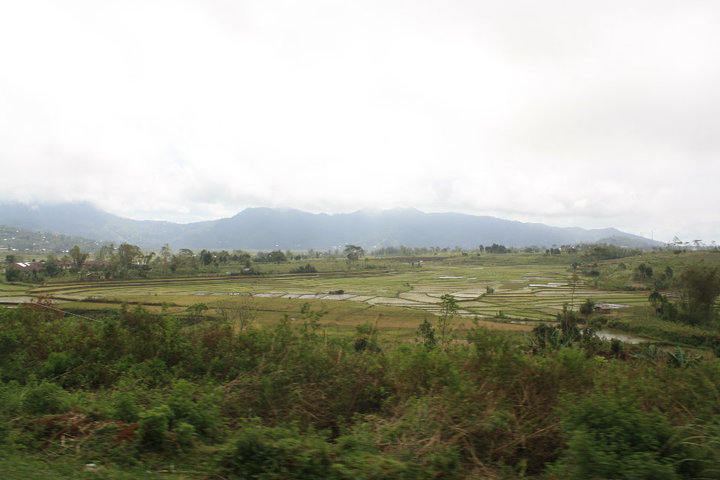 Breaking up the cross-island drive at a town in the hills, Bajawa, I heard rumours of another craterous volcano, again with beautiful, coloured lakes which shimmer majestically in the sunlight.

The talk was of a volcano called Wawo Muda. Digging deeper, I discovered that this Wawo Muda was formed very recently, after an eruption in 2001. The eruption violently forced the creation of several craters, which then filled with water. Chemicals and bacteria then mixed with the water to create colourful lakes. 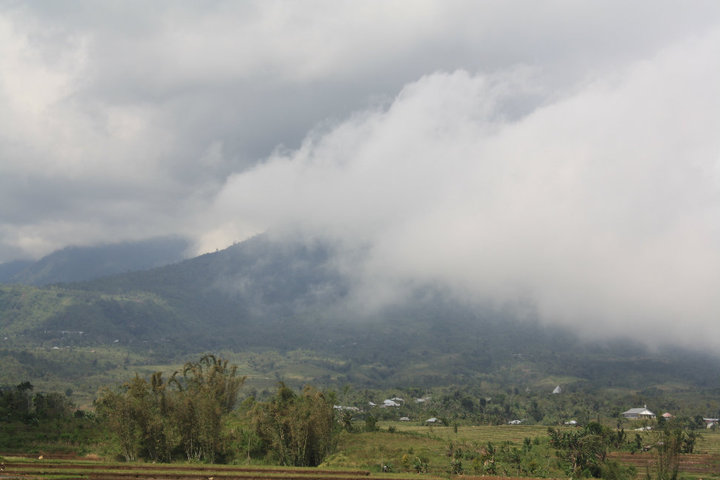 Trekking out from Bajawa, a motorcycle driver dropped me at the bottom of a dirt track leading up a hill, and the long trudge upwards into the clouds began. 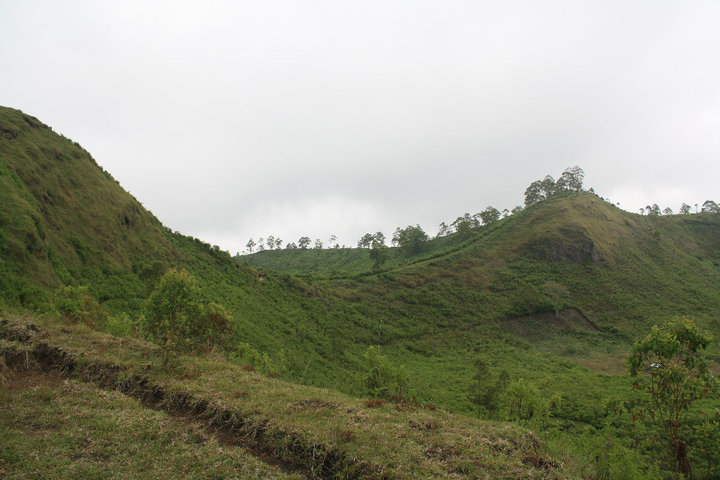 Emerging onto a ridge line at the top of the hill, not a soul was in sight. But where were these glistening lakes I’d been told about? 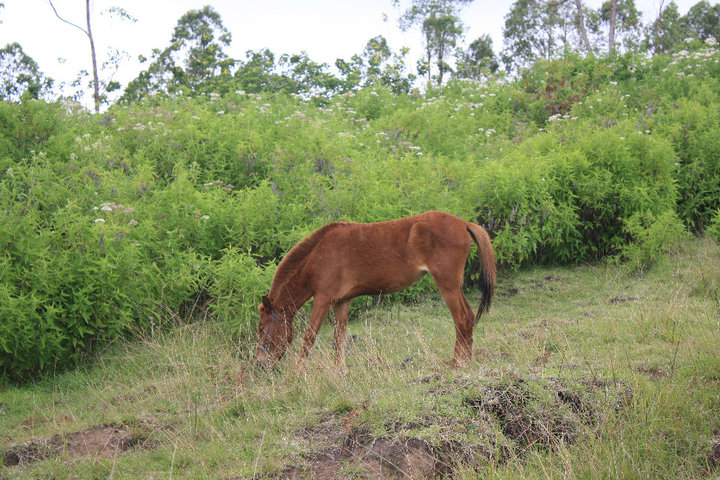 A wild horse was roaming around, but it wouldn’t show me the way. 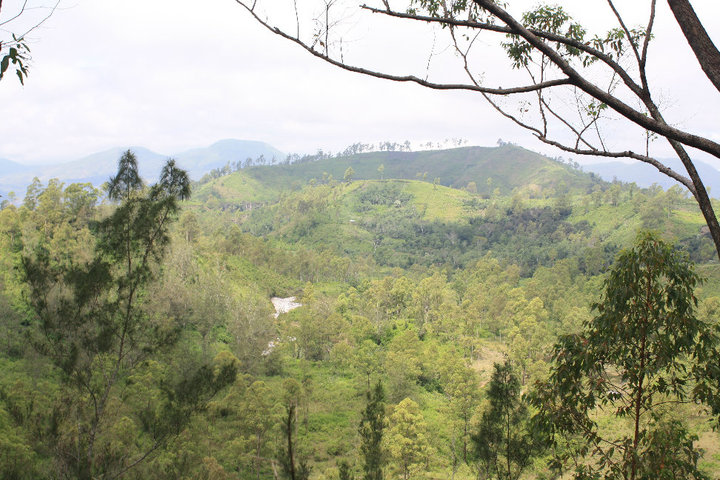 Walking along the ridge for some time, it belatedly dawned on me when I saw the opposing ridge line in the distance that I was probably, in fact, already on the edge of a volcano. 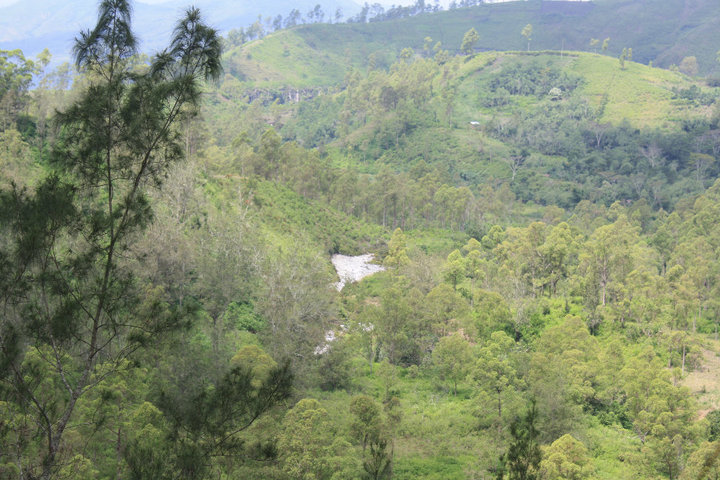 Emerging through the dense foliage, the landscape below suddenly emptied itself of wildlife of greenery, leaving only a grey, rocky void. 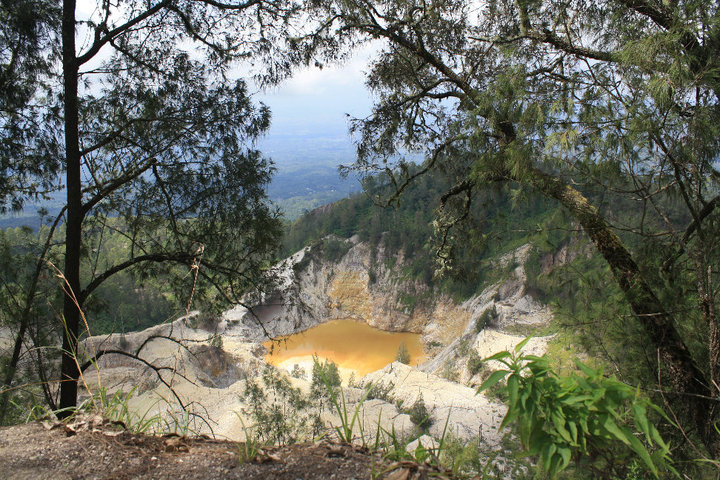 This barren crater was filled with murky, orange water. 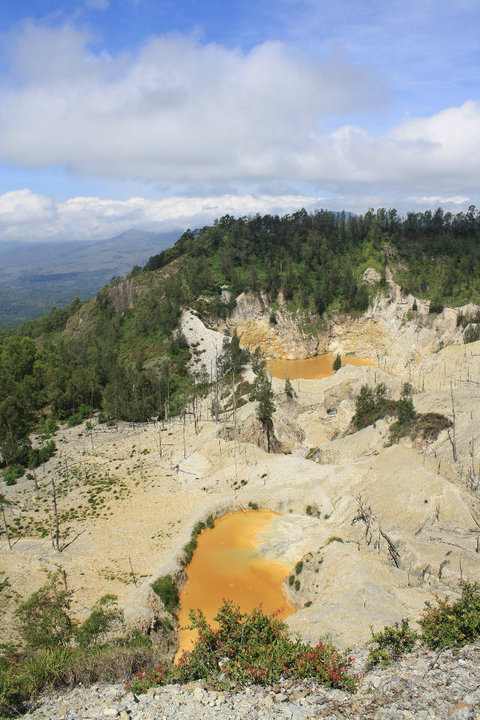 And there was a second, smaller crater beneath me as I walked out onto the rocky outcrop to survey the scene.

I was standing on the edge of my first volcano, Wawo Muda. The lakes certainly weren’t shimmering as beautifully as I’d been led to believe, in fact with it being the dry season, they were, well…quite dry actually. And not really doing an awful lot of shimmering. 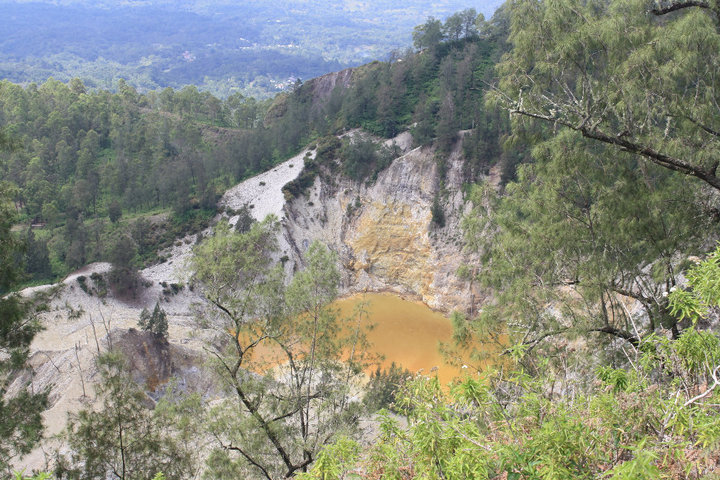 But still, there was something profoundly humbling to be found in the desolate view. No trees grew near the edge, and the eruption in 2001 would have strewn the pines for miles, and blasted rock across the hillside.

In many ways it did bear some resemblance to a disused quarry though.

Not content with the one volcano, it was time to get back on the road and find Mount Kelimutu. It would prove to be a much grander version of Wawo Muda. 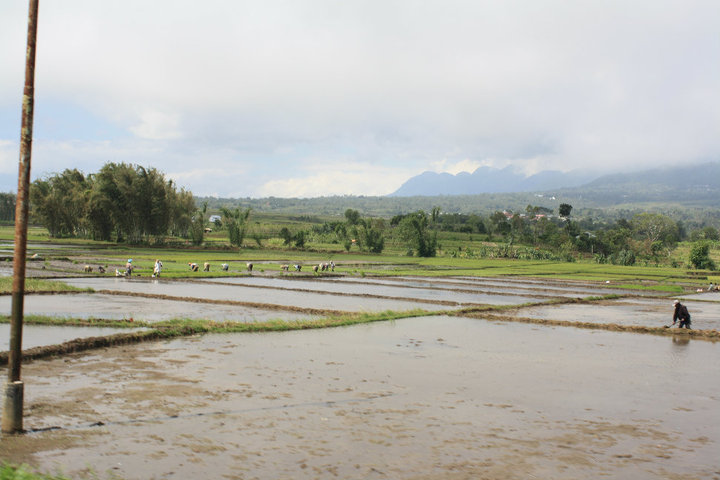 From Bajawa I travelled further East, through what is a very rural and predominantly agricultural part of Indonesia. 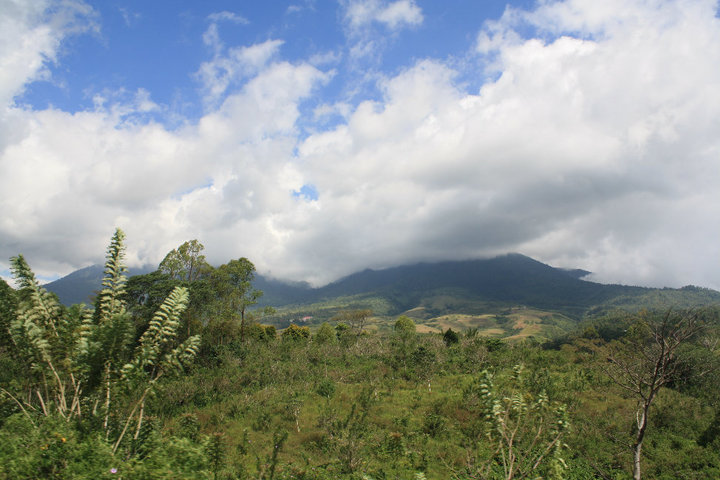 Mountains, fields and farmers slowly rolled by as a rickety old bus took me to the base of Mount Kelimutu, and dropped me at the small village of Moni. 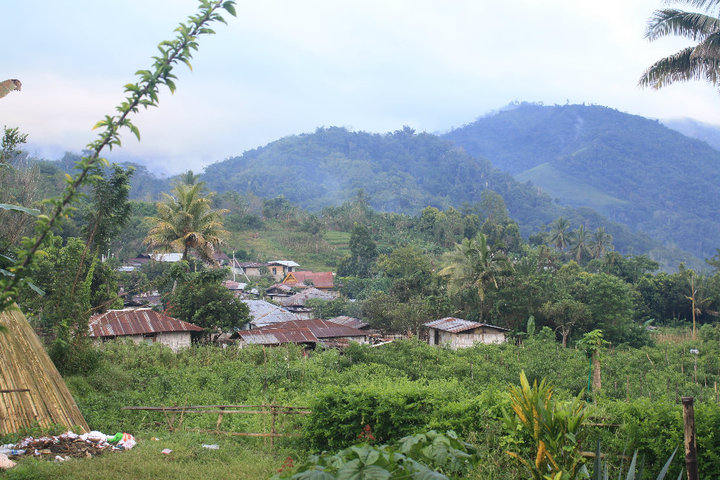 I was told by my guesthouse owner that it would be best to venture up the volcano to catch the sun rise, so in the early hours of the morning I rose, and in darkness a motorcyclist gave me a lift up winding roads to the entrance of Kelimutu National Park.

I made my way through the cold, blackness that surrounded the top of the mountain, following a guide carefully, in fear that one wrong move would see me slip off the edge of a crater. Falling into a volcano wasn’t exactly part of my planned agenda.

And then I waited as the darkness slowly ascended, and the craters became visible. Well, kind of visible. 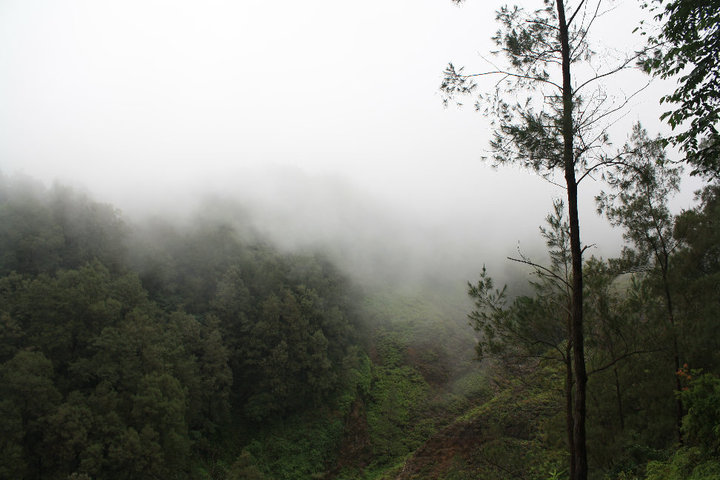 The sun didn’t exactly rise, things got lighter, and all I could really see was a lot of cloud cover.

Warning signs appeared out of the fog, but to see anything, I would have to get closer to the edge of the volcano. 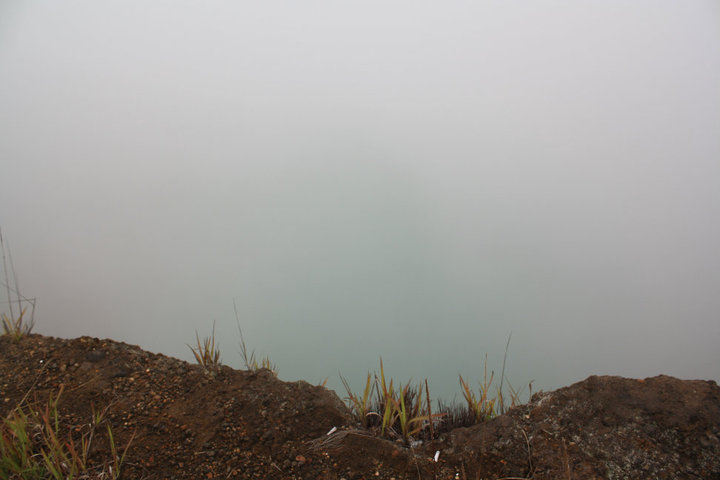 Even when teetering over the edge, the visibility was what one would call low. 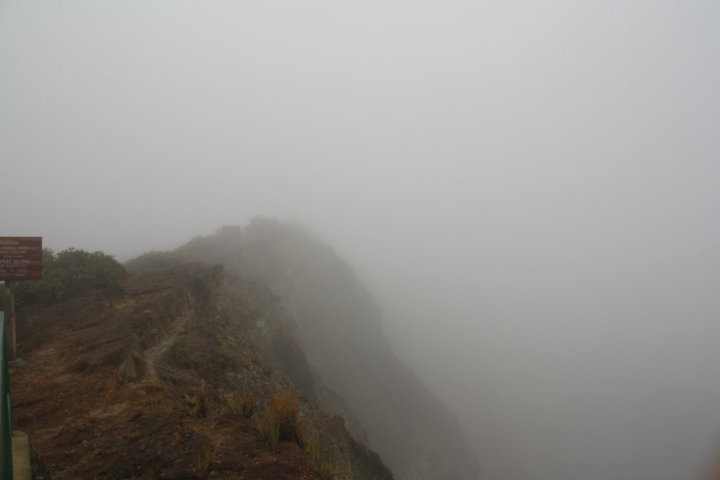 The weather was always going to be a gamble, but this was bloody ridiculous! 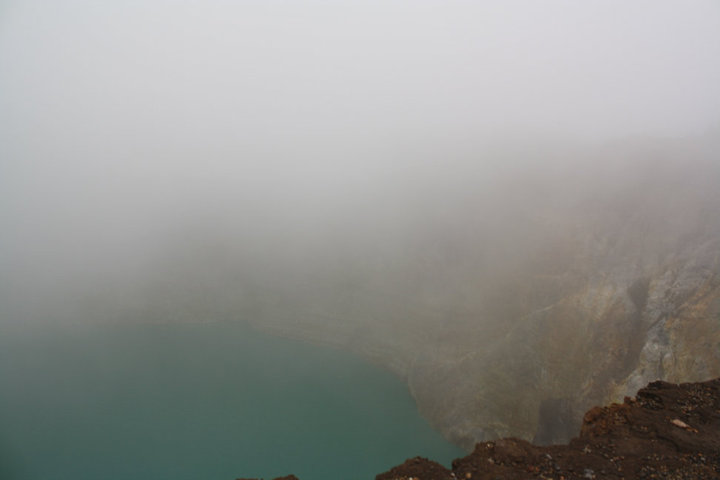 Just before giving up all hope of actually seeing one of the fabled coloured lakes of Kelimutu, the cloud lifted slightly, and I glimpsed the vivid turquoise of one of the crater’s lakes through the white of the fog. 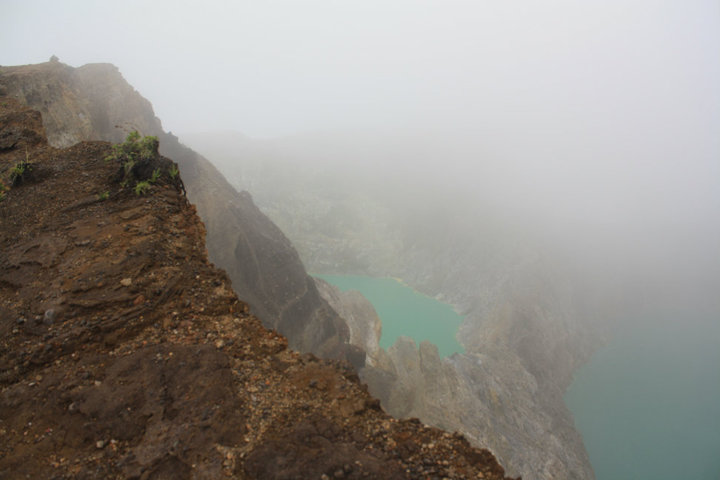 Leaning further over the edge, I could see a second lake. The third lake is detached completely from these two, and usually black in colour, but the cloud completely covered the crater. The lakes I could see where liable to change their own turquoise colour due to volcanic activity, and differing chemical compositions. Less scientific legends reckon that the lakes change colour to reflect important events that occur in Indonesia, such as a new President coming to power. 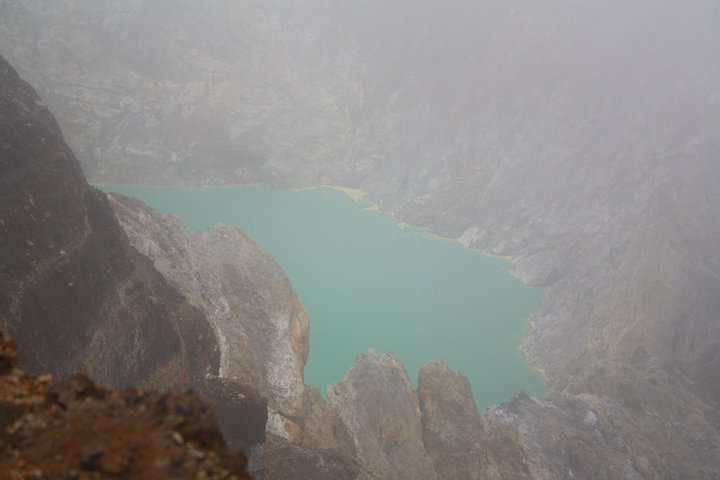 Individually, the lakes I could see were, for lack of a less pretentious word, ethereal. If the visibility had been better, the sight of all three lakes would have been magnificent.

With the cloud unlikely to rise anymore, I headed back down the mountain. 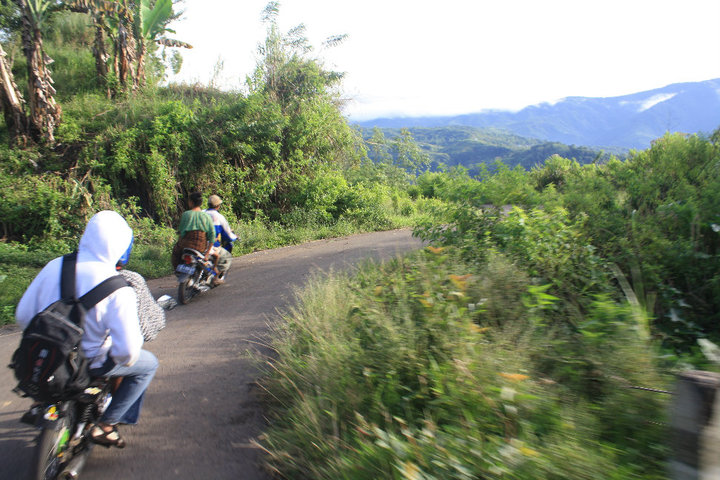 And in the daylight I saw all I’d missed during my dark ascent. 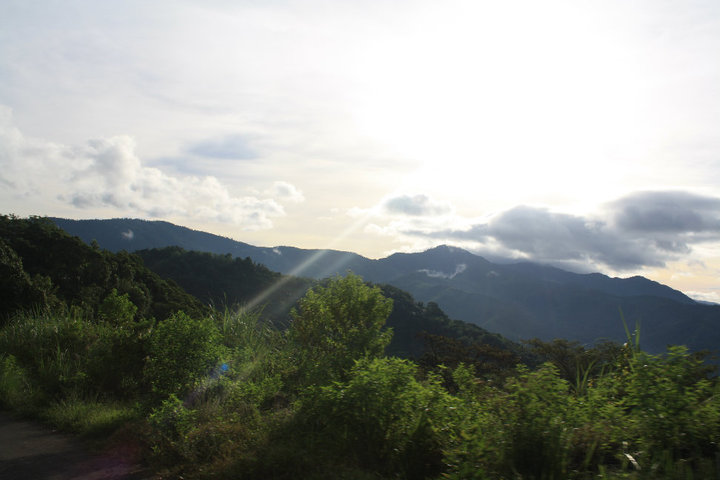 Even if the multi coloured volcano lakes were shrouded in cloud, Kelimutu National Park has a lot to offer the adventurer. 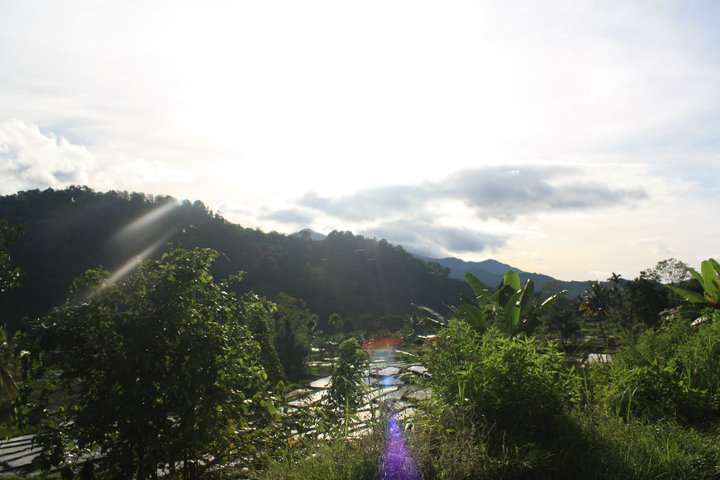 As they say, to travel is to live. 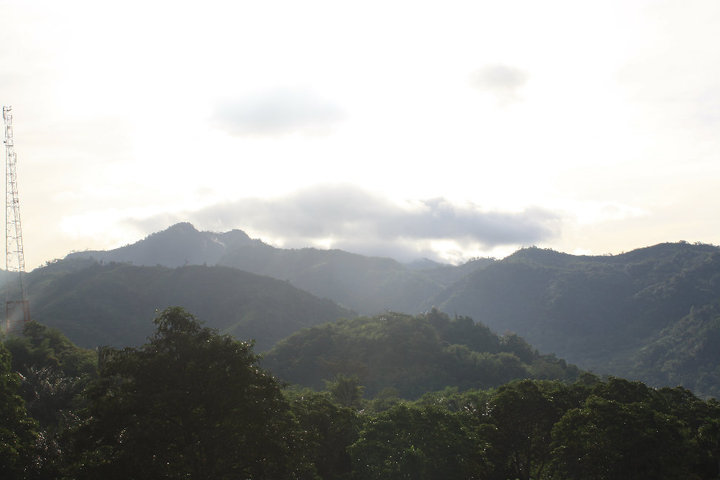 What better way to live than on the crater’s edge?

There’s not a huge amount of info available on Mount Kelimutu and even less on Wawo Muda, but if you feel compelled to visit, a good starting point, of course, is Trip Advisor. The Anysomewhere Blog has great advice specifically on Wawo Muda as well.