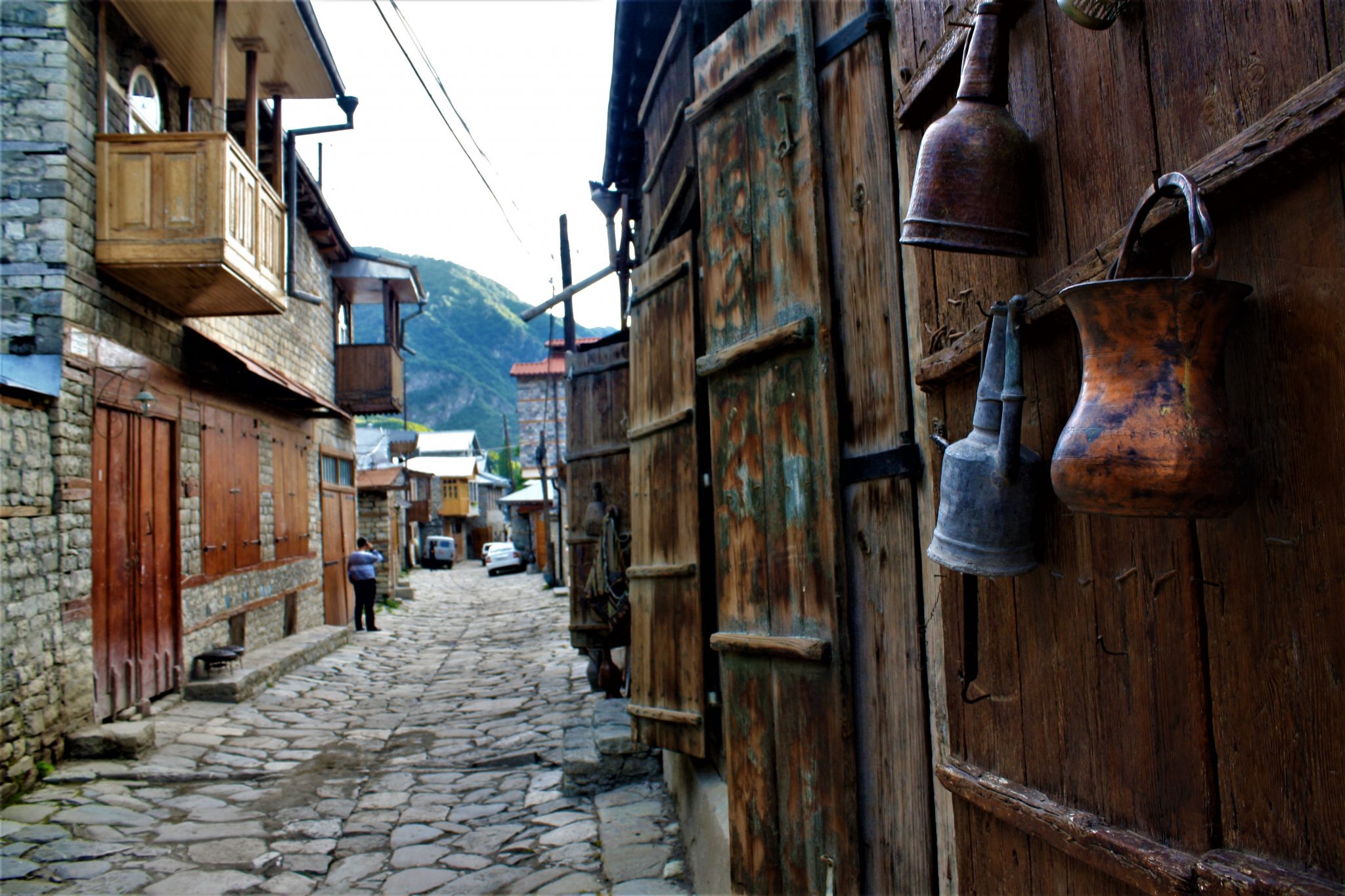 The Sheep Had Completely Blocked the Road To Lahic.

There was no way around them. On one side were steep, jagged cliffs that terrifyingly looked as if they would come violently crashing down upon us at any moment and on the other side was a precipitous drop which fell hundreds of metres into the rocky gorge below.

And all around us, were sheep.

This was the road to Lahic, an isolated mountain village in central Azerbaijan.

The only road to Lahic.

I’d travelled from Baku, the capital of Azerbaijan, to the small town of Ismailli, a four hour bus ride which I wiled away watching the desert like lands that surround the Caspian shoreline transform into green and fertile hills and mountains. 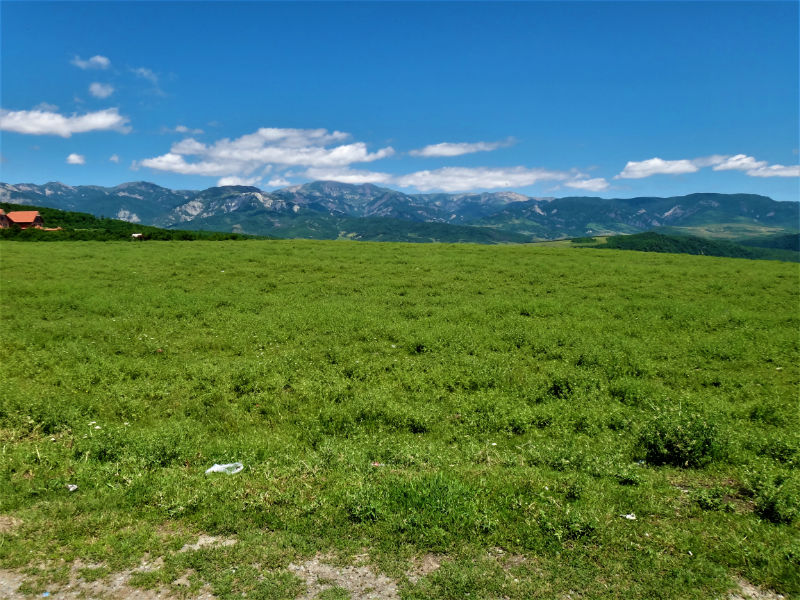 In Ismailli I’d hung around for an hour gorging on Azerbaijani delicacies at the local kebab shop while I waited for the minibus to depart for Lahic. When it was full- I mean really full- the Marshrutka began the journey into the mountains. 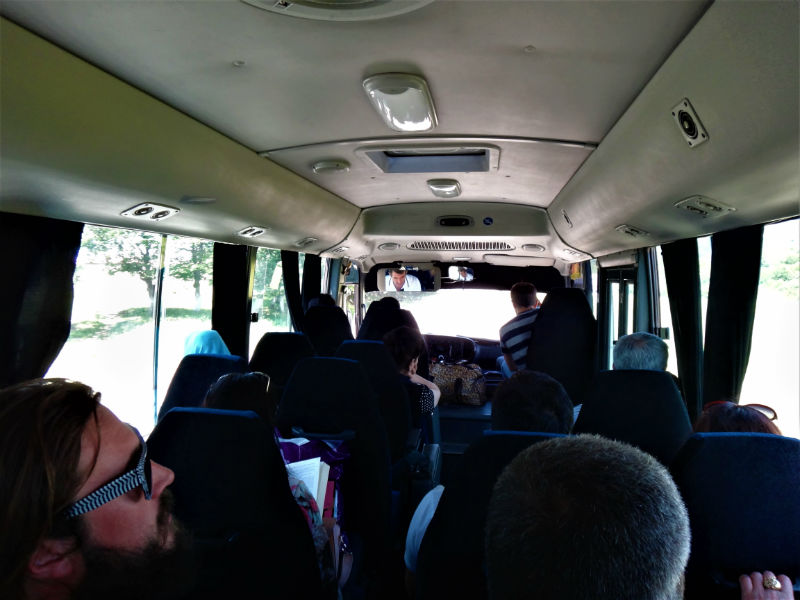 The Bus To Ismailli

The road to Lahic is more dirt track than road, roughly hewn from the cliff face and prone to land slides and rock falls. At points there’s barely room for even one car- let alone a minibus- to navigate the gravel and fallen rocks without plummeting into the river below, and if you meet any oncoming traffic… 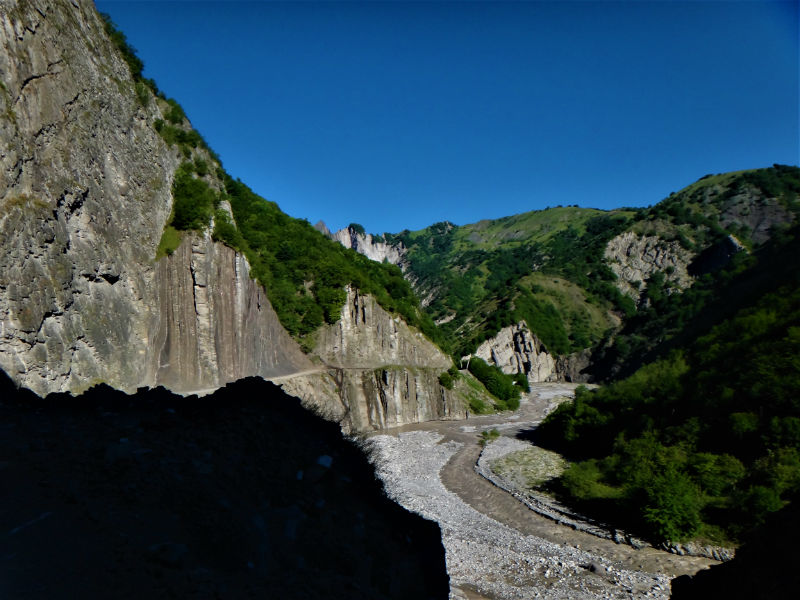 The Road To Lahic

Half way up this dangerous track- a route with stunning views across the valleys and into the mountains, scenes certainly worth dying a horrible death for at least- the road was blocked by innumerable flocks of sheep and herds of cows, charging down the mountain. There was nothing to do but stop as the sheep swarmed around the vehicle. They had the right of way in these lands. 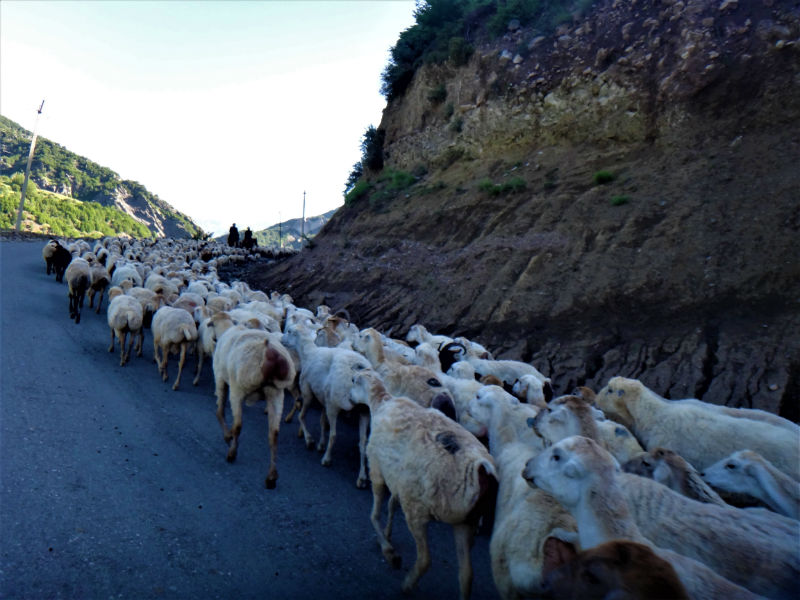 The sheepherders came cantering past, dispersed amongst the flocks on horseback, occasionally shouting or whipping out at the sheep to keep them going, their dogs hurrying along behind them. 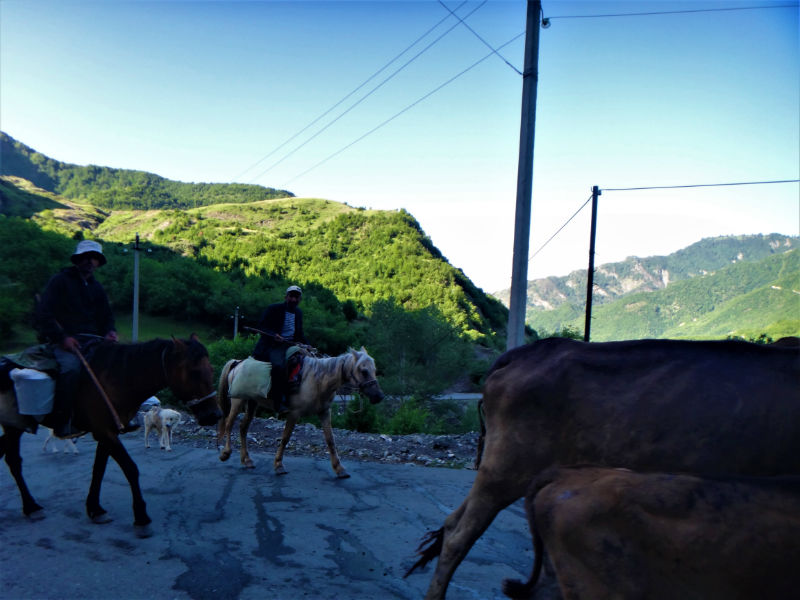 Before this road existed, Lahic was almost completely isolated. It’s a one hour drive from Ismailli now, but without the road, this is a journey that could have taken days in the harsh and mountainous terrain. Some of the nearby villages are still isolated, one village is only accessible across a narrow, rickety rope bridge spanning the gorge. 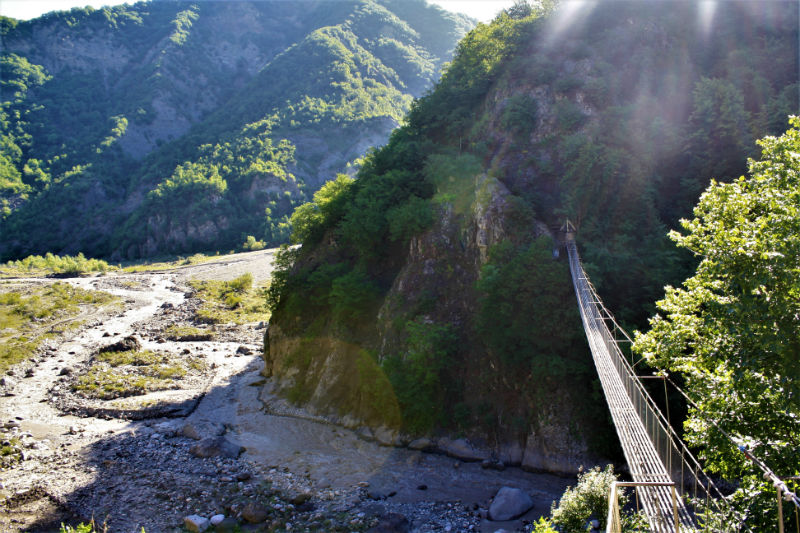 Lahic is famous across Azerbaijan, not only for its dangerous road and literally breathtaking- i.e. potentially life threatening- scenery,  but for its artisans, blacksmiths and copper craftsmen. 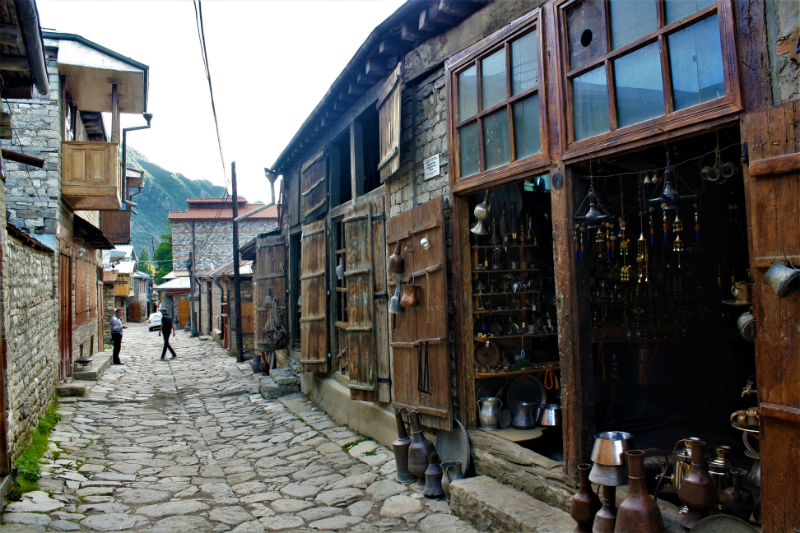 Copper Wares For Sale In Lahic

When the minibus reached the village, along the cobbled streets I heard the unmistakable sound of metal clanging on metal, as the copper artists and blacksmiths of Lahic worked away in their shops. 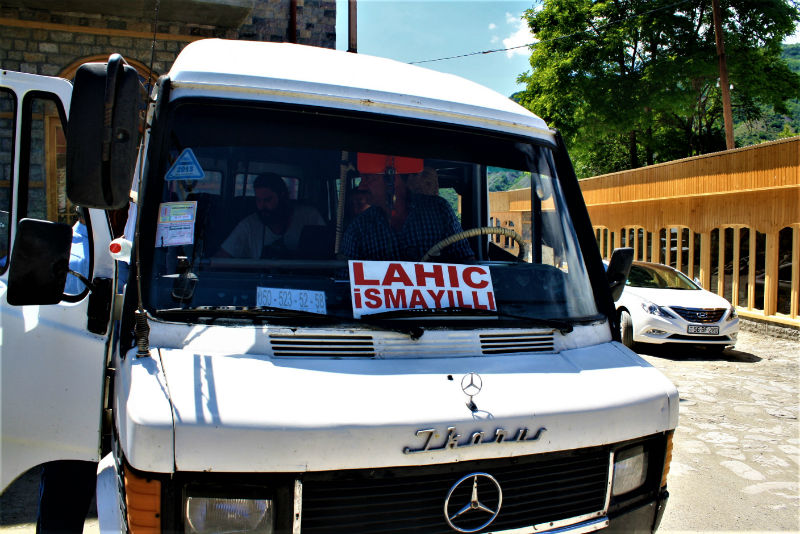 A man approached my travel companions and I as we clambered out of the bus, relieved to have not driven over the edge of a cliff on the way up to the mountain village, and trying to get our bearings. 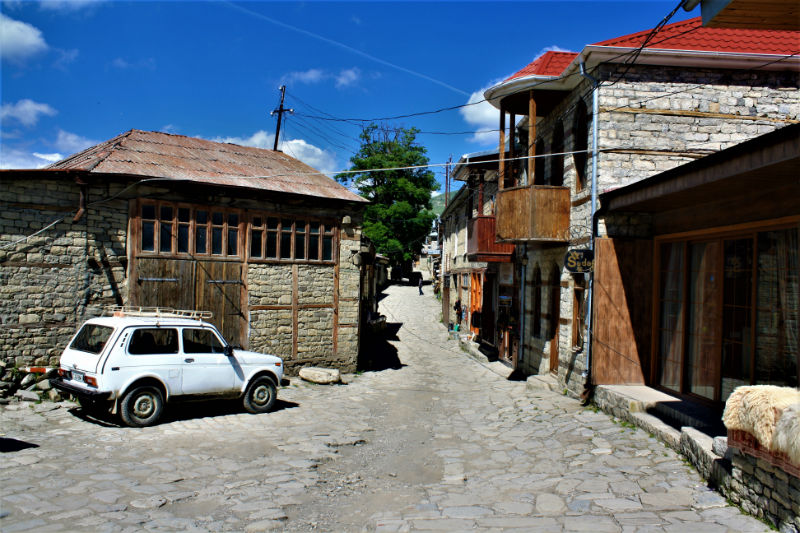 He had a home stay we could spend the night in, just around the corner. A local of Lahic, the owner claimed that he had once worked at the infamous Chernobyl Nuclear Power Plant in Ukraine- a place whose ruins I’d visited before myself. He drank vodka, offering shots out to us all too, and showed us newspaper clippings of his son, proudly explaining how successful he was. His son was an engineer, and like many of the younger generation of Azerbaijan’s villages, he’d moved to Baku- to the big city- to study, and to work. Away from the copper artists and blacksmiths of his home village, where opportunities in the mountains were becoming more and more limited. His son was successful enough in his work for the oil companies on the Caspian to have made it into the local newspapers several times, and all the clippings had been saved and put on display in the home stay’s small souvenir shop. 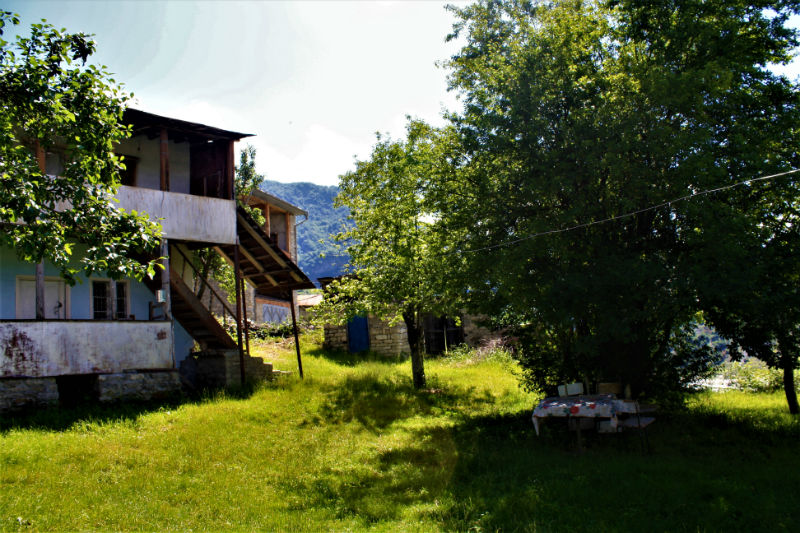 The Local Home Stay, The Garden Where Many A Vodka Was Consumed

The Copper Craftsmen Of Lahic.

The copper craftsmen here have handed down their trade from generation to generation, and even with an exodus of the youth to city it’s a trade that still continues, although these days primarily for the tourists who travel here to watch the artisans in action and to buy the famous copper works of Lahic. 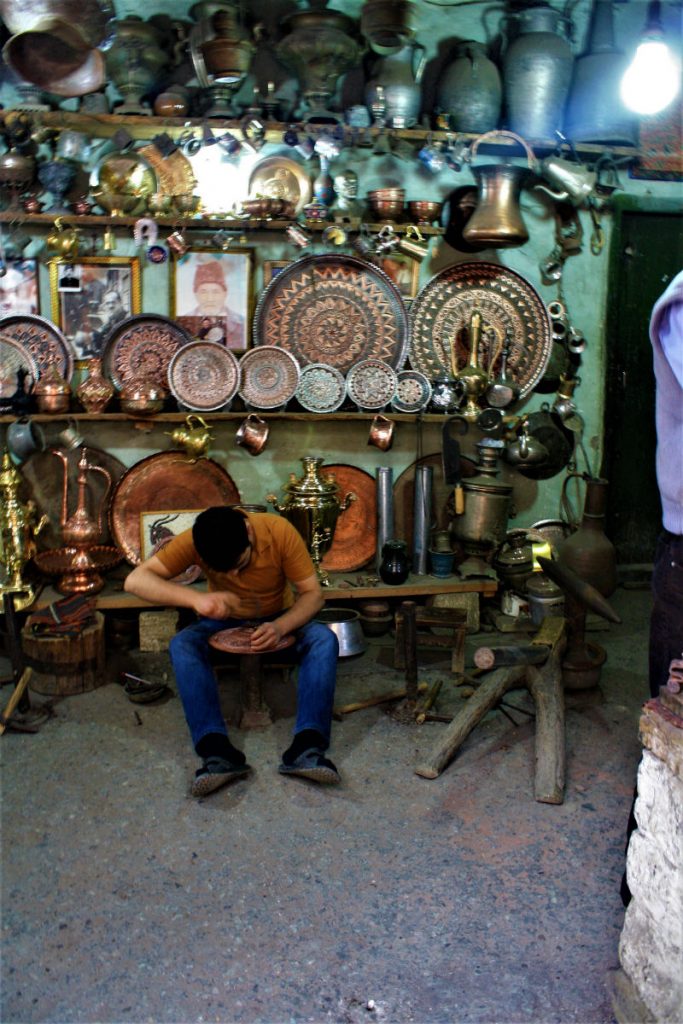 The village is perched on sloping ground overlooking the river which slices through the gorge we’d followed all the way from Ismailli. The streets are cobbled, and the houses made from stone. The copper craftsmen and blacksmiths open their wooden doors onto the streets to display their work and to give a glimpse of their skills. 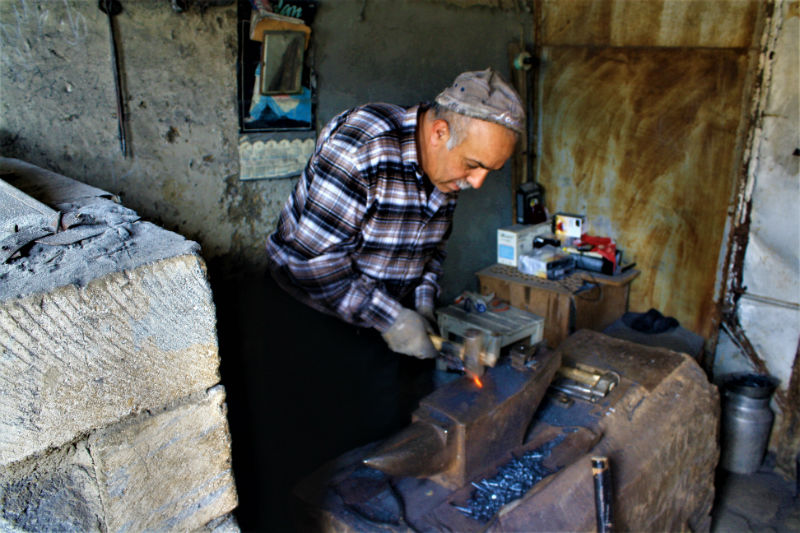 A Blacksmith In Action

From the shopfronts hung all manner of copper and metal works- all for sale of course. 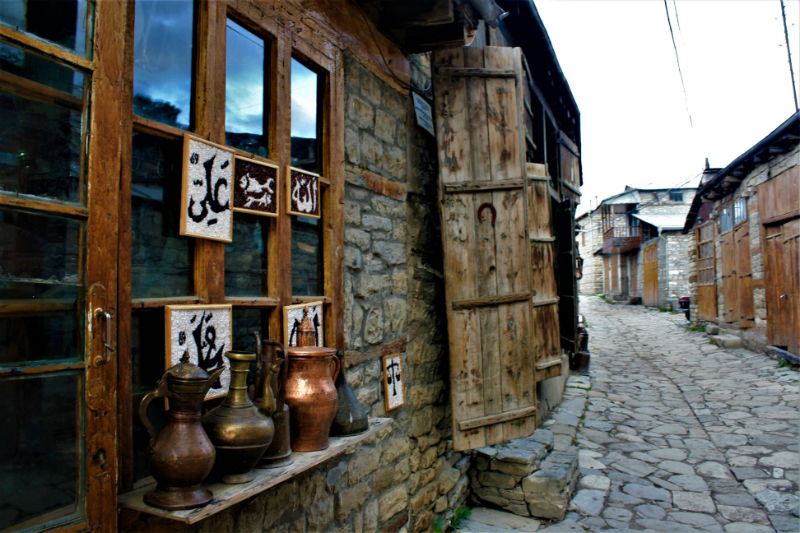 One man invited us into his smith, where he was making horseshoes. He said his father and his father before him had all worked in this same shop. He’d been here all his life, plying his trade in the village. He wasn’t selling souvenirs like the other shops we’d passed on the main street, but was making more practical metal works, presumably for the local villagers more than anyone else. 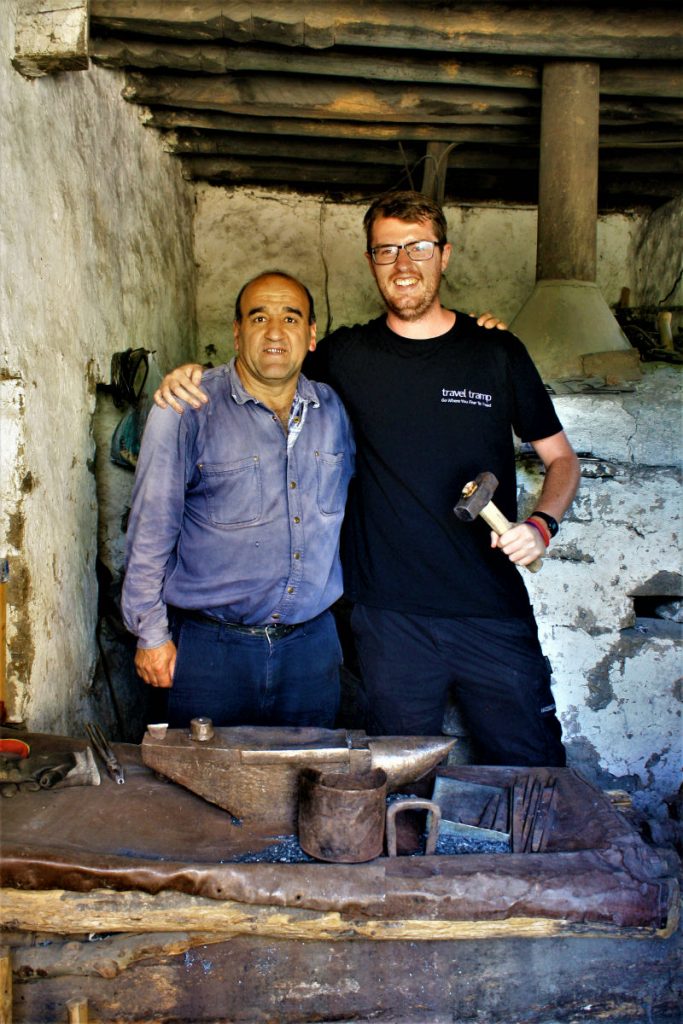 Away from the shops of the street, things were quieter on the cobbled streets. The locals were friendly, venturing out of their homes to say hello and to pose for pictures with the visitors while the odd horse riding local came trotting past. 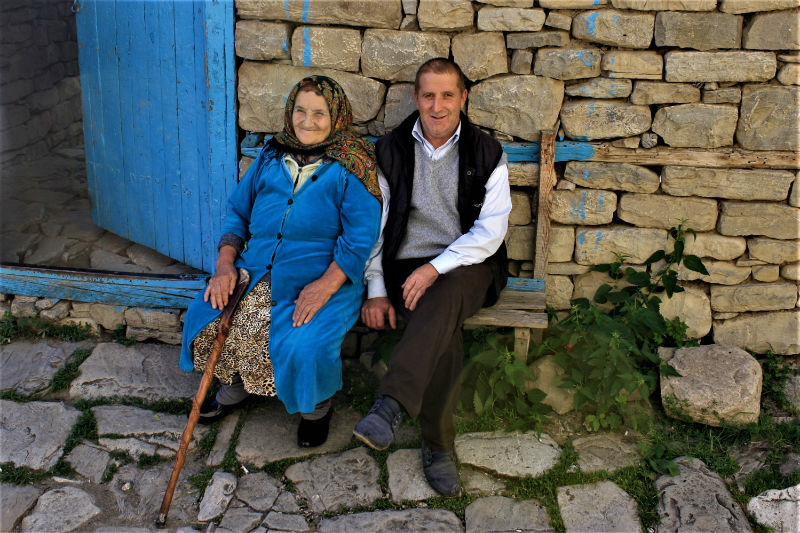 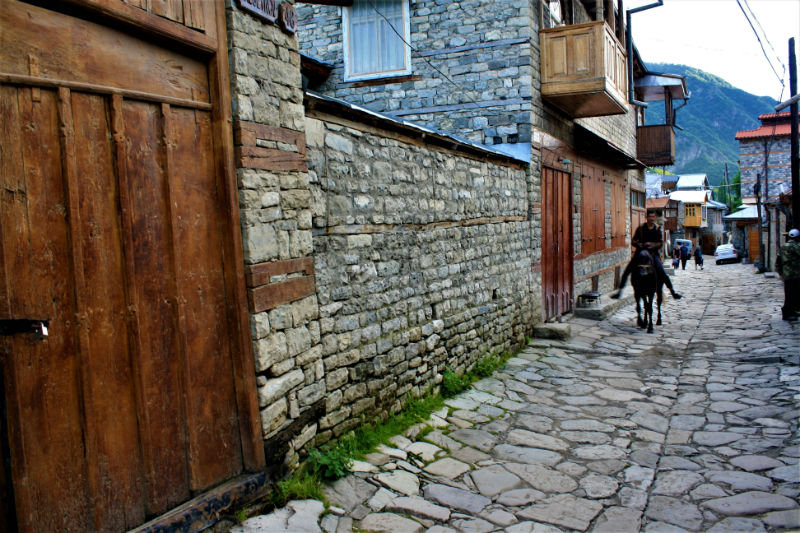 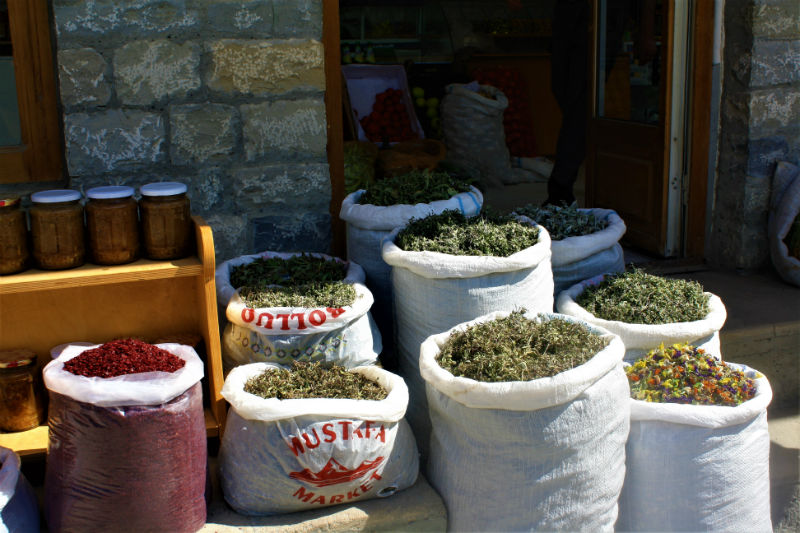 At the end of the village, the views across from the hilltop stretched over the river and beyond into the mountains. 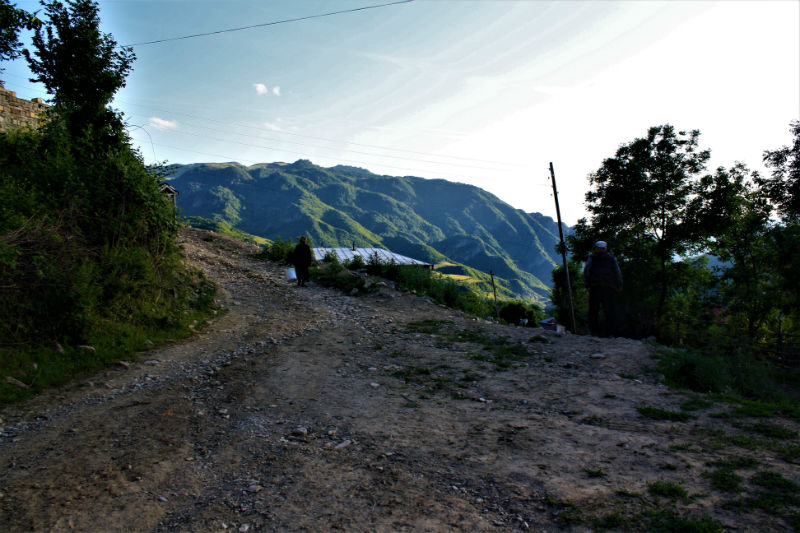 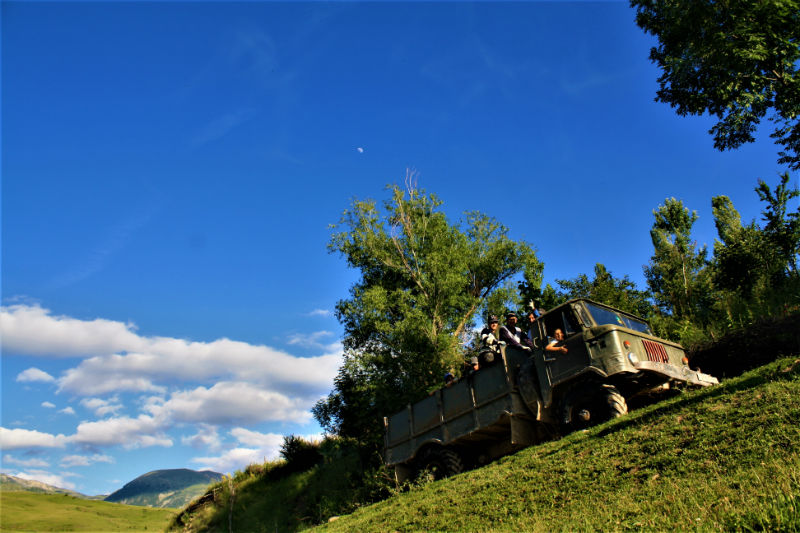 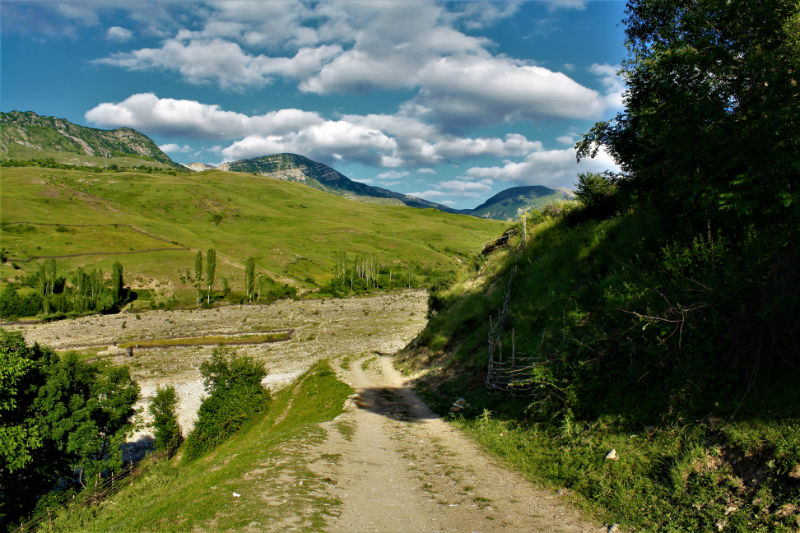 The next day we found a lift back down the dangerous dirt road, and all the way onto Baku. The home stay owner’s relative, a young guy carrying on the traditions of his village, was heading to the capital to showcase his copper working skills at a special cultural exhibition arranged by the government, and coinciding with the influx of tourists who were soon to be arriving for the Formula 1 European Grand Prix which was being hosted for the first time in Baku. He would be representing the culture of Lahic, and he was excited at the opportunity to show the world what this small mountain village was capable of.

But first we had to make it down the mountain…

There’s a few home stays available in Lahic, and with it being a small village then someone is more than likely to come and find you at the bus stop once word gets around that there’s a tourist around! The accommodation is basic, but the locals are all friendly and will be able to sort out dinner and breakfast for you too, so it’s an excellent way to experience local life and culture in the mountains.

You may find transport all the way from Lahic to Baku on your return if you are lucky, rather than having to change at Ismailli.