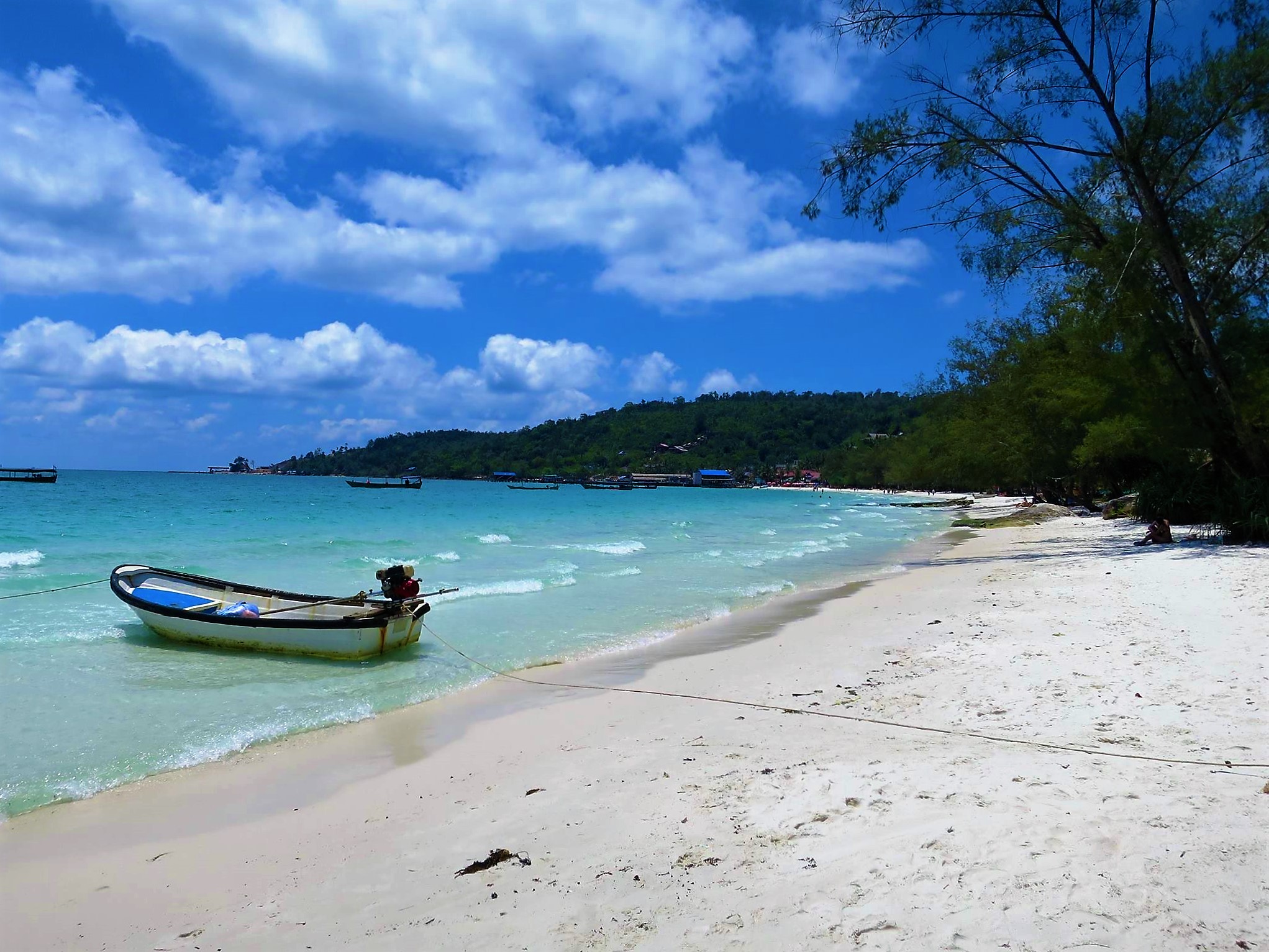 In today’s guest post, avid traveller Samantha Lego goes in search of paradise on Cammbodia’s island of Koh Rong, but she gets more than she bargained on.

Nursing a hangover made harder by the rocking of the three-hour slow boat, I disembarked across a single plywood board.

As I unsteadily got off the boat, I was hustled to the side as men unloaded everything from livestock to furniture. Regaining my balance and fighting down the nausea, I finally became aware of my postcard perfect surroundings.

White sand, wooden bungalows and vibrant turquoise waters all cumulated into an idyllic island paradise. Bright fishing boats bobbed on their anchors and bathing suit-clad backpackers walked along the main sand strip. I took all of this in as I trundled down the dock with my pack, shedding my shoes as I went. 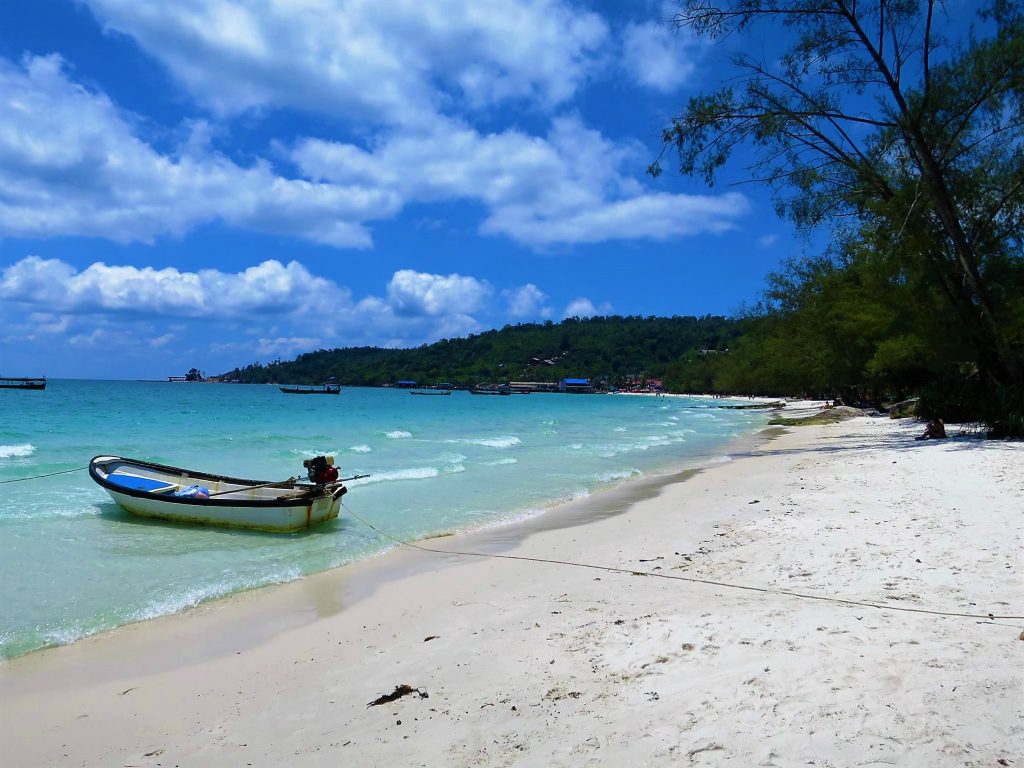 I dug my toes into the sand and happily strode forward, only to be suddenly yanked back by an islander.

In broken English he pointed down to the sand. A run off of murky coloured water lay just where I would’ve put my foot.

“Don’t do that lady,” he intoned. “Very bad, all shit.” And with that he gave a chuckle and strode off.

I looked down, examining the mysterious water closer and noticed that it ran directly from underneath one of those quaint bungalows all the way to the ocean. As I looked further down the beach I noticed each building had its own brown-grey run-off through the sand.

Welcome to Koh Rong, the beautiful island getaway where the shit literally flows into the sea. 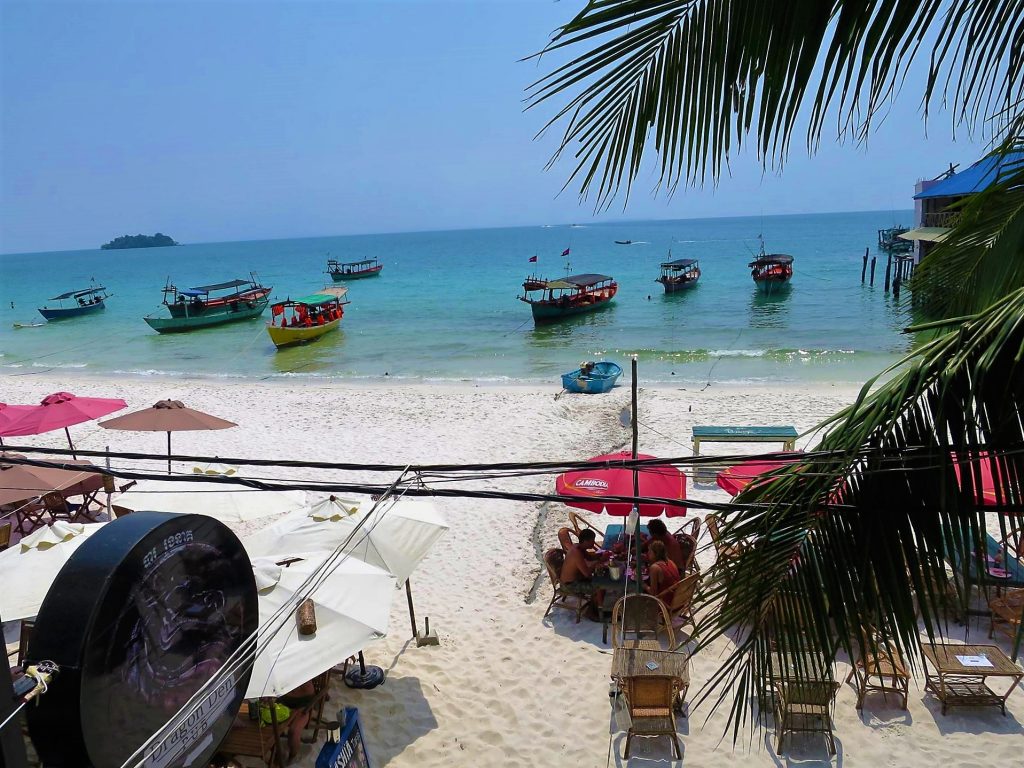 The main strip on the island is actually just the beach. No need for shoes, just watch your step.

Situated 25 kilometres off the southern coast of Cambodia and with over 43 kilometres of beach, this pristine island is surrounded by azure seas and populated by blissed out beach bums.

Most tourists are fleeing the 24-hour party town of Sihanoukville, trying to erase their hangovers and restore their dignity on the soft, isolated sand of the islands. And with no ATMs, no roads, no medical facilities and a constant stream of power outages, on Koh Rong you could lose yourself for days. Or even weeks.

Accommodation is basic, with rickety fans, manual flush toilets and a laughable Wi-Fi connection. Yet the rustic charm continues to draw in more and more travellers.

As I settled down on the beach and cracked open a much-needed beer, other travellers smiled and introduced themselves.

“Welcome to Shit Island,” one Dutch backpacker said. “I hope you like vegetarian food.” 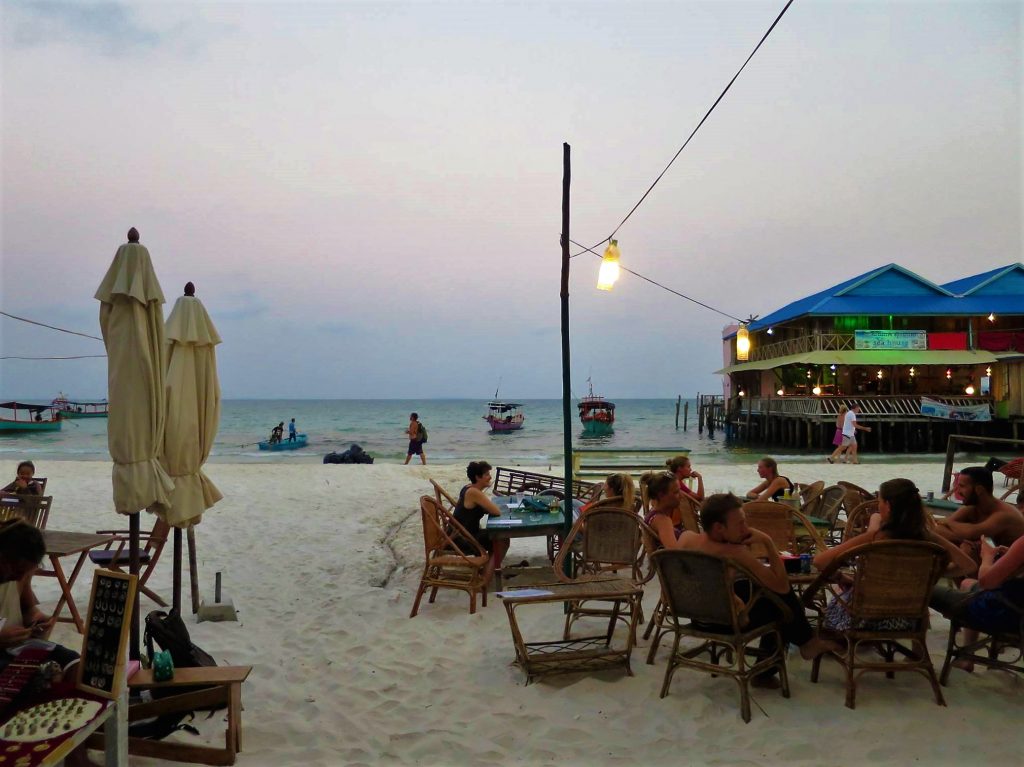 Groups of travellers spend their evenings on the beach drinking beer and swapping stories.

With the constant power outages and spotty refrigeration, a staggering amount of visitors get food poisoning from eating spoiled meats. Others contract infections from swimming too close to the sewage points while they have open cuts.

Yet swimming is possible and very much encouraged on Koh Rong, especially when temperatures soar into the late 30s. The southern tip of the island is clear of all buildings, making it a safe place to swim.

In fact, Koh Rong is home to a thriving sea life with snorkelling and diving options readily available.

But Koh Rong’s biggest marine draw are the boat trips which head out nightly. Visitors load up on beer and head out into the pitch darkness. When the lights from the island are all but extinguished, everyone jumps overboard and watches as the water starts to glow.

And no, it’s not because of the weed they bought at the beach bar. It’s phosphorescent plankton that live in the surrounding waters

Many visitors realised the importance of preserving this slice of paradise and, after much petitioning and agreement talks with the government, Koh Rong has the only protected marine management area in the country as of June 2016.

Yet with no developed infrastructure and an ever-increasing influx of visitors, waste management is non-existent. Uncovered sewage spills into ditches, filters through the sand and empties into the water with unchecked environmental consequences. 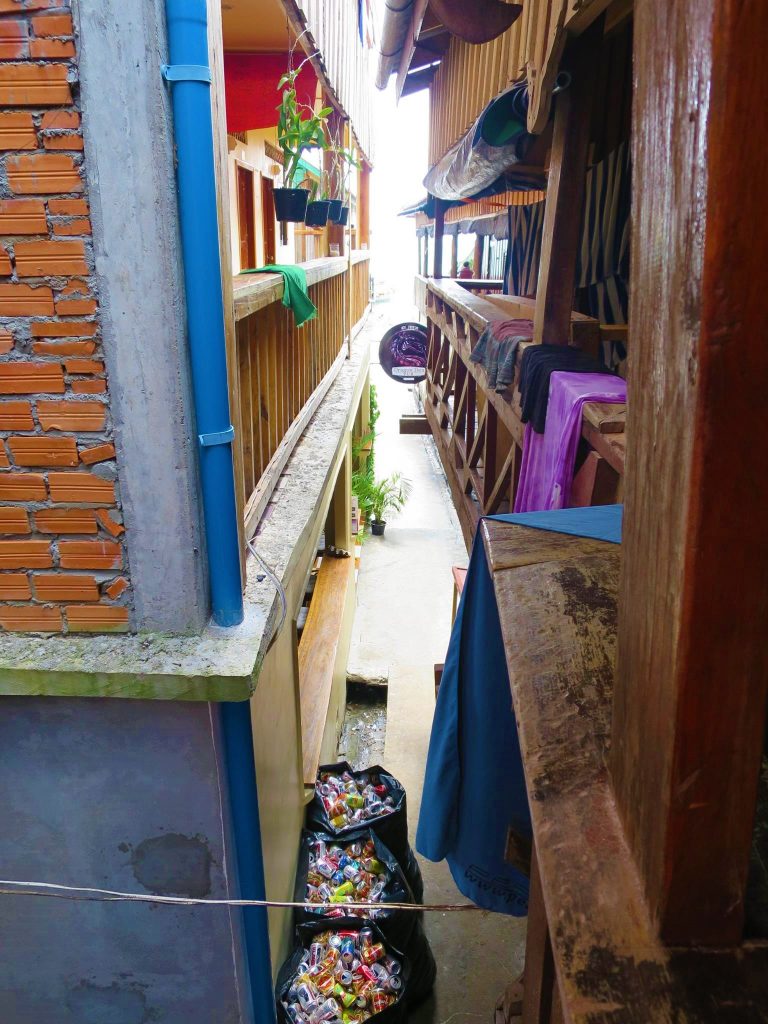 Alleys between accommodation smell faintly of sewage and are littered with rubbish bins, laundry lines and drying clothes.

Sadly, it is not an uncommon method of removal for islands without adequate plumbing.

Combine the stench of sewage, and the extreme humidity and at certain times of the day Koh Rong smells, well, wrong.

Badly in need of upgrades, rumours abound about the Cambodian government selling the rights to turn Koh Rong into a resort island. It’s not outside the realm of possibility considering its proximity to the famed Thai islands, although these proposals have experienced loud backlash.

Part of Koh Rong’s charm is that it’s undeveloped. Visitors feel as if they’re experiencing what their predecessors must’ve felt after they washed up on the shores of Thailand or Indonesia in the 1980s.

Yet development is unavoidable of course. So to truly experience Koh Rong at its finest – and smelliest – travellers should go now. Just remember to watch where you put your feet.

An avid explorer, thrill-seeker, pen-wielder and coffee connoisseur, Samantha Lego wanders the globe, getting lost in interesting places and swapping stories with people much cooler than her. To read more of her stories, go to www.samanthalego.com.