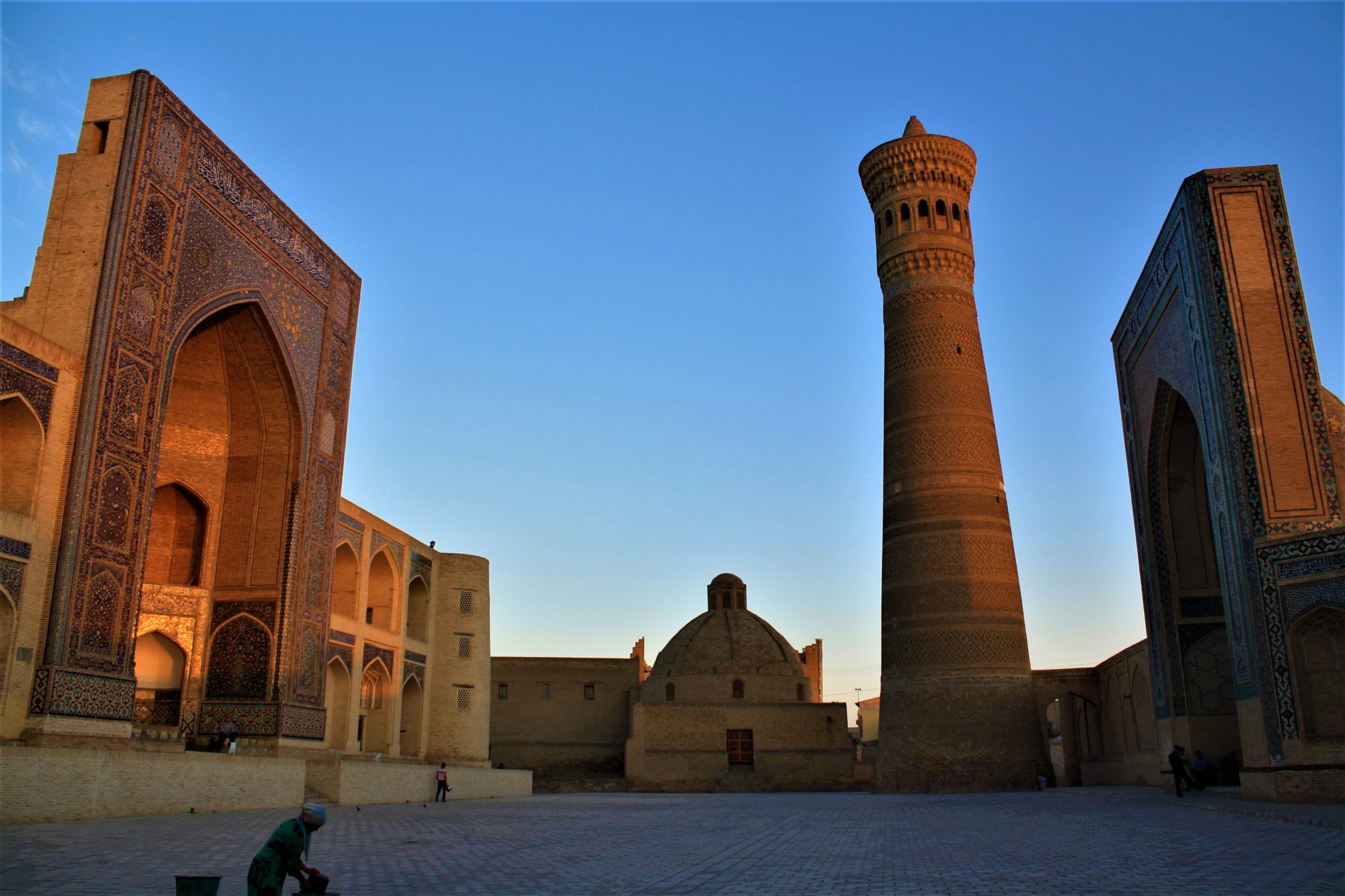 Bukhara, the beautiful Silk Road City with a dark history.

Bukhara is majestic. It’s beautiful. Sand stone buildings, tall minarets and vast mosques greet the traveller who arrives in what is one of Uzbekistan’s, and Central Asia’s finest and most historic cities.

But beneath the towers, walls and idealistic romanticism of this famous city, Bukhara, like many of the ancient settlements which have survived through the ages along the Silk Road, has witnessed destruction and brutality. 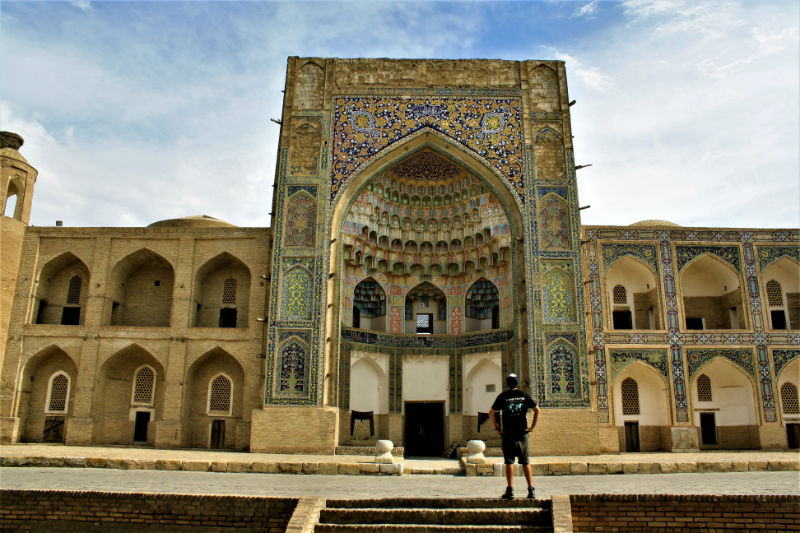 The Tower Of Death.

Bukhara’s Kalyan Minaret is one of the tallest and most dominating minarets in all of Uzbekistan. I stood beneath it looking skywards towards its peak, surrounded by the vast Po-i-Kalyan Mosque and Madrassah- an Islamic place of learning- which encompasses it. 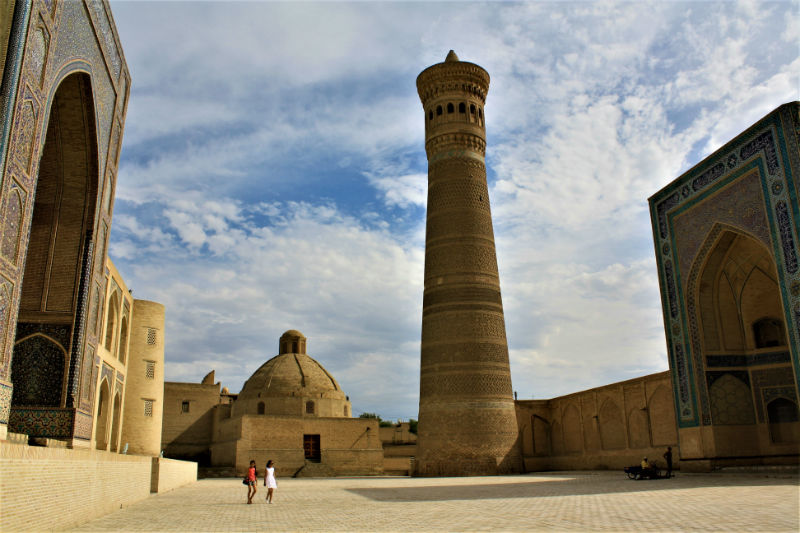 This is the ‘Tower of Death’, it would be climbed for the call to prayer, and at the same time functioned as a place of execution. Criminals would climb this intricately ornate tower to be thrown from the top- a staggering 45 metres high- to their deaths in the courtyard below. 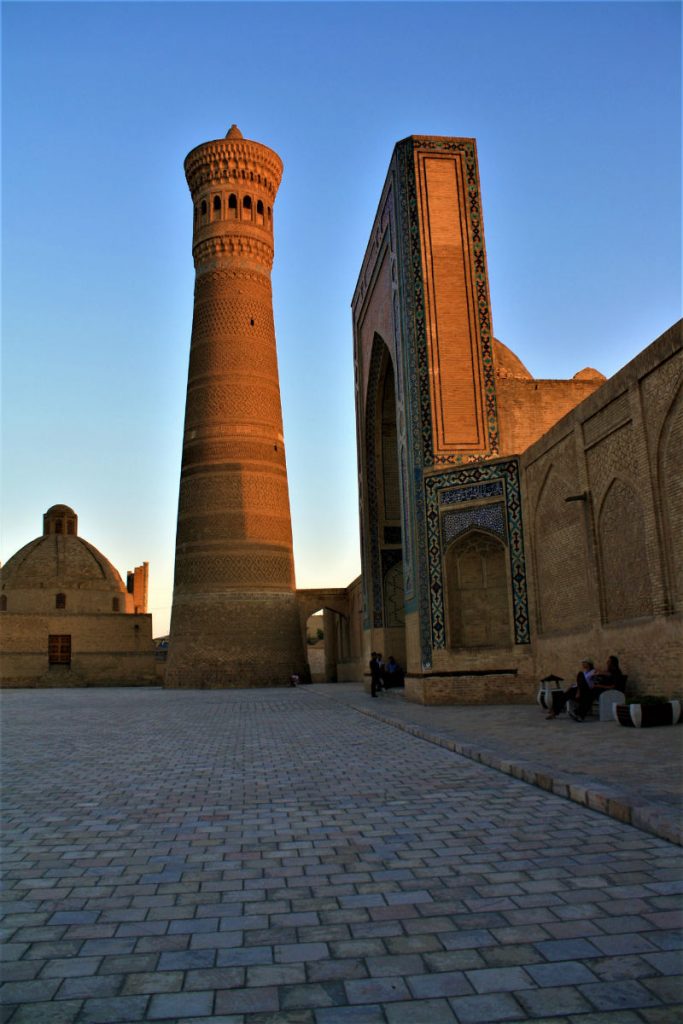 Genghis Khan, the great Mongol conqueror who pillaged his way through these lands in the 12th Century, stood where I was, looking upwards and marvelling at the engineering ingenuity that had allowed the construction of such a tower. During his invasion of what is now modern day Uzbekistan, he destroyed Bukhara, he slaughtered the people who lived here, but he spared the Kalyan Minaret, astounded as he was by it. 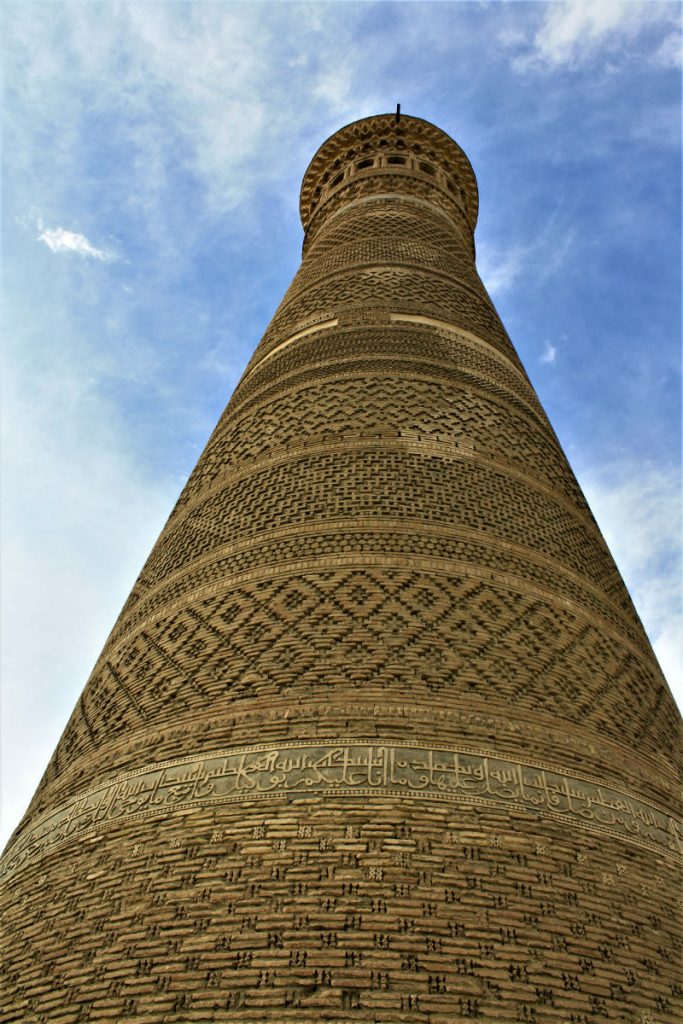 The rest of Bukhara burned at the hands of Genghis Khan’s army.

Bukhara is at once the epitome of the Silk Road, architecturally stunning and historically mesmerising, but a place that has suffered throughout its long history.

The Ark Of Bukhara.

The Ark of Bukhara is a defining feature of the city. A fortress from which rulers ruled and the powerful Emirs of Bukhara exerted their power. The city dates back centuries, and the Ark does too. And just as the city has been built and destroyed innumerable times through the ages, so too has the Ark. But it still stands today, having been rebuilt and rebuilt after every destruction. 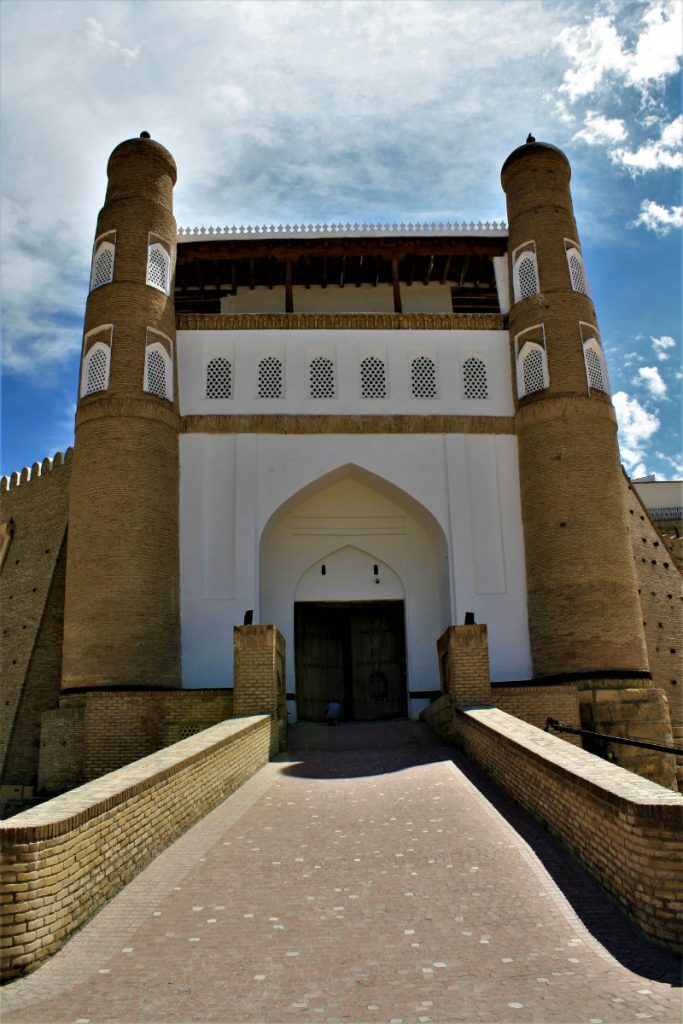 The last destruction was at the hands of the Russians in the 1920’s, when the Soviet Red Army, after winning the Russian Civil War, descended upon Central Asia to claim what had been provinces of the Russian Empire in the previous Century. They burnt the Ark to the ground, firing high explosive shells to which the Bukharans had no response. The last Emir of Bukhara- Mohammed Alim Khan– fled as the Ark burned, his resistance a failure, and Bukhara lost its independence for the final time, eventually becoming a part of the Uzbek Soviet Republic, and then the modern nation of Uzbekistan. 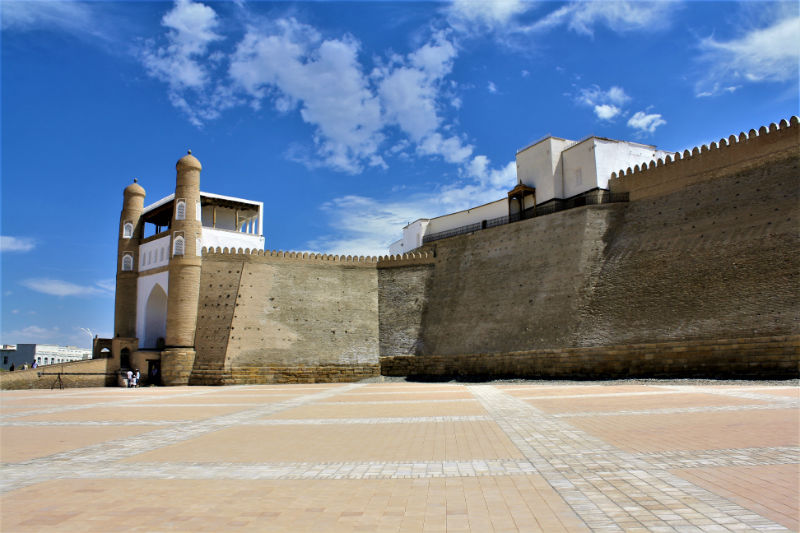 I stood on the dusty public square in front of the Ark, a few tourists that had braved the journey this far into Central Asia, were stood under their parasols as the Emirs of old were. Like the square beneath the Kalyan Minaret, this was also a place of public execution. 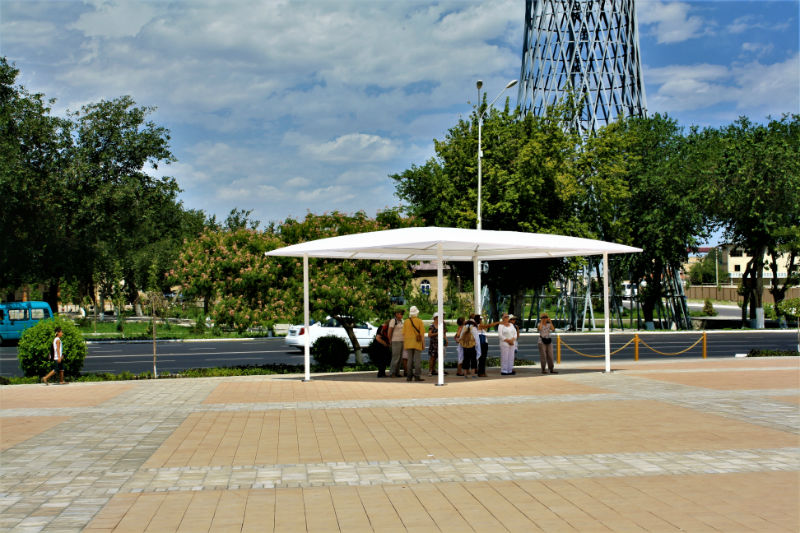 Mohammed Alim Khan may hold the title of the last Emir of Bukhara, but he wasn’t the first Emir to resist the empire builders of the Western world. 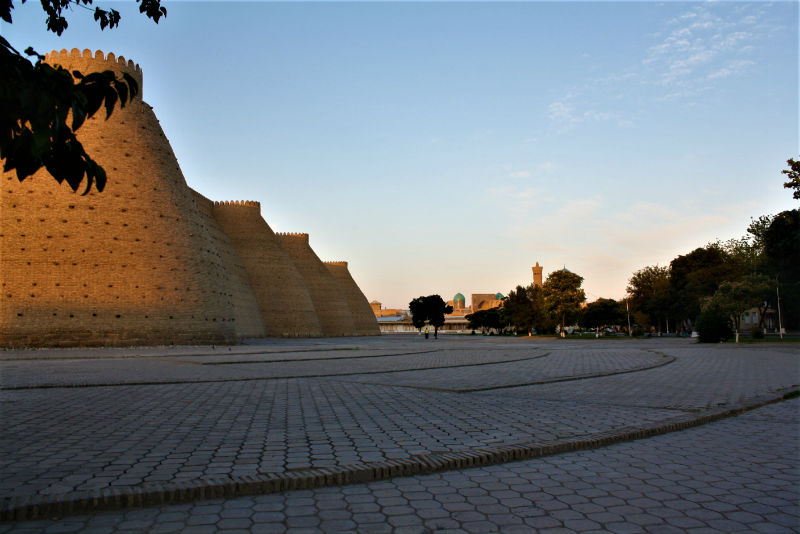 From the fortress ahead of me, the Emirs of this Silk Road city had ordered and witnessed the deaths of countless prisoners, who were then buried in the sand they fell upon. Two of the most infamous executions that occurred here were those of two British Officers in 1842, Colonel Charles Stoddart and Captain Arthur Conolly, who were killed by the despotic Emir Nasrullah Khan on charges of spying for the British Empire. 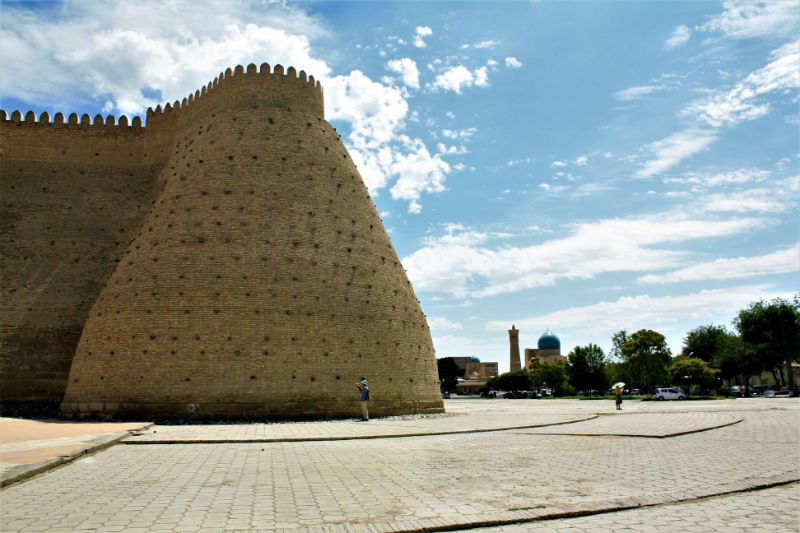 Bukhara was being courted by Russia and Britain during the years of the Great Game as both empires expanded and sought buffer states between themselves. Stoddart had been sent on a diplomatic mission in 1838, but angered the Emir by riding his horse to the gates of the Ark, and arrogantly disrespecting the ruler during his stay in the city. He was arrested, and in 1841 Conolly attempted to secure his release but he too blundered and was also arrested. 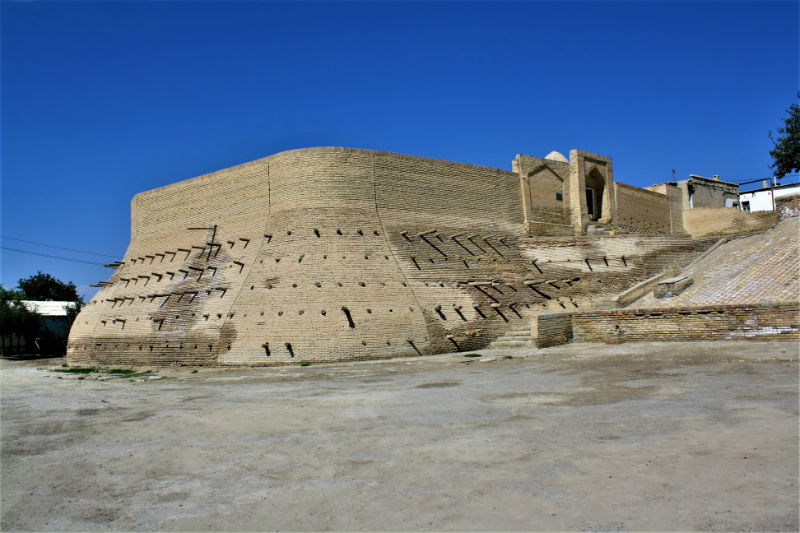 Before their demise in the square in front of the Ark, both the British officers were periodically thrown into the hell hole of the Emir’s ‘Bug Pit’, a literal hole in the bowels of the nearby Zindon Prison, a rat and insect infested pit only accessible by rope. The two men endured these harsh conditions, becoming infested with lice, scarred by bites and tortured immeasurably before the Emir decided he had no need for them, and beheaded them in 1842. 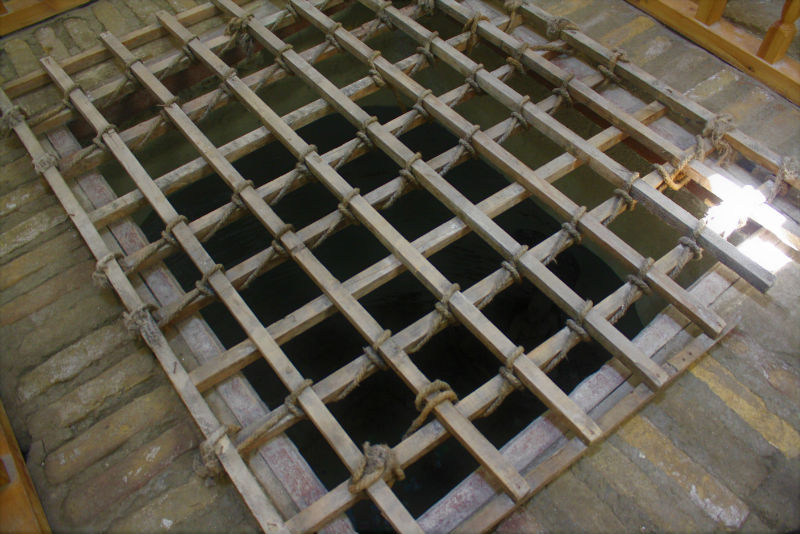 A City Of Learning.

Like all Silk Road cities, in Bukhara brutality and death came hand in hand with learning and the arts. The Ark might be one of the most imposing monuments in the city, but more numerous are the mosques and the Madrassahs. 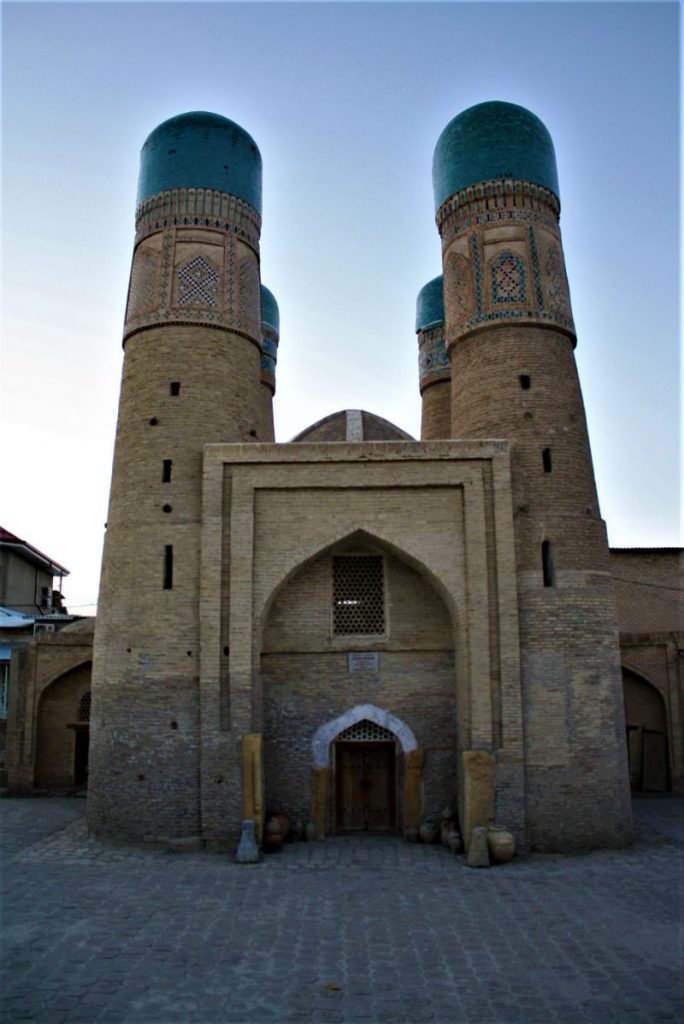 The beautifully designed and intricately engraved buildings crowd the sun baked streets. Death may have stalked these streets and squares in days of old, but so did artists, scientists, merchants and traders. It was a thriving Silk Road city, and to escape the haunting tales of the Bug Pit and the Ark, I end my journey through Bukhara at the Chor Minor- which translates as four minarets- an unusually designed Madrassah with four blue towers, hidden away on a quiet back street in the old city, and a place scholars and students would have visited to teach and to learn, and to give Bukhara the learned reputation it deserved in Central Asia.