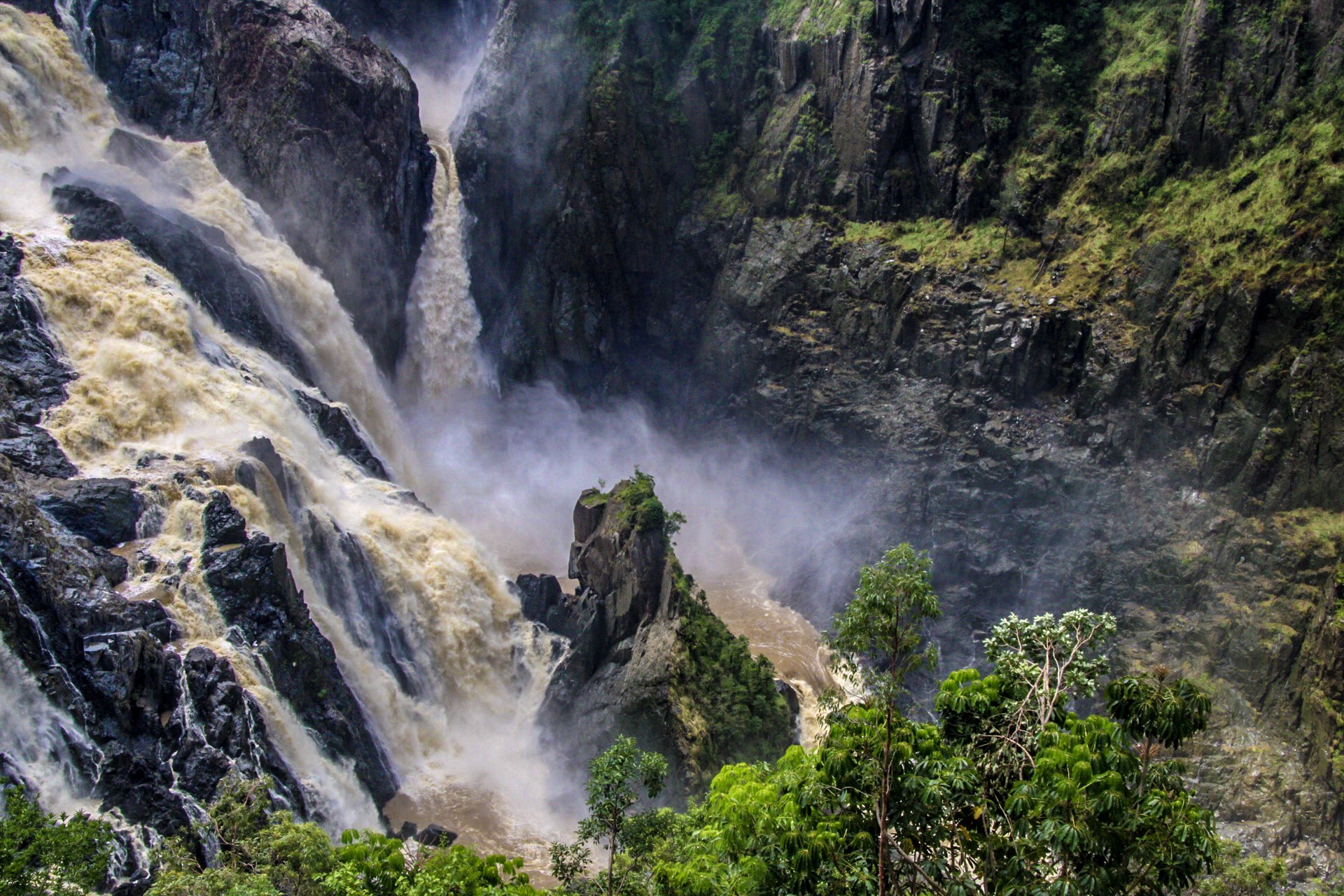 I stood far above the Barron Falls in Far North Queensland looking straight down at the raging torrents below me churning up rocks, mud and water in a way that I had never seen before.

Never before in my travels across the world had I seen such a powerful waterfall in such full flow, and I watched in awe as the Barron Falls near Cairns tore down the rock face and plummeted huge volumes of water over a hundred metres below.

This was the full fury of nature on display right in front of me.

This was Queensland’s epic Barron Falls in full force. 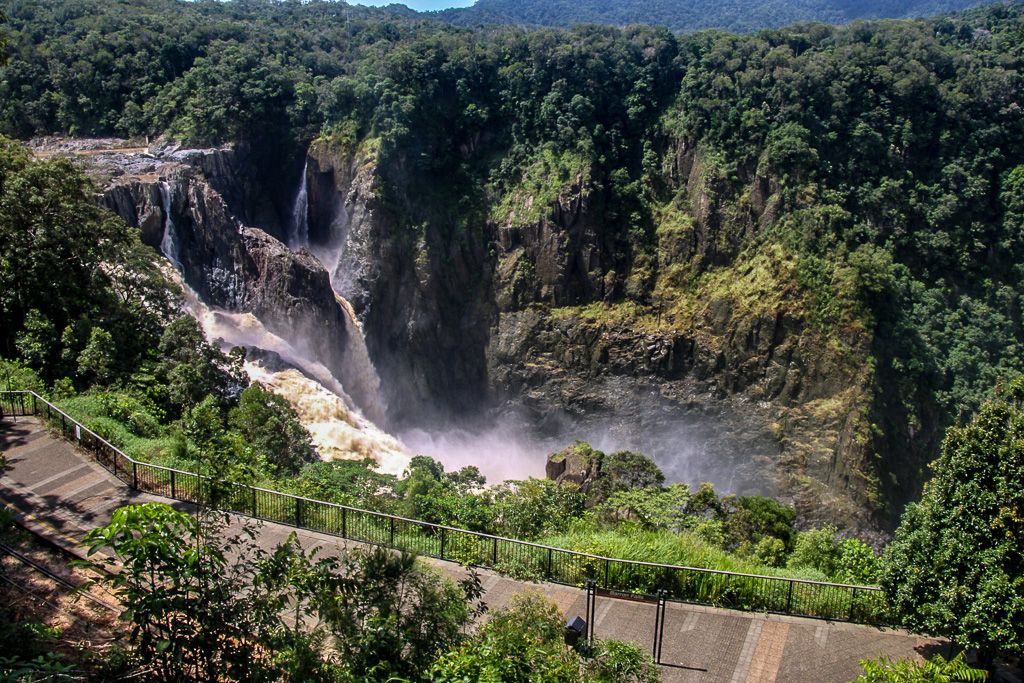 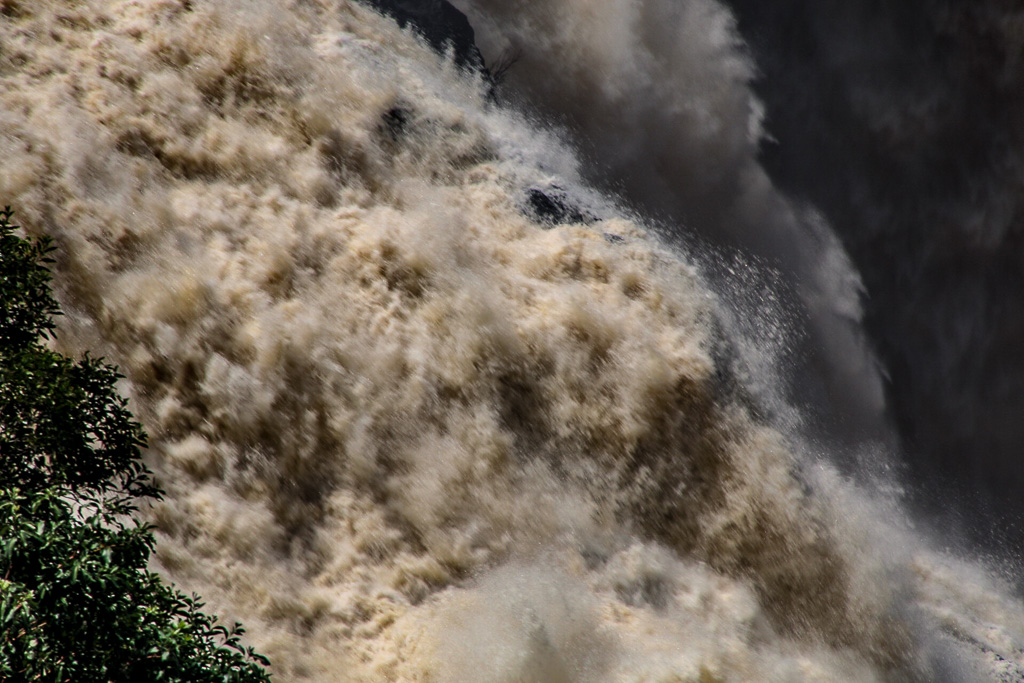 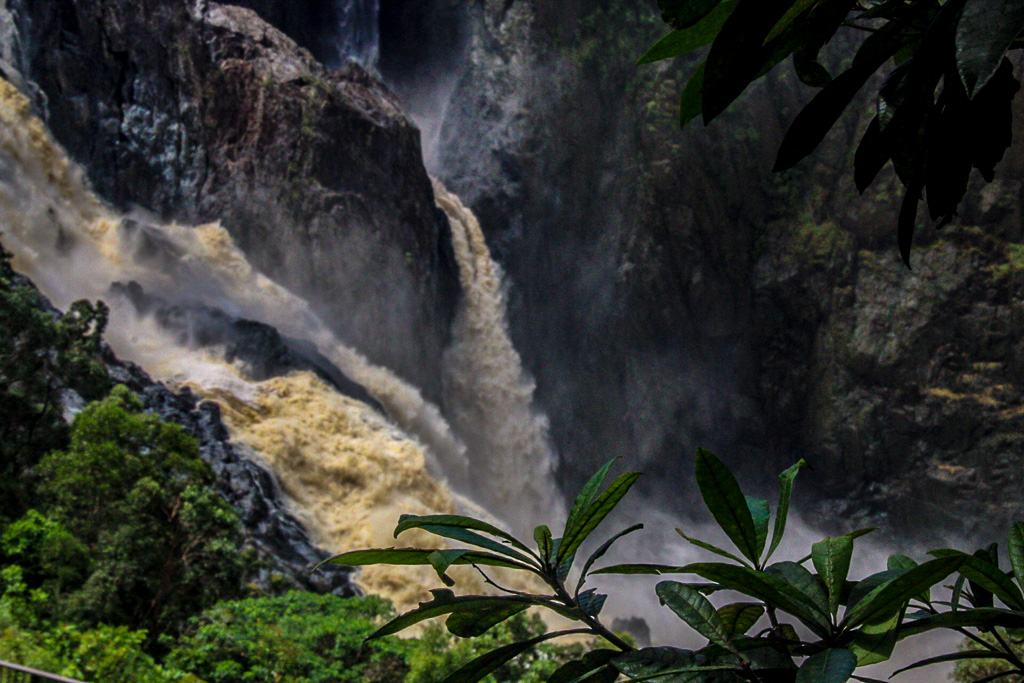 Barron Falls is found just outside of the city of Cairns, in Far North Queensland. It’s one of the largest waterfalls in not only Queensland, but the whole of Australia too, with a huge height of 125 metres.

The falls are tiered, and the largest single drop at any one point in the cascade is 107 metres in height, with the many levels simply adding to the staggering  natural beauty.

Barron Falls is not only tall though, it’s wide. The longest section stretches at the top to 259 metres in length and the average width of the falls is 137 metres as the water tumbles over a hundred metres below.

It’s a sight to stand in awe of, but for a waterfall with such monstrous statistics, it only ever shows its full force once or twice a year after heavy rains. The rest of the year, visitors will only ever see a minute trickle of water cascading gently over the huge rock face.

I was visiting Cairns when the rains hit hard in March though, and I witnessed the full force of Barron Falls after a tropical storm. 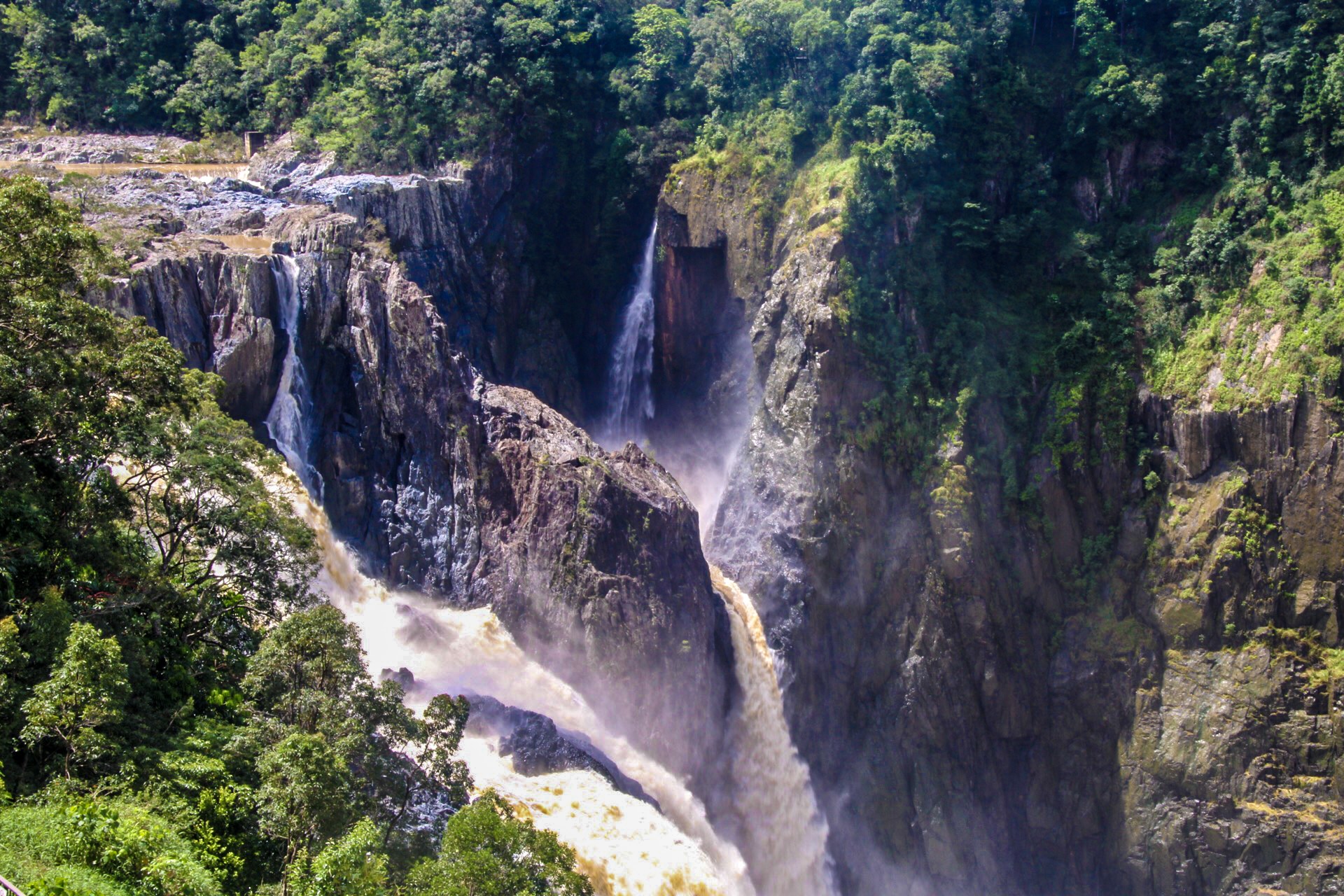 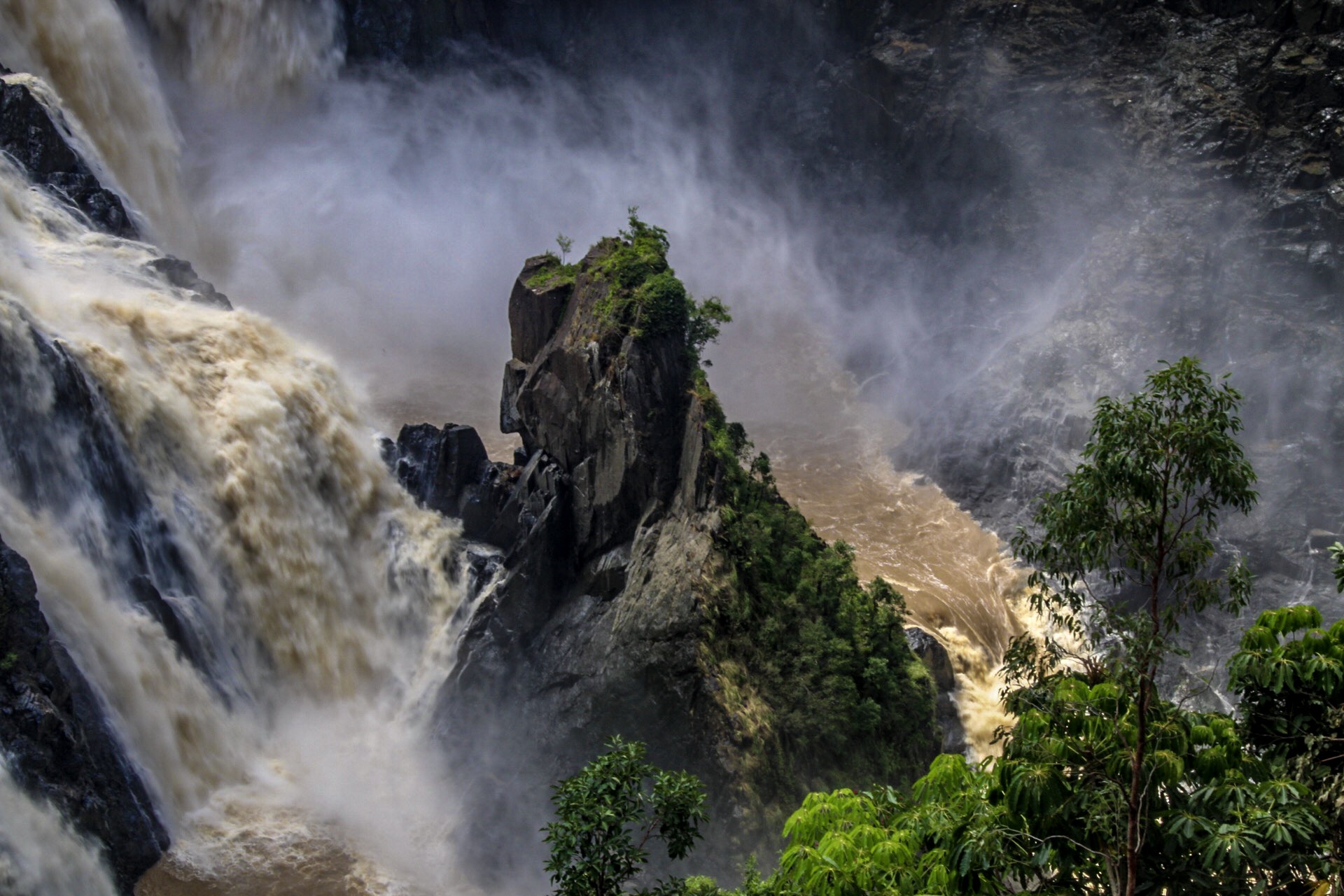 Although it was the end of March and supposedly the end of the rainy season, Australian weather is unpredictable. I had been expecting the start of the dry season, no rain and a small trickle of insignificant water running down Barron Falls.

The day I was planning on making the journey outside of Cairns to see the falls, the rains hit hard.

It had been an unexpectedly long rainy season already. On my drive up north from Brisbane at points the rain had caused massive flooding as late as the end of March, so perhaps this year it was to be expected that there was one last tropical storm surge waiting to be unleashed upon Far North Queensland.

And unleashed it was.

The rains fell hard over night, even washing away a caravan park and completely cutting of roads out of Cairns.

From the safety of my hotel room – luckily on high enough ground – I saw the news channels filled with pictures of submerged roads and the crashing waters at Barron Falls.

The unexpectedly furious falls became a symbol of the huge, late rains, and I had to see the falls as soon as the roads were open again. 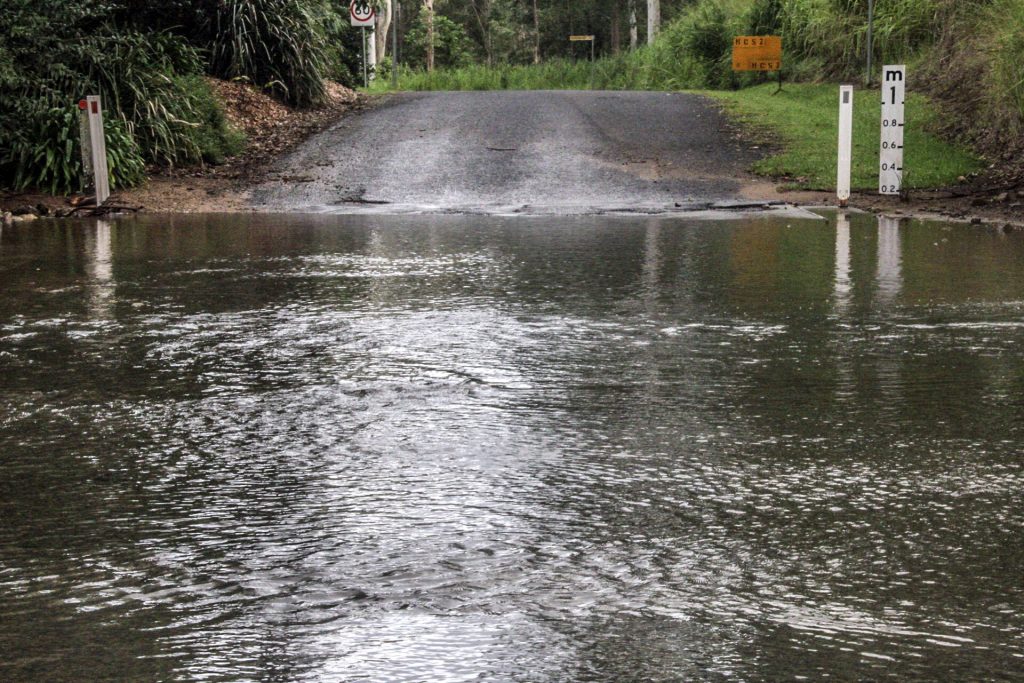 The rains were disruptive, dangerous and destructive. Australians in this part of the country though just seem to get on with whatever is thrown at them, despite the odds stacked against them.

Just a few days after mudslides had roared down the mountains, the roads were clear and the mountainside community of Kuranda- where Barron Falls is located – was very much open for business again, even if some residents had to wade through water and mud to get to their shops.

Kuranda is a strange little town up in the hills around Cairns, where a hippie vibe meets the rainforest. It’s really just a town for tourists, catering to visitors travelling up to the heights above Cairns for the views and the waterfall, but a vibrant, artistic community has grown up around this to make Kuranda their own little place away from the city of Cairns.

It was quieter than usual in Kuranda, the rain had caused the scenic tourist railway from Cairns to be temporarily closed and less people were braving the roads in case the rain hit again and caused more landslides or road closures.

For me though, this was the perfect time to visit a usually touristy destination – when there were less tourists. 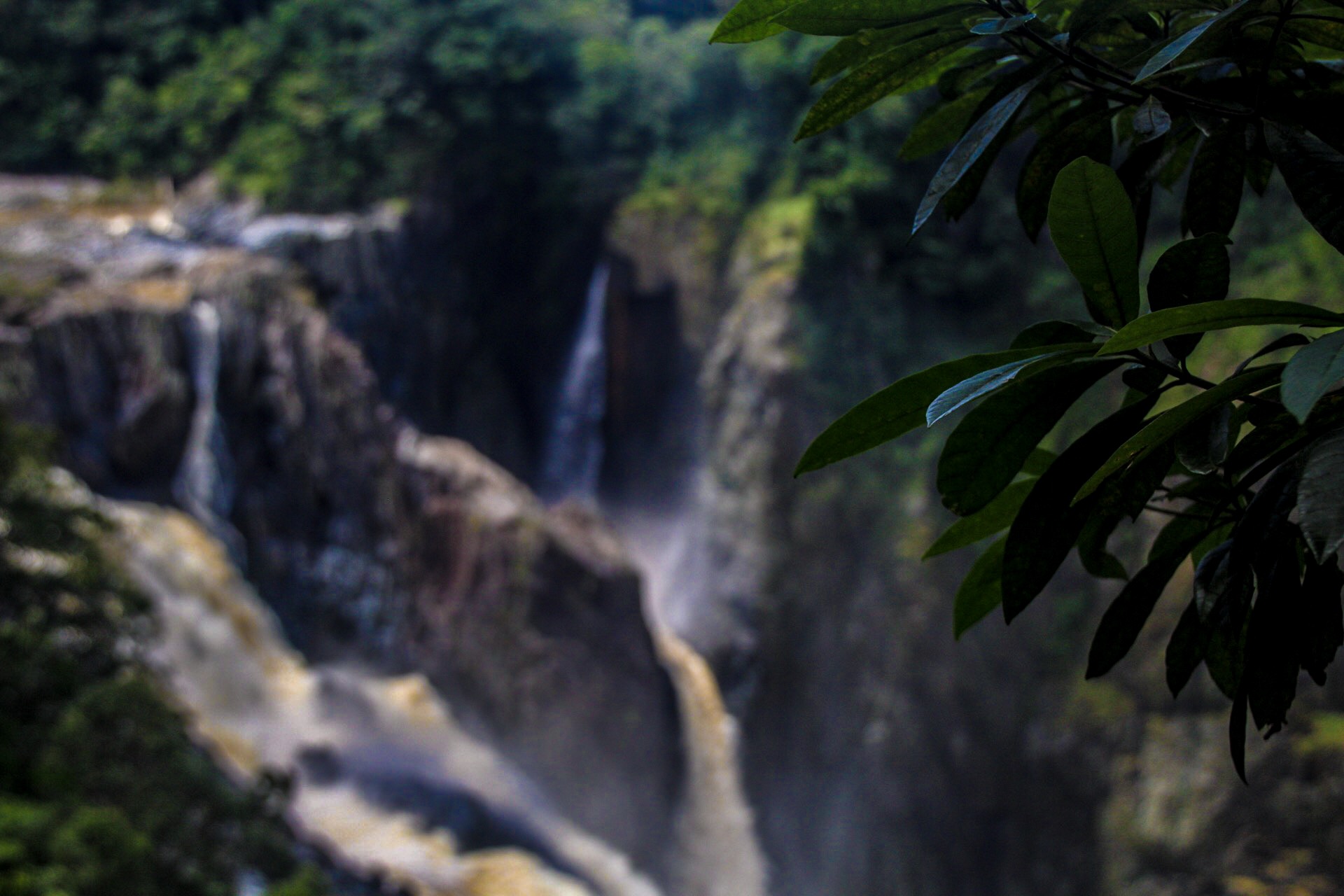 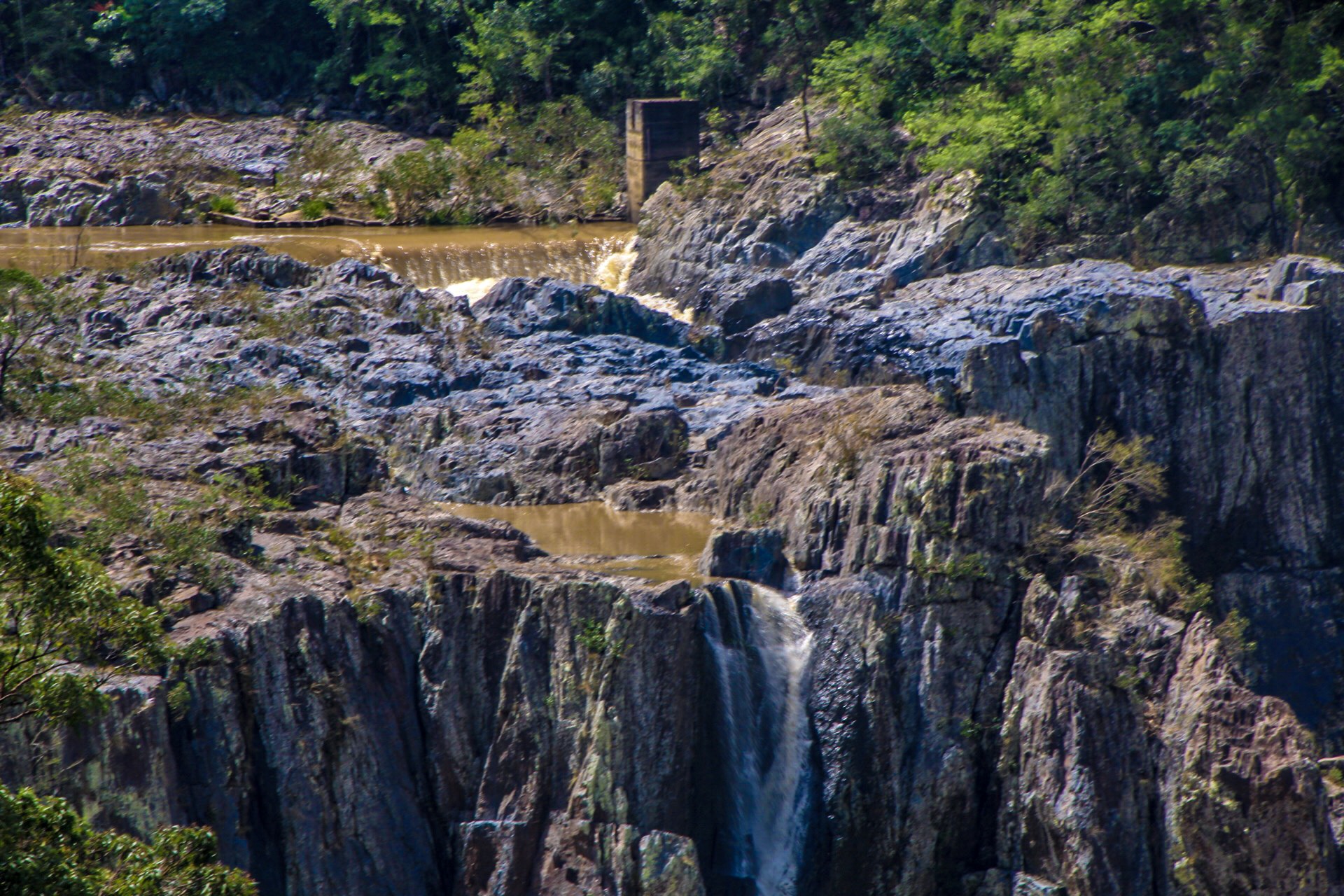 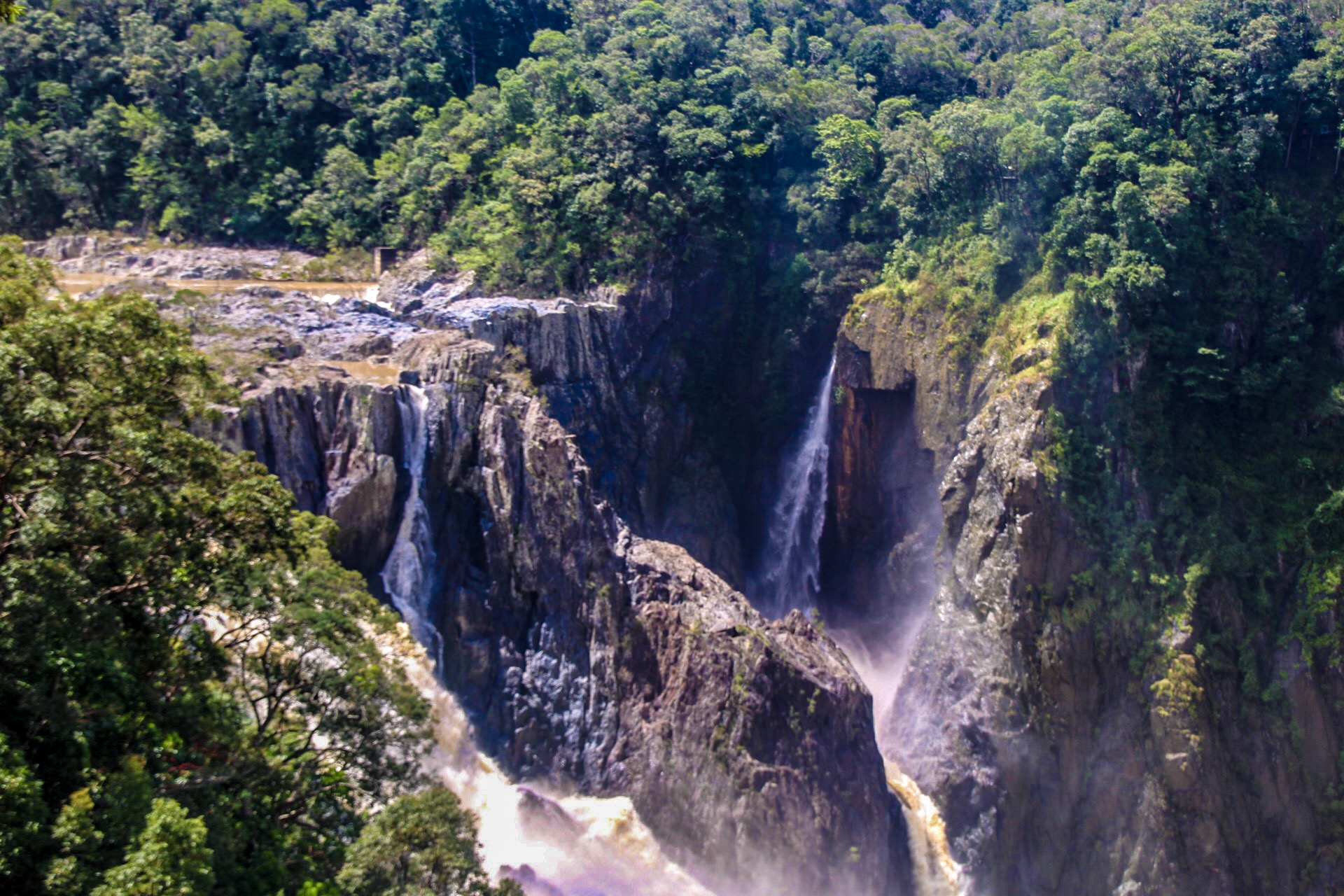 The Barron Falls In Full Force

A long scenic walkway leads to a spectacular lookout that’s sighted opposite Barron Falls and near to Kuranda. This is the rainforest, and it’s hot, sticky and sweaty at the driest of times, and barely tolerable after heavy rains.

I could hear the falls raging through the dense foliage ahead, and after sweating and toiling my way through the rainforest walk the trees parted way to reveal a cloud of mist below, and the raging torrent of water plummeting down Barron Falls.

I’ve seen a lot of water falls in my travels across the world, but none have struck me with as much awe as did Barron Falls.

The falls were furious, emptying thousands of gallons of water every second over the precipitous rock face that dropped sharply over a 100 metres downwards. The surrounding green forest was lush and verdant after the rain, offering a picturesque backdrop to this monstrous sight.

The full force of the rains that had hit Cairns and Far North Queensland hard just a few days before were on show here at Barron Falls.

It was a humbling place to stand, to watch the fury of the weather in this part of the world and the force that it’s capable of unleashing.

Barron Falls after the rain was the most powerful waterfall that I have ever seen. 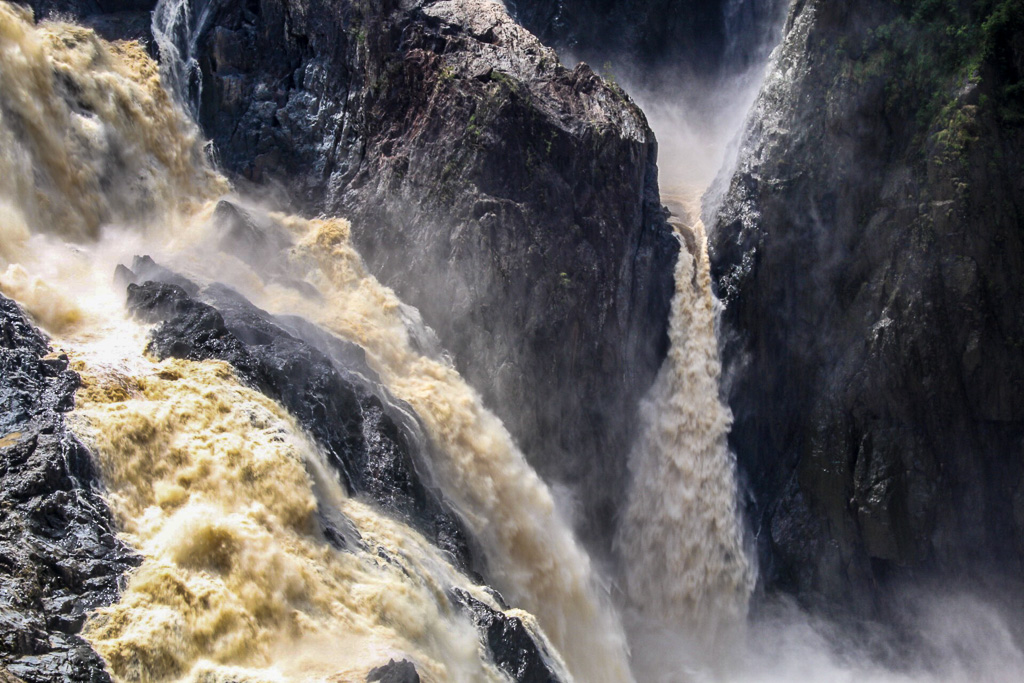 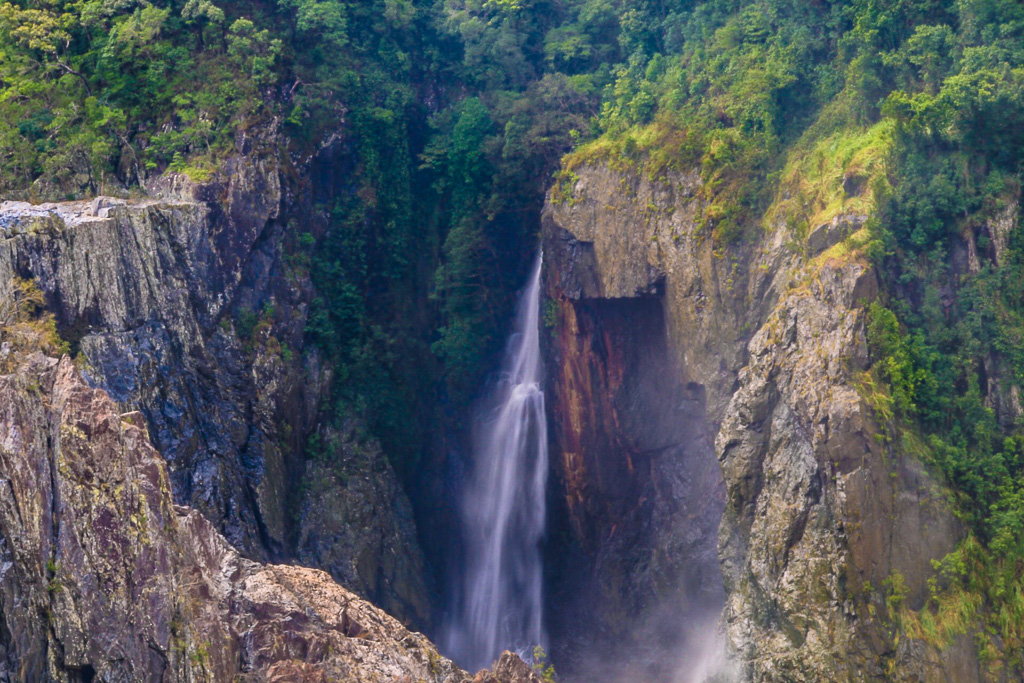 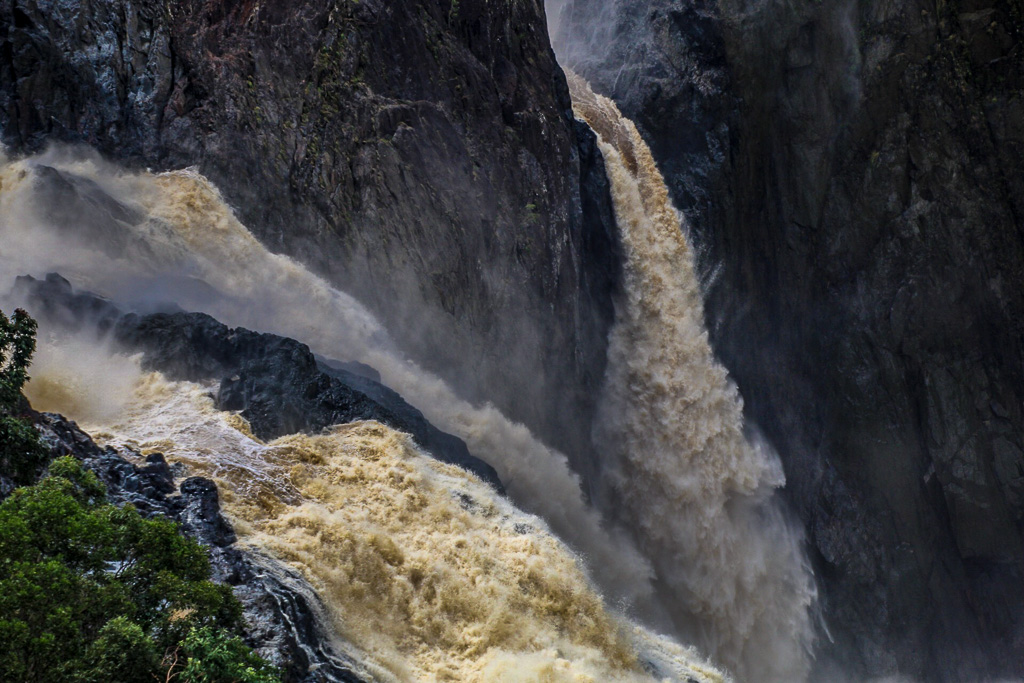 Travelling to Queensland? Sign up for Air BnB to book your accommodation using this link HERE and you’ll get £25 free credit towards your first booking!