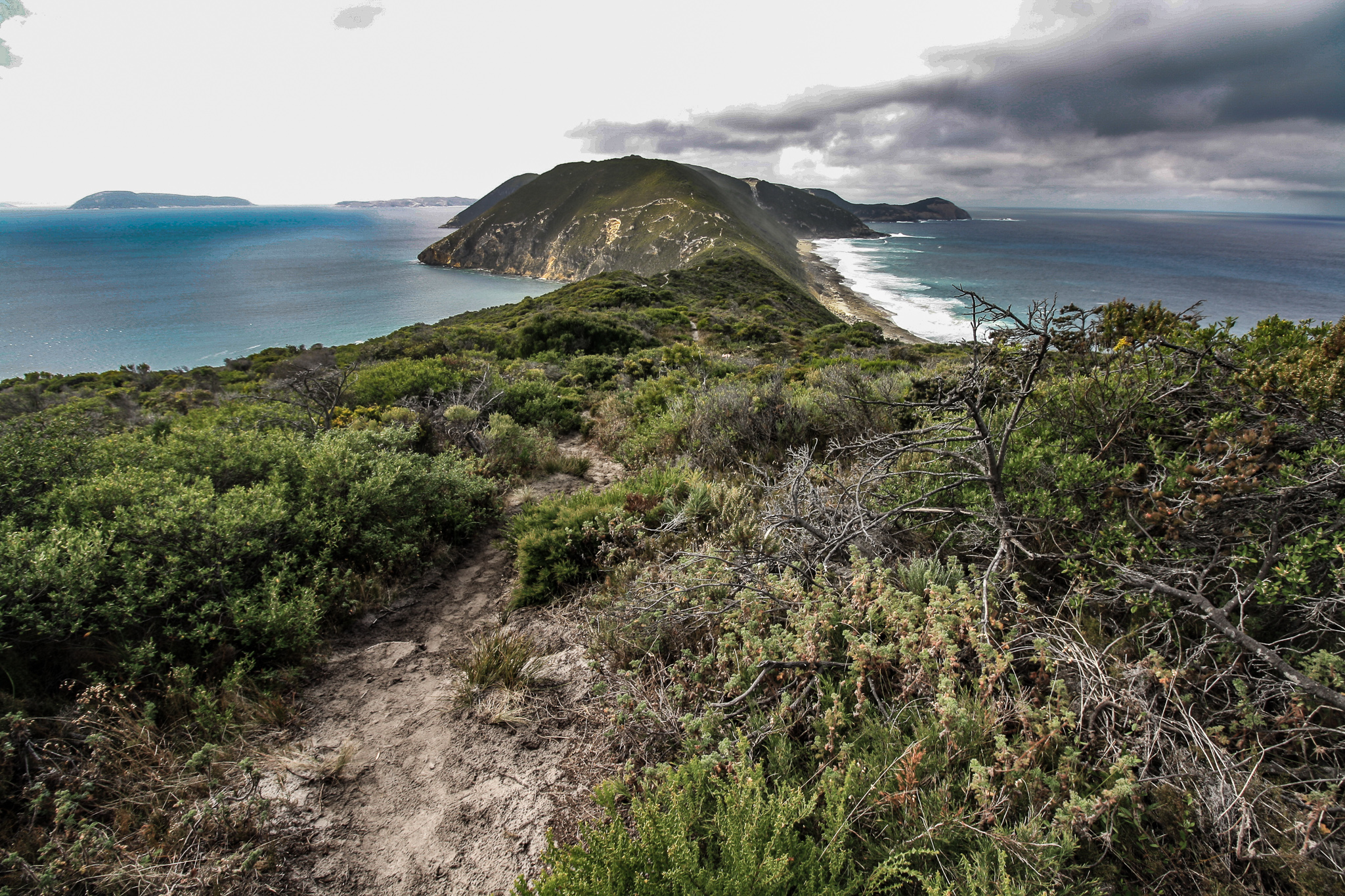 The mist was starting to roll in quickly as I trudged the last, rocky steps to the edge of the Bald Head Albany peninsula. I could hear the waves crashing powerfully below, while all along the coast to my left and right I could see the ocean pummelling violently into the rock far away onto the horizon.

This was not the Australia I was used to. I could feel the rain about to fall, the dark clouds were spreading over the landscape and despite the long hike I’d just made, I was starting to shiver on the exposed edge of rock I was resting on before making the return journey.

The hike along the Bald Head peninsular by the south coast city of Albany in Western Australia was rugged, wild and unlike anywhere else I’d see in the country.

This was the Bald Head Hike, the toughest hike in Albany, and I’d made it to the end. I still had to get back though, and the weather was beginning to turn for the worse… 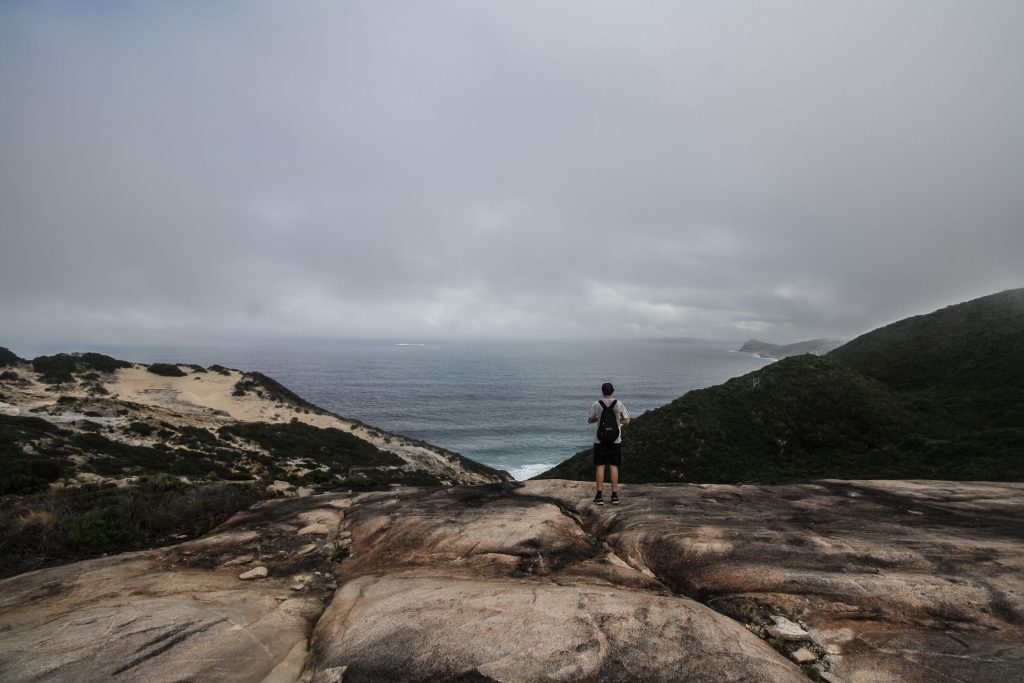 The Stormy End of the Bald Head Hiking Trail

The Hike To Bald Head Albany

I was in Albany, the historic, coastal city in the south west of WA, a place known for its stunning coastline, beautiful beaches and colourful bays. I had explored the white sands and I had swum in the turquoise waters along the length of the South West, from Perth down to Albany. Now I was looking for a challenge to take on.

Just outside of Albany can be found the wild coastline of Torndirrup National Park, a windswept land where the ocean perpetually carves the rocks it crashes into. Here you can find some of Albany’s most famous tourist attractions. It’s the site of The Gap, a rocky stretch of coast that’s been cut in two by the ocean swells over centuries, and it’s where The Natural Bridge, an arch hollowed out over millennia, can be found.

These sights gave me a taste of what this stormy land can be like, but still, I wanted to see more. At the far southern end of Torndirrup National Park is the Flinders Peninsula, an outcrop of land that stretches out into the southern ocean. This was as remote and wild as it got in these parts, and in March as winter loomed it was stormy and windy. It was proving to be a far cry from the long sandy beaches and perpetual sunshine Australia is famous for. 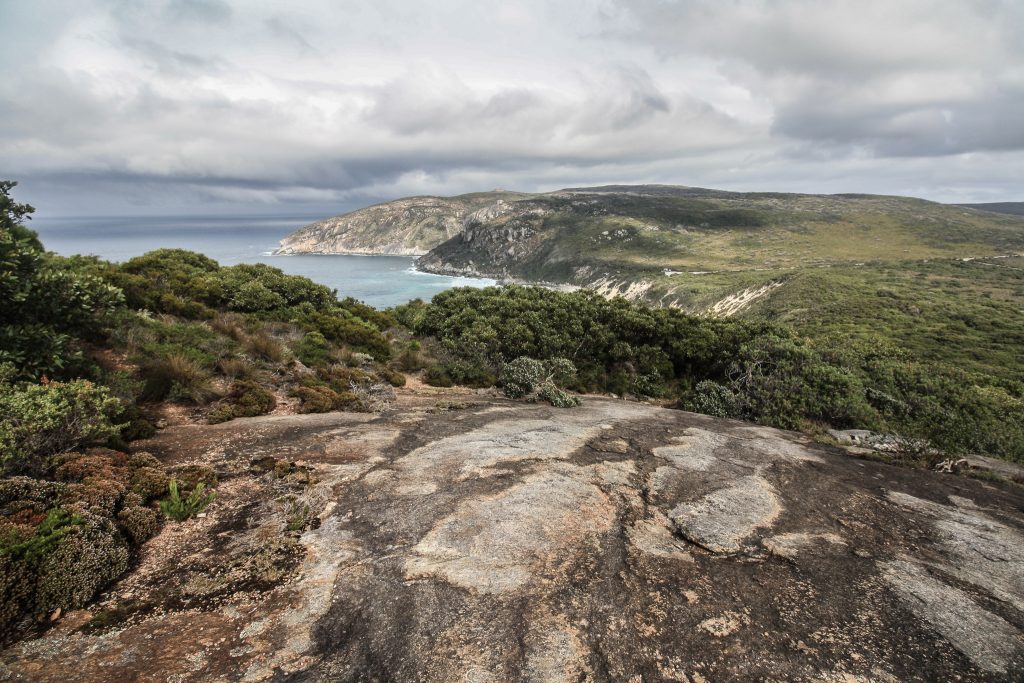 The Coastline of Albany

The Bald Head Hiking Trail follows the ridgeline of the prominent Flinders Peninsular which stretches out for over 6 kilometres from the mainland. It’s a narrow, long peninsula. The ridge is rocky, the paths are up and down and the only way back is along the same route that must be traversed to get to the end.

It’s nicknamed ‘Bald Head’ because of the barren rock that awaits hikers at the end of the walk. It resembles a bald head and it’s an exposed and dangerous point to be on in bad weather. In high winds and storms, the trail is closed, it’s that dangerous to hikers.

Needless to say, the Bald Head trail in Albany is classified as a class 4 by the Rangers. That’s one of the most challenging grades that can be attempted in Western Australia without guides and specialist equipment. From the car park at the beginning of the Flinder’s Peninsular, the trail crosses 6 kilometres of undulating rock, cliffs and even sand to reach the Bald Head, and then it’s another 6 kilometres back again. The recommended time needed to complete this walk is between 5 and 7 hours. At that sort of pace, the average walking speed at best is about 2.5 kilometres. That’s slow, and I knew that meant it was going to be tough going. The gentle, rising boardwalks I was following led through thick vegetation towards the peninsula from the car park in the national park. I was prepared for a long hike, but I was still wondering how tough it could really be. Distance wise, 12 kilometres isn’t huge, certainly not for a full day hike, and the rest of Australia I’d seen was, well, just soft sand and straight roads.

I’d been given a glimpse of the ruggedness though of this part of Australia at the sights I’d already visited in Tornidrrup, and I had packed the waterproof coat even though the sun was shining. I had plenty of water and a solid pair of walking boots on. Still, I was confident it would be simple enough, for starters, I couldn’t get lost. There was only one way there and back.

The boardwalk turned into steps that rose sharply and brought me out onto the peninsula. This was where the trail really began, and ahead of me was arrayed a beautiful scene, as the Bald Head at the far end of the peninsular awaited me. The rocks were punctuated with green vegetation and small trees, but towards the end, there was nothing but rock.

Taking the incredible vista in my stride, I began striding purposefully towards my end goal. 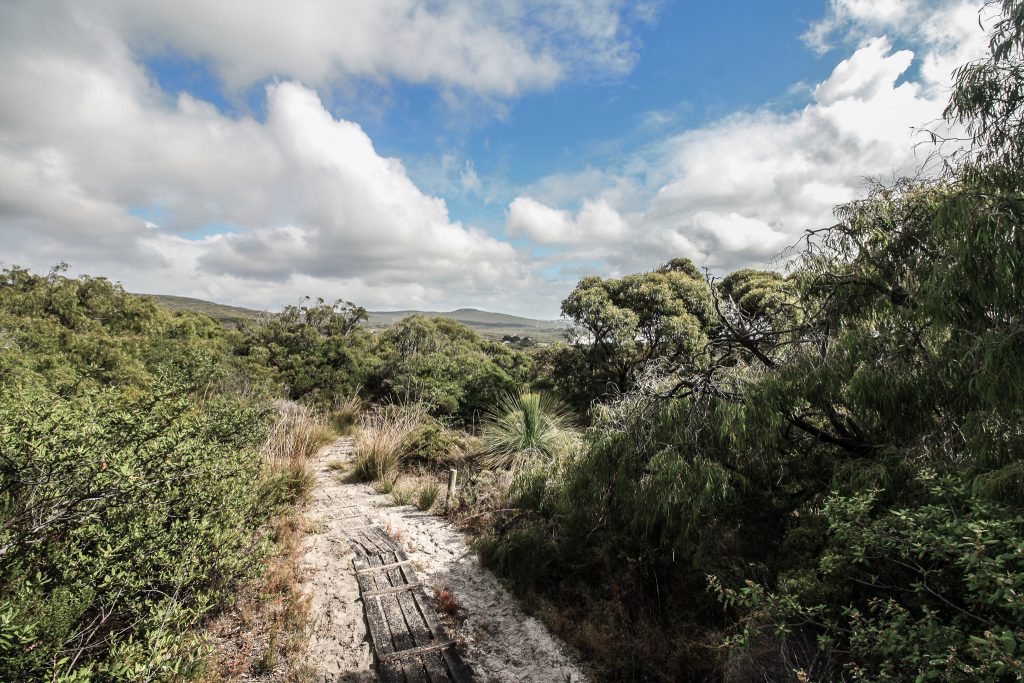 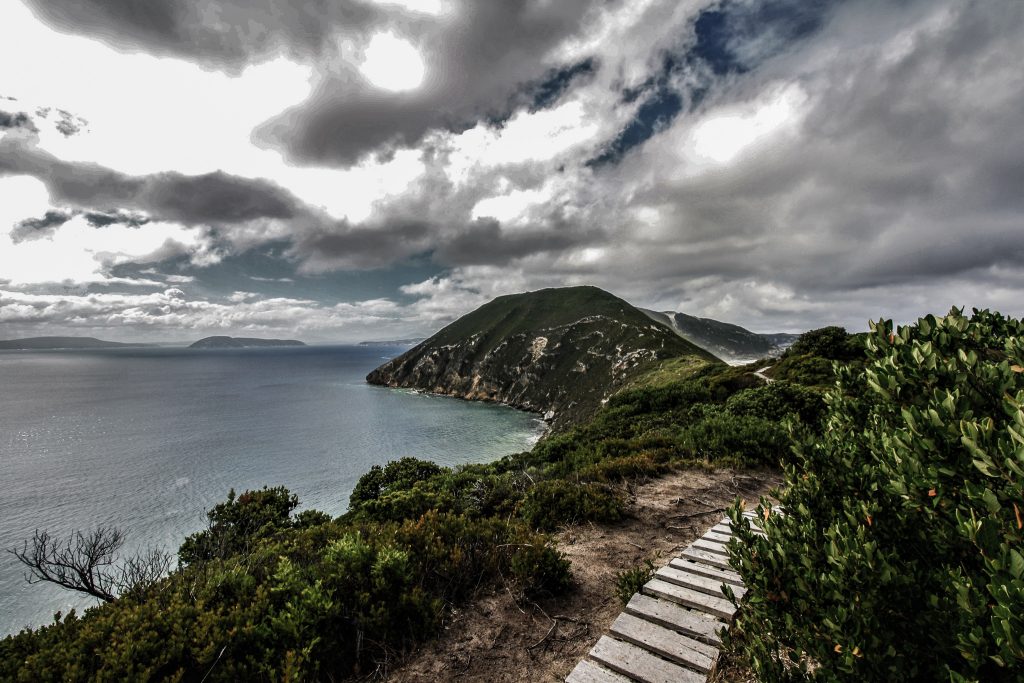 The Going Gets Tough

The walk was light, and only gently undulating to begin with. A distance marker told me it was only 5 kilometres to the end. Already, I’d smashed through that first kilometre, I naively thought. The trail wound its way through the trees and then began to work its way along the cliffs. Out to sea, I could the waves forming before they smashed into the rocks below and smashed into the cliffs that I could see stretching far along the coast to the side, and now behind me.

I was walking uphill, and no longer could I see the Bald Head at the end of the trail. The horizon was obscured by the peninsula as I walked on, and after appearing on the first hilltop I could see ahead of me what I thought, already must be the end of the trail, but surely I hadn’t hiked it that quickly?

Feeling overconfident I quickened the pace, and struggled along the increasingly rocky path, first down, then up and emerged again at the top what was just a false peak. Bald Head head already deceived me.

Now from my vantage point, I could really see the end of the peninsula, and I could see the wind was blowing mist and rain all over it. From here I had to hike downhill again, but the trail quickly turned into a scramble of mud, rock and sand as I scrambled and fell down to the bottom of the short valley between the two peaks, knowing full well that soon enough I’d be climbing back up this steep ravine on the return leg.

Here there was nothing but sand to walk through. Ther were strange dunes sandwiched between the rock where nothing much grew and very little could survive. This was an inhospitable piece of land, ravaged by salt spray and beaten by gales.

Still, I trudged on through. The going was really getting tough now. I’d exhausted myself attempting to reach the false summit and now I had another uphill battle to win to reach the real Bald Head. 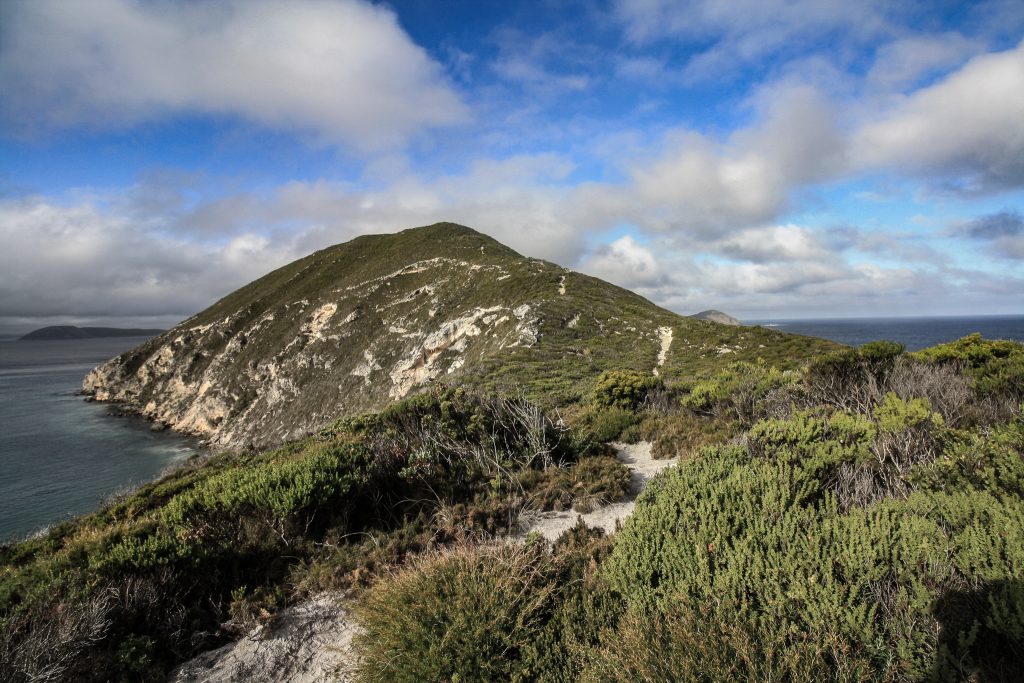 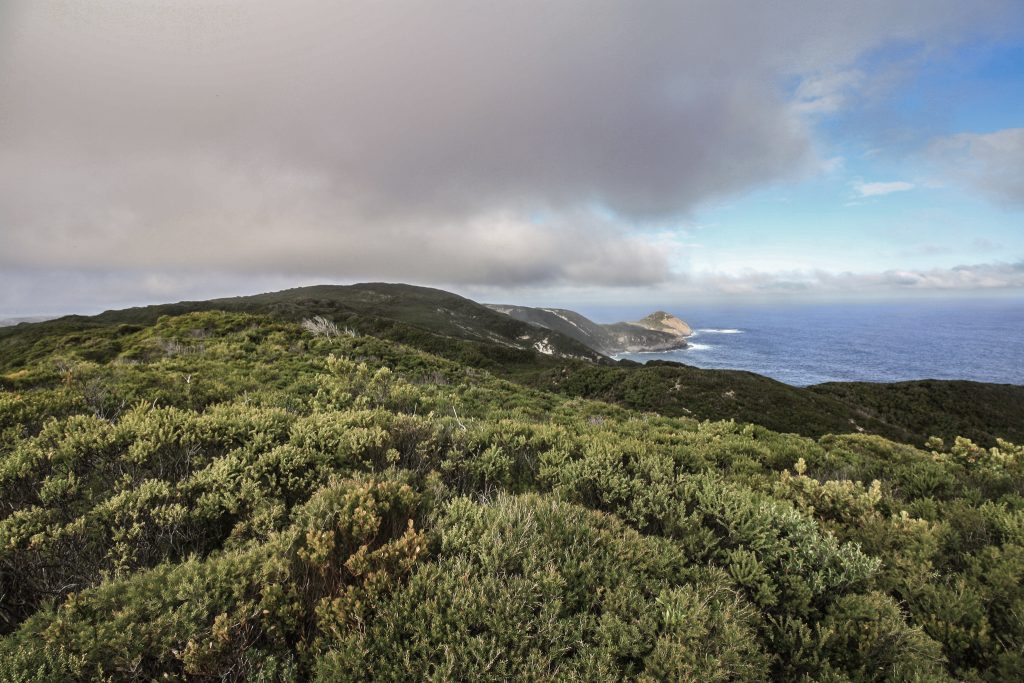 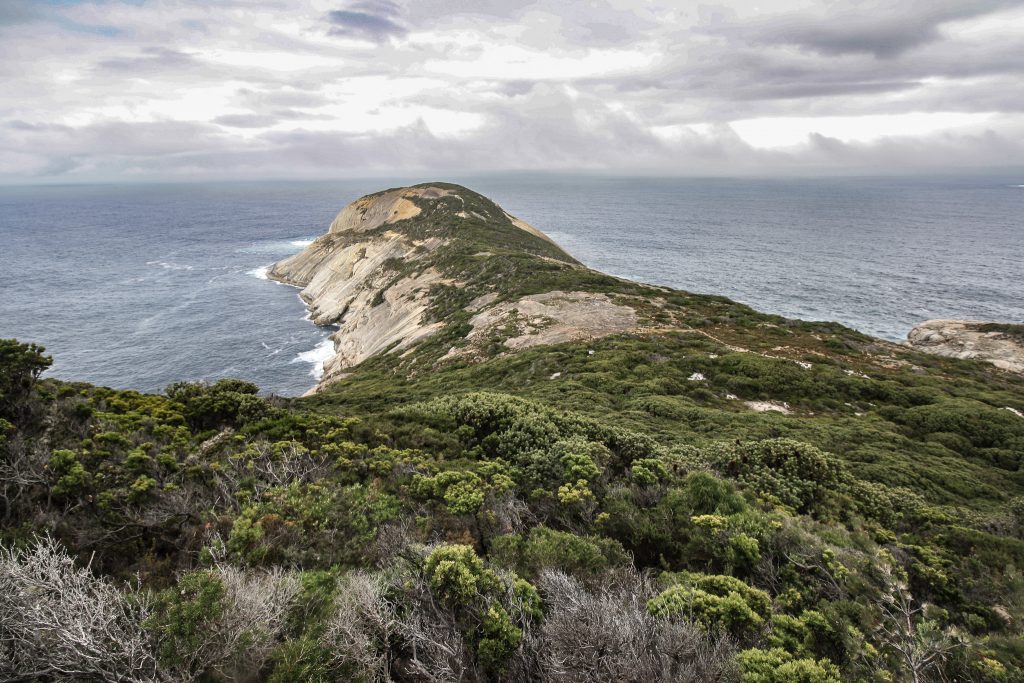 The wind had blown the mist and rain away from the Bald Head as I started the last stretch of trail. after a steep ascent, the small trees around me disappeared and were replaced by rock. This was the last piece of the ridgeline to traverse, and I could even see a huge cairn just a few hundred metres away.

Within minutes I’d reached the Bald Head, and amongst the vast pile of stones piled high as a marker, I found a battered, plastic box containing a log book. I signed my name on the page and from the blank pages realised how few people make this hike, at least in comparison to the number of people I’d seen visiting the other, more accessible parts of Torndirrup National Park. 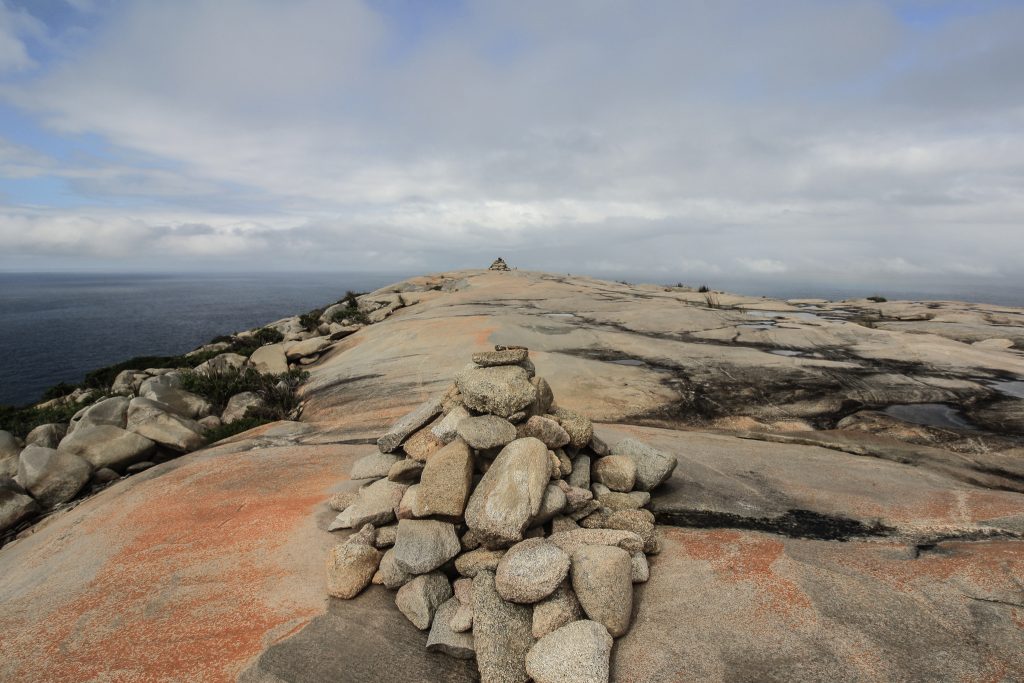 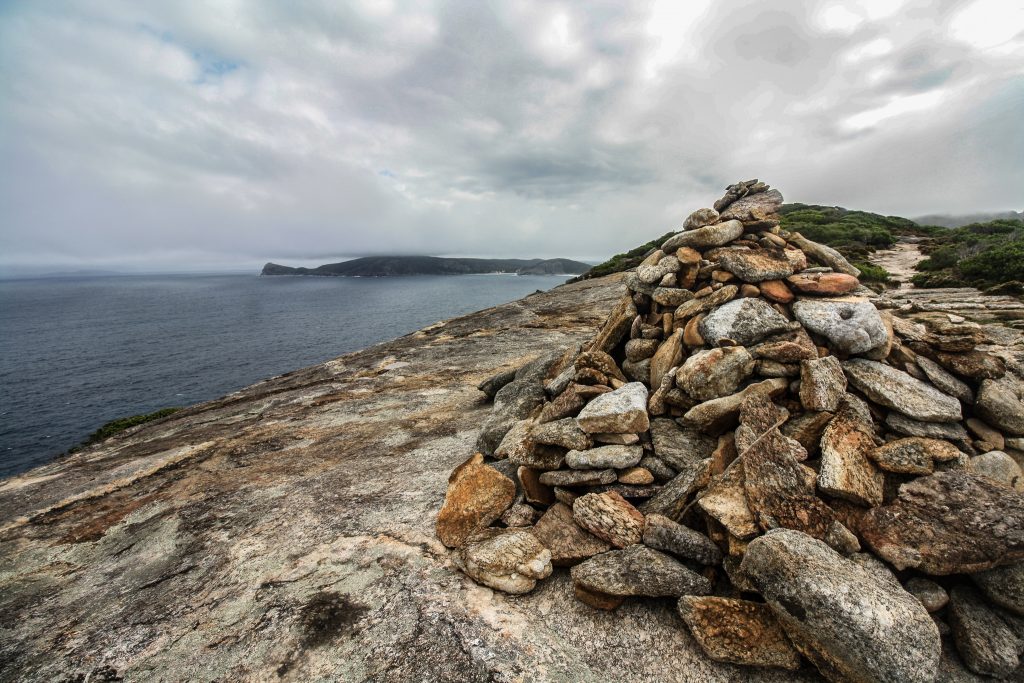 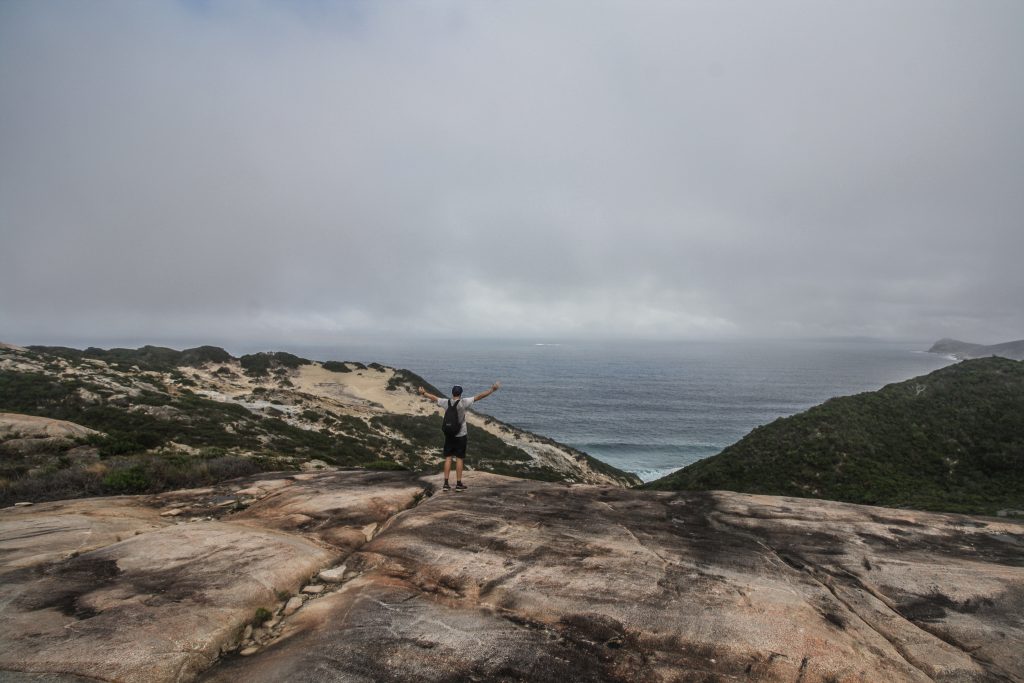 The Weather Turns For The Worse

The mist was blowing across the trail behind me, and I could see storm clouds forming further along the coast. As challenging as the terrain here was, the weather too was just as unpredictable. I could understand the warnings I’d read at the start now, and as the clouds blackened I hoped the wind would blow them away from the peninsula as I raced back the way I’d just walked, wanting to get along the narrow ridge before a fierce gust could sweep me over the cliffs.

I’d donned my waterproof coat for this return race and I could feel the wind picking up as I retraced my steps across the sand, and then followed the ridge to the false peak that had wanted to break me once already.  This was the worst of the trail and I was now beating the weather. Once I’d reached the false summit again, I slowed the pace and made my way back along the path, following the cliffs and through the trees, until I reached the end of the trail.

I turned around to take one last look at the fearsome trail I’d just hiked. I could see the Bald Head far off in the distance, and I could trace the route I’d just followed. Storm clouds were now firmly over the far end of the peninsula, but ultimately I’d made it back without issue, and just a strong breeze to counter.

This was the toughest hike I’d attempted along the southern coastline of Western Australia. The scenery and the weather around Albany at this time of year was more like a stormy Atlantic coastline than the sunny Australian landscapes I’d been used to this far.

The estimations for the length of the walk were spot on. I’d taken 6 hours there and back again. I was exhausted too. The Flinders Peninsular is an inhospitable, wild and rugged place, but for those very reasons, it’s one of the most spectacular, if windswept places to hike in Albany

The Bald Head walking trail is a tough hike to complete. A good level of fitness needed, and be wary of the weather. The start point is in the car park by the Flinders Peninsular, where there is a signboard with more information. You will need to technically pay a $12 park entrance fee. Be prepared with plenty of water and snacks, and wear suitable clothing and boots. The weather can turn rapidly in winter, but in summer the heat will be the main problem. Take sunscreen! No maps are needed and the trail is fairly well amrked with cairns.

The start of the walking trail is found by the car park on the map below: 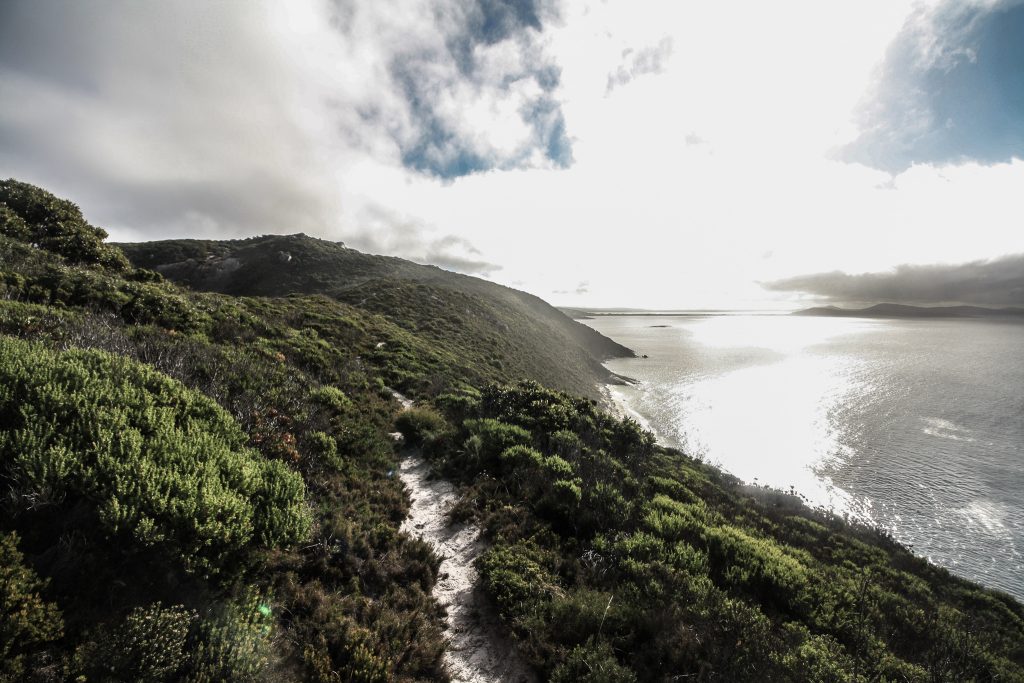 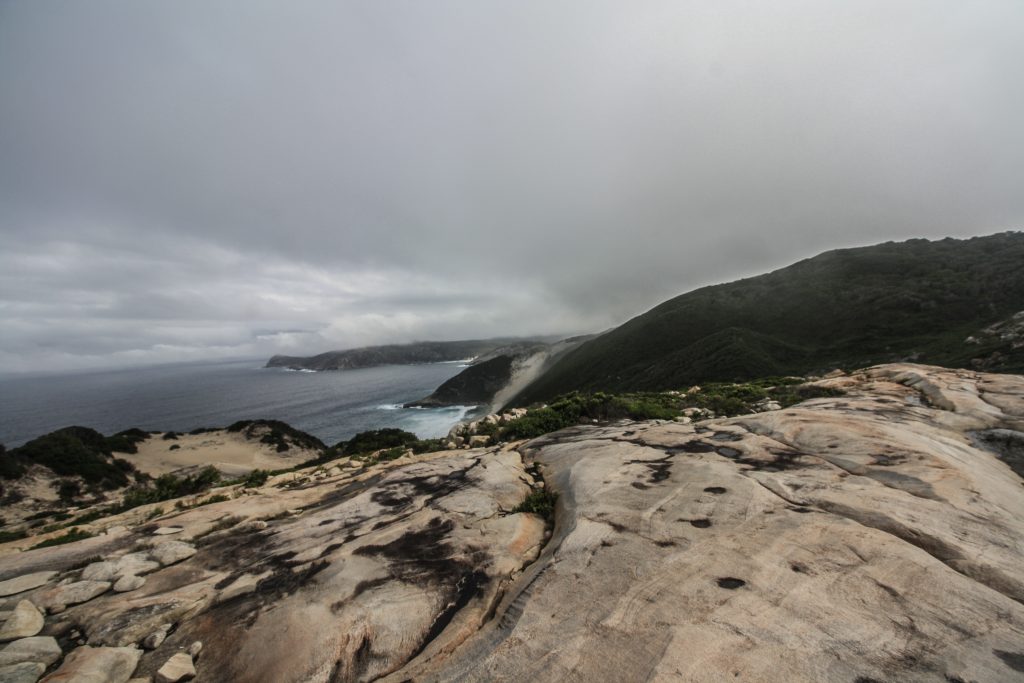 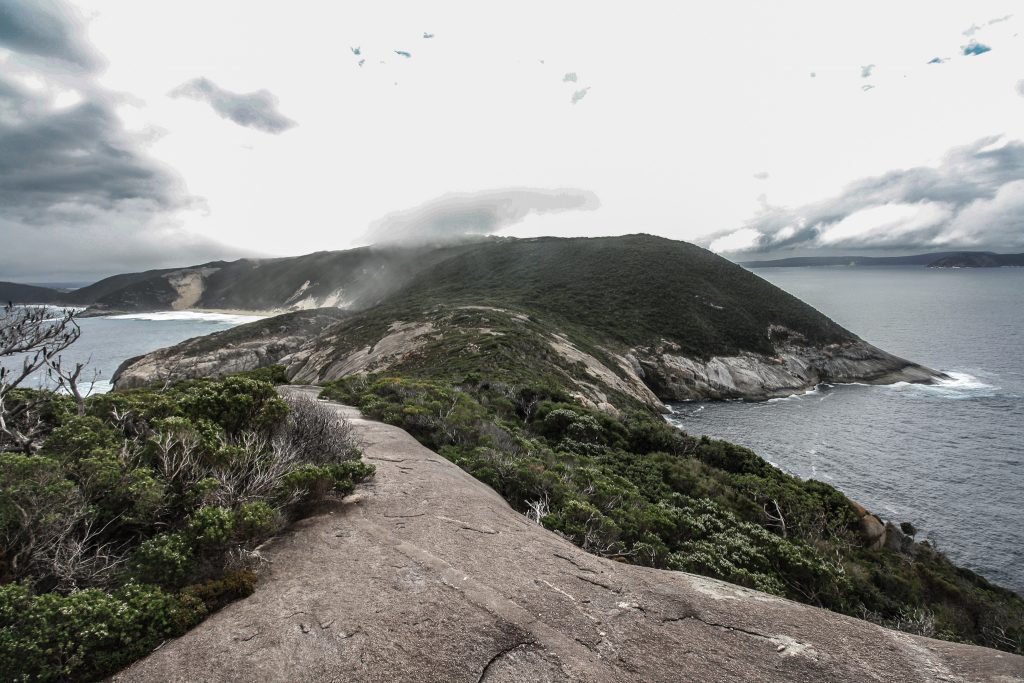 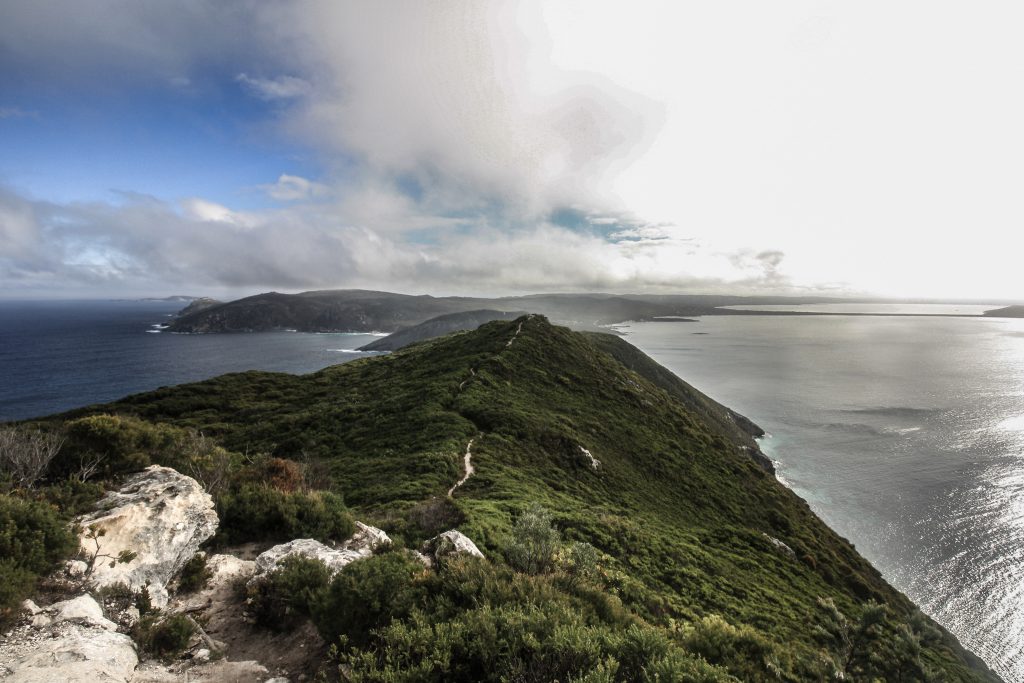 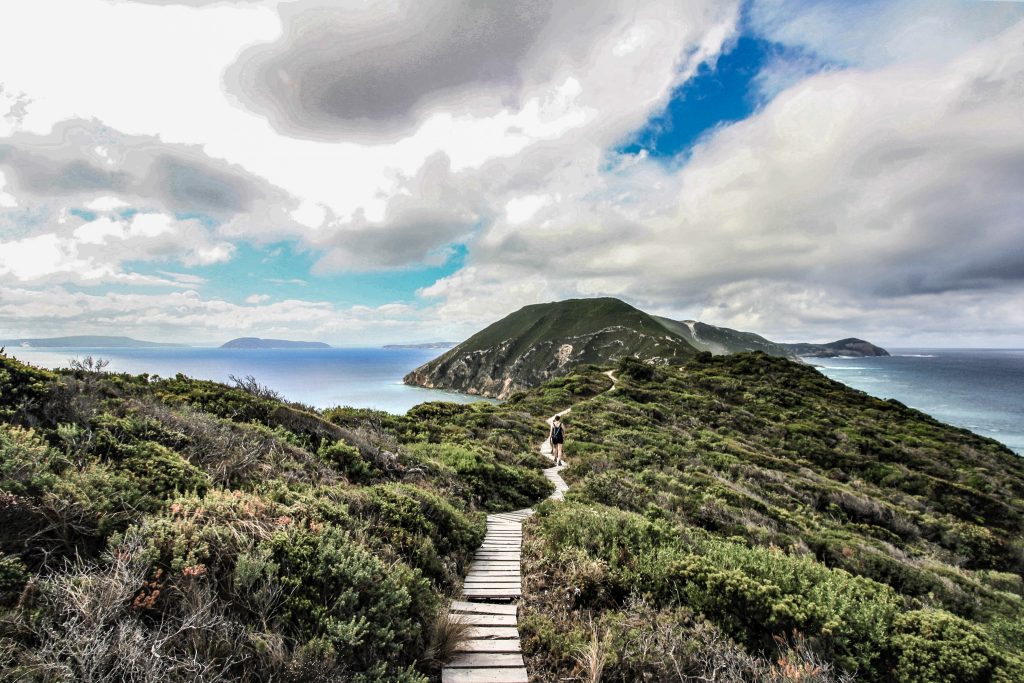