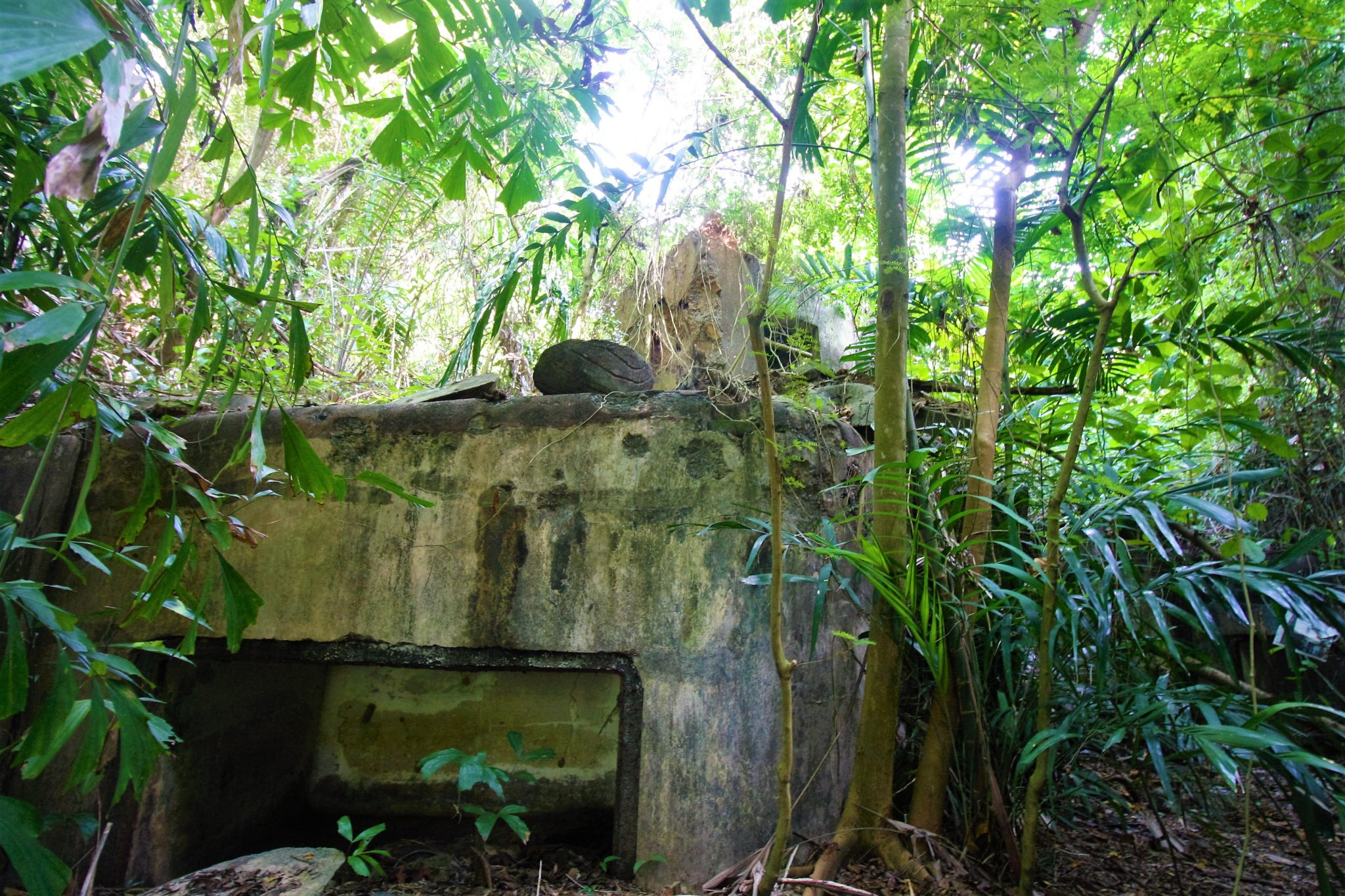 Sentosa Island is one massive theme park, home to Universal Studios, aquariums and Disneyesque attractions and shows. It’s a place for families and holidaymakers, with lavish hotels, golf courses, expensive cocktail bars and artificial beaches. It’s an island resort, but beneath the golden sands and neon lights lurks a darker history, old forts lost to the jungle, and an unexpected opportunity to uncover a part of Singapore’s history that has been built over and left ignored by the roller coaster riders and beach goers. 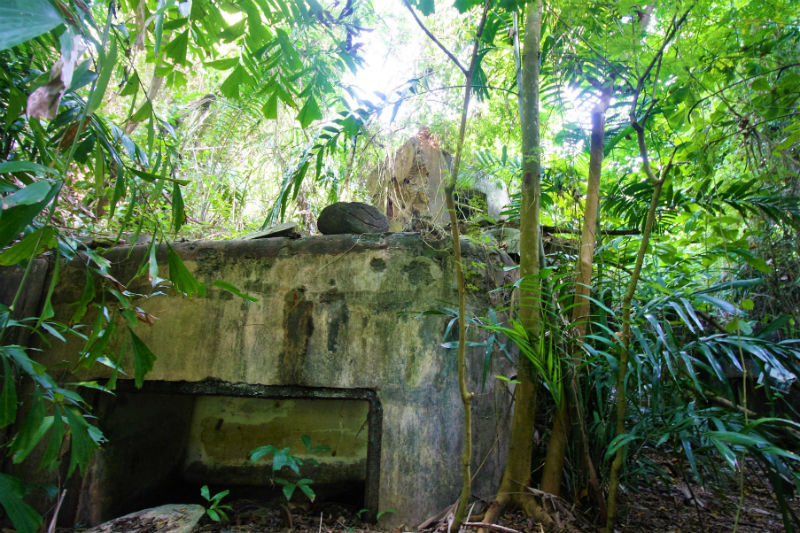 I wasn’t expecting to find much in the way of history or anything of interest to a dark tourist on Sentosa. This small island lies off the main part of Singapore, and these days is simply known as Singapore’s Disneyland. I wasn’t down to see any of the outrageous light shows or to play an expensive round of golf, but after getting into contact with Singapore’s Urban Explorers while in search of a few abandoned colonial buildings to explore in the country, I realised that there is much more lurking under the resorts of Sentosa and hidden in the jungle than is advertised in the holiday brochures. 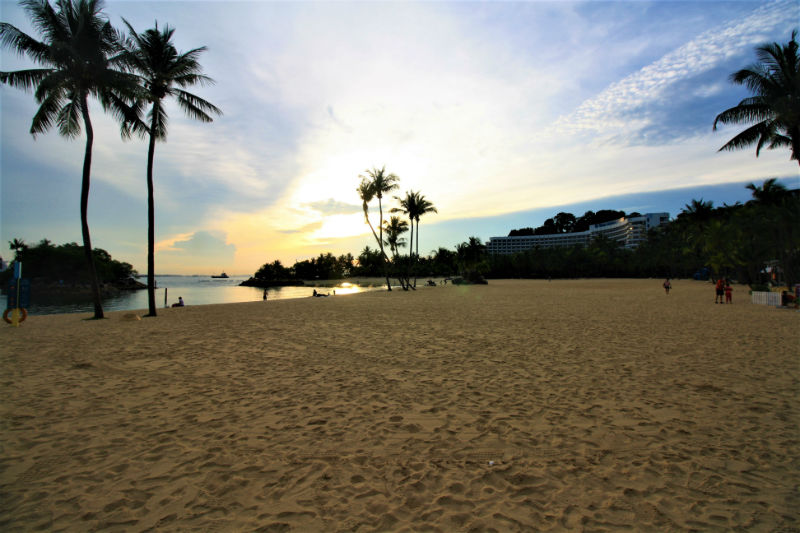 Sentosa translates from the Malay language as ‘Peace and Tranquillity’. An apt name for an island that sells itself as a glamorous holiday retreat. But this name is as artificial as the beaches. Before the investors pumped in the money, Sentosa was known to locals as Pulau Blakang Mati, a name which loosely means The Island of the Dead.

Singapore was a swampy, malarial infested island when Sir Stamford Raffles and the British arrived in 1819. It’s strategic location however led it to develop quickly into an integral colony of the British Empire, in prime position to defend the shipping lanes and trade routes of South East Asia. And the colony quickly boomed.

But the island that would eventually become Sentosa remained undeveloped, a place where death lurked and the jungle claimed all. With Singapore growing in stature and importance as a Crown Colony of the British Empire, in the 1870’s it was decided to make use of this Island of the Dead to defend the Singapore Straits and to help transform the city into an impregnable fortress.

The British began constructing coastal forts to defend against any aggression and invaders from the sea, and Sentosa island was in the perfect geographical position to sight guns and artillery to protect Singapore. Rather than riding the roller coasters, this is what I wanted to find on Sentosa, the remains of the colonial past.

I took the Sentosa Express across from the main island, and it thundered past high rise hotels and fancy resorts, weaving through what little remained of the once overpowering jungle and then finally onto the golden beaches which face out onto the shipping lanes of the Strait of Singapore. During the days of British rule this was where any attack from Singapore was expected, from the sea. 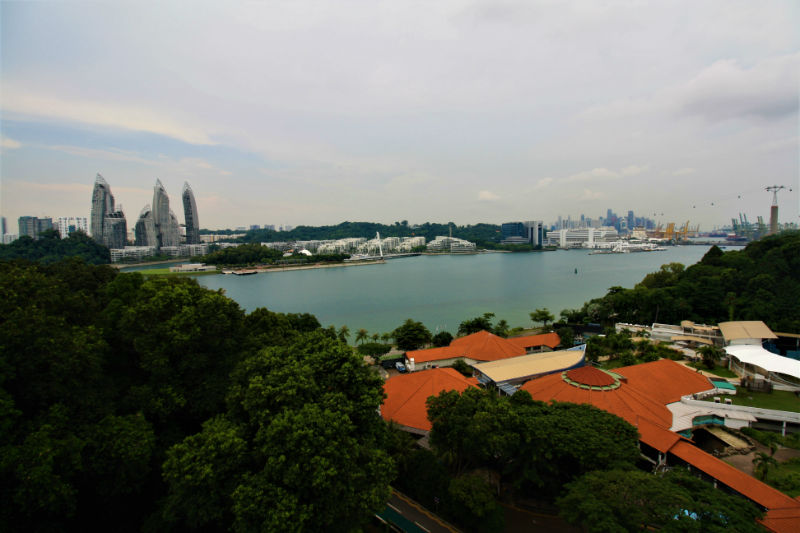 Four forts were eventually constructed on Sentosa, Forts Siloso, Serapong, Imbiah and Connaught. Fort Serapong has been transformed into a museum in recent years, while Fort Serapong and Imbiah Battery have been left in ruins in the jungle. Fort Connaught was completely razed to make way for a golf course.

I started my journey into Sentosa’s colonial history by visiting Fort Siloso. This artillery battery was built on top of the imposing Mount Siloso, on the far edge of the island, looking directly across to the city itself. The Fort was built in the 1870’s and upgraded in the 1930’s when fears of Japanese aggression began to be realised across the colony. Today, amongst the theme parks and hotels, Fort Siloso alone has been turned into a museum and restored. A small part of history on Singapore’s Disney island. 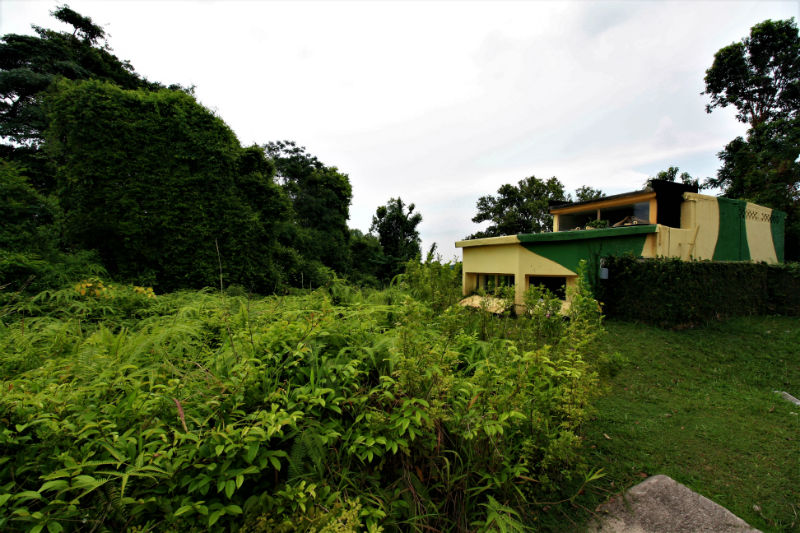 A sky walk leads through the trees and to the top of Mount Siloso, giving far sighted views across to Singapore and across Sentosa before it reaches the old bunkers and batteries that were built to defend the colony. 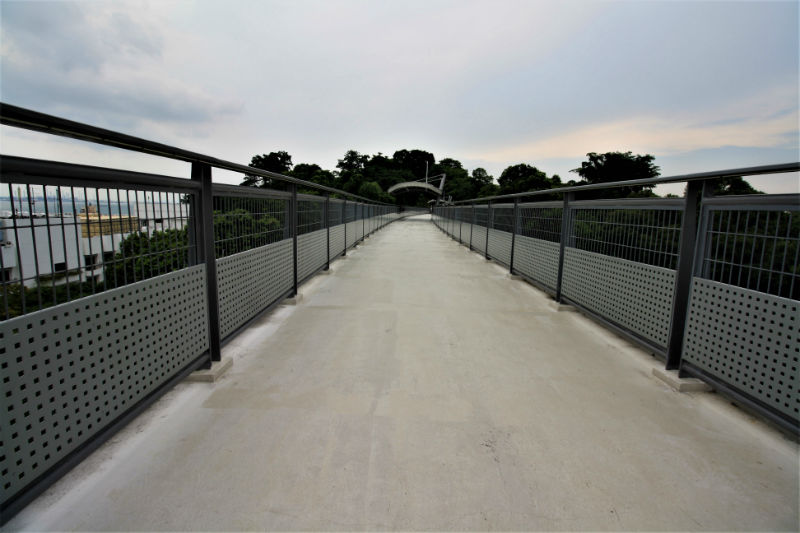 The forts never fired a shot in anger until World War II, when the time came for Singapore to be defended against the Japanese in 1942. But the attack never came from the sea as the British had envisaged. The Japanese invaded from the north, through British Malaya, and the guns of Siloso had to be turned to face Singapore. 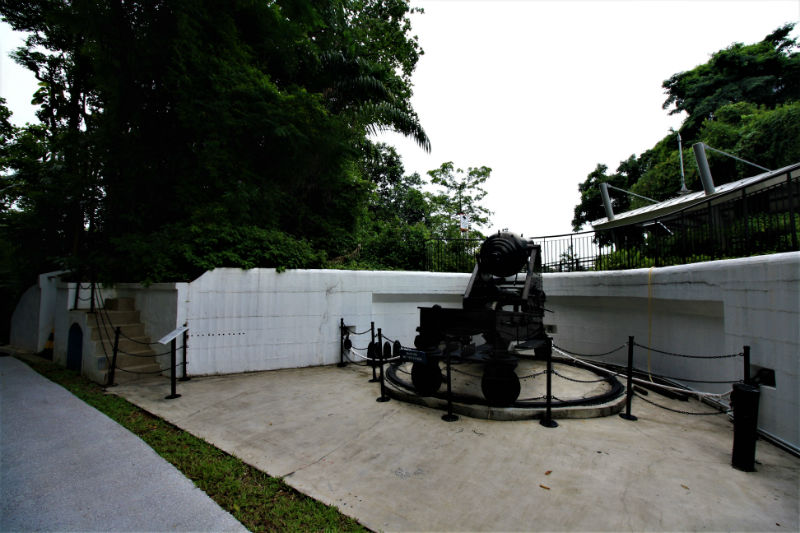 The fort’s guns fired on approaching Japanese troops, but being prepared for Naval defence, the ammunition available was unsuited to defend against a land invasion. Fortress Singapore fell quickly to the Japanese, surrendering the colony to occupation and marking the beginning of the end of the British Empire itself. The loss, and the inability of the British to protect their colonies and the people that lived there caused irreversible change. 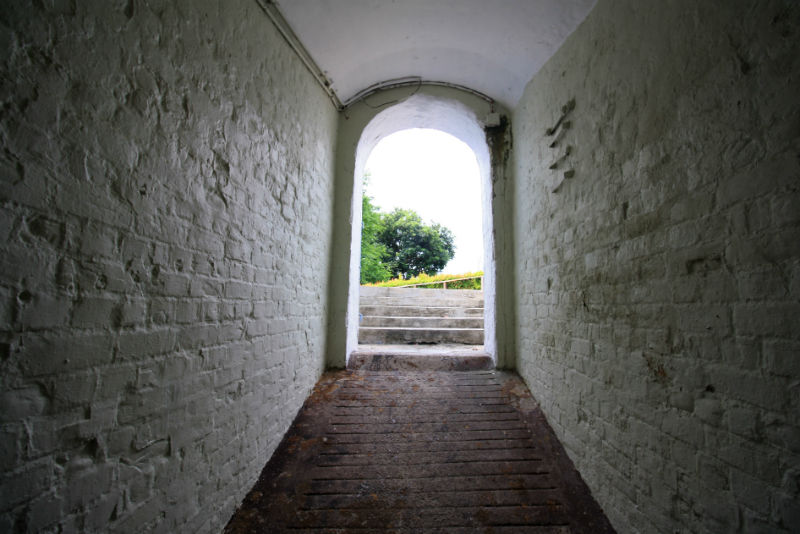 The Japanese occupation turned Sentosa into an island of death. Fort Siloso became a Prisoner of War camp for captured soldiers, while the beaches became the killing ground of thousands of Chinese inhabitants of Singapore who were accused of being anti-Japanese. The brutal, dark times of World War II, and the massacres which were perpetrated on Sentosa, and across the colony, would ultimately lead to Singaporean demands for independence once the Japanese were defeated in 1945. 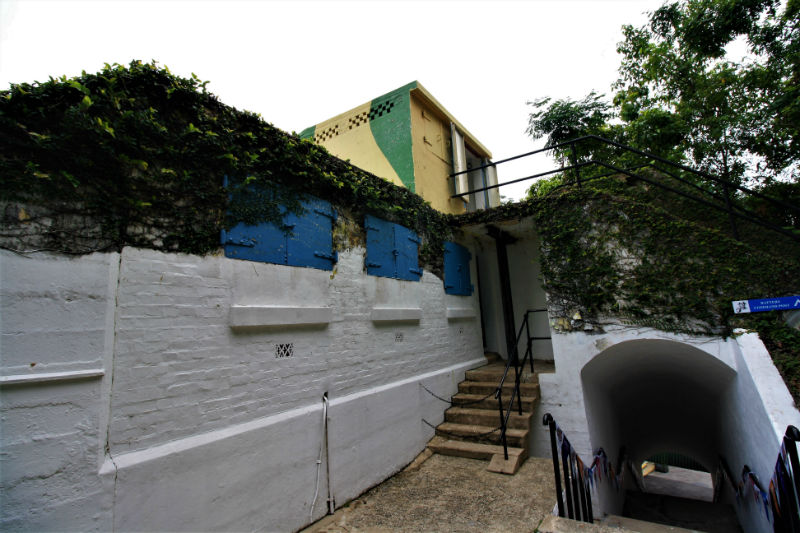 Inland from Fort Siloso and sighted on an opposing hill top are the ruins of the Imbiah Battery. These guns also faced out to sea and formed an important part of the defensive plan for Singapore, but again found themselves useless in the face of the Japanese onslaught during World War II.

A steep uphill trail leads through the jungle that still remains after the island’s development and to the top of Mount Imbiah where the remains of the gun emplacements look out over the beaches. 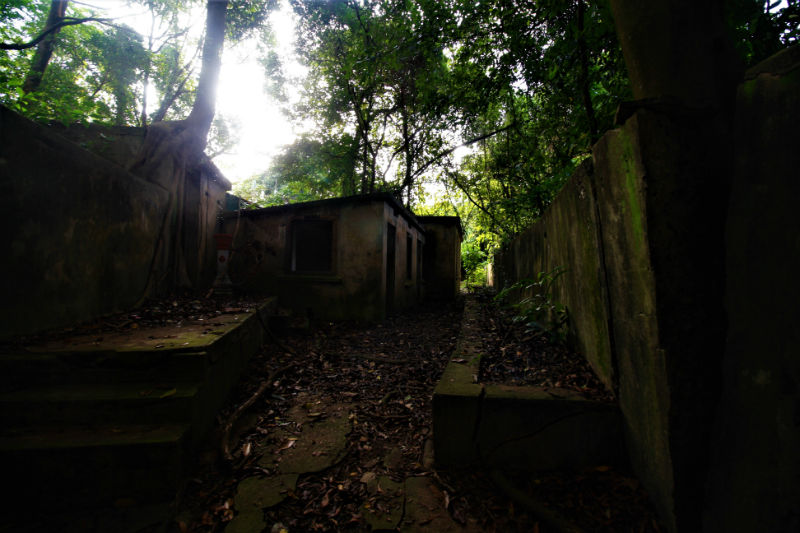 The battery was home to soldiers and artillerymen but after World War II fell into disuse. 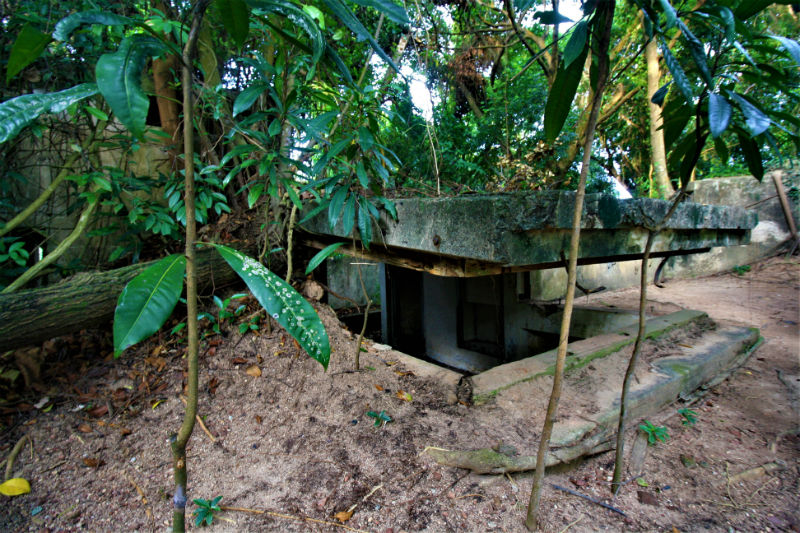 The jungle is now sweeping through the old concrete bunkers and gun emplacements, a stark contrast to the pristine hotels and rides that have been built below on the island. 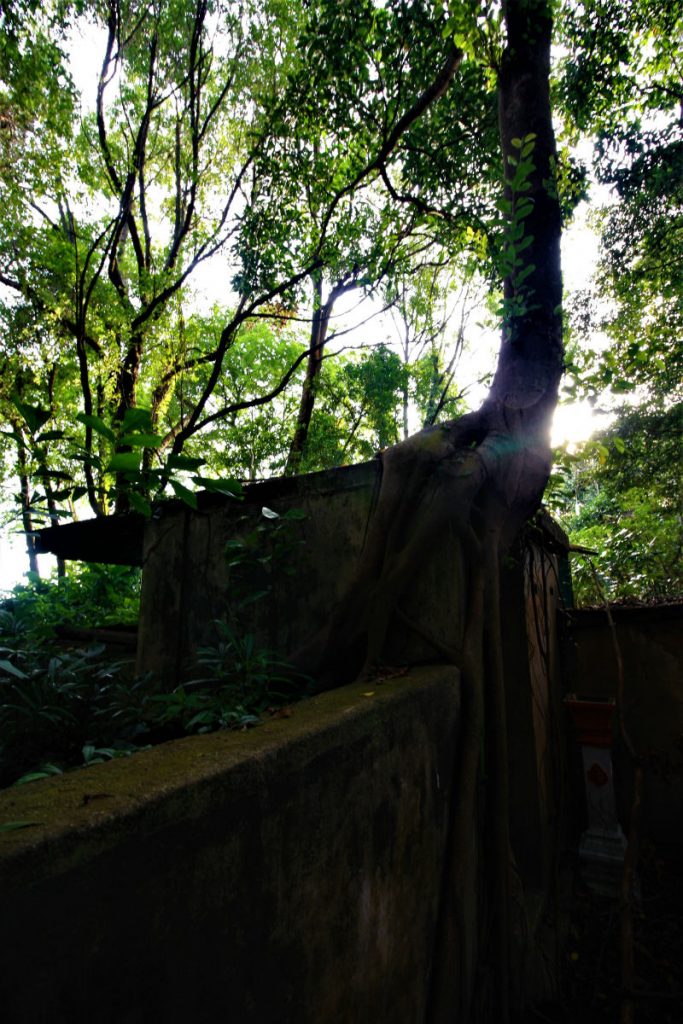 I could walk through the ruins, but the vines and trees are slowly overcoming the concrete structures. 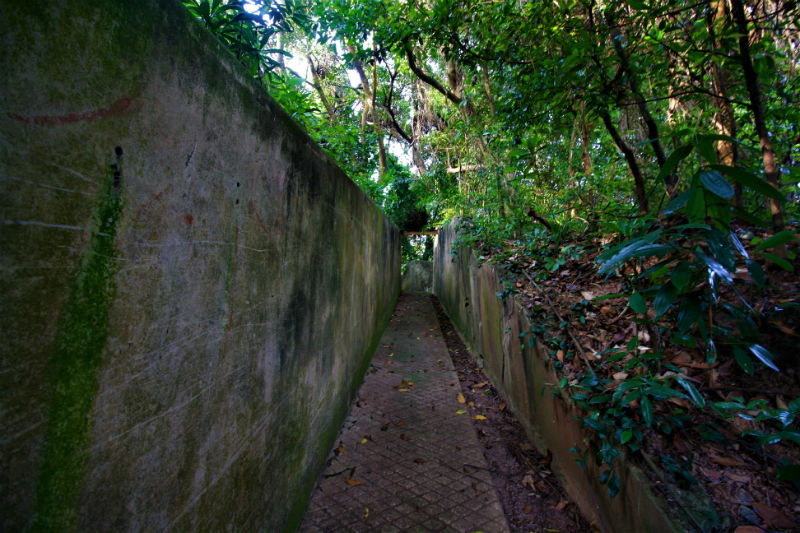 Avoiding spiders and the odd fearsome rustling in the undergrowth I headed back down to the strange civilisation of the resort world, and began my search for the final fort on Sentosa, Fort Serapong. This would prove to be the most ruinous and over run of the old colonial fortifications. 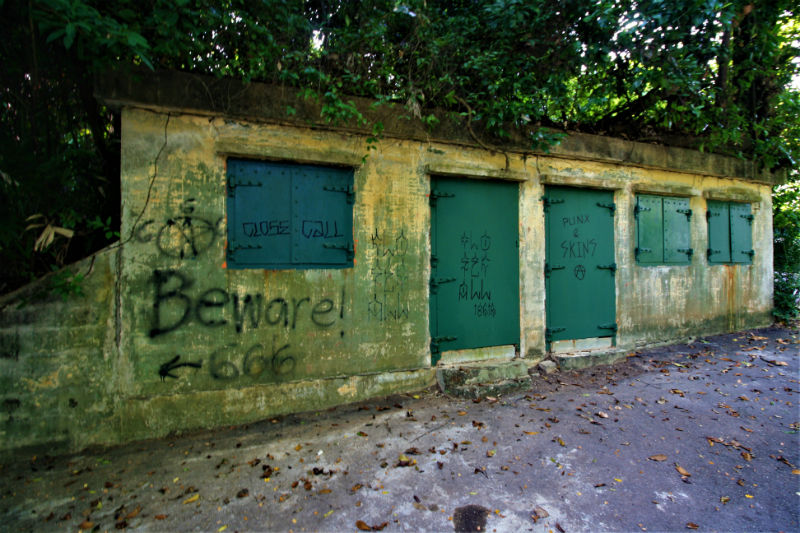 Fort Serapong was the most difficult to track down. On the far side of the island, a small road with a no entry warning led up a steep hill,. As I walked upwards I was met by an old concrete building with the ominous graffiti ‘Beware!’ plastered across it. 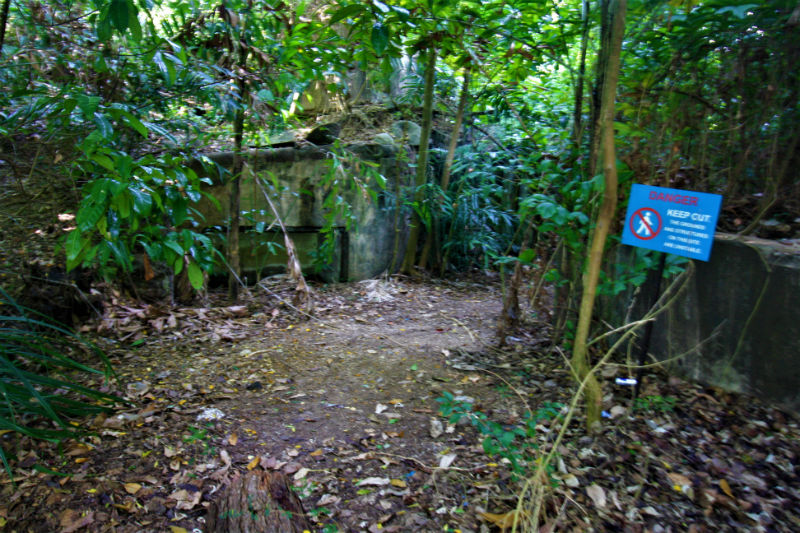 This was the entrance to the fort, or what was left of it. Overgrown bunkers faced out onto the road, and an official looking warning sign told any would be explorers to Keep Out. This was the real deal. 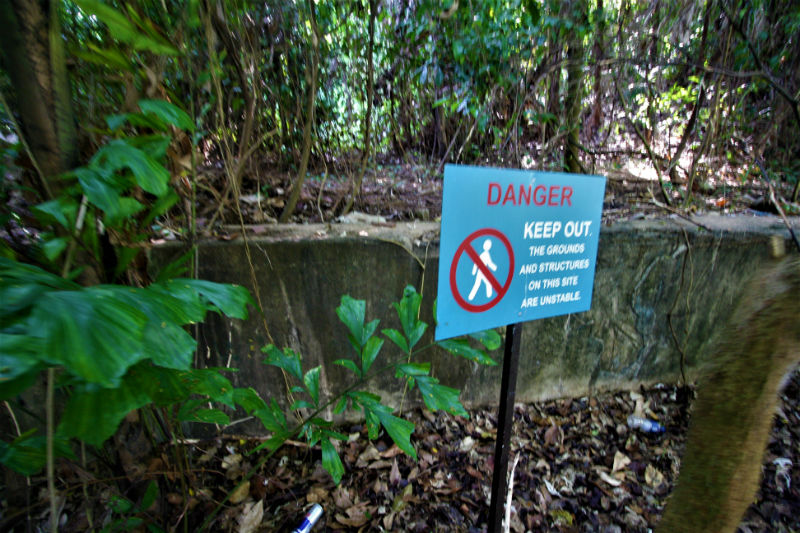 The warning was warranted. The grounds and structures on the site truly were unstable. 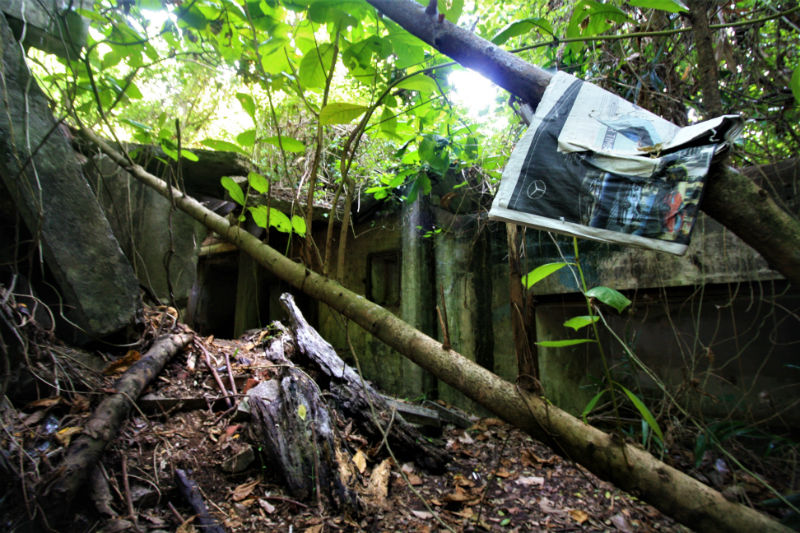 I ventured further into the old fort, sweeping aside vines and looking warily at the collapsing concrete surrounding me. 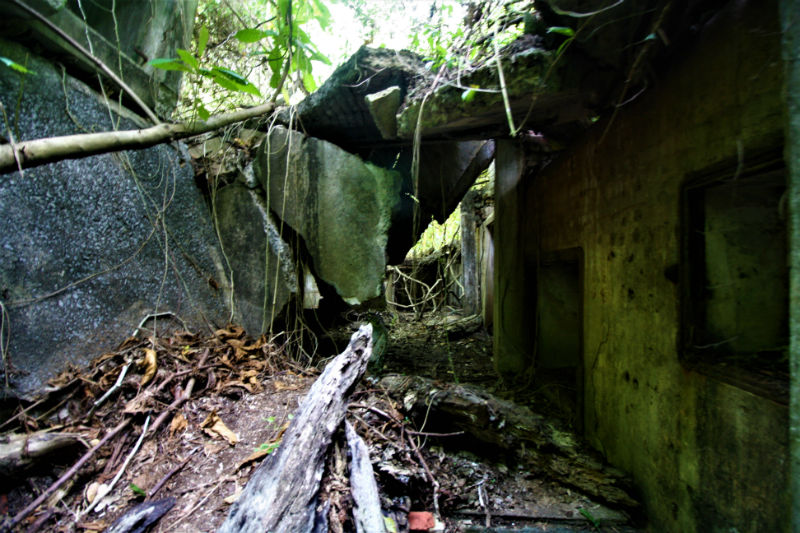 The buildings were overgrown and wild, with trees and branches strewn across the walkways and grappling with the ruins. 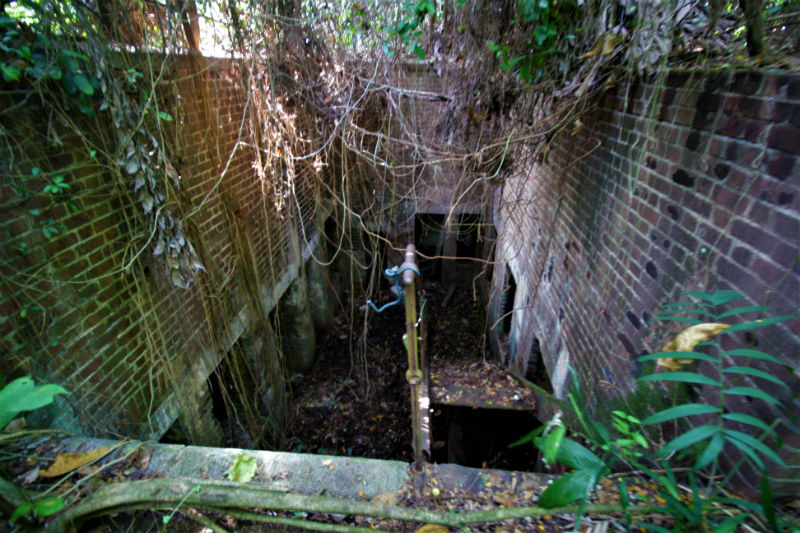 There was no way down below into the underground sections of the Fort, the buildings looked far to unstable to take the risk, while huge slabs of concrete and fallen debris littered the site. 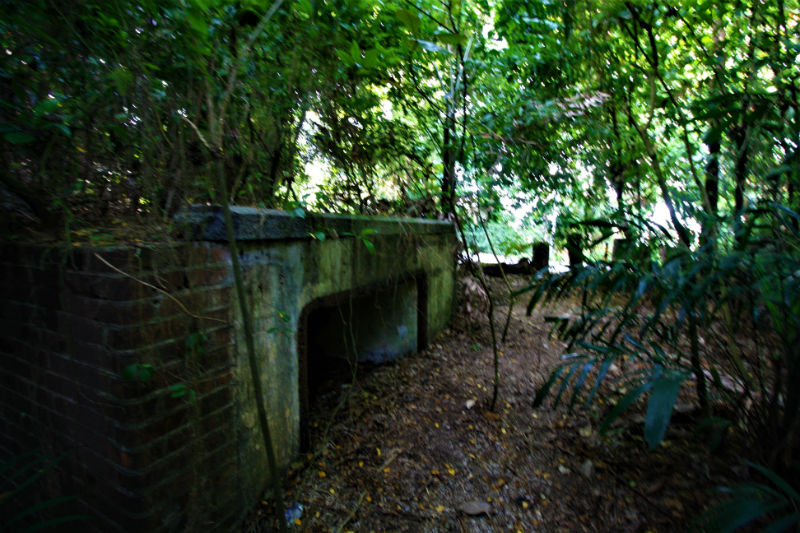 Leaving the danger of the gun emplacements I ventured further up the hill, to find more relics of the colonial past. 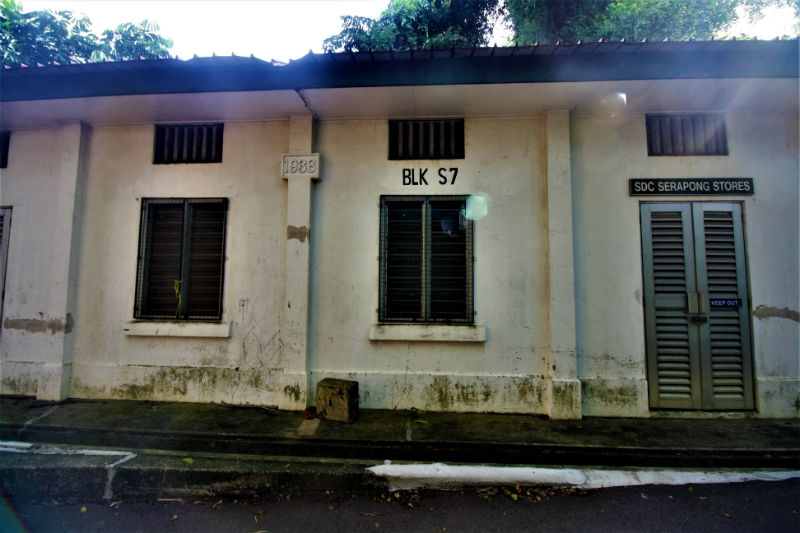 Dating back to 1936, this store house was part of the upgrades to Singapore’s defences, defences which ultimately failed to stop the Japanese invasion less than a decade later.

In the tropical humidity I hiked back down the hill, away from the ruins and towards the resorts and rides that now define Sentosa. After World War II, the forts were left to ruin, the colonial days were over, and the jungle began to reclaim this era of Singapore’s history. A little is still preserved, and delve deep enough into the vines and trees of Sentosa and you can find much more of the darker history of this Island of the Dead than you’d ever imagine by walking through the theme parks or along the beaches.