Tashkent Is a City Like No Other In Uzbekistan

It’s a huge sprawl, densely packed with drab Soviet buildings and ugly apartment blocks. Tashkent is a city that lost its history when an earthquake levelled Uzbekistan’s capital, a city that was rebuilt from the rubble in the planned, formal manner of communism. To set foot here is to be a transported a world away from the colourful, ornate cities of the Silk Road that the country is so famous for.

But this is Uzbekistan’s capital, it’s liveliest and largest city, a city painstakingly reborn from the throes of disaster, and behind the grey buildings and wide, oversized boulevards Tashkent has a life of its own. 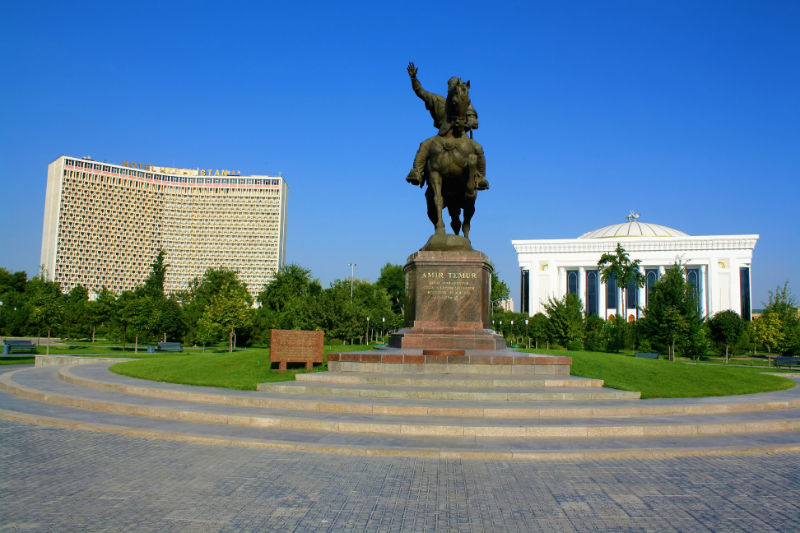 The Dive Bars Of Tashkent

In Tashkent the local Uzbeks kept giving me shots- shots of straight, cheap, Russian vodka- while the barman/supermarket checkout attendant kept piling up fresh draught beers on the table in front of me and the travellers from the hostel I was with.

The local guys were smashed already when we got here, instantly intrigued by the tourists who’d dared to venture into their dingy little kebab shop, a kebab shop which doubled as a bar and tripled as a supermarket.

The room was filled with smoke and the stale stench of alcohol mingled with the sumptuous smell of fresh Shashlik being barbecued away on a rudimentary grill in the corner.

The Best Shashlik In All Uzbekistan

Saaed, the young Tashkenter who ran the hostel around the corner that we were all staying in- and who boasted daily that his father had been a high ranking KGB General during the Soviet days- had enthusiastically recommended this dingy bar as cooking the best Shashlik in not only Tashkent, but all Uzbekistan.

And if we wanted a “real local experience” he laughed, this was the place to go.

“Just don’t get too drunk”, Saeed warned, “And call me if you get into any trouble”, he added ominously as we all left.

Shahslik is, on the face of it a very simple dish. It’s really just skewered pieces of meat- beef, lamb or chicken-barbecued over hot coals. But across the former Soviet Union, I’d tried plenty of Shashlik, and from country to country, from region to city it can vary unimaginably, even inexplicably in taste. It’s the meat, the sauces, the spices, and the little side salads and simple garnishes that can make or break the whole Shashlik experience.

It’s simple, but it is a dish of beauty when done well. 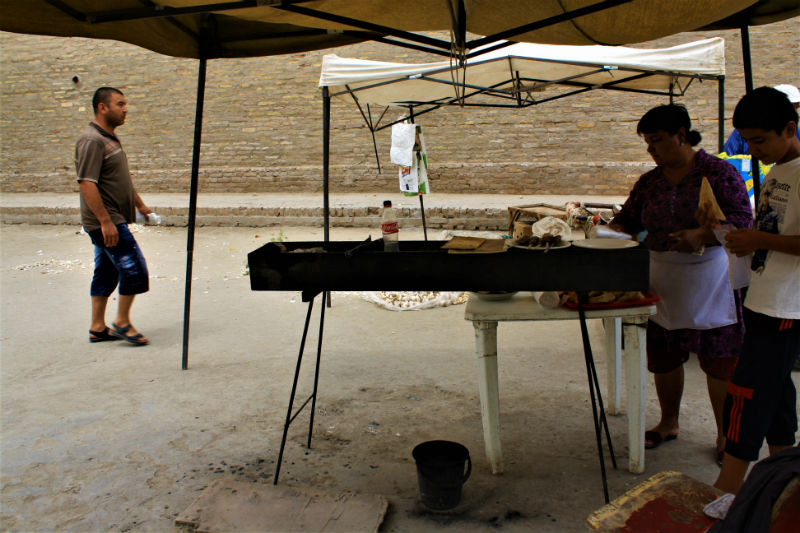 Shashlik on the BBQ in Uzbekistan

The old man cooking up our feast knew exactly what he was doing. He’d been doing this for decades, and Saaed was right, this was the best Shashlik that I’d eaten in Uzbekistan, and it was the simplest, served only with small pieces of flat bread and a plateful of onions all for less than a dollar.

Saeed wasn’t wrong about the ‘real local experience’ either. When he said to call him in the event that we landed ourselves into trouble, I assumed he’d meant a few minor language difficulties, and indeed, the first thing The Old Shashlik Chef did when we appeared in his darkened restaurant was to call Saaed to have him translate our orders over the phone.

But this was far removed from the fancier, more expensive restaurants I’d visited in the city centre. The ones catering to tourists and business lunches. This was was dark, it was loud, and the clientele were drunker and rowdier than in anywhere else I’d eaten. Trouble was very much possible, but the son of an ex-KGB General was always going to be the best solution to any problem in Tashkent, that much I knew already.

As we sat down, draught beers on the table while waiting for the Shashlik to grill, one of the drunk guys at the end of the room stood up, a bottle of half finished vodka in one hand, swayed slightly as he found his balanced, then stumbled gracefully over to us, red eyed and bleary while scratching menacingly at his throat.

What looked like the mad gesture of a violent drunk was actually the ‘friendly’ gesture I’d seen across the former Soviet Union offering a drink, or asking for one, or asking if you’re drunk. It takes some getting used too.

He slammed the bottle down on the table, shouted “Vodka!”, then proceeded to offer shots of this fierce firewater out to all of us.

A ragged cheer echoed around the room as we shotted back the cheap vodka, before the guy who’d been pouring out more than generous quantities suddenly shouted “Rooney! Rooney! Manchester!” when he realised that some of us were from “Anglia!”, from England.

Then the rest of the room joined in, shouting out their favourite football teams and players. None of us spoke Uzbek or Russian, and none of the locals spoke English, but as always in the world, we communicated gloriously through the bi-lingual language of booze and football.

The Language of Tashkent

I’d spent most of that day talking football with eager Tashkenters- not that I profess to know anything much at all about the sport in reality- with young students practising their English with me on the metro system and to the bored soldiers and police guarding the metro.

In Tashkent, you can spend entire days simply travelling the underground, riding the trains and talking with the locals. It really is a thing of beauty. And it’s a work of art too.

Each station is intricately designed, intricately decorated with unique themes and motifs from Uzbek and Soviet history. It’s very communist of course, lavish in its triumphs and outrageous in its decor promoting the glories and achievements of communism beneath the city of Tashkent.

Tashkent is one of the most heavily policed cities in the world. The security presence is everywhere, and especially so on the metro. The government of Uzbekstan likes to keep things under control, it likes to know everything, and this means that for a traveller, simply traversing the metro from one station to another will inevitably result in several bag searches and numerous passport and visa verification’s. It gets tedious. Especially if you’re just taking the metro down the line one station. And not just on the traveller and the locals, but on the bored police standing there for hours on end each day.

So as a foreigner I intrigued these valiant metro guards. Each time they would flick through my passport, looking at the stamps and laughing at the pictures before talking about Rooney- he was big in Tashkent- and moving the conversation to football before waving me through after an energetic, broken talk about Manchester United or Barcelona.

At times it can feel like there are more police than locals in the city. Passing through, it’s easy to put up with the checks for a few days, but living here would surely make daily life tiring. But Saaed, the ever knowledgeable hostel worker and claimed son of an ex-KGB General told me that he believed all the police, the stringent government checks and laws, were all absolutely necessary for state security. It was better than having bombs going off all the time he said bluntly. Whether the security was necessary or just an excuse for the ever reaching government to keep control of people, I’ll never really know, but for good or bad, with the huge police presence, Tashkent is an incredibly safe city to travel around.

The Son Of An Ex-KGB General

For the most part anyway… for there was no security in the dingy dive bar supermarket with the raucous drunks.

Intermittently, these drunks would stand up brashly and begin shouting at one another before falling into awkward hugs and fits of laughter. The beers kept flowing, vodka was poured and endless Shashlik were devoured.

The drunk locals were friendly enough- it was the weekend- and they would pose for hazy selfies and forceful embraces with their new foreign friends.

But as eyes became redder and the smoke thickened everyone became increasingly unsteady and with the language barriers, unpredictable. One of the drunker Uzbek guys kept attempting to stand- a trialling endeavour for him- saying something in mumbled Uzbek before his more sober friends pushed him back down again and poured him another shot.

Soon enough they were dragging him out, only for him to stumble back in a few minutes later on his own to ask us tourists in broken drunken words for 10 Dollars while making half threatening gestures. His friends found this all rather amusing- he was harmless enough in his state- but immediately The Old Shashlik Chef was on his phone, and Saaed soon came charging into the bar, shouting in Uzbek at the drunk. Maybe this was the trouble Saaed had ominously warned us of earlier.

The other locals all stood up quickly, six of them menacingly facing off to Saaed while I watched confused from the table, not understanding a word of the loud exchange. But Saaed had quickly silenced them all with a calm, yet powerful tone, and the locals all returned to their seats before bringing us over more vodka and dragging their friend out of the bar. 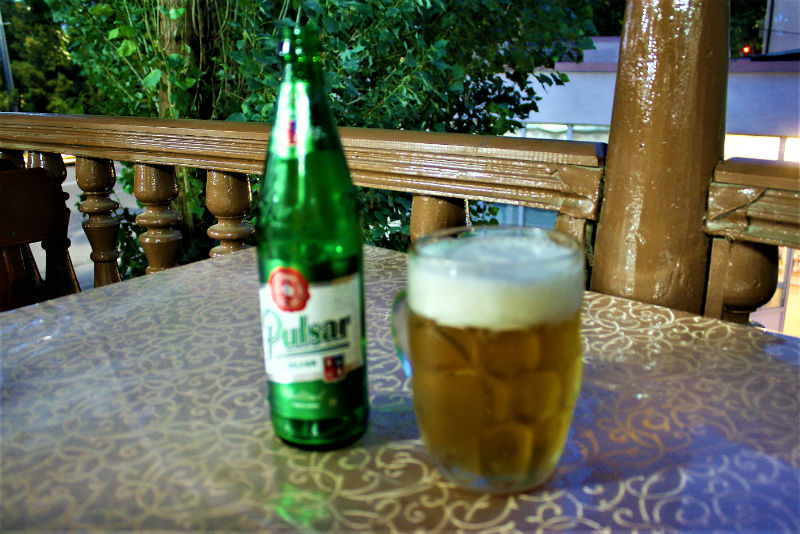 “I told you not to get into any trouble…”

Saaed just said simply and disapprovingly, “I told you not to get into any trouble…”

“What did you say to them?” I asked, still confused as to what sort of trouble we had been in and how it had even come about, wondering if perhaps Saaed’s over zealous entrance had in fact been the cause of it all anyway.

“It doesn’t matter”, he said. “But don’t worry, there won’t be anymore trouble here tonight”.

And with that he strolled out into the night, returning to his business at the hostel as quickly as he had appeared, leaving us with more Shashlik to eat and more beer to drink in the company of the now even friendlier locals.

We stayed until closing, then stumbled out with the Uzbeks onto the streets for some heartfelt, boozy goodbyes and parting selfies. The Uzbeks went one way, chanting “Rooney! Rooney!” into the night, and we tourists headed back to Saaed at the hostel, wondering if perhaps his father really had been a high ranking KGB General after all.