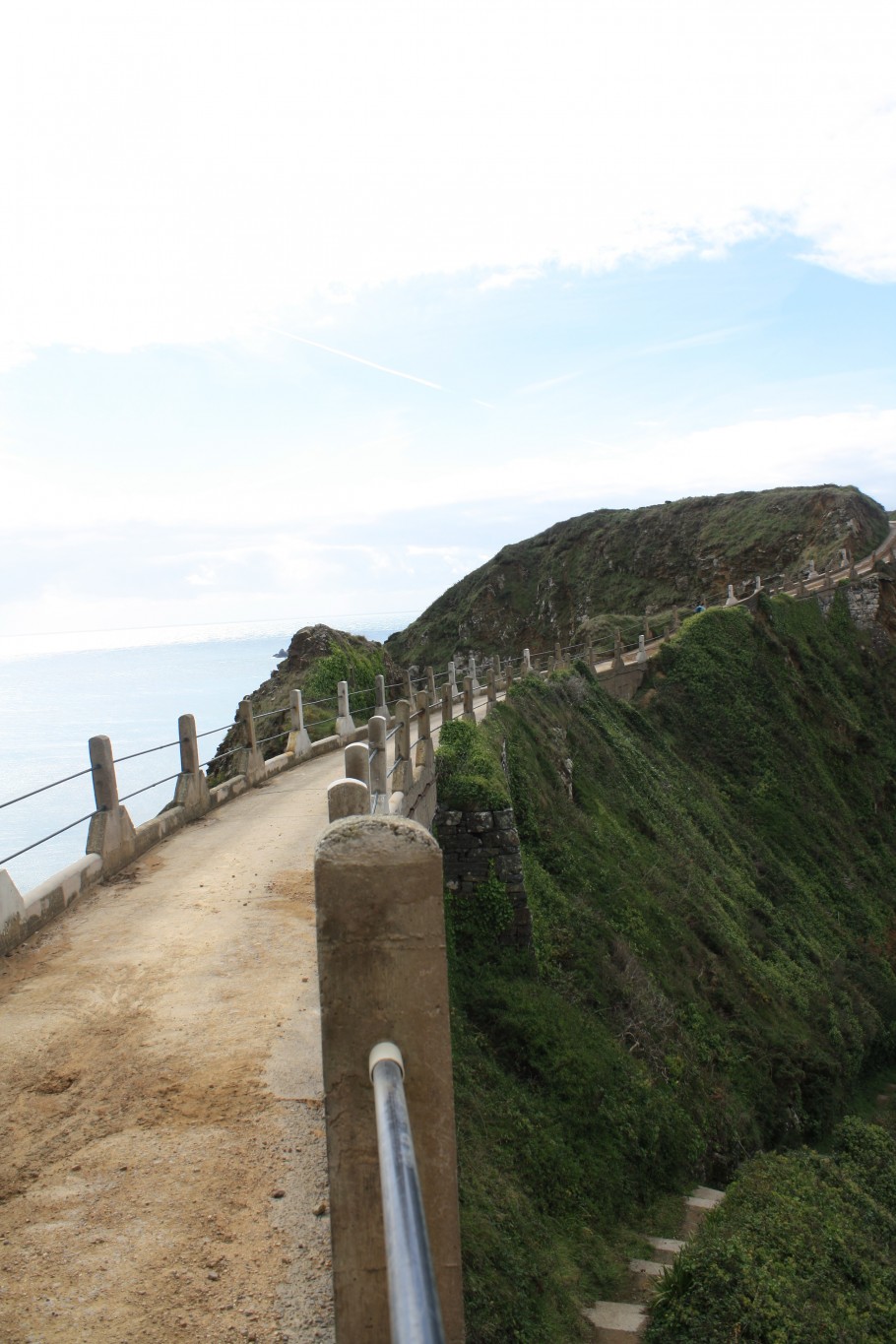 ‘Welcome to Sark’- the sign read as I climbed the harbour steps onto the island. 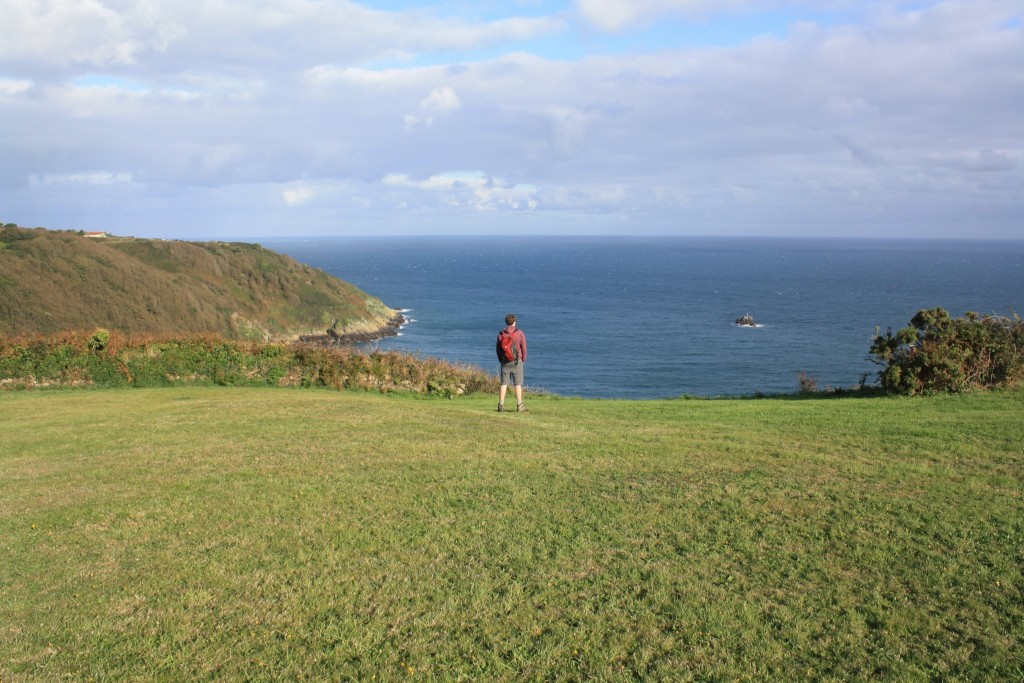 With rain lashing down, I ran through a short tunnel carved through the rock of the cliff- the only entrance to the island- and on the other side found a farming tractor, carriage in tow, parking up on the side of the road. ‘There’s the bus!’ someone said, and everyone clambered on for the ride up the hill. 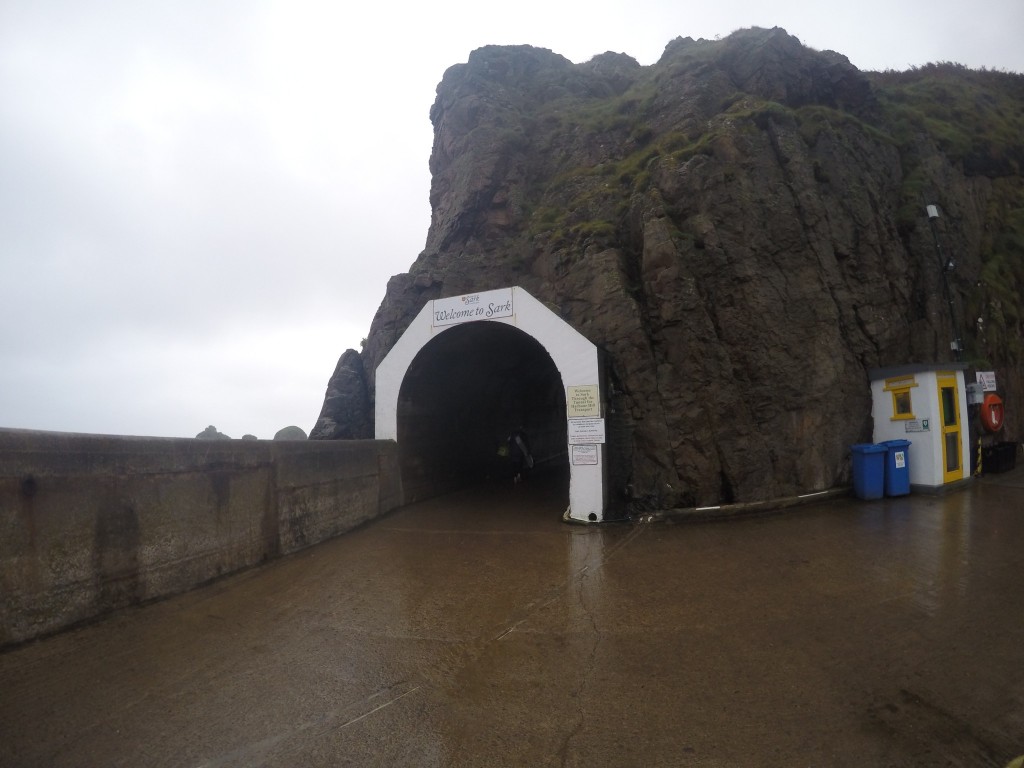 This was Sark, an island of only a few square miles of rocky land in the English Channel- a place where cars are illegal, street lamps are non existent and where life and time have both meandered to a pleasant standstill. 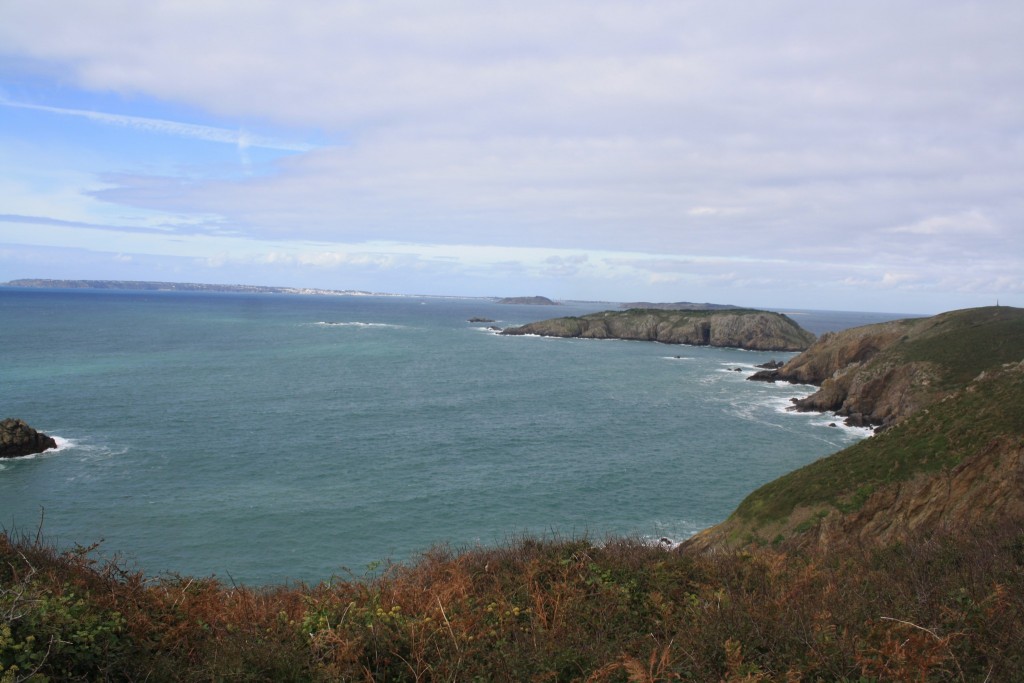 Being Europe’s last remaining medieval fiefdom I wasn’t sure what exactly the island would have in store for me. Would this be a land of over worked serfs, toiling away in the fields to scrape a few vegetables from the ground while the Lord of the Manor resided over their peasant kingdom in a lavishly tyrannical fashion? Or would it simply be quiet life as usual in a quintessential British village, one that just happened to be tied to a few crazy old laws and was miles away from anything else at all? As it turned out, Sark’s isolation would prove to be the source its very particular magnificence. 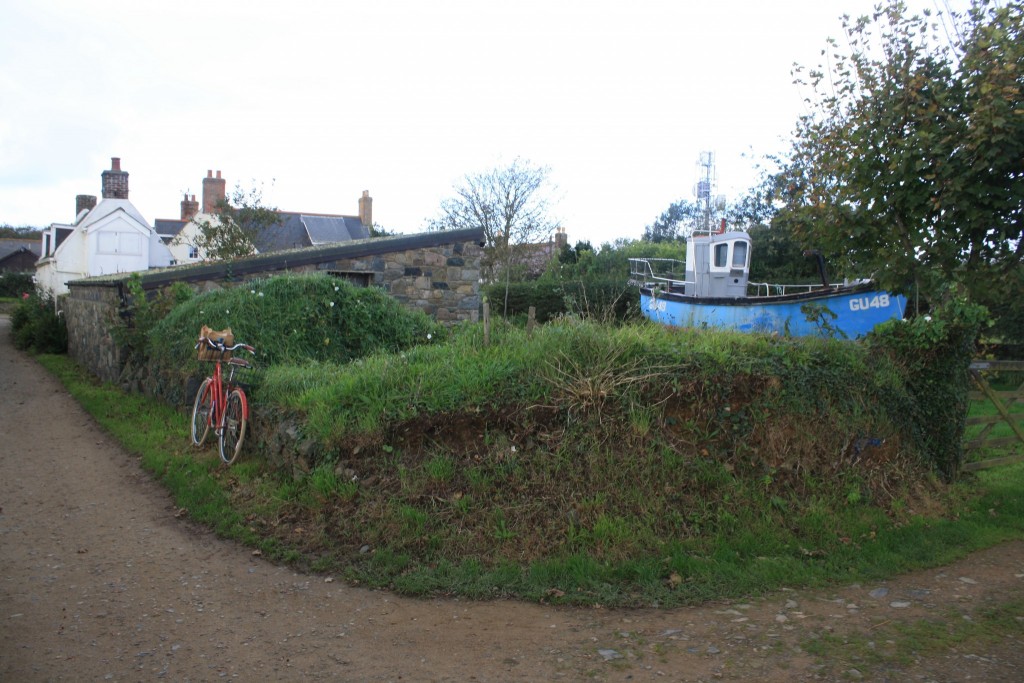 The carriage barely protected us from the rain as it slowly hauled us from the ferry harbour, up the imaginatively named ‘Harbour Hill’, to the island’s main street- ‘The Avenue’. Except the tractor bus, or ‘The Harbour Hill Transport’ as it is officially called, only actually went as far as the first pub before the driver called it a day and pulled over. From here there was another short hill to trudge up before I was on Sark’s high street. 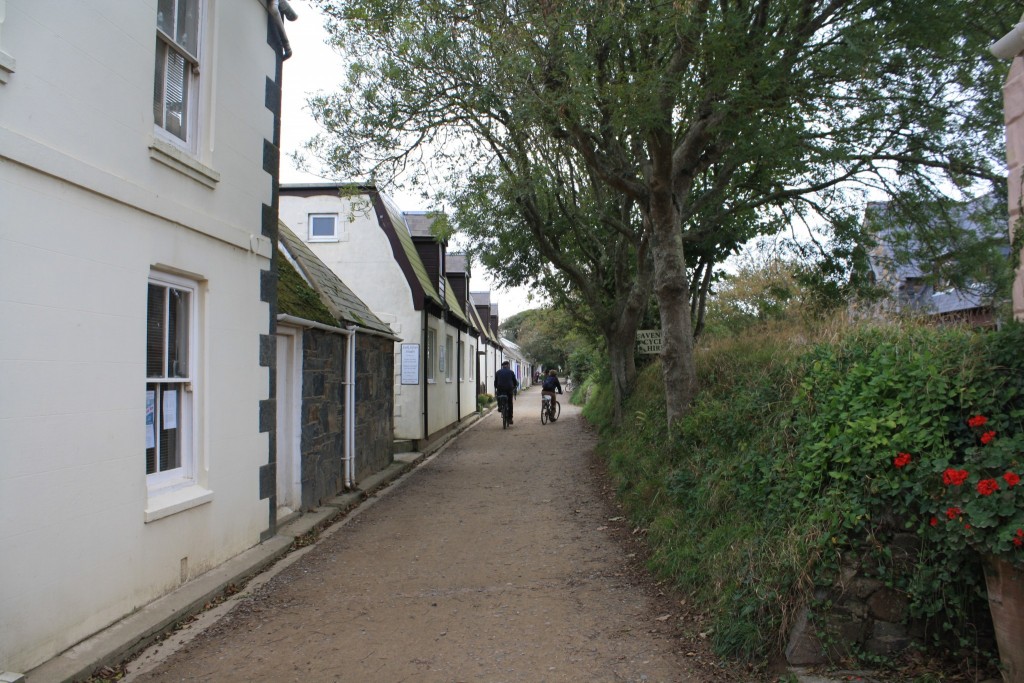 Sark is part of the Channel Island’s predominantly self governing ‘Bailiwick’s’. Nominally it is part of the United Kingdom, but realistically it’s a world apart. Being closer to France, place names are in a local dialect descended from the Old Norman language, as when William the Conqueror, Duke of Normandy, conquered England, he brought the islands with him. And they’ve stayed loyal to the Crown ever since. 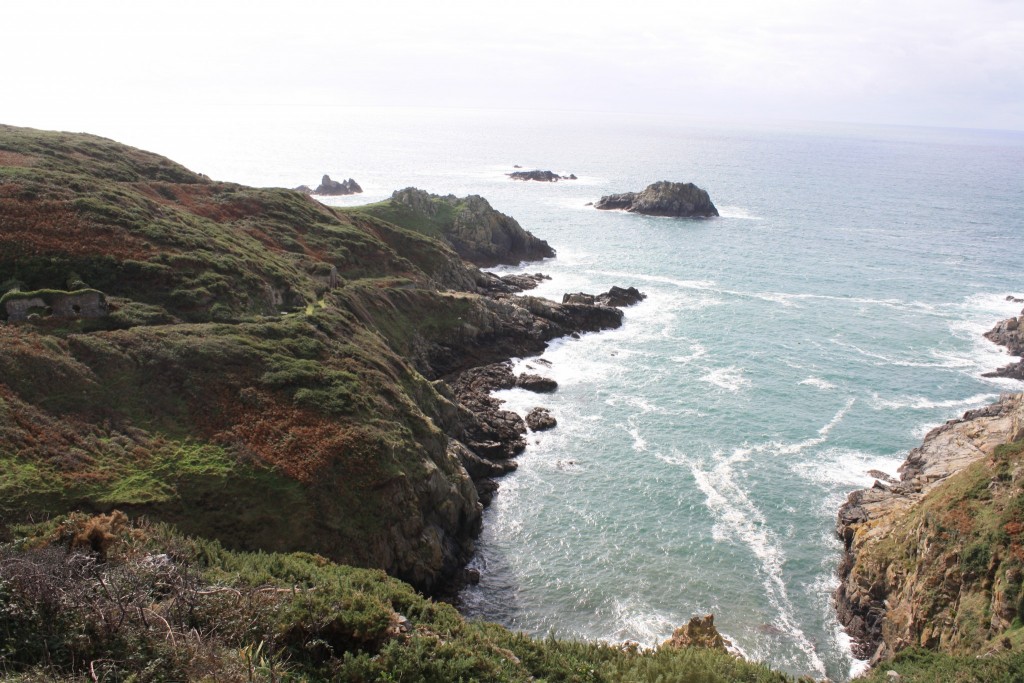 I’d arrived from Guernsey- the closest large habitation- a journey of around an hour, in what were incredibly rough seas. The small ferry was rocking up and down with the waves as it was steered through rocks and swells that must have been the downfall of many a Captain over the years. With no airports, this was the only way in or out. The Sark Shipping Company runs this integral lifeline- the name alone enough to make me feel as if we were being smuggled across dire straits to an obscure, unknown island on the periphery of the known world. 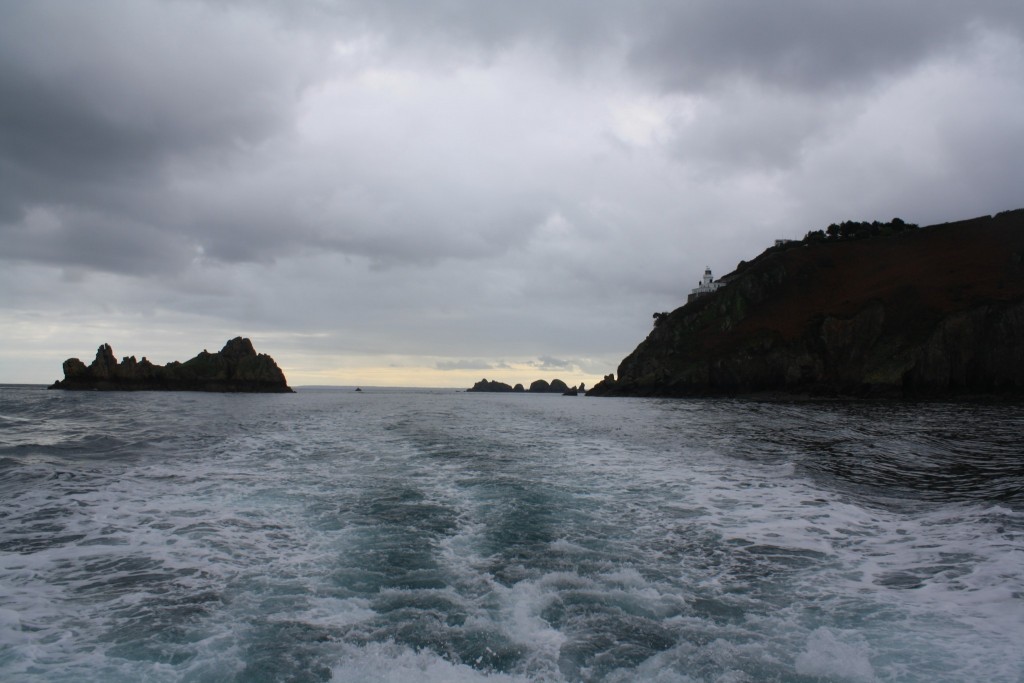 Being run on a feudal system means that all the land is essentially leased out in parcels to locals. But these days a local government runs things and moves are being made to more democratic procedures of law. Still, Sark is not a member of the European Union and if you visit, you won’t be covered by the NHS like the rest of the United Kingdom. They are as autonomous as you can get really- without breaking off to form an independent nation. 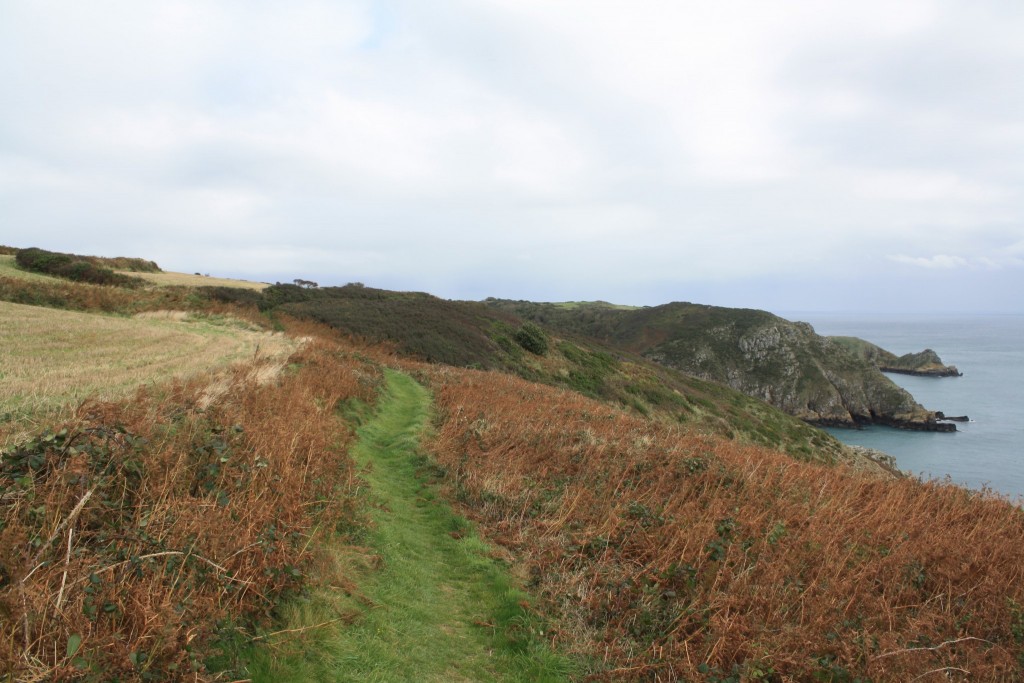 Waiting at the top of Harbour Hill were a fleet of rustic carts powered by the indomitable animal that is the horse. Local driver’s were ready to take visitor’s on tours around the island, which given the small scale of the coastline would only take a few hours at a leisurely pace. 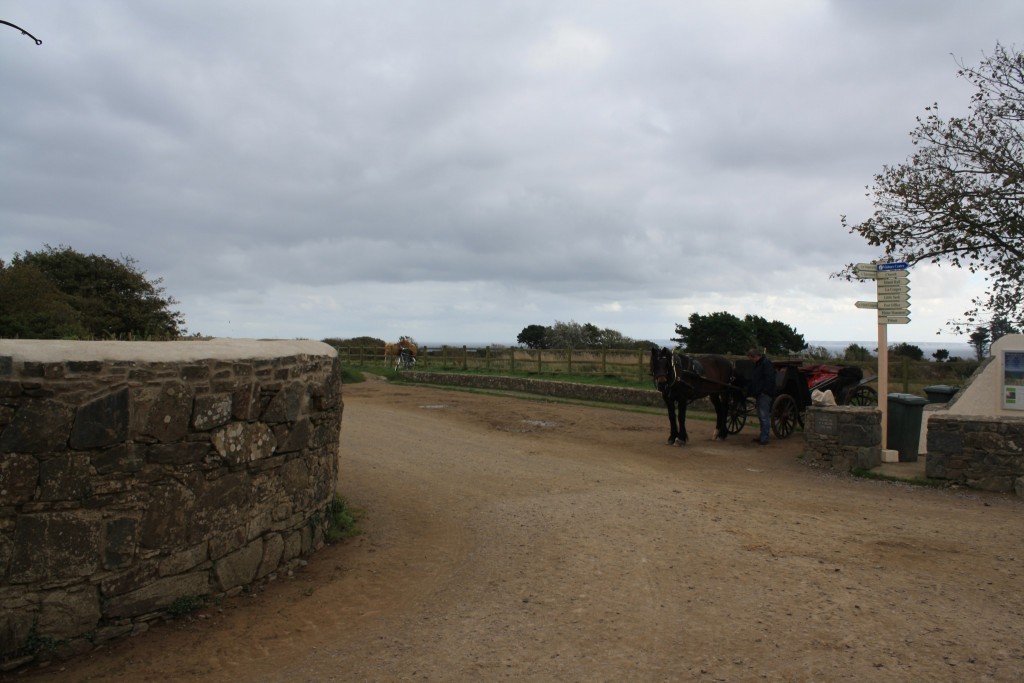 I headed off to my camping spot though- La Vallette Camp Site– to pitch up tent in the rain and wind. 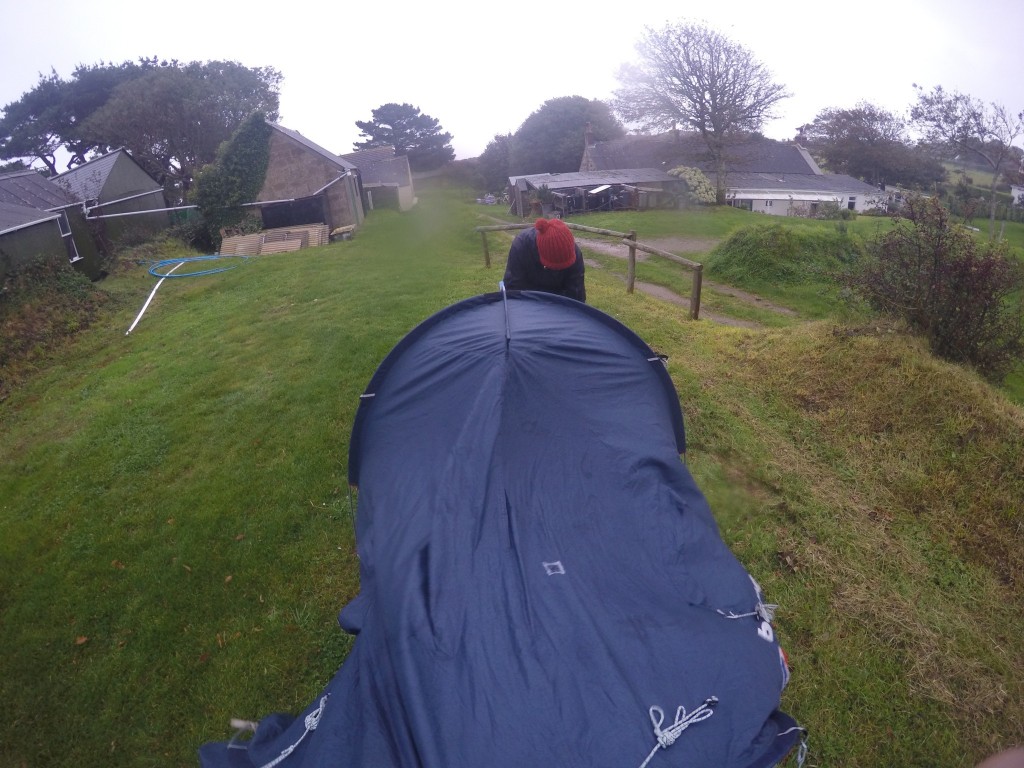 Walking past the high street, Sark has all the usual trappings of modern life, a HSBC bank, a shop stocking essential Waitrose produce and plenty of restaurants and bistros. The Post Office even has a gold painted post box outside, a dedication to the gold medal win of Mr Carl Hester in the Dressage event of London’s 2012 Olympic Games. The main road though was just a dirt track, and the only thing to listen out for was the ping of a bicycle bell or the slow rumble of a tractor. 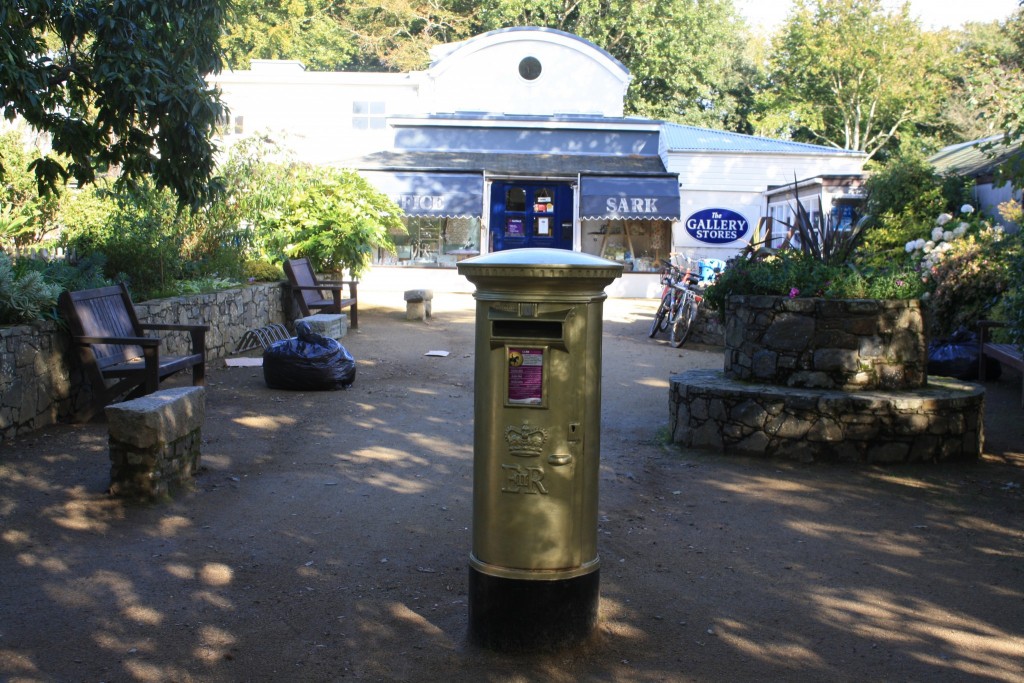 At the camp site we set up our home for the stay on the grassy top of the cliffs which overlooked the harbour. The view wasn’t at all terrible to wake up to each morning either. During the night though, the winds and rain that came howling in from the sea shook our tent right down to the pegs that were holding it to the ground- a reminder of the harsh conditions that surround this exposed island. 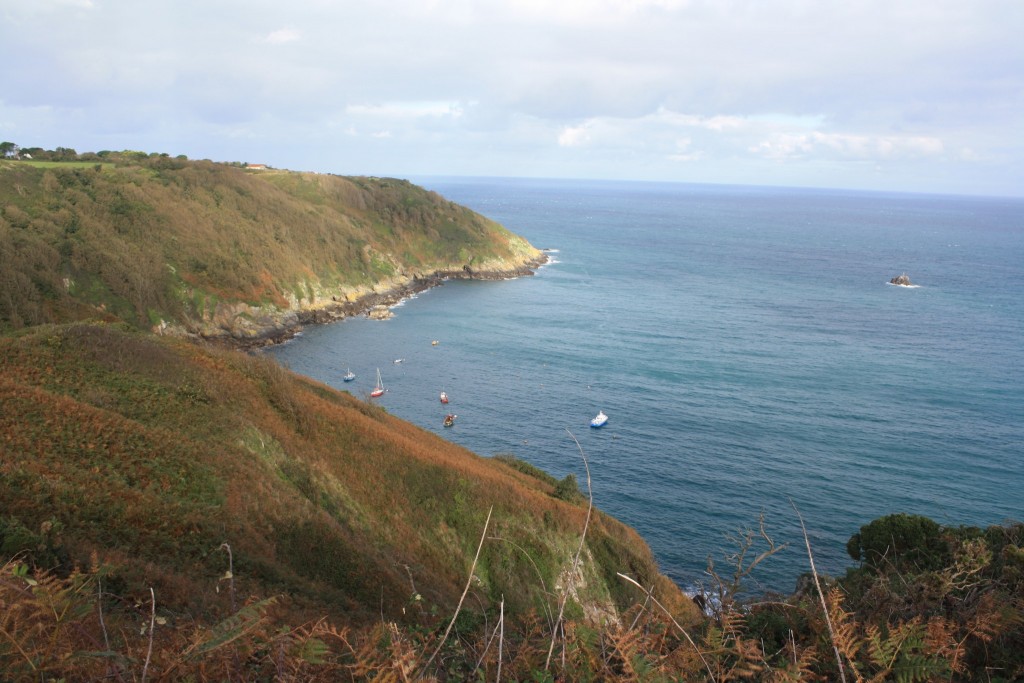 Later we learnt that Jimmy’s Carting Service- a local business venture which imports absolutely anything from Ikea furniture to Argos toys- would have brought our bags from the boat to the camp for a small fee. Around the island I would see Jimmy’s fleet of tractors hauling their loads along the roads daily. 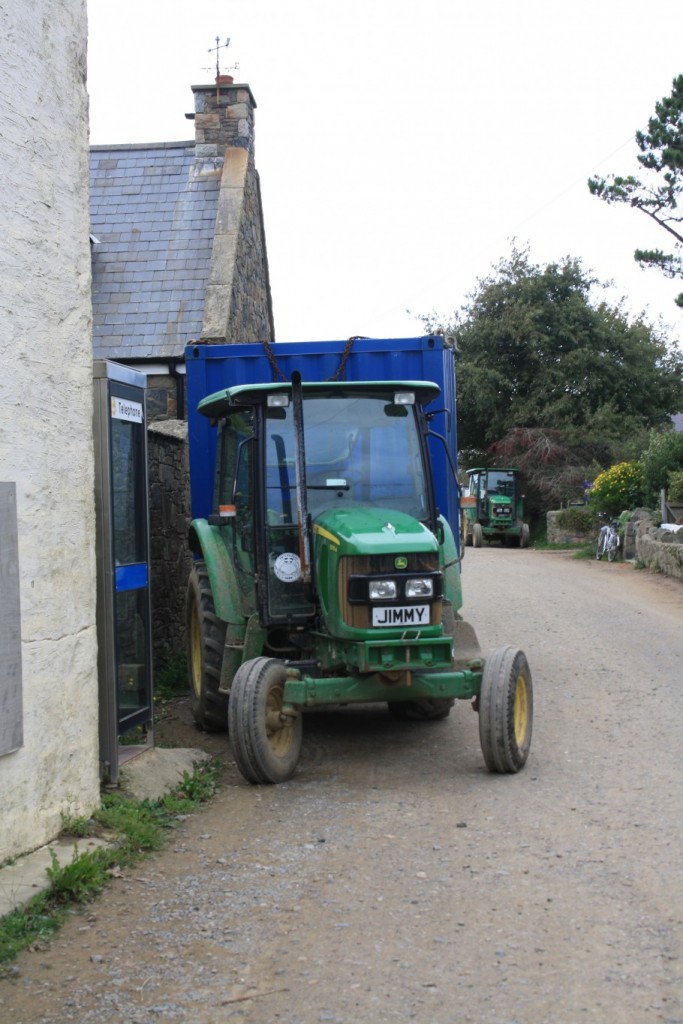 The only street light I came across on the entirety of the island was outside the Mermaid Tavern- a drinking establishment on the road down to the camp site. It seemed though that its main purpose was to illuminate the whereabouts of the tavern itself. You are never too far from a drink at any rate on Sark. We were heading to a local pub quiz night at the School, which also doubled as a restaurant, cafe, bar and general place for anything really. In what was a tricky quiz, our team of 2 mainlanders was mercilessly trounced in the general knowledge department by the residents of Sark. I suppose though that if you live on a 2 mile wide island you have plenty of time to watch Frozen and learn all the names of the Thunderbirds. 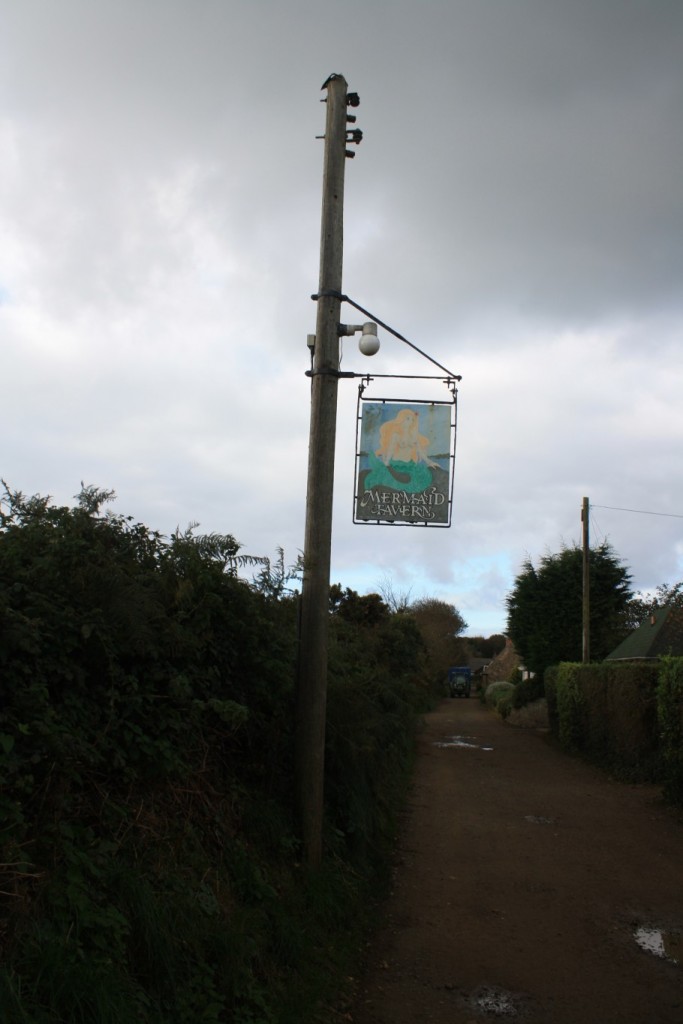 We made our way on foot across the island the following day, following the easy trails of the local footpath network, through fields and vineyards to the beach at Dixcart Bay. We hiked down the steep cliff side to find that we had the entirety of the beach to ourselves. There wasn’t a soul in sight as the waves of the English Channel crashed into the rocks of Sark. 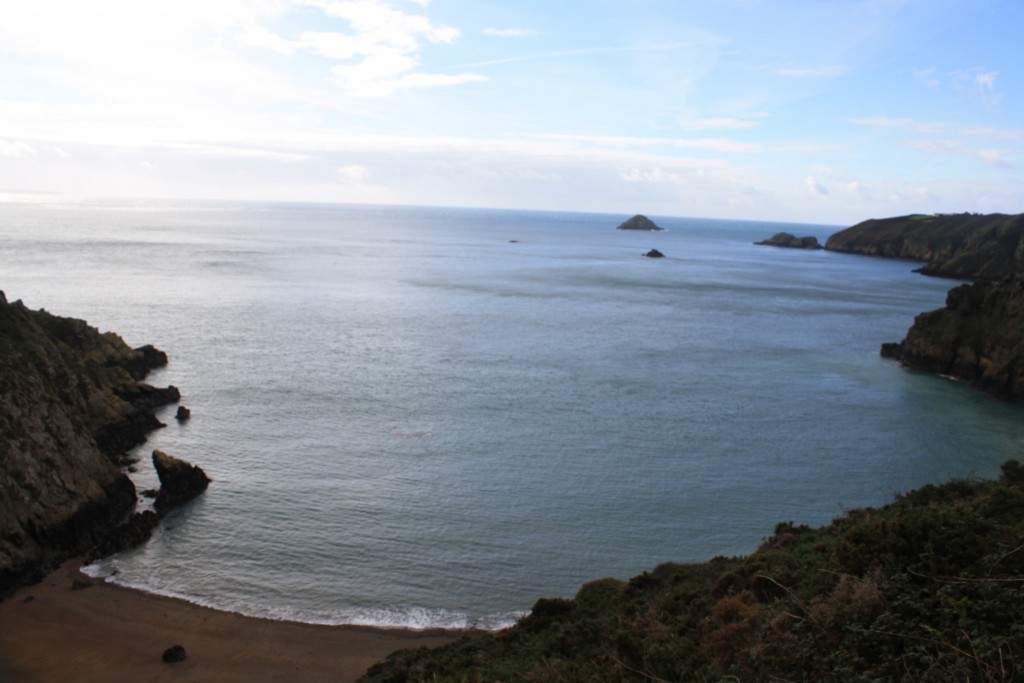 Sark has a resident population of around 600. Most call the main island home, but a few also live on Little Sark, a small outcrop of land which is only accessible by taking a narrow bridge across the gorge that separates it from the larger Sark. 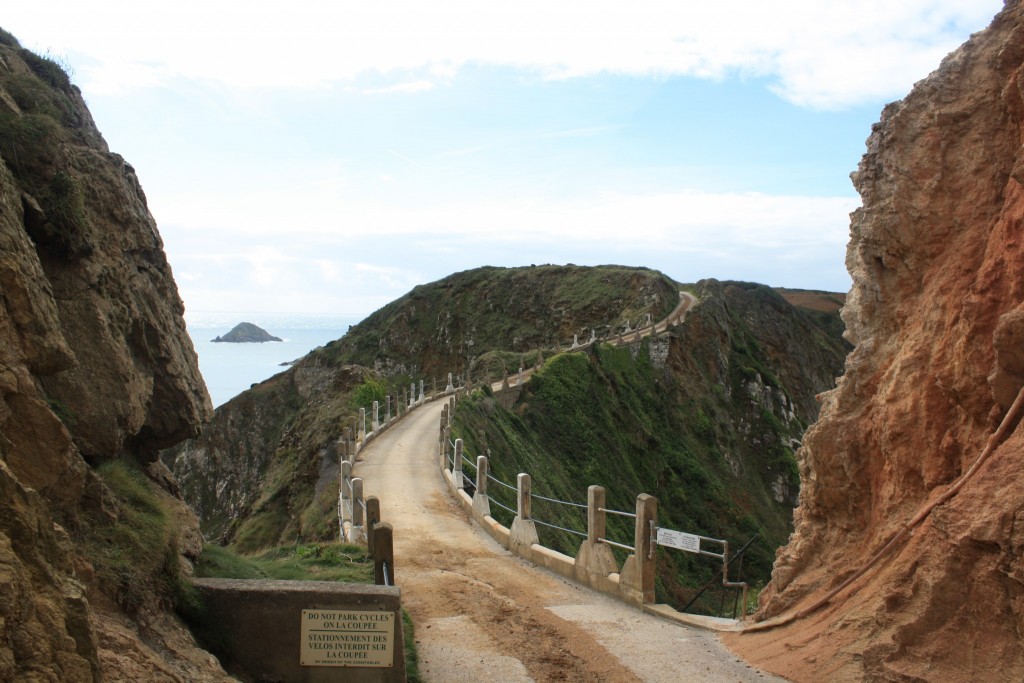 The bridge, or La Coupee, was built after the German Occupation of World War II. Along with the rest of the Channel Islands, Sark was some of the only British soil to be occupied by the Nazis. 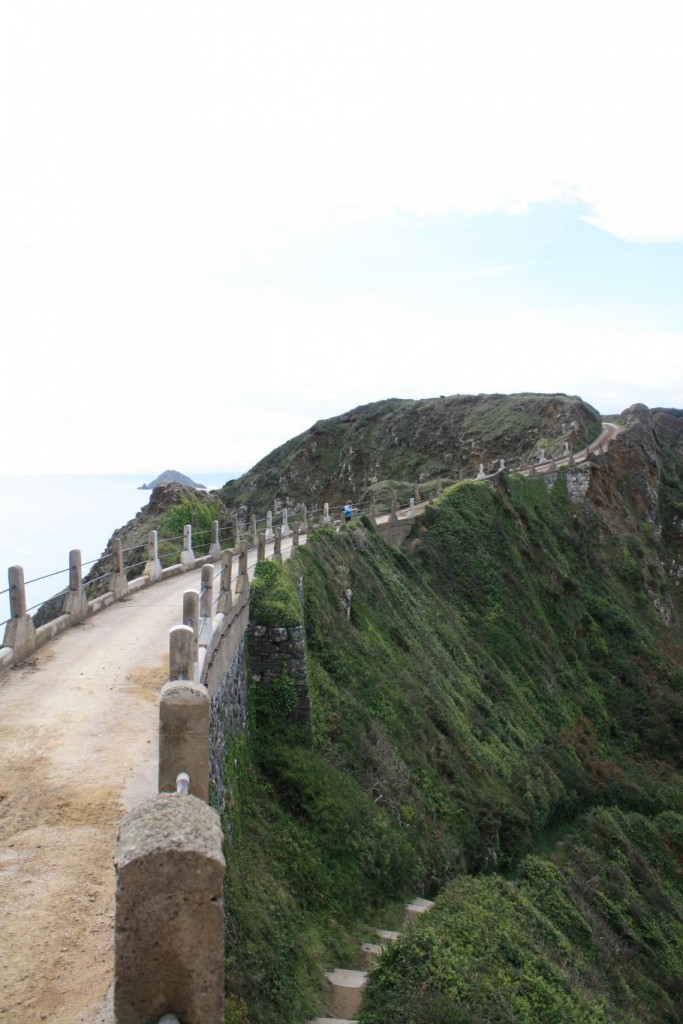 After the surrender in 1945, the British made the German prisoners of war build this dangerous piece of engineering to link the islands. It might be slightly nerve racking looking over the edge to the sheer drop beneath, but the tractors have no problem taking it on at full speed. 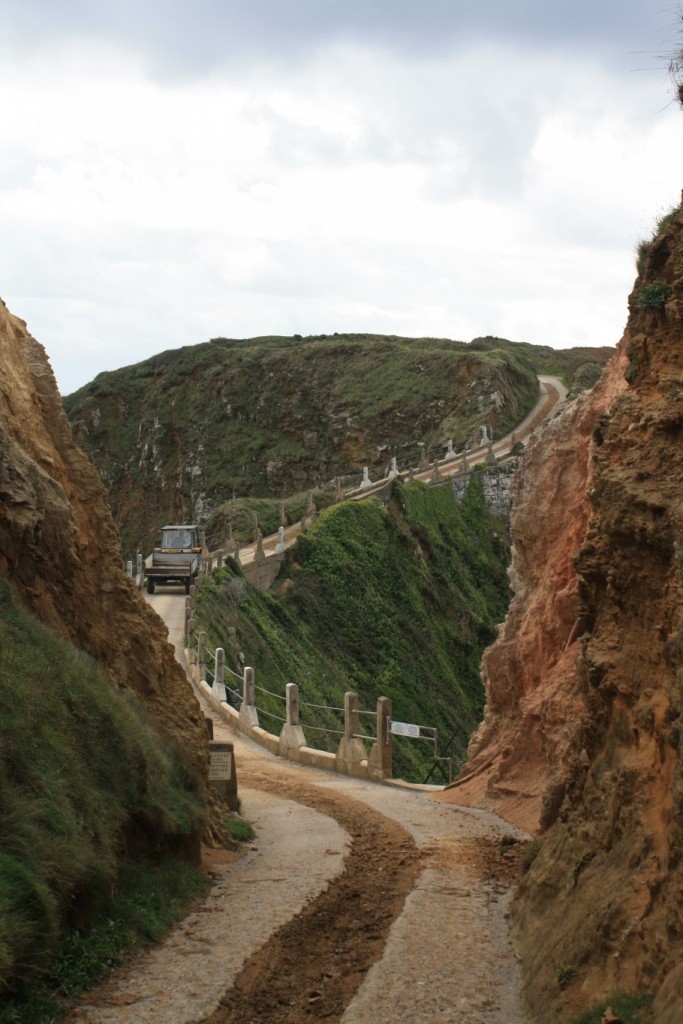 The entire island is easily traversable in a day, be it by horse and cart, on bike or just on foot. But that doesn’t mean that it isn’t worth staying for much, much longer. Rugged rocks line the coast while inland is a green, pastoral landscape. Undisturbed by the traffic and noise of any normal British town- even the Doctor and Fire Fighters have specially equipped tractors- Sark is a refreshingly peaceful retreat. The locals have taken the best of modernity- they may be geographically isolated, but as with anywhere they are still connected globally- and yet they have still kept the slow pace of rural life that has been lost elsewhere. 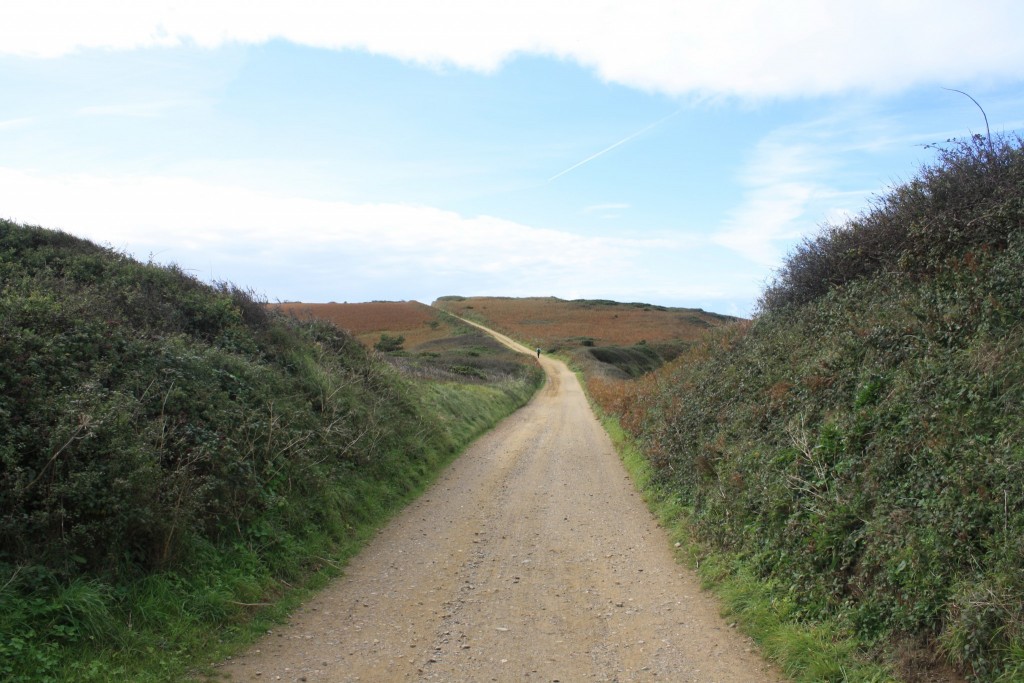 As we left Sark, we had a look in the window of the local estate agent- a local chap walking past asked us cheerily: “Are you buying, selling or dreaming?” For now it would just be the dreaming. 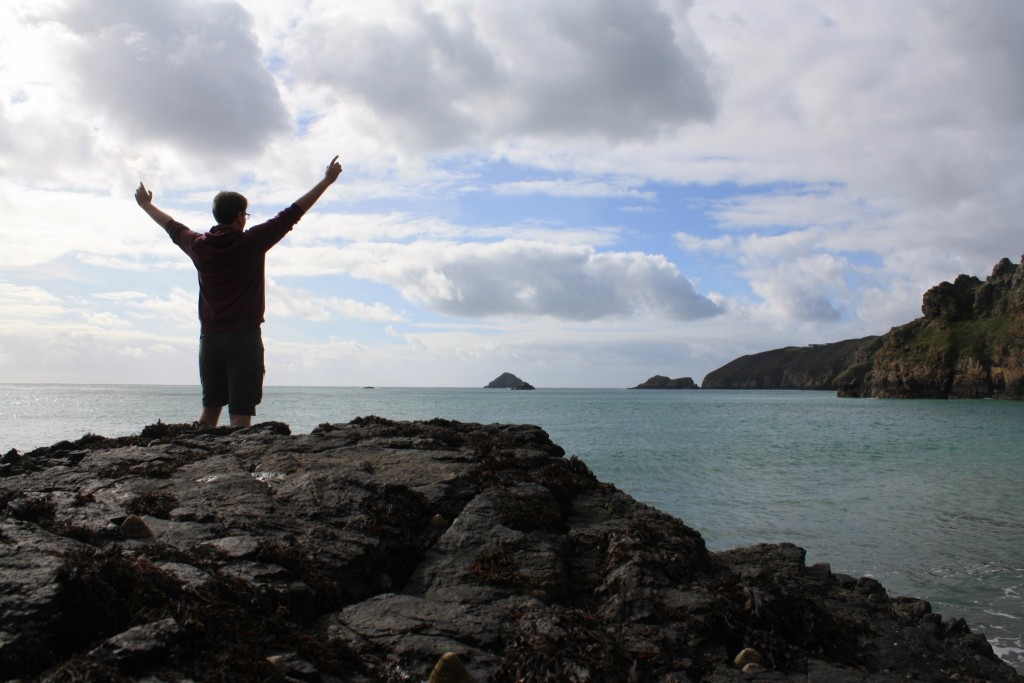 Fancy visiting? You can find out more practical information on the Island’s Official Website!

For crossing times then visit the Sark Shipping Company for details.

How To Travel To The Island Of Sark!

Photo From The Road: Things I Saw In The Channel Islands